Our plan was to fly in to Narita International Airport and drive into Tokyo to meet a friend for lunch. After the meetup we would drive east to Lake Yamanaka located at the base of Mount Fuji where I had reserved a twin room at a Mitfuji Hotel for the night. The expected distance of travel for the day was about 193 km. Picking up a Mobile Router at the Airport

I had reserved and paid for the rental of a mobile router (75Mbps LTE) from Japan-wireless for 15 days at ¥9600, inclusive of postage and insurance. I had requested to pick up the router at the Narita International Airport Terminal 1 post office. Japan-wireless was not a national telco like NTT Cocomo and Softbank,  it was a new company of about a year old, so I was a bit apprehensive in using its services. Being a new company it did not have many reviews about its mobile data services on the internet.  I did see one good comment about its services so I decided to take a risk and rent a mobile router from them. Of course the main attraction in using the company was its low rental rates. The negative side was that the moment I made the online reservation I had to make full payment. On its website it was stated that if I was to cancel my reservation before their shipping date which was about three days before pickup I would be fully refunded. This was not much of a consolation as I placed my reservation some three weeks in advance and paying full to a relatively new company before I even pickup the device made me felt very uncomfortable.

Our plane touched down at Narita International Airport Terminal 1 on time at 7.45am. It took just a short while for us to pick up our luggage and exit custom. We took the elevator to the Post Office on the 4th floor that had just opened for business. It operating hours was 8.30 am to 10 pm which was just right for us. Picking up the mobile router was a breeze, I just had to give the post office staff my name and show her my passport and she handed a big envelop package to me. 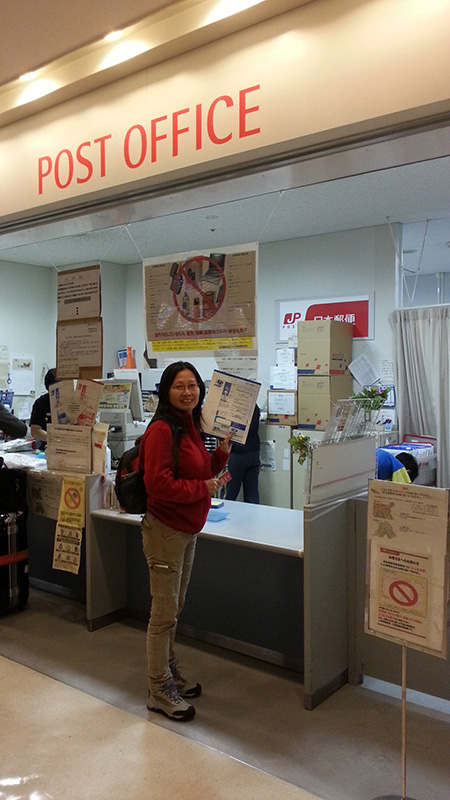 Picking up the mobile router at Narita Airport Post Office

We found a place to sit down and following the instruction in the package we easily activated the mobile router and connected our mobile phones to it.

With internet service 24/7 I felt very much at ease. With Google Map to supplement the rental car GPS I was confident that I would not get lost. With Google translate I was sure we would get by in Japan without knowing the Japanese language. With social media we could keep in constant contact with our family back at home so less worries on both sides.

Pick up the rental car

We went down to the 1st level of the of terminal 1 and located the Nissan Car Rental company. Once we completed the necessary paper work we were led to our rental car that was just parked outside the building. The car looked new and clean and well polished. We walked round the car and scrutinised it for scratches and insisted that the staff documented every tiny scratch. From our bad experience in Korea we learnt that to avoid dispute when we returned the car, we should always take the time to carefully inspect the car for dents and scratches and had them documented before taking over the car. 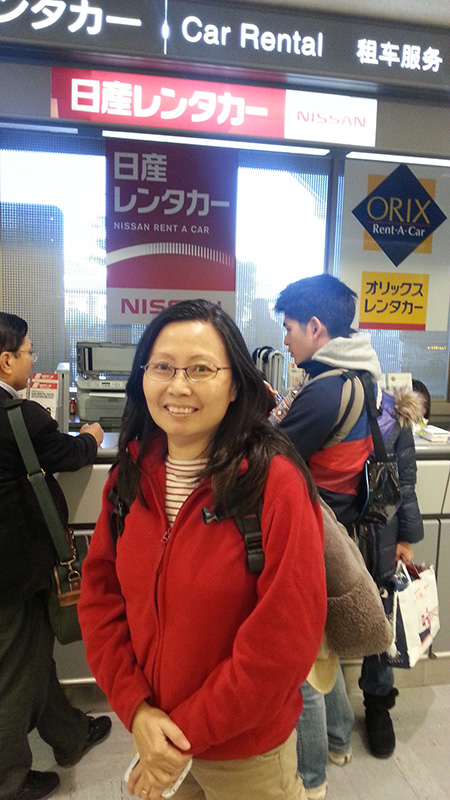 Waiting to pick up our Nissan Rental Car

After inspecting the car we got the Nissan staff to guide us step by step on how to use the “English” GPS. The “English” GPS was actually partially “English”. Almost everything were in English, such as menu options and voice navigation. The display (map) was in Japanese with Japanese road name.

When I reserved the car online at Nissan website a couple of months ago, the Nissan staff was very helpful, he explained that since I did not understand Japanese, the best way to use the “English” GPS was to use postal code, telephone number or mapcode. Telephone number and mapcode were most precise when locating a destination. Mapcode had the advantage when visiting nature environment where there was no establishment so no phone number was available.Postal code pointed to a wider area so the GPS would not bring us to the desired destination. So with that advise I had already compiled a list of mapcodes and telephone numbers we needed for all the destinations we intended to visit. Mapcodes were identified using www.viajar.jp website. Though the website was in Japanese I could activate the browser Japanese to English translation and had no problem navigating the website.

Driving into Tokyo was not as smooth as we hoped, we made a couple of wrong turns and ended up an hour late for our lunch appointment at Tokyo SkyTree. It took us a while to get use to the GPS instructions and Japanese roads. There were many times the GPS voice instruction told us to turn but we did not because we could not see the road to turn into. The road was actually there but because it looked like a back alley or a walking lane rather than a road so we kept missing it. There was also a road diversion that was not captured by the GPS so we ended up into a wrong road, luckily we had Google Map as a backup alternative.

When we were near to the SkyTree, it took us a while to find a place to park our car. We found this carpark with two carpark spaces. From the signboard we understood the parking rates which was ¥200 per 12 minutes. After parking the car in the lot, we went to the machine to made a payment but unfortunately we did not fully understand the instruction so we just put in an amount of ¥200. We walked to the SkyTree to meet our friend for lunch. 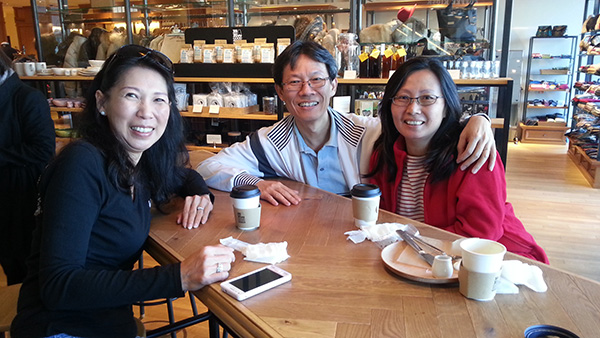 Tea at a Cafe in SkyTree mall

While chatting with our friend about the automated parking system we found out we only make the payment when we were about to drive off the car. 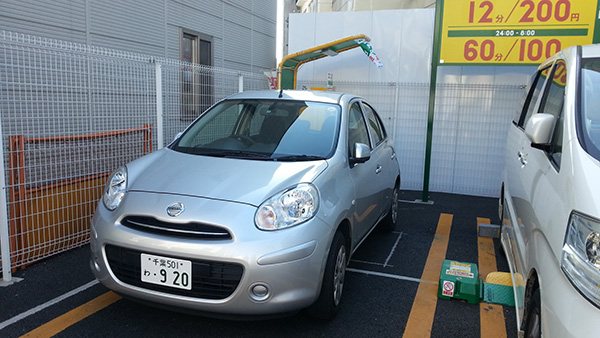 Basically after parking the car in a lot, a barrier below the car between the front and back wheels would automatically pop up five minutes later. This barrier would make it impossible for the driver to drive out the car without making payment.
The payment machine when activated would calculate the

amount owed and after the driver made the payment the barrier below the car would retract and the driver could then drive out  the car.Lake Yamanaka. We arrived at Lake Yamanaka at about 3.30pm and the sun was about to set. In autumn sunset took place at about 4pm  and by about  4.30pm the whole place would have turned dark. Unfortunately the sky was too cloudy so we could not see the “Diamond” which was the setting sun. Mt Fuji was also half covered by cloud. From November to February the setting sun would look like a bright brillant diamond as it set right over the top of Mt Fuji tip. 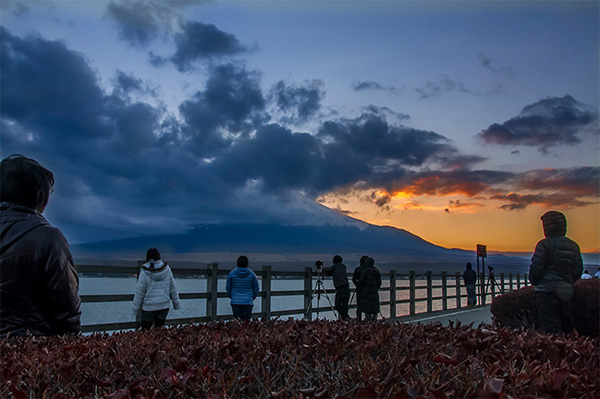 Mount Fuji as seen from Lake Yamanaka on a cloudy day

Looking out onto the lake we saw some boating activities, there was a cruise boat that looked like a duck sailing across the lake, a couple of small sail boats and speed boats. 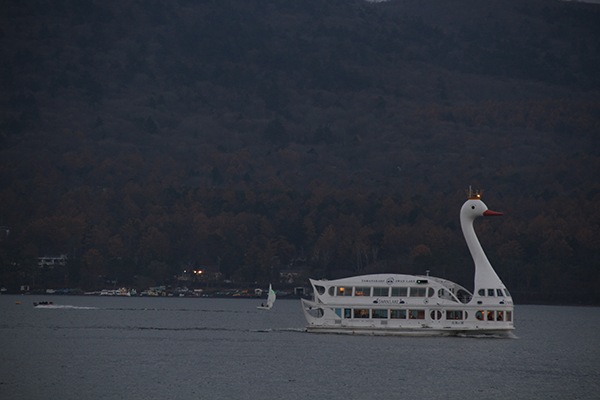 Boating activities on the Lake

After we checked into our hotel we drove round the lake in search of a place to eat our dinner. We were looking for a convenience store where we could buy some pre-cooked food. We found a 7eleven store and went in to buy two packs of pre-cooked dinner.

The staff warmed up the food for us and we ate our dinner in an empty dining room next to the store. The weather was pretty cold  and we were only too glad to be eating our dinner in the warm of the dining room. Our two packs of dinner cost about ¥960. 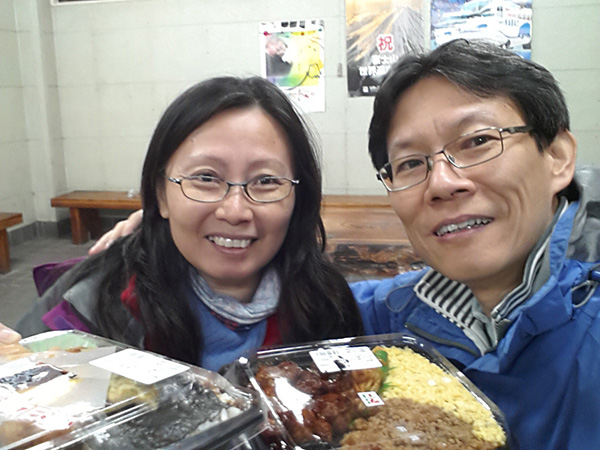 Accommodation for the Night – Hotel MiFuji

Accommodations around Lake Yamanaka were rather expensive. There were limited number of accommodations and most were hostels where there were no ensuite bathrooms in the rooms. We managed to book a twin room (Japanese standard) with ensuite bathroom at Hotel MiFuji and it came with breakfast the next morning. The cost of the room was for ¥13500 (SGD170).It was a good thing that I had obtained the mapcode of Hotel Mifuji and knew its location on the map before leaving for Japan. So when we used the telephone number of the hotel to search of its location on the Car GPS system it showed us an incorrect position on another part of the lake. So we had to use the hotel mapcode on the GPS system and found Hotel Mifuji without any issue. 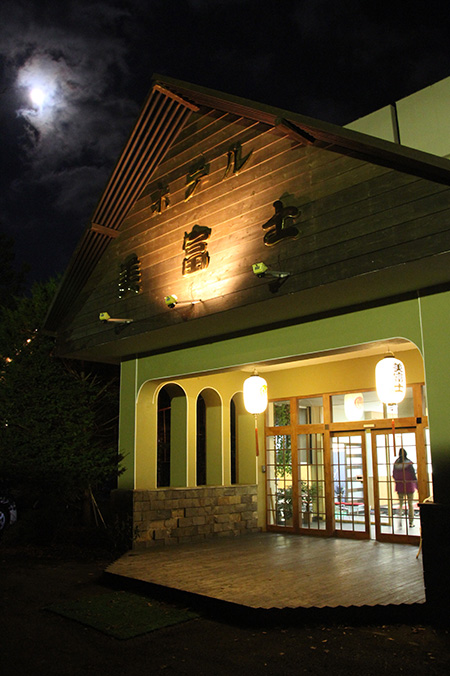 We parked our car just outside the hotel and moved quickly into the hotel as the temperature outside was very low. It was nice to walk into the warm interior of the hotel. The hotel was quite quaint and cosy and the receptionist was a very pleasant lady that spoke a bit of English. We got our key and went up a level to our room. 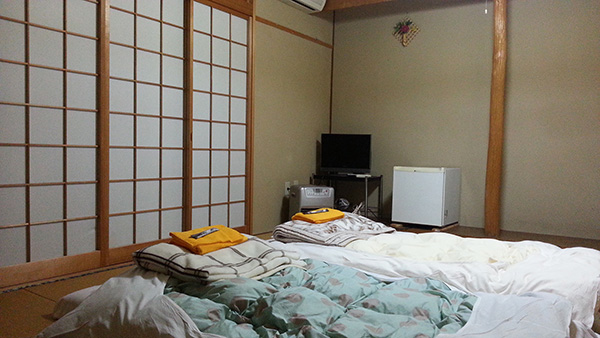 Our room was small but warm and comfortable. The futons was already nicely laid out for us. The main disappointment was the ensuite bathroom. It was so small and had only enough space for a wash basin and a water closet, there was no shower at all. It was an contortionist act for me when trying to bath from the wash basin. The reason I booked a room with an ensuite bathroom was because I would like to take a bath at the end of the day, so it was very upsetting to have to pay more for this room and get an incomplete ensuite bathroom. It was a rip off!