In our original plan for yesterday we had an optional item – “Kanzanji Ropeway ride” but since we arrived late at Hamamatsu the optional item was discarded. This morning we had to make a final decision to go ahead or drop the ropeway ride before leaving Hamamatsu.

Kanzanji Ropeway was the only ropeway in Japan that passes over a lake and riding the ropeway should be like taking a midair stroll over the Lake Kanzanji. But after reviewing the information about the ropeway ride which was just a short four minutes we decided to drop it from our itinerary.

So our plan for the day was to focus on Korankei gorge. The drive to the gorge from our hotel was about two hours and we intended to spend the whole day there. After night fall we would proceed to Iga city in Mie Prefecture where I had booked a room for the night.  From Korankei gorge to Iga city would be another two hours drive. 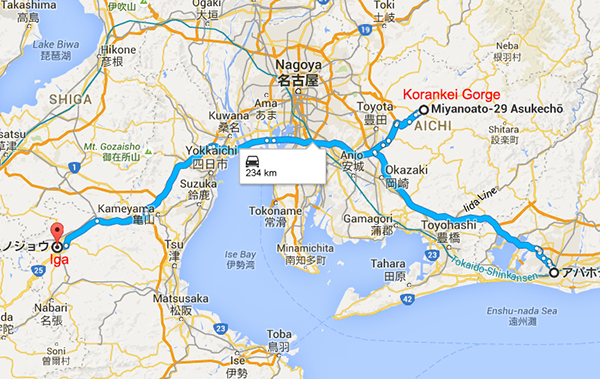 Breakfast at a Highway Service Area

Our room package at the hotel did not come with a meal so we decided to seek out a breakfast place on the highway to Korankei Gorge. We did not have to go far, 30 minutes after we left the hotel we turned into Highway Service Area – Hamana Lake.

The service area was just by the lake, it was quite a huge place with many shops. We stopped to buy some deli and went into Starbuck and ordered a cafe latte to go with our bread. I loved the aroma of coffee especially in the morning. It made me felt alive and happy.

This service area was a bit different from the other service areas, it had a fruit market too. There were several tents selling fresh fruits. So we got our chance to buy some famous Hamamatsu oranges. It was super sweet and juicy.

Driving to Korankei Gorge was a very smooth affair. After we entered the mapcode into the GPS it was just a matter of following the English instructions to get to our destination.

Korankei Gorge or Valley was reputed among the locals to be one of the best spots for autumn colors in Japan. The valley was full of maple trees which turned this valley into a magical land every late November each year. History said that in the 17th century, the head priest of Kojakuji temple planted some maple trees along the path to the temple, prompting many locals to do the same in the area.

So far from Hamamata to Toyota, Aichi there were not many cars on the way till we reached Asukecho town that was when the roads were packed bumpers to bumpers with big and small cars all crawling toward the same area.

I thought parking would be a huge problem because we had to drive past several carparks that was full. Luckily the locals were also renting out their front porches for parking. They came out in full force holding lighted batons in their hands and waving us toward their car porches. 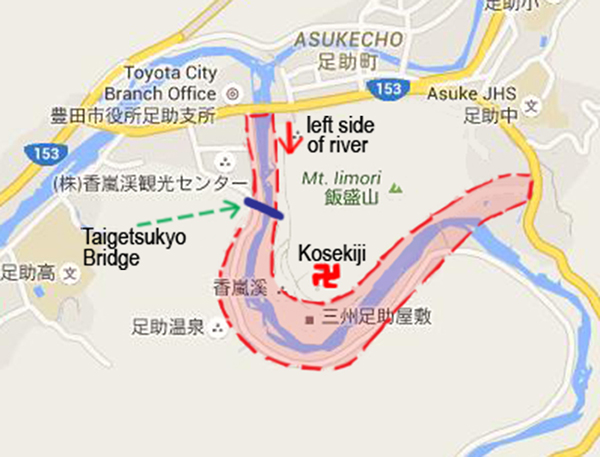 We found a car porch not too far away from the gorge and paid ¥400 to park our car. The owner quickly collected our money and went off to look for more customers. He left without telling us how long we could parked our car at his porch. There was nothing we could do but prepare to pay more when we returned.

The autumn beauty of Korankei Gorge was way beyond my imagination. It was an entire forest of koyo colors. Everywhere I turned the view was more beautiful than the spot before. 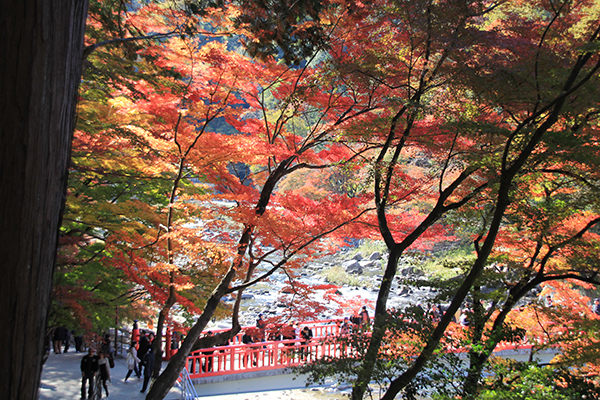 We started our walk on the left side of the river (Tomoe River) and “woo” and “wow” all the way in as we strolled under a beautiful canopy of maple leaves. The sky was covered by the leaves in all sort of red, yellow and oranges shades. Looking upward it was amazing to see that the leaves had became translucent under the sunlight. These leaves seemed to have an internal glow which gave them a 3 dimensional look rather than being a flat leaf. 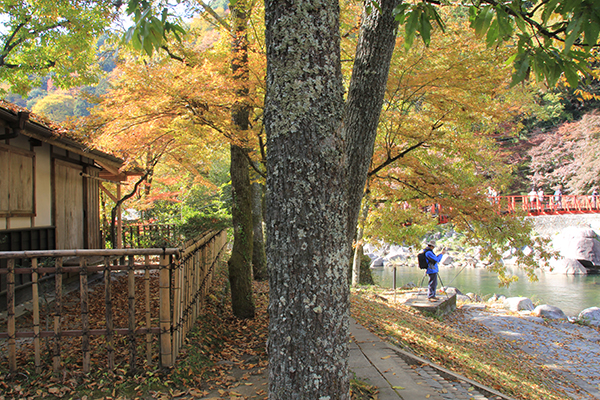 All over on the ground there were plentiful of fallen leaves, they piled up still looking fresh and smelling wonderfully clean.  I came upon a house that had its roof already half covered with soft, tender yellow leaves, I thought they looked like a mixture of gingko and maple leaves. 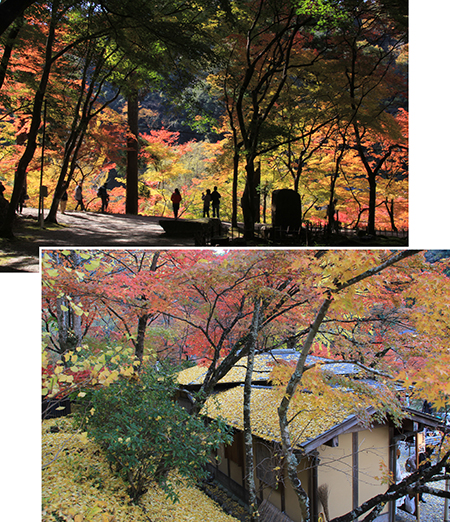 Gingko leaves on the roof

Compared to the Koyo corridor at Lake Kawaguchi where we were two days before, the koyo beauty here was of a scale so many hundred times larger, it was an entire forest on an entire mountain.

Soon we came to stairs that led up to Kojakuji Temple. As we walked up the steps we continued to be mesmerised by the beautiful yellow and red leaves of the maple trees that seemed to rise with us as we ascended the steps to the top. 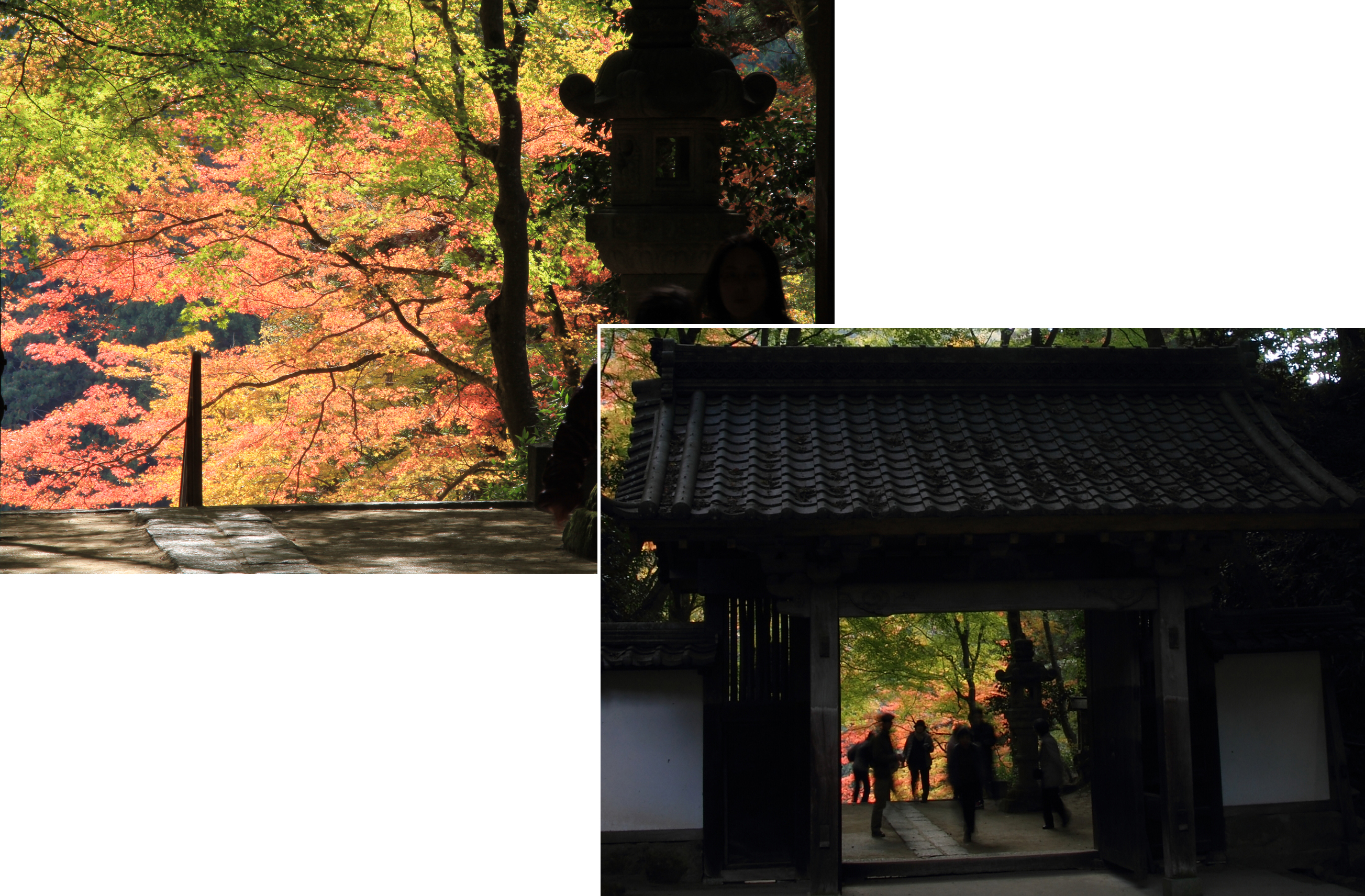 Top of stairs of Kojakuji Temple 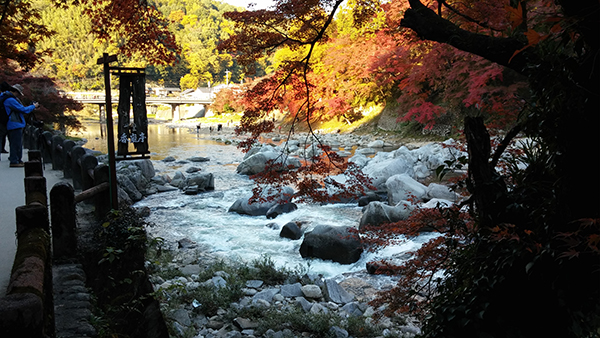 Just as walking under to maple trees let me enjoy the Koyo colour at a near distance, viewing the maple trees from afar also gave me the same intense enjoyment. When I looked from across Tomoe River to the left side of the river, that continuous rows of “Koyo” trees, the river and the mountain backdrop appeared just like a beautiful painting. 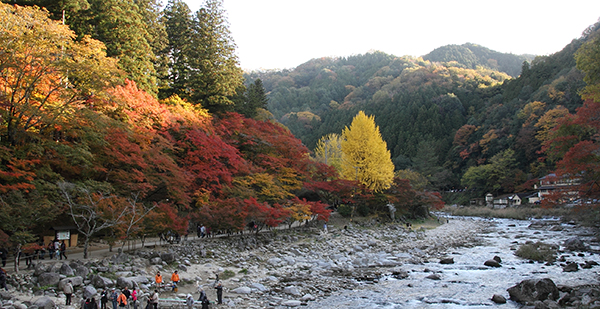 Another view of the Koyo trees along the River Tomoe

It was about 3pm and we had already spent four hours in Korankei Gorge. We had missed the chance of eating our lunch when we passed Korankei Hiroba(square), that was on the left side of the river, where we saw several restaurants selling food. Korankei Hiroba was too crowded and one hour ago we were not hungry enough to want to jostle with the crowd for food.  At 3pm our stomachs were growling unhappily so we had to go in search of food. I remembered seeing a row of shops on the right side of the river near Taigetsukyo Bridge at the beginning of our walk.

We walked by several shops but we were not sure which one we should go into as we had no idea what sorts of food were sold (we could not understand Japanese). We stopped at one stall selling some kind of “potato” looking food. So we bought some to try.We paid ¥530 for 130g and the cook gave us three pieces of the “potato” looking food. When we bit into them we realised that they were just chestnuts. We could not recognise them because they were huge and did not resemble the chestnuts that we ate at home.

After the king size chestnuts we were only half full,  they were tidbits and cannot be considered as proper meal. So we walked on in search of more food and stumbled upon many street-food stalls at a makeshift market. This temporary market was at the junction between the main road and the river on the right side of the river.  There were so many stalls so many varieties of street food, we were spoilt for choice. 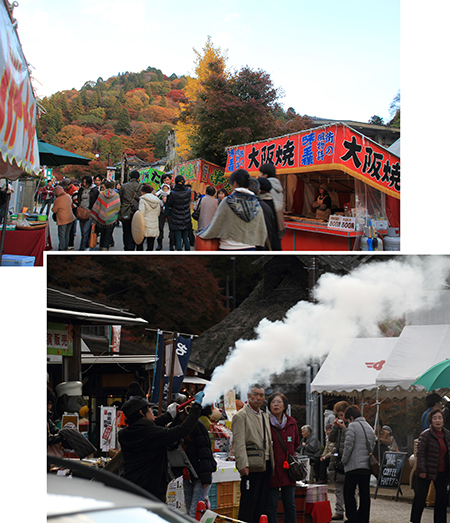 We grabbed two packs of Japanese street food but could not find a place to sit and eat. There were just too few tables and too many people. In the end we had to crouch below some bushes, as we sat on a low wall of a plant trough at the side of a walking path. 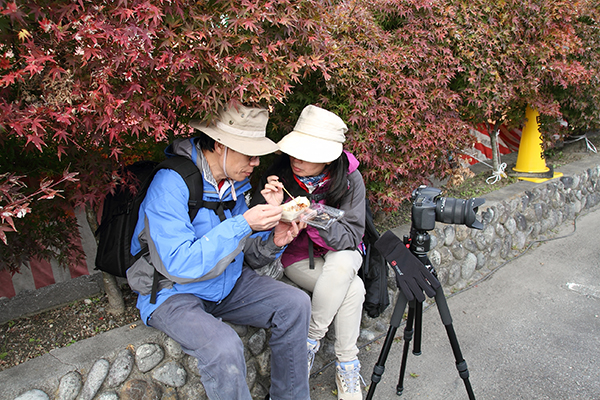 When we were done with our food and our stomachs satisfied it was about 4 pm and the sun was beginning to set. We were here at Korankei Gorge since 11 pm and it was still not the time to leave yet.

We made do with whatever remaining good spots we could find and set up our cameras on our tripods and waited. The sky darkened turning brilliant blue and soon the “light” came on. Absolutely stunning. This view was the reason we stayed on so late for – ” Korankei Gorge Light Up”. 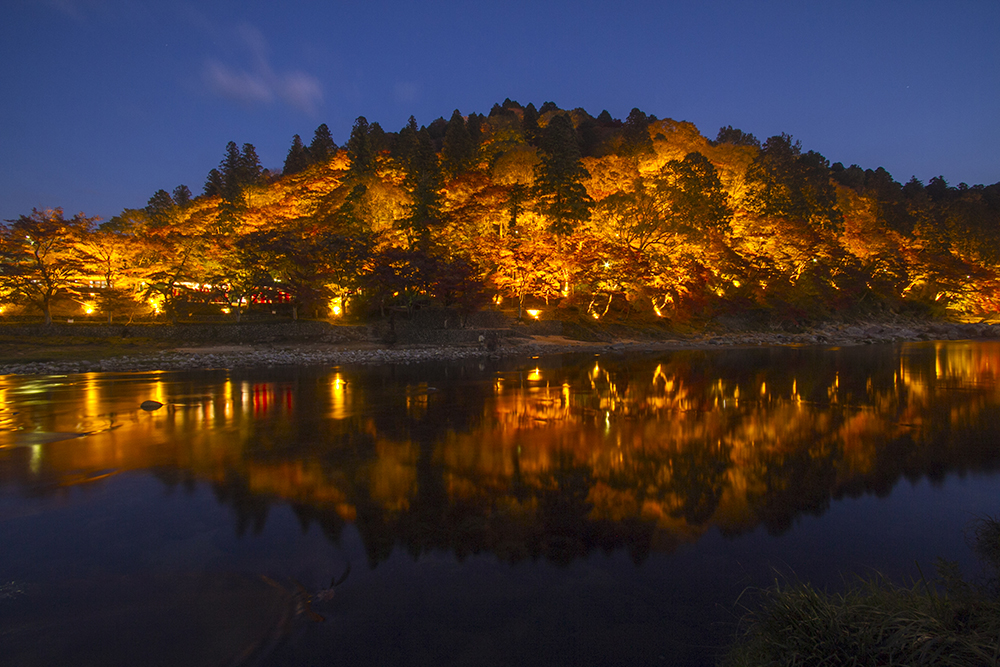 Light up at Korankei during Koyo Season

Soon the sky darkened to black and the crowd that had stayed on for the light-up dispersed. But my hubby was still not done with his photography so I sat on a river rock and waited for him. Surprising with the sun down it became very cold at the riverside. My guess was that the temperature went down to as low as 5°C. Who would have thought that autumn could get so cold. It was lucky I came well prepared with additional sweater and gloves. 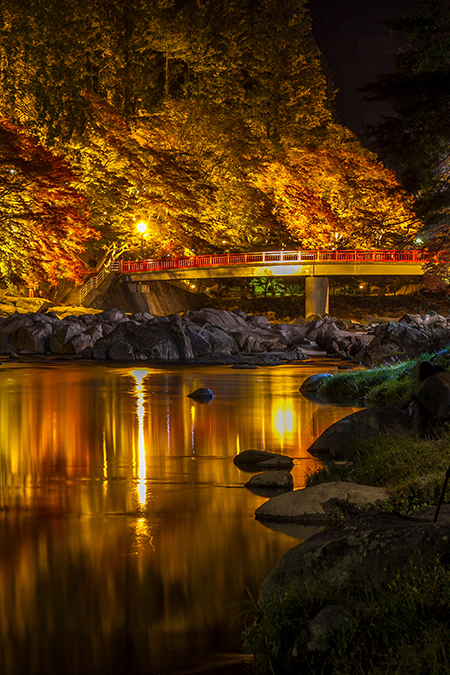 By about 6.30pm we packed and went back to our car. It was the only remaining car at the carpark pouch. Most visitors to Korankei Gorge had already left, the road was pretty quiet too.The house owner that rent out the car park space to us did not appear to collect additional rental fee so I guess that ¥400 we paid in the morning was meant for a whole day parking. This worked out to be quite cheap considering that our car was parked here for close to six hours.

Dinner and Night at Iga

We would need to travel about 136km for slightly more than 2 hours from Korankei Gorge to Ida City of Mie Prefecture where we would stopped for the night.  After about one hour on the highway we turned into a service area to have our meal.As usual I would eat some soupy stuff because I loved hot soup on a cold night. My hubby had pork and rice. It costed ¥1350 for both of us. The green tea was free for all diners. 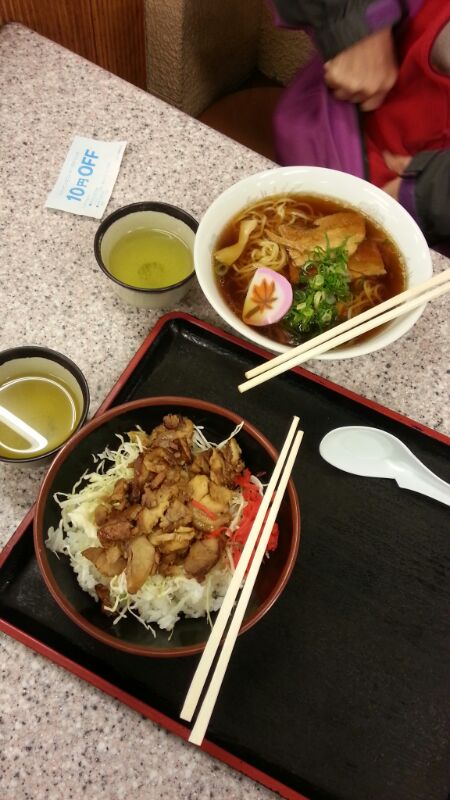 After our meal and a good warm rest we carried on our journey to our hotel. I had already booked a double room at Iga Ueno City Hotel for ¥7,500. It came with ensuite toilet, free parking but no meal.

When we reached our hotel it was already close to 9pm. The staff at the reception was very friendly and directed us to the car park which was free for customer. We got our room key and were up to our room in no time. Though the room was small it was clean and comfortable.

One thought on “Day 4: Korankei Gorge”