Every night before a day, we would review our itinerary plan for the next day and finalised our route. Our original itinerary for today was to visit a Ninja Museum in Iga in the morning, in the afternoon we would move on to Mount Yoshino. For the night we would stay in Osaka. We might dropped by to visit Todaiji Temple of Nara if time would permit else we would visit the temple the next morning. 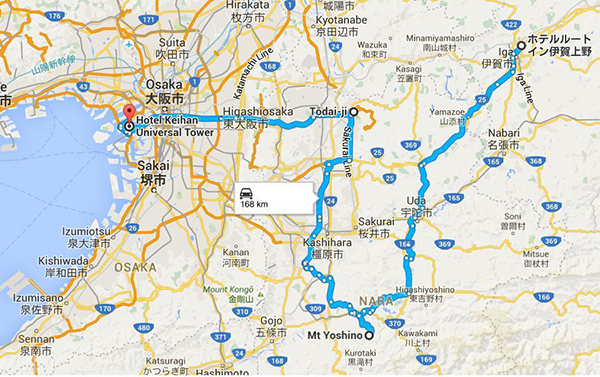 When reviewing our itinerary last evening we decided to drop our visit to the Ninja Museum from our plan. Being Singaporean we grew up watching many historical Japanese dramas during our younger days so we were pretty familiar with Ninja’s matters.  We did not think that the Ninja museum would be a novelty for us to be worth visiting. 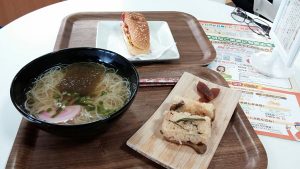 Breakfast was a simple and very light affair. I had soupy stuff that looked like “BeeHoon” (thin white noodle) and my hubby had hot dog and rice. The combined cost of our breakfast was  ¥700, quite a reasonable amount.

After breakfast we set off to Mount Yoshino which was about 70 km away and would take about 1.5 hour of driving to reach.

We knew we arrived at Mount Yoshino when we drove into a huge open-air carpark with a large signboard displaying a map detailing the roads of Mount Yoshino.

Mount Yoshino was a mountain located in Nara Prefecture. In 2004 it was designated as part of a UNESCO World Heritage Site under Sacred Sites and Pilgrimages Routes. It was also one of Japan best locations for viewing cherry blossom in spring and koyo leaves in autumn. Among the many Japan autumn scenery pictures that I had seen, Mount Yoshino scenes were among the best.  This was the reason I included Mount Yoshino as one of my sightseeing destinations during this trip despite knowing that by the time I reached Mount Yoshino the best of its “Koyo” season might had already past. 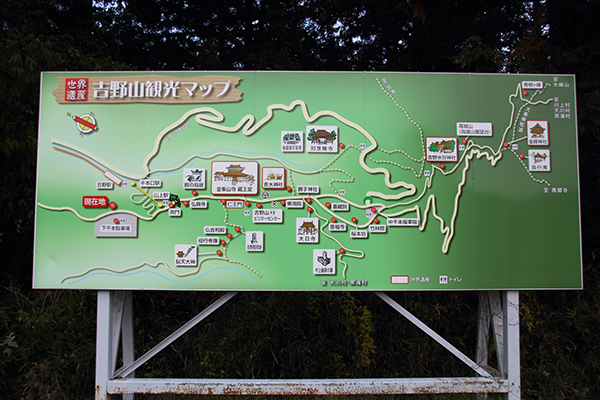 The “Koyo” trees around the carpark had already dropped their leaves covering the ground with crisp orangy brown leaves. There were more leaves on the ground than on the branches. The autumn front progressed from the north of Japan to the south, the leaves of trees on higher ground started changing color before those on the lower ground. This confirmed my belief that our timing here was past the best of Mount Yoshino “koyo” season. 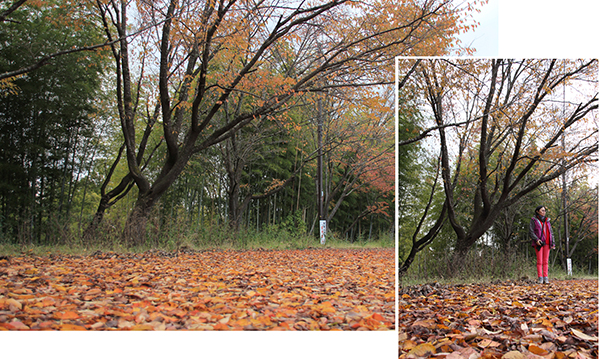 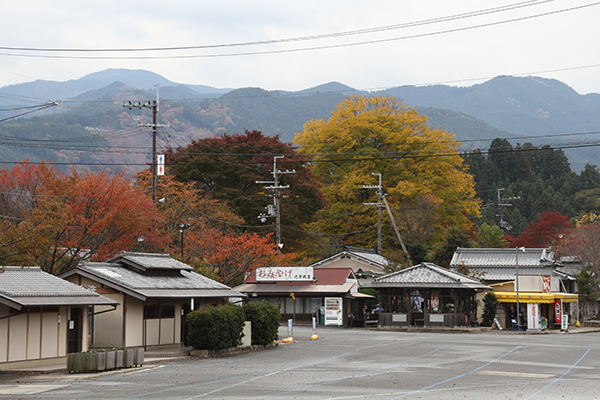 Using the google map on my phone I set a walking route that started from the carpark to the farthest end of a road that went deep into Mount Yoshino. The distance was 14.5km. There was no way we could walk that far in and return assuming that the sights were captivating enough to kept moving us forward. 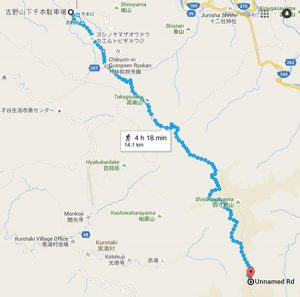 Road from carpark to the end

Since there was no signboard that stated “no entry” to car we decided to drive into the interior of Mount Yoshino as far as we could get. After the entrance, the interior road of Mount Yoshino narrowed. Luckily our car was the only car on the road so there was no problem at all. Our first stop was at a lookup point into the valley which was about 300 metres from the carpark. The road at this section was wider so we parked our car at the side and came down to enjoy the colorful scenery. Among the green, there were still many trees that were full of red and yellow leaves.

As we was strolling along the short stretch admiring the view, all the sudden classical waltz music flooded the air. The time was 12 noon, I was not sure what was the purpose of the music, I assumed that it was to enhance the enjoyment of the visitors. To me the music seemed out of place, it was overly loud in a serene environment. Luckily the music did not last long, it was broadcast for about 10 minutes. 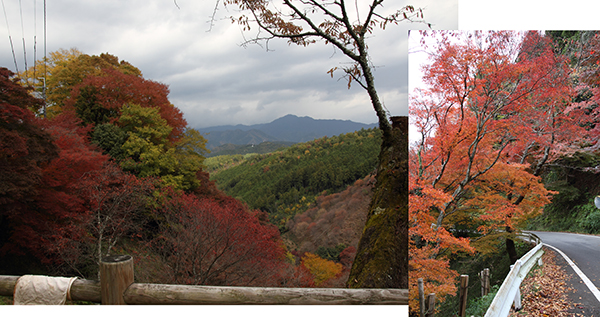 We went back to our car and drove forward and came to a doorway spanning across the road that led into a town or a village.  We could see many low traditional buildings lining both sides of the road. 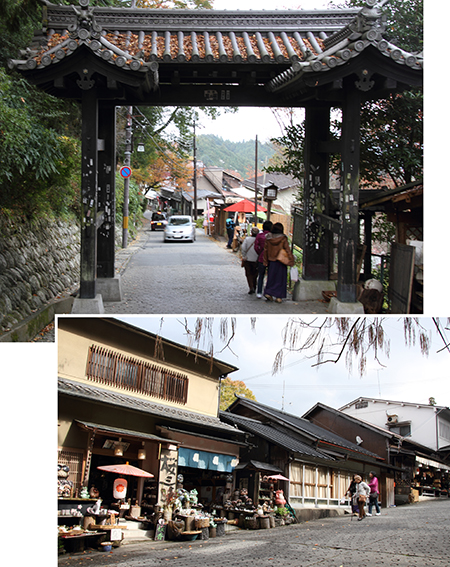 Entrance to a village

I had always thought that Mount Yoshino was a mountain full of trees and a few ancient temples, I definitely did not expected a living village full of souvenir stalls, restaurants and local hotels (ryokans). We parked our car again at an open space near a wide steep stairs that led up to a temple (Kinpusenji Temple) and came out to explore the village, moving from shop to shop. 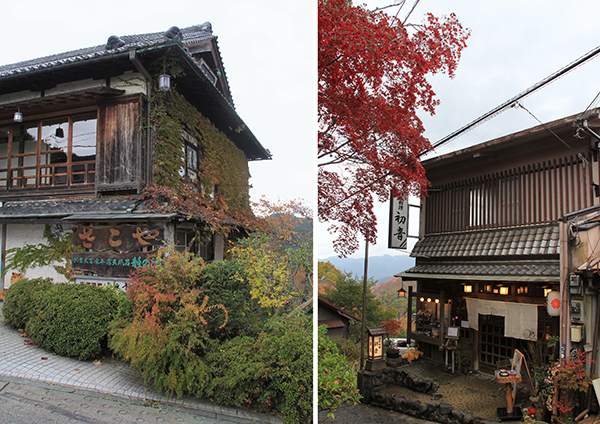 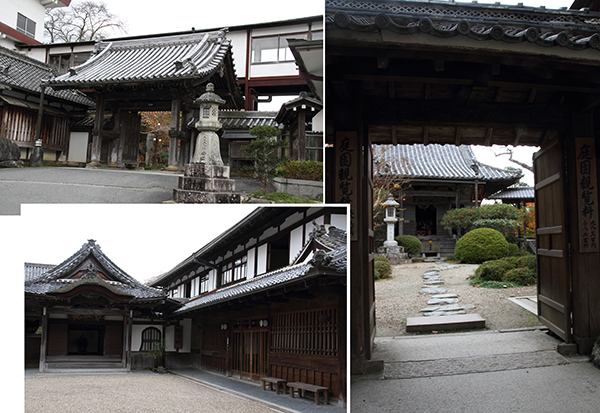 We walked for about a kilometre and came to the doorstep of Chikurin-in Temple. From the outside it looked just like any other Buddhist temple nothing very spectacular. Since it doors were opened we got a glimpse of some koyo leaves in its compound so we walked into the temple to explore. 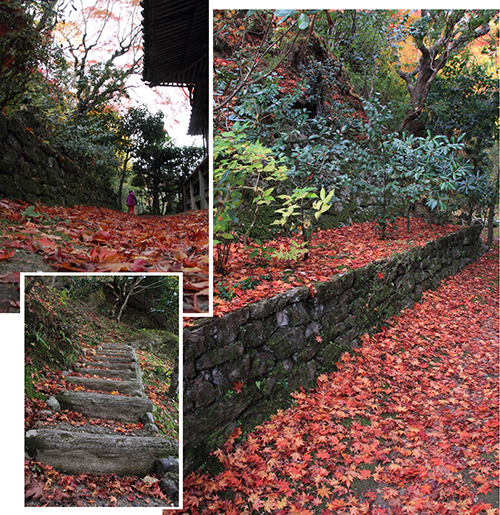 We walked further into the inner part of the temple and came to a garden and a pond. There were still several maple trees at different stages of it autumn color transformation. So some leaves were still green, while others had already turned yellow, oranges or brilliant red. 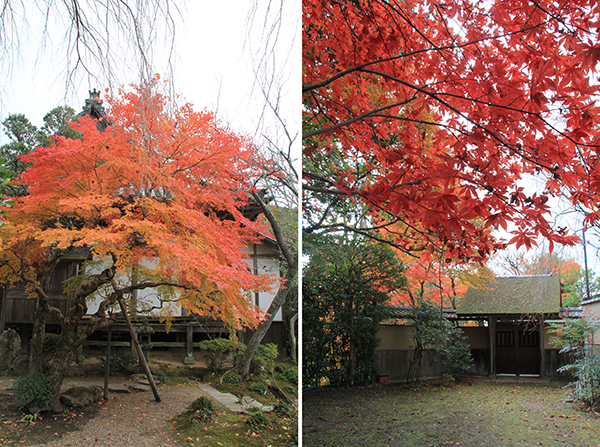 Chikurin-in Temple was an absolute surprise. When I stood outside the temple looking through the doorway I was not too sure if the temple was worth my time. I was glad that we took the time to explore or we would have missed the the stunning “Red leaves ground” and the beautiful garden and pond. 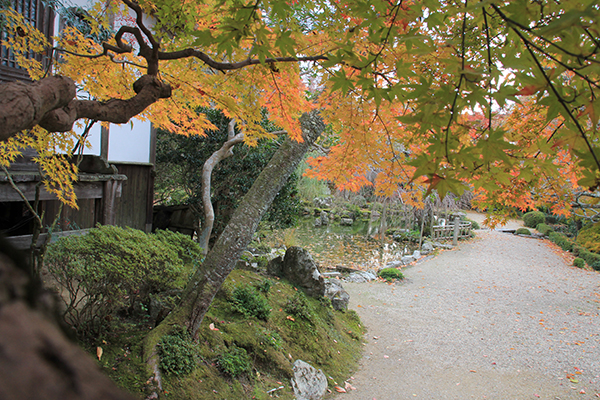 As I was coming out of the temple I walked past a building with a long corridor. The corridor was carpeted red and had glass panels all the way up to its roof. Looking through the glass panel I saw heaters place at interval along corridor keeping the building warm. This made me felt cold standing on the outside. I saw a bunch of youngsters wearing white socks running through the corridor and disappearing into the building. Apparently this temple was also a ryokan and for a while I felt as though I was an intruder as I was not a customer of this ryokan. On second thought this place was also a temple so visitors needed not be a customer of the ryokan.

After we left Chikurin-in temple we decided not to continue our walk inward as that would be getting farther away from our parked car.

Our car was parked near the front stairs of  Kinpusenji Temple. On the way to our car we saw another stairs that led up to the temple. This stairs was longer and gentler. So we went up to the temple using this stairs.

Kinpusenji was the leading temple in Yoshino and one of the most important temples of Shugendo, a religion based on mountain worship that combines tenets of both Buddhism and Shinto.

Walking into the compound of the temple we came to the main hall. The hall called the Zao-do Hall was 34 meter high and was second largest wooden structure in Japan behind Nara’s Todaiji Temple. 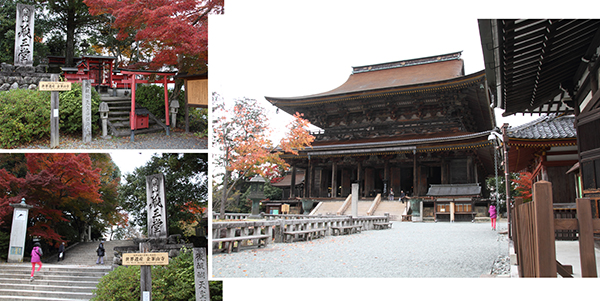 By the time we finished exploring Kinpusenji Temple it was already close to 3.30 pm, though the sun had not set yet the sky was getting very dark as a thunder storm seemed to be coming on. 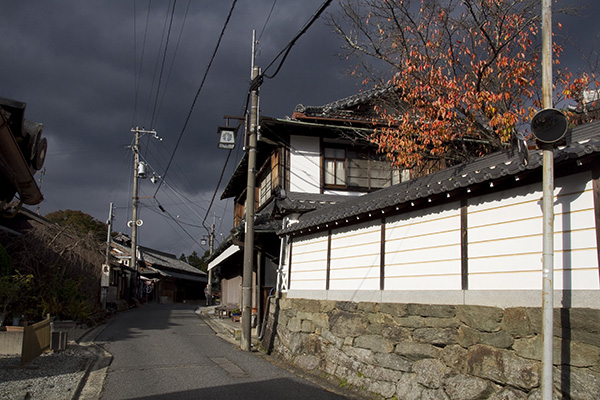 We had been in Mount Yoshino for close to four hours and it was time to leave.  After Mount Yoshino the next destination in our itinerary for today was Todai-ji temple of Nara. As it would take about one and a half hour to drive to Todai-ji it would mean that we would reach the temple at around its closing time (5pm). So we decided to skip Todai-ji temple.

Though we did not arrived at Mount Yoshino when it was in its best autumn period, I still found the visit a very enjoyable experience. One advantage of visiting during the fringe period was the relatively fewer people around which allowed us to move around leisurely. Taking photo was also a more pleasant experience as I did not have to constantly wait for people to move out of my view frame.

A night at Hotel Keihan Universal Tower in Osaka

After Mount Yoshino our next major koyo destination was Kyoto. It was in our plan to explore Kyoto on Day 6 (today was Day 5).  We could drive straight from Mount Yoshino to Kyoto and stay a night in there and explore the city the next day. Unfortunately Kyoto hotels were in high demand during autumn and the room rates were very expensive. So it made better economical sense to stay in another city enroute to Kyoto and drive into Kyoto the next morning.

After some searching on the internet I found that Hotel Keihan Universal Tower in Osaka was offering a fantastic price for a huge double room at ¥7350 at night. Package did not include breakfast. 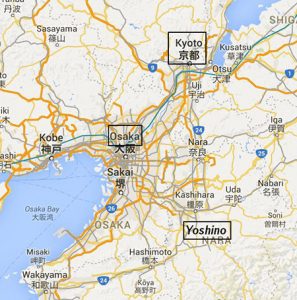 Osaka was enroute to Kyoto

From Mount Yoshino to Osaka, it took us about one and a half hour of driving. We were both tired from five hours of walking at Mount Yoshino so we did not enjoy the drive and found it too long and tedious. The hotel was not too difficult to find but we missed the turn into its carpark and had to make a big round about to get back to the carpark entrance.

Hotel Keihan was a huge hotel and we probably checked in at its busiest time of the evening as we had to wait for more than 30 minutes to be served at the hotel reception counter and another 15 minutes to get into our room. All this waiting made me very moody. But upon entering the room my bad mood instantly disappeared.

Wow the room was huge and luxurious, and the  view from our room was fantastic! All the sudden we did not felt so tired after all.

Views from our Hotel Room Window 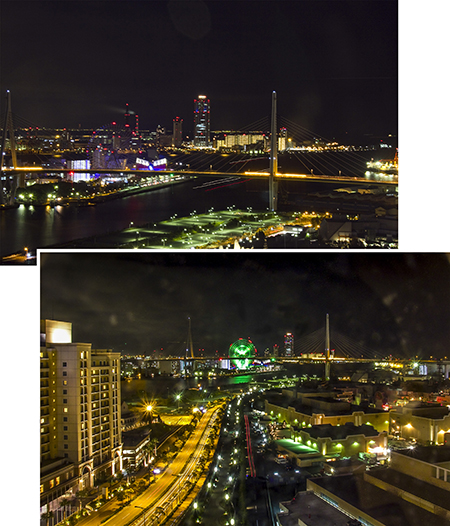 Views from our Hotel Room Window