Today was our third day in Kyoto, there were only two destinations in my list of Kyoto attractions that I had yet to visit. They were:

Both temples were famous for the autumn scenery in their compounds. We would end the day at Takashima Shiga a prefecture north of Kyoto next to Lake Biwa. 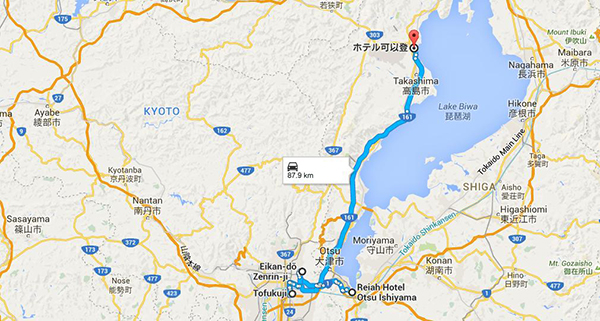 Route of the day

Kyoto was the farthest destination to the west of our trip before we looped back to Tokyo in another 9 days.

This was the second morning we ate breakfast at Hotel Reiah. The breakfast spread was the same as the day before. We had potato salad, croissants, eggs, ham etc. The breakfast was simple and good enough for us as we were not big eaters.

Eikando was only 14 km from our hotel so the drive took only 20 minutes. Before reaching the temple, the roads leading to it were packed with cars and traffic jams were everywhere. 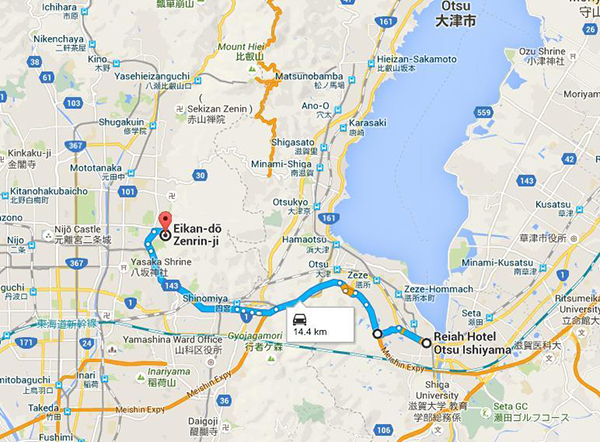 The carparks nearer to the temple were full so we drove on searching for carpark space. We turned into several side roads looking for parking space. Finally we parked our car along a quiet road just by the roadside near a torii gate. There was no sign stating “no parking” so we left our car just by the edge of the road. From my google map on my handphone we were about 700 metres  from Eikando Temple.

The entrance fee into the temple was rather pricely, it was ¥1000 per person the most costly tickets we had to pay so far. Walking through the entrance (so-mon gate) of the temple was a eye-popping experience. The koyo colors were too shockingly brilliant. 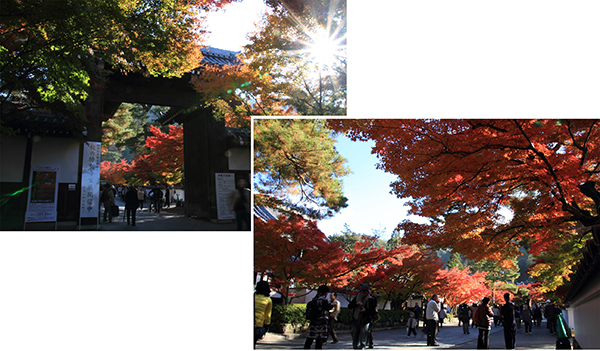 There was a long path from the entrance to the main hall and it was full of koyo colours. Our arrival at Eikando Temple seemed to be at its best koyo timing. Majority of the trees were in their autumn colors and the branches had not shredded their leaves. 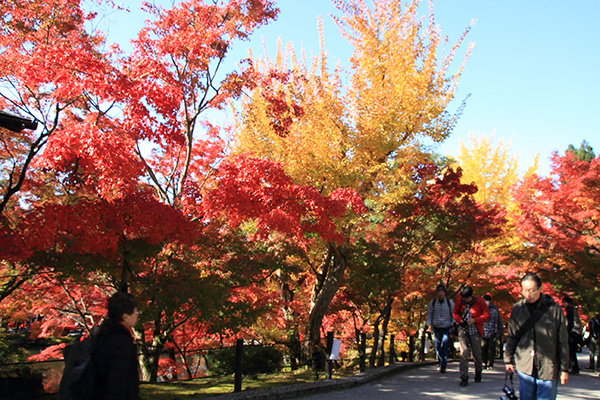 Path leading to the Main Hall

Visiting Eikando temple at the best time also meant visiting it at its most crowded period. When we reached the main hall there was a huge queue wanting to get into the Shaka-do (head priest quarters). It was so crowded that we were propelled forward by the people behind us. At the steps we were given bags to carry our shoes and had to walk in our socks when we entered the main hall. Photography of the interior(rooms) of the hall was not allowed. 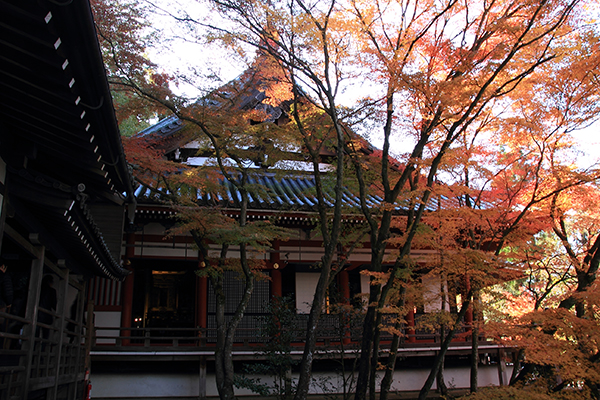 Along the corridor of the Shaka-do we passed the Karamon Gate which had a sand garden in front of it. There was also a heap of sand in the middle. This gate was said to be opened for only messenger from the imperial court. Before the messenger entered the Shaka-do he would level the heap of sand as an act of purification. The heap of sand was huge and I wonder how much time would be required to level it. 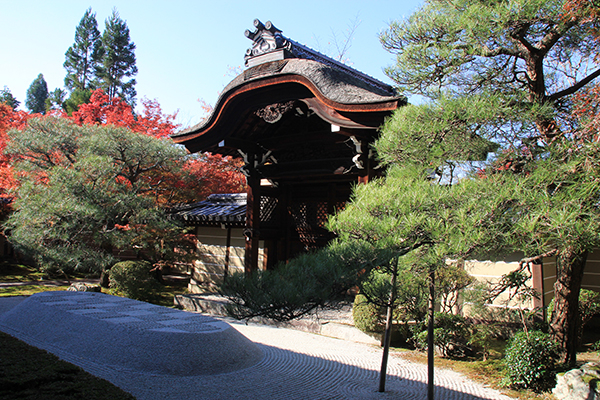 The garden in Eikando was very lovely with water features such as man-made stream, ponds and waterfall. Every angle we looked there were koyo colors and the views were magnificent. 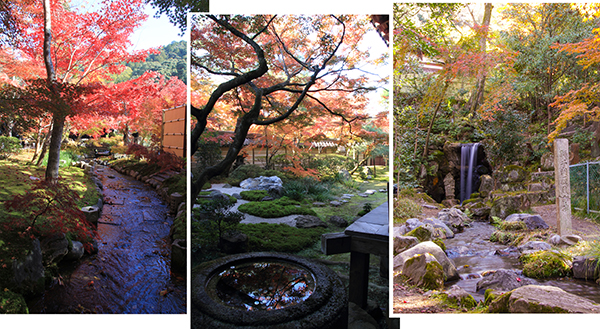 In the temple ground on the upper slope was a pagoda, (Tahoto Pagoda), it looked especially beautiful nestled among the koyo trees. Tahoto style pagoda are two story structures whose first stories are square and second stories are round. 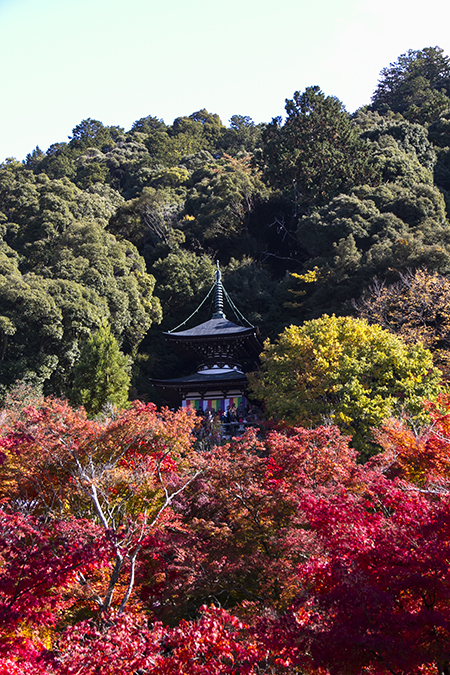 We moved on to the Hojo-ike pond which we had walked past earlier in the morning when we entered the temple ground. Interesting the pond looked even more beautiful than it did this morning. In this return visit we took a different path and got to look at the pond from a position directly opposite the bridge.

The combination and placement of the different koyo colors, the brilliant blue sky, the white clouds, the bright sunlight and the still pond surface created a scene that looked like a beautiful painting. Hojo-ike pond instantly became my favourite “koyo” place in Eikando temple. 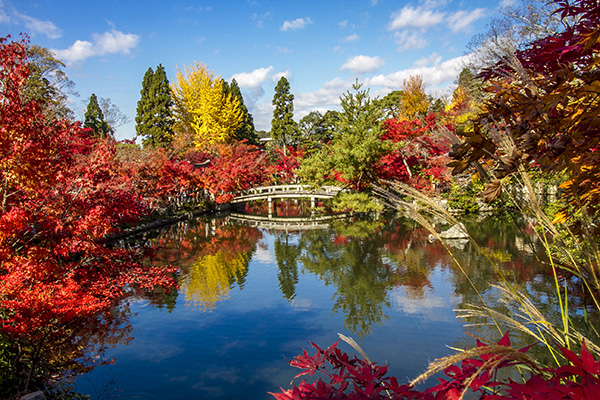 We would have loved to stay longer in Eikando Temple, unfortunately we got a call from the car rental company who told us that we need to move our car from where we had parked which was by the side of a small road.

When we reached our car we met a Japanese middle age lady who looked very annoy. She had set up some stuffs on a table at the side of the road at the back of our car. Apparently she lived in the house across the road and would set up a low stall at the place where we parked our car. I apologised but she just brushed me off, rattling in Japanese and totally ignoring me when I repeatedly bowed and said sorry. So far my experience with Japanese people was that they were very polite and helpful but this middle age lady told me that they could be very rude too when annoyed.

We decided to move on to Keisoku-Ji temple which was planned for tomorrow afternoon. Keisoku-ji temple (鶏足寺) had another official name it was Hanpukuji Temple (飯福寺), it was a ruin with no grand halls or majestic structures, totally unlike all the other temples that we had visited the past few days. 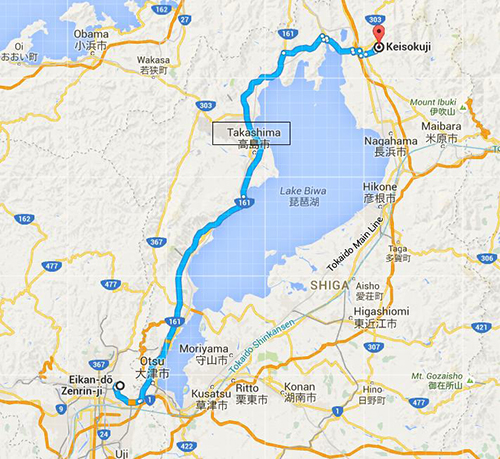 When planning for my autumn trip in Japan, I saw a photo of Keisoku-ji and was totally captivated by its autumn beauty. I knew it was a place I must visit, unfortunately there was not much information on the internet regarding its location and there were several temples with the same names. But after some researching I found its location and mapcode!

The distance from Eikando-ji temple to Keisoku-ji temple was about 95km and the trip to took about 1 hour and 45 minutes. When we reached Keisoku-ji ground we were very surprise to see so many people. 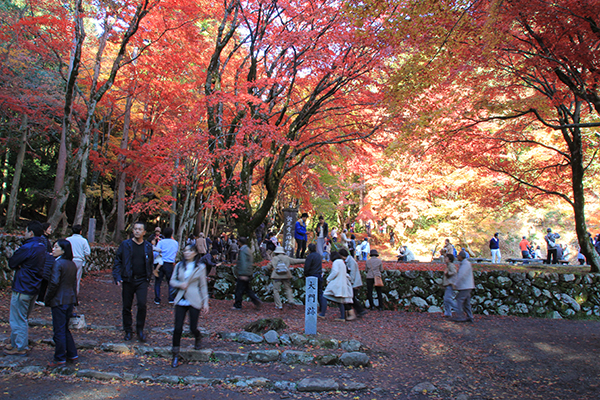 Keisoku-ji was such a out-of-the-way place and we definitely did not expect a huge crowd. The locals were coming in full force on tour buses. The maple trees were so tall, so huge and the leaves covered the entire sky above us.Keisoku-ji had a ruggedness that was not seen in the other places we had visited. The stone steps were broken and smoothened with age. There were raised stone grounds that looked like it was some kind of ancient stone foundations for structures that had long fell apart or destroyed. 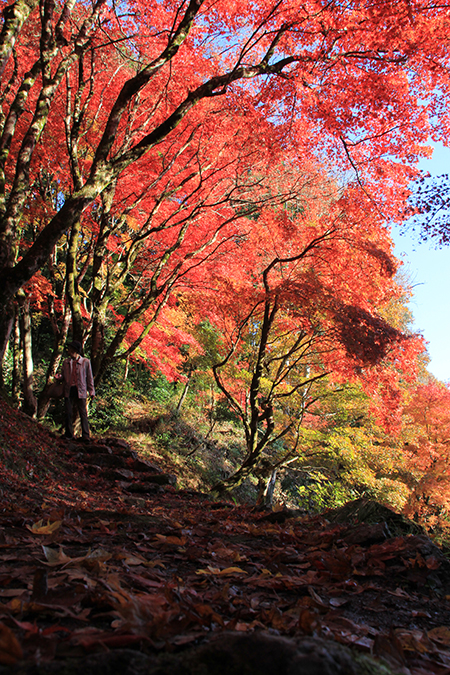 This place had so much characters, so much history, it looked like a place that had a glorious past. Shoguns, samurais and high priests must had walked on this ground.

I loved exploring the ground, pulling myself up the uneven stone steps, looking at the thousands and thousands of fallen leaves all over the place.

Coming from a country one degree north of the equator that had only hot season all year round, to see autumn colors in such a massive scale filled me with a lot of unexplainable emotion. 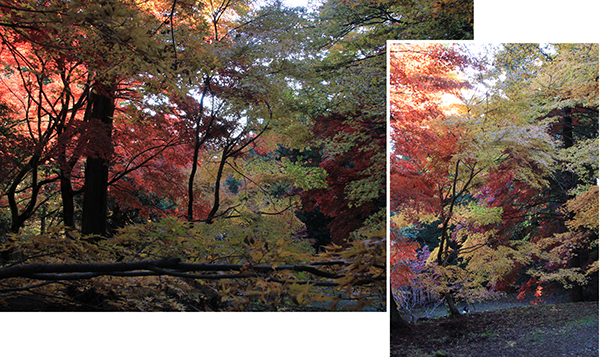 We walked up the rocky stairs that were cut into the side of the hill and reached the top. Looking from top down, we saw an incredibly beautiful green, red and yellow forest. The sun was about to set and it rays shone through the maple leaves turning them fiery red. The entire place looked like it was on fire! 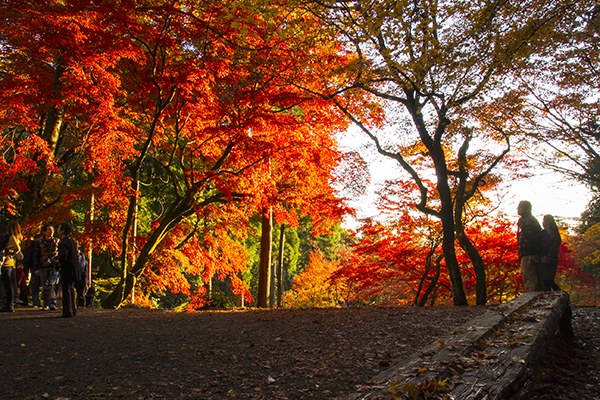 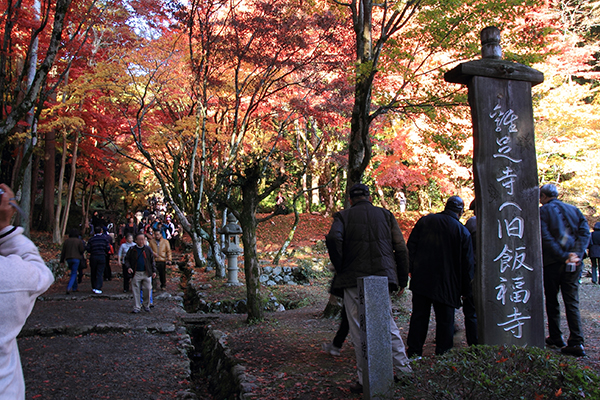 In my research on the best timing to visit Keisoku-ji, various internet websites mentioned that the visit should be done in later half of November when plentiful of maple leaves had dropped and the ground was full of them. Unfortunately these websites did not mention the huge crowd or the best time of the day to visit Keisoku-ji. Coming in the late afternoon was certainly not the right timing to see red leaves on the ground, I only manage to see some pockets of red leaves on some areas of the ground but nothing like those that I had seen in the photos. 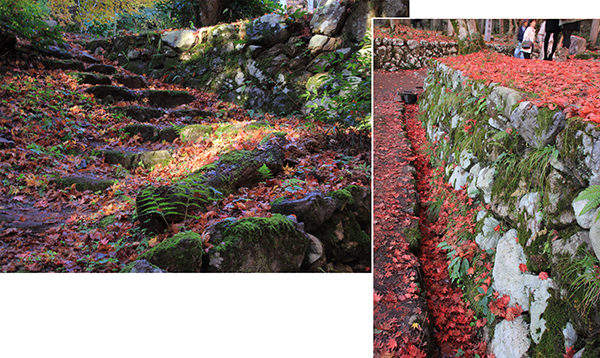 Some pockets of red leaves on the ground

Now that I had visited the place, I believed the only way to see the “red carpet” ground would be to come very early in the morning before visitors started to pour in. The leaves that had fallen through the night would certainly carpet the ground red. Unfortunately for me I would not be able to come back again. So I would not have the chance to see the “red carpet” phenomena that Keisoku-ji was famous for.

Dinner was taken at a rest area along Shiozu Highway about 12 km for Keisoku-ji. We had been walking the whole day and it was nice to slip off the highway, on the way to our hotel, into a rest area for some inexpensive cooked food. The combined cost of our meals was ¥1550.

Hotel for the Night

I had booked a double room for a night at Kaitorou (ホテル可以登) in Takashima Shiga Prefecture. The room rate was ¥8200 without breakfast. Parking was at ¥200 onsite at night.

Driving to our hotel was actually backtracking. Our original itinerary was to visit Eikando-ji and Tofu-ji which were located in Kyoto in the day and to move north to visit Hyoshi-Taisha temple in the evening before driving further north to Takashima Shiga Prefecture for our night. Based on our original itinerary our driving route kept moving northward along Lake Biwa. 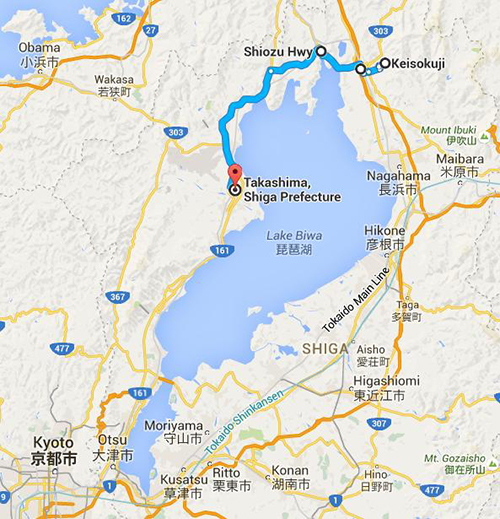 backtracking to our Hotel at Takashima

All our hotel rooms for this trip were pre-booked before the trip and last minutes cancellation would meant total forfeiture of the room fee. So even though we were ahead by half a day we could not check into our pre-booked hotel room a day ahead. So we had to go back to Takashima Shiga Prefecture where I had booked a room for the night.

It was not easy to book a hotel room in the towns north of Kyoto on the west side of Biwa lake as they were not listed on the popular hotel booking websites. To search for these hotels I had to expand my google map and searched down to road level for them. Once I found a hotel I would get its hotel websites to book the rooms. 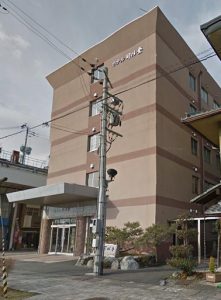 Well that was how I booked Kaitorou hotel (http://kaitorou.com/kaito/index.htm). The website was in Japanese so I used google translate to understand the website and placed my booking.

I knew that by my third day in Kyoto I would have completed all my must-visit-Kyoto-attractions but rather than to stay in Kyoto for the 3rd night our plan was to move out of Kyoto, northward, so as to cut down the travelling the next day.