We planned to drive up to Shirakawa-go historical village and spend the entire morning there. We had no idea how much time would be sufficient to explore this village so we allocated ourselves a maximum of 9 hours. At the latest we would leave in the early evening and drive on to Takayama city for the night.

In the event we did not need so much time at the village and reached Takayama early we had one optional item to fill the gap. That would be the Takayama Matsuri Yatai Kaikan. 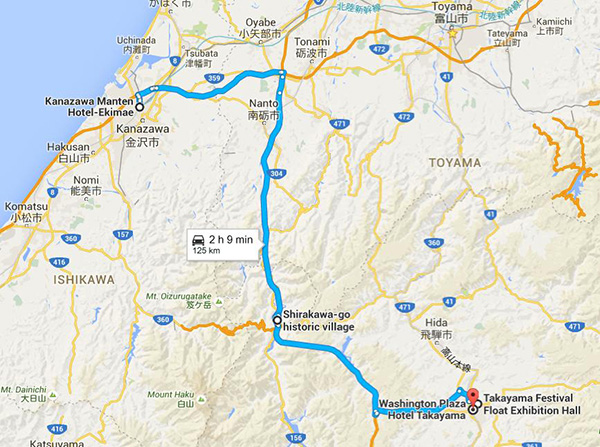 The drive from Kanazawa Manten Hotel to Shirakawa-go was about 77km and took about one and a quarter hour. The weather was not too good, it started drizzling in the morning before we started our drive and went on for the entire duration of our journey.

Gokayama was less developed and less crowded than Shirakawa-go and its villages are smaller and more intimate with less intrusion from modern building. At first I thought Gokayama villages would make better attractions but based on the pictures that I had seen, Ogimachi village of Shirakawa-go offered the best scenery. 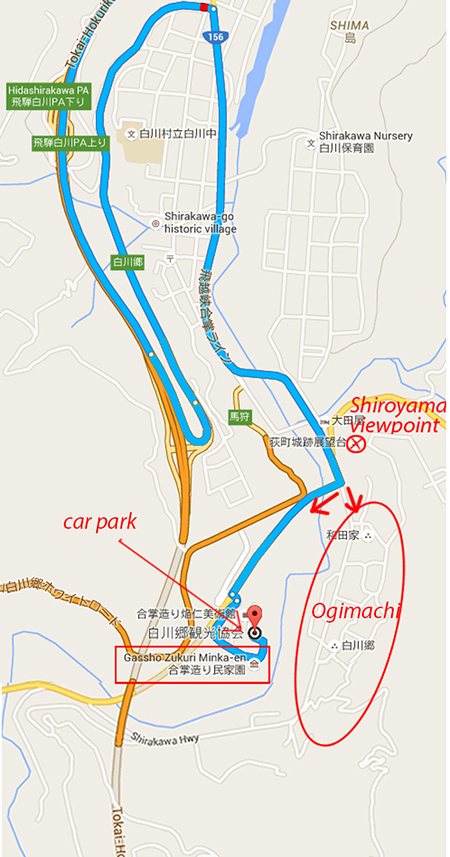 By the time we reached Ogimachi village the rain became heavier and we had to bring out a raincoat. Unfortunately we had only one so we had to buy another raincoat at a tourist shop located in a huge car park just outside the village.

We had two choices to visit the Gassho Zukuri Minaka-en (open air museum) which was near the car park or the real Ogimachi village accoss the Shokawa river. We naturally picked the Ogimachi and walked across a pedestrian bridge over the river. 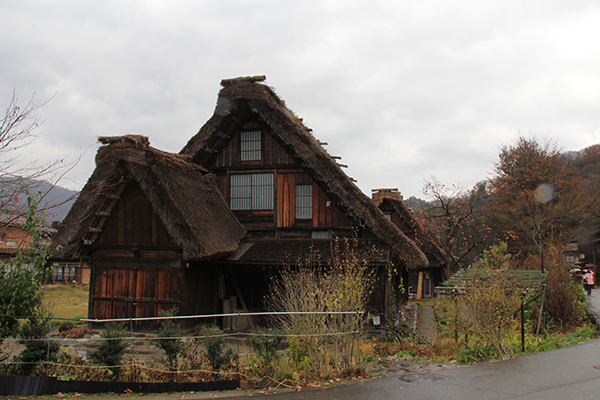 The village had many traditional farmhouses, with high pitched roofs and white colored windows. Most of these houses were still used as dwelling for the locals while other were turned into restaurants and rokyans for tourists. 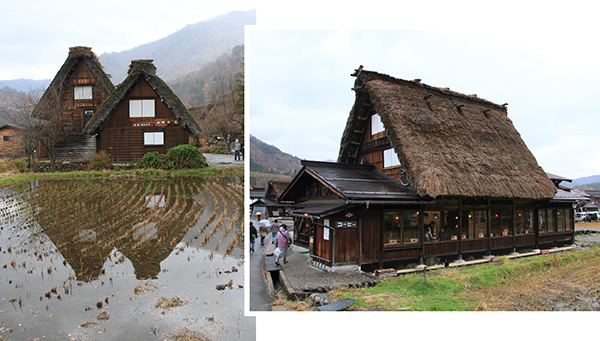 A restaurant catering to tourists

On the whole the village preserved its old traditional look very well. We walked along the main road that ran through the village, stopping to stick our heads into the opened doors of the houses. Some of the farmhouses were in poor shapes while some were just being themselves old and ancient. Apparently a few of the farmhouses had been relocated to the open air museum in an effort to save them from further deterioration.

We knew that there was a great lookout viewpoint of the Ogimachi village somewhere on the hill that faced the village so we kept a lookout for signage pointing to the viewpoint. We walked and walked and finally reached the observation deck at the view point. The view was wow! 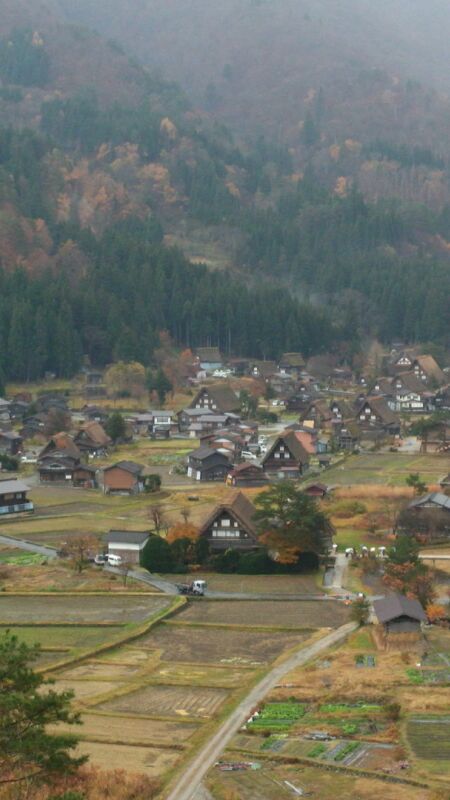 The experience of seeing the entire village from the hill top was to me 10 times more wonderful than viewing the farmhouses up close when walking among them in the village.

The persistently drizzling that I thought had spoiled my visit contributed a beautiful mist to the view in front of us. The blurry mist in air layered the hills behind the village bringing forth a mysteriously atmosphere into the village background. This village looked like a lost shangri-la where time had stood still. Like a village that was cut off from the modern civilisation beyond the hills.

I wondered how this view would look like at nightfall when the place was lighted up by only the lamps in the houses? Or how it would look like in summer when the paddy fields were green, or in the winter when snow covered the thatch roofs and the land. What about spring? I was sure that whatever the season or weather, Ogimachi of Shirakawa-go would still look like a shangri-la.

We left the village at about 1pm and it was still drizzling, it looked like the rain would go on for the entire day. It was great that despite being an ancient village there were proper tar roads everywhere so we did not have to waddle in the mud. 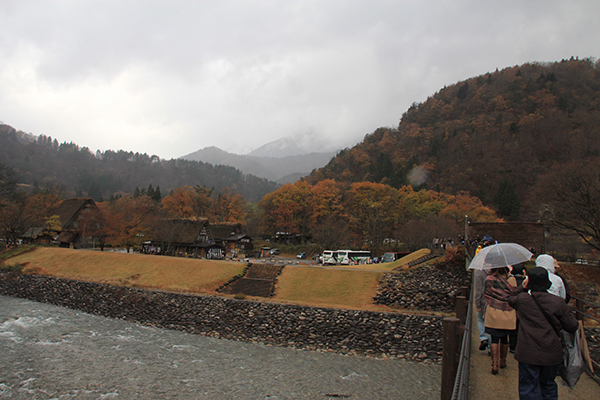 Crossing the Pedestrian Bridge over the Shokawa river

From Ogimachi village to Takayama was about a 45 minute drive and we reached the city at about 2pm. Takayama is a city in the mountainous Hida region of Gifu Prefecture. We had plentiful of time before the end of the day so we decided to visit Takayama Matsuri Yatai Kaikan (Takayama Festival Float Exhibition Hall), the optional item in our itinerary.

When we reached Takayama Matsuri Yatai Kaikan which was supposed to be an exhibition hall showcasing 4 out of the 11 festival floats, we just could not find the hall or the entrance. After making a few rounds we gave up and proceeded to another location where we could see the festival floats. It was Matsuri no Mori (Festival Forest).

The Festival Forest showcases the key aspects of the Takayama Festival which takes place for two days each spring and autumn. The festival is known as one of Japan’s three most beautiful. We took about 20 minutes to get from the exhibition hall to the Festival Forest which was located on a hill. 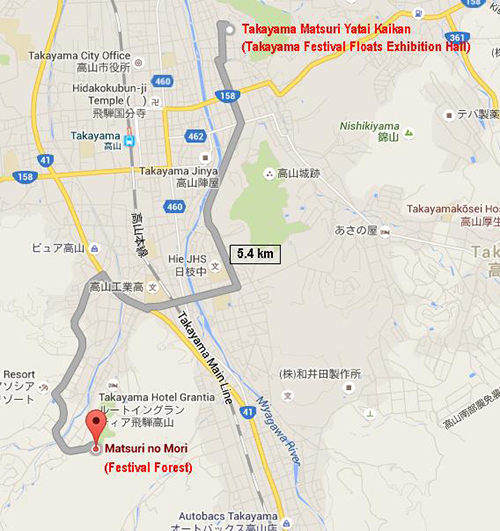 Beside the Festival Forest there was an Insect Forest at the same location but we were not interested in seeing insects so we did not buy the combo ticket for bother the forests. The entrance fee into the Festival Forest was pretty pricey at ¥1000 per person. The opening hour was 9 am to 5 pm so we still had a great deal of time to explore.

The Festival Forest was build into a hill. A huge dome cavity of 20 metre high and 40 metre diameter was dug deep inside a hill and the approach into the dome was a 70 metre long tunnel. In the tunnel and dome were mini size and life-size replicas of the festival floats and gigantic drums. 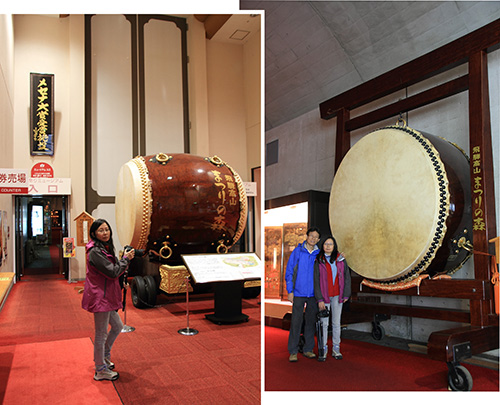 Gigantic Drums a the entrance and in the tunnel 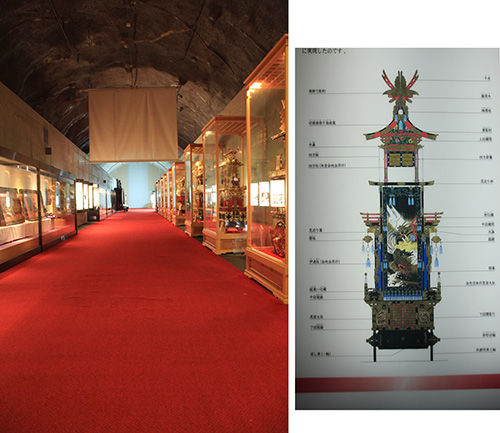 11 miniature replicas of the 11 Festival Floats

As we walked through the 70 metre long tunnel we were captivated by the miniature replicas of the 11 Takayama Festival Floats. The replicas which were only one-third the size of the actual floats were magnificent. Because of their small size we were able to look at their details up close. 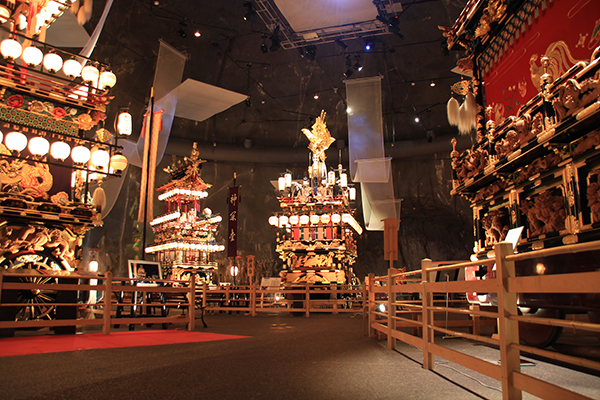 Life size replicas of Festival Floats in the dome

On some of these floats sat mechanised life size puppets dressed in traditional Japanese costumes. Each float would take its turn to put on a performance when its puppets would blow flute or sway to the beats of flute and drum music emitting from the interior of the float.

These puppets gave visitors an idea of the real people that would be sitting on the float during the actual festival parade down the streets of Takayama in spring and autumn. 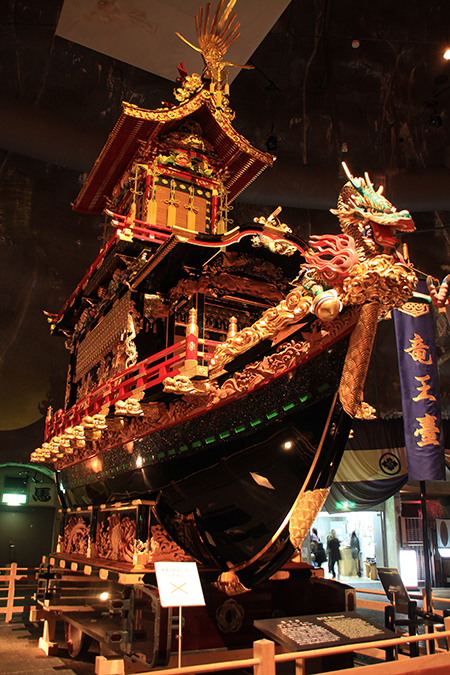 It was a great pity that our timing in Takayama did not coincide with the spring or autumn festival parade dates and we did not have a chance to witness first hand the festival sights. After visiting the festival forest we definitely felt that it was the next best thing to the real festival. 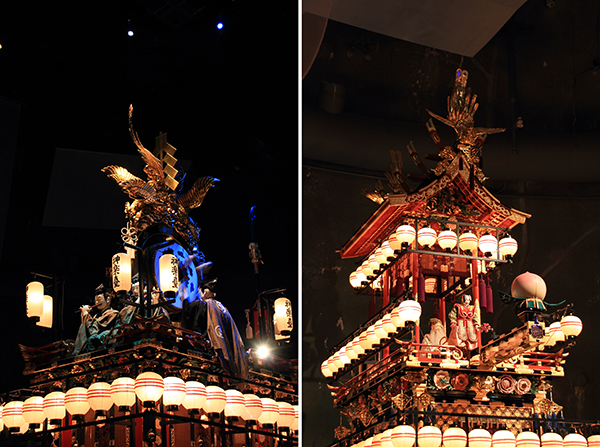 Teabreak and Dinner at Takayama

After the Festival Forest we had no where else to go but to check into our hotel. At about 5pm we left the hotel to explore around its vicinity. The restaurants just beside our hotel were still not opened for dinner.

We headed further down the road to Kokubunji Dori road. This road was full of shops and restaurants and was beautifully decorated for Christmas. Probably because of the drizzling the streets was rather quiet. 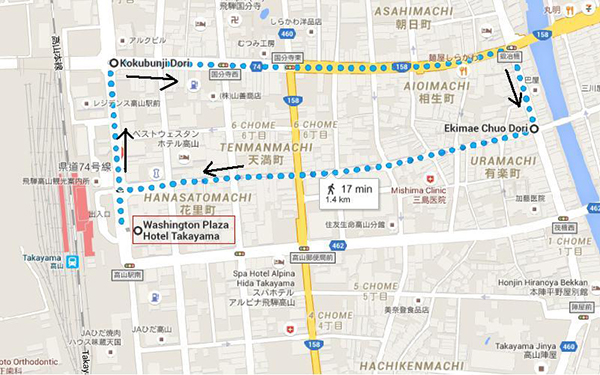 As we walked down the street and passed many restaurants that served Hida beef. Hida beef seemed to be a local specialty. Though the restaurants were not opened for dinner yet, we already picked up the one we intended to come back for our beef dinner! 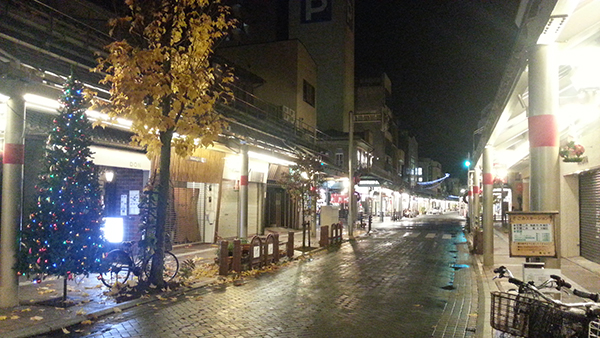 Christmas lighting along the street 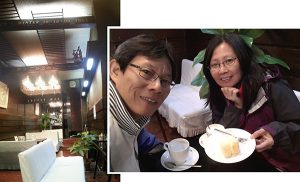 Rather than walking aimlessly down the quiet street we popped into a cafe for latte and cake.

The name of this cafe was called Coffee Don. Its display of cakes on the cafe window attracted our interest and we went in to have our desert before our hida beef dinner.

We waited till near 6pm before leaving the cafe for Yakiniku Raede, the restaurant we had chosen. Yummy Yummy… Hida beef… 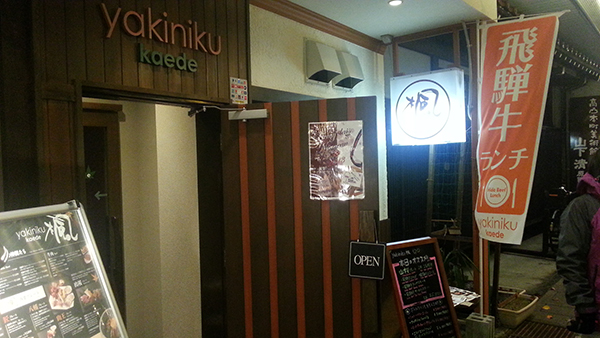 We ordered a Hilda Beef set for two. It was very pricey but we decided to spurge this evening. The beef set cost ¥7050 it consisted of a few pieces of meat from different parts of the cow and a few slices of pumpkin and mushroom.

The waitress briefly explained to us the order of eating the beef pieces probably keeping the most savoury pieces to the last. The beef was highly marbled in texture, very delicious, it practically melt in my mouth. This was the first time I ate such tender, juicy and aromatic beef. 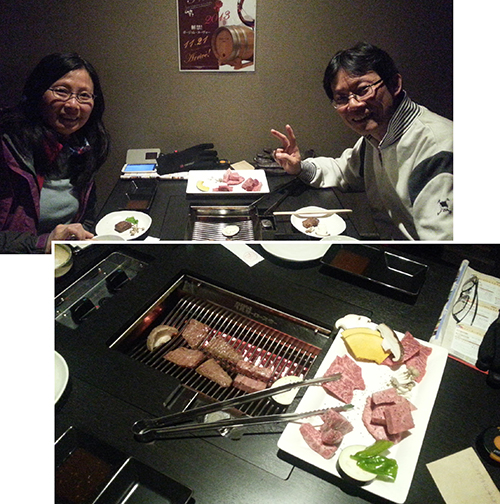 Hida beef (Hida-gyu) is the specific name given to beef from a black-haired Japanese cattle breed that has been raised in Gifu Prefecture for at least 14 months. Hida-gyu is required to have been confirmed and certified as Yield Score of Grade A or B by the Hida Beef Brand Promotion Conference, and have a Firmness and Texture Grade of 5,4 or 3 as graded by the Japan Meat Grading Association. 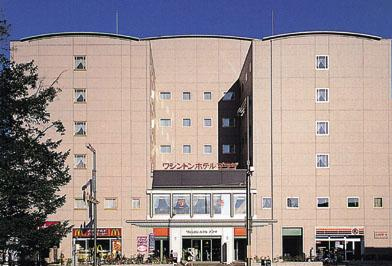 We reserved a twin room with Hilda Takayama

Washington Hotel Plaza at ¥8400 a night with ensuite bathroom and no breakfast. Parking was available nearby at ¥840 a night. Basically the room was clean but the size was tight not much space to move around.

The great thing about this hotel was its location. It was just opposite the station so there were many shops and restaurants in the vicinity.

In the reception area of the hotel there was this red doll-like stuff toy which I also had seen at various other establishments in Takayama.It was later that I found out that this “doll” was called the Sarubobo. It was the mascot of the Hida Region. Sarubobo means “monkey baby”, they were traditionally made by mothers for their daughters as charm blessing happy marriage and smooth birth delivery. It was also said that they can prevent sickness and accident. 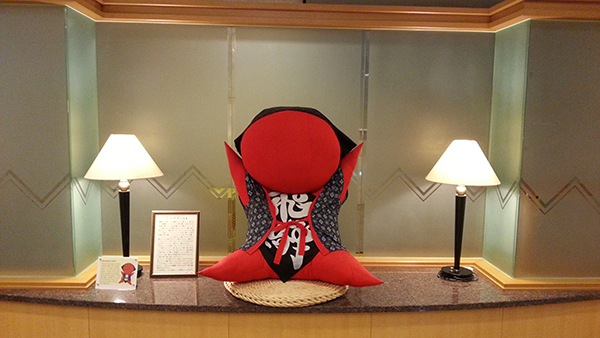