Today we would be driving a very long distance of about 285 km with a total driving duration adding up to 6 hours.

Our first destination would be the post towns in Kiso valley starting from Magome to Narai. We expected to be done with the valley by mid afternoon when we would move on to Matsumoto Castle. After the castle we would drive on the Nagano where we had booked a room with Chisun Grand Nagano for a night.

The driving duration of 6 hours would be broken down into four parts which hopefully would be more manageable. 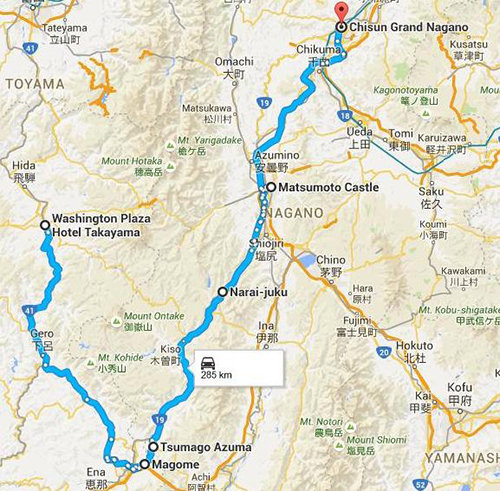 Kiso Valley was situated in the southwestern part of Nagano Prefecture and the Kiso Route which passed through the valley was once a section of the ancient Nakasendo Highway for travelers moving from Kyoto to Edo (present day Tokyo).

Nakasendo Highway was an old post road that passed through 69 posting stations of which 11 post towns were along the Kiso Valley. The Kiso Route passed over deep valleys, threaded and twisted its way around the steep forested mountains with picturesque post towns full of historical charm along the route.

A few of the post towns in the Kiso Route particularly Magome, Tsumago and Narai have been preserved to look as they did when they served travelers in the Edo period, providing them places to rest, eat and accommodation during their arduous journey.

It took us about two and a quarter hours to drive from our hotel to the Magome, the most southern post town in the Kiso Valley. At Magome we were able to find car park easily. 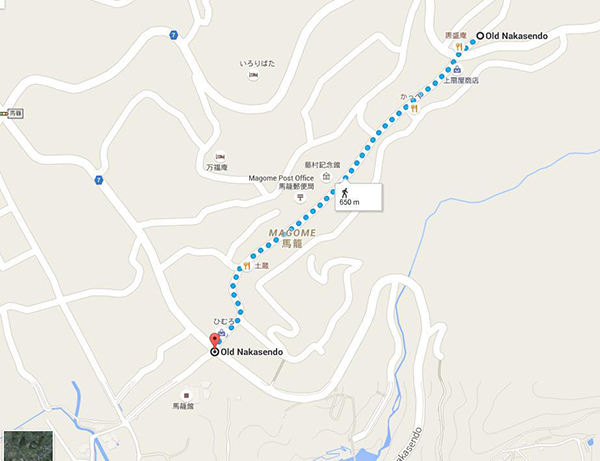 Near the car parks was the main street that cut through the village. This street was closed to traffic, it was a walking path paved with stonse that slope up hill with beautifully well preserved edo period houses on both sides. 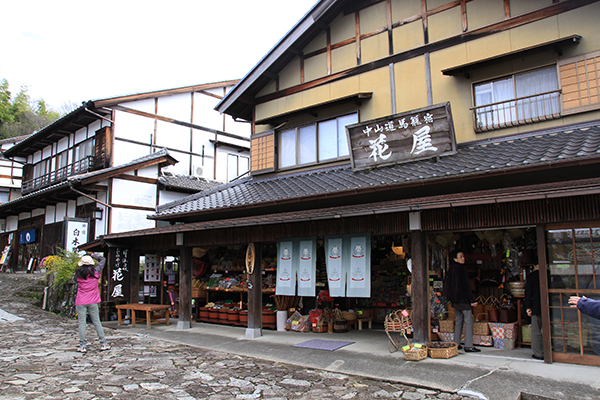 The name of the post town Magome meant “house”+”basket and was derived from the fact that travelers were forced to leave their horses here before tackling the steep climb from Magome to Tsumago (the next town). 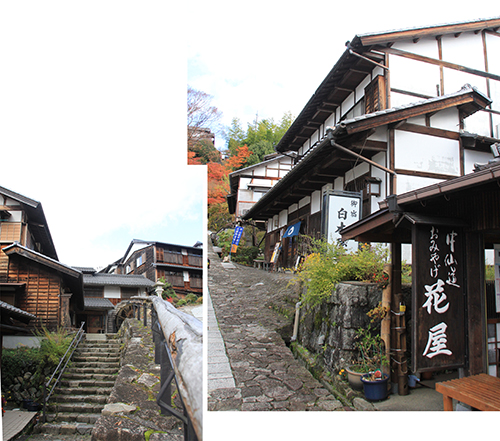 Edo Houses on both sides of the main street 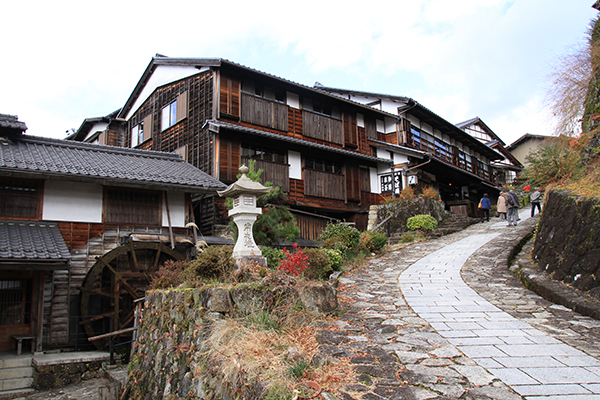 The old street was destroyed by a fire leaving only the stone path and entry gate, however reconstruction had brought back the old style houses that we saw today. Strolling up the main street was fascinating, we felt as thought we had went back to the edo period, 300 years ago. There were no electric street lamps or cables hanging over poles along this street. 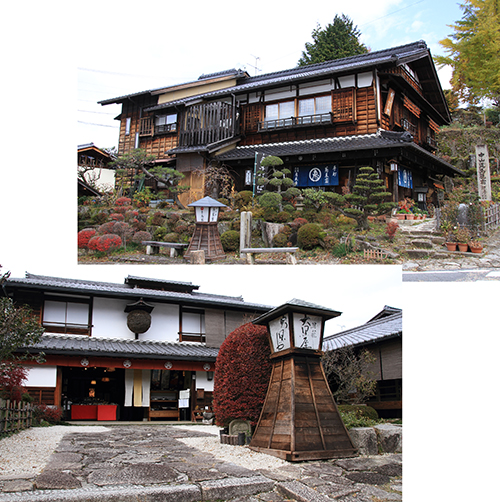 It was most enjoyable to walk along the stone pathed street as there was no vehicle and being a weekday the place was not crowded with visitors. After about 650 metres the stone path led out of town probably going toward the next post town, Tsumago Post Town, which was about 8km away. We decided to turn back and go back for our car. The return trip was now a down slope walk and was equally as enjoyable. 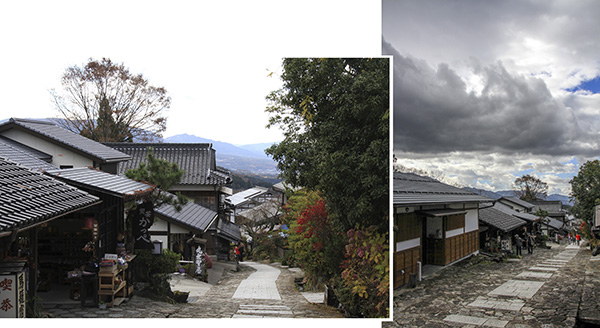 By noon we had completed Magome and was ready to proceed to another post town. We had Tsumago and Narai in our list. Visiting both would leave us very little time or no time for Matsumoto castle, as in autumn daylight hour was short. We decided to drop Tsumago and drive straight to Narai post town. The distance from Magome to Narai was 67 km and the drive took about one and a quarter hour. 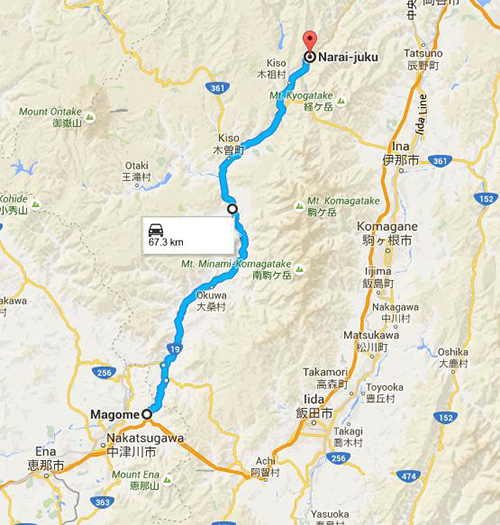 Route from Magome to Narai

On the highway nearing to Narai post town there was a left turnoff into the town, we saw a van turned left so we did the same. We thought that the Narai road system would be similar to that of Magome where we would reach a car park before the “car prohibited road”.

We must have missed the car park and unknowingly we had drove onto the car prohibited road. We got to know about our mistake when a shopkeeper waved at us angrily that was when we realised that the van ahead belonged to a local in Narai town. Local owned vehicles were allowed on this “car prohibited road” , visitor cars were not. Too late we were already on the road and the only way to get off the road was to drive on ahead till we were out of town. 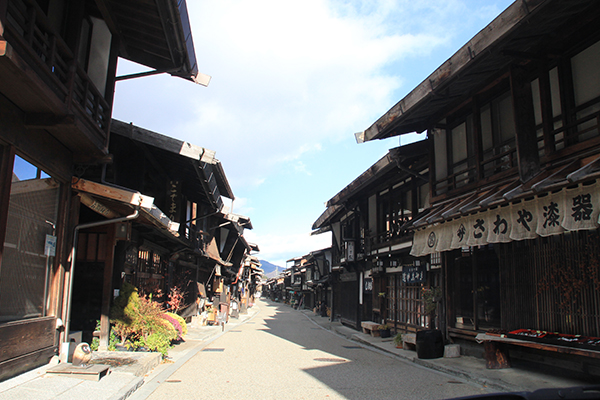 Narai post town looked larger than Magome post town, there were lot more edo houses that lined both sides of the road. The houses were closer to each other and the town seemed more compact. Walking on the street of Magome I felt very relax whereas on the street of Narai it felt clutter and busy even though there was not many people around.

On two sections of the road we could not resist but stopped our car by the road side and came down to take some photo shots. We could not stay long as we were worried about being “shoo off” by the locals again. Eventually the road led us out of town. 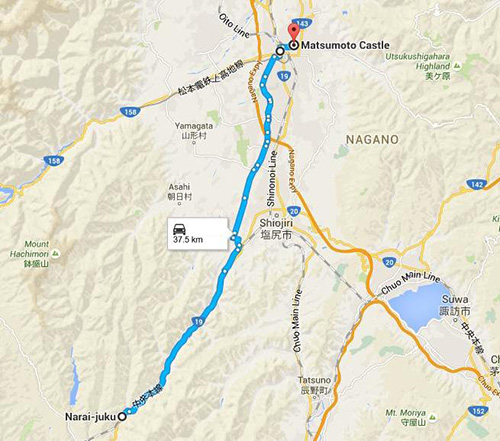 The castle complex was opened from 9 am to 5 pm and the entrance fee was ‎¥610. We had only one hour to go before closing time so rather than to rush through our visit inside the complex we decided to explore the exterior of the castle.

Matsumoto Castle was one of Japan’s oldest surviving castle. It was formerly called Fukashi Castle and was located in the city of Matsumoto in Nagano Prefecture which was probably the reason for its new name. Matsumoto Castle was a flatland castle (hirajiro) and its defences included an extensive system of inter-connecting walls, moats and gatehouses.

We spent the rest of the daylight walking around the outside edge of the moat. We started our walk from entrance/exit 4 and ended at extrance/exit 2. 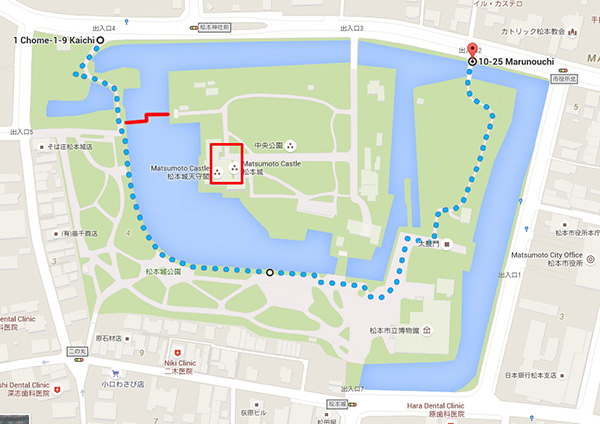 We took many beautiful shots of the castle from different angles. Matsumoto Castle looked magnificent with the moat in the foreground and the beautiful blue sky as its background. As the sun set its slanting rays hit the castle walls and turned the white walls slightly golden. We stood by the edge of the moat enjoying the sight till the sunrays were all gone before leaving Matsumoto Castle for our car. 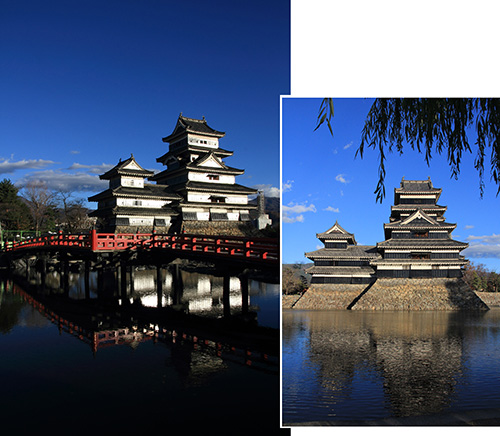 We drove from Matsumoto city to Nagano city where we had booked a room for the night. The distance was 70km and the journey took slightly more than hour. We chose to stay the night at Nagano city rather than Matsumoto to cut down our driving distance for the next day which would be another day of long distance driving. Surprising we were not too tired after driving a total duration of five and a half hours today.

In Nagano, I had booked a grand queen room at Chisun Grand Nagano for ‎¥7200 a night. The room came with ensuite bathroom and parking at ‎¥800 per stay. The room very spacious and comfortable. After many nights of tight hotel room, this room was a great change. 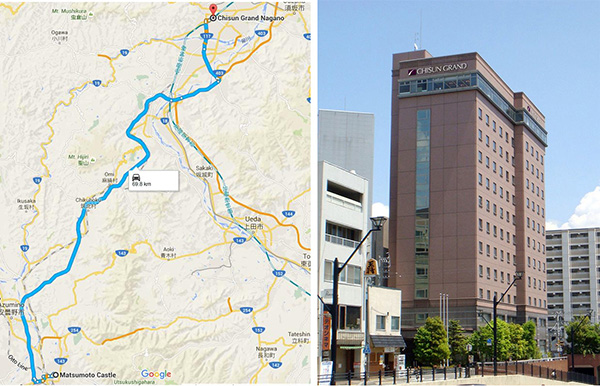