We planned to visit at least three Tokyo attractions by the end of the day, they were:

We would be going to all these attractions by foot and subways. 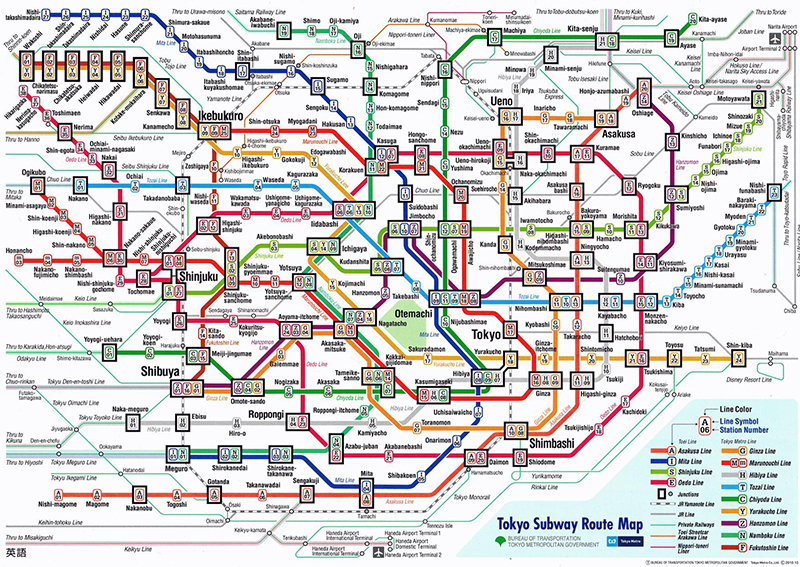 One of the reasons we chose to stay in Ginza Creston Hotel was its proximity to Tsukiji Market. We woke up at 4am and was out of our hotel in 15 mins and walked for about 700 metres to Tsukiji Fish Market. It was so early in the morning and there were hardly any vehicles or people on the road.

We reached the market in 10 minutes and took another 10 minutes to locate the Tsukiji Market Tour office. We were surprise that there was no queue at the office and happily thought we would surely get two of the limited 120 tickets that would be distributed at 5am. Then came the bad new, all the tickets were already given out at 4am. We found out from another visitor who also did not get the ticket that to be assured of a ticket we had to start queuing as early as 3.30am. No way! We were not coming back the next day at 3.30am. We did not think the Tsukiji Fish Market morning tour was worth a 2nd effort. I had seen a documentary program on the Tsukiji Fish Market – fish auctioning activities so I was already familiar with the events that took place in the auctioning hall.

The Tsukiji Fish Market morning tour was in our itinerary because two of my friends who were supposed to be touring Japan with us were very keen on this market tour. Unfortunately they had to cancel their trip with us. Since I had already booked and paid for our room at Ginza Creston Hotel which was booked for the the purpose of the market tour we made the effort to participate in this morning market tour.

It was still early so we walked back to our hotel to continue with our sleep.

View from our Hotel Room

On the 35th floor the view from our room was awesome.  The top down city view was fantastic. We could see very far and wide. 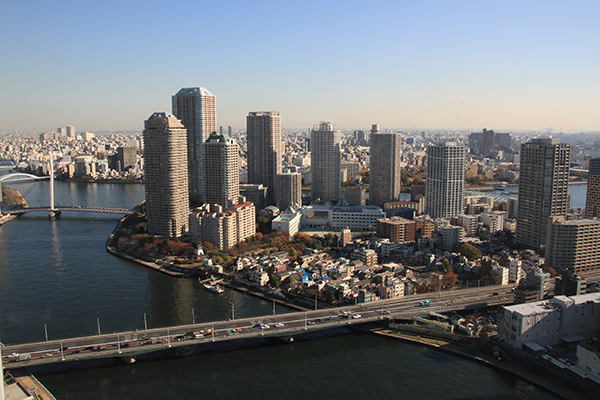 View from our hotel room at Ginza Creston Hotel

We came here not for the sports facilities but to see the famous Gingko trees that lined both sides of the avenue. The leaves of the trees would turn brilliant yellow in color at the end of autumn each year. This brilliant yellow color only lasted a few weeks each year starting from mid November and ending in mid December.

I had timed my visit to this avenue not too early and not too late so that we could enjoy its “koyo” color at its best and we were definite not disappointed. The beauty of this place was the continuously stretch of brilliant yellow trees that lined both sides of the avenue and their yellow colour contrasted well with the equally brilliant blue sky. 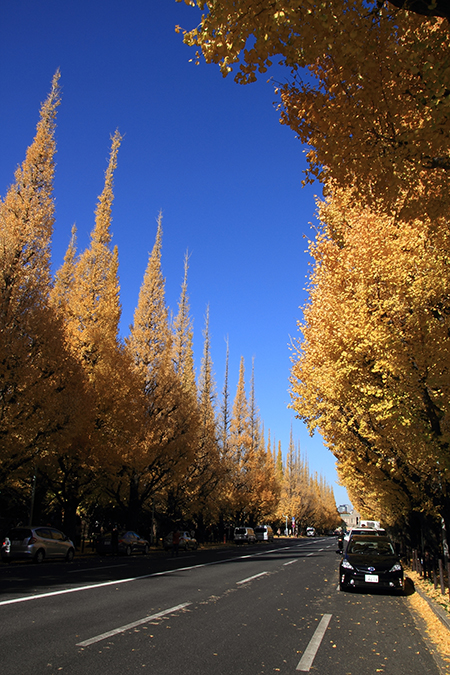 The sidewalks on both sides of the avenues were packed with people and many of these people including us risked our lives to stand in the middle of the road to photograph this beautiful street.

These ginko trees were trimmed into conical shapes and they looked like golden christmas trees.

On one of the sidewalk were cafes and restaurants. And many people were sitting at these outdoor cafes sipping tea and eating cakes & pastries. I approached one of the outdoor cafes to request for a table for hubby and me, we would like to enjoy a cup of aromatic cafe latte in this lovely and romantic sidewalk and watched the crowd walked by under the canopy of yellow leaves. Sadly we were told that we would have to wait for at least two hours for a table to become available. It looked like these outdoor cafes were fully booked in advance. 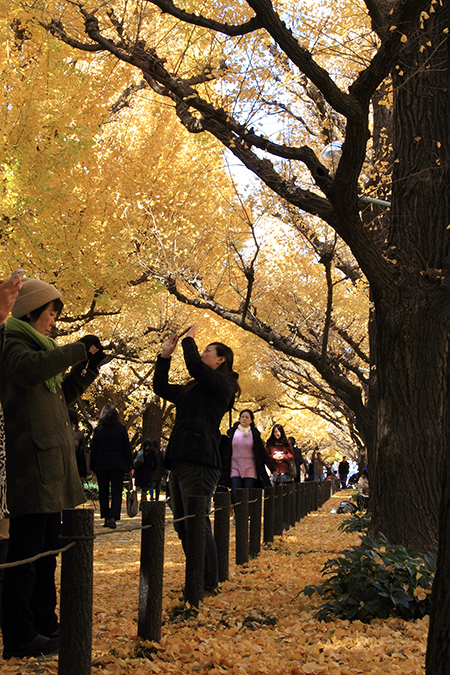 Side walk of Icho Namiki Avenue

I had always wanted to lay on a carpet of yellow leaves and could not resist just doing so after I saw some kids doing it. After one and a half hours we left Icho Namiki Avenue to move on to Yoyogi Park our next Koyo destination in Tokyo. 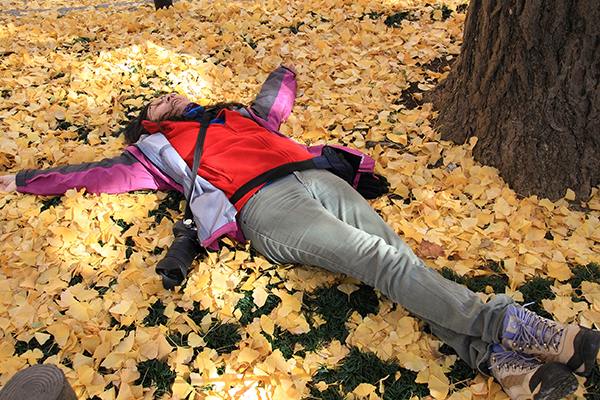 A bed of Gingko leaves

After Icho Namiki Avenue we walked westward to Yoyogi Koen (Yoyogi Park). The distance was about 2.5 km. 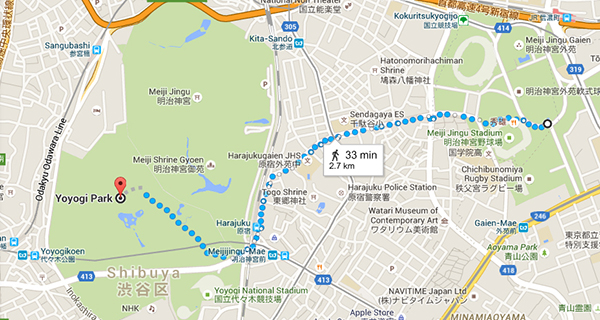 Midway into our walk we saw a busy shopping street Takeshita Street. This street looked vibrant and interesting so we detoured into the street.

There were many trendy shops and street stalls selling all kinds of interesting and weird things from clothing to accessories to souvenirs etc etc. This place seemed very popular with youngsters as we saw more young people than oldies. 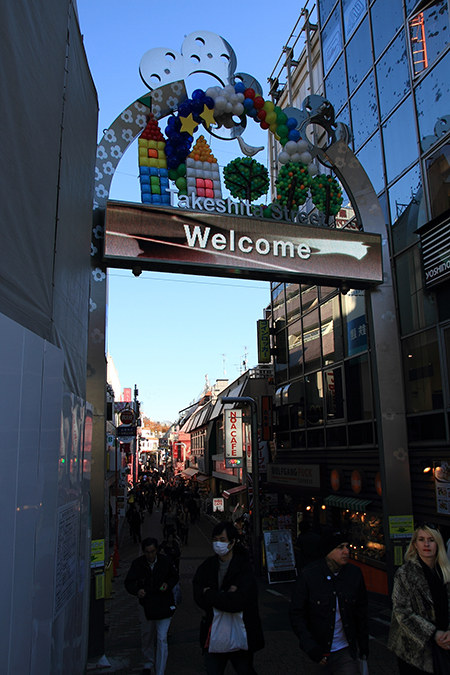 Besides fashion boutiques there were food stalls and restaurants everywhere. Fast food, coffee, ice cream, crepes and etc etc. Yummy Yummy! I just could not resist the street food so even though I was not hungry I still ended up buying some crepes, some ice creams and two cups of hot cafe lattes from several shops. Eating and drinking as we walked down the street. 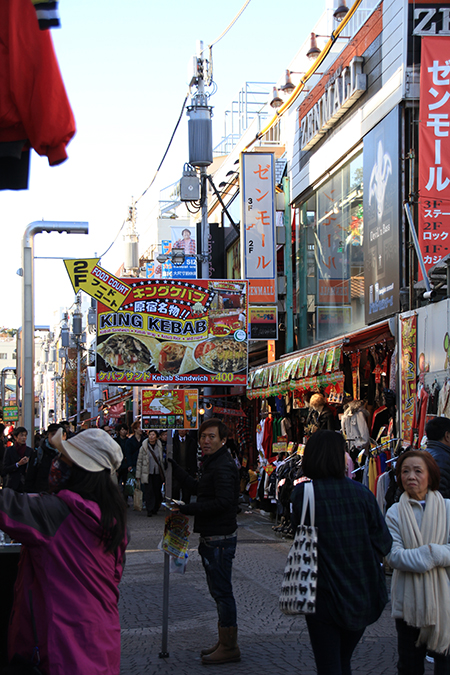 Apparently this street was geared toward teenage crowd. There were a lot of very cute stuffs… too overly cute for us. There were fashions from princess style to goth style. All kinds of jewelleries and hair accessories.

In my mind I thought my daughter would really love this place, there were so many girly things to buy. Besides food I did not buy any other things but even without buying anything it was very fun window shopping.

I would not had purposely included a visit to Takeshita street in my itinerary unless my children came on this trip with us. But since we chanced upon this street it would be ashamed not to explore it.

This unexpected detour took about two hours which would mean we would had lesser time for Yoyogi park. Anyway no regrets, this visit was well worth it as it had given us a glimpse of the subculture of Japanese youngsters.

From Takeshita Street to Yoyogi Park entrance was about 400 metres. This was a huge park full of trees. At first I was not keen to visit this city park but after I saw some beautiful photos of its autumn scenery I changed my mind.

We walked toward the southern side of the park and from far we could see a forest of intense yellow trees. These were gingko trees and there was a couple of hundreds of them. The ground were covered with yellow leaves and there were lots and lots of them.

The sun was setting and its rays made the leaves glows. This place was so beautiful and captivating and because there was not much people the yellow ground looked extra wide. I wished I had a picnic basket with me. 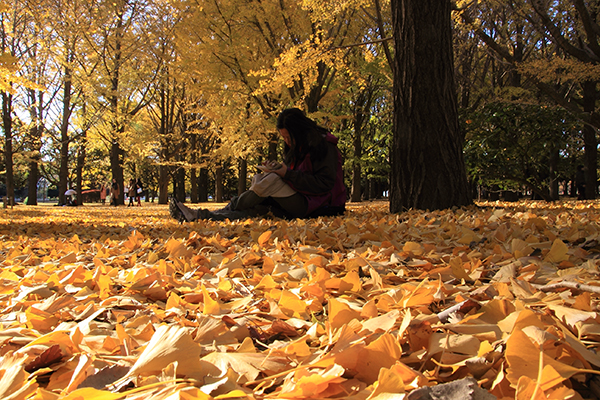 Surfing Internet below a Gingko trees

Simple Dinner and Back to Hotel 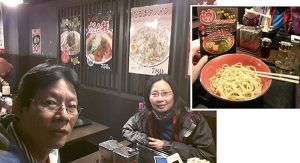 We ate simple ramen dinner before heading back to our hotel using the subway. By the time we stepped into our room we were felt very exhausted. Though we did not walk a great deal but somehow my feet felt very worn out. My mistake was not bringing another pair of shoes for city walking, I had been walking around the city in my high ankle trekking shoes somehow they made my feet tired. Though we were in our hotel our sightseeing had not ended yet because the view of city lights from our room on the 35th floor was even more spectacular than in the day. Our room looked over Samida River of Tokyo and there were many bridges over the river. This river runs through Tokyo and is about 27 km long. There are about 26 bridges over the river working out to be about a bridge for every km run.

From our room we could spot five bridges and each bridges had its own unique style. In the night these bridges were lighted up and each took on a different color. 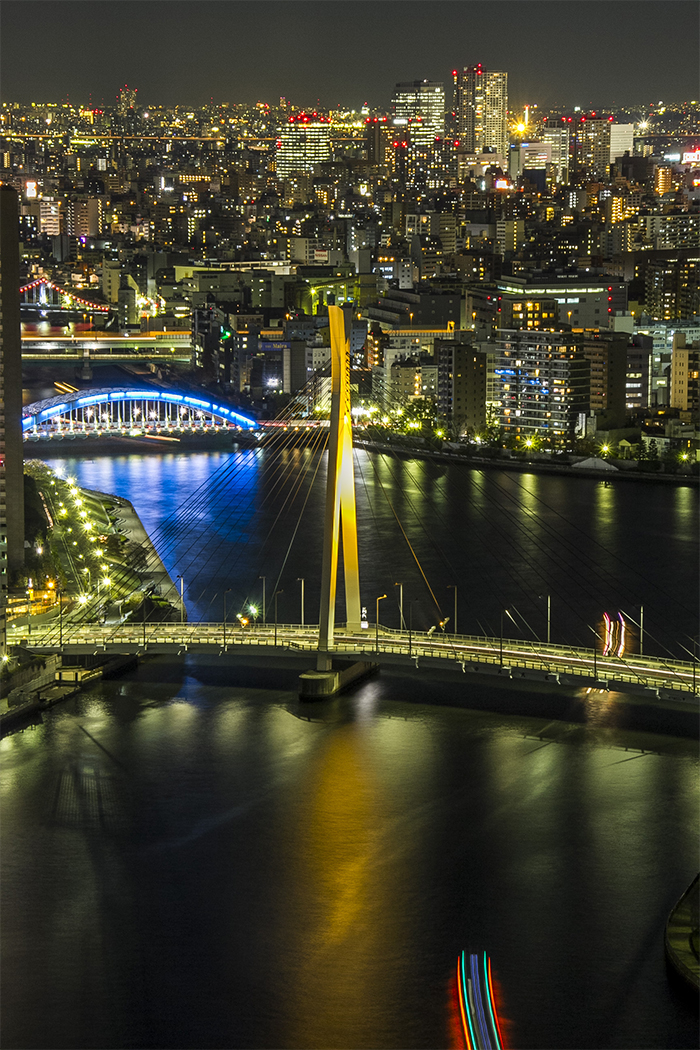 Night View from our Hotel Room

I loved staying on a high floor whenever we were in a city because the day views, the evening views and the night views of the city could be very beautiful and we could enjoy all these views leisurely in our room. 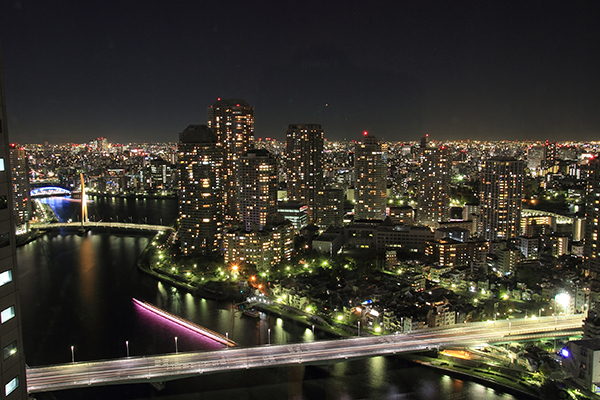 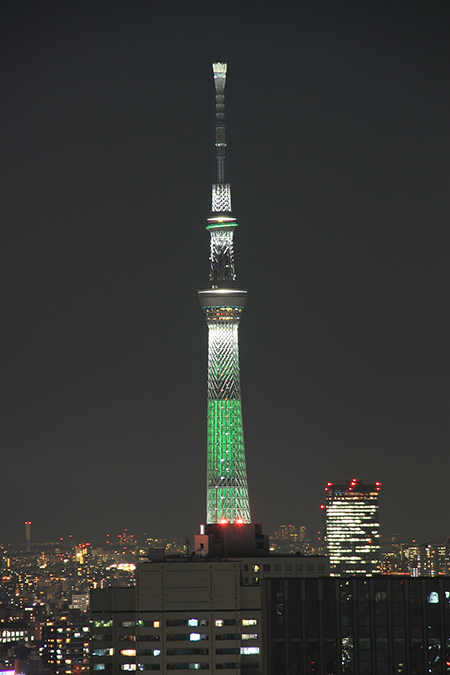