Today would be our very last full day of sightseeing in Tokyo. All the must-see attractions of Tokyo in our list had already been visited as for the rest they were optional visits.We wanted to have an easy day so we picked out only two attractions to visit. The first one was Ginza shopping district and the second was Odaiba a prominent shopping district in Tokyo. 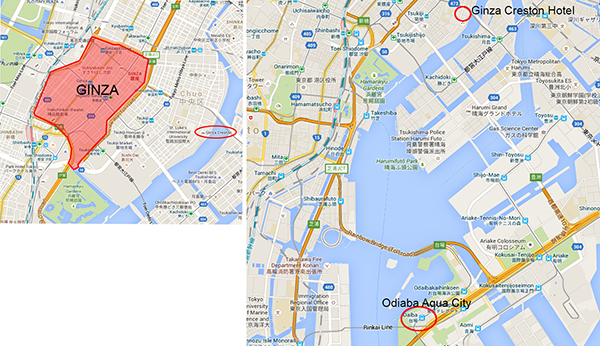 It was a short walk from our hotel to Ginza. In less than 15 minutes we reached the main road, Chuo Dori, of Ginza district.

Shops after shops, malls after malls lined both sides of the road. I had one shop in mind and that was Uniqlo my favourite casual clothing brand. 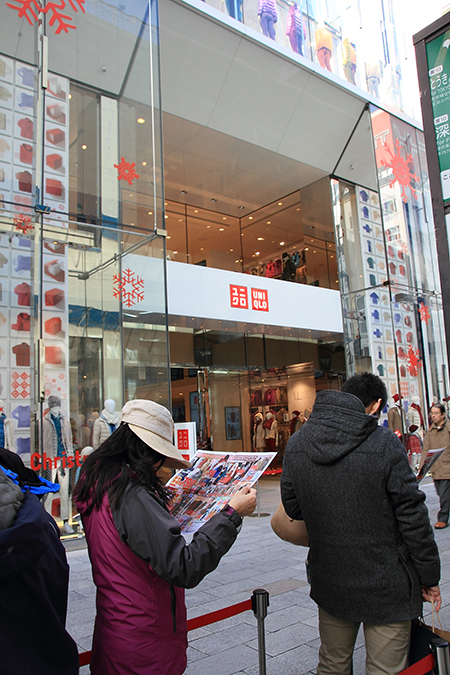 Queuing Outside Uniqlo at Ginza

Uniqlo started in Japan and now had outlets all over Asia. Uniqlo Ginza was a nine levels store and had a huge collections of t-shirts, jeans, cold clothes, shorts, pants etc etc. At 10.30am there was already a long queue outside its store which would open at 11am. The store staff came out to distribute the “sale” pamplet. Those items on sales were very cheap and were heavily discounted.

The store opened on time and I explored level by level and bought several cashmere tops. Price-wise the cost of the clothing were about the same as those sold in Singapore. Variety-wise the collection was so much more than that back home.

At about noon, I started to see people walking on to the road. Outdoor cafes set out tables and chairs in the middle of the road for their patrons. The road was closed to vehicle and was turned into a large pedestrian walkway from noon to 5pm on weekends! 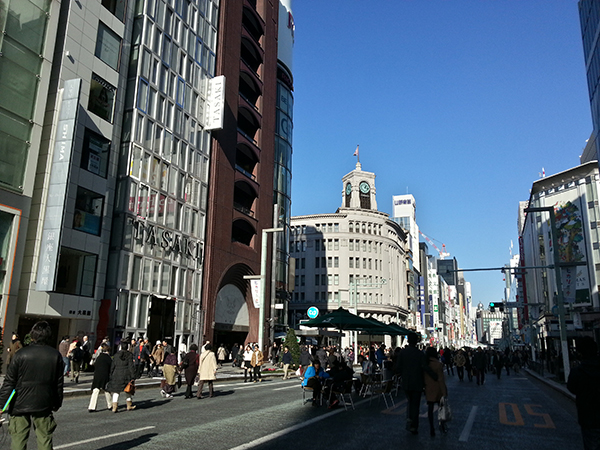 Ginza is Tokyo’s most famous upmarket shopping, dining and entertainment district. Every international brands in clothes and cosmetics could be found on this street. We found a restaurant and ate our lunch before heading back to our hotel for a rest. 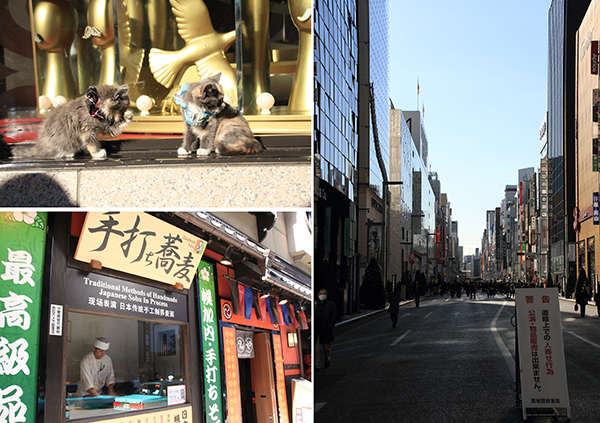 At about 3pm we set out to Odaiba from our hotel. There were several subway routes to get to Odaiba but instead of taking the shortest route I decided on a longer one as it would take us to Odaiba via the Rainbow Bridge. Using Google Map I had my route mapped out. It gave me all the details like the station to start, the station to change train and the station to get off. It was much simpler to use technology than to ask people. 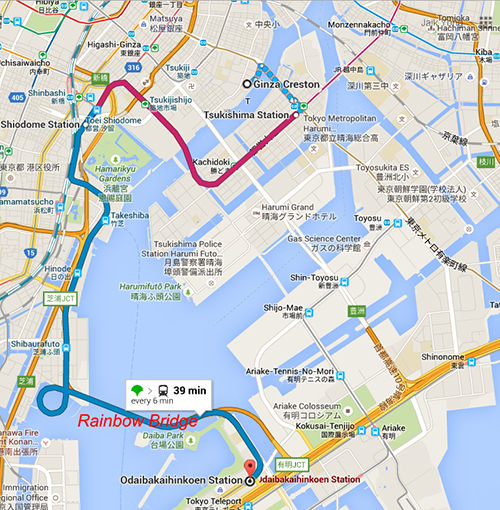 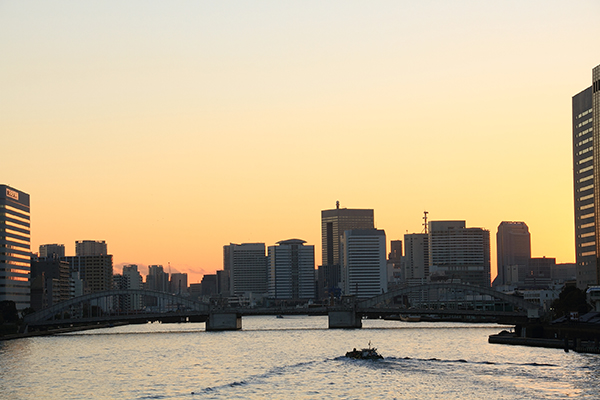 Odaiba was a huge shopping and entertainment district built on a man made island in Tokyo Bay. We walked over Odaiba seaside where we saw a beautifully lighted Tokyo Rainbow bridge. 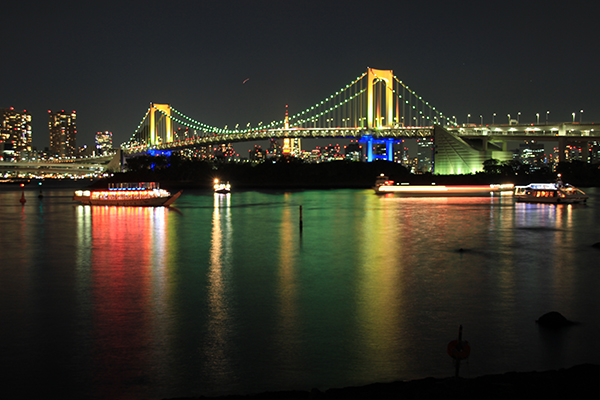 It was Saturday evening and there was a huge crowd on Deck Odaiba. Many people was standing on the deck waiting for something to happen. One English foreigner working in Japan told us that every Saturday evening there would be a firework display over the river. So we waited and at about 7pm the firework started. 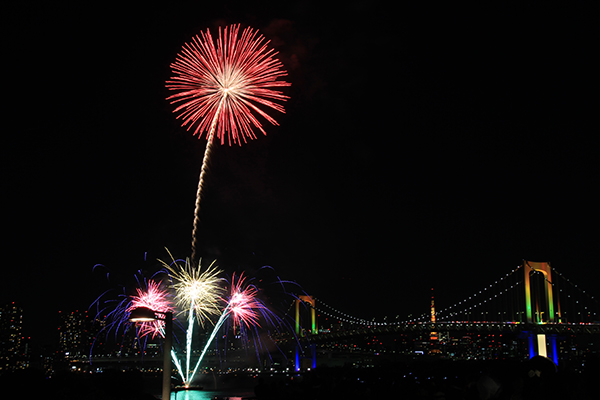 This 10 minutes firework was an event that took place every Saturday night from end November to end December. We were lucky that we visited Odaiba on Saturday night and not the night before. 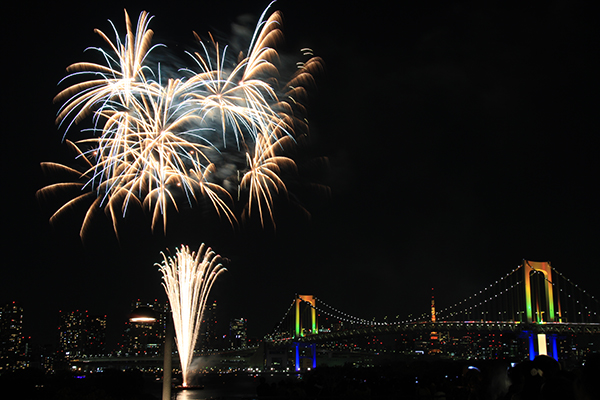 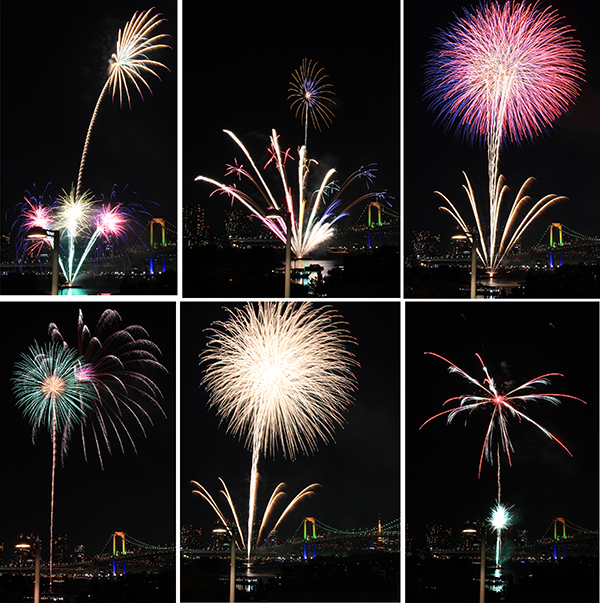 The firework was very beautiful each shooting of a firework looked like a flower in the sky and with the Rainbow bridge and Samida River as the backdrop a normal firework looked extraordinary.

After the firework we went in Aqua City to look for dinner. Aqua City was a huge shopping complex, it was packed with people. Every restaurants we went there were long queue of patrons waiting outside for an available table. We had to stand in line and waited for close to an hour before being seated and another half an hour before our meals arrived on our table.

After dinner we returned to the hotel by subway, this time we took the route that looped back to our hotel the other way. 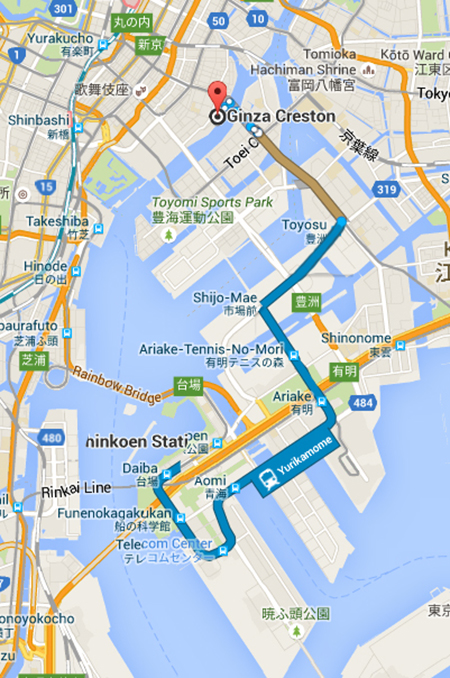