Today was supposed to be a very simple day. We would leave our hotel very early at about 5.30 am, board the plane, transit at Ho Chi Minh City and touch down in Singapore by about 7 pm in the evening.

It was unfortunate that things did not went as planned. On the flip side to have problems only on the final day could be considered fortunate as we had already completed all our sightseeing. 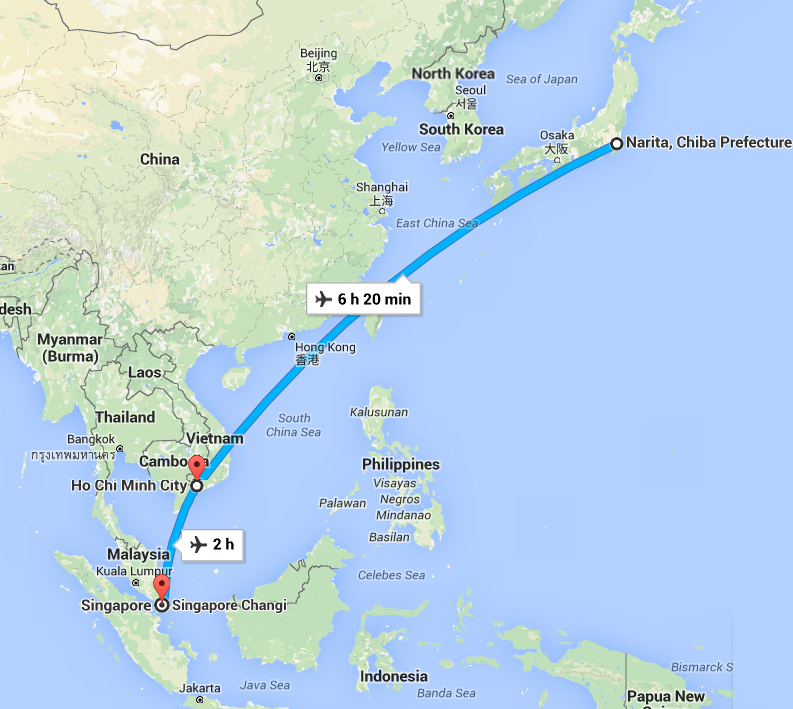 Getting to Narita International Airport

We left our hotel at about 5.30 am and walked for about 15 minutes to Tsukiji Station from there we took the subway to Ueno station then took a 6 minutes walk to Keisei Ueno station. We bought the Skyliner train and went straight to Narita Airport. The Skyliner train was very comfortable and fell asleep in the 50 minutes journey.

There were several ways to get to the airport, all the ways were expensive. Our subway train fee was ¥2,640 per person, compared to the other modes of transport (bus and limousine) its cost was in the mid range and the journey one of the shortest.

At the airport we checked in our luggage and got our boarding passes. We went to post (return) the mobile wifi to Japan wireless. After dropping our package in the post box we went in search for food. After a while I realised I lost my boarding pass, luckily we did not have to go through a lot of trouble to get a replacement at the airline counter.

We had a long wait at the boarding gate and one hour after boarding time we were still sitting outside the boarding gate. Everybody was getting very impatient but we still did not get any explanation from the airline staff. We got “engine problem”! After another hour we were ushered off to an airport hotel and told that to wait for news on when we could fly off.

At the hotel we were given two meal vouchers (lunch and dinner) and told to stay and wait for news as to when our flight would be available again. We thought off taking a free hotel shuttle service to a nearby shopping mall for some afternoon shopping but were told by the hotel receptionist that it would be at the risk of missing the flight if one became available.

I hated this uncertainty, Vietnam Airlines should be more proactive in telling us when would be the next available flight rather then made us ‘prisoners’ in the hotel. It was the most boring and time wasting wait of 12 hours before we were informed at 9 pm in the evening that our flight out of Narita would be at 8.50 am the next morning. After getting the news at 9 pm it was too late to go late night shopping! What a waste of time!

We arrived in Singapore a day (24 hours) late. My hubby had to take another day of leave as he could not start work as planned. The extra one night of hotel stay and two meals were paid for by Vietnam Airlines. For the 24 hours delay we got $400/person compensation from our travel insurance.

All in our trip took 17 days (including the one day delay). It was a wonderful trip one that outstripped my expectation many folds. The autumn scenery was magical, we achieved our targets 99% of the time, we did not get lost, we enjoyed the food and we enjoyed the orderly Japanese cultural and environment.