Our plan for the second day in Athens was to visit the New Acropolis Museum in the morning and to walk around town in the afternoon. In the evening we intended to explore Filapappou hill to take some night shots of The Acropolis.

We started the day early and walked from our apartment to the nearest subway station Kepameikoy Station. On our way there we were surprised to see a cafe already opened for business.

Getting to New Acropolis Museum by subway

Yesterday which was a Saturday morning, we found all the shops from the subway to our apartment closed in the early morning so we had to miss an early breakfast. I assumed that for today we would face the same situation and go hungry till mid morning. 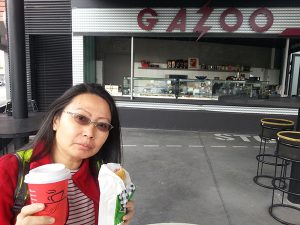 Since Gazoo was opened and though I was not keen on its small offering of food, we bought sausage bun and cafe latte. The bun was boring, it had only one simple sausage in the middle with no garnishing at all and there was no joy eating it.

At the station we took a while figuring out how to get our tickets to Acropolis Station, the station nearest to the Acropolis Museum. Though this was our second subway trip, it was not a straight forward journey as it involved changing from M3 subway line to M2 subway line.

We did not understand or read Greek so on the subway journey we had to count our stops to the interchange. At the interchange we also took a while to figure out the correct platform for the M2 line, so as not to go in the opposite direction.

We alighted at Acropolis Station and could easily tell what we were definitely in the correct place because inside the station we saw many exhibits (replicas) on display. 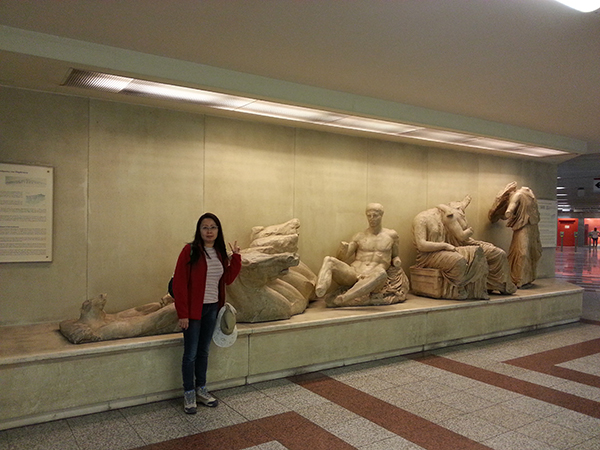 The station exit to the museum was about 100 metres apart and along this short stretch we saw many stores selling all kinds of delightful food for breakfast. Oh! how I regretted eating the sausage bun earlier on. The food sold here looked so delicious and savoury that I could not resist stopping for a second round of breakfast. Six sense must have told me not to eat too much earlier on or I would be too full for a second breakfast.

The Acropolis Museum was also called the New Acropolis Museum, it was an archaeological museum housing every artifacts found on Acropolis of Athens and at the foot of the rock from the Greek Bronze Age to Roman and Byzantine Athens. 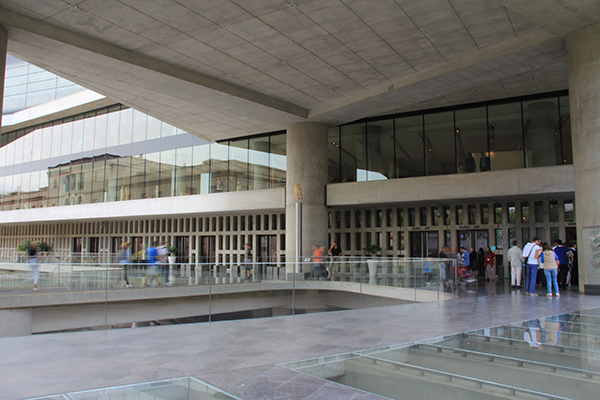 Entrance to the Museum

The building was very big and modern and the entrance level was a glass floor built over an archaeological dig. The museum lied on top of the archaeological site of Makrygianni and the ruins of a part of Roman and early Byzantine Athens. It was amazing to look through the glass floor to the excavation dig below. 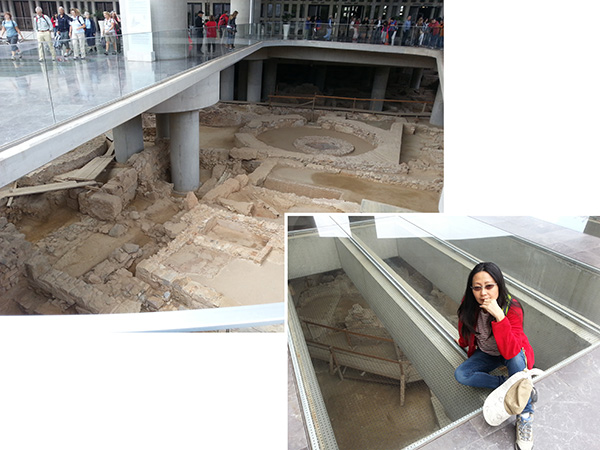 Museum over an ancient digs

My husband and I were not keen visitors of museums, though a friend had told us that we must visit the museum we were still in a dilemma before this visit. Now that I had seen the museum I definitely must say that my visit to The Acropolis would be incomplete if I had not followed up with a visit to the Acropolis Museum. 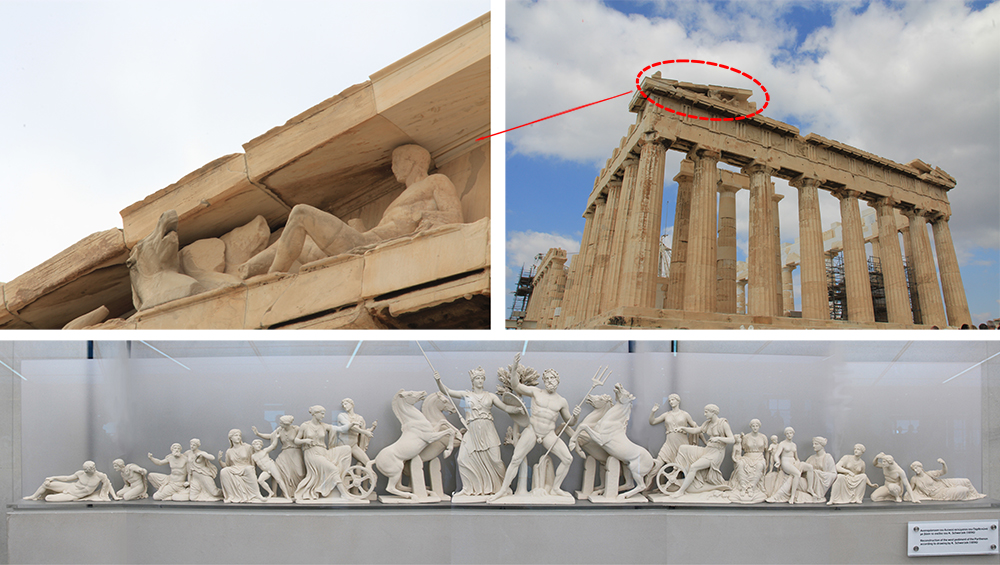 A minature pediment of the Parthenon with all the statues of gods and goddesses.

The Acropolis being a ruins had many missing parts. A lot of these missing parts were on display in the museum. Some of them were authentic and many others were replicas of the originals that were taken out of the country. Originals or replicas they helped to complete my visual of The Acropolis. 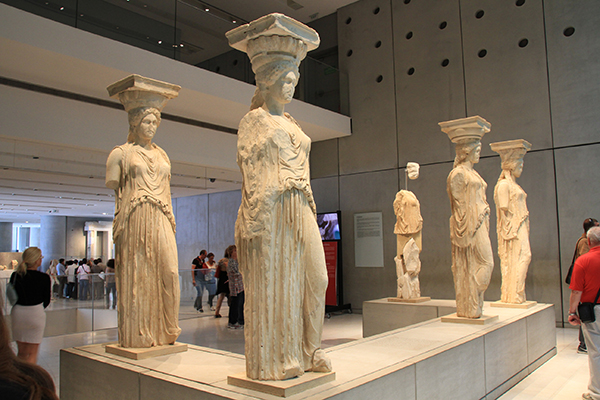 The famous Caryatids of Erechtheion

Acropolis was built some 2500 years ago, its started as a Greek temple but later became a church and during the Ottoman’s rule it became a mosque. Each change brought destruction to the temple as some sculptures that were accepted by one religion were not acceptable by another.

In 1687 Acropolis suffered a huge explosion that blew off its roof and destroyed a large portion of its sculptures. By 1800 only half the original sculptures remained. Then between 1801 to 1805 Lord Elgin, the British ambassador to the Ottoman Empire that ruled Athens, acting with the full knowledge and permission of the Ottoman authorities, removed about half of the remaining sculptures and brought them to England.

As I viewed the exhibits, I came across many displays with labels printed “BM” (British Museum) which indicated the location of their originals. Wow, a huge collections of the originals were in the British Museum. 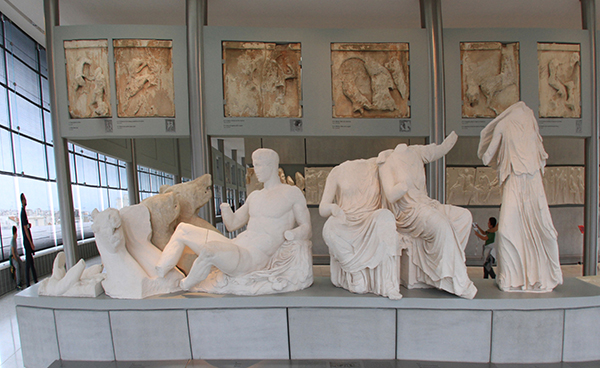 I particularly like the Parthenon Gallery on the 3rd level of the museum. The layout of the gallery mirrored the real Parthenon in exact dimension and orientation. Each exhibit was positioned in Parthenon gallery in the same position as it would stand in the real Parthenon.

In the museum, I was lucky to encounter a group of American students with their History professor. The professor was going into the details of Greek mythology as he guided the students from exhibits to exhibits. I adjusted my walking pace to stay slightly behind them unashamedly eavesdropped on his lecture and learned a great deal about the Greek gods and goddesses.

This morning while on the way to Acropolis Museum we had to change subway line at Syntagma Square Interchange. Syntagma Square meant constitution square so this place should be the pulse of Athens.

On our return trip after the museum visit we stopped at Syntagma Square Interchange and exit the station to explore the place. We walked up to the road level and was greeted by the sight of a huge majestic building with a Greek national flag flying at its apex. This was the Parliament Building. 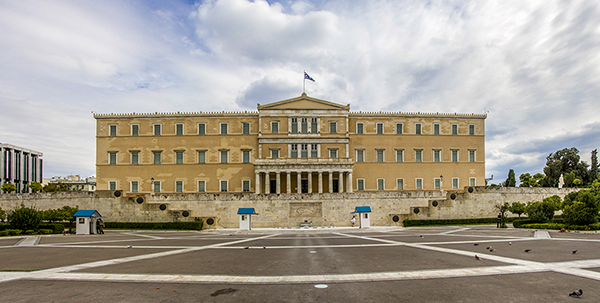 Near to the steps leading up to the parliament house were two blue top guard houses and two guards (Evzones) dressed in traditional white kilts, red caps with a long black strands of rope like material and red clogs with pompoms. We were so lucky to be at the parliament house on Sunday because it was only on Sunday and on special days that the guards were dressed in their traditional attires. 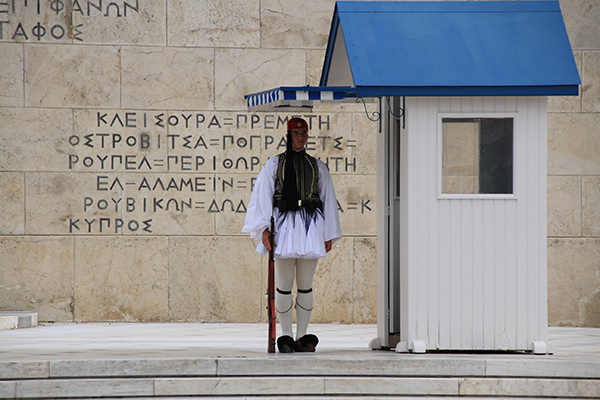 The guards did not stand in their guard houses the whole time, both of them would make scheduled marches at interval in the open compound outside the parliament building. These guards took their duties very seriously they stood in a very stiff posture and stared ahead with blank expression. When they marched they lifted their legs straight with no bending at the knees.

Interesting there was another soldier dressed in green army uniform, he would move around wiping off perspiration from the Evzones’ faces, straightening their caps and attires and serving cold drinks to the Evones when they returned to the guard houses.

The Evzone guard duty lasted one hour each time. On the hour starting at 11 am, there was a guards changing process where more Evones would march out escorting two new guards. They would perform a short marching routine before exchanging the guards and marching out with the two “old” guards. 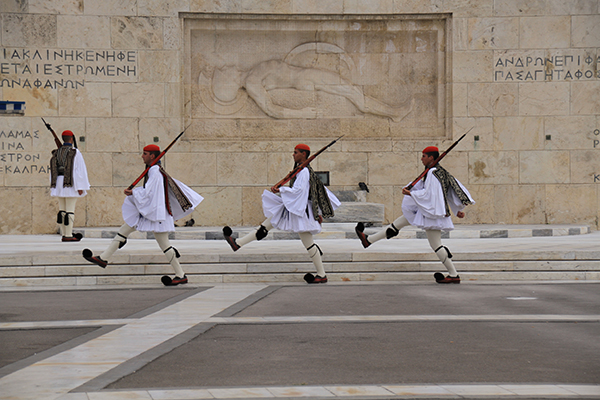 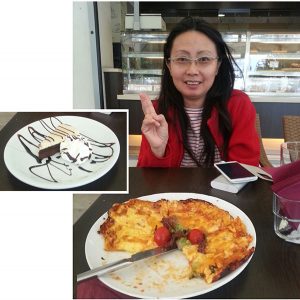 The square was directly opposite the parliament building separated by a road. The square was sunken below the road level. It had a huge simple fountain in its center and trees planted all round to provide a shady environment. It was a weekend and yet the square was rather quiet and peaceful.

We ate our lunch at one of the restaurants that lined one side of the square. We ate Greek pizza and cake with ice cream topping. It was quite pleasant to relax, eat our lunch and surf the internet using the free wifi provided by the restaurant. The meal costed about €20 and water was free.

It seemed that free wifi was the must have feature in a Greek restaurant. It was common to see a “free wifi” signboard outside each restaurant.

On the map I noticed that Filopappou Hill was opposite The Acropolis and on further investigation found several online posts mentioning about the night view of The Acropolis as viewed from Filopapou Hill.

So Filopappou Hill became one of my destinations in my itinerary. The hill was within a walking distance from our apartment so after a good rest from the day activity, we left our apartment again at about 6 pm in the evening before the sun set and walked toward Filopappou hill.

We took the same route that we had walked the day before to get to The Acropolis. But instead of turning left to the base of Acropolis we turned right. 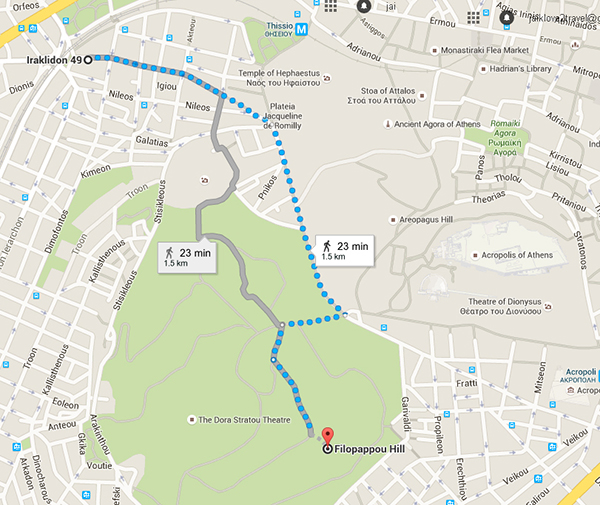 There were no signboard pointing the way to the top of the hill so we asked a passerby for direction. It was a 500 metres up hill walk which was not too difficult as there was walkway with proper steps. It was only when we reached nearer to the top that the steps disappeared and the ground became more uneven to walk on.

At the highest point of the hill was the Philopappos Monument. This grave monument was built in 115 AD and was dedicated to the exiled Roman Prince Gaius Julius Antichus Philopappos of Commagene, a region in ancient Armenia. 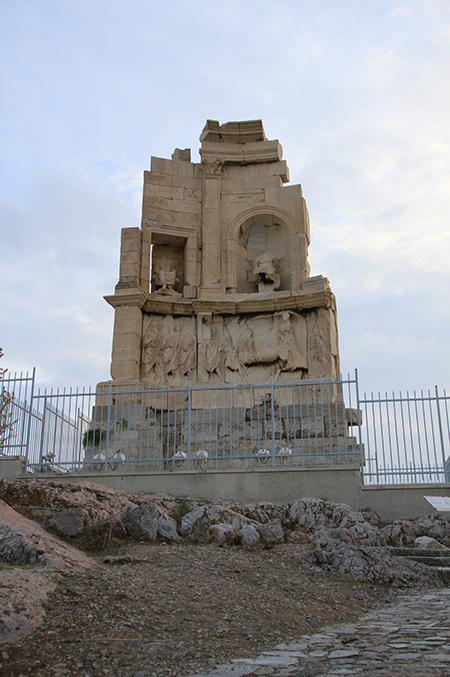 After his exiled, the prince settled in Athens and held religious and civil offices. He was held in high esteem by the residents and considered a great benefactor. The name of this hill Filopappou or Philopappos was named after the prince.

From the top of the hill looking westward we could see the city of Athens all the way to the Aegean Sea that stretched into the horizon. It was amazing to see houses tightly packed into strips of land with main roads that ran so straight all the way to the sea. This view was a bonus reward that we did not expect when we embarked on this walk up the hill. 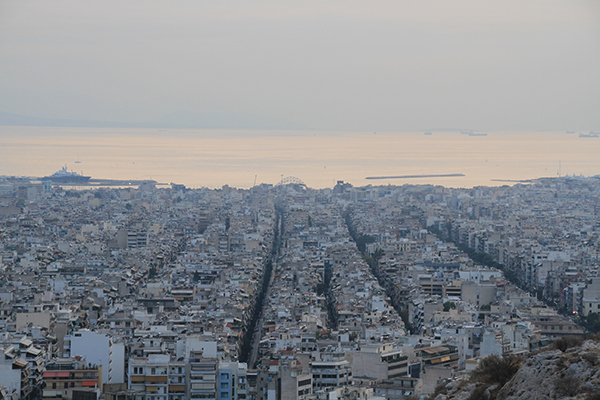 Athens all the way to Aegean Sea

Looking eastward from Filopappou hill we saw The Acropolis. From where we stood, The Acropolis looked like a heavenly temple overlooking the millions of mortal dwellings at its foot. 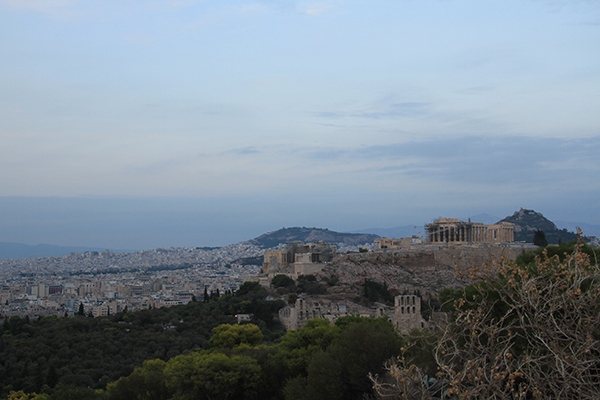 Beside us there were several other people on the hill top and we were all waiting for the sun to set. Finally the lights came on and the sights were beautiful. 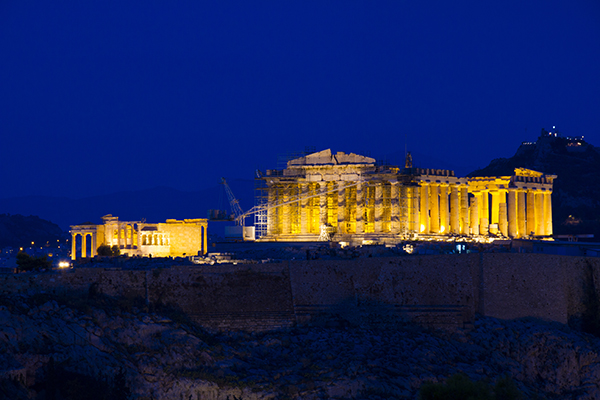 Night view of The Acropolis

Coming down the hill was a bit tricky as there were no lamp posts on the hill and the path was not lighted so we had to rely on our phone torch lights to navigate our way down. After we were safely back to our apartment, my husband told me that for a while he was a bit worried about our safety as we came done the hill in the dark. We should have come down earlier before the whole place became totally deserted.

Dinner at a Greek Grill

We looked near our apartment for a restaurant that served Greek food and found a Greek Grill restaurant just across the road, about 100 metres away. We ordered lettuce salad and a grilled meat dish (pork and lamb). The grilled meat dish came with pita and the same vegetable that was in our salad. If I had knew that upfront I would had ordered a different salad. The meal was delicious and it was a nice end to a wonderful day in Athens. 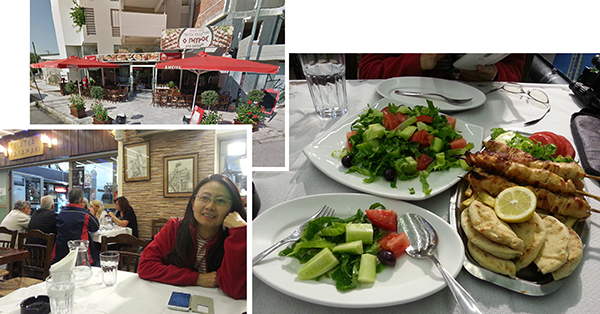