The Plan for the day

We would fly into Mykonos and spent two days on the island. The first day we would focus on sightseeing Mykonos town and the next day we would visit the outskirt towns and beaches. 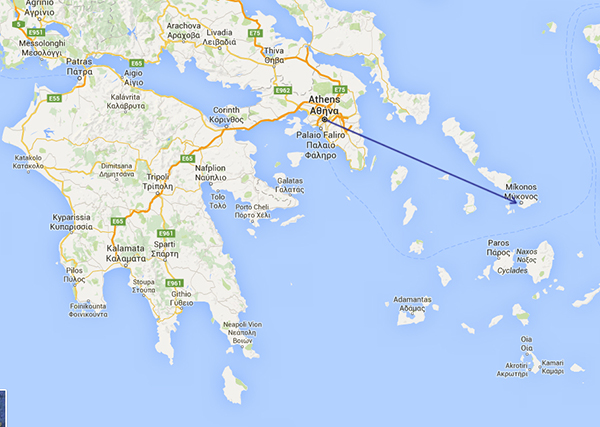 Flying from Athens to Mykonos

I had considered both flying and sailing to the Aegean island but in the end I had chosen to fly because I did not see much cost saving and advantages by sailing to Mykonos.

Our flight from Athens to Mykonos was €60 one way per person with Olympic Air which included a check-in luggage. The boat trip would cost about the same price and the journey three time as long.

I had booked an early 8 am flight for Mykonos so as to have a full day to explore the island. At 6 am we left our apartment and walked to Kepameikoy Station and took a subway train right to the airport. The flight was only 45 minutes and by 9 am we had already exited Mykonos airport and picked up our rental car at the Airport Avis Car Rental office. 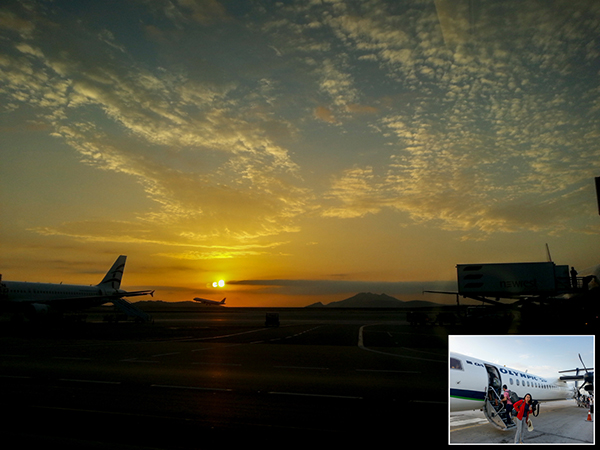 Our rental car was reserved online and the cost was €77 for two full days. The Avis staff was a very friendly old man and he jokingly told us that the “war” was over. He told us that if we had come to Mykonos a month earlier we would have to drive with extreme care because the roads were jam packed with cars and tourists and it was very common to have car returned with bumps and scratches. Rental cars in Mykonos did not come with GPS but luckily Mykonos was small island so it was easy to navigate using paper map. 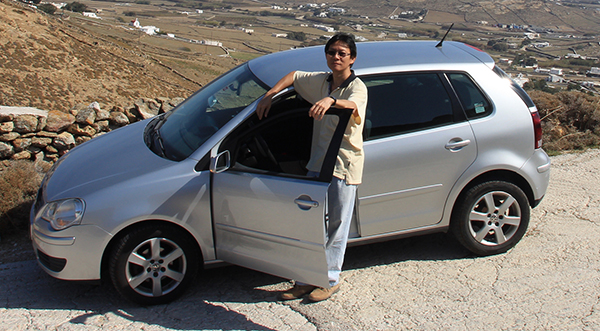 Our rental car from Avis

I had considered renting a ATV bike (for two) which seemed like a popular mode of transportation for tourists in Mykonos but decided against it. 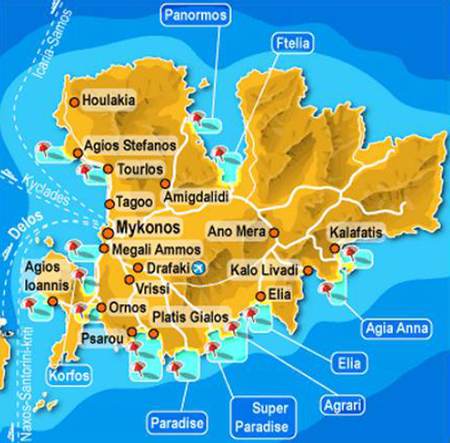 Though riding a ATV bike might seem fun, the rental charges was not cheaper than that of a car and it was so much less comfortable and slower. Since we intended to explore the whole island, a car would be a better option. Though the local car rental companies offered cheaper rental rate, I had came across many posts on the internet mentioning cases of bad rental practices and ripoff by local companies and that made me decided to go with only international car rental company.

There were many cases when the cars were in such bad condition that they broke down afterward. The local rental companies refused to provide a free replacement creating a lot of frustration and wasted time for the tourists. All this inconvenience was definitely not worth the cheaper car rental rates.

Our first sightseeing destination was the famous Windmills of Mykonos. It was located at the edge of the Mykonos town and its distance from the airport was about 2.5 km. 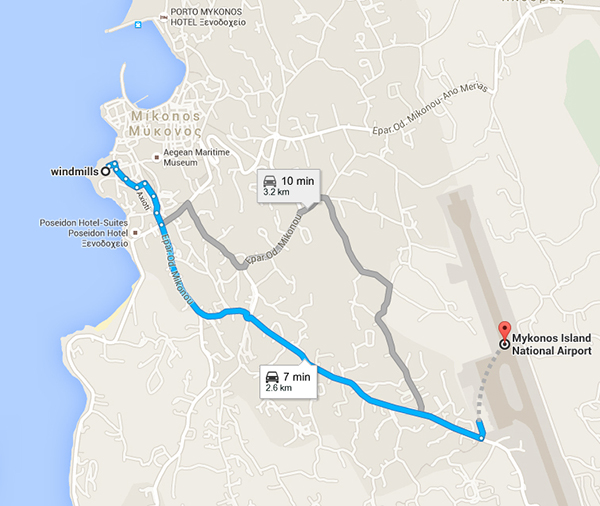 There was a carpark just behind the windmills and it was free of charge. When we walked to the front of the windmills we were overwhelmed by the scenery  we saw in front of us.The scene in front of us was much prettier than those postcard pictures of Mykonos Windmills. The blue sky, the white windmills, the sand and the sea was absolutely stunning. 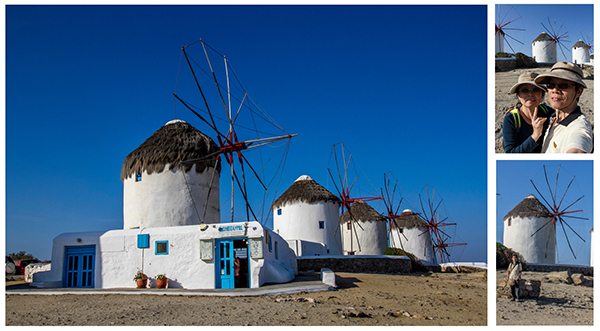 Leaving our car in the carpark behind the Mykonos Windmills we walked to the town center to see the other attractions of the Mykonos town. 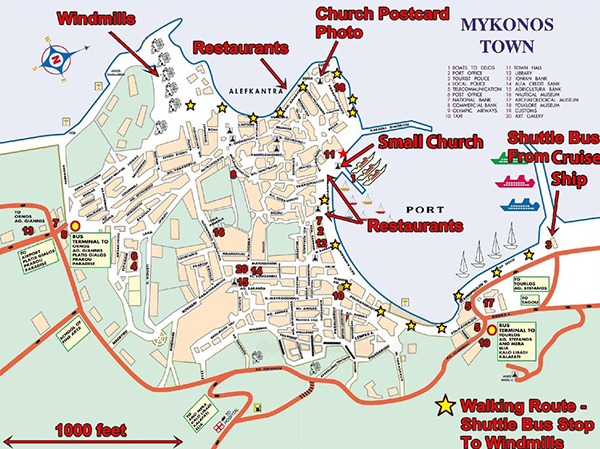 Based on the town map that I had downloaded from the internet it looked like all these attractions were reachable on foot. From the windmills we just had to walk along the waterfront all the way to the old port to see these attractions.

A couple of metres from the Windmills was Alefkandra, nicknamed the “Little Venice”. The view of the many restaurants bordering the waterfront were very picturesque, they looked as if they were floating on the water. 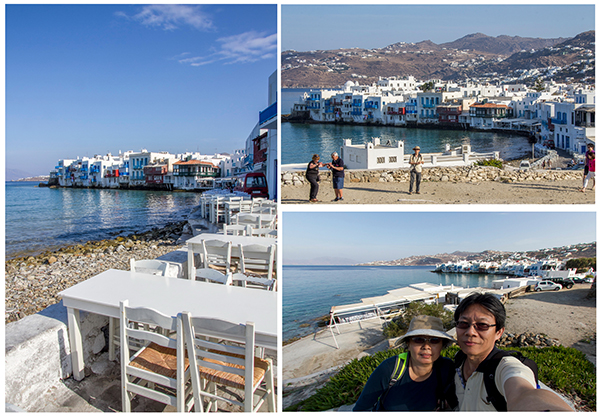 After “Little Venice” we via right into narrow alley franked by two storey low houses on both sides.

The wooden frames, doors, wooden balconies of most houses were painted blue and they contrasted beautifully with the white colored walls. The alley walkways were laid with stones and the gaps between these stones were painted white to bring out the grayness of the stones. Houses after houses they were painted with the same uniform theme of white and blue, this made the town looked uniquely beautiful.

The alley led to the old port waterfront where there were more shops and restaurants. Many tourists were dining and others were basking in the sun on the sand and some were in the water. 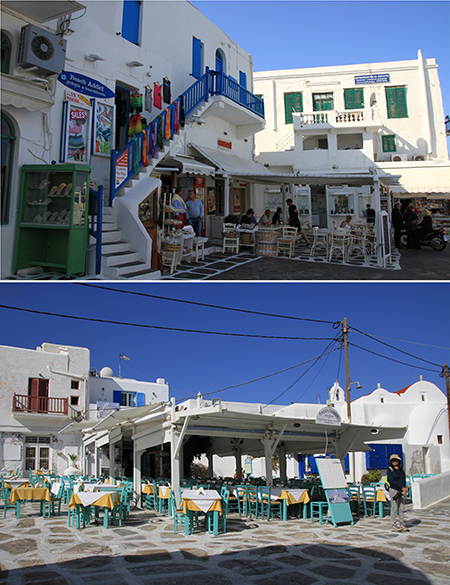 At the old port we saw a several ferry companies and I walked into one to buy tickets for our ride to Santorini two days later. Unfortunately we were told that the tickets we wanted were sold out for the whole week. I was very surprised because on the internet I read that there would be plentiful of tickets outside the tourist peak season. It seemed that where the Greek islands hopping cruises were concerned early October was still considered peak season. In the end we made some changes in our plan and took an alternative route to Santorini. 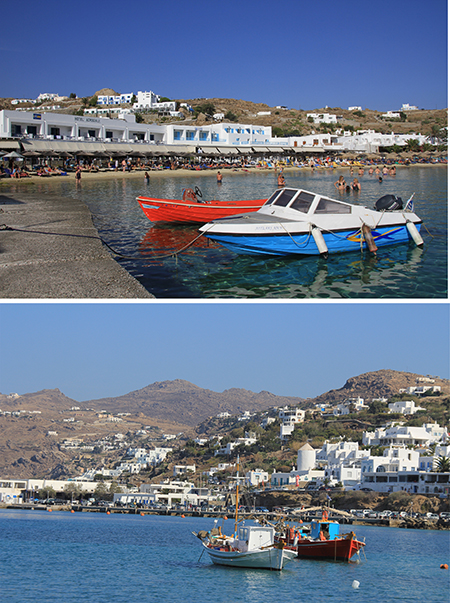 The cruise boat did not call at Mykonos Port, the nearest port that it would stop was Naxos Port which was another Aegean Island near to Mykonos.   Our original plan was to travel by SeaJets catamaran to Naxos and from Naxos to board the Blue Star Ferry cruise to Santorini.

Before arriving on Mykonos I had researched for Germanos shop on the island and found that there was only one. 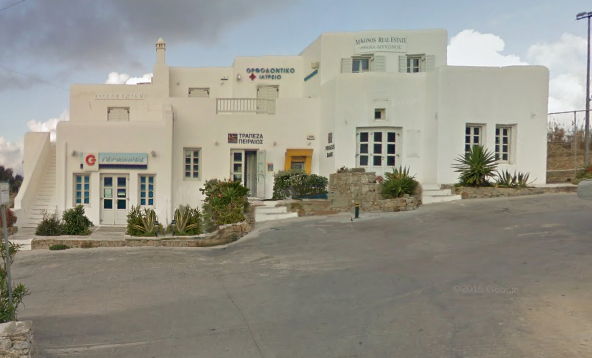 Finally after being in Greece for 3 days, I was able to buy a data sim card. I bought a 3G(15 days) data sim card for €30. We figured that after the 15 days we could top up the card with another 2G(5 days) for €18. That should be sufficient to cover our internet needs for the rest of the days in our trip. I installed the data sim card in my spare phone and activated its hotspot feature, then both my husband and I connected our other mobile devices to the hotspot SSID and instantly we had internet access.

Whenever we travelled DIY I felt more assure when I had 24/7 internet access as I felt that with it I would always be able to find my way around. I would be more confident to explore new areas, areas that I had not done any research on prior to my trip. Applications such as Google map, google translate, chrome were very important to me during my travel.

Mykonos is an island so we figured that somewhere on this island we would be able to see great sunset view over the Aegean sea. We came prepared for sunset shots and I had the sunset timing at my finger tips.

So an hour before sunset we drove westward searching for some nice spots. We found one and waited for the sun to set and took some beautiful pictures. 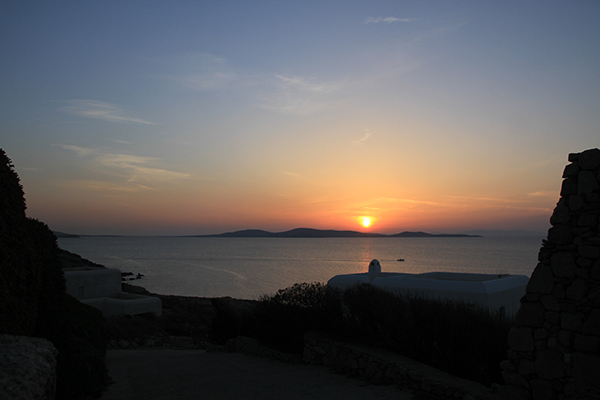 We drove back to the famous Windmills after the sun gone down to take more photoshots of them at night. The night scene was very different from the day scene, beautiful in its own way. The cloudless sky with a full moon that night had also played a part in enhancing the beauty of the night scenery. 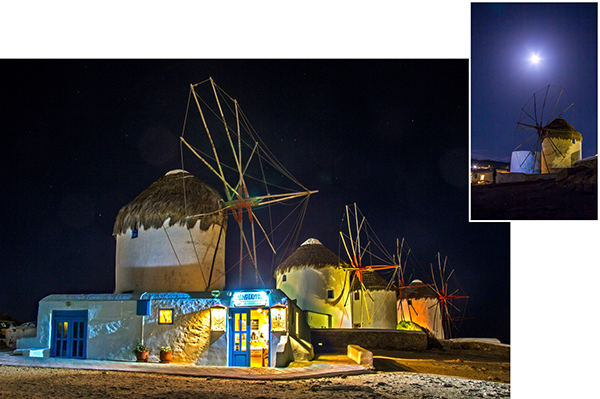 Our Accomodation for two nights

We had booked to stay at Akrotiraki Hotel for two nights. This is a small hotel located just along the coast, 1.2 km from the Windmills of Mykonos. 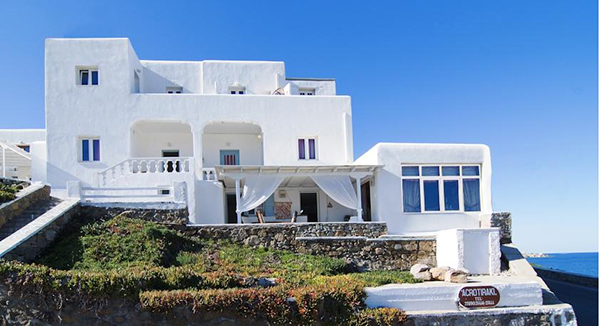 Sometimes in the afternoon we had already checked in and dropped our luggage in our room. Our room came with a double bed and a ensuite toilet with shower. The cost was €63 (inclusive of tax) for two nights that included breakfast.

The room was clean, bright and airy. Our hotel was on a raised ground just beside the road which ran along the coast. Standing outside the door of our unit which was on the ground floor we could see the gorgeous blue Aegean sea on our left and the Mykonos Town in front.

This hotel was indeed value for money.