We planned to spend the whole morning and the early afternoon exploring Corfu. At 2 pm we would leave Corfu for Igoumenitsa Port. From the port we would o drive to Ioannina Lake. 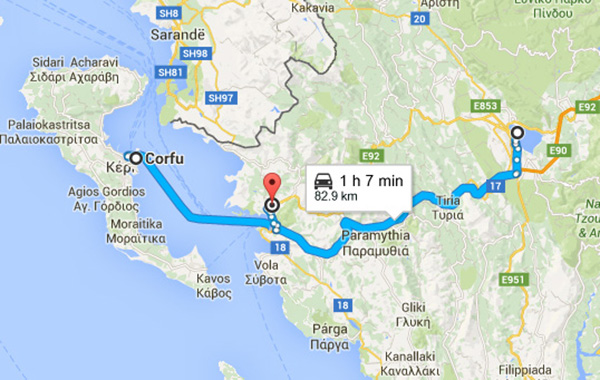 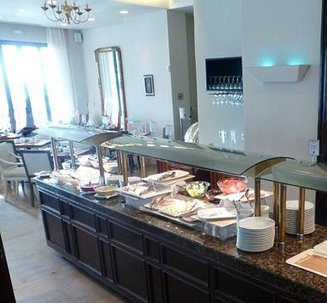 Breakfast was great! The spread was large and there were cooked dishes, cold meats, pastries, breads, cereals, fruits, cheeses, yoghurts and many more. I did not expect such a feast of a breakfast and could not resist trying every dishes.

We had a wonderful breakfast, the staff were most attentive and their services were good. I almost wished we could stay another day.

Aquis Mon Repos Palace ArtHotel was full of surprises, it was definitely way above our expectation for the price we had paid.

Our first sightseeing destination was Vlacherna Monastery. We drove southward from our hotel for about 3.3 km and reached the monastery in less than 10 minutes.

There was two viewpoints to view the monastery, one at water edge and the other from the top of a hill. We decided to start at the water edge. The road led us to a carpark facing the water. We saw a white monastery and a very tall tree on an island.

The view of this monastery in its tranquil water background was absolutely stunning, it was no wonder that this view was considered as one of the most photographed landmarks of Corfu. 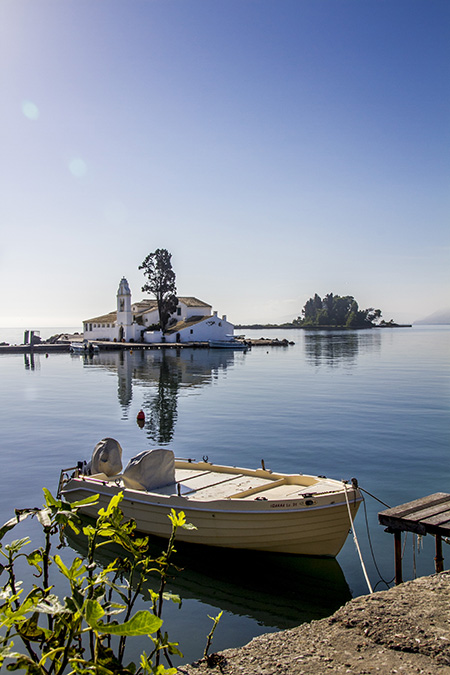 The monastery was built in the 17th century on a little rocky island called Vlacherna. This monastery was a women’s monastery. The scene of the Vlancherna Monastery was very picturesque. It was a good thing that the water was calm as it provided a nice reflection of the monastery.

What I had not expected was having a runway so near to the monastery. Every 5 to 10 minutes we would see a plane fly in for a landing or taking off.

From the first carpark there was a stairs leading up to Cafe Kanoni that sat on the hill overlooking the water. This cafe was the second viewpoint for the monastery. 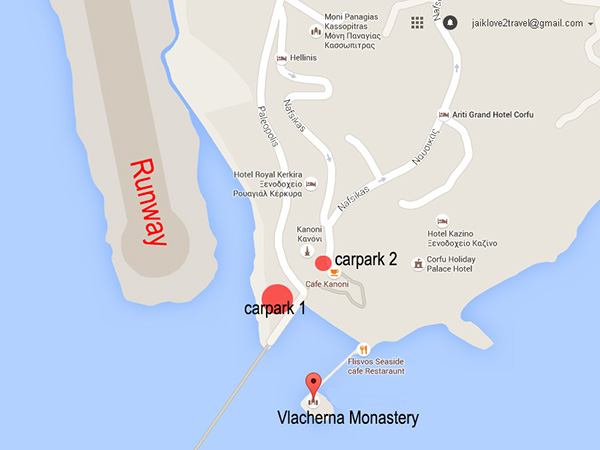 Instead of walking up the stairs we drove up to Cafe Kanoni. Up on the hill we had a top down view of the monastery and another island just behind the monastery.

We were back to the old town in the morning. The historical centre of Corfu Town was built between the Old Fortress and the New Fortress. 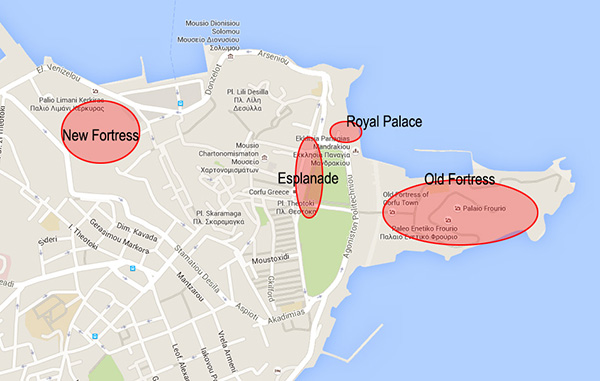 Map of the Old town of Corfu

In the past there were large walls linking the two fortresses providing protection to the inhabitants living within the walls, these walls were destroyed leaving behind only two huge gates.

We stopped by the Royal Palace and it looked as magnificent as it had looked at night but in a different way. The palace looked fantastic with the brilliant blue sky as the backdrop. Unlike its look in the night when everything took a different shades of gold, the daylight brought out all the different colours there were green, white, red, blue, black orange, brown etc. 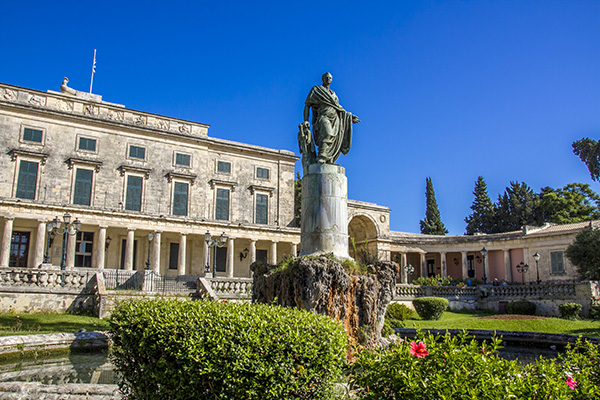 Walking on the esplanade we reached St Spyridonas Church which I felt looked better at night with its red dome and clock face lighted up. Just a couple of steps down the same cobbled path we arrived at Liston. It was still early in the day so the place was rather empty and quiet.

Strolling down the wide path I felt very relax and carefree. The moods in the air was very different from the moods I felt when we were here last evening. In the evening Liston was lighted up like a christmas tree and with the crowd packing the place, the moods were vibrant and festive. 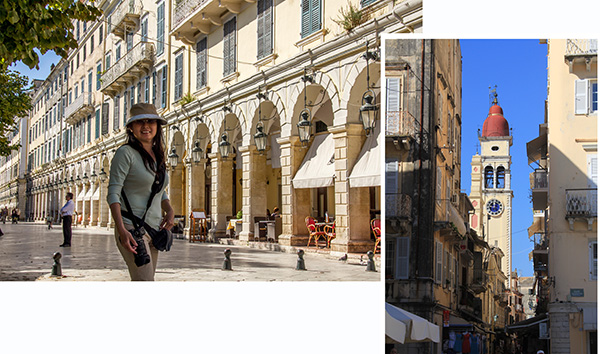 The old town was a labyrinth of cobble streets and alleys. There were shops everywhere. Each shop was a small individual unit selling its own products having its own characters. It was very fun to walk from one shop to the next because I never knew what to see next. This was a good place to get some souvenirs. We saw some interesting sling fabric bags and the shop owner gave us some discount when we bought three bags.

Alleys in the Old Town

Fantastic View up from the New Fortress

We traced the same path that we had walked last evening going up to the New Fortress. When we reached the huge black gate at the entrance that led into the fortress ground we were very relief when we saw it was unlocked. We were worried that it would be locked like last night if the cafe had yet to start operation. The fortress compound was very big and had several levels.

We reached the level where the cafe stood. It had several lounges and sofa placed at an open space just beside a tall four storey building. Walking around the open compound we could not find a good place to view the city unless we wanted to patronise the cafe and go up to the deck that it had installed.

We walked back to the building and saw a signboard hanged beside one of the many doorways, it said “To the Top”. 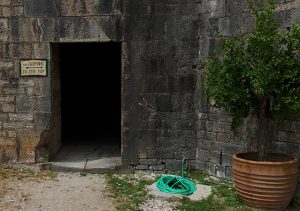 Doorway to the top

We entered the building, it was pretty clean and well lighted internally. We walked up a level, there were several doorless rooms and some had window openings. The view from these openings was pretty restricted so we ventured to the upper levels going up some pretty scary stairs with no side walls.

The highest level was an open space surrounded by battlement. At one corner we saw a ramp and standing on the ramp we looked over the battlement and saw the beautiful Corfu old town. 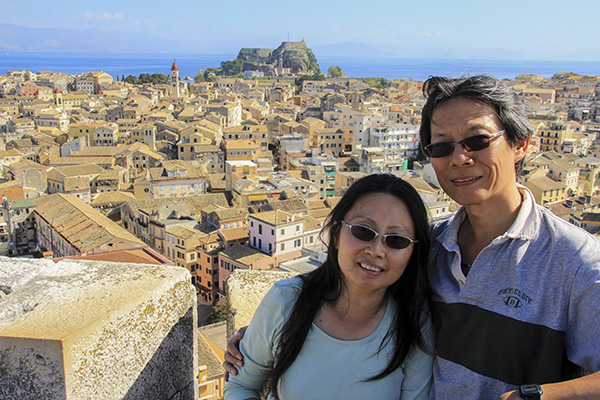 Corfu town viewed from the top of the New Fortress

The view was awesome. The endless blue sky, the old fortress on a grey rock hill, the white houses with their orangey brown roof tiles that took up all the space from the New Fortress to the Old Fortress. It was a magnificent sight.

My only regret was not being able to be here last evening to view the night scenery of this town. It was a shame that we had to leave Corfu in the afternoon and could not come back up here this evening. 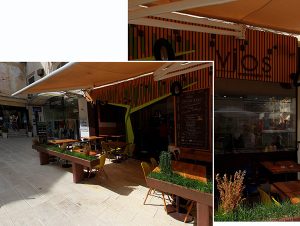 My friend, WM had many restrictions when come to food. So when we found a restaurant that met her requirements it would be very likely that we would be back at the same restaurant for more meals as long as we were in the vicinity.

So we were back at Vios, the same restaurant where we ate dinner last evening. This time we were here to pack lunch. I ordered pork belly sandwich as it was highly recommended by WM who ate it last evening. Well the sandwich was nice. 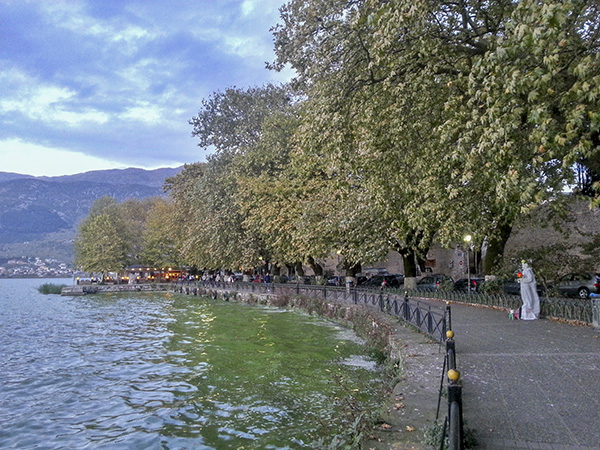 This is a huge lake, its perimeter is 33 km. There was a few towns around the lake and the city of Ioannina was also built at the bank of the lake. We drove past the city center and moved directly to the lake side promenade. Surprising the stretch of road beside the promenade was parked full of cars and it took us a while to find a parking space. We strolled along the promenade and watch the sun set over the horizon. 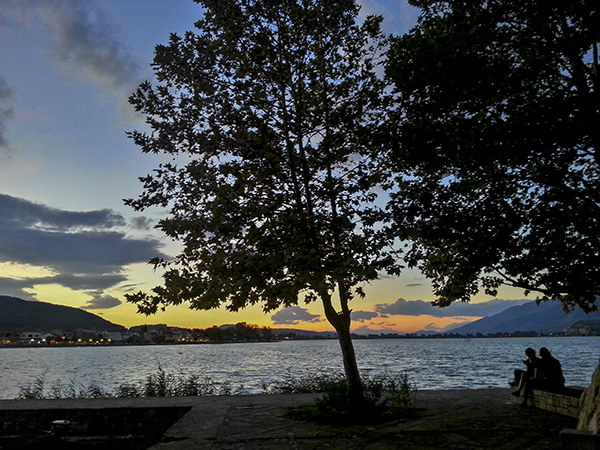 The sky turned amber before changing to dark blue to black. It was rather cooling and peaceful to sit on the benches by the lake and see the the lights of the houses from the town across the lake lighted up as the sky turned darker. 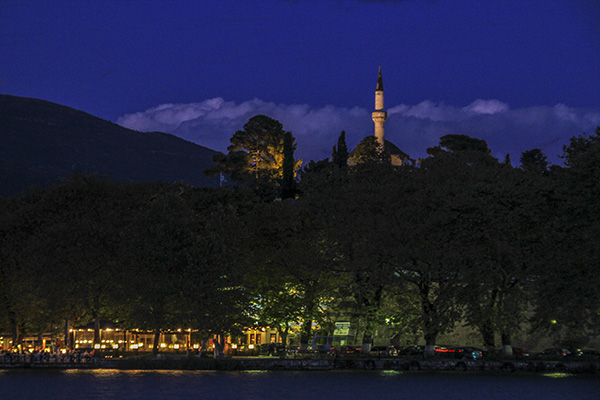 While relaxing at the promenade I took out my handphone to search for a suitable hotel near the lake for us to spend the night. I had not prebooked any hotel in Ioannina for this evening so as to give us some flexibility in the event that we could not reach Ioannina city by today. Though I had not booked our hotel, I had picked up a few good ones near the lake prior to leaving on this trip. Unfortunately as I looked at them again this evening they were all fully booked.

So I had to broaden my search to hotels that were further from the lake. We found one, Hotel Byzantio which had good reviews and reasonable price. I booked two rooms and received a confirmation for my reservation.

We walked along the promenade looking for a restaurant for our dinner. There were many restaurants, some were along the water edge and others were across the road that ran beside the promenade. Every restaurants glowed warmly under their dark golden lights and looked so inviting. 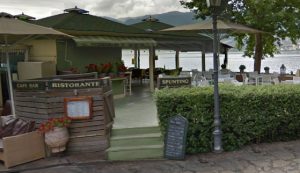 We walked into Spuntino Restaurant that was just by the lake near to the Ioannina castle. There were no other customers as it was already late. We looked at the menu and realised that we were in Italian restaurant. It was too late to walk out as the staff had already brought us water and bread. I would preferred a Greek restaurant as Greek food would be at its best in Greece and Italian food in Italy.My husband and I shared a Rivioli and a salad. After dinner we walked back to our car, we were not in any rush to get to the hotel, so we strolled leisurely along the promenade. A short distance from Spuntino Restaurant there was a T-junction and we took the road that went inland as there were a couple of souvenir shops that looked interesting. We came to a shop, Κολιονάσιος (Kolionasios) specialising in Greek desserts and sweet pastries. 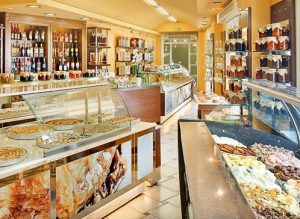 The lady in the store were super nice she kept giving out dessert samples for us to taste. She knew that we were tourists and would not be familiar with Greek pastries so she dished out various samples to help us made up our mind which to buy.

My husband and I found the pastries too sweet for our liking so we did not buy any. My two friends liked the baklava and several other syrupy pastries so they bought some for instant eating and some to bring back home to Singapore.

Hotel Byzantio was only 3 km from the lake, and it took us not more than 10 minutes to reach it. When we reached the hotel our impression was it looked good, clean and modern. 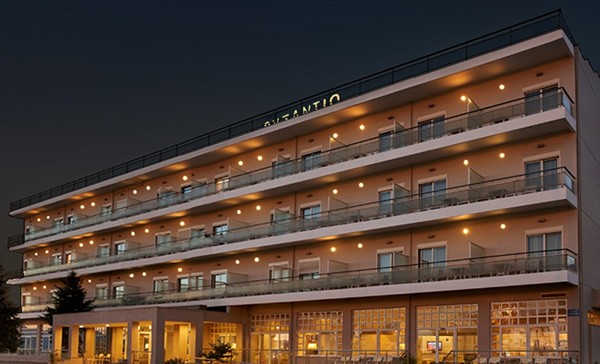 Unfortunately all the good feeling fled as this hotel was a disappointment. When we checked in the receptionist told us that we had booked the last two rooms. Unfortunately one was a partially renovated room, it had an old bathroom that was not renovated yet.

The hotel was undergoing renovation for all their rooms and some rooms were still not completely done yet. To make up for the old bathroom the staff said that the hotel would give us 20% off the hotel room prices.

It was late already 10pm and it was very inconvenient to search for another hotel, so we were forced by circumstance to accept the rooms. My husband and I took the room with the old bathroom. Though the room was OK, the bathroom was indeed old and full of stains and badly needed a makeover.

The cost of our rooms was €46 per room before discount. I strongly felt the hotel should not put up their partially renovated room for sales, I felt so uncomfortable using the old bathroom and hated my stay at the hotel. If I had a choice I would not accept the room even if it was free!!!