We planned to drive up to Meteora again in the early morning to see sunrise over Meteora. We had until noon to explore Meteora before we had to leave the place.

Our target for the day was to reach Lamia where we would spend the night. Between Meteora to Lamia we would pass two cities, Trikala and Karditsa. At Karditsa we would detour to Lake Plastira for some sightseeing. 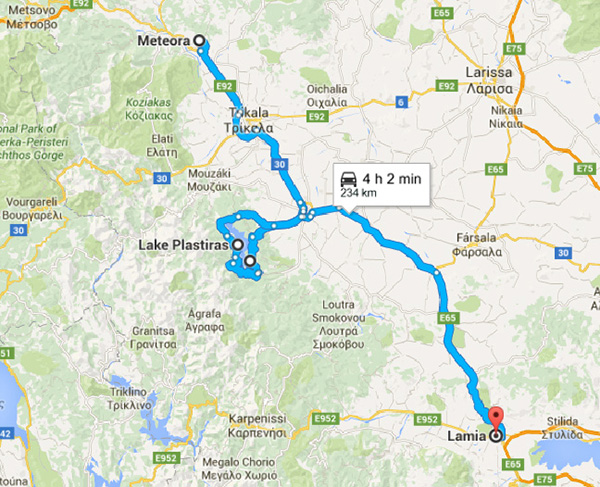 Sunrise view of Meteora was not as beautiful as sunset view and it could be that we picked the wrong place to view the sunrise. This morning we went back to same rocky outcrop where we stood last evening when viewing the sunset. We assumed that the outcrop would be the best location as we could see four of the six monasteries standing on that rock.

Standing on the outcrop looking west

On the outcrop the sunset view was directly in front of us. So west was in front which meant east was behind. Facing east was not an option because on the east side was a huge high rocky hill towering over us with no view at all. We had to face west to wait for the sun to rise.

As the sun rose above the rocky hill behind us its rays started to sweep lower into the valley in front of us. Gradually the monasteries that were on higher peaks turned golden as they were hit by the sun rays before those monasteries on lower peaks. 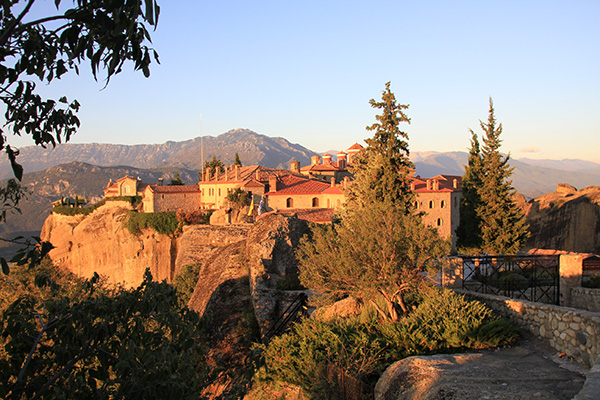 I was glad we made the effort to wake up early to see the sunrise over Meteora. Picking Kastraki to stay a night was also a good decision as we get to see Meteora from afternoon to sunset to surise to afternoon again. My only regret was we only had the time to explore the internal of one monastery, Varlaam. If I could stay two more days I would love to visit the internal of the Great Meteoran and Holy Trinity. 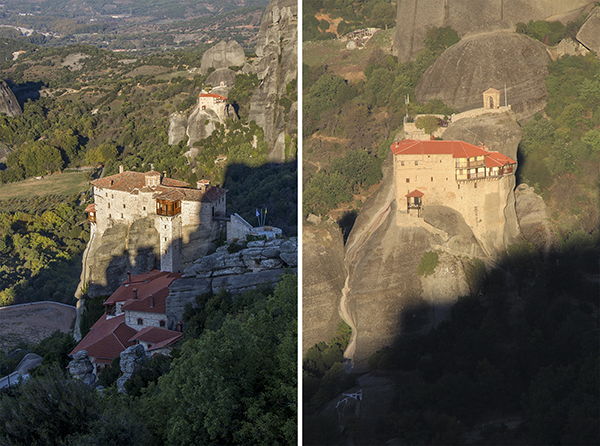 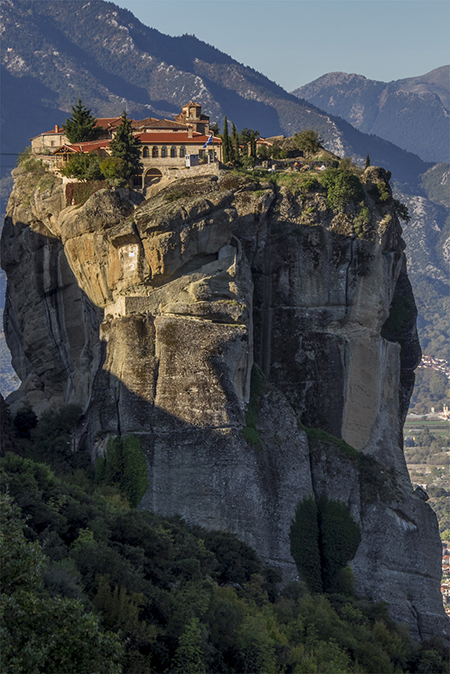 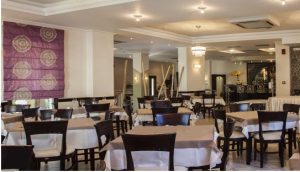 After viewing the sunrise of Meteora we went back to Hotel Meteoritis for our breakfast. Breakfast was part of the room packages. The breakfast was simple. There were bread, butter, cheese ham, eggs, milk, coffee etc, basically a standard breakfast nothing exciting.

As I ate, I could not help wonder the difference in the breakfasts served at Hotel Meteoritis and Guesthouse Plakias which had such great online reviews of its food.

Sigh…. Guesthouse Plakias was our original intended accommodation. On the other hand compared to Guesthouse Plakias, Hotel Meteoritis was so brand new, clean and comfortable. A pity that we could not have everything.

By the time we checked out of our hotel it was closed to 11 am. I was reluctant to leave Meteora and moved on. I had waited for a long time to visit this place and it was over in just 24 hours now that I was here. Greece was on the opposite side of the world for us and it would be highly unlikely that we would ever come back again.

We drove over to Kalabaka to check if we had missed anything. Kalabaka was a much larger town than Kastraki with more shops, hotels and restaurants. From Kalabaka we drove up to Meteora taking a different road from the one that connected Kastraki to Meteora. There was nothing we had missed.

Before we left Meteora we took a couple of pictures of the cave dwellings high up on the rock. These caves were the beginning of the monasteries of Meteora. They were once occupied by hermit monks who sought to be far away from society. In their continuous quests to be separated from the rest of the world and to be nearer to god, they moved from the caves to the peaks of the rocks and painstaking created the ‘floating” monasteries of Meteora that we saw today. 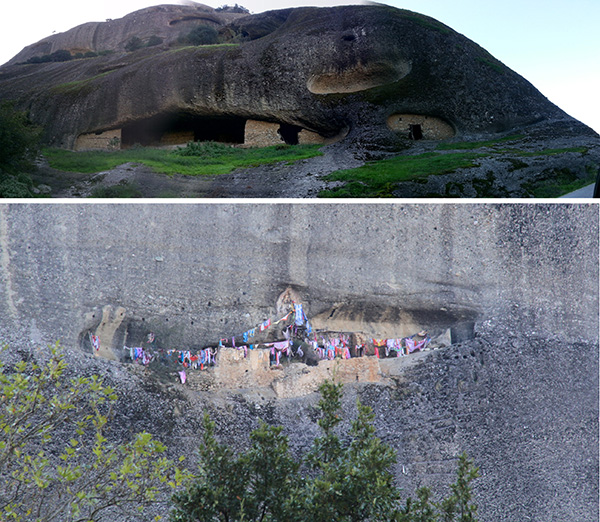 Lake Plastira was added into our itinerary as a “filler”. Our next major sightseeing destination after Meteora was Delphi Archaeological Site. To drive directly from Meteora to Delphi would be too exhausting as the journey would take 3.5 hours. By the time we reached Delphi it would be too late to visit the archaeological site as it would be too near its closing time.So rather than to reach Delphi on this day we planned to stop at Lamia, a big town, for a night and to drive into Delphi the next morning. Lamia and Delphi would be about an hour drive apart. From my research there no interesting attractions in Lamia so we decided to detour to Lake Plastira for some sightseeing to delay our arrival at Lamia. 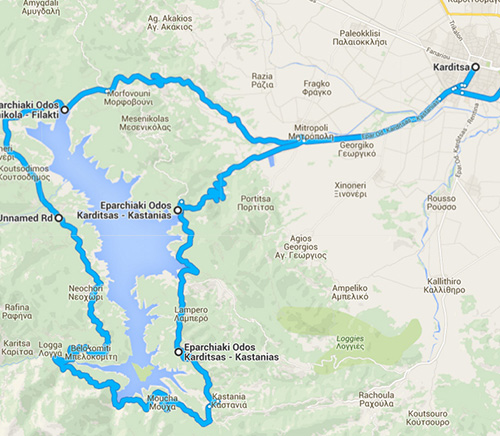 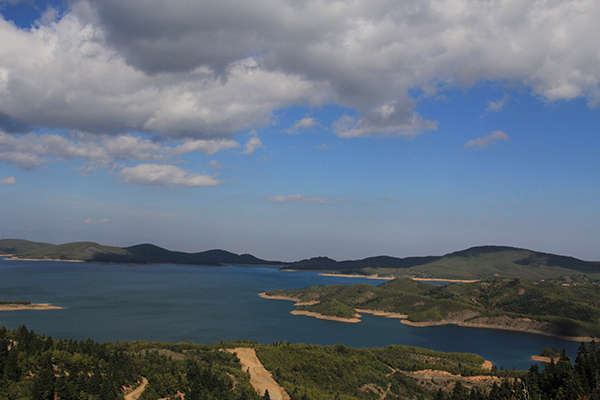 We drove to the northern tip of the lake to start our journey round around the lake. The perimeter of the lake was full of bends and curves and only at times the road took us next to the water. At the southern tips of the reservoir was a dam. 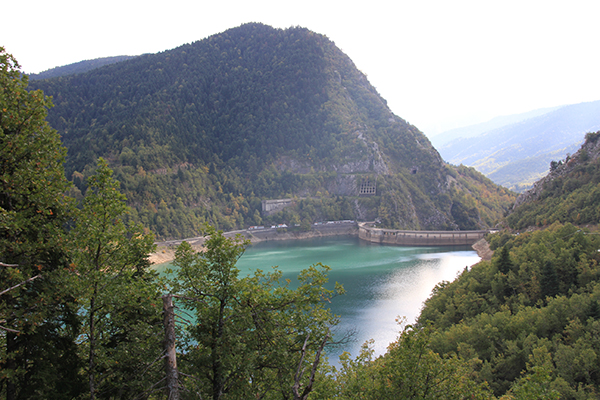 The lake water was very bluish turquoise in color and the lake surrounding was very quiet peaceful. We met a horse, a family of pigs and a couple of locals fishing at the dam. The drive was pleasant, nothing exciting though.

We drove into Lamia city by about 5 pm and started looking for accommodation. Since it was not too late we took the time to inspect the rooms of the hotels that we had selected. We finally settled for Hotel Samaras. After we left our luggage in our rooms we walked to the town center for dinner. There were many restaurants and cafes at the town centre so dinner was pretty easy and convenient.

After dinner while walking on our way back to the hotel we passed a shop that was about 10 units from our hotel. It looked like a souvenir shop so we went in to have a look. I bought a little souvenir that symbolised Greece. It was a charm for warding off the evil eye (matiasma).

The Greek traditional belief of Evil Eye curse is an ancient superstition met in many cultures around the Mediterranean sea from the Ancient times.

The evil eye curse from one person who is envious of another can cause injury or even death. A person who is evil eyed (matiasmenos) suffered horrible headache, weakness and nausea without logical explanation. This belief has been unshakably deeply widespread among Greek people who are very religious and superstitious. Even Greek church has a special prayer made specially to those on whom curse falls.

A Greek blue eye charm (mataki) whether in the form of a ring, necklace, bracelet or display ornament is useful for ward against the evil eye.

The room rates was €45 per double room for one night inclusive of breakfast. The hotel was a bit old and the furnishing rather dated but it was the best of the three that we had checked. Since we were only going to stay for the night and leave immediately after breakfast the next morning I supposed we did not need a fancy hotel.