To fly from Singapore to Tokyo (Narita) in the early morning. To go by bus or subway from Narita International Airport to our Hotel in Narita City. To take part in the Narita Gion Festival for the rest of the day.

We met all our targets!!! 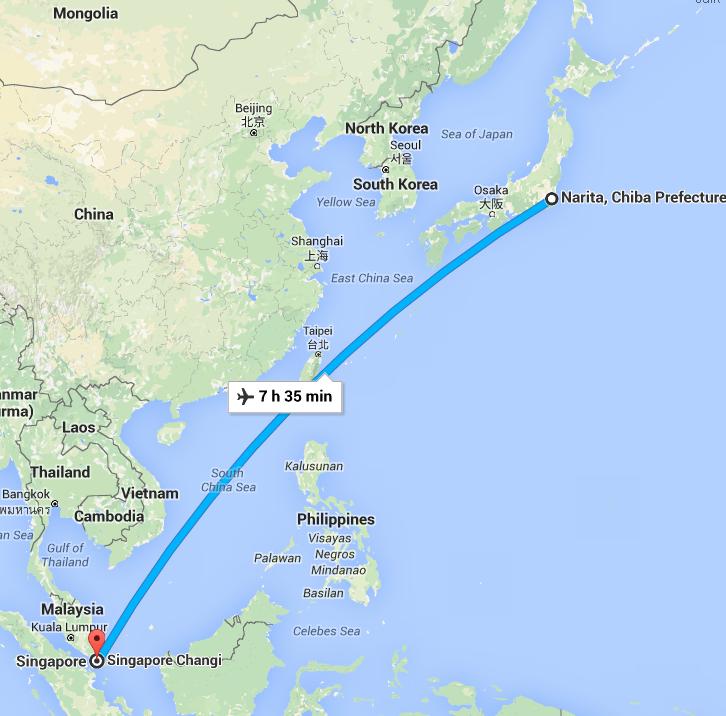 flight from Singapore to Narita

On way to Changi International Airport

We arrived at the airport at 5.00am, the sky was still dark and the MRT had not even started operating yet. Luckily, calling for a taxis was rather easy and we got to Changi International Airport Terminal 1 quickly. Since we had already completed our flight checkin online, it was just a matter of getting our boarding passes and handing over our luggage at the baggage drop counter. We cleared immigration and were off looking for a good breakfast place.

Airport Lounges played an important part in all our trips. And the best part was we did not have to pay for using them. We were able to use these lounges with our Priority Passes that were issued to us by Standard Chartered Bank. It was one of the benefits for being its customer. These lounges offered comfortable places to wait before boarding the plane. I would usually sip a cup of nice expresso, nibble on some finger food and surf the internet. At times, I would come across a lounge that served good meals too. All these were done as I relaxed in big sofa seat and waited for the final call to board the plane. These lounges had made my waiting time in the airport, whether for first boarding or during transit, a more pleasant experience and prepared me for the hard time ahead (coped up for hours in a plane!!!).

Unfortunately one of the disadvantages of an early flight was that most of the airport lounges were not open at that hour. In terminal 1, there were four lounges (that accept Priority Pass) that operated 24 hours, they were:

The first lounge we saw as we walked toward the direction of our boarding gate was Airport Wellness Oasis. It was small and deserted. I took a quick look at its food counter and was rather disappointed with its spread of “breakfast” food, there were just a few snack items placed on the counter. At one corner of the room was a small pond which was a foot spa. We decided to skip to the next lounge.

Beside Airport Wellness Oasis was a escalator which brought us directly to The Skyview Lounge. It looked bigger and brighter. The food spread on the counter looked slightly better than that of Airport Wellness Oasis. I ate fried noodle and chicken siew mai, unfortunately they tasted plain and a bit too salty. Luckily, its century egg porridge tasted fine. The only thing I really enjoyed was its Cafe latte, a good hot cup of aromatic coffee did wonder for my sleepy mind. I always appreciate freshly grounded coffee with sinful full cream milk.

Delta flew directly from Singapore to Tokyo Narita. It was my first time flying Delta and I was pleasantly surprised with its larger chair space, there was more width and legroom. For a short while I was so happy when the pilot broadcast about Delta’s on-board wifi, unfortunately it was not free in fact it was rather costly. So I got stuck with its on board entertainment (dramas and movies) which was rather limited and outdated. My five hours journey to Narita Airport was quite a hardship. 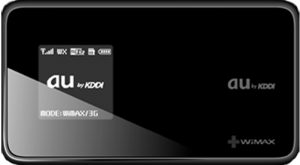 We reached Narita Airport Terminal 1 at about 2pm and went up to the 4th level to the post office to pick up the mobile router that I had rented online from Japan Wireless about a month ago. The post office operated from 8am to 10pm, 356 days a year.I have reserved and paid for a wireless mobile router from Japan Wireless,my favourite telco, because I find its charges comparatively cheaper than the others. Two days before I left Singapore, Japan Wireless had informed me that they had dispatched the router to the Post office.

At the post office I just needed to give the post office staff my name and picked up the package easily. In another 5 minutes we completed the setup of all our mobile devices to connect to the mobile router! With data access I would be able to navigate my way to our hotel in Narita city smoothly.

I could also arrange for the mobile router to be sent to my hotel but I preferred to pick it up at the airport so that I could use it immediately.

The train station was directly in the basement of Narita airport and we had no problem finding it as there were many directional sign in English. At the basement, things got a bit complicated as there were several entrances leading to different trains. We zoomed in to a huge overhead map showing a complex network of the train routes.

Unfortunately the Station names in English were in small prints and for a while we could not find our destination station or our present station. Luckily I was knew the Chinese name of the two stations so I finally located the two stations by their Chinese names which were in huge prints on the map. We bought our tickets at ¥260 per person at the ticketing machine which was easy to use as it had an English option for selection. We dragged our luggage to the correct entrance and boarded a train for a short journey of just three train stops. 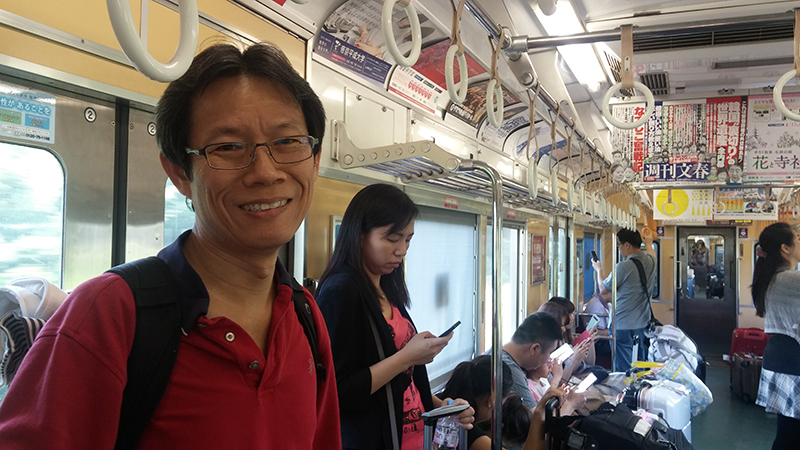 Getting to Our Hotel

We got off the train at KeiseiNarita Station. The train platform was an above ground high platform which gave me a good view of the buildings around it. I got out my handphone and activated google map. With the map we were able to establish our orientation and walked toward the direction of our hotel, which was about 600 metres away. From KeiseiNarita Station we had to cross over to Narita Station before we could see our Hotel.

The Narita Gion Festival is a summer festival, which has continued for over 300 years. At this event, one of Naritasan Shinshoji’s portable shrines (omikoshi), along with 10 other different floats are paraded down the Omotesando Road. It lasts for three days and during these three days traditional competitions and musical performances are held. An estimated 400,000 spectators are expected to throng along the festival route.

I knew that the festival parade route would be along a road of about 1 km, starting from Narita Station to Naritasan Shinshoji Temple. So I booked a hotel nearest to this route. Once we left our luggage in our room we set out on foot walking along the festival parade route towards the Temple. Along the way we could already see signs of the festival, we saw little girls dressed up in Kimonos and groups of people walking in the same direction towards the temple. 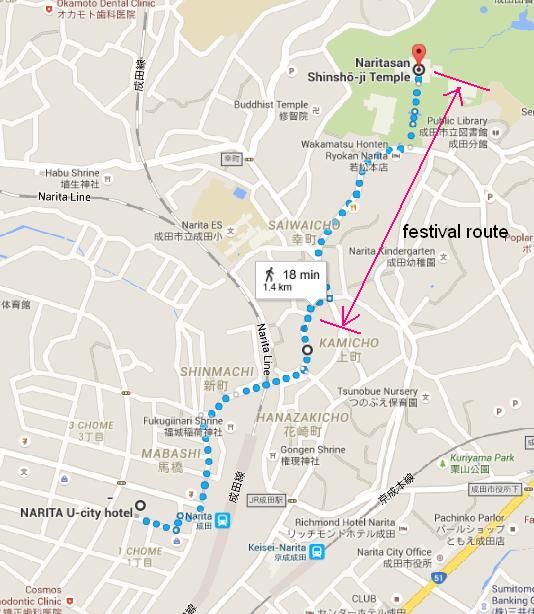 Once we turned into Omotesando Road we saw a police road block, stopping vehicles from going into the road. Instantly we knew we had reached the right location. The entire place was in a festive celebration mood. It was crowded with people and the shops on both sides of the road were bustling with customers. At interval along the road, makeshift stalls were clustered together to sell Japanese street food to passers-by. 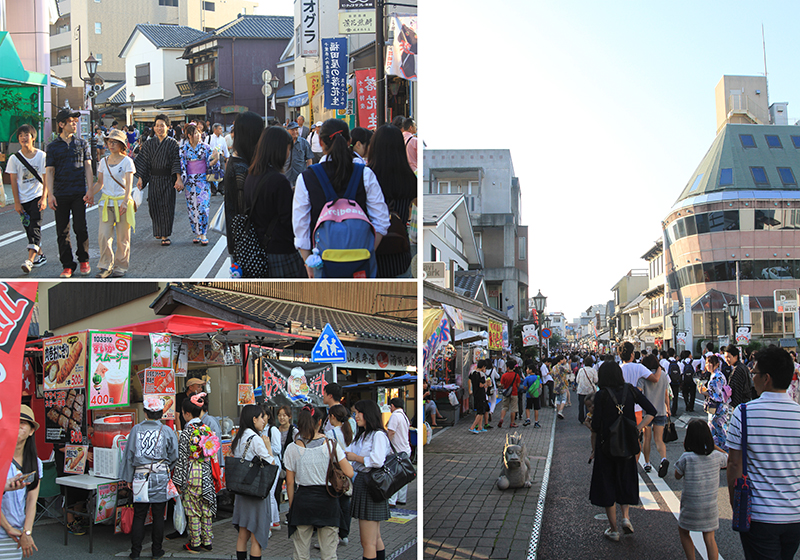 Soon we saw our first float of the day, it was huge and heavy, it was two levels high. The wooden float was beautifully decorated, it carried several musicians on it first deck and several men on the roof of its second deck. The heavy float was dragged by thick ropes pulled by two long lines of participants from the front. 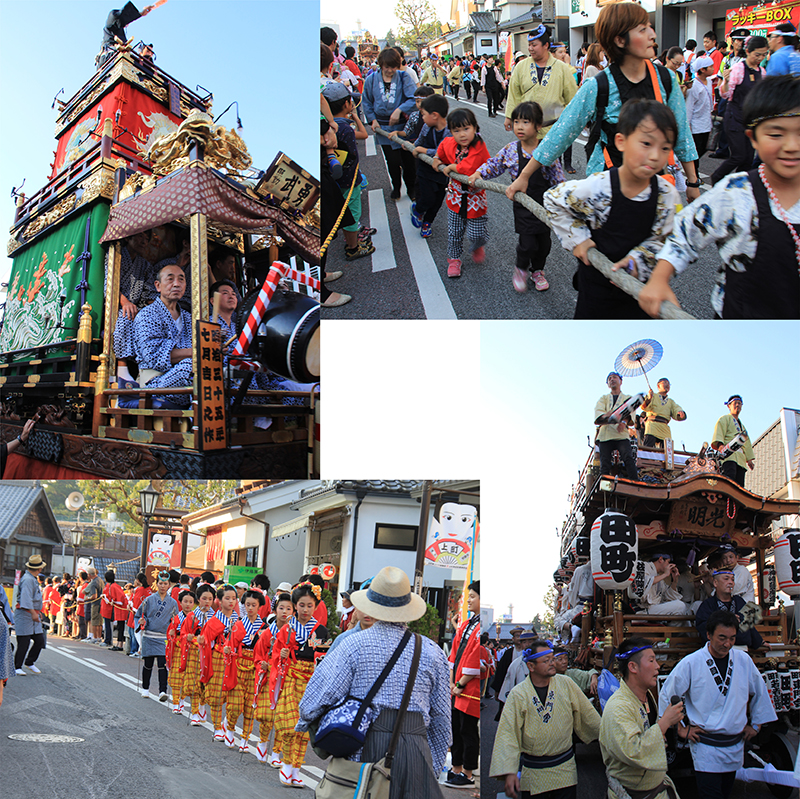 In rhythmic chorus of shouts the participants pulled the float slowly through the narrow road. As they moved along, they were cheered by spectators that packed both the shoulders of the narrow road. It was amazing to see the level of participation from all age groups. Those that were too young to walk were carried by their mothers who walked in their places. I could see that from an early age these youngsters were already exposed to this traditional culture which became a natural part of their lives when they grow up. 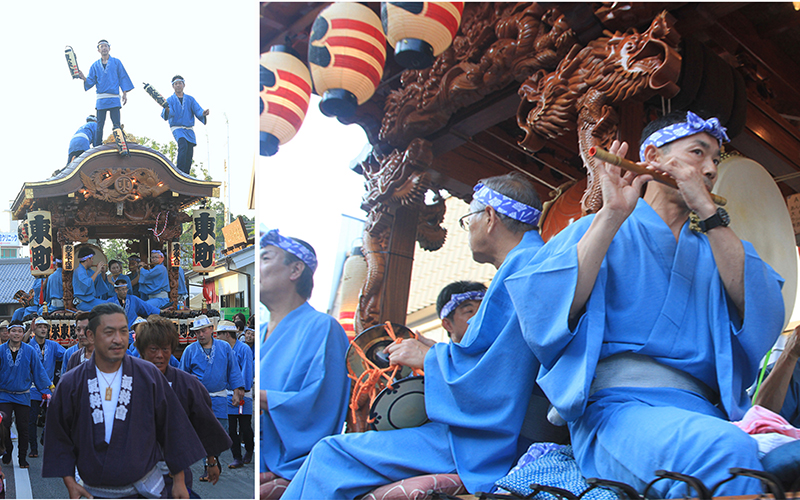 One float after another went by, each float had its own theme and all its participants wore similar costumes. The noise all round was loud, was chaotic and yet rhythmic. Loud because there were people everywhere, spectators and particapants. Chaotic because the spectators were all laughing, shouting and singing at the same time. Rhythmic because the float participants were shouting and cheering in synchronisation to the the traditional music played by the male and female participants sitting on the first deck of the float. 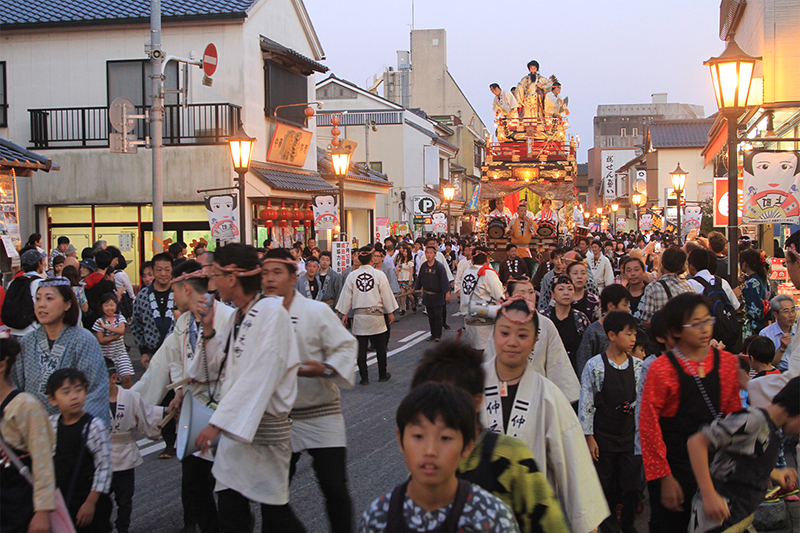 The whole procession went on and on, the participants seemed tirelss, they pulled the floats through the streets from day to night in a route that loop through the temple. As the evening approached, and the sky began to dim, lanterns on the floats were lighted up. I could already imagine how these floats would looked like when the sky turned dark. 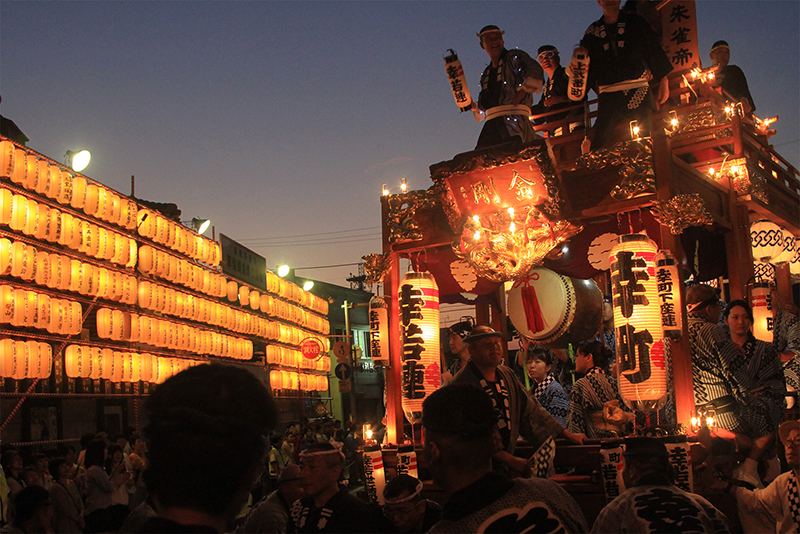 The size of the crowd had grown several folds since the afternoon, though there were many people there was no rowdy behaviour. By 8pm, after the sky became totally black the procession took on a magical golden hue. 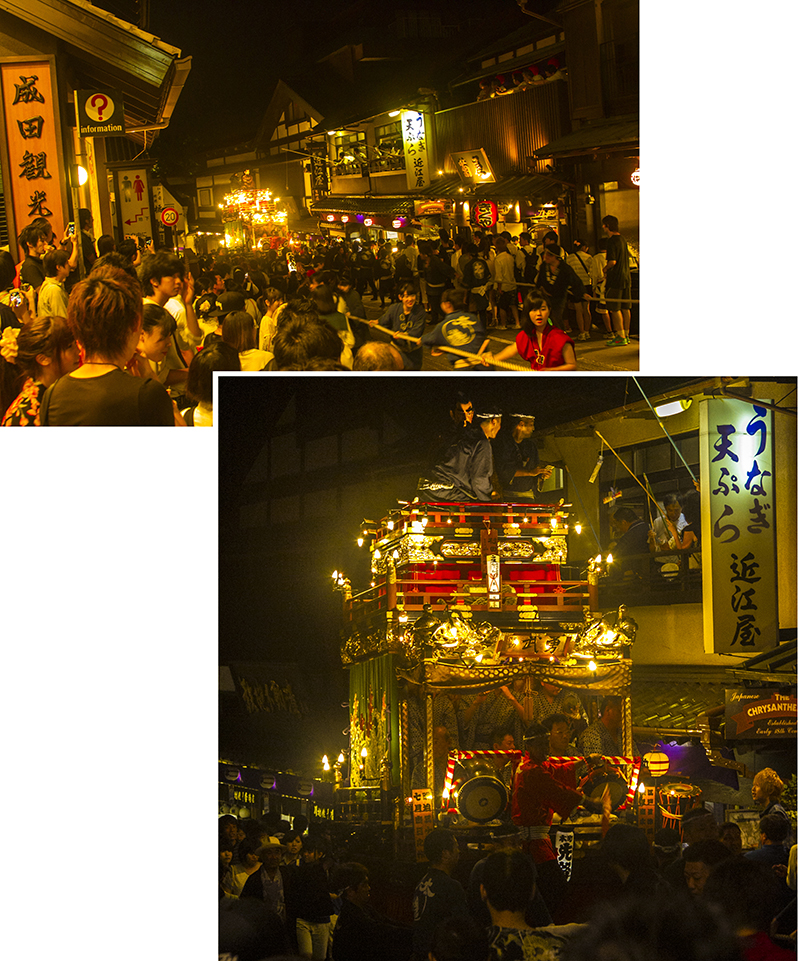 Festival Parade went on through the night

It was a long day for us, we had been awake since 4 am in the morning and were on our feet for hours and yet we felt very reluctant to leave the festival. The festive mood grew more infectious as the night deepened but by 9.30 pm we decided to call it a day and walked back to our hotel.As we reached our hotel, we were surprised and delighted to encounter a float parked just outside a quaint small beer store that was about 5 metres away from the front steps of our hotel. For a change, the float participants had put down the thick ropes and were performing a traditional Japanese dance on the narrow pavement. They were dancing to the tune of a live music played by the Japanese uncles and aunties sitting on the float. We thought we had left the festival behind but it came to us at our very door steps (hotel steps)!! 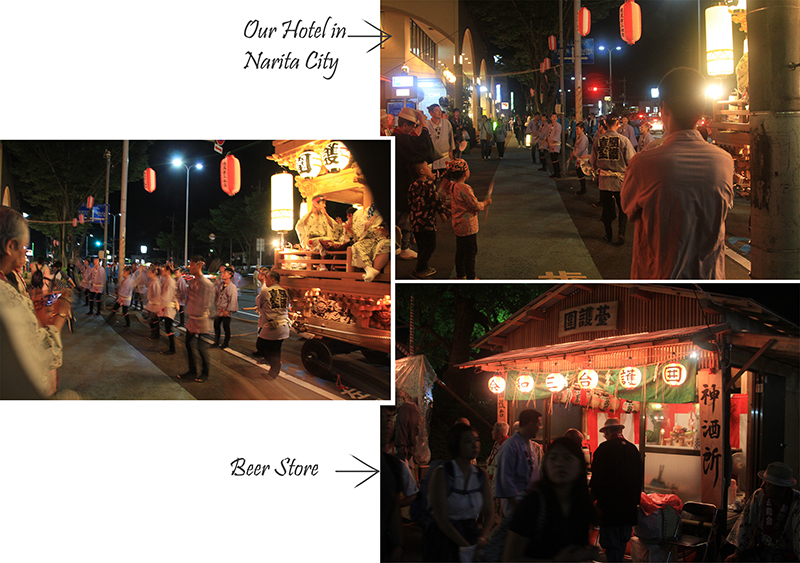 Float parked near the doorsteps of our hotel

Hotel for the Night 1and Night 2

I had purposely selected Narita U-City Hotel because it was within walking distance to the festival procession route that the Narita Gion Festival Floats would take. The proximity had allowed us to enjoy the festival late to the night without worrying about the journey back to the hotel.

I had booked a semi double room at $55 a night at this hotel about 3 months ago. I was willing to pay more for a larger room, unfortunately even at that time the larger rooms were already sold out. 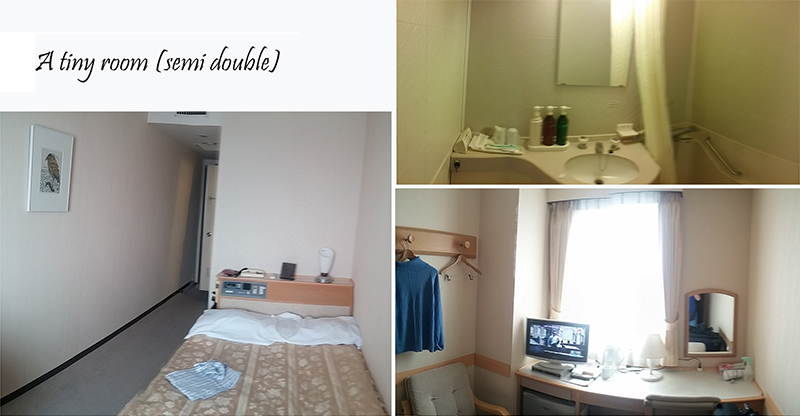 The semi double room was very tight, after placing our two 24-inch luggage bags and two backpacks there was hardly any space to move around. The attached bathroom was also very small, I could not avoid banging my elbows into the walls as I maneuvered around in the enclosed toilets.

The hotel furnishing was old and faded and the room had a slight moldy smell though it looked clean. There was only two power plugs which made it difficult for us to charge all our devices at the same time. The room came with towels, boiling kettle, hair dryer, TV, wifi, fridge. The hotel did not supply breakfast.

If it was not for its proximity to the Narita Gion Festival route and the Narita Train Station I would not want to stay at this hotel. 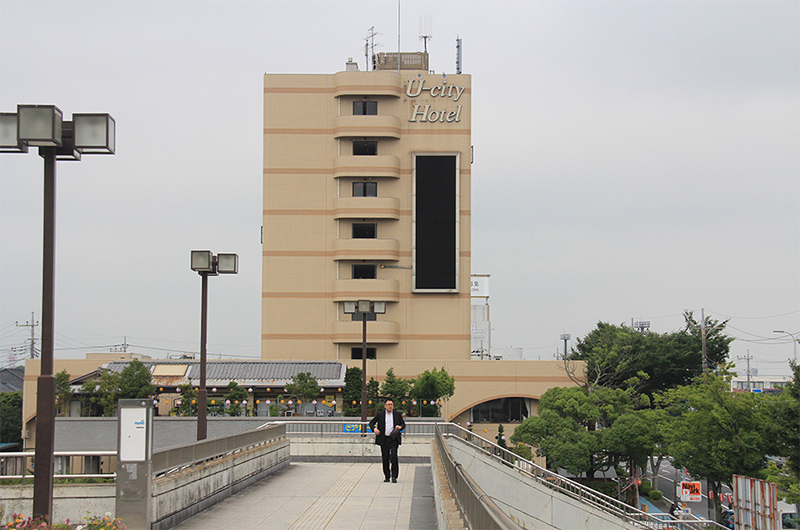