The plan was to sightsee Hakodate city. The places we intended to visit were mainly around the Bay areas these would include:

Since all these places were not too far away from our hotel, we intended to reach them on foot. 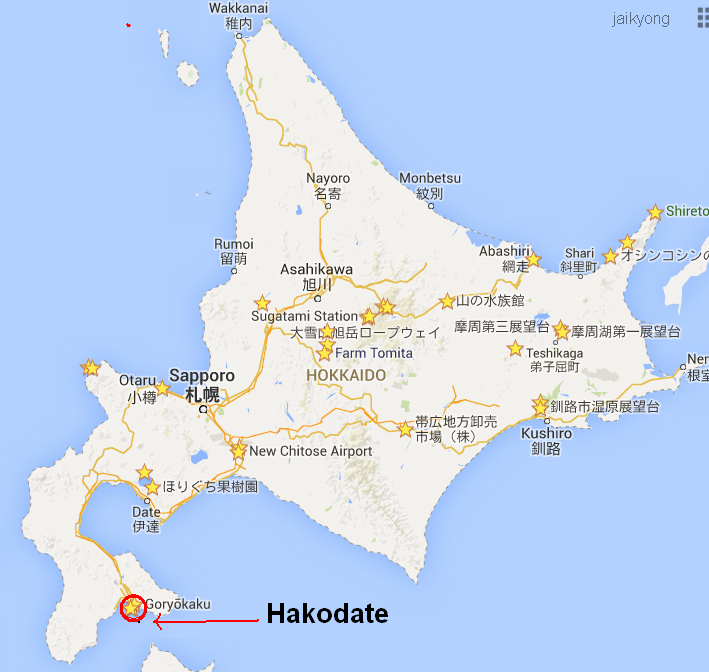 We achieved all our targets and more!!!

Breakfast at the Comfort hotel

Hakodate is located in the southwest of Hokkaido and facing the Tsugaru Strait. It was developed as a port town for trade with foreign countries at the end of the 19th century, and is a gateway connecting Hokkaido with Honshu by Seikan Tunnel.

Today Hakodate is the third largest city of Hokkaido.

We walked from our hotel to the morning market which was just 500 metres away. Since we had already eaten breakfast, our visit to the market would just be a sightseeing walk. There were all sorts of seafood on sale. Many of these seafood that were on display were still alive and wiggling. 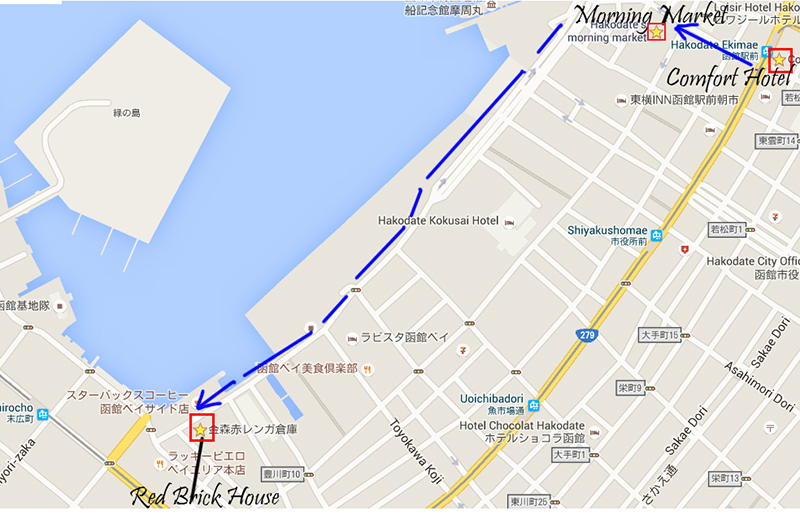 The Hakodate morning market is one the three largest markets in Japan, it has a cluster of 300 odd shops and eateries selling fresh seafood and vegetables under one roof. The market is open for business from as early as 5am (during summer) and closes at noon.

Back home I usually only buy fishes and not other types of seafood. So I could not tell if the prices of the seafoods at this morning market were reasonable. One red hairy crab costed ¥6300 ($70 sgd) which seemed expensive to us, but looking at other tourists eagerly buying them in bulk, I guessed the prices must be considered good.

From the market to the famous “Hakodate Bay Area” was only a kilometre, so we set out in that direction. Along the way we walked past the harbour where we saw many boats anchored there, including several fishing boats. Unlike the morning market, there was nobody in sight. I supposed all the loading and unloading activities were done before dawn. 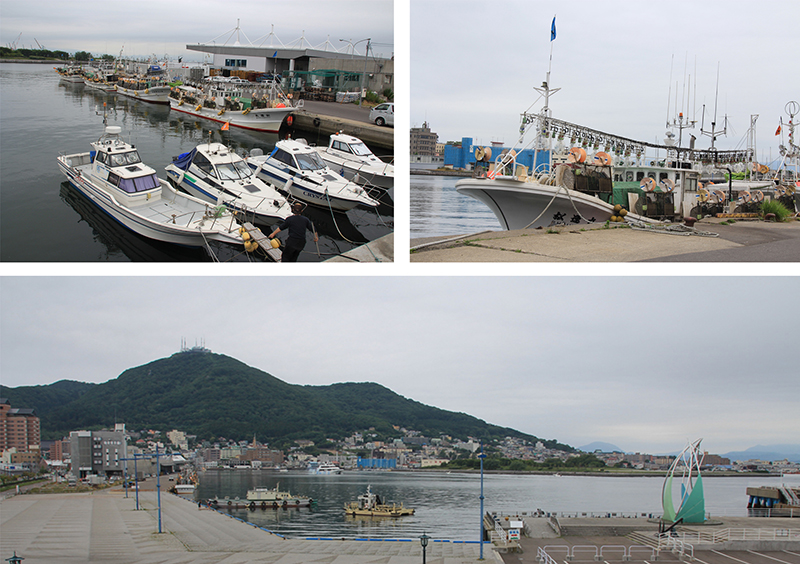 From the harbour we could see a structure with several towers on the top of the hill, we only realised that the structure was the upper Station of Hakodate ropeway when we spotted a gondola going up. So that was where we were last evening! 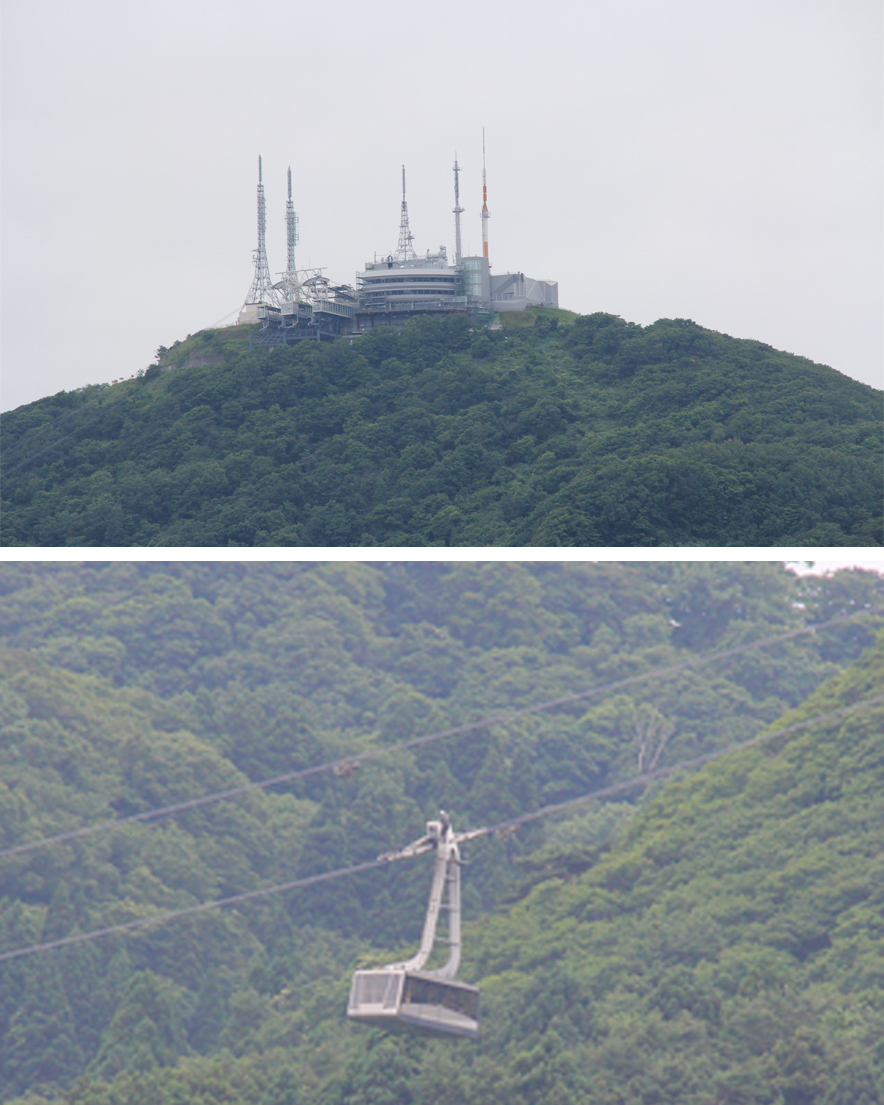 It started drizzling as we walked toward the Red Brick Warehouse. The sky was gloomy and cloudy the whole morning and we knew that it would certainly rain it was only a matter of when. When the rain got heavier we were forced to seek shelter in the first of the Red Brick house. 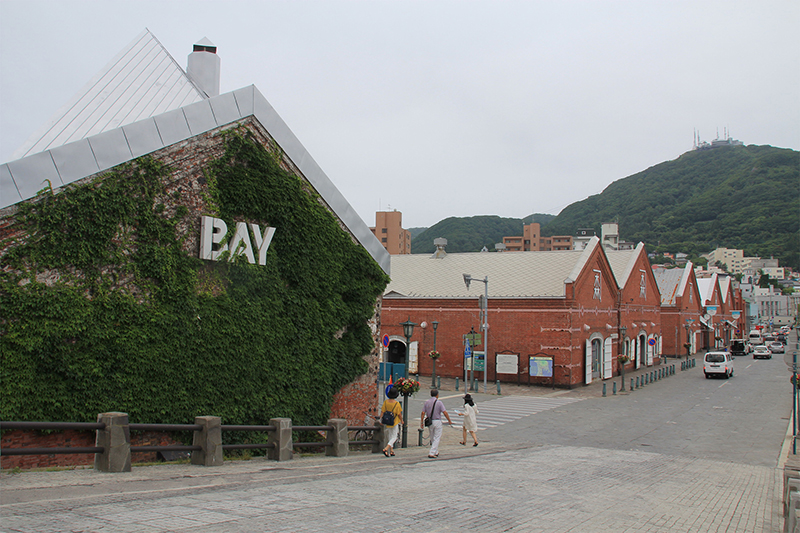 These red brick warehouses were built during the past trading days, toward the end of the edo period (1600 – 1876). Several of them survived and have recently been redeveloped into shops, souvenir stores, restaurants and cafes. 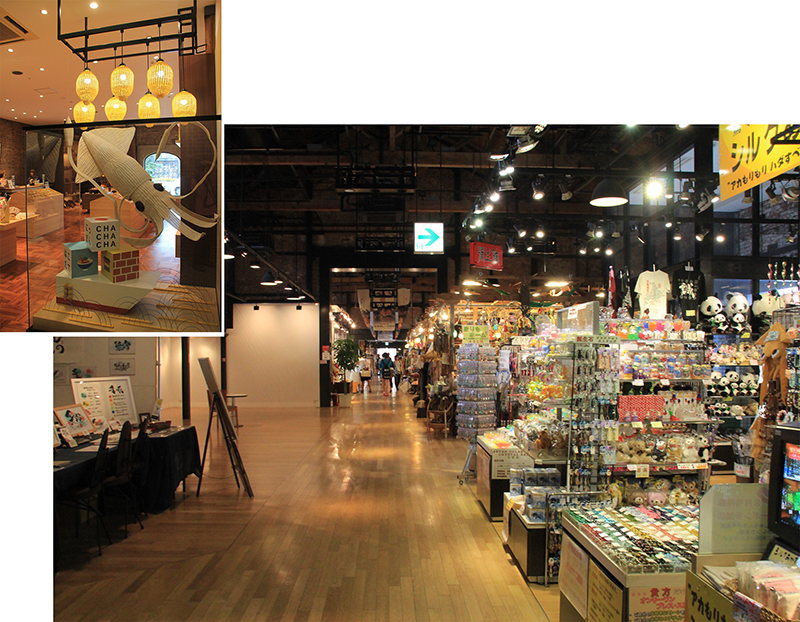 We walked through five brick houses looking through the products which were mainly non Japanese products. Usually I would not have the patience to go through so mainly souvenir stores but it was drizzling outside and staying in the brick houses was the only way to avoid getting wet. I had always found souvenir shopping a tough job. We were looking for gifts that not just represent Japan they must also hold value to those that would be receiving the gifts. Well, we managed to find a couple of souvenirs for our children.

Once we bought our souvenirs, I found walking aimlessly round and round the stores very tiring. So the instant the drizzle lightened up we dashed across the road to a Starbuck cafe for coffee and cakes. We were stuck at Starbuck for another hour before the drizzle finally stop. It was already 1pm and we continued our walk along the bay.

Though the rain had stopped the sky was still quite cloudy. The weather was nice and cool and very pleasant for walking. We walked for another one kilometre along the bay searching for the famous slopes of Motomachi. Unfortunately we did not find any slopes that resembled the photos that I had seen before. After a kilometre we decided to turn back as we believed we had missed the slopes along the way. 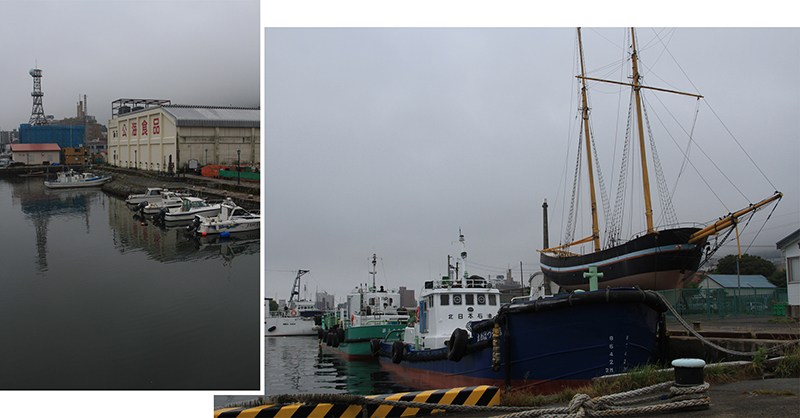 As we walked back the way we came from, I activated the GPS of my mobile phone so that I could pinpoint my location as we went in search of the famous slopes of Motomachi.

The slopes of Motomachi are the 19 streets at the base of Mt Hakodate that run straight to the bay. They slope down toward the bay area. They are very popular with tourists who like to strolls along these slopes as there are distinct buildings and landscapes along them. 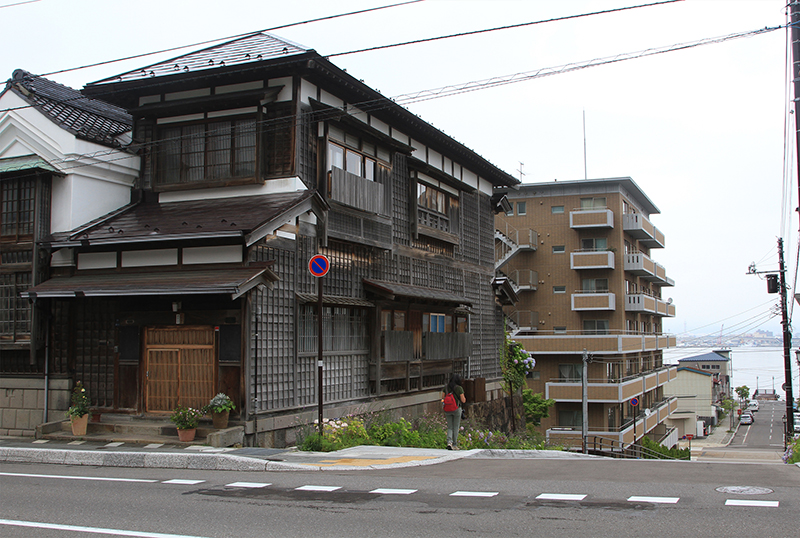 We found 8 slopes two of which we felt was worth visiting. One slope, Motoi-saka Dori had old European Styled houses and its road was cobbled at some parts. The cobbled road and the old building gave the place an European feel. Unfortunately when we looked down the slope which was supposed to end with a view of a blue bay, we saw an huge ugly half-completed building blocking that view. The other slope, Hiyori-zaka was less incline, less captivating but we could see the bay clearly from the upper end of the slope. 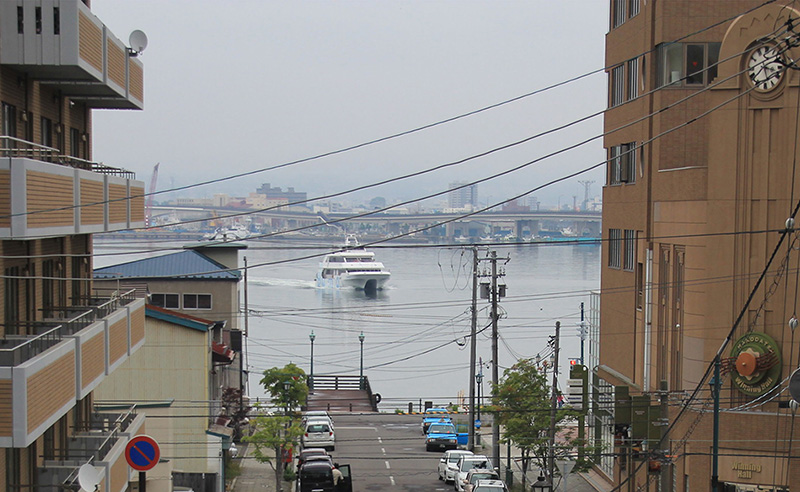 Arrival of a Catamaran

We were done with Motomachi slopes by 3pm and did not know where else to go in Hakodate city as we had already completed all the places in our itinerary. We decided to return to our hotel but this time instead of walking we took the city tram. We boarded the tram at Suehirocho Tram Station which was the tram station nearest to Motomachi slopes and alighted after four stops later at Hakodate Ekimae Station which was nearest to our hotel. The tram ride cost ¥260 per person and it saved us 1.7km of walking.

As it was still early and the weather was still holding up, we felt that it would be a waste of time to return to our room and do nothing. So we picked up our car and drove out of Hakodate to Lake Onuma. It was already in our plan to visit Lake Onuma the next day in the morning but since we had the time we thought we might as well take a look of Lake Onuma in the evening light and again in the morning light the next day.

We drove 33 km north of Hakodate and arrived at Lake Onuma some 40 minutes later. It was already close to 4.30 pm and the place was deserted, accept for the car park attendants who were still guarding the carpark entrances. The parking fee was  ¥500 per entry and since we did not think that we would be staying long we did not want to pay that high a price.

We drove around looking for free carpark but could not find any. In the end we drove to a carpark belonging to a restaurant and went into the restaurant for dinner. Unfortunately the meal prices were too expensive so we told the owner that we would like to eat beef which we knew that the restaurant was not serving. We thought that by saying that we could make a graceful escape. The restaurant owner instead of letting us off insisted that we walked with him across the road to his friend’s restaurant to eat BBQ beef!!! So we had BBQ (Hokkaido) beef for dinner. The dinner for just a few slices of beef and it cost us  ¥3000. Well we finally tasted Hokkaido Beef but sadly it was too tough for our liking.

After dinner, we went on to explore Lake Onuma. We took a short walk crossing two bridges to explore one of its islets. We could see that there were no street lamps on the islets so it would not be safe to wander far from the mainland. The place was very beautiful and very tranquil. The water was so still, it was almost mirror like and we could see the reflection of the bridges, boats, trees and houses very clearly in the water. 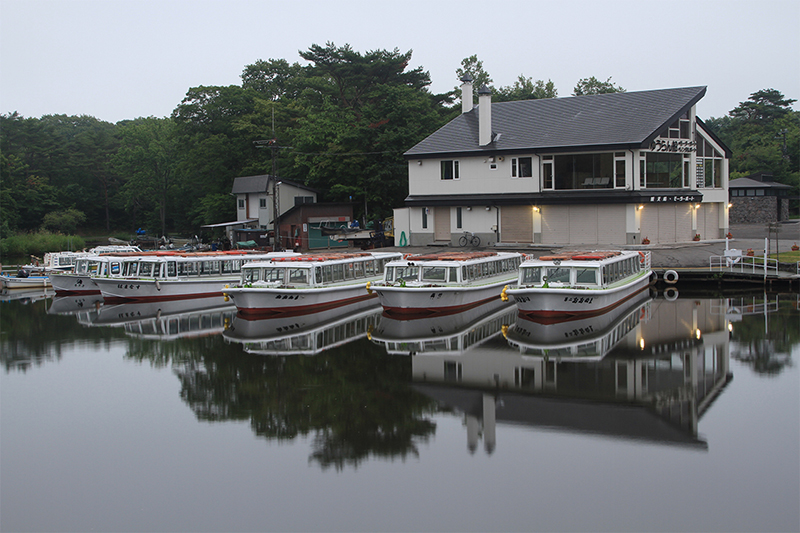 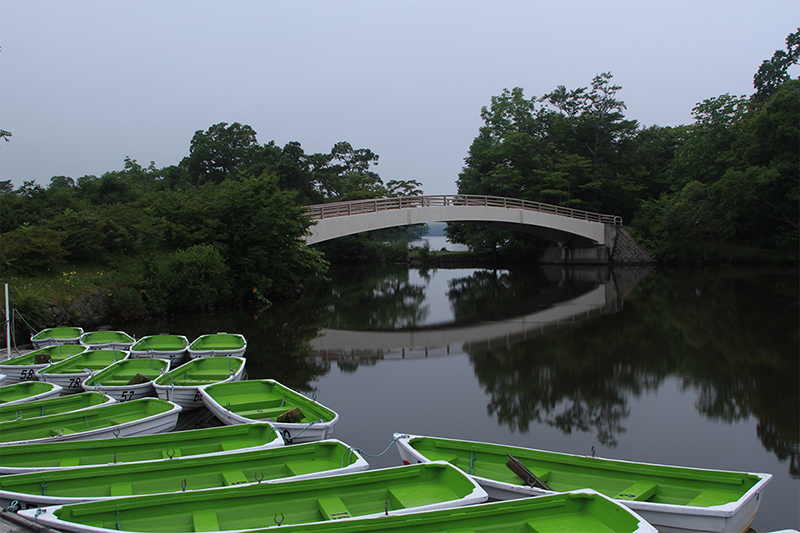 We left the park after the light became too dim for us to move around safely and returned to the first restaurant to pick up our car. In about 45 minutes later when we reached our hotel in Hakodate. My hubby spent the rest of the night taking photo of the street scene below our hotel. 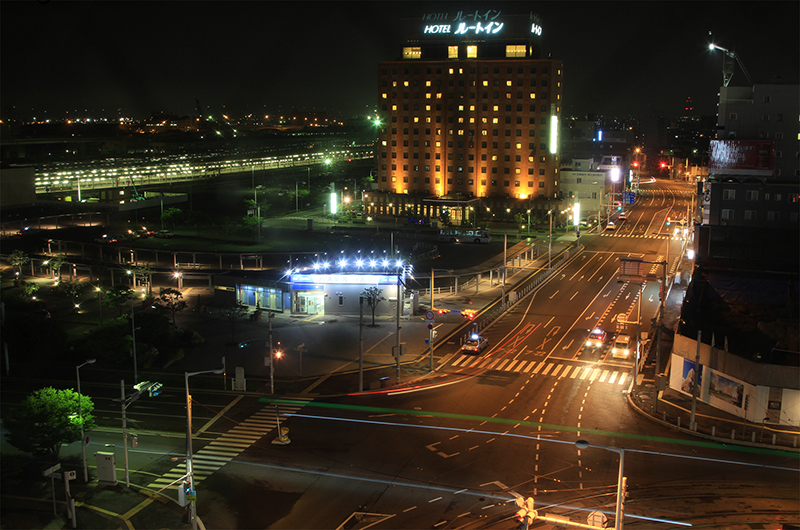 Night street as seen from our room