We planned to drive from Hakodate to Onuma Lake and then to Niseko. The total distance would be about 180 km. Our first stop would be Lake Onuma and the rest of the stops would be around Niseko area.

At Niseko we planned to: 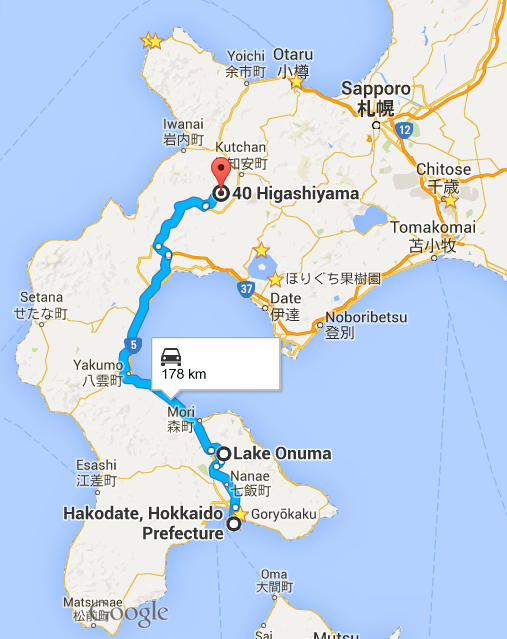 We achieved all our targets except for Mt Annupuri.

Today was the third morning I ate breakfast at a Comfort Hotel, once at Comfort Hotel Kushiro and twice at Comfort Hotel Hakodate. All three breakfasts were similar. At the booking website it was stated that breakfast was complimentary for customers, since it was free we did not set a high expectation. Surprising the breakfast was quite good. It was buffet style, with a spread of vege salad, potato salad, soups, cereals, rice, meat, eggs, coffee, other drinks etc.

I would describe the breakfast as ‘comfortable’, the food was simple yet tasty. It was not those types where every item looked so yummy that made you wanted to taste every dish and induced you to go back for more. I just picked up the items I like better, ate them leisurely with miso soup and coffee. It was a breakfast that set one’s tummy in the right mode, appropriate to sit a long car journey to the next destination.

We retraced the road that we had taken the day before and reached Onuma Quasi-national Park in about an hour. The distance was only 33 km which basically meant we were driving at about 50 km/hr, the standard speed limit in populated area.

Onuma Quasi-national Park is at the foot of Mount Komagatake (dormant volcano) and has several lakes – Lake Onuma, Lake Konuma, Lake Junsainuma and others. Lake Onuma is the largest lake in this Park and has a circumference of 24 Km and depth of 14 meters. 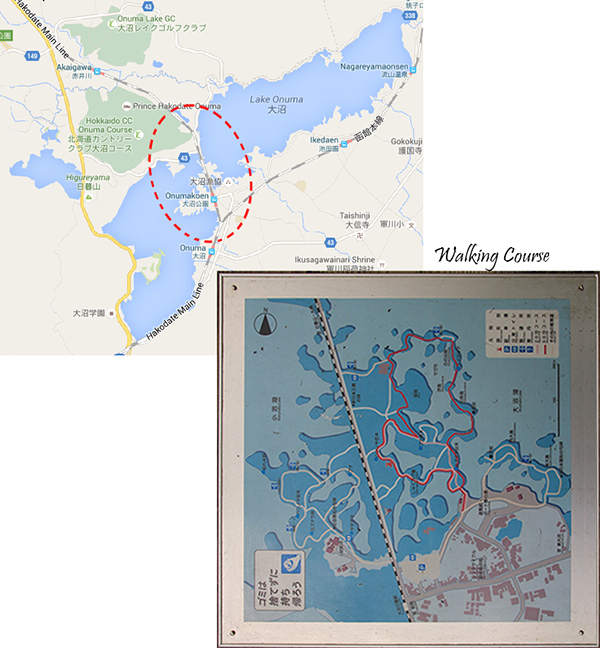 We spent nearly 3 hours exploring the many islets and crossing bridges, at least 8, stumbling upon unexpected ponds and watching speed boats passing by, etc. The walking trail was like a maze, sometimes the trail turned clockwise, sometimes anti clockwise, splitting into multiple paths and merging into another path. The only recognisable landmarks were the bridges. 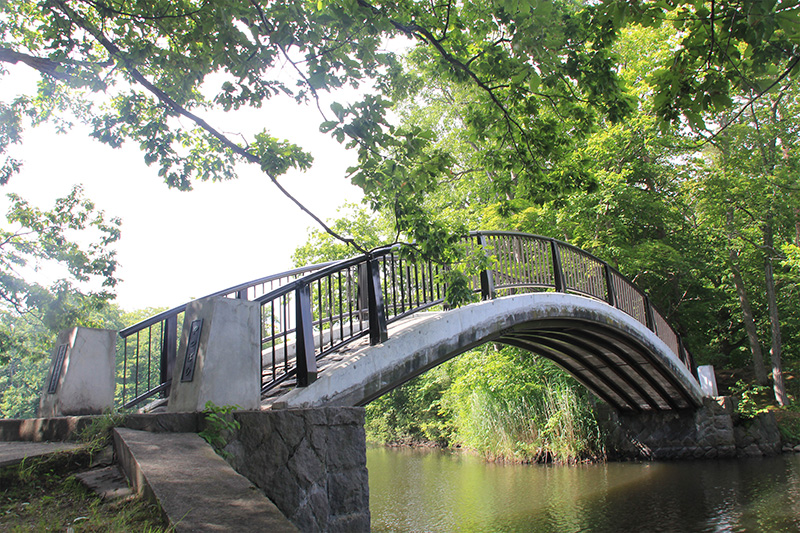 One of the many bridges at Lake Onuma

Each bridge looked different from the others some were half moon shape, some were flat, some were huge some were small, some were concrete, others were brick and some were made of wood. 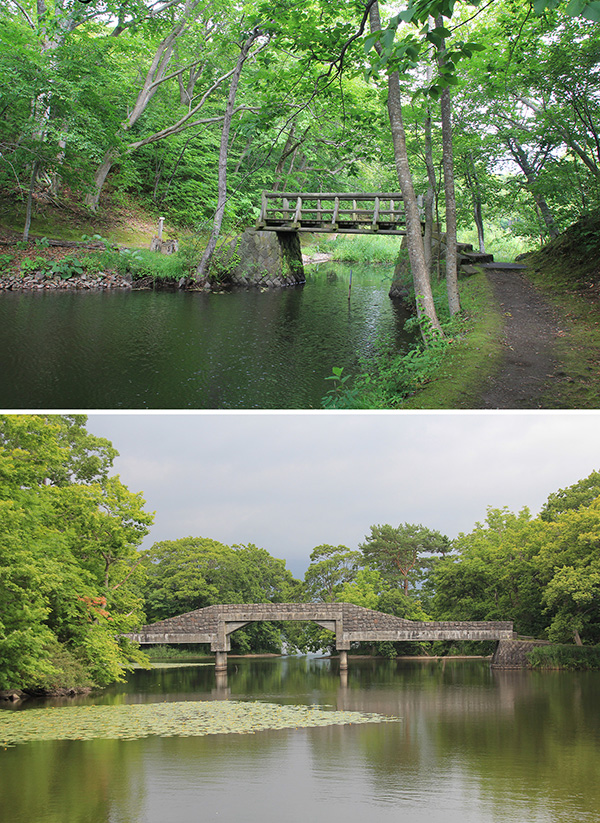 I found exploring on foot fun and intriguing. We never know what to see next when we walked round the corner of an islet. We came close to the ducks, birds and fishes that lived on the lake. And got ever closer to the countless water lilies that practically covered an entire pond. 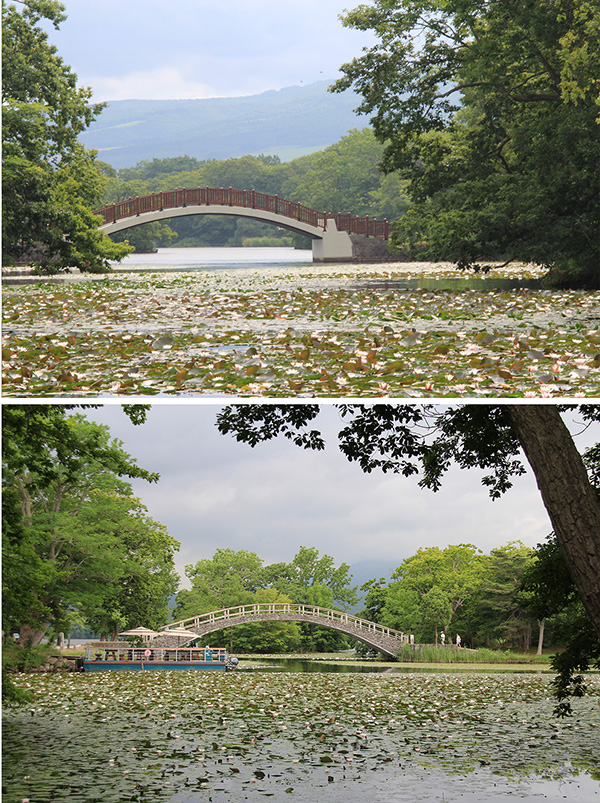 There were several boat operators in the park. They provided boating services to those who prefer to explore the park on water. There were canoes, ferries and speed boats. 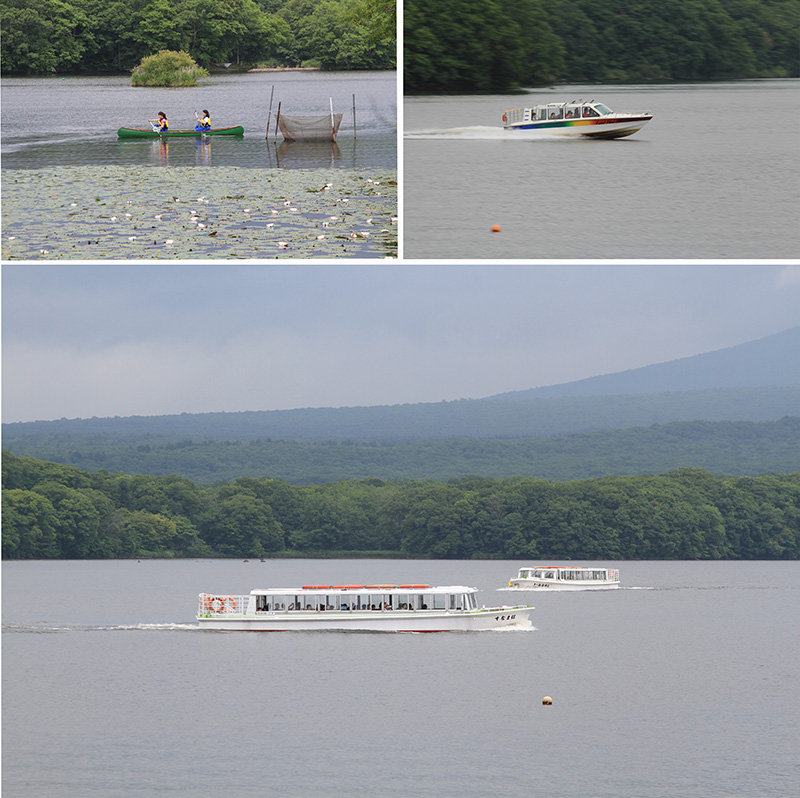 The weather was good for walking but not good for photography. Good because it was not hot, it was cool and windy. Bad because the sky was misty and cloudy and it hid Mt Komagatake from our sight. 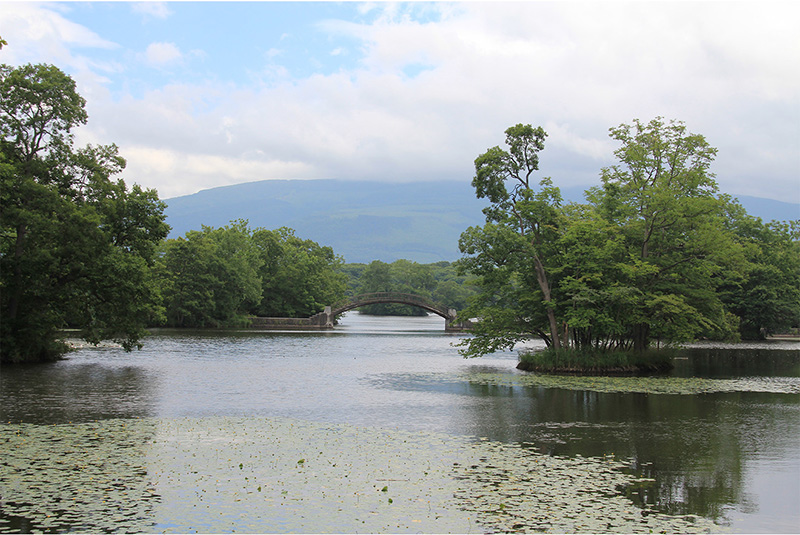 Along the walking course we came upon a cafe by the lake and outside the cafe was a free parking space! Our car was parked at the main carpark where all the tour buses and cars parked and the charge was ¥500 per entry.

I knew from google map that there was a cafe here but did not know that there was also a free car park here too. We could have save ¥500 and walked the same exact walking courses.

We stayed at the lake as long as we could hoping for the sky to clear up so that we could at least take a photo of the lake against the backdrop of Mt Komagatake. Unfortunately, luck was not with us. After three hours at the lake we left for Niseko. 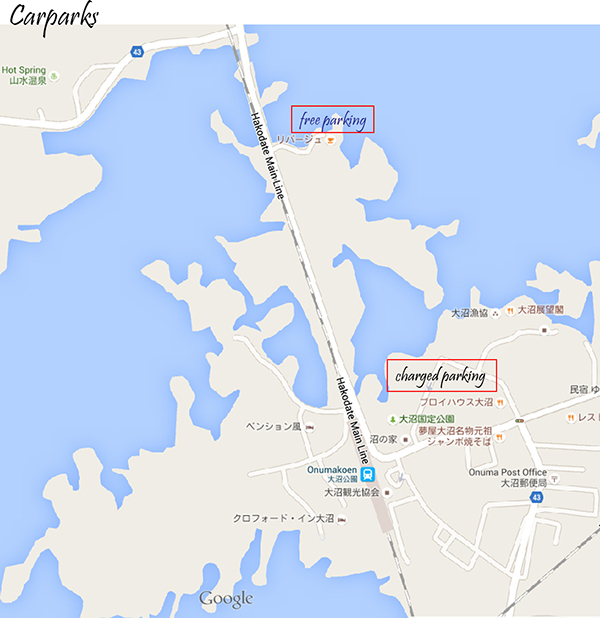 Our drive to Niseko was about 150 km which took about 2 hours. Along the way we were very anxious about the weather, the mist seemed to be rolling in. Occasionally we could see blue and clear sky ahead and just as we were feeling happy, the GPS would direct a turn. In the new direction we would see a dull and misty sky. By about 3pm we reached Niseko region and with heavy hearts we drove to our first Niseko destination, Niseko Annupuri Gondola. 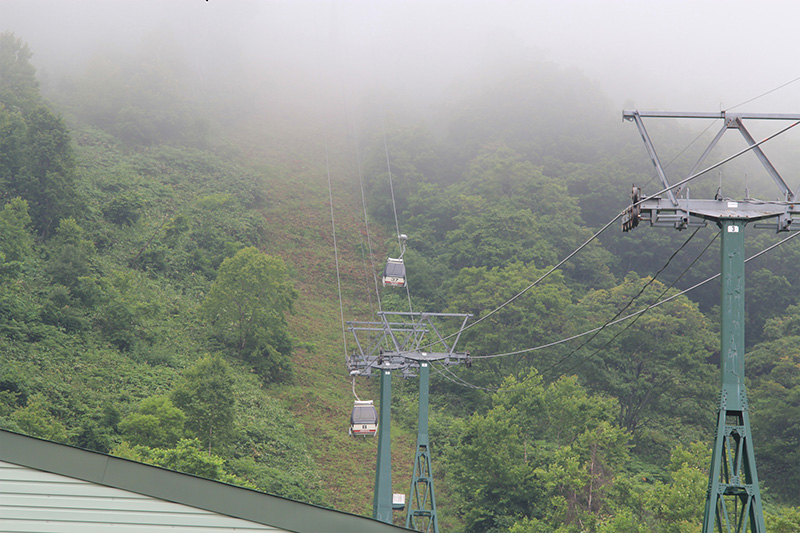 Our original plan was to go up the ropeway to the observation deck. At 1000 metre level on Mt Annupuri we would have a top of the world view. Unfortunately this view was not ours to enjoy as we saw the gondolas disappearing into the mist on their went up Mt Annupuri.

The gondola operator told us that up in Mt Annupuri the visibility was zero. When we asked him about a likelihood that the weather would be clear in the morning as we were thinking of coming back the next day. He shook his head and told us that not one person went up the gondola since he started operation in the morning. I guessed indirectly he was telling us that it was wishful thinking.

Niseko is an area where a number of ski resorts were build on the slope of Mount Annupuri. Niseko is famous place for skiing in winter, but even in summer it is also good place to visit. Annupuri Gondala was a summer gondola built to bring summer visitors to the peak of Mt Annupuri for a vast and beautiful panorama view of Mt Yotei, Lake Toya, Mt Usu and Funka Bay. 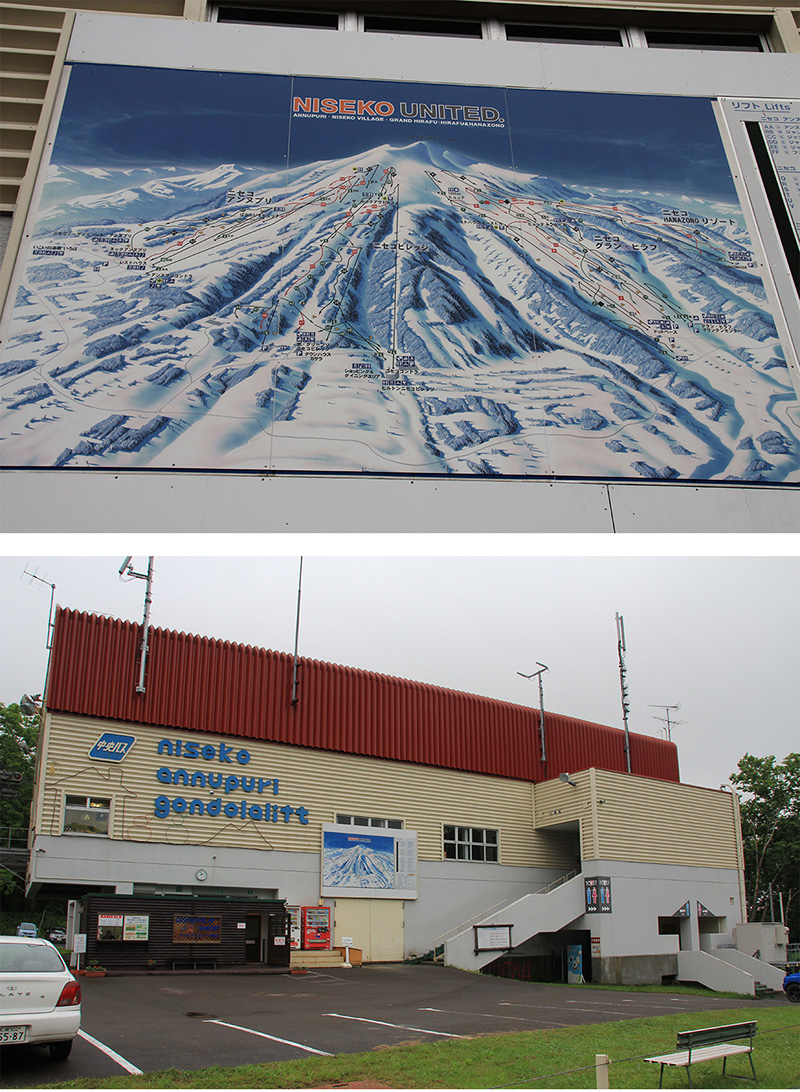 Milk Kobo was our second destination at Niseko it was only 6 km from Niseko Annupuri Gondola and did not take us more than 10 minutes to reach.

Milk Kobo is owned and operated by Niseko Takahashi Dairy Farm. It is well known for its delicious sweet which use fresh high quality organic milk from their own farm. It is said that Takahashi Dairy Farm treats its cows much in the same way the Kobe Beef farmers treat their, with respect and care. Cows are milked by hand, raised on the highest quality natural feed and drink the pure, crystal clear water from nearby Mount Yotei. The result is a series of delicious, fresh and sweet treats make from milk produced by these cows. 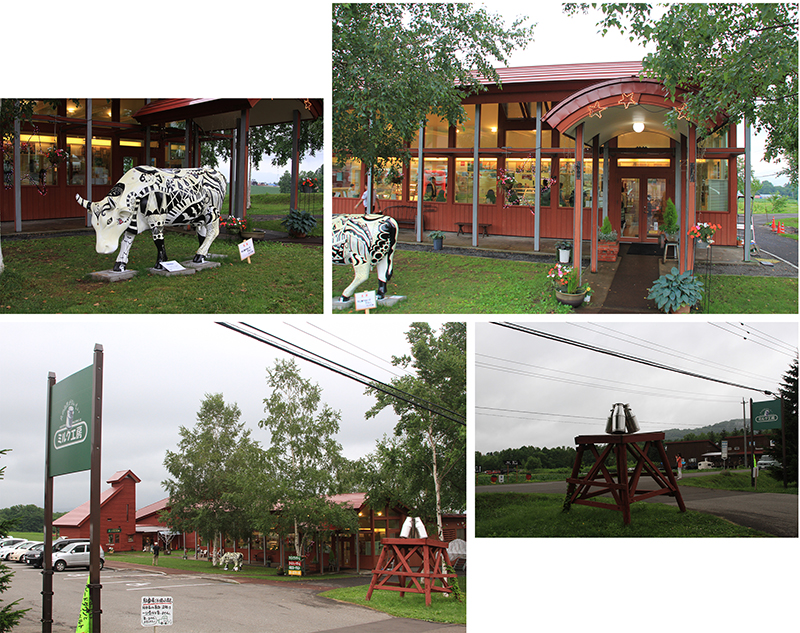 After reading so many good reviews of Milk Kobo, we just could not drive through Niseko without paying a visit to Milk Kobo.

Milk Kobo was actual quite a vast area with several buildings. There was a cafe, a restaurants, a souvenir stores, retail shop and farm houses. When we entered the retail shop we saw an array of tasty cream puffs, ice cream, yoghurt drink, milk puddings and cakes. The place was packed with people, it was obvious that Milk Kobo was loved by local people and also a famous tourist attraction in Niseko.

We bought cheese cake (six tiny piece in a box), one cream puff, one souffle and one milk ice cream. The total cost was ¥1300, not cheap at all. 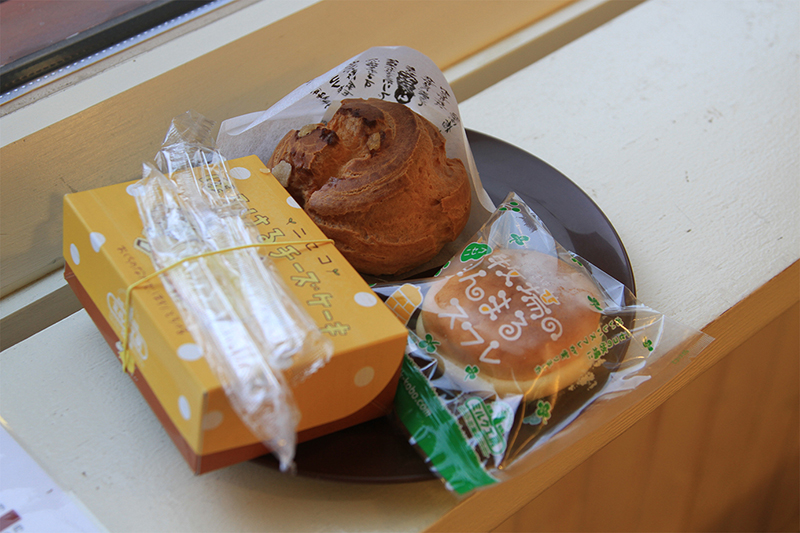 They tasted nice but not to die for. As for the milk ice cream it did not taste as good as some other milk ice creams that I had eaten in other parts of Hokkaido.

Next to Kobo Milk was a sunflower field called Higashiyama Flower Hills. I had seen very beautiful photos of this sunflower field with a mountain as its backdrop. Unfortunately we arrived too early in the season and most of the sunflowers were still in their buds. 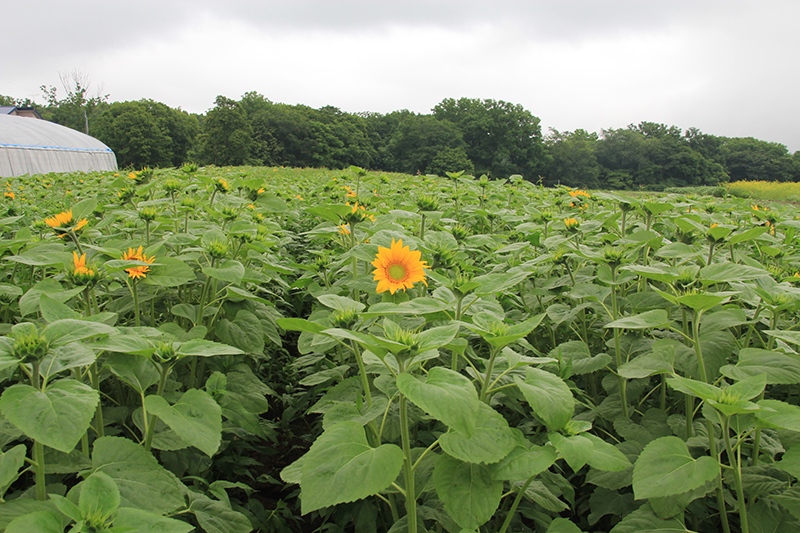 Dinner at Abu Cha2 in Hirafu

We were standing outside Abu Char2 at 6pm and saw the signboard stating that the restaurant would not open till 7pm. We had been walking around the town of Hirafu for about an hour looking for a nice place for dinner. 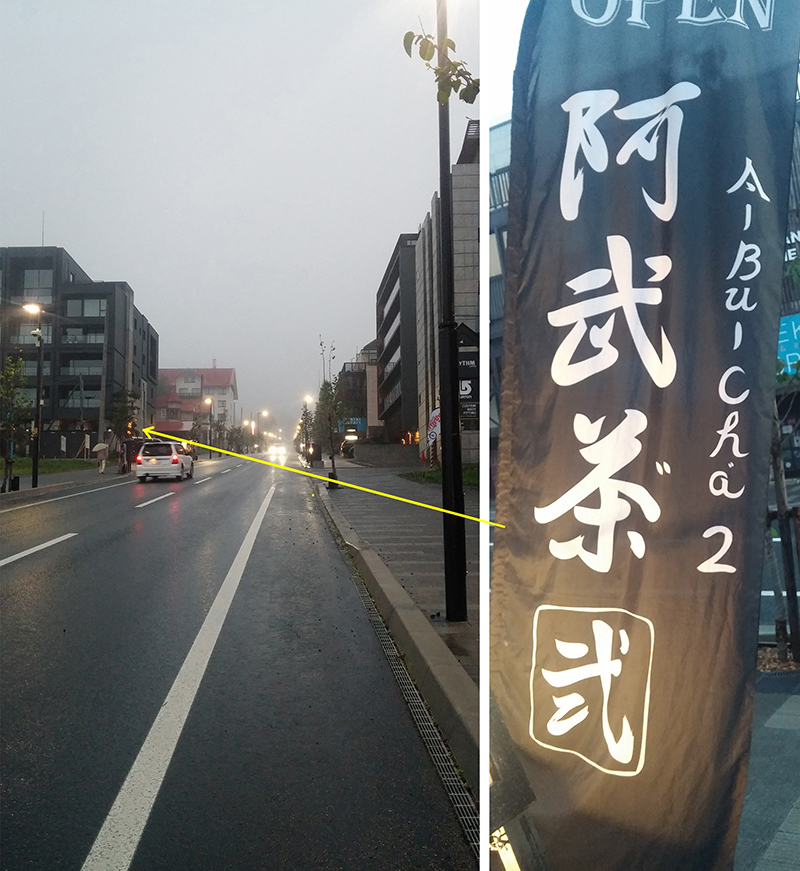 The weather was too misty and cold, most of the shops were closed and the road was quite deserted. It was no fun wandering around the place in such gloomy weather so we went back to our hotel rather than to wander around on the street till the restaurant opened for business. We returned to Abu Char2 at about 7pm.

This restaurant was a nice surprise. It did not serve tradition Japanese food but a Japanese food with a western twist. We ordered one of its original specialties, salad ramen. It tasted very good, it has tomatoes, tuna fish, a half boiled egg, lots of benito and cold ramen, very yummy. We also ordered a Hokkaido beef dish and the beef was tough to eat. This was our second time eating Hokkaido beef, the first time was a BBQ and now a cooked dish, both times we found the meat tough. 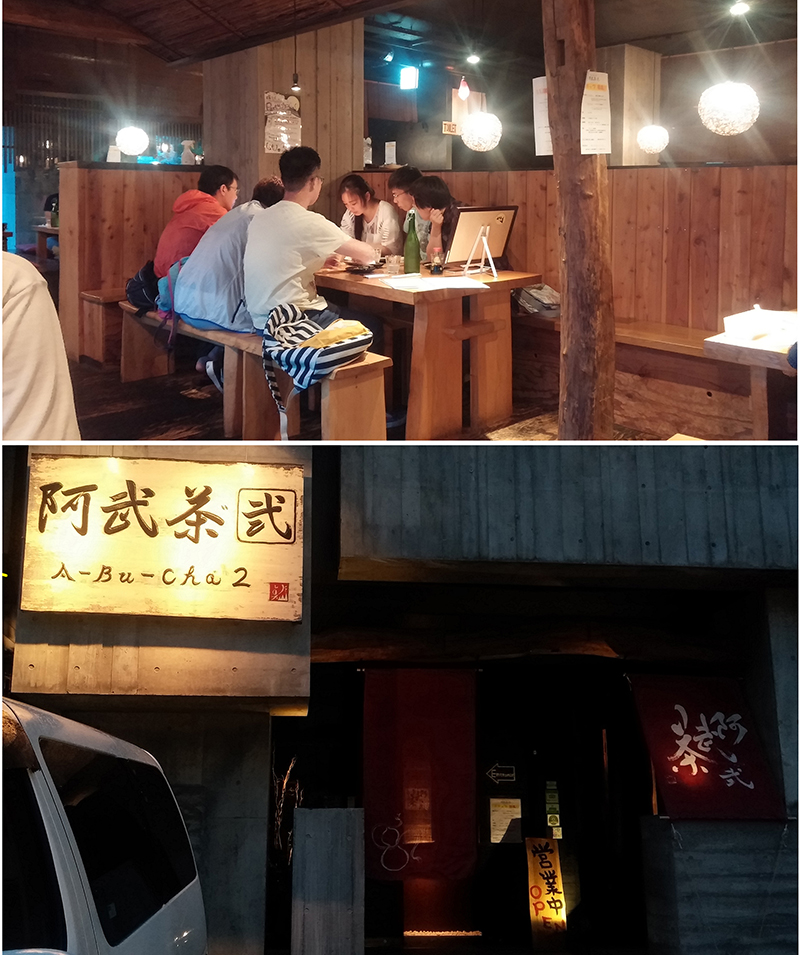 We were glad that we ended up eating at Abu Cha2. Our hotel receptionist had recommended many restaurants and we could have ended up in another restaurant. It was fortunate that most of the restaurants were closed for the day except for Abu Char2 so inevitably we were forced to eat at Abu Char2 which turned out to be a great place. I was told that in Winter when the crowd descended in Niseko one would need to make reservation a day in advance just to eat a meal at Abu Char2. 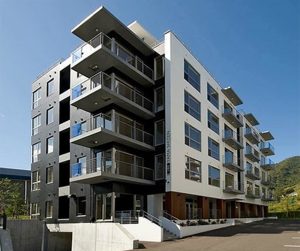 I had booked a room for two at Yama Shizen in Hirafu town. It costed $146 a nite. The room came with ensuite bathroom. Meals were not provided.

Two days before my arrival Yama Shizen was already sending me emails, requesting me to do online check-in so that the final process on site would be faster. We had to be at the reception counter before 5pm as the staff would leave after that.We arrived at Yama Shizen half an hour before 5pm and check-in very easily as most just need to pick up our key. Yama Shizen consisted of two very modernize apartment block, the east and the west. Our apartment was on the third level and it was very well furnished and luxurious. 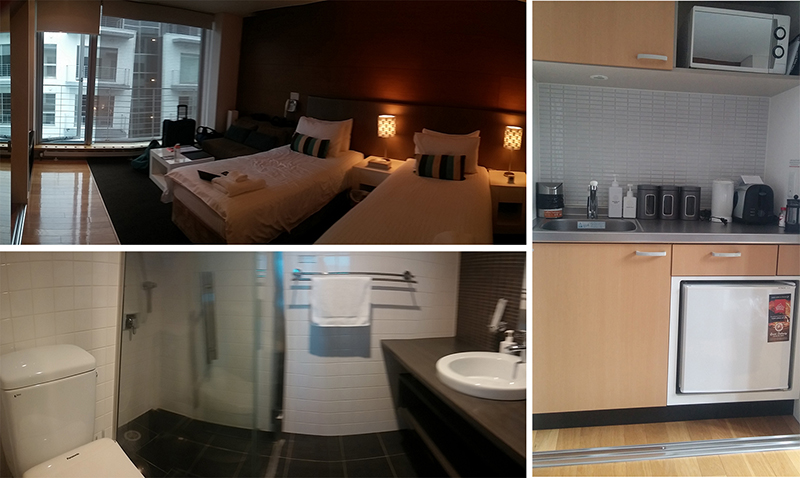 The room and ensuite bathroom were huge! Its TV had three English channels and this was absolutely rare as most of the hotels I had stayed provided only Japanese channels. The room had wifi, microwave, toaster, washing machine, tumble dryer and many other stuffs. The only thing missing was an air conditioner. So we had to leave the windows opened all the time or the room would get stuffy. Parking at the Hotel was ¥500 yen a day.