Our plan for the day

Our plan was to drive from Niseko to Shakotan Peninsula which was about 160km apart. We intended to visit two of its more famous sights which were Cape Kamui and Shimanui Coast. After that we would drive down to Shakotan Town where we would spend a night. 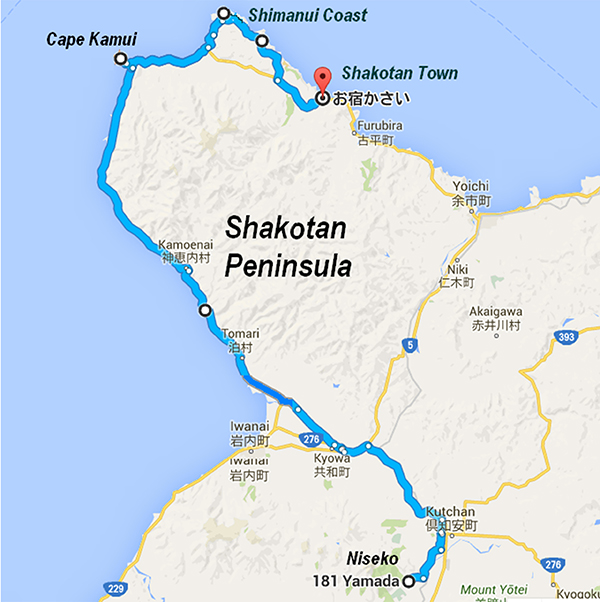 We achieved our targets, unfortunately Cape Kamui was shrouded in mist, visibility was zero.

When we woke up in the morning, we were disappointed to see that everywhere around us was still misty. We had to abandon our plan to go up Mt Annupuri because like the day before the visibility would be zero.

Our next destination was Cape Kamui which was about 78km away. As we drove toward our destination we were rather concerned about the poor weather. We were hoping that soon the mist would lift, the sky would clear and the sun would come out.

Midway into our journey, the mist condition worsen, instead of lifting it was settling down onto the ground. It was at a location just after rounding the corner passing Ryujin Cape that we were greeted with a surreal sight of nature. 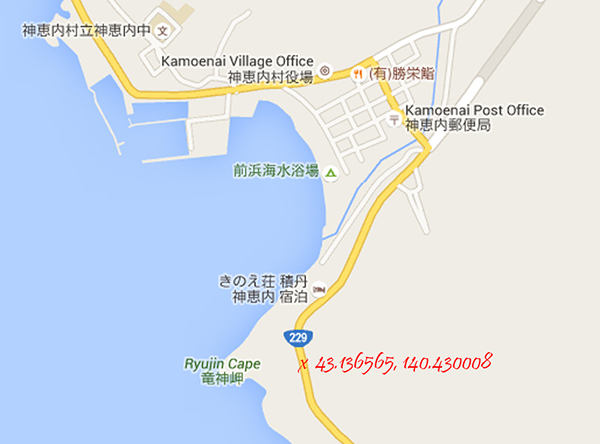 Near to Ryujin Cape – a coincidental scenic sight

Right in front of we saw a village in the cloud or was it a village by the sea. The village was at the meeting point of the cloud and the sea. The scene in front of us was very mystical very unreal, we parked our car by the roadside and came out to take many photo shots of it. 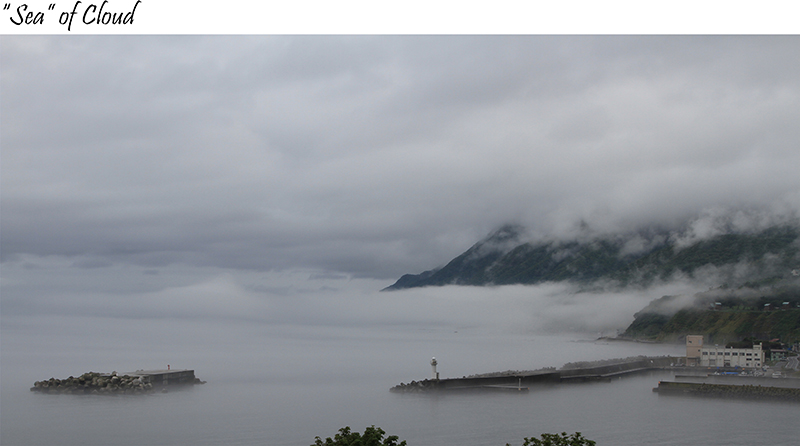 A sight that was beautiful beyond words

Though from where we were stood we were very far from the village and yet we could hear the distinct sound of a boat chugging in the water. Then we saw a fishing boat passing the white light house floating on a “sea of cloud”.

By about 11 am we reached the carpark of Cape Kamui unforturnatately the mist had gotten denser and had settled down lower on the ground.

Cape Kamui was one the my most anticipated sightseeing locations. I had seen many beautiful photographs of Cape Kamui, and its beautiful scenery had drawn me into placing Cape Kamui as my “must visit” location in Hokkaido. 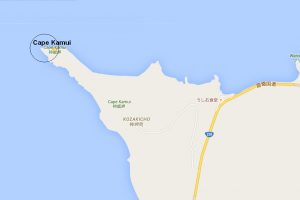 I was very reluctant to leave Cape Kamui without walking to the end of the cape and without seeing the “dragon body” of the cape. We decided to wait for the mist to lighten up so we walked into a restaurant just in front of the carpark to wait. 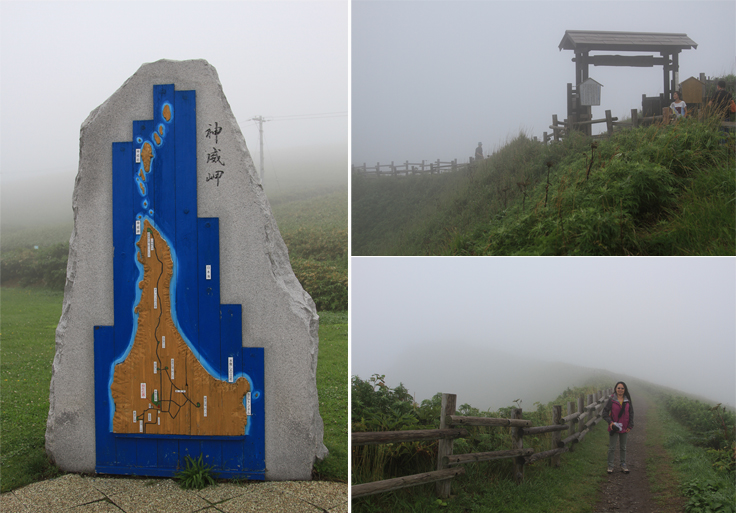 After about an hour of waiting (surfing the internet, catching up with emails and messages) we concluded that the misty condition was going to remain the same throughout the day. We had no choice but to start our walk toward the end of the cape. We did not get far, at the wooden doorway to the cape the visibility was down to almost zero. There was where we decided to turn back. We would reorganise our tomorrow itinerary and return to Cape Kamui again.

At Cape Kamui carpark we set the car GPS system to route us to Shimanui coast which was about 15 km away. With the misty condition persisting through the day we did not hold much hope that we could see the famous “Shakotan Blue”. 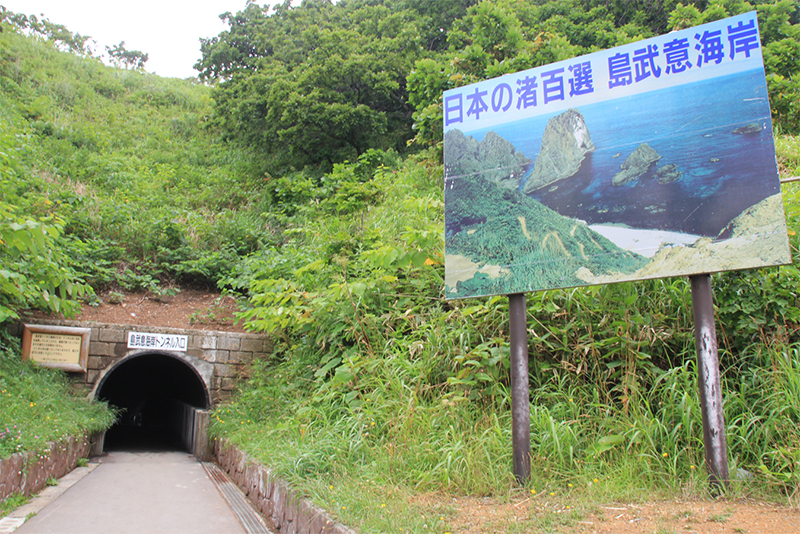 From my research Shimanui coast is located on the edge of of Shakotan Peninsula. It has a amazing view and is one of Japan best coasts. The color of the sea is crystal clear and blue and is called “Shakotan Blue”. Though the mist had lifted the sky was still very gloomy and without a clear blue sky we were not too hopeful of seeing a clear blue sea.

The tunnel was dark and slightly damp but luckily it was not too long. At the end of the tunnel was an observation deck overlooking the Shamanui coast. The “Shakotan Blue” was not at its best, though we did see some blueness in the sea. The water was very clear. There was a long flight of zigzap steps lead down to the beach. We took about 10 minutes to walk just halfway down the stairs and decided not to go any further. We thought that the view looked much prettier at this high point so there was no need to go down to the beach, besides we could see the mist setting down again. 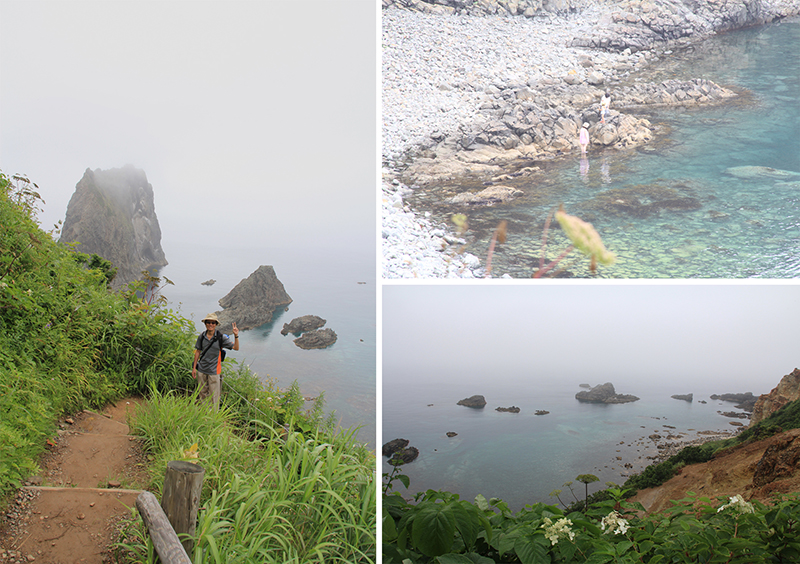 Most people would have gone straight to Otaru after visiting Cape Kamui and Shimamui Coast. After all Otaru is a big city with many hotels and restaurants. In our case our plan was to stay overnight in one of the towns along the coast of Shakotan Peninsula. We had read so much about the seafood delicacies (especially sea urchin) that were caught in summer and served fresh by the fishermen of Shakotan Peninsula, such that we decided we must stay in a hotel on coast that would serve dinner and breakfast.

I chose Shakotan town to stay for a night because I came across many websites giving good reviews on the seafood meals served by Oyado Kasai which was located in this town. So we booked a room with Oyado Kasai. We checked in to the hotel at around 3 pm. There were not much to do in the hotel so we walked out to explore the port nearby. 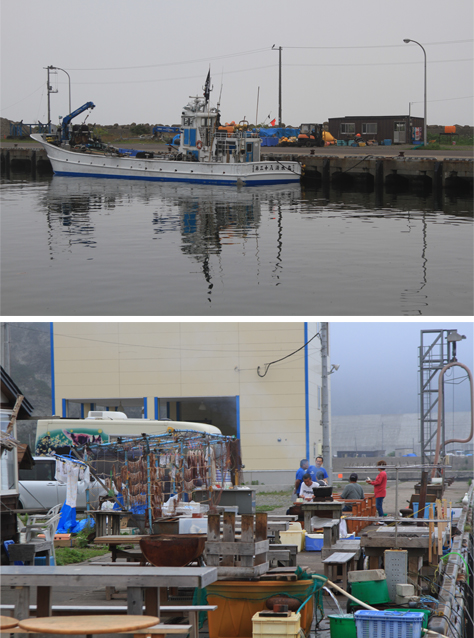 Shakotan was a very small town and the port was only two streets away from our hotel. There were several fishing boats anchored at the dock and we saw fishing nets hung out to dry. The air had a salty and fishy smell and there were many seagulls circulating around the port.

The port was very quiet and we did not see anybody until we came across a housed in a “container” liked structure. Behind the restaurant we saw a few people cooking over a pot and eating seafood.

Looking at them I was already anticipating my dinner this evening at Oyado Kasai. Since there was not much to see at the port we turned back to our hotel to wait for our dinner. 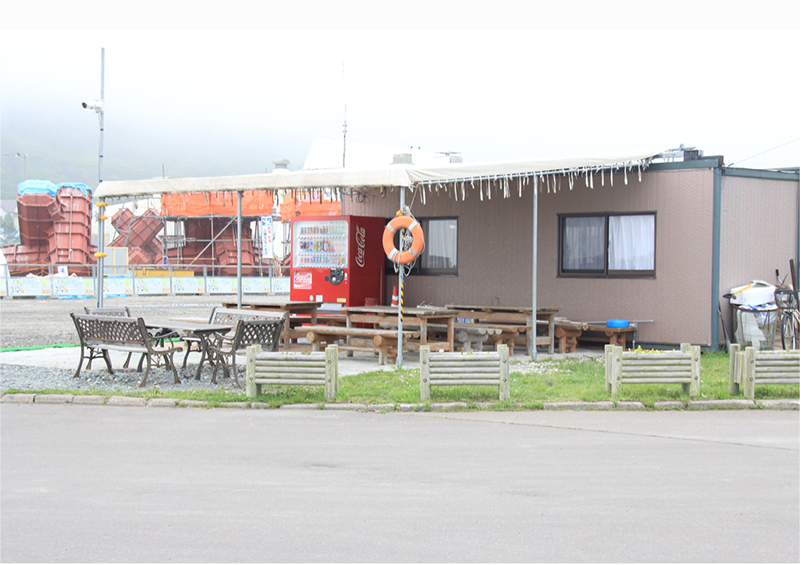 When we checked in to the hotel earlier in the day, the chef who was the male owner of the hotel asked for our dinner preference. Western or Japanese? We told him definitely Japanese and we would eat all types seafood.

Near to dinner time, we were in our room when the lady owner of the hotel came by and led us to a private room where she had already set up a low table and two low Japanese chairs. The dishes were laid so prettily on the table and she invited us to sit down to start our meals. 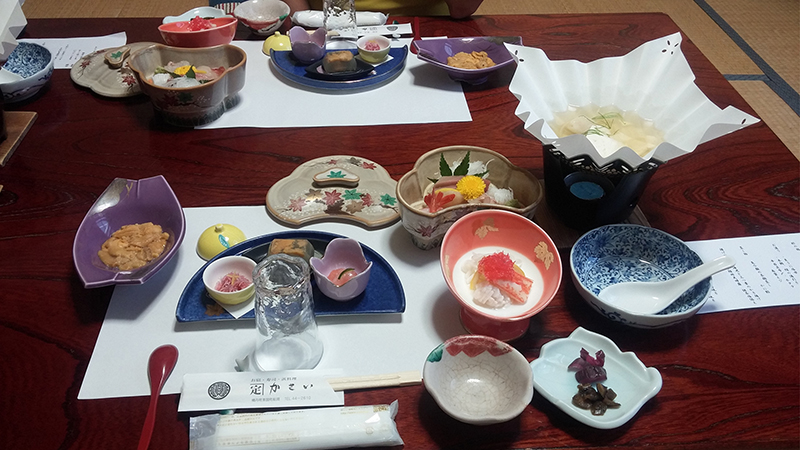 On the table was a white paper listing down the full course of our dinner. It was of not much help as I could only make out a few words so it was as good and not knowing.

I had never eaten sea urchin before, though I had read alot about it being a delicacies and a must try item in Hokkaido. It tasted slightly salty, soft, not as rich (fishy) as I expected. The fresh sashimi, cuttlefish, salmon roe and prawn tasted very delicious and sweet. 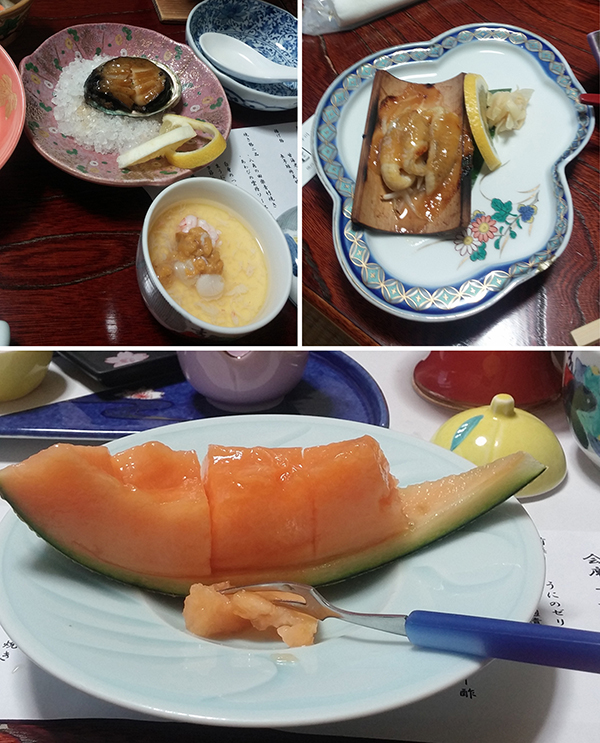 We thought that the food that was laid on the table was the complete set of our dinner, but surprising as we ate the lady owner brought in more food. She brought in cooked food that was freshly prepared from the chef kitchen. There was grilled abalone, bamboo cooked fish and chawanmushi. The final item was a super sweet honey dew for desert. 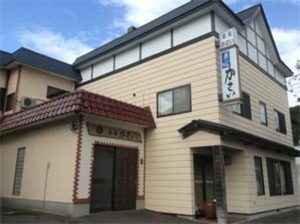 Normally I would not pick “Oyada Kasai” as our accommodation as it did not provide ensuite bathroom in any of its rooms. It has common bathrooms (gender based) with no privacy for individuals. I was definitely not comfortable with the bathing arrangement.

Unfortunately hotels with meals along the Shakotan coast were outrageously expensive especially those that provide ensuite bathrooms. So I had to discard by room requirement and focus on the meals aspect, and narrowed my search to Oyada Kasai. The room costed ‎¥24200 ($275 SGD) and came with dinner and breakfast. 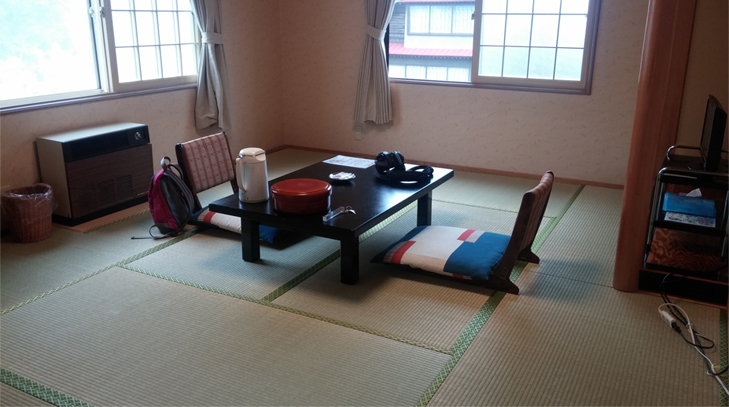 My room had an attached outer small room. It was a windowless room where we exchange our house slippers with room slippers and vice versa when entering or exiting the inner sleeping room. In that room there was a heavy stench of salty seaweed that persisted for the whole day. The smell was not detected in the inner sleeping room so it definitely did not come from the sea through the opened windows. I believed that the owner must have stored some food stuff in the outer small room and removed it only when the room was let out. There was no wifi in the room as the room was too far from the router. 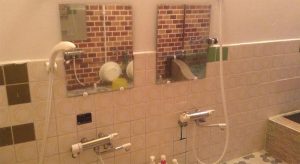 This hotel is a wooden house so I could feel the wooden floor shook when people walked along the corridor. Bathroom were definitely shared. I went to the bathroom at about 10pm and found it empty. I took a super quick shower and just after I put on my clothes in the adjoining room a lady came in and started stripping. I left quickly feeling thankful that we were not bathmates!!!!