Our original plan was to drive from Shakotan Town of Otaru in the morning. The distance was about 435km and the drive would take about a hour to complete. Along the way we intended to stop at Yoichi to visit Nikka Whisky Winery. After which we would drive to Otaru to take part in “Otaru Tide Festival”.

Today we had to adjust the itinerary to squeeze in a return trip to Cape Kamui in the morning. For the rest of the day the original itinerary would resume. 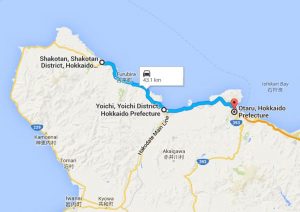 The second meal at Oyado Kasai was as delightful as dinner though of a smaller scale. 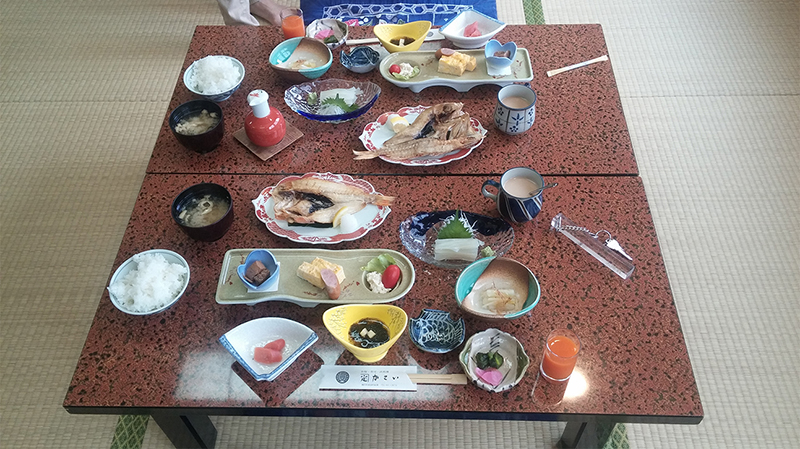 Breakfast was served in a common breakfast room. It was a Japanese room with low tables and chairs. We were very impressed with the pretty picture made by the colourful design of the dishware and the food on the table and could not resist taking photo shots of them. The lady owner must be very used to her customers taking photo shots of the food as she quicky came over any offered to take a photo of us together with the food. 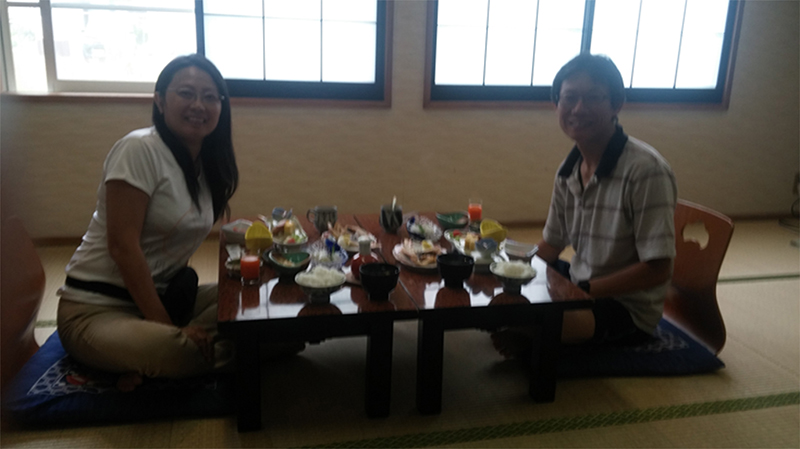 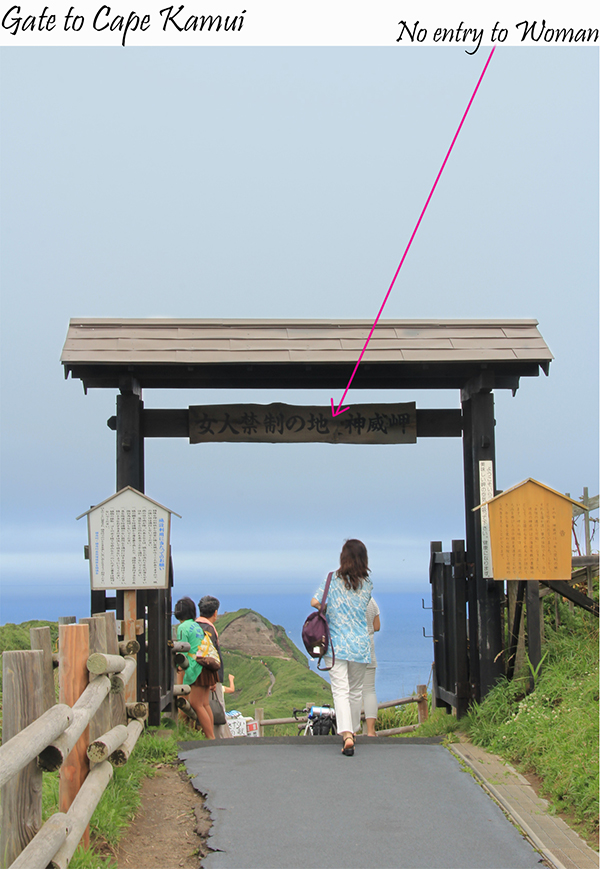 Wooden gate to the cape 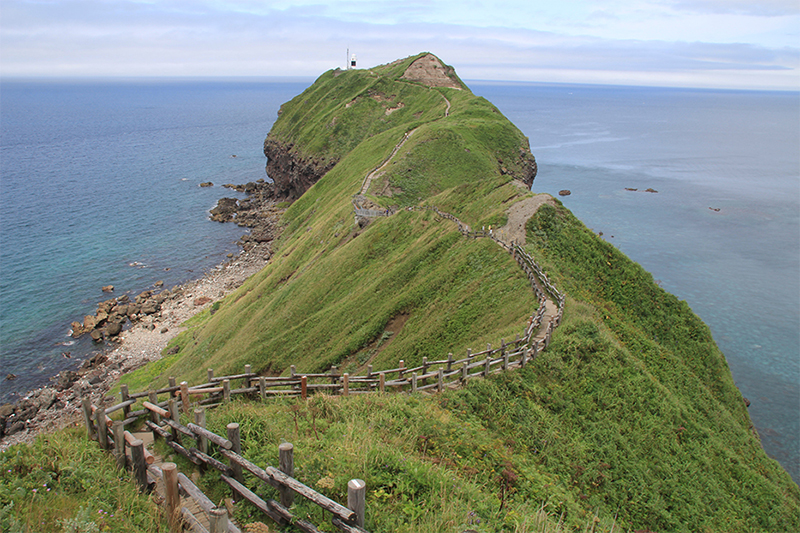 Though the sky was not blue and was more of a greyish color, there was no mist or rain. The entire look of the place was so different from the day before.

The tip of the cape was further than I expected and that was a good thing since the walk would not end too soon for me. The views were fantastic no matter which way I turned my head I saw beautiful postcard scenery.

After some down and up steps we reached the lighthouse near the tip of the cape. The lighthouse looked quite well maintained so it must be still in service. 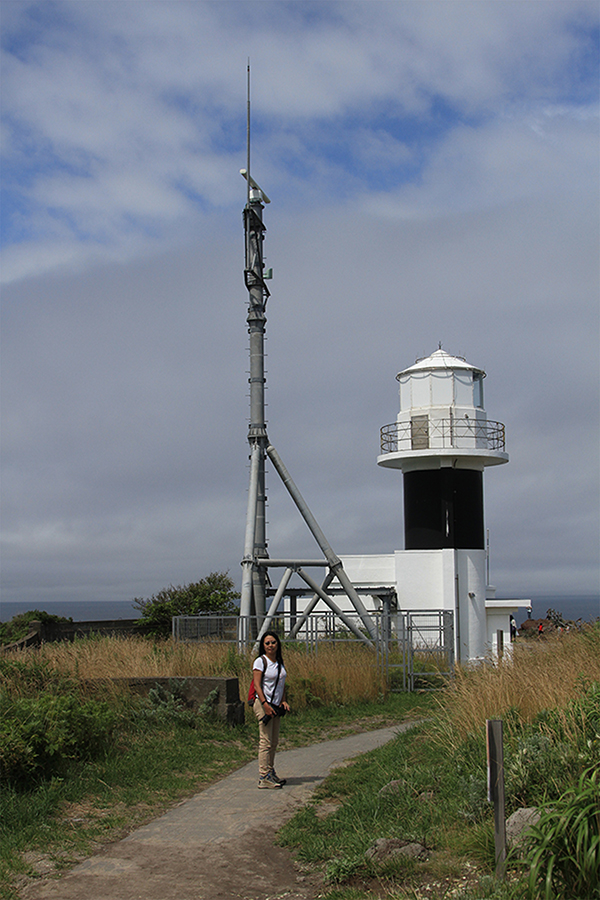 A few more steps ahead brought us to the end point of the boardwalk which broadened out into an observation deck. From the deck we could see a few pieces of rocks that seemed to be part of the cape long time ago but were now submerged.

Standing at the end of the cape with the wind wiping against our faces we felt so happy to have return to this cape. Our itinerary was flexible because this was a DIY tour and we were not force to move forward once we passed a location. 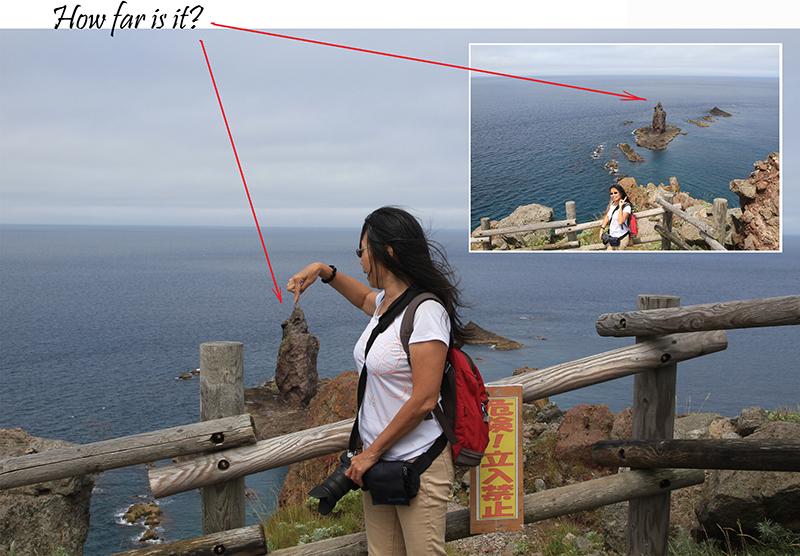 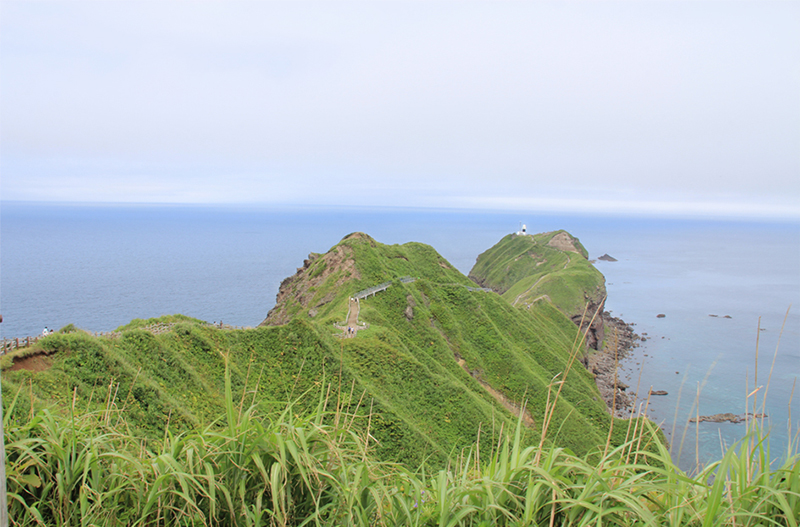 Cape Kamui (seen from another angle)

We drove from Cape of Kamui to Yoichi, the distance was about 48km and we took about an hour to reach Yoichi. We drove passed Nikka Whisky Winery main gate and could not see an entrance for car. 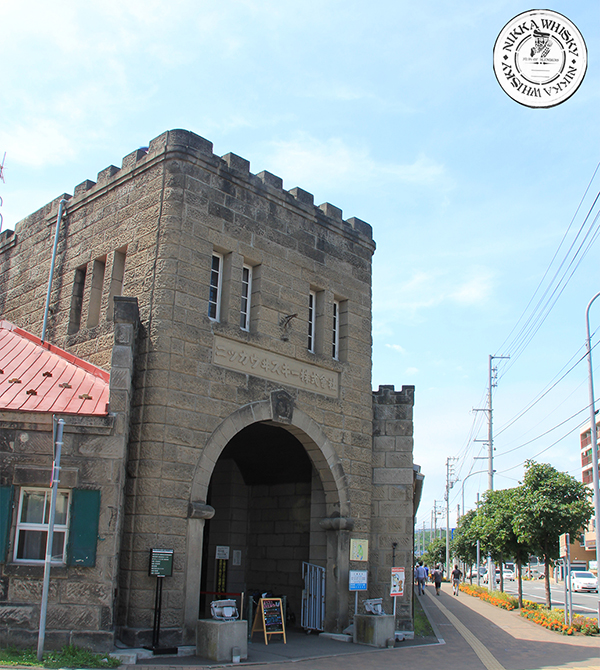 We looped one round and still could not find a car entrance to the Winery so we parked our car in a paid carpark just opposite the main gate. The parking charges was ¥100 an hour.

Nikka Whisky is one of Japan’s top whisky makers. Its distillery in Yoichi was built in 1934 on a site chosen for its clear water, brisk air and rich peat. Taketsuru (founder of Nikka Whisky) believed that the conditions in Yoichi best resembled those found in Scotland, where he studied the whisky making techniques, and would be perfect for recreating Scotch Whisky. The traditional distillation process that he brought over from Scotland has remained relatively the same till today. Nikka whiskies are recognized as among the world’s best single malt whiskies and have won many awards. 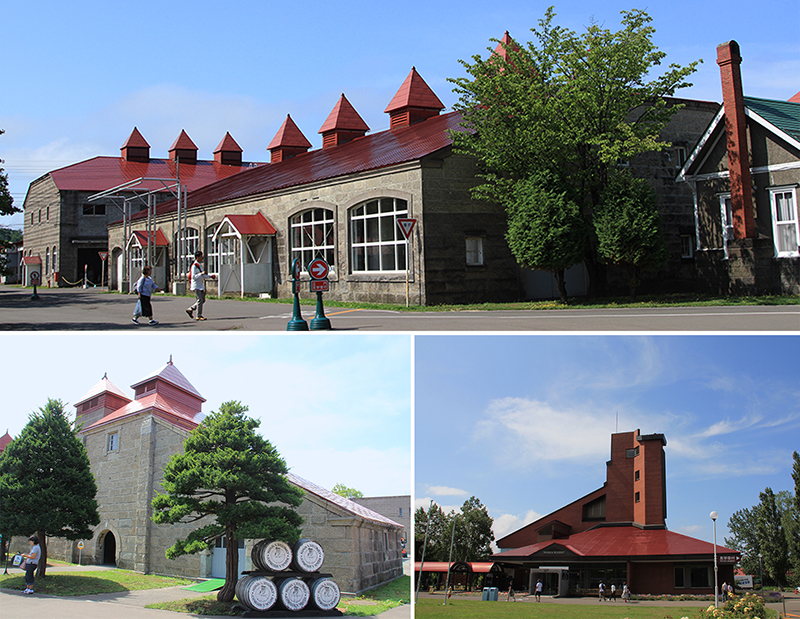 Buildings in the compound of Nikka Whisky Winery 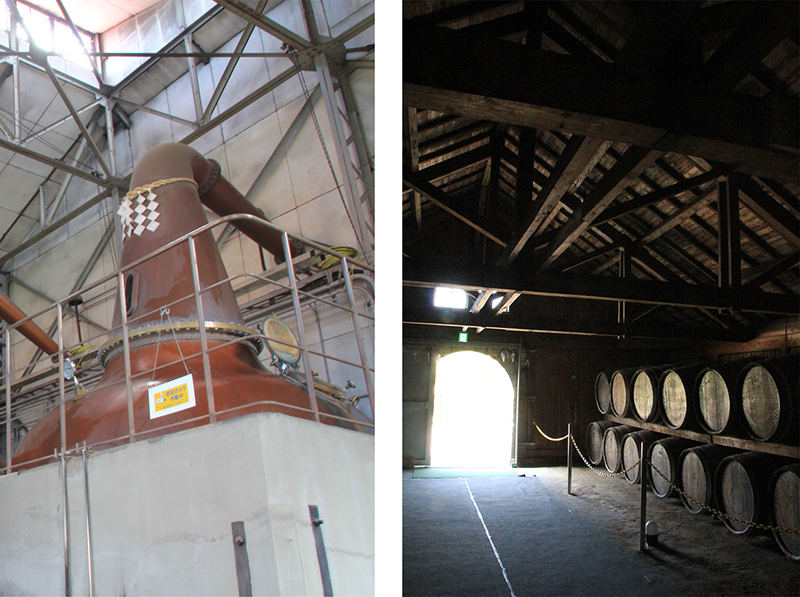 Near the end of the walk, just as we were approaching the building that sold souvenirs we came upon a huge carpark. This carpark was in the compound of Nikka Whisky and it was free of charge! This free carpark was accessed from another Nikka Whisky entrance which was opened to cars and buses. 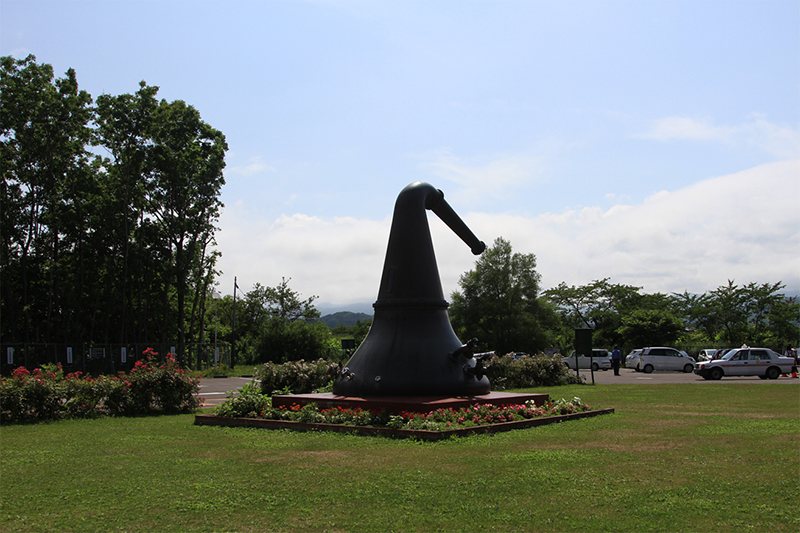 From Nikka Whisky to Otaru was only a 20 km drive. We drove straight to our hotel in Otaru and checked in. The time was about 4pm when we got out of our hotel in search for the Otaru Tide Festival celebration ground. Otaru was a small harbour city northwest of Sapporo. From the early days of Hokkaido colonization in late 1800s, Otaru served as a major trade and fishing. 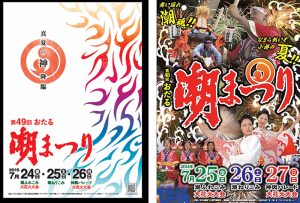 Otaru Tide Festival was an annual festival and 2015 was its 49th year of celebration.This 3-day festival that starts on a Friday gave thanks to the sea and is one of the most popular sea festivals in northern Japan. More than 10,000 participants take to the streets to dance and numerous paper lanterns decorate the whole city. At Otaru Wharf, some 4,000 paper lanterns were set adrift onto the sea and many boats and ships parade around the bay amongst them. Other attractions include parade of mikoshi portable shrines and fireworks.

We were not too sure as to where would be the centre of activities for the festival. So we decided to walk toward Otaru canal which was the most famous attraction of Otaru city.

Otaru Canal was at the central part of the city’s busy port in the first half of the 20th century. Goods were transferred from large vessels onto smaller ships that sailed up the canal to off load these goods to the warehouses along the canal.

The canal went out of use when modern dock facilities were built to handle large vessels. In 1980 part of the canal was beautifully restored and the warehouses were transformed into museum, shops and restaurants.

From our hotel to Otaru canal was only 500 metres and on foot it took us less than 10 minutes to reach. The canal with its refurbished warehouses looked lovely, the cobbled walkway gave the place a nostalgic atmosphere. As we strolled along the canal we saw several roadside artists displaying their works to tourists. 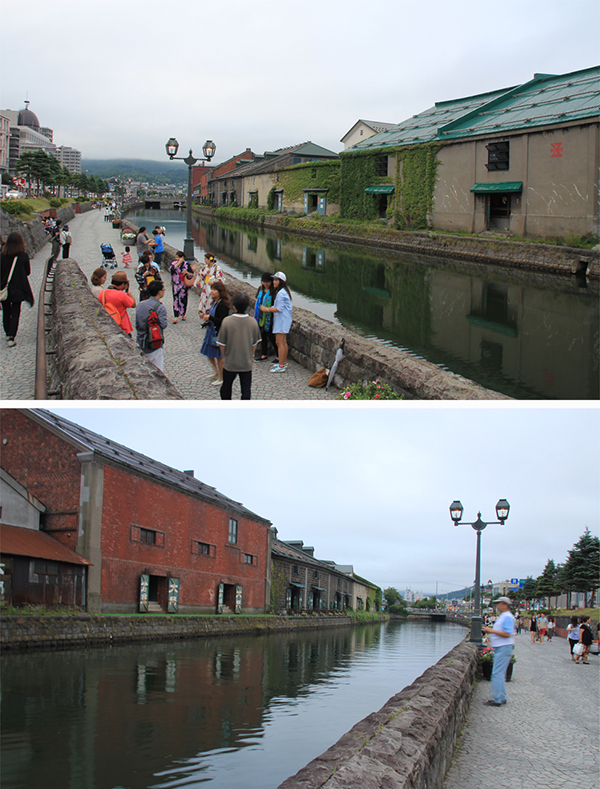 The scenic stretch of the canal was only 300 metre long, it started from one bridge and ended on another bridge. At the second bridge we turned and walked toward the dock, that was where we found the centre (big carpark) of the Otaru Tide festival Celebration. 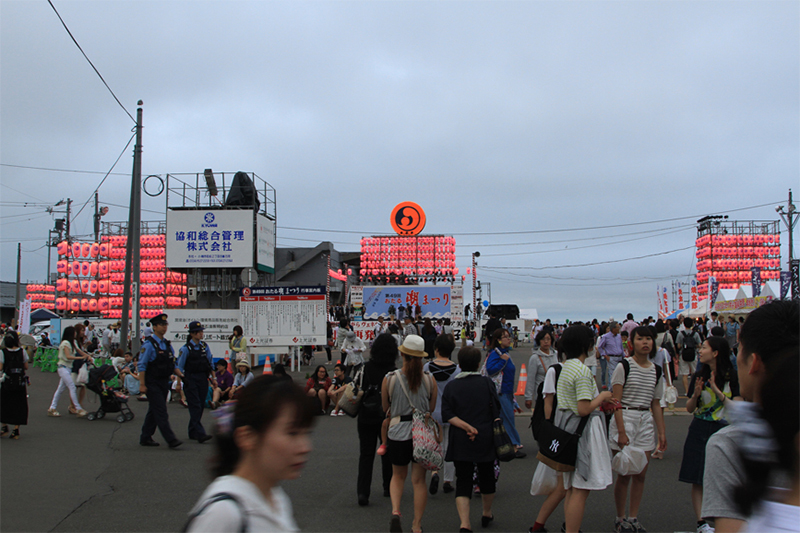 Festival square at a big carpark by the port

Hundred of lanterns were already lighted and the place were crowded with many people. We walked and saw a huge white notice board detailing the events for the three days. There would be fireworks tonite (the first night) and again on the last night. Tomorrow in the afternoon they would be a parade.

Firework at the Port

We walked around the port in search of a good place to see the firework. We found a long stretch of road just by the side of the water (at the dock) where many locals had laid their floor mats. We deduced that this must be the best place to view the fireworks. It was only 6pm and the firework would not start till 8pm. 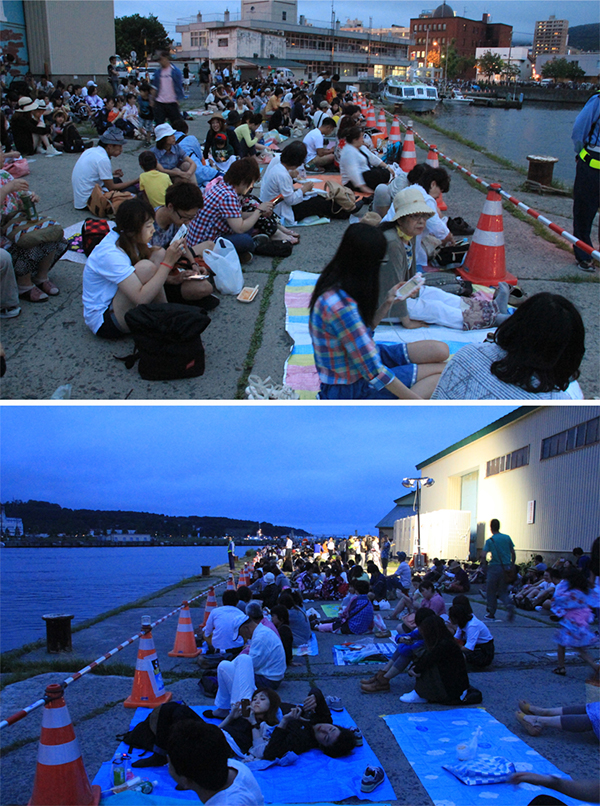 Crowd waiting for the fireworks to start

We looked around for a good spot near the dock edge, and managed to squeeze ourselves onto a small space between two floor mats. Yat Thong stayed put to stake our claim of that tiny space as for me, I went off in search of dinner.

Food could easily be found as a section of the port was setup as a huge food bazaar. There were many stalls and they sold all types of food and drinks. I was spoiled for choices.

I packed our food and brought it back to Yat Thong and we had a picnic dinner just by the dock.

The fireworks started on time and lasted about 20 minutes. Every burst was greeted with loud cheery admiration from the crowd. We enjoyed ourselves very much. 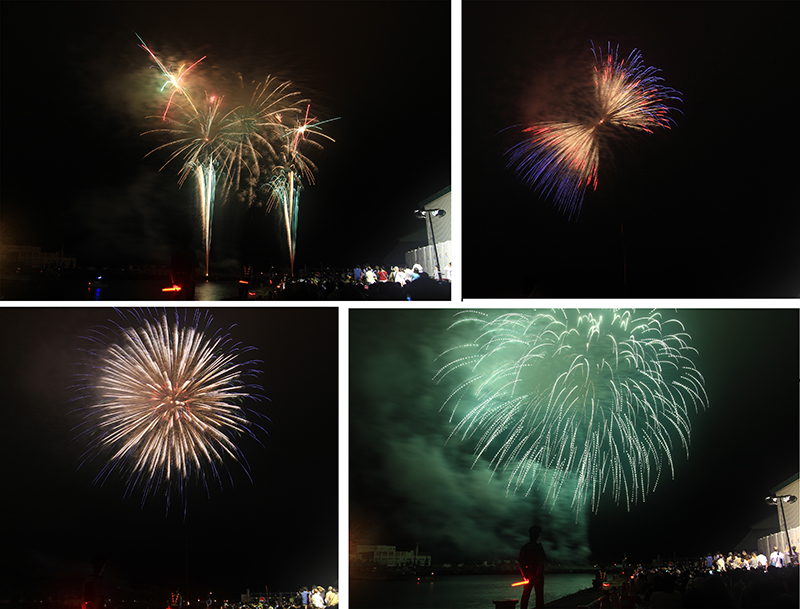 Fireworks on the first night of the Tide festival

After the fireworks ended we decided to call it a day and began our walk back to our hotel. On the way we past Otaru canal again and was mesmerised by its view at night. The canal was bathed in dark golden light, the entire atmosphere was very romantic. There were many people walking along the canal, locals and tourists. I was glad to visit Otaru during its festival because seeing its locals dressed up in yukata (summer kimono) strolling along the canal added a great deal of cultural favours into our experience. 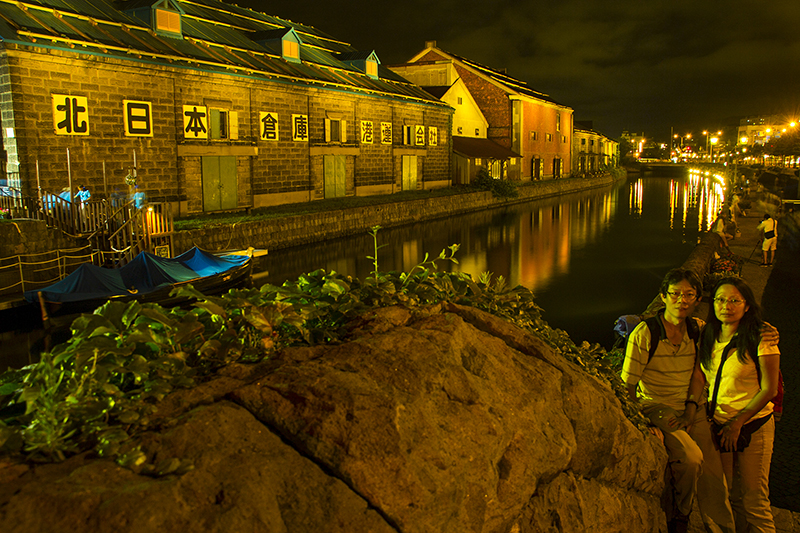 Our Accommodation for the Night (2 Nights) 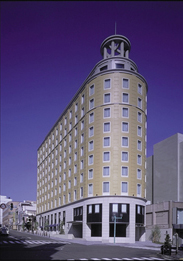 I had booked a double room at Authent Hotel Otaru at cost of ¥16200 (about 180 SGD) a night for two nights. The room came with ensuite bathroom with NO meals. Parking was at ¥1000 a night, which was the most expensive hotel parking of our entire trip.

I picked this hotel because it was within walking distance to Otaru canal, had parking facilities and its charges was comparatively cheaper than the other hotels in the vicinity. Its proximity to the canal and port would made it most convenient for us to get back late at night after our visit to the Tide festival.

I had also checked out the other Hotels just by the Otaru Canal and found their room charges one and a half or twice as much of those at Authent Hotel Otaru.

The room size was just comfortable for two. The ensuite bathroom size was good too, I could move easily without bumping into the walls or door. Though the price was steeper than other places in Hokkaido, it felt good with the extra space especially when we had to be in Otaru for two days and more time would be spent in the room.

One thing I found lacking was the limited number of charging points. There were only two! Good thing was the Wifi signal was strong in the room.

Our room at Authent Hotel Otaru

This booking was reserved under a popular hotel website about three months before departure, at that time of reservation the rates given by the website was the best compared to other websites. There after whenever I checked again my room rate was still the best and nearer to the date of check-in most hotels were fully booked.

I thought my room rate was good until we checked out. The hotel receptionist told me that they would not collect payment from me as the hotel website would charge the fee to my credit card. I was fine with it, I requested the receptionist to give me the total bill for my own recording purposes. Surprise, surprise, the bill stated that the room rate for each of was my two nights was ¥12800. Which added up to a total of ¥25600 ( $284sgd). I was charge about ¥6,800 more. Even though the rate was different there was nothing we could do. A lesson learnt…
Authent Hotel Otaru, Cape Kamui, Nikka Whisky, Otaru, Otaru canal, Otaru Fireworks, Otaru tide festival, Yoichi Distillery