Our plan was to spend the whole day sightseeing the the town of Otaru. The places of interest were Fish Market, Otaru Music Box Museum, Mount Tengu and Otaru Tide Festival Parade.

Except for Mount Tengu we achieved all our targets!

There were two fish markets near our hotel. Rinyu Market and Sankakun Fish Market. Rinyu Market is a morning market where fresh seafood from Otaru is sold there as early as 3am in the morning. This market is popular with locals, retailers and tourists. There are two restaurants that serve set meals of grilled seafood or donburi using fresh ingredients from the market. This market closes in the afternoon. 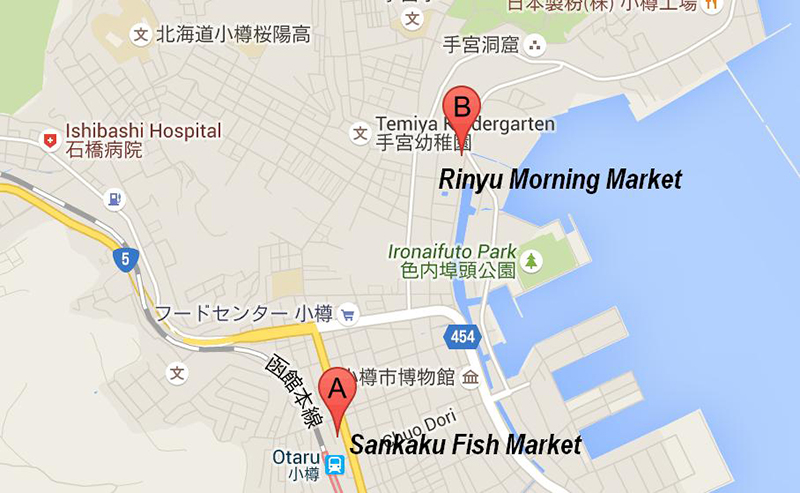 Sankaku Fish Market is a small seafood market located just to the left of JR Otaru station. The shape of the market is triangular. It was named Sankaku because it means triangle in the Japanese language. This market is opened from 8 am to 6 pm. Many tourists visited this market looking for fresh seafood.

We started our walk from our hotel to Rinyu Market, which was about 2 km away. I was probably half awake because we made a couple of wrong turns and ended up seeing Sankaku Fish Market just right in front us. By then we were even further away from Rinyu Market. We were hungry so we dropped the idea of walking to Rinyu Market which was at least 2.5 km away. 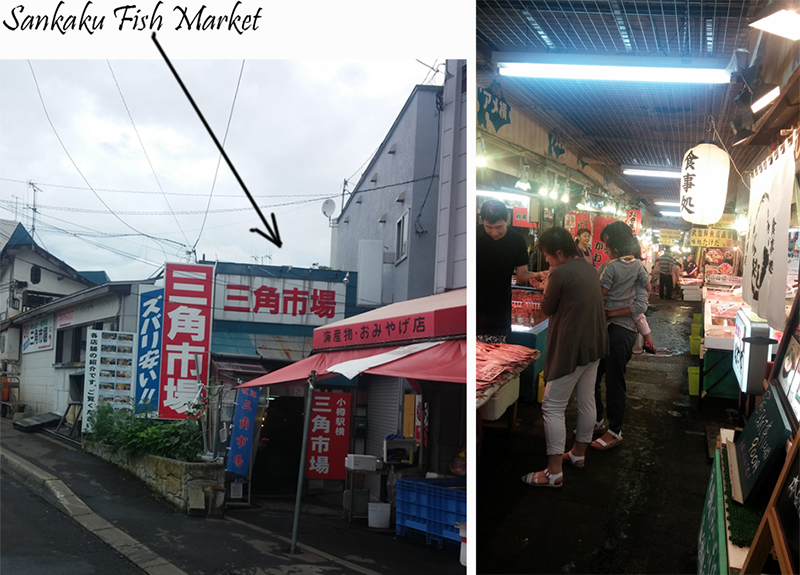 We found a stall that had great breakfast seafood pictures pasted all over the its front. The foods looked so yummy. We went in and sat down and order our seafood breakfast.

As we waited for our turn to be served we saw every other customers in the restaurant taking pictures of their food before eating. First thing that got into my mind was “Ahhh…. tourists….” We ate both raw and cooked seafood and they tasted as good as they looked. Our breakfast for two was ‎¥2160. After the wonderful breakfast we walked back to our hotel. 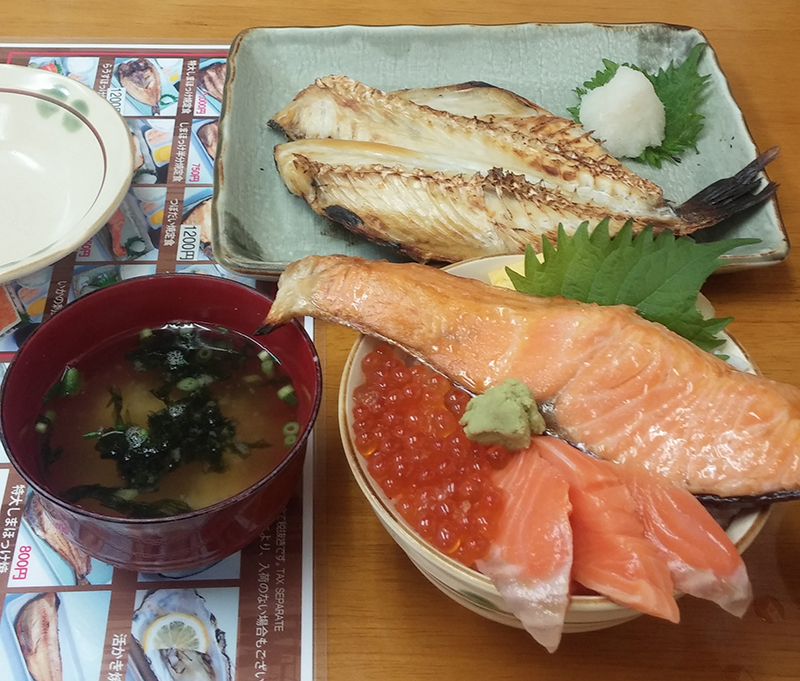 It was a short drive from our Hotel to Otaru Music Box Museum, it only took about 10 minutes. We blocked around the Museum to look for parking space. The nearest one was about 150 meter away, unfortunately the parking fee was exorbitant ‎¥500 for one hour. 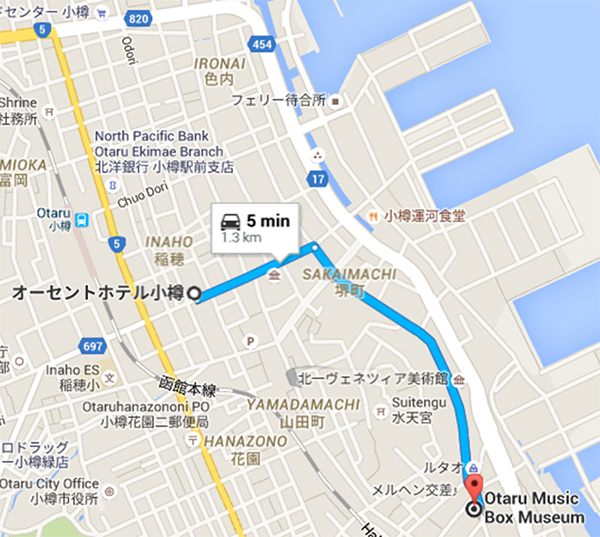 This museum was dedicated to music boxes, it featured a collection of some 3,400 music boxes from all over the world. The museum consisted of five different buildings all located within a 2 minutes walk of each other.

The main building was constructed more than a hundred years ago, it was constructed in 1912 and till today it maintained a grand appearance. It displayed hundreds of different kinds of music boxes, both large and small. In front of the building stands a steam clock that was a present by the city of Vancouver. Entrance to the museum was free and the opening hour in summer was 9 am to 7 pm. 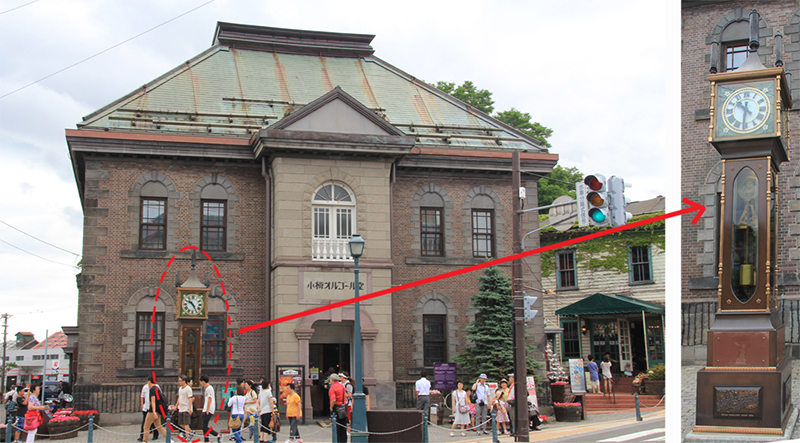 From across the street we could already see the tall steam clock that stood outside the main building of the Museum. When the clock chimed by the half hour we could see steam escaping from the five whistle like tubes at the top of the clock. Walking into the building of the Main Museum was like walking into a big hall with lots of christmas lighting and gifts. 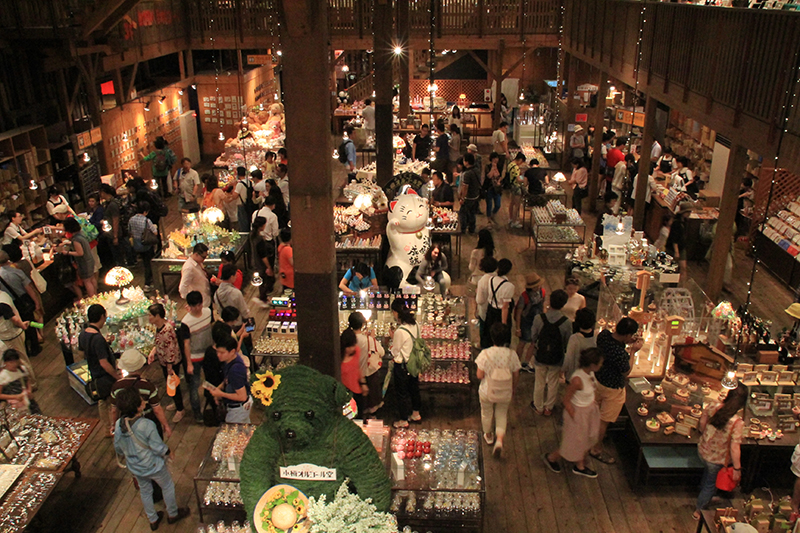 Inside the Main Building

The “museum” was actually a big souvenir shop, there were so many varieties of music boxes for sales, unfortunately the really nice ones were quite expensive.

The whole internal of the “museum” was flooded with golden lights and soft musical tunes given out by the thousands on musical boxes, not noisy at all but very pleasant sounding. I could not resist winding every piece of musical box that caught my fancy. There were three levels so after we explored the ground level we went up to the upper levels, all levels sold almost the same stuffs.

After exiting the main museum building we went to the stuff toy museum which was beside the Main Museum. It was a small place but with big prices for its stuff animals, we walked in and in less than 5 minutes we were out.

Another building called the “Second Museum” was just across the road. It housed antique musical boxes such as antique pianos, antiques organ and antique grand father clocks. I had never seen so many antique pianos in one place. Finally we were in a real museum, but along side of these antique displays were souvenirs, musical boxes for sales, same stuffs again. 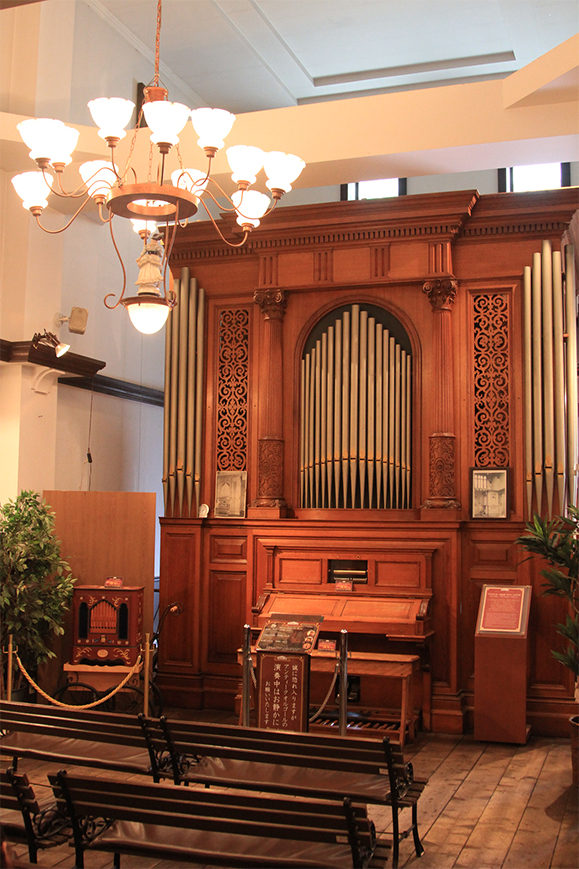 Old Organ in the “Second Museum”

There was a touristy street just across the Music Box Museum. The street was packed with bakeries, cafes and souvenir stores selling all types of products from Japanese chopsticks, handcrafted glassware to cakes etc.

What I liked about this shopping street was that it was not full of tall box-liked modern shopping complexes. The buildings were mainly two or three levels high though many looked old but they were full of characters. 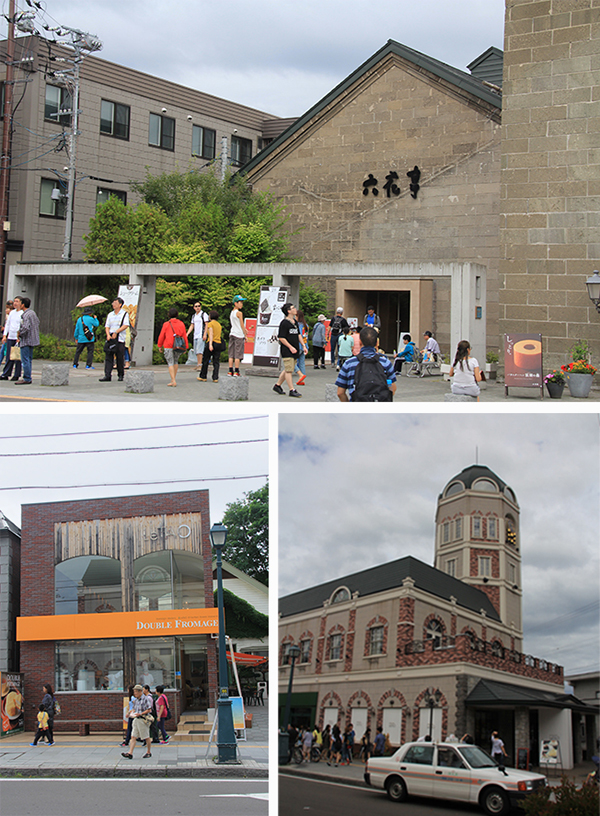 The pavements on both sides of the road were wide, so even when there were many people on the street we could still take our time window shopping as we leisurely strolled by. The feeling that this street gave to me was vibrancy and colorful but not hectic.

Near the end of the street were mainly shops that sold handcraft glassware, and there were many of them. It seemed like there was a glass industry in Otaru.

The glass products were very beautiful but very expensive. There were glass lights, shades, jewelleries, chimes, crockeries etc etc. There was even glass cup that would change color when filled with hot water, so intriguing but again too expensive for us. 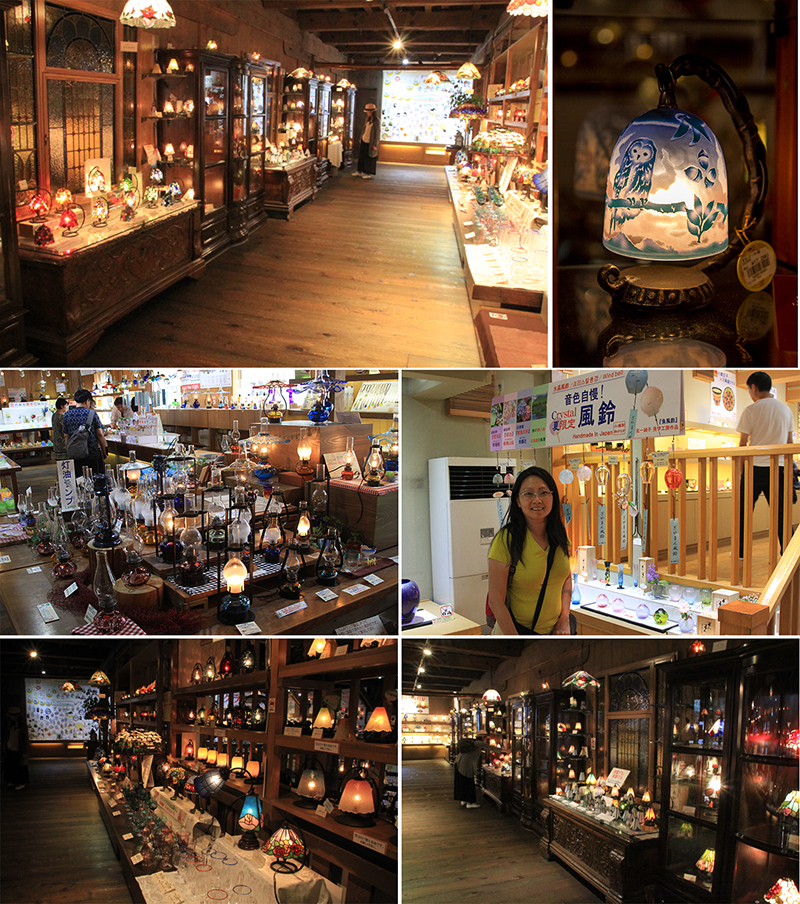 Seeing so many bakeries and cafes along the street made us yearned for some good pastries. But we did not know which shops would be good. So we moved from one cafe to the next assessing their display of pastries but not buying anything yet. There were a few LeTao Cake shops and they were pack with people so we figured their cakes must be good. LeTao here we come!

The store offered a huge variety of pastries, there were all sorts of cakes and biscuits in all sorts of favours. The cheese cakes looked so savoury and delicious, they were definitely the lure that made us decided to have our coffee break in the store. 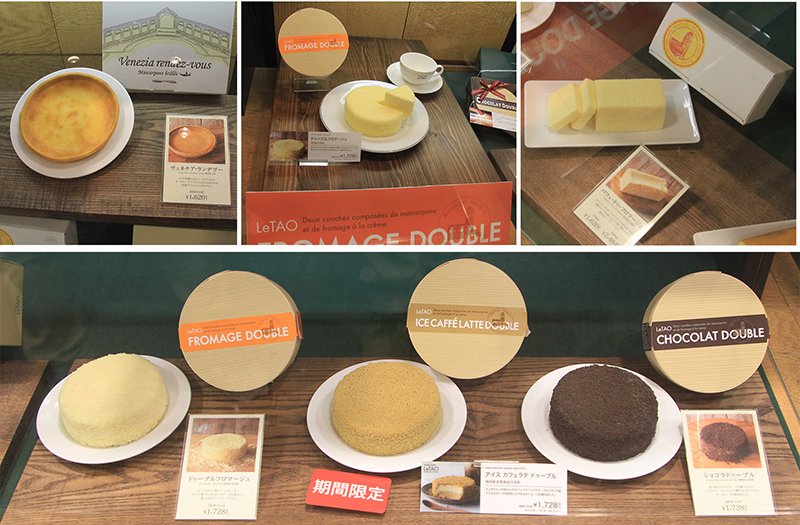 We went up to LeTao cafe on the 2nd level and ordered a cheese cakes specialties set. The set came with three of its more popular cheese cakes and a cup of coffee and cost ‎¥1420. All the three cheese cakes were very yummy, we liked them so much that we wanted to buy some home for our family. 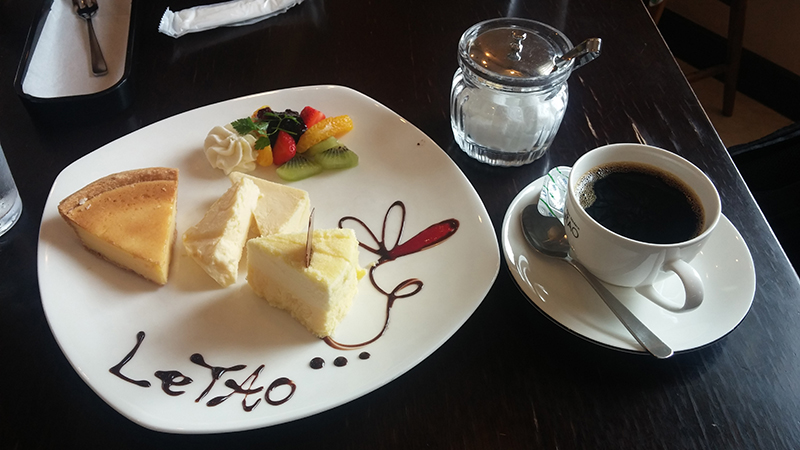 Our tea break at LeTao Cafe

Sadly after reading the packaging instructions of these cakes we realised that they would not be able to withstand the long eight-hour journey home with us. Since we could not buy cheese cake home we bought a few boxes of cheese biscuits original and chocolate favoured.

The purpose of going up Mount Tengu was to see the city view from a high place especially the night view. We decided not to go up Mount Tengku as we felt that the view would be similarly to that we had already seen in Mount Hakodate so we would rather spend evening at the parade.

We were driving to our hotel when we spotted traffic police blocking the road that we would need to turn to get into the carpark of our hotel. Our hotel was at an intersection, it sat at the corner of two perpendicular roads. One of the roads was blocked from traffic to facilitate a parade that had just started.We drove past the intersection and the roads around our hotel several times but could not find a way into the carpark. We had no other option but to drive our car to the Hotel front pouch which was just a drop off point. Fortunately, we were met by a few hotel staff and they offered to take charge of our car and parked it when possible. Great service! We could now move on to the parade.

I felt very lucky, it was such a coincidence that I had chosen a hotel right where the parade would past. In fact the parade starting point was just opposite our hotel. Apparently the parade started from near my hotel and went all the way to the dock (near Otaru canal). I believed it would then looped back to the starting point again, though I was not too sure about that because I did not remember seeing the same group twice. 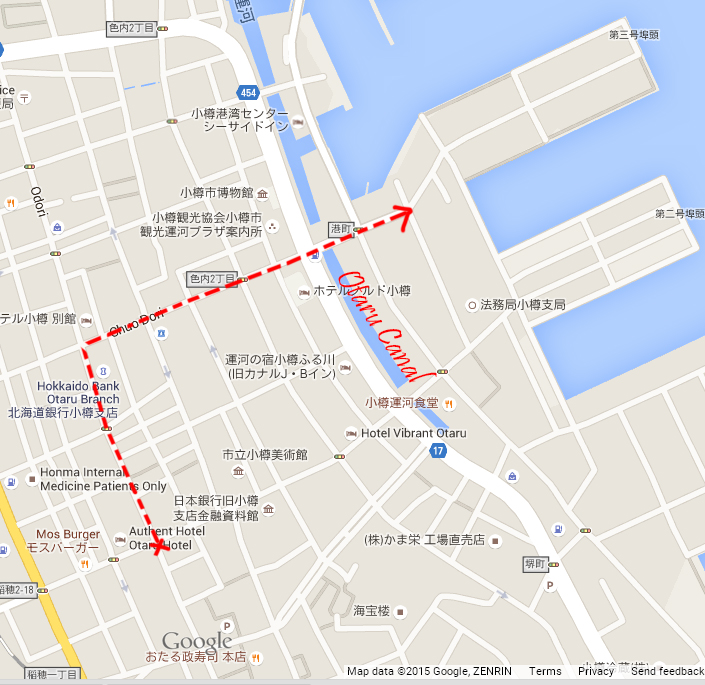 We stationed ourselves on the pavement at about 10 metres down the street from our hotel, there we could see every parading groups that danced by. There were so many different groups taking part in the parade, each group of participants would be dressed similarly mostly in traditional costumes. 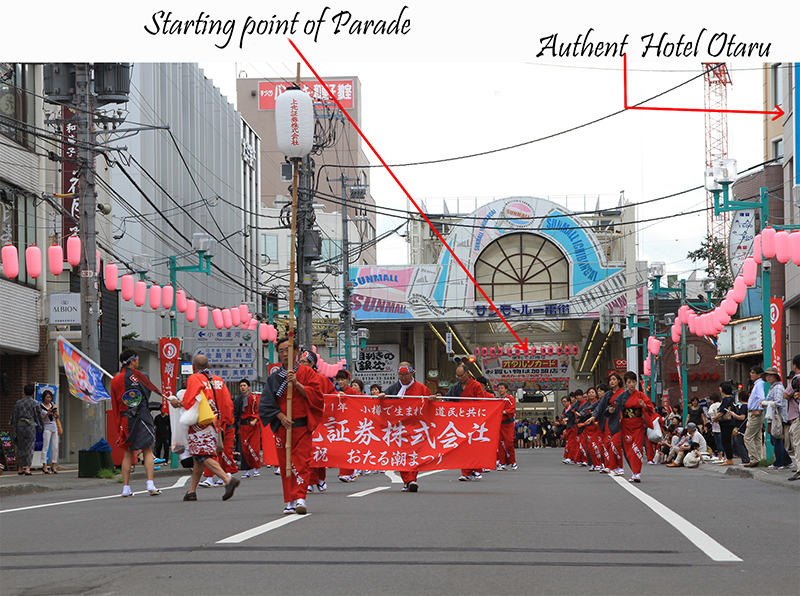 Parade started at the SunMall opposite Authent Hotel Otaru

Along the entire parade route there were loudspeakers mounted on lamp posts broadcasting a traditional folk song. The folk song lasted 2 to 3 minutes and was played over and over again. It was a slow song, very rhythmic and was sung by a middle age sounding male singer.

All the different groups of dancers performed the same dance, probably a well known Japanese folk Dance. Some groups danced very gracefully, probably they had many years of practice. Other groups, especially the younger ones, danced a simpler version. Young and old, women and men all were dancing happily, there was no need to get dance steps perfectly right or perfectly synchronised, it was the joy of mass participation where all came together for a common goal. Being here to witness the celebration reminded of a adjective that described the Japanese people. “Homogenous” society. 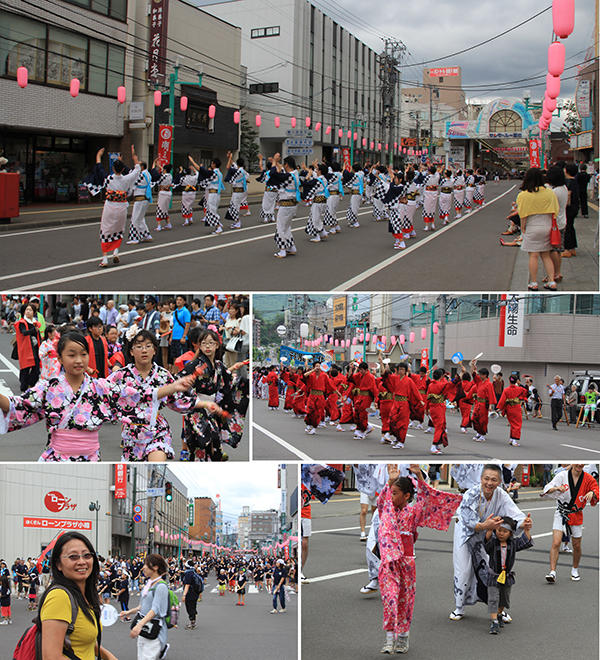 After a whole day out, I was very hungry and since it would be my last dinner in Japan I wanted to eat ramen again. So I whipped up my handphone to search for a good ramen stores nearby. There seemed to be one nearby so based on the location that was stated on the webpage we walked towards the place which was near the start of the Otaru Canal. 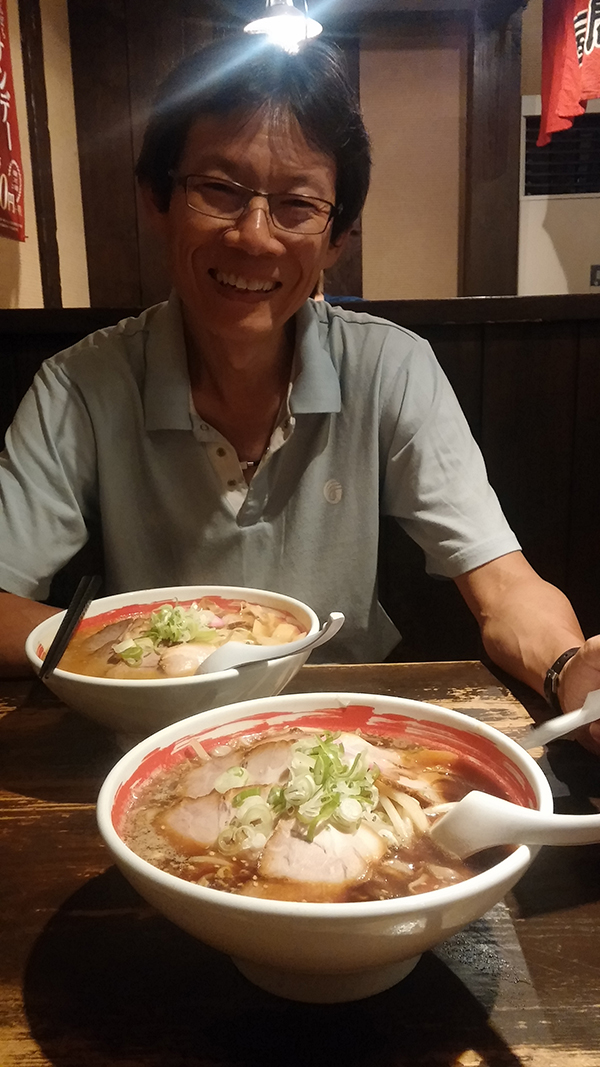 Sadly we could not find the store so we just walked into the first ramen store that we came upon. Well it turned out that the ramen served at this store was very good. I had soy sauce based soup and Yat Thong had his in miso based soup. Yummy Yummy.

The ramen just simply tasted better than those that we ate back home. The soup was good, the pork slices were many and thick and the noodles tasted so smooth.

After dinner we walked back to the dock to take a last look at the parade which was still going strong. We were very surprised that many of the groups had created a new twist to their dance routine. One group had incorporated lanterns in their dance, another used long scarves and another used bells. 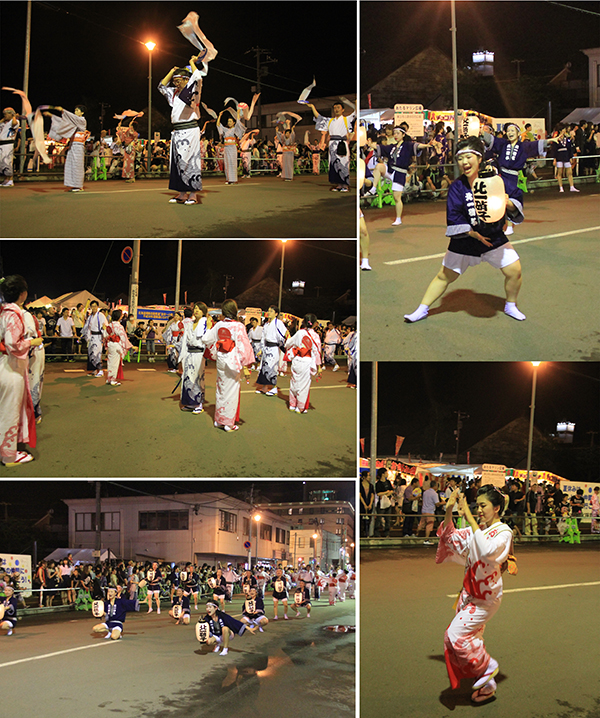 The Parade lasted till the night

The parade ended with a fantastic drum performance. The drummers came in beautifully decorated trucks. The first truck carried a huge group of young girl drummers playing on small drums. Then came the older girls with bigger drums. Next a number of male drummers carted in a set of three drums, they drummed energetically with all their might. Each vying for their turn at the drums, each hitting the drums faster than the other. Finally a old man probably the master came and joined in the fun. He drumming technique was superb, his strokes were fast and furious and he went on and on without taking a breath. 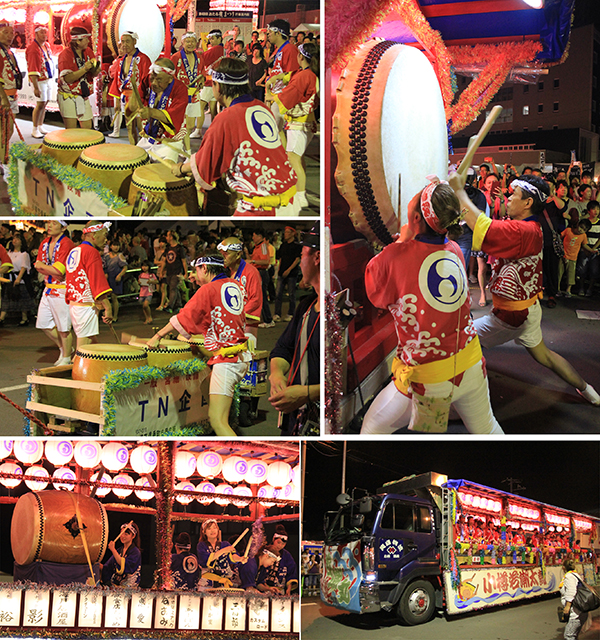 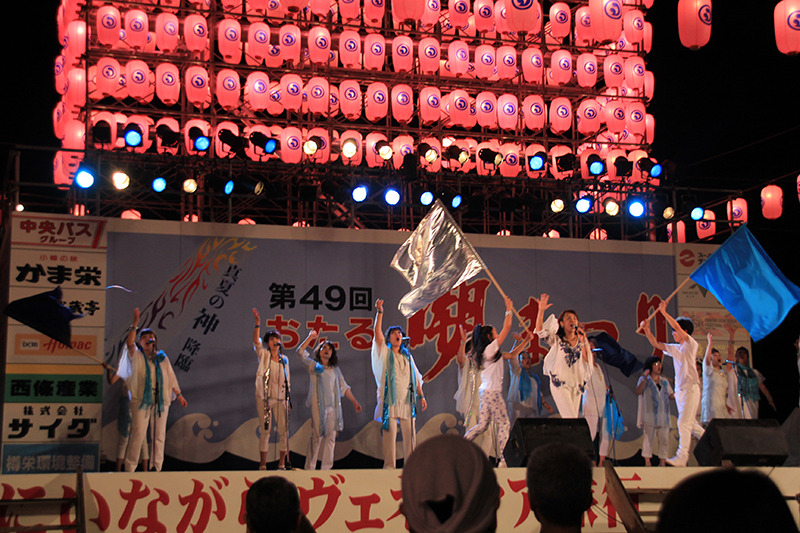