Today we had two destinations. The first was Nachi Fall & Nachi Taisha, the second was a repeat of senmaida sunset viewing. For this second sunset viewing we decided to trek up to the high-view-point. Our hotel accommodation for the night would be at Business Hotel Kawakami (ビジネスホテル河上). 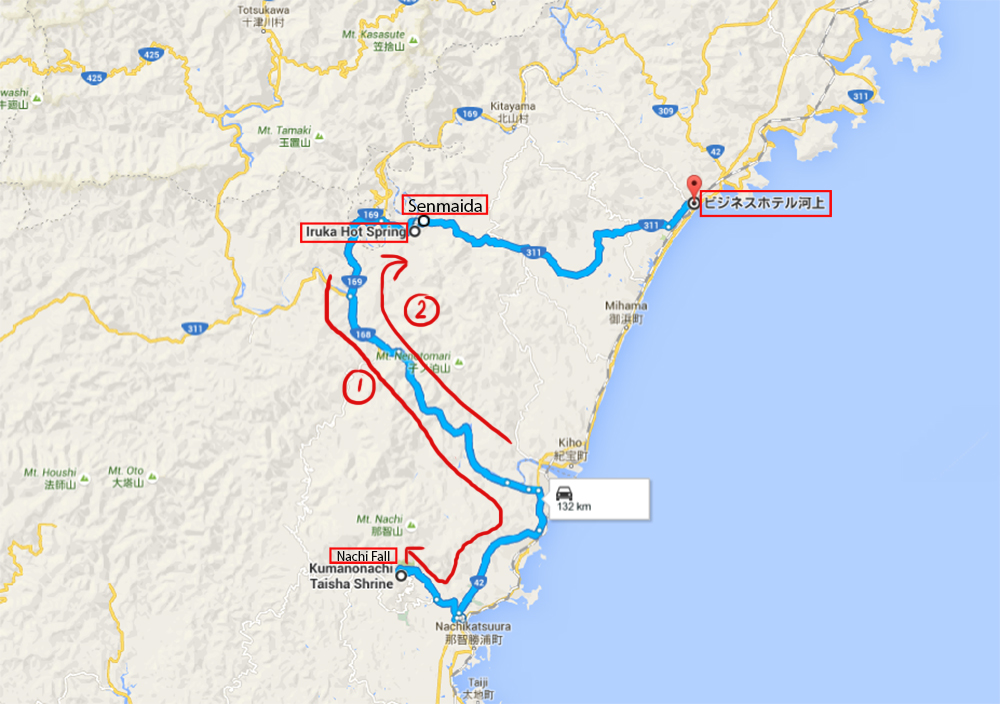 Nachi fall was very beautiful especially when seen together with Seiganto-ji pagoda. As for our second sunset at senmaida the high-view-point provided the best view of the paddy terrace. The trekking up hill to the high-view-point was well worth the effort.

I was eagerly looking forward to our breakfast after having a wonderful dinner the night before. In the breakfast room, we sat at a table where my name tag was placed and very soon the waitress bought out our food and laid them prettily on the table. Breakfast was nice and delicious. I enjoyed the fish very much and ate every items that were placed on the table. 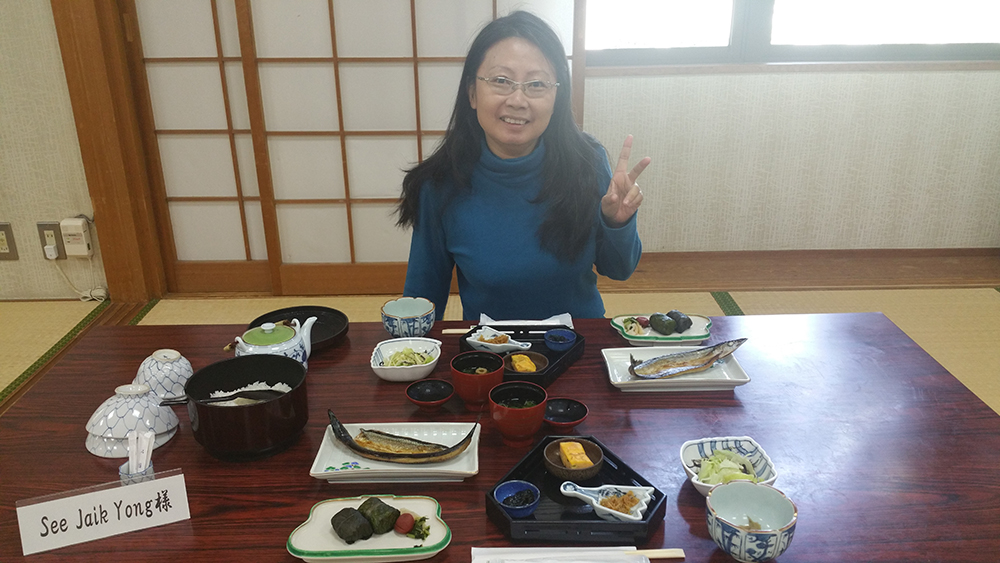 From our hotel we drove for about an hour covering 54 km to reach the Kumano Nachi Taisha. This taisha was one of the three famous Great Shrines of Kumano. The other two were Kumano Hongu Taisha and Kumano Hayatama Taisha. To visit all three in one day would be a “Taisha overload” so we decided to pick one only. Of the three, I thought Nachi Taisha would be most unique as it had a spectacular waterfall, Nachi fall, nearby. 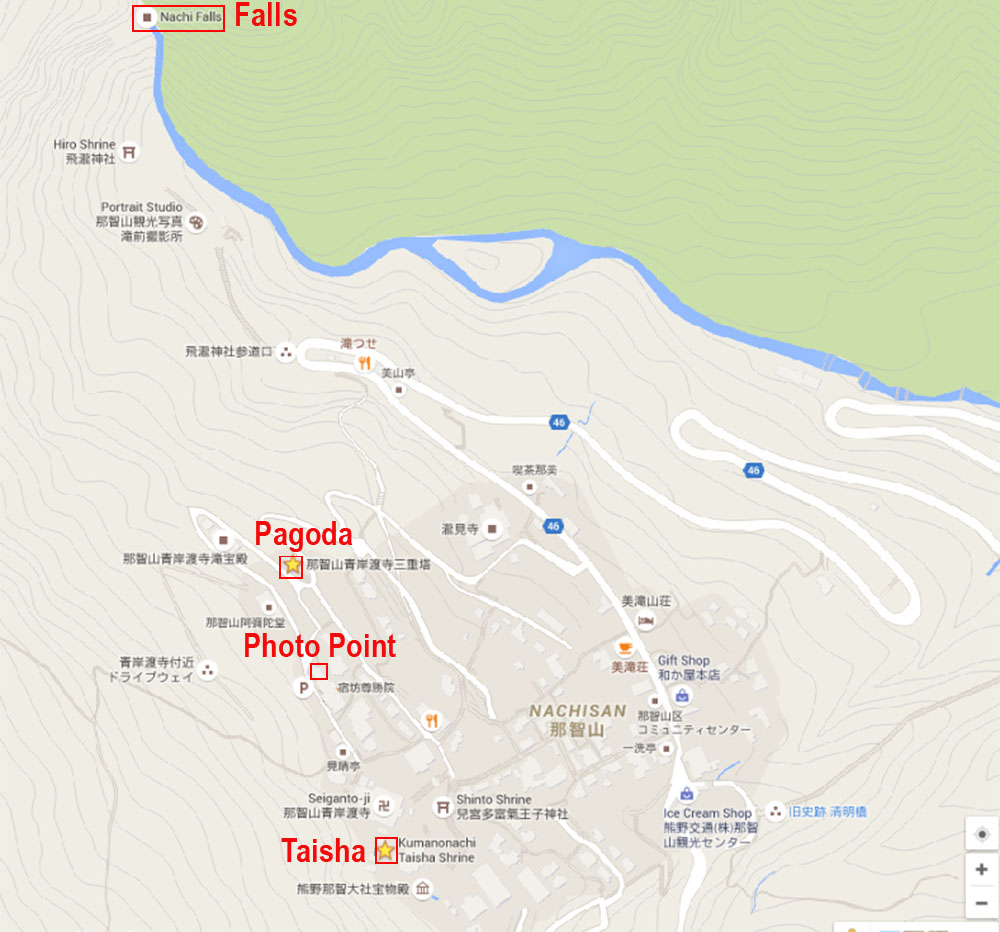 My mapcode was mapped to the only car park  that I could see on the google map.  To reach the car park we had to drive up a winding road. Midway up the road,  we were stopped by a staff who collected ¥500 from us before allowing our car to drive through. I was not sure what was the charge for, car park charge or entrance fee?

We did not drive all the way up to the car park shown on the google map.  Instead we parked at mid level at a car park that was practically next to a three-layer-roof Pagoda. It was the pagoda of  Seganto-ji  (那智山青岸渡寺). 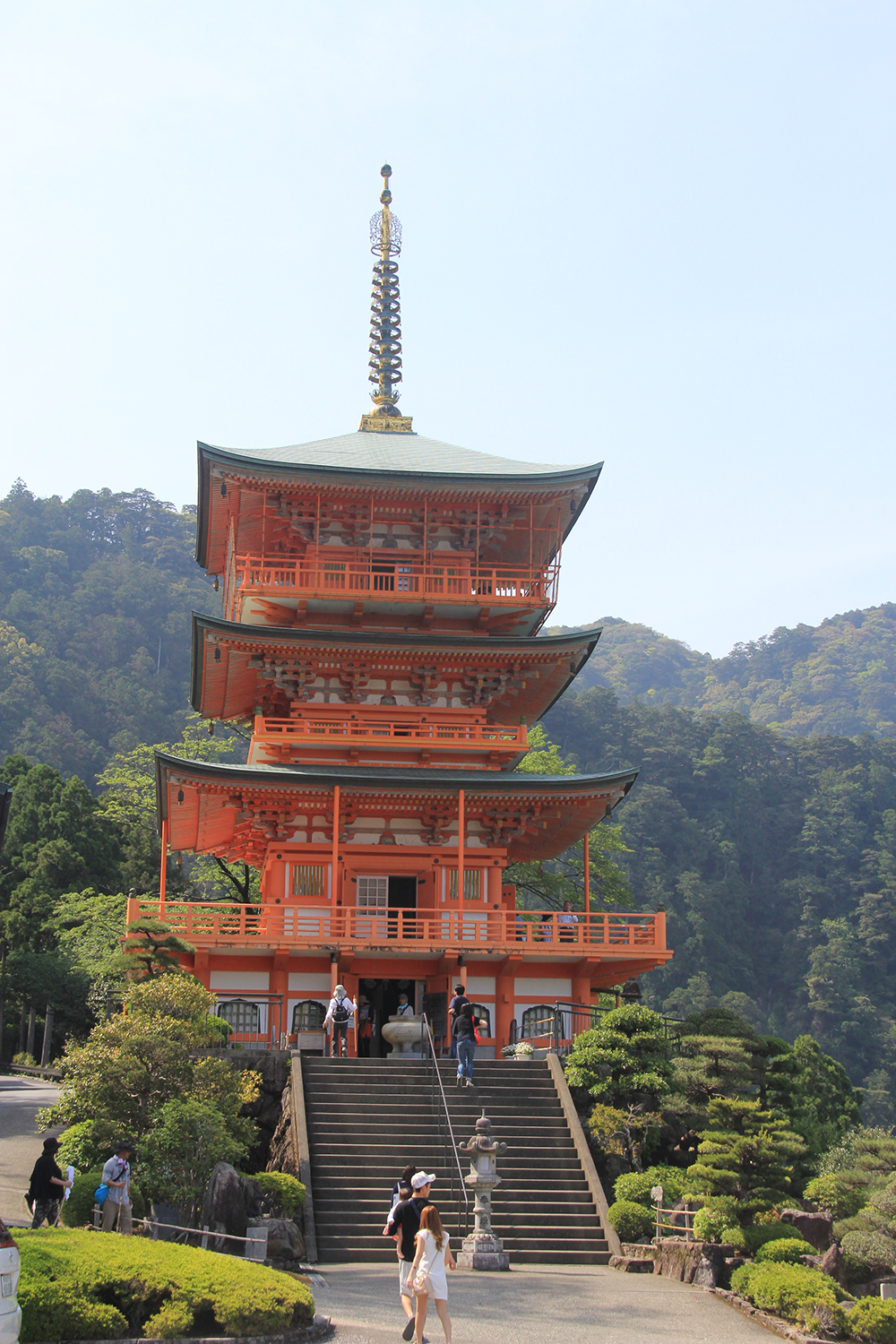 From the car park there were many stairs, some leading uphill some downhill. We took the steps that led up to Nachi Taisha and Seganto-ji. On the higher ground we could see Nachi Fall from afar. We went in search of a good spot to take a photo of the Pagoda and Nachi waterfall in the same picture frame. We explored many places and finally found a good photo spot. At this location the view of the pagoda and the waterfall was magnificent. 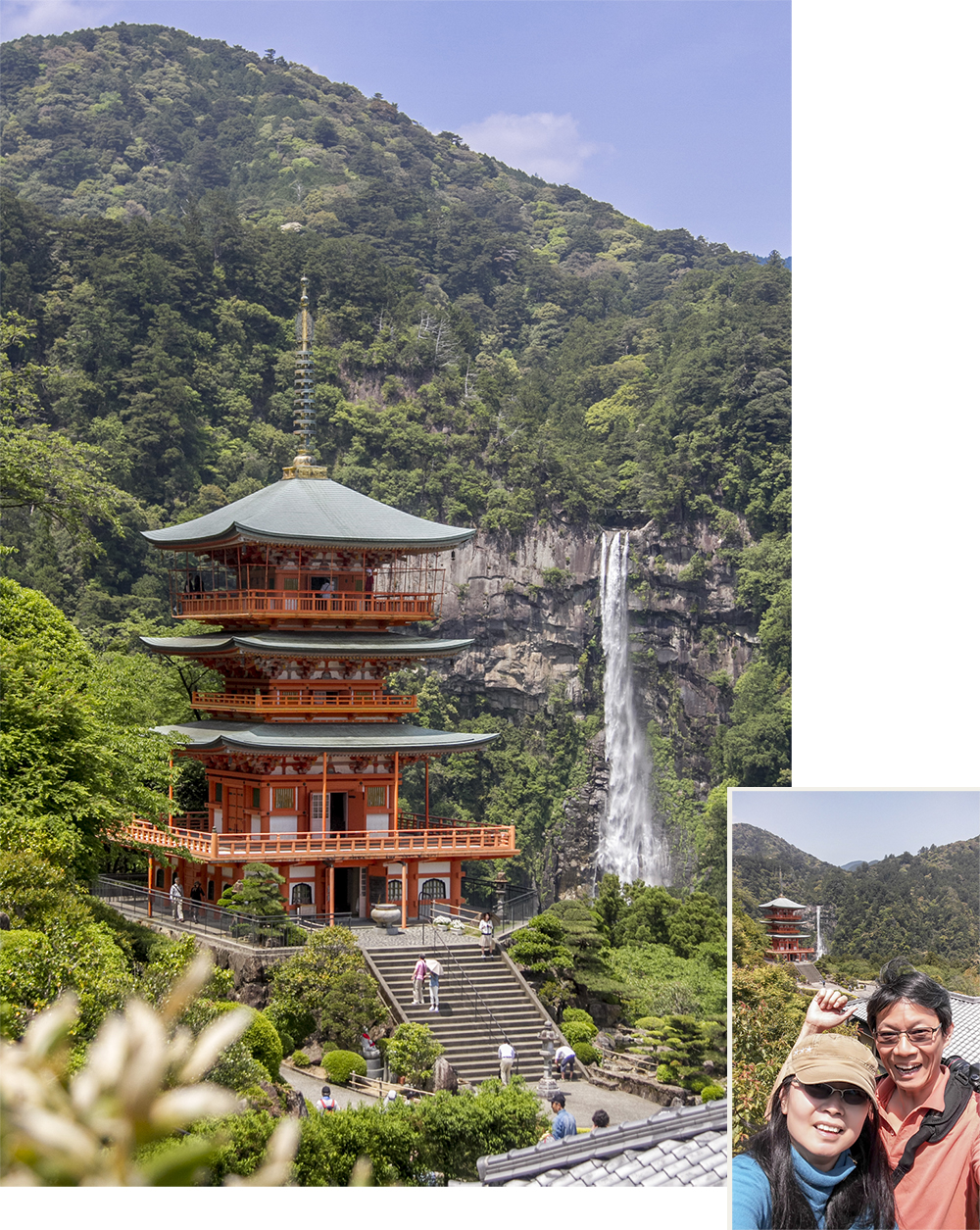 We went back to the Pagoda to pick up our car. We were debating if we should drive to Nachi Falls (but we were not sure if there was a road leading to the fall),  or we should take the walking trail that cut through the slope. Though the distance from the Pagoda to the Nachi Fall was not very far unfortunately the slope was very steep and the steps were high/deep. It was close to noon and the weather did not lighten the strenuous walk. 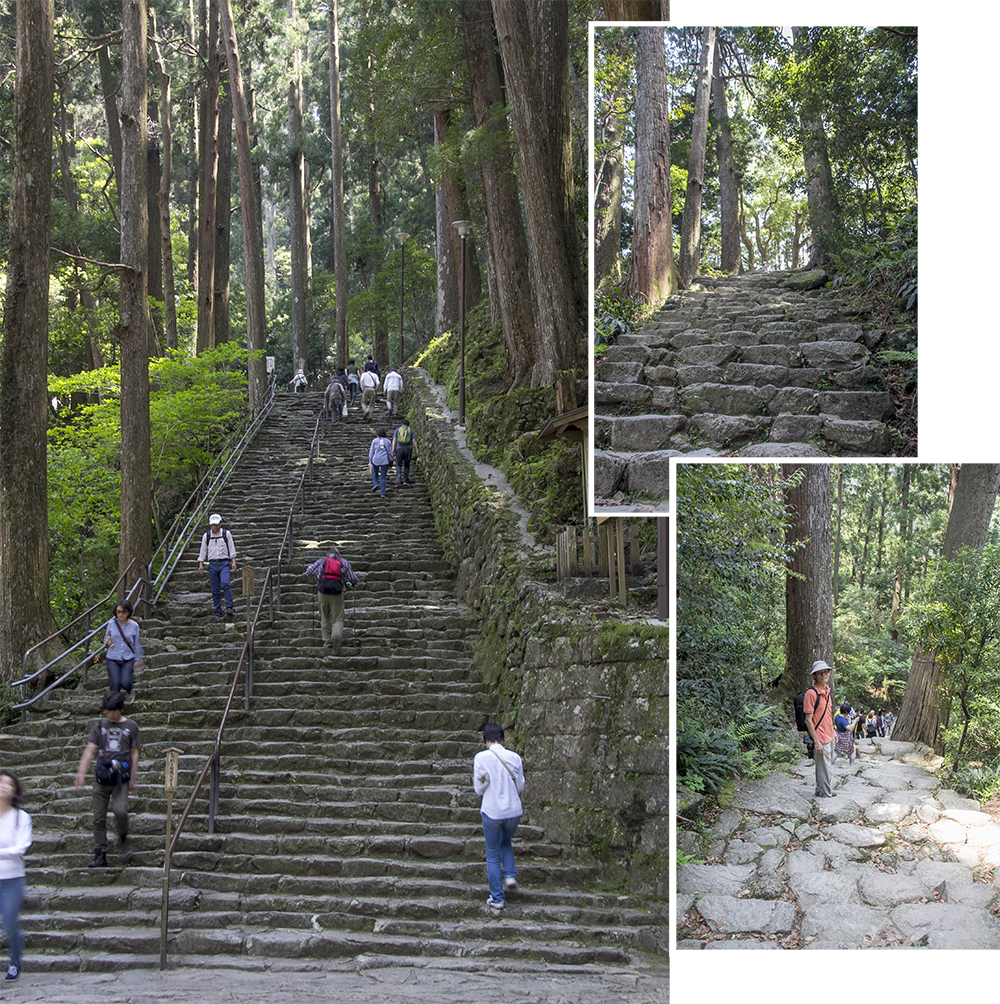 The trail crossed the winding road at several points.  At the third which was also the last crossing there was a row of shops and a car park. How I wished we had driven our car down to this car park, that would had cut our walking distance by half. I was too hot and tired to proceed so we stopped for an ice-cream.

We took a 30 minutes break eating ice cream and drinking coffee before taking the last long stairs down to Nachi Fall. Nachi Falls, Seiganto-Ji, the pagoda, Nachi Taisha, in fact the whole region was a UNESCO World Heritage Site. 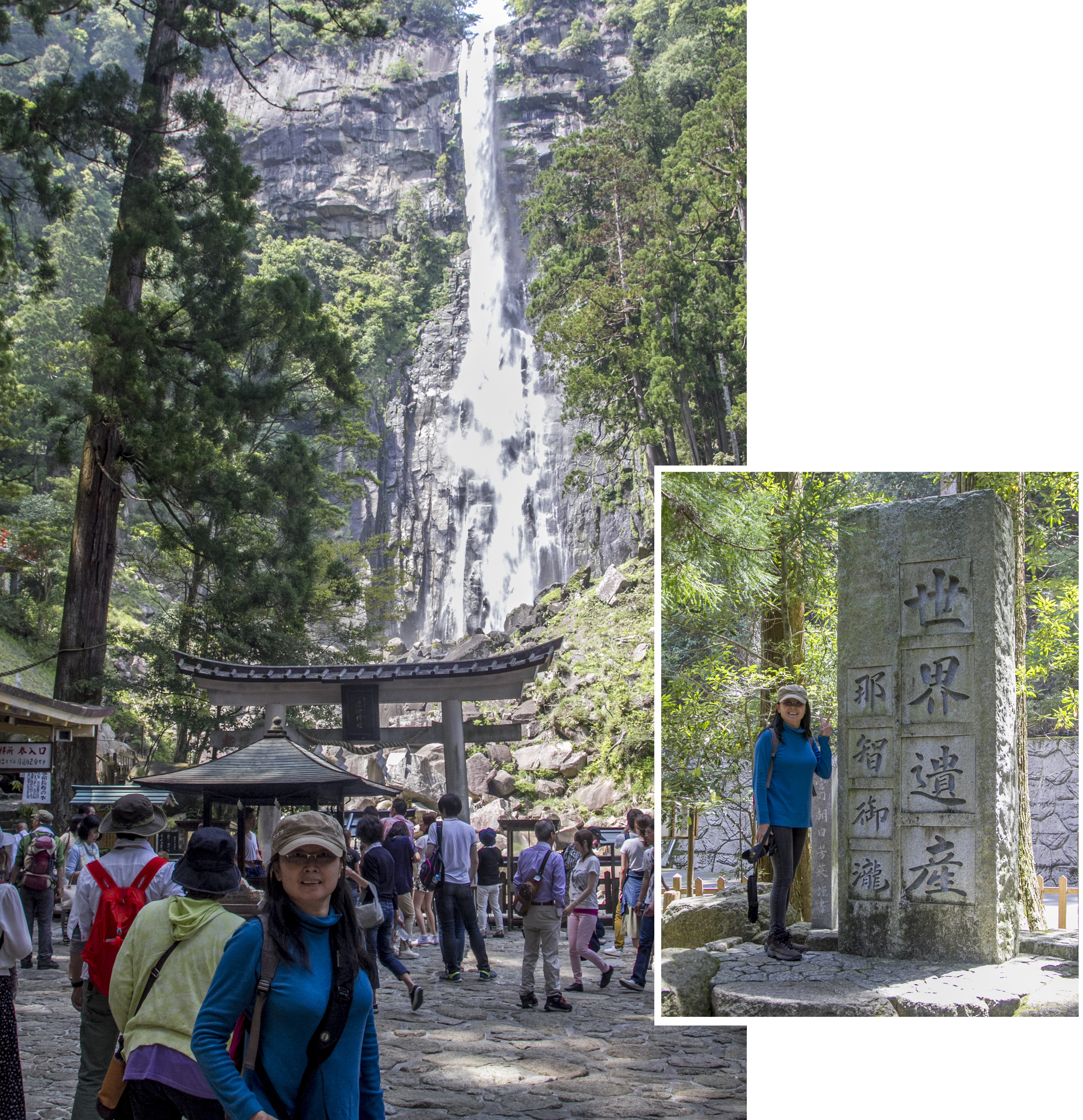 Finally we reached the fall, it was very high. I read somewhere that Nachi waterfall was the highest waterfall in Japan, standing at 133 metres. At the base of the fall there was a torii gate and some sort of a ticketing booth at the entrance to a set of stairs going up. We bought two admission tickets at  ¥300 per ticket to proceed nearer to the fall. We were not sure if by going nearer the view would be better since the admission tickets were not too expensive we decided to move on to the upper deck.

The upper deck was a vermilion colored deck. It was not as close to the waterfall as we expected. Standing on the deck we still could not see the end point of the waterfall which we thought should be a pool, unfortunately the view of the “pool” was blocked by high rocks. 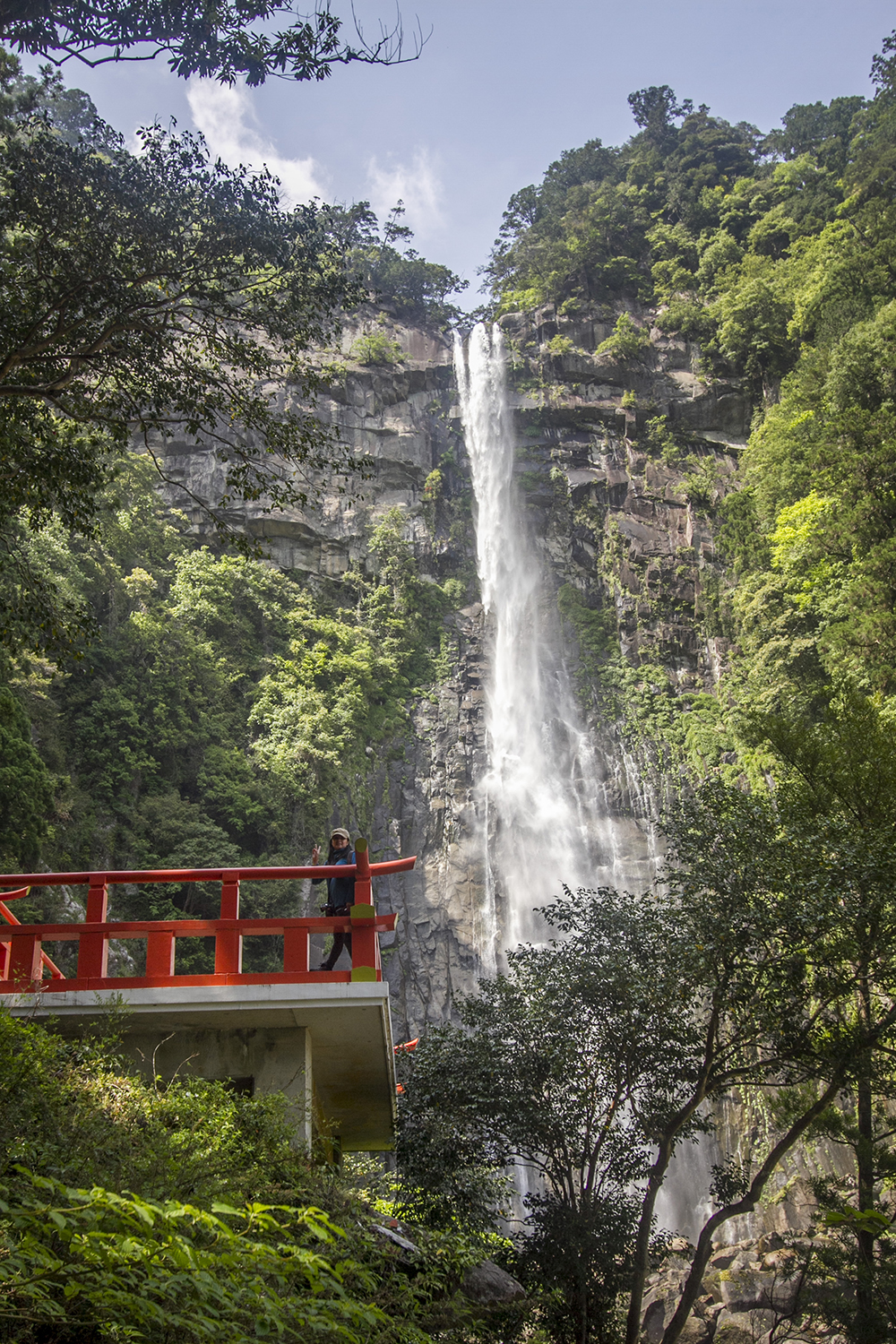 Comparing both views, one at the upper deck and one before the ticketing booth they were both about the same. So not coming up to the upper deck was no lost.

At 3 pm we finally returned to our car after a long and strenuous up hill walk.

We parked our car near the bend where the road was slightly wider. There was already another car parked at the same location. From my research it would take about 15 minutes of trekking to reach the high viewing deck. We walked and walked and after 15 minutes the viewing deck was still nowhere to be seen. The walking trail was just a dirt track going up hill, with some steps at certain areas. All around us were tall trees and sometimes our path were blocked by fallen trees and rocks. Luckily though the place looked abandon the path was very obvious, so there was no likelihood that we could via off course. Along the way there was one or two signboards pointing forward to a view deck. The only problem was we did not know how much further we had to go.  At the 20th minutes we reached a “T” junction and we took the left turn. Then after another 15 minutes we finally reached the viewing deck!

The viewing deck was a narrow strip of land cut into the side of the mountain, there were already more than 10 people at the deck. Several of them were seasoned photographers with huge zoom lens and cameras set on heavy tripods. We politely squeezed our ways in between the heavy tripods and setup our smaller cameras on less heavy duty tripods.

I definitely felt that the scene seen from this high viewing deck was better than those seen at the lower view points. Its view was much wider and we could see many more paddies fields. As the sun set, its rays changed the scene in front of us. It was golden and green, then golden  and orange then golden and red before turning dark dusky blue. 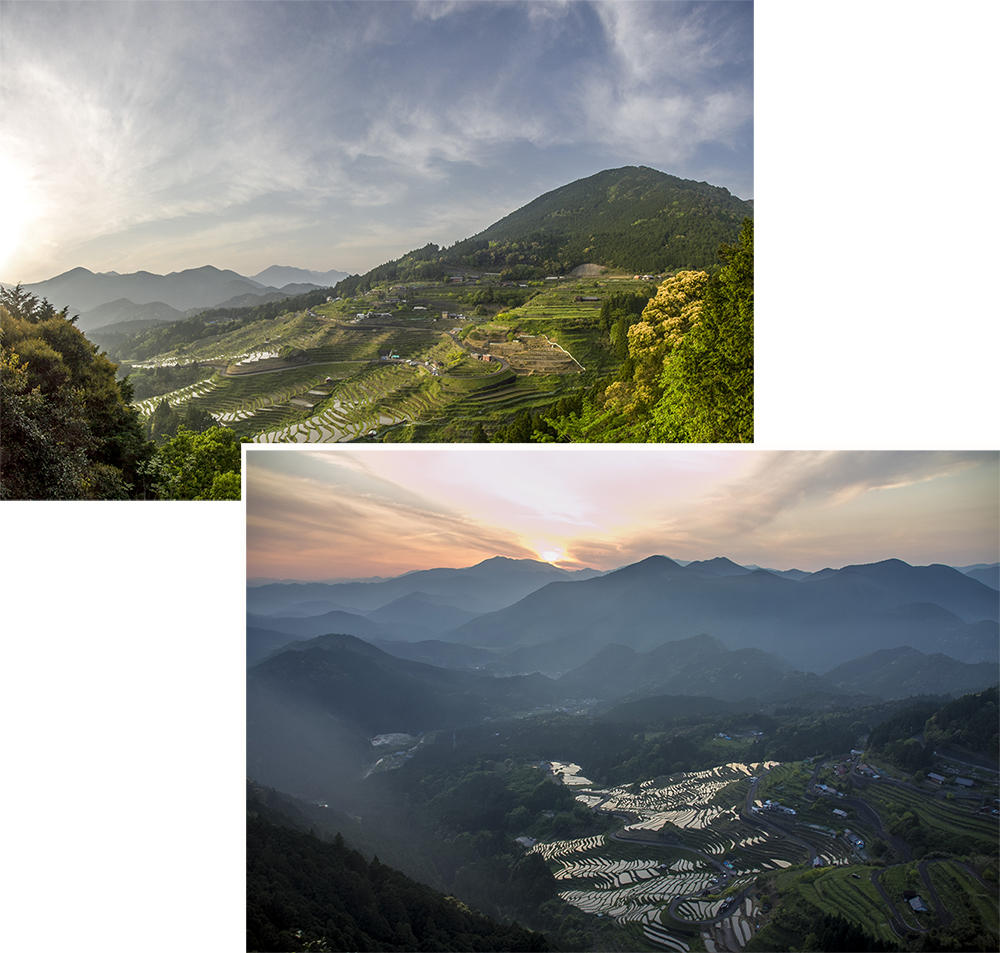 After the sun set, half the people at the deck left. The rest of us stayed behind to take more photos. The reflection of the water from the paddy fields looked like blue mirrors as they reflected the dusky blue sky. Periodically a car would drive through the village leaving a light trail in our photo. 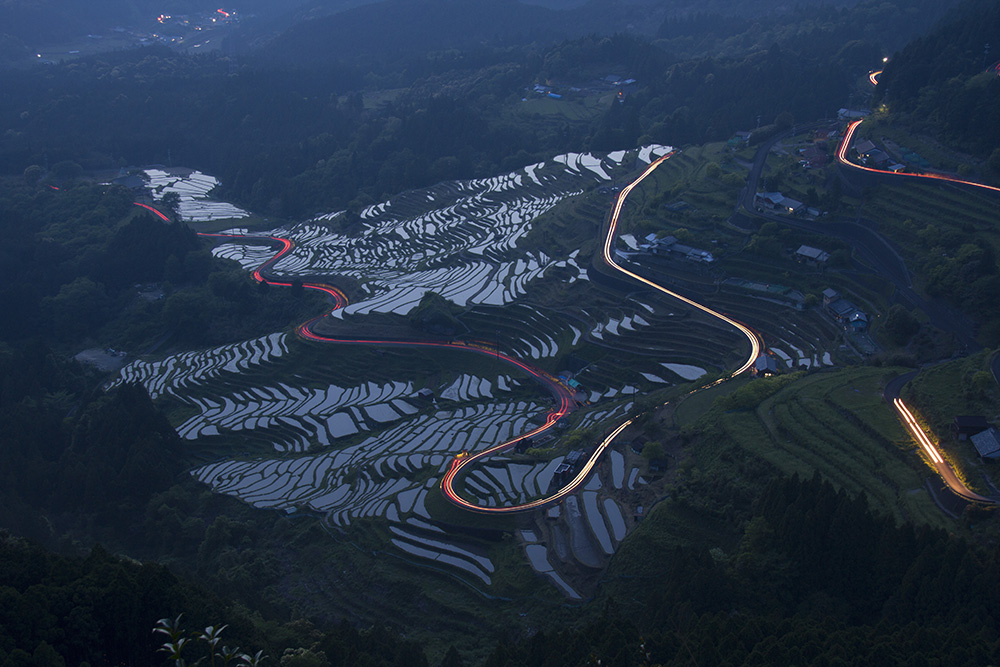 View at Maruyama Senmaida after sunset

By about 7.30 pm we decided to leave the viewing deck. We would have loved to stay longer but thinking of the very dark walk ahead of us we felt it would be safer to leave earlier than later. It was indeed very dark and we had to switch on the “torch light” apps on our phones to shine the path ahead. There was no light along the path and the tall trees covered out all the moonlight, I was not even sure if there was a moon in the sky.

When we reached the T junction we saw a huge dark shadow of a man standing at the junction. We recognised him as one of the Japanese from the viewing deck that had left earlier. Apparently he was not sure which path to take at the T-junction. In a few words we beckoned him to come with us as we led the way.

My husband walked in front of me and Japanese man followed behind me. I could hear him stumbling and tripping heavily and I was in constant fear that he would slam into me from behind. He was carrying a heavy backpack and two long walking sticks, one in each hand so that did not left him a free hand to hold a torchlight. He hung his torchlight on a string looped around his neck and as he stumbled the touch light shone everywhere instead of the rocky path in front of him. And since he could not see where he was walking he just go on stumbling and tripping!

After about 20 minutes we were back on the road safely and bade farewell to our Japanese “friend”.

Our hotel for the night, Business Hotel Kawakami was about 23 km from Senmaida. It was not easy booking hotels around this region. Most of the hotels were not listed on the standard hotel booking websites like Booking.com, Hotels.com or even Japanican or Rakuten. I had to find the hotels on google map then get their websites and placed my booking directly through these websites using my google translated Japanese.

I originally had a room for two at a local B&B called 民宿風帆, I booked the place because it boasted about its meals. Unfortunately after confirming my booking they kept asking me if I spoke Japanese and when I said no, they unilaterally cancelled my reservation. When I explained to them that we could still communicate via google translation they told me that the owners would be too busy to “handle” us. What a shame!

We checked into Business Hotel Kawakami easily even though the receptionist could not speak or understand  a word of English. She held a big card that gave us all the necessary information in English, it told us the check out time, the breakfast room location, etc etc. 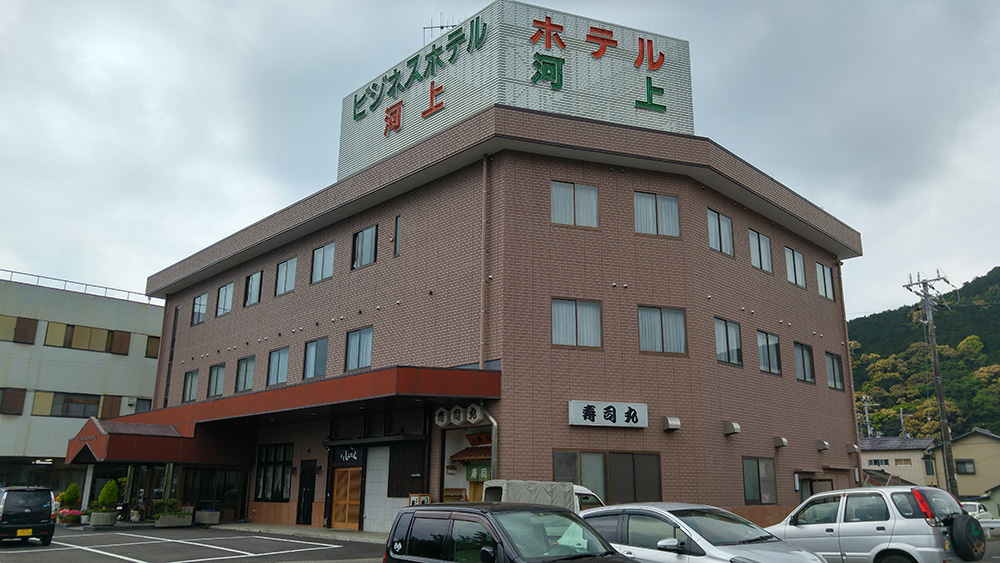 Our room was a double room with attached bathroom. The cost of the room was  ¥9000 and breakfast was additional ¥800 per person. Parking for the car was free. 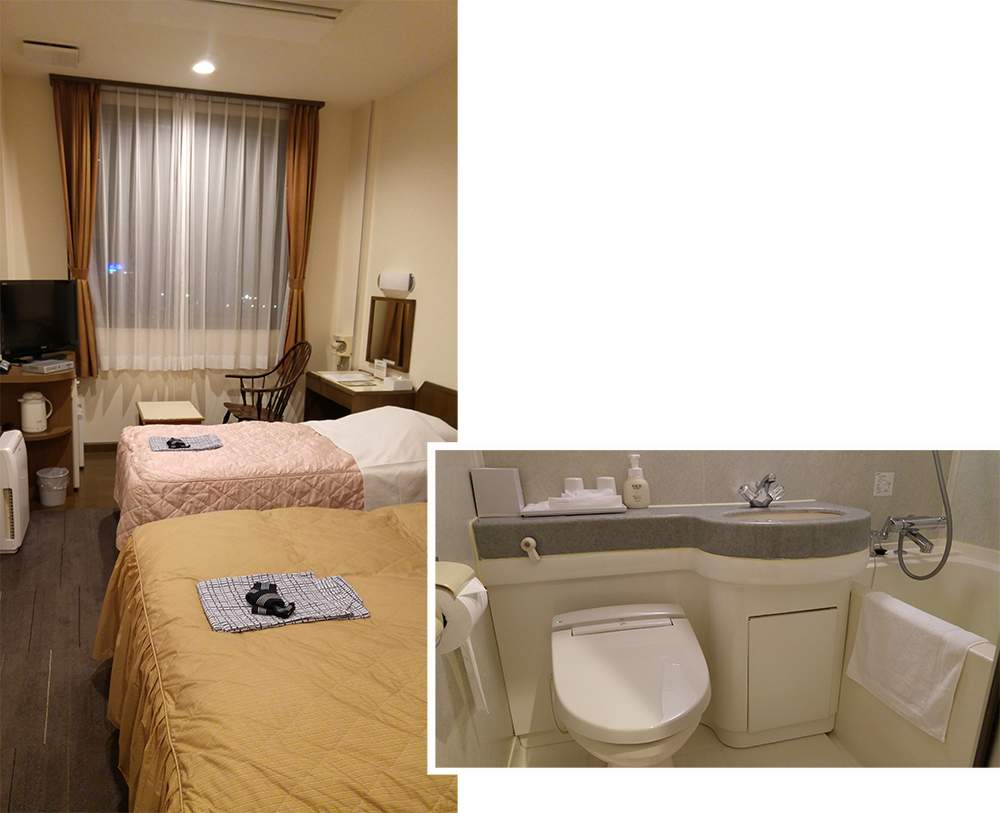