In the morning we planned to drive to Ogizawa Station to start our Tateyama Kurobe Alpine Route. We would not traverse the entire route but to go as far as the snow corridor and then return. We gave ourselves until late afternoon before we would have to leave Ogizawa for Takasaki where we had booked a room for the night.

Route for the day (Toll charges ¥3650 to Takasaki)

We were in Ogizawa station by 8.10 am and by the time we left Ogizawa again it was about 5 pm we had spent close to 9 hours going up the snow corridor and coming down. It was a good thing that we gave ourselves plentiful of time and it had made our experience more fun and relaxing. At each stop we had the time to walk and explore.

We had an early breakfast as we wanted to move off early. Breakfast was nice, definitely better than those “free breakfast” that we had at Hotel Toyoko Inn. The breakfast was more of a western breakfast than Japanese. 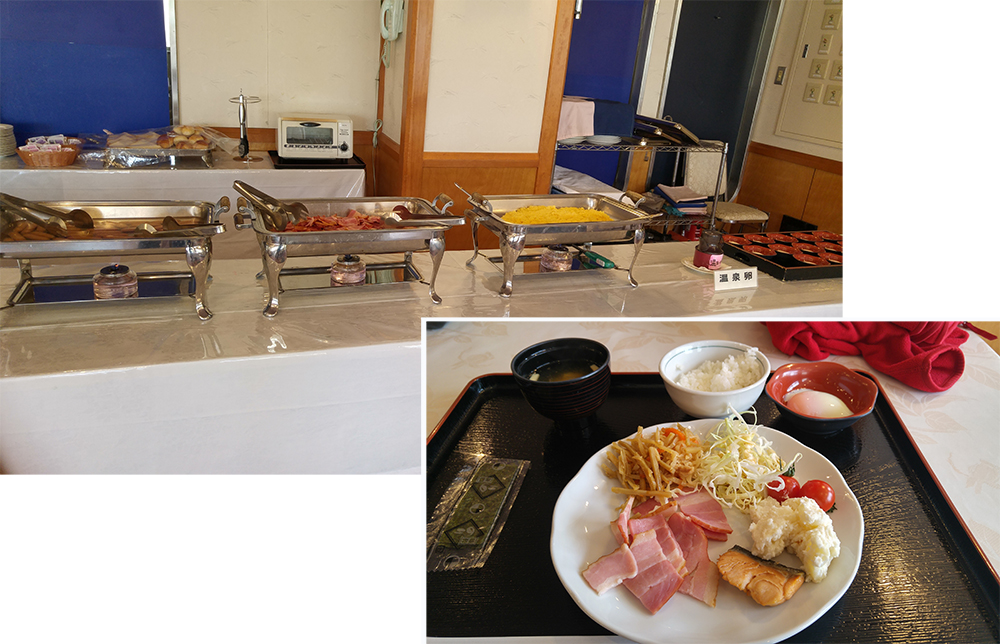 We had chosen to stay at Omachi because it was the closest town to Ogizawa station where we would start our journey on the Tateyama Kurobe Alpine Route. The distance between Omachi town and Ogizawa station was no more than 12 km, which meant that if we were to have an early breakfast we should be able to reach Ogizawa by 8 am in the morning.

Tateyama Kurobe Alpine Route crossed two mountains, Mt Akazawadake and Mt Tateyama, starting from Ogizawa station ending at Tateyama Station or the other way round. Before this route was opened in June 1971, Mt Tateyama was inaccessible to visitors.

Every year the Alpine Route was opened from 16 April to 30 November and was only accessible by designated public transports. The entire route was divided into seven sections, six of the sections were served by public transports and one section was crossed on foot. Private cars were not allowed on these seven sections. 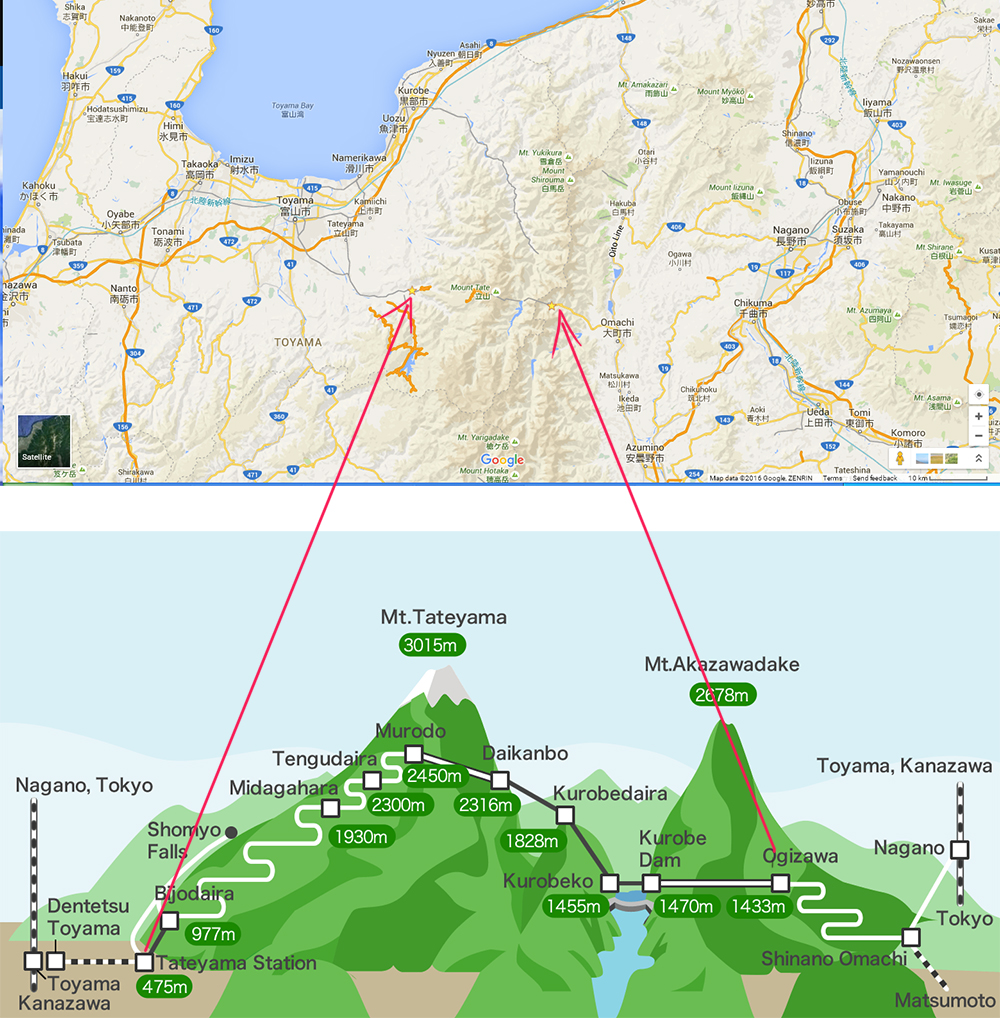 We would have to park our car at either Ogizawa station or Tateyama Station to start our journey on the Alpine route.  If we were to traverse the entire route we would still have to return for our car on the other end. We could do the return journey via the same way by crossing the two snow mountains again, or take a longer round about way by train. All this would take too much time. Another way would be to engage a car transfer service (very costly) to drive our car to the other end of the route.

After much thinking we decided not to traverse the entire Tateyama Kurobe Alphine route but to do only the important sections. The main highlights of the route for this time of the season were the high snow corridor and Kurobe dam. We could start at Ogizawa station and go as far as the snow corridor and then return or start at Tateyama station and go as far as the Kurobe dam before turning back.

We decided to start at Ogizawa station as it fitted better with our driving route this trip. 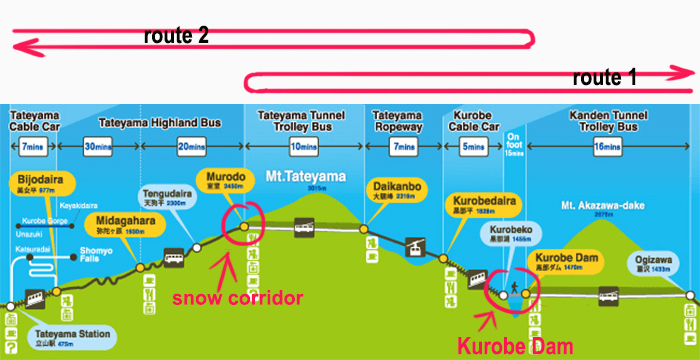 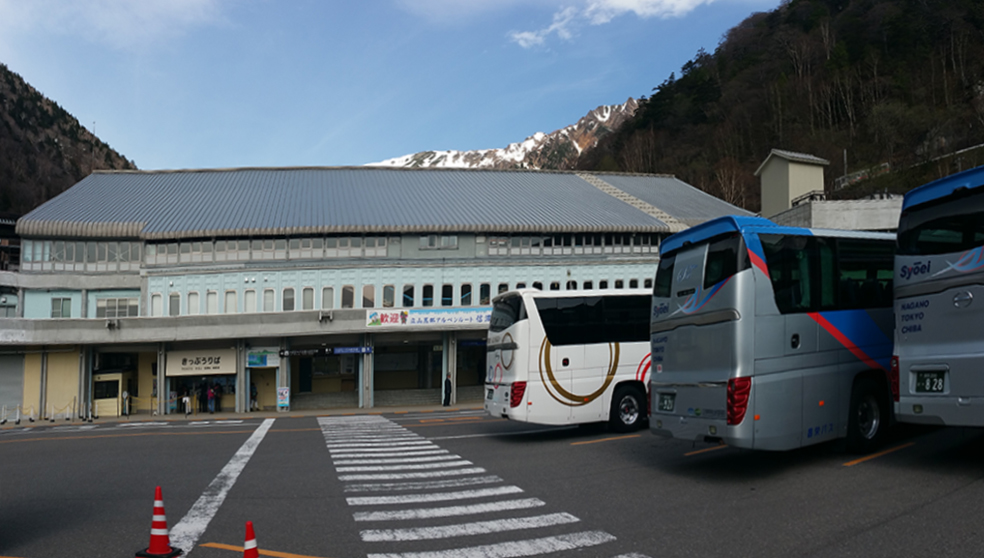 The buses drove on a short section of the road before reaching a tunnel (Kanden Tunnel). This 6.1 km tunnel cut through the base of Mt Akazawadake sloping gently up an elevation of 37 m. After about 16 min we arrived at the end of the tunnel. We left the bus and walked out of the tunnel to Kurobe Dam.

Kurobe Dam was huge!  It was Japan’s largest arch dam completed in 1963. Just after the tunnel there was a set of steps leading up to an observation deck. The stairs went up a long way and it took us 15 minutes to reach the top. At the deck we got a panorama view of Kurobe Lake and the whole surrounding area.

View from the observation deck of Kurobe Dam

After we came down from the observation deck we walked across the dam and came to a rectangular tunnel at the end. This was the entrance to Kurobeko Station.

At Kurobeko Station we rode an underground cable car to Kurobedaira station. It was a very short journey of 800 metres and going up an elevation of 373 metres.

This was the first time I sat in an underground cable car. The whole 800 metres journey were completed in an inclined tunnel. The same tunnel was used for the cable car going up and another cable car going down. It started with only one track but somewhere in the middle of the tunnel the single track branched into two  tracks so that two cable cars travelling in opposite direction could pass by each other. 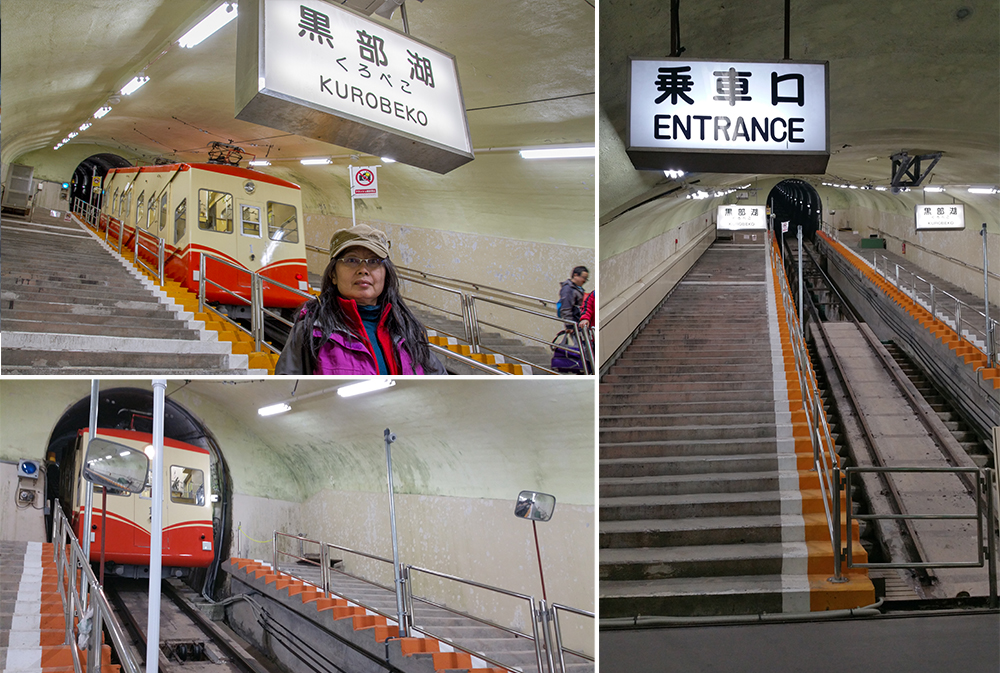 The interior of the underground cable car looked like a huge staircase with steep steps. As we were travelling in a tunnel there was no scenery. The only excitement was when the cable car travelling in the opposite direction passed us.

I guessed it was called a cable car because the car was pulled by cable suspended on the roof of the tunnel. 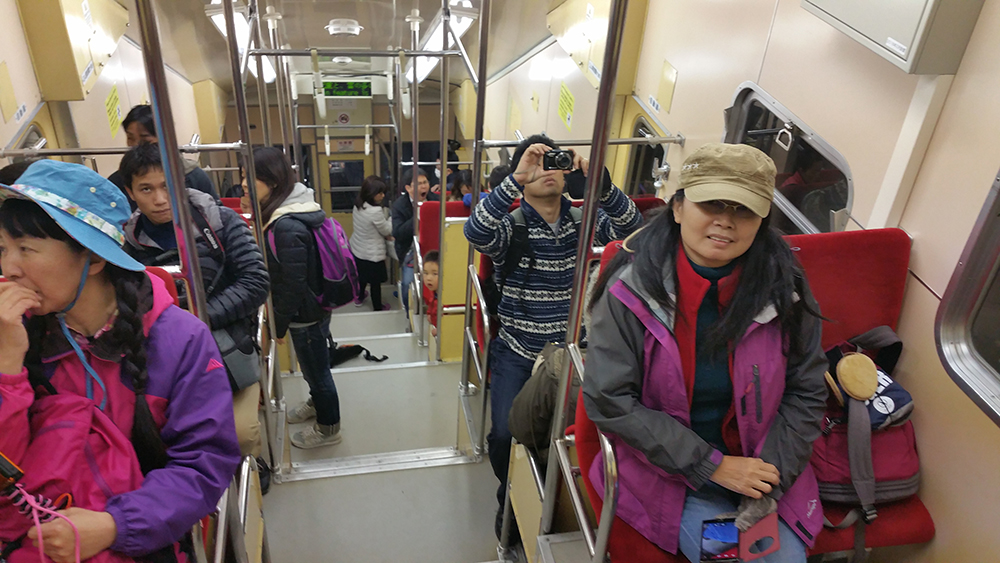 At Kurobedaira station we transferred to an “open air” cable car, Tateyama Ropeway. In Japan cable car was called ropeway.  Finally we got to see some wonderful view. 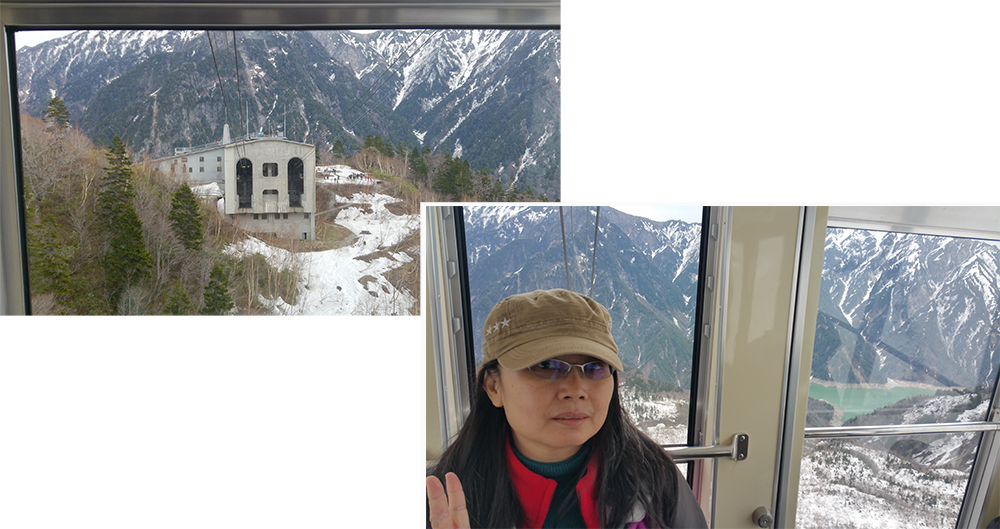 The cable car ride was only 7 mins and interestingly the entire length of cables was suspended all the way from Kurobedaira station to Daikanbo station without any pylon in between. It was a pity that the ride was so short and the cabin was so pack with people.

When we stepped out of the cable car and looked down the mountain, the view we saw was very stunning. We could see all the way to Kurobe dam which was 488 m below. 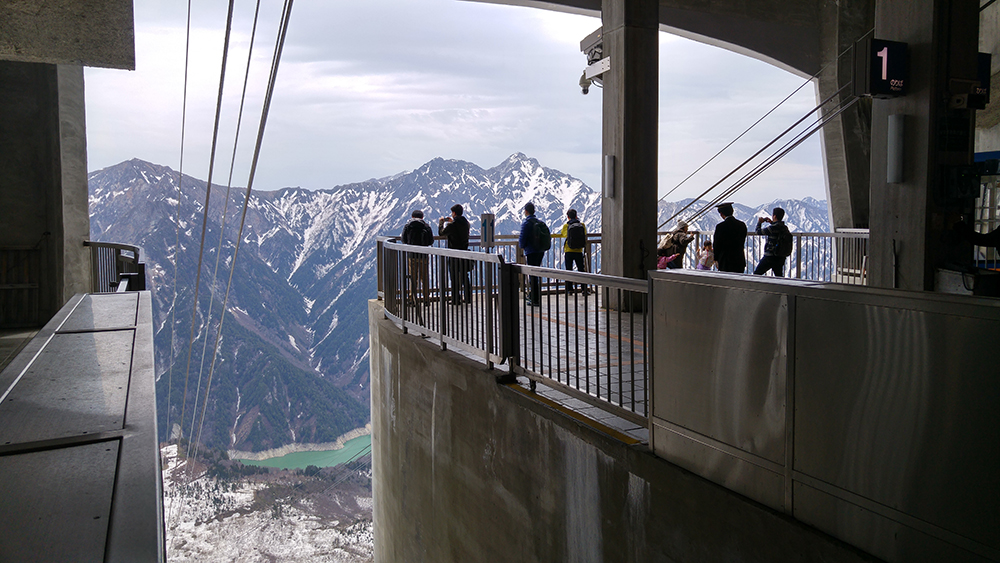 At Daikanbo Station we went up a trolley bus and it took us to Murodo Station through a tunnel that ran through the heart of Mt Tateyama . The trolley bus was powered by electricity so that no exhaust fumes would be produced and pollute the snow mountain.

When we reached Murodo Station it was only 10:40 am and the whole place was packed with people. There were queues everywhere, some people were queuing for food, some were for buses to continues the journey eastward while other for their journey westward. We were squeezing our way among the people to find our way out of the station.

It was a relieve to finally step out of the station. Wow! The gigantic snow mountain was just right in front of us. Beyond the car park we saw a long queue of people walking towards the snow corridor. Interesting though there was snow everywhere the temperature was not very low it was about 6 degree celsius. 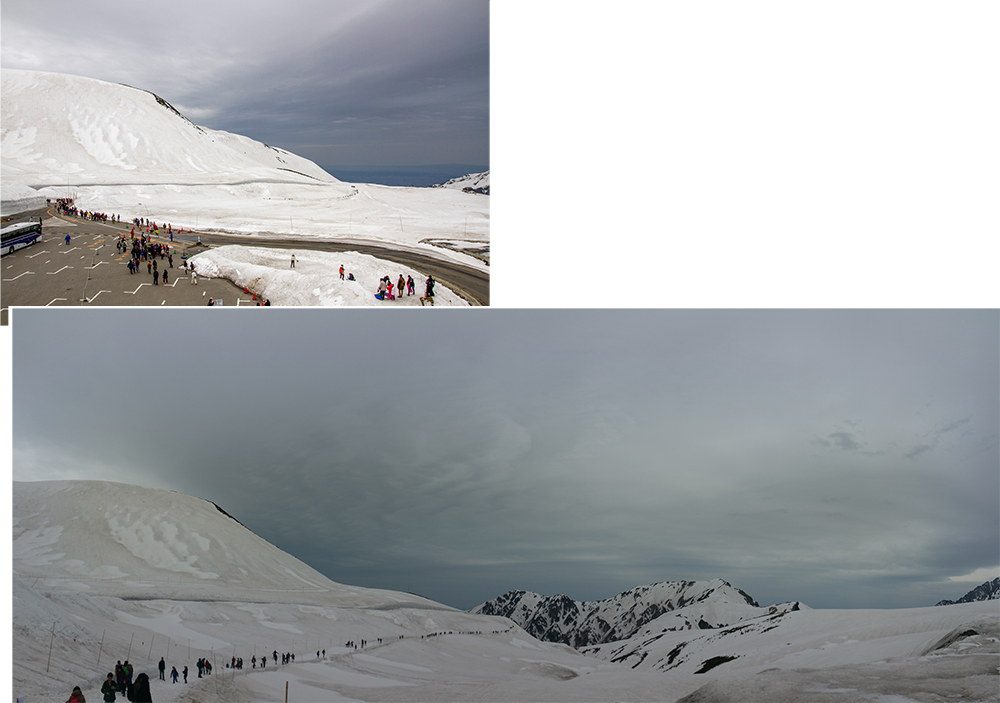 Murodo Station was within walking distance to the famous snow corridor of the Tateyama Kurobe Alpine Route. So whether travelling eastward (starting from Tateyama Station) of westward (starting from Ogizawa station) everybody stopped at Murodo Station to explore the snow corridor. The snow corridor was opened on April 16 this year and on the opening day the snow wall reached a height of up to 13 metres. By now which was 20 days later the highest height of the wall had already dropped to below 10 metres. 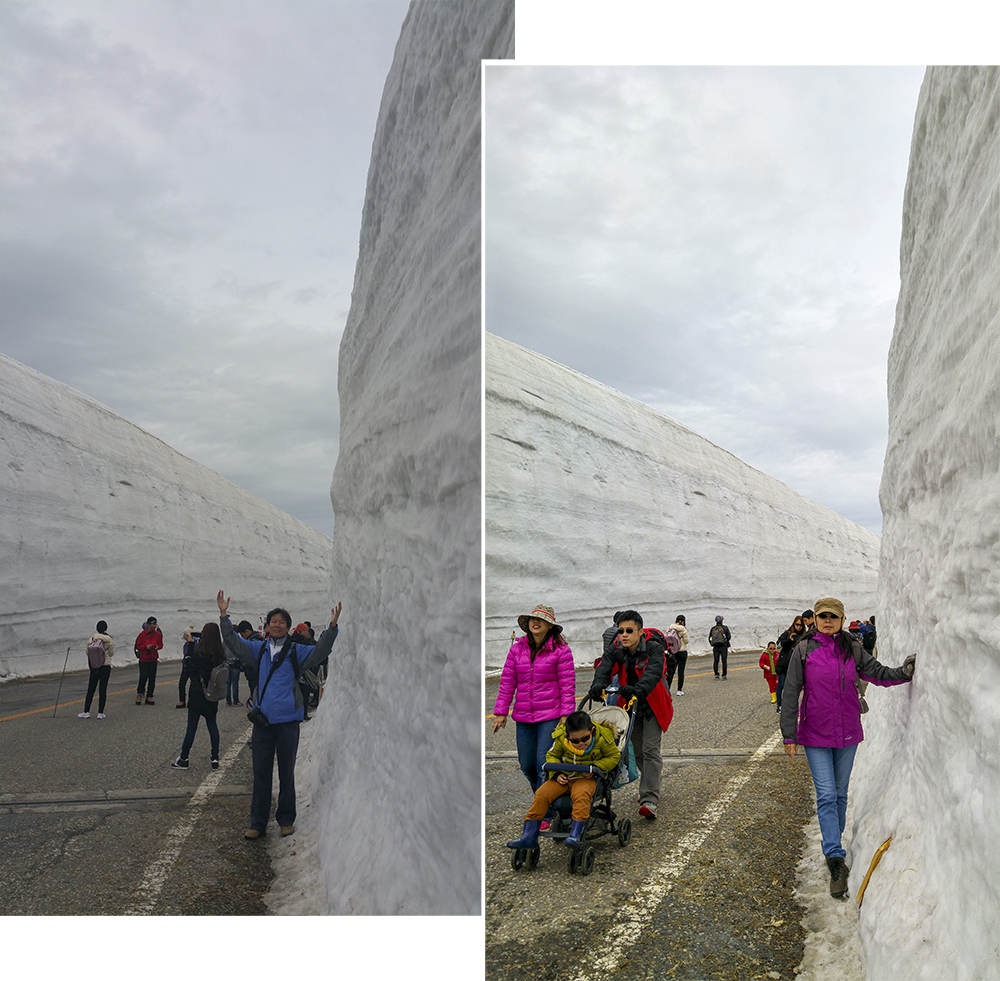 At the Snow Corridor

Murodo area of Tateyama had one of the heaviest snows in the world and this snow corridor was craved through the snow every mid April to expose the road. A short stretch of this snow corridor road of about 500 metres was opened for visitors to walk from 10.00 am to 3 pm from 16 April to 22nd June. In previous years there were times that the highest height of the snow wall reached up to 20 metres.

It was quite fun trekking in the snow especially when the weather was not very cold. There was no wind and we were comfortably warm in our fleece jackets, windbreakers, gloves and trekking shoes. We trekked to the two ponds nearby but as expected there was snow and no water in these ponds. After about three hours in the snow we decided to go back to Murodo station and start our return journey to Ogizawa Station. 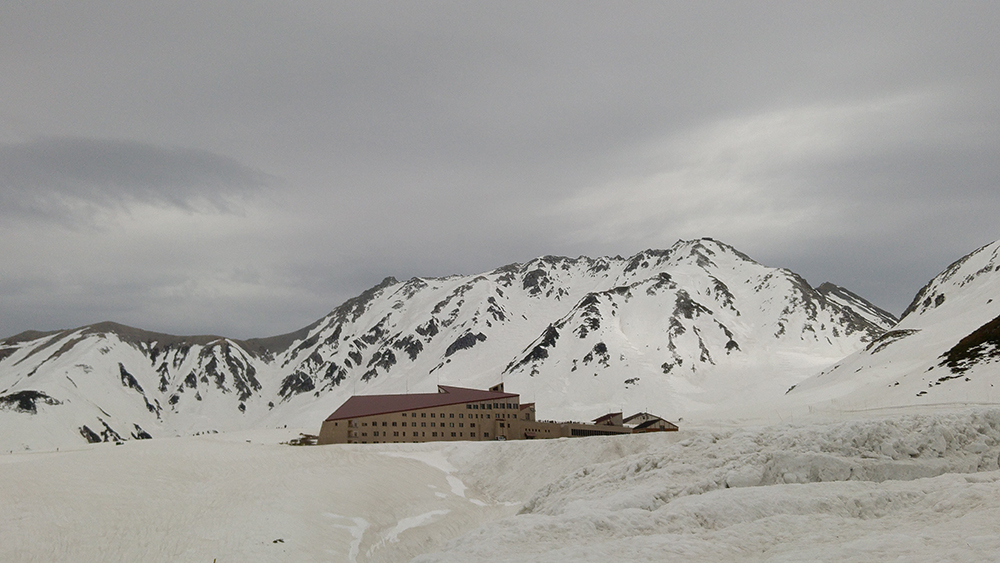 There was a high observatory deck above Daikanbo Station that we skipped earlier on our way up to Murodo. Our intention was to explore it only on the return trip. When we arrived at Daikanbo station we did not board the Tateyama Cable car but searched for the stairs that led up to the observation deck. It was a rather long way up. It was very windy up in the open deck. The view was very nice as we could see the entire surrounding. 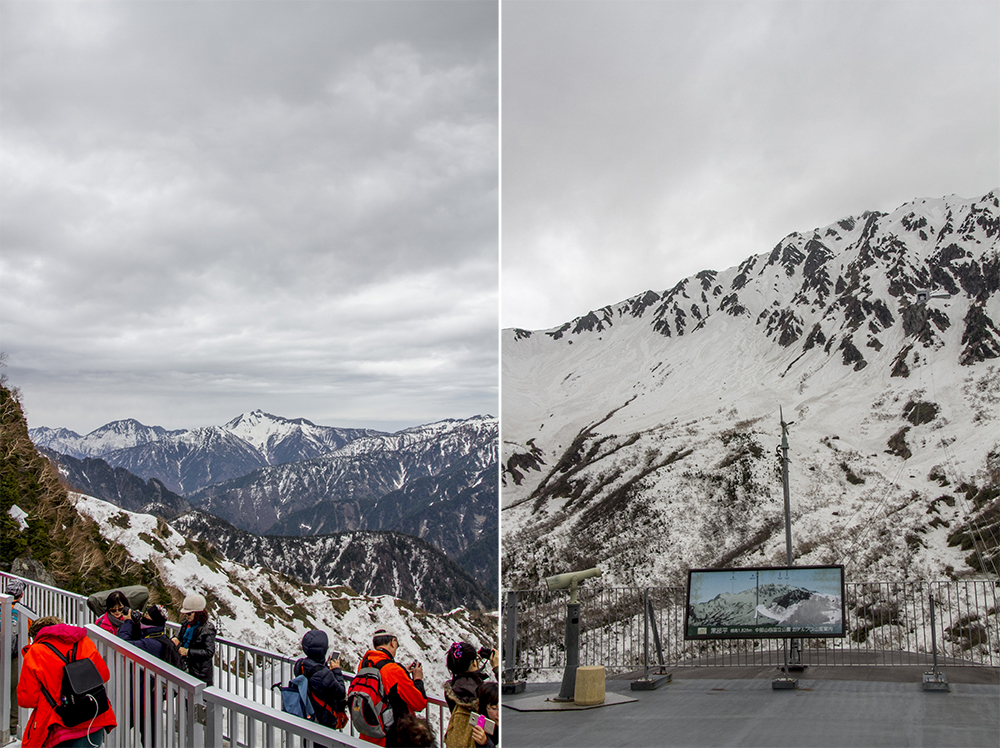 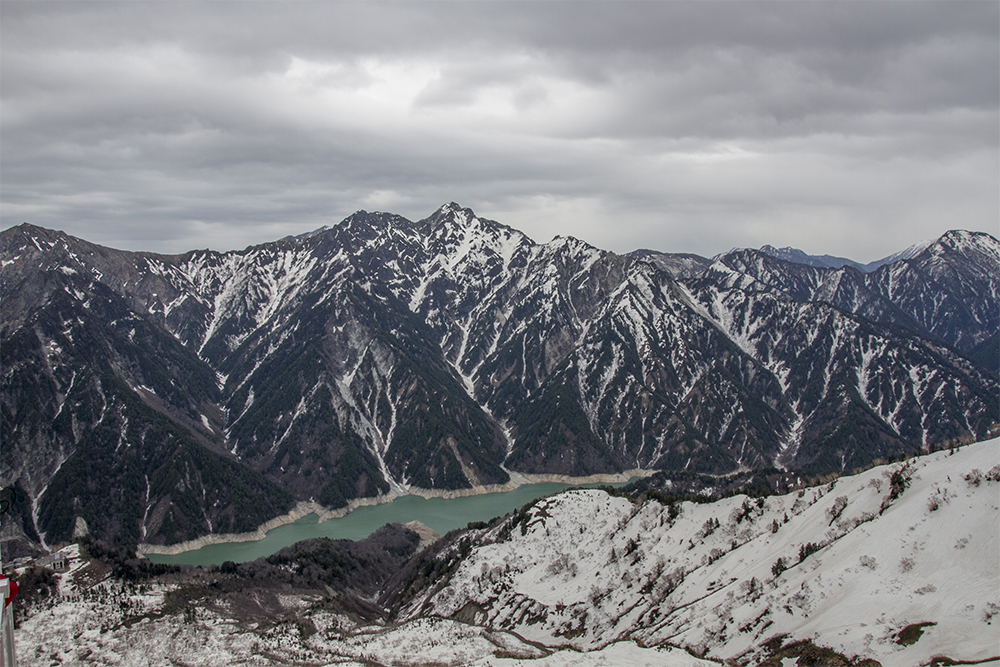 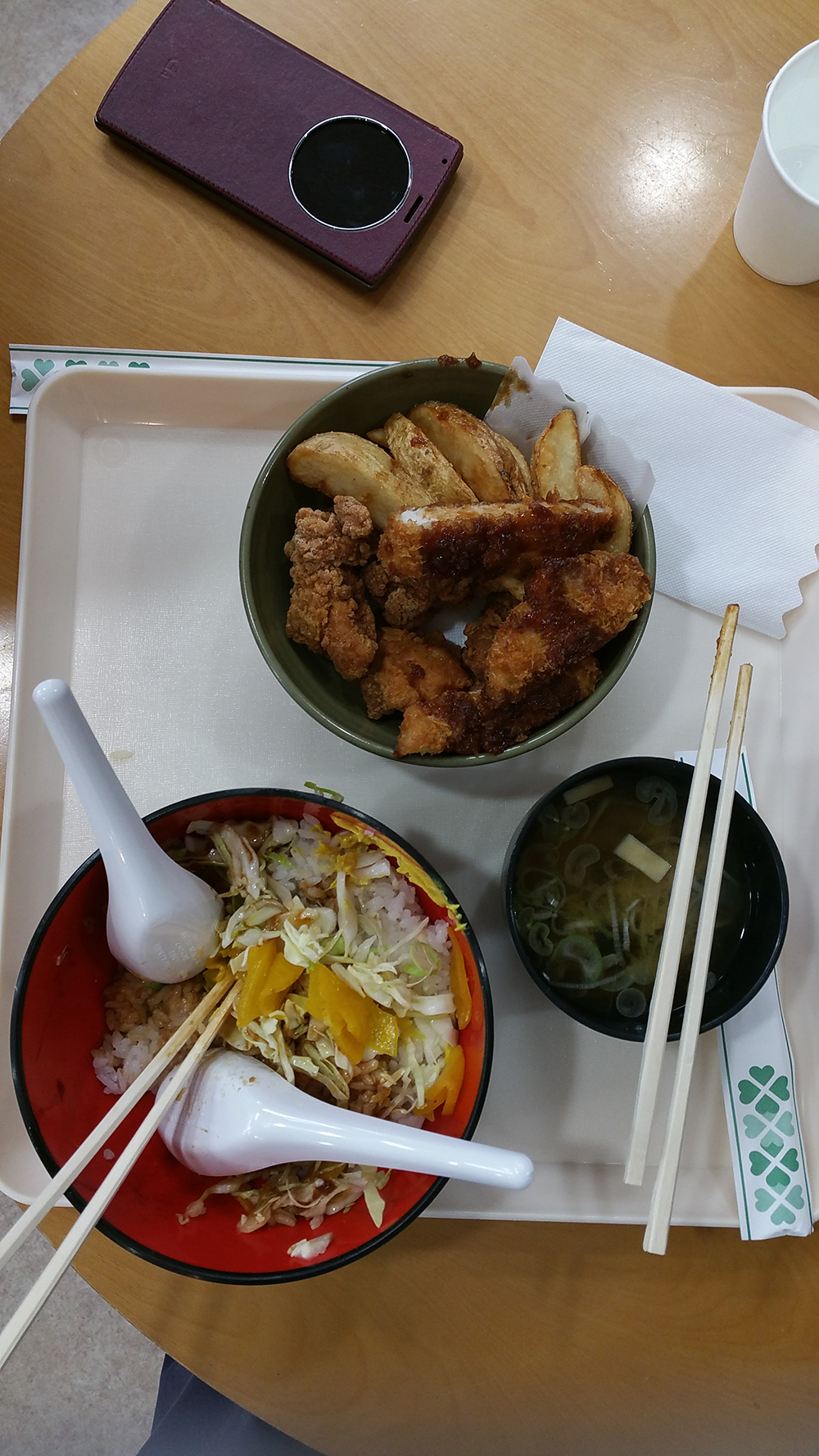 We were back at Kurobeko Station at about 3.20 pm and decided to stop at one of the two restaurants beside the station for a late lunch.

This was the last station where we could have a meal as I did not remember seeing a restaurant at Ogizawa station, our next and final station before we picked up our car.

We were lucky as the restaurant was taking the last order when we handed in our order vouchers, bought from the vending machine, to the chef.

We had about an hour for our meal as the  last Kanden Trolley bus from Kurobeko station to Ogizawa station would leave at 4.30 pm.

When we joined the queue for the last trolley buses at 4.10 pm, it was packed with people. I was wondering what would happened to those people who missed this last trolley bus.

From Ogizawa station to our hotel at Takasaki was a long distance of about 195 km. Luckily there was an expressway that took us to about 70% of the way. So we were able to reach our hotel in 2.5 hours.

Our hotel for the night was Toyoko Inn Takasaki-eki Nishi-guchi No.2. There were two Hotel Toyoko Inn side by side, our was No. 2.  We had booked a twin room and the cost were  ¥8208 for the room and  ¥500 for parking. This was our fourth room in a Hotel Toyoko Inn and by now we were so familiar with the layout that we knew exactly where every items were placed in the room. We needed only two minutes to settle in our stuffs and were ready to leave for our dinner.

I noticed that Toyoko Inn Hotels were usually sited very near train station so it was very easy to get to the malls around the train station for meals, shopping or cafe latte. This night we packed our food from the mall and went back to our room to eat. 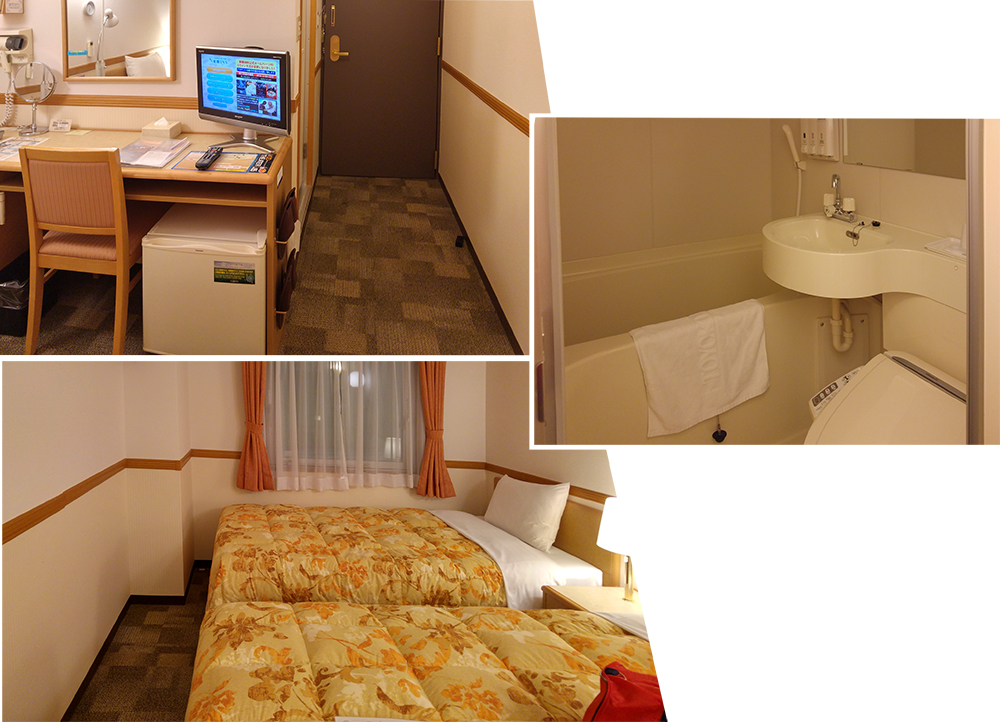