We had planned to visit two waterfalls, a tree and a shrine today. In the morning we would drive to Fukiware Falls a wide waterfall, then in the afternoon we would proceed to Kegon Falls, a tall waterfall.  By about 4 pm we would like to reach Nikko to visit Nikko Toshugu, a UNESCO world heritage. In between the two falls we would like to branch out to view a 300 years old cherry blossom tree. Our hotel for tonight would be in Utsunomiya city. 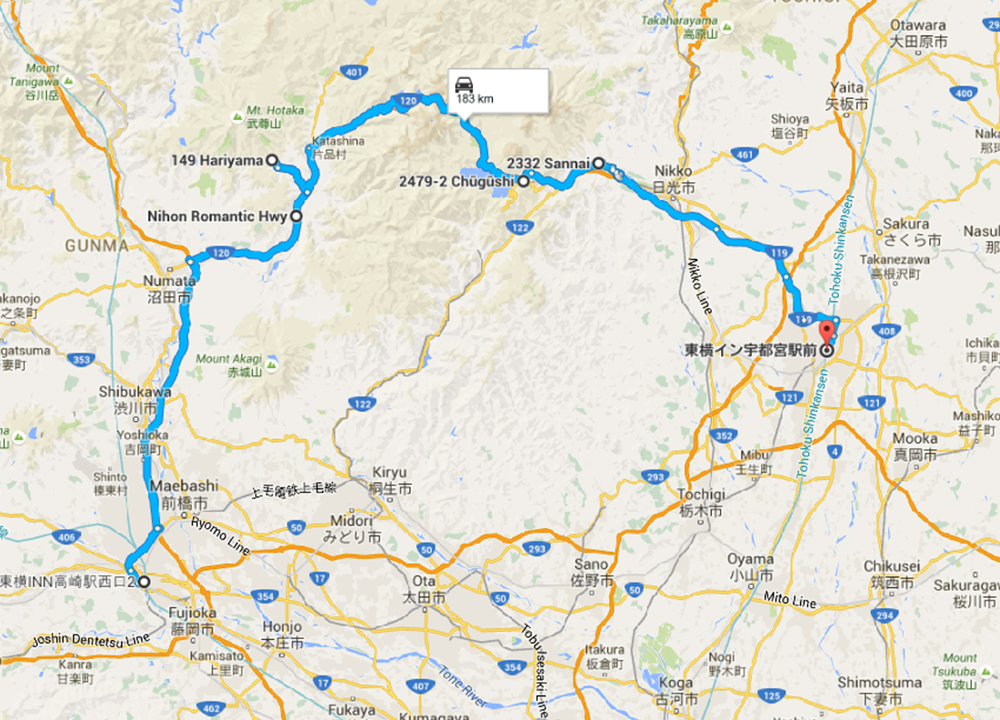 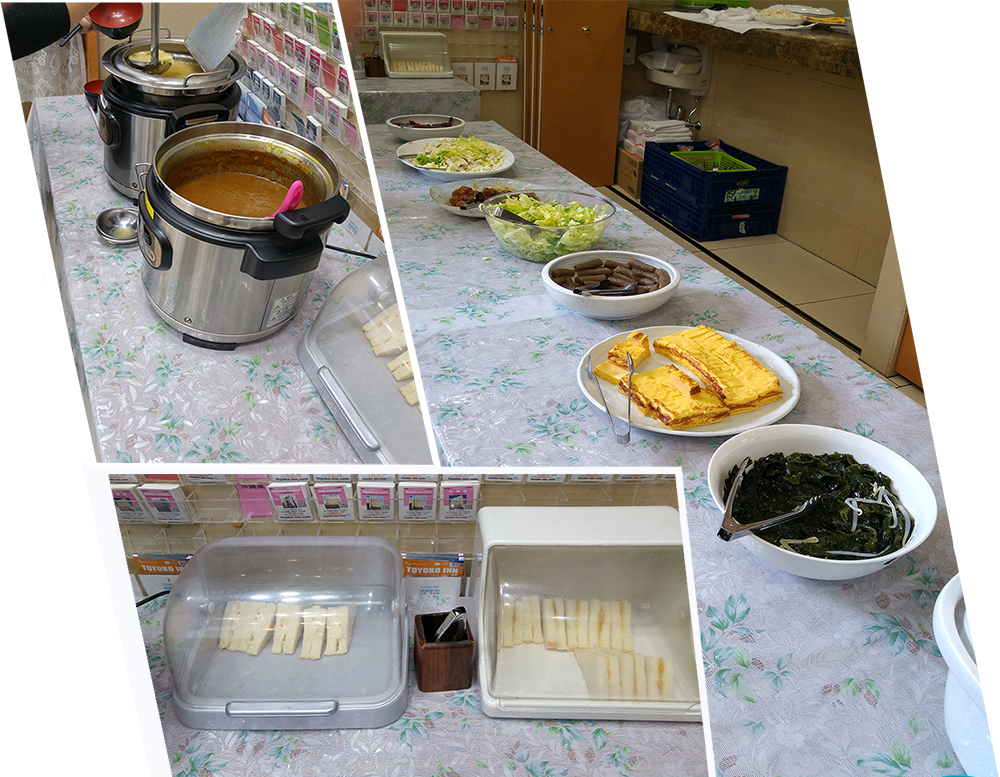 We ate our fifth breakfast at Takasaki Hotel Toyoko Inn and we were begining to get tired of the food. Though it was a different hotel the food were always very similar and the same “bland” coffee. But it seemed such a waste not to eat the provided breakfast so we just ate it.

From our hotel we drove for about 60 km and reached Fukiware Falls in about an hour. We parked at a small car park and paid ¥500. From the parking lot we just had to walk a few steps to reach the stairs leading down to the fall.

Along the way I saw many signs that had the word “danger” in them. There was also this broadcast blasting loudly informing visitors to stay behind “white lines”. The broadcast repeated over and over again. I did not know what to expect of Fukiware Falls, in certain pictures of the fall that I had seen it looked huge and yet in some other pictures it looked small.

When we reached the bottom of the steps there was a walking path that meandered along what seem like a river. There was a white chalk line drawn on the edge of the river and wardens were policing the place very seriously. The moment a visitor stepped beyond the white chalk line we would hear a loud whistle and a yell from a warden.

“Do not cross the white line!”

The river bed was made up gigantic boulders and water was cascading furiously over them.  I felt a bit disappointed with the waterfall, as it was just a river of fast running water. It was not much of a waterfall and it did not look like the pictures that I had seemed of Fukiware Falls. I was wondering if we had come during a season of low water. Since we were already here we continued to walk on (northward). Then I saw a sign post pointing to two waterfalls. So the “Fall” that we had just walked past was Masutobi Falls, Fukiware Falls was still ahead. 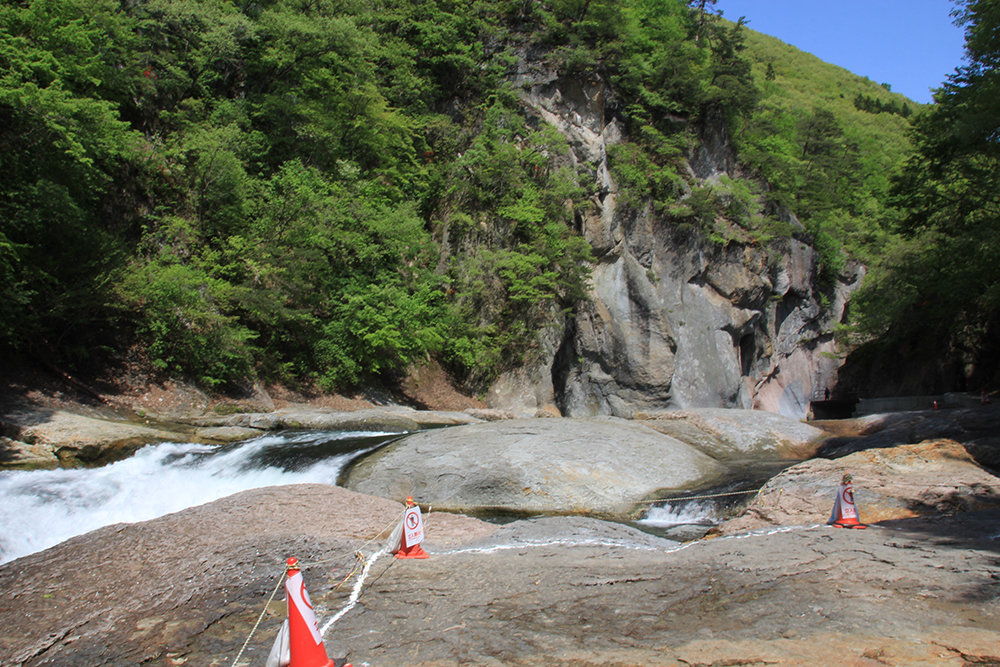 We could only hope that Fukiware Falls would be a more impressive.  We walked along the river going in the upstream direction. There was a bend ahead and the river turned out of sight. This river, Katashina River, ran through the valley which was also called Fukiware Gorge. 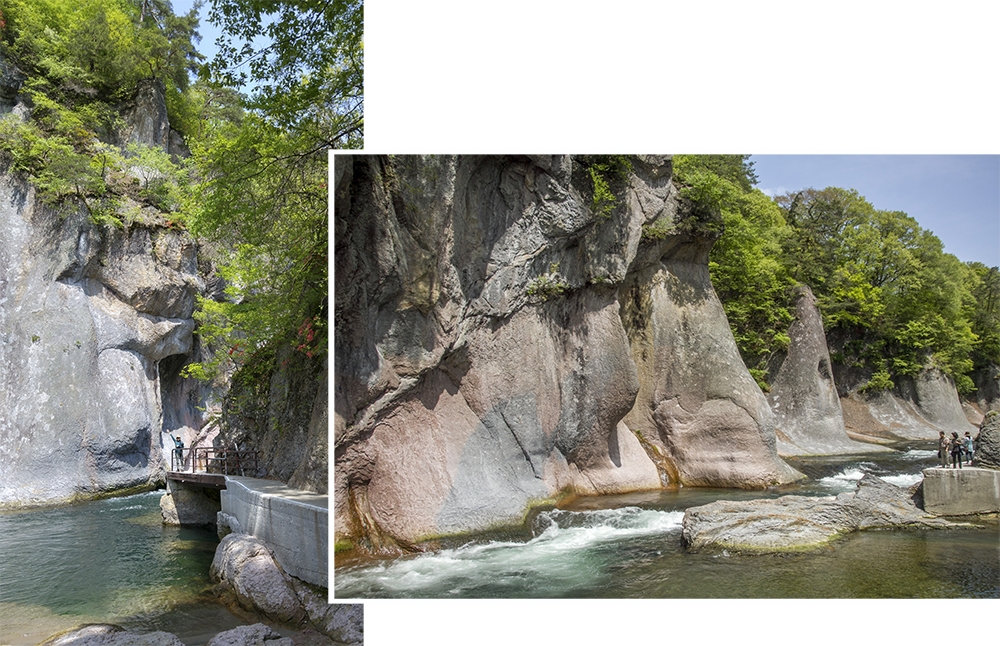 After passing the bend of the river we came upon some interesting rock formation, the vertical rock wall along the river looked like folds of a curtain. Finally we reached Fukiware Falls, it was awesome, it was unique. I had never seen a fall like this. There was a gigantic hole/crack in the river bed and tons and tons of water just went over it. The hole/crack was 7-8 metes deep and and the water that went over the edges drained off downstream. 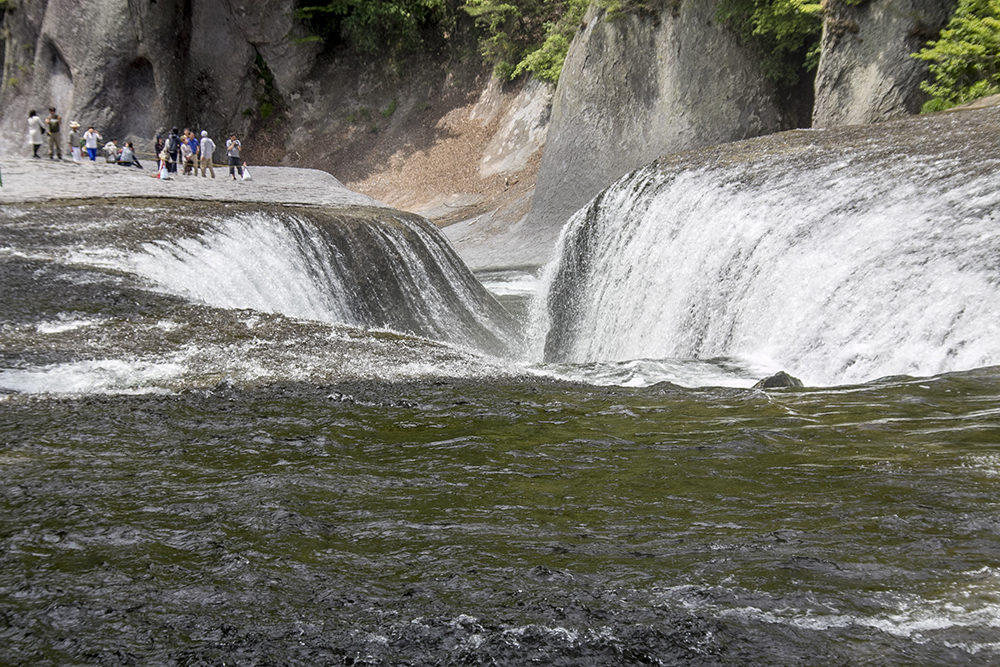 We followed a walking trail that was a loop. It led us up river passing Fukiware Falls, then it crossed a suspended bridge and brought us to the other side of the river. On the opposite side of the river we went uphill and then the trail took a down river direction. We passed Fukiware Falls again but this time we were viewing it from a high elevation. There were supposed to be three observatories on the hill but we could only find two. From the observatories we could see the entire Fukiware Falls. 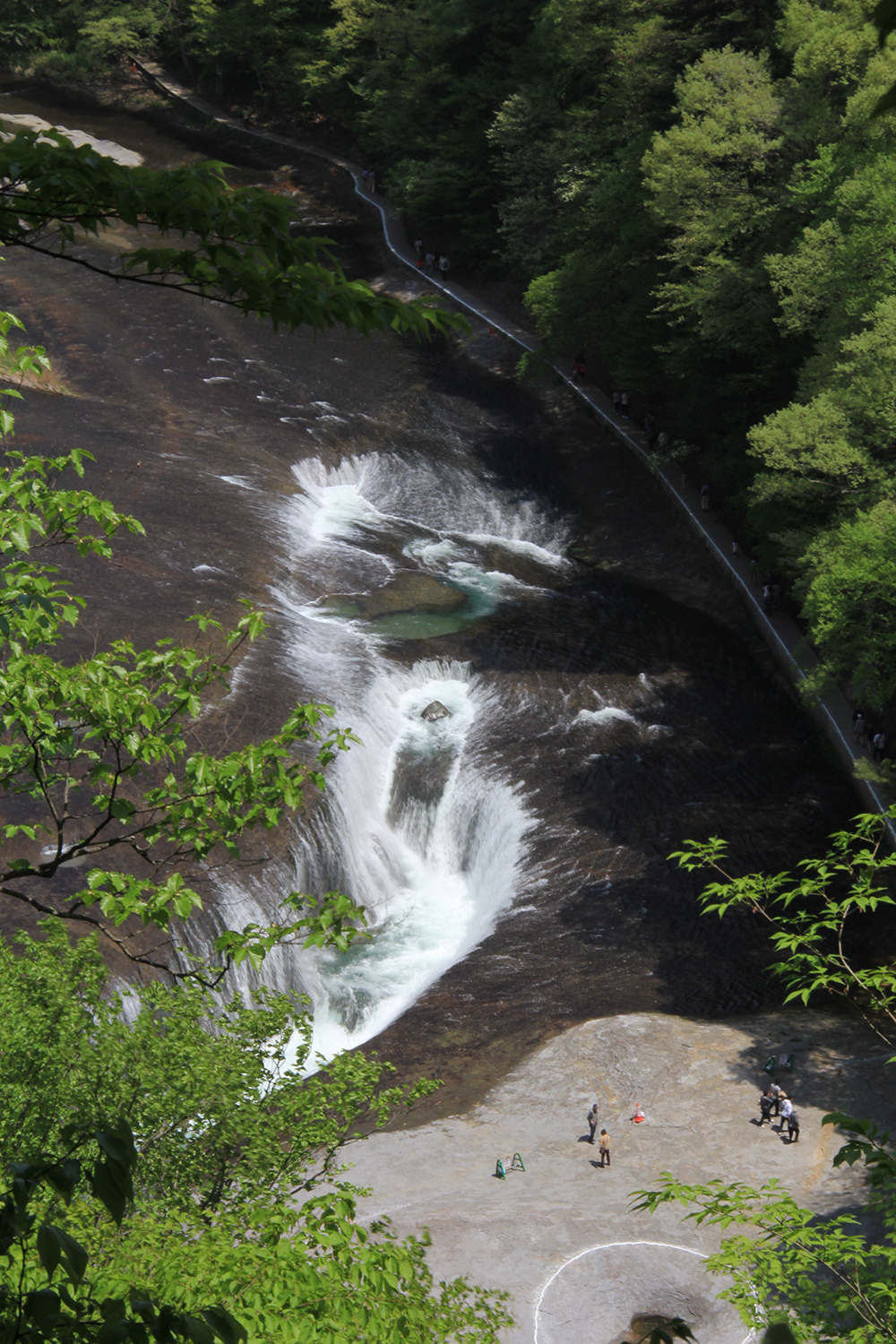 Tenno Zakura was a 300-year old huge cherry tree that bloomed in late April – early May. I would not normally want to see a single cherry tree but because it was only 10 km (20 minutes) drive from Fukiware Falls and was along the direction of our next destination Kegon Falls so we planned for a slight detour and gave it some attention since it was listed as a attraction in this region.

We found Tenno Zakura easily and was definitely at the right location as signboard on the path indicated. Unfortunately 7th of May was too late. There was not a single cherry flowers on the tree, not even a single pink petal on the ground! 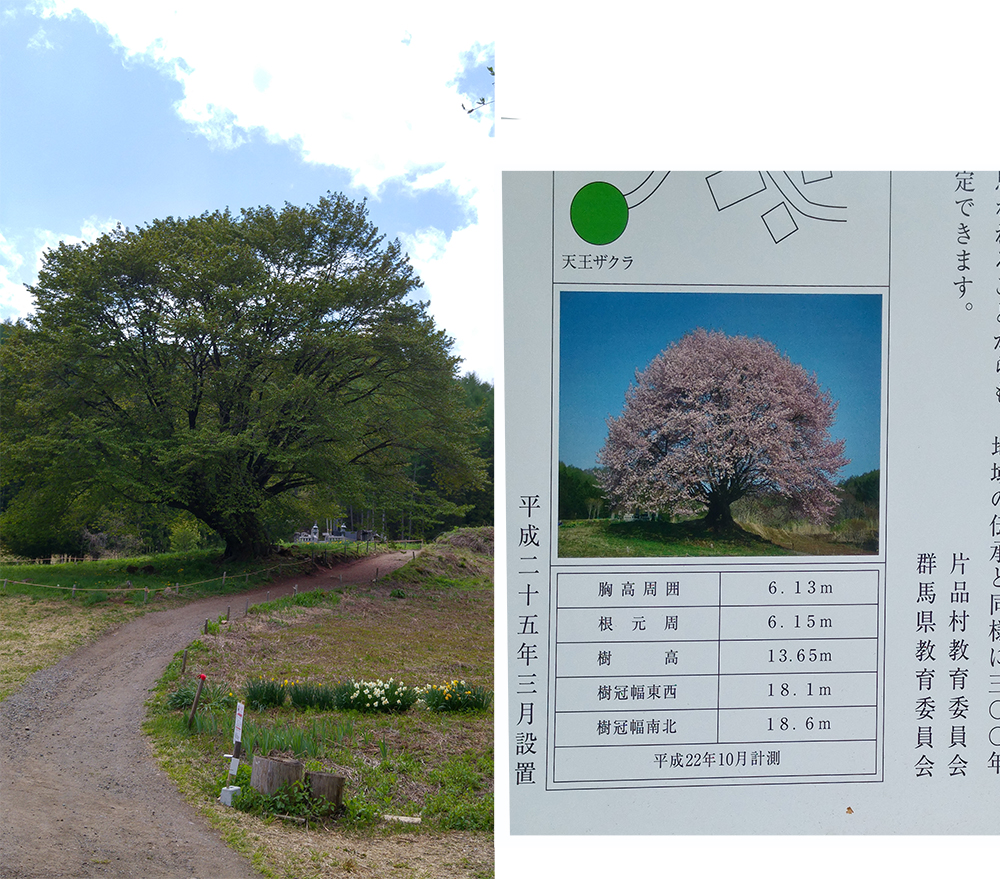 I wasn’t too disappointed at all. I had seen fantastic scenery of cherry blossoms in Korea in 2013. It was at Jinhae when 200,000 cherry trees were in full bloom. After that scene I could not imagine any other places in the world that would evoke in me the same awesome emotion.

The detour to Tenno Zakura did brought us some interesting sights. We came across carp kites again! This time the kites were hung over a valley. 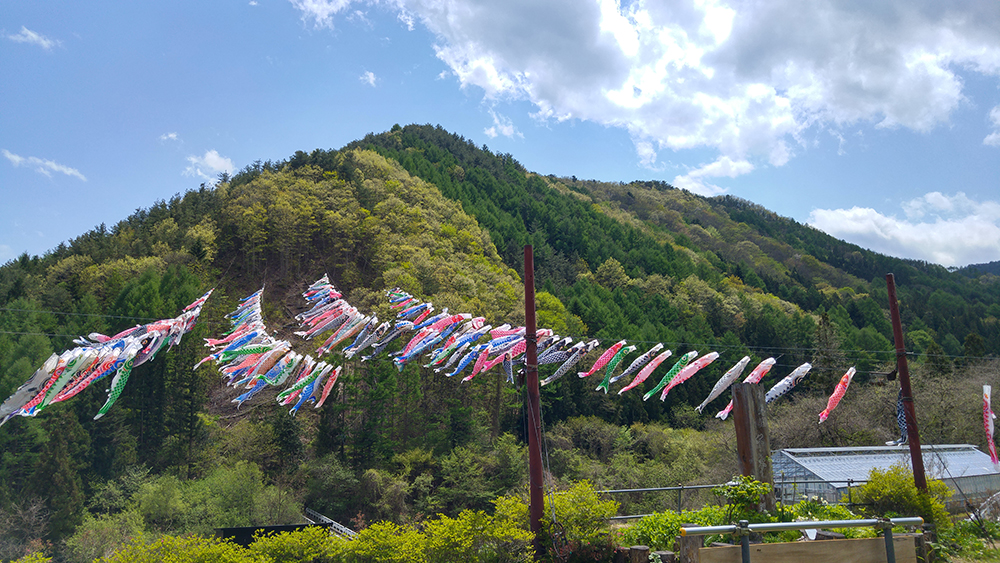 Our driving route from Fukiware Falls to Kegon Falls, to Nikko Shrine and to Utsunomiya City was actually travelling on parts of the Japan Romantic Road (an equivalent of Germany romantic road). The romantic road passed through onsen resorts and natural scenery. As we drove through the country roads, winding uphill and downhill we passed leafless trees. The scenery was quiet and still, definitely not romantic. I supposed we were not in the right season of the year to catch the romantic “air”. 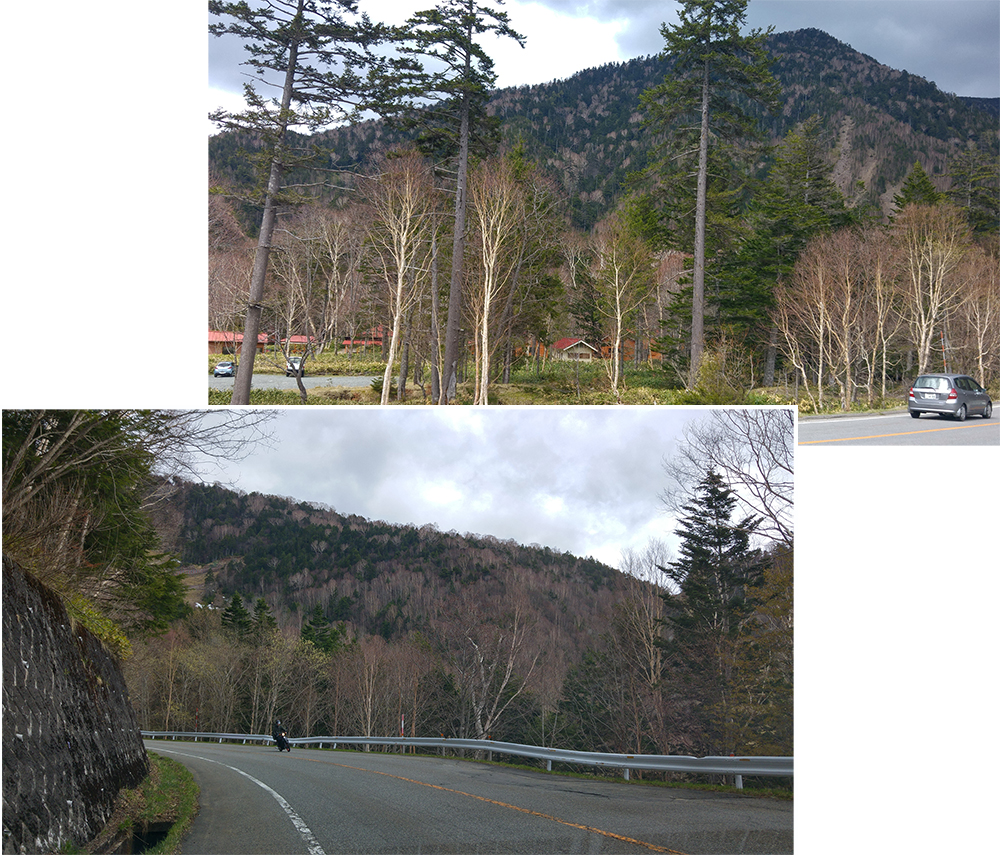 Looking around, I imagined that the trees were full with green leaves like it would be in summer, or when these leaves were in their autumn colors, then indeed this “romantic road” would evoke a totally different feeling in me.

It was a bit boring driving on a lifeless road so when we saw some shops and eateries at the side of the road we decided to take a late lunch break. 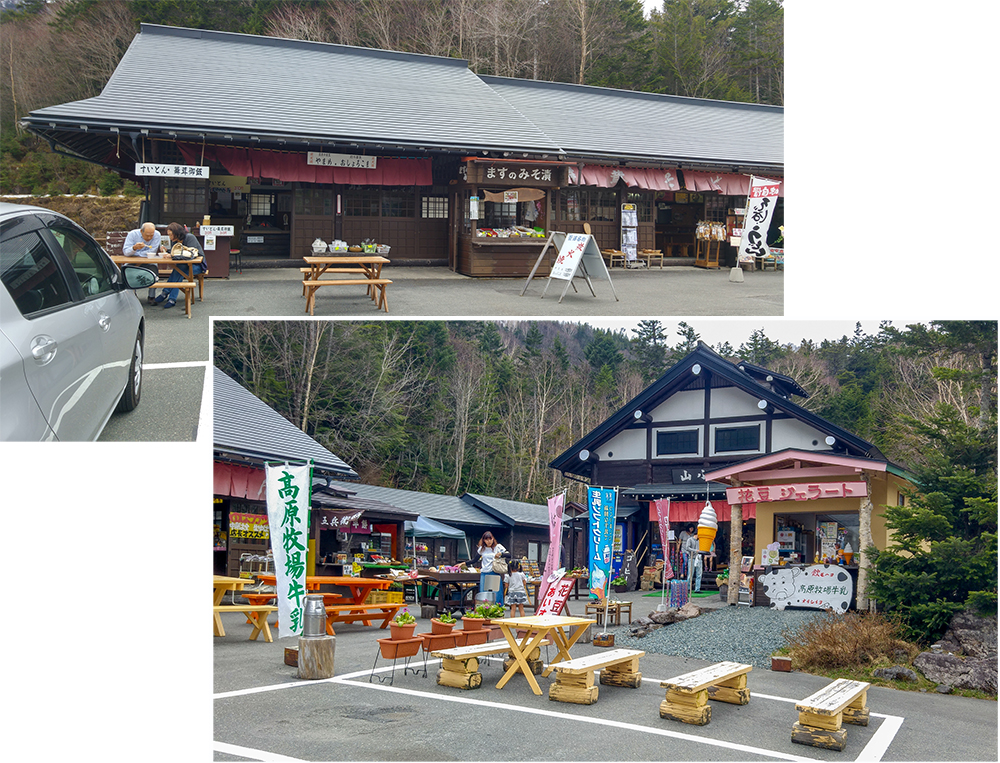 We walked into one of the restaurants and saw a man “BBQing” fish using some material that looked like sand. The weather was chilly so a hot fish would be a nice meal. Unfortunately the fish was rather small and it costed ¥600 per fish. Between the two of us we would need to eat five to be full, too costly so no fish for us. In the end we opted for two bowls of hot udon costing a total of ¥1760. After lunch we went to the next shop, a souvenir shop to do some window shopping and to get a cup of “special” cafe latte. The latte was okay nothing fantastic. 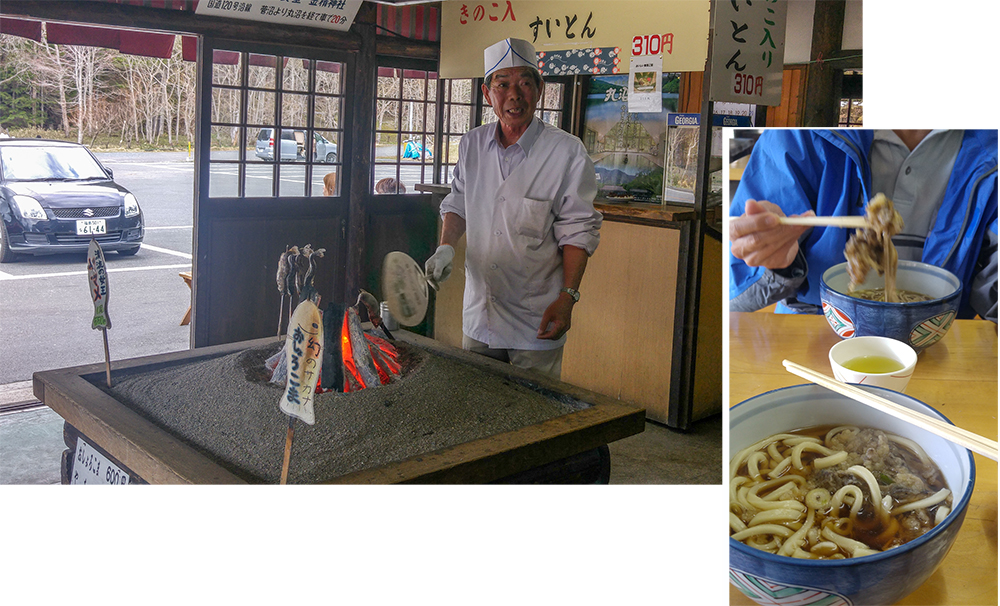 After a nice hot meal and a good leg stretch we were back onto the road again. The road went uphill and we drove passed Nikkoyumoto ski area. There was still some snow on the ground especially down the side of the hill. After a while the road led downhill and soon we spotted  a beautiful lake, Lake Chuzenji. The lake was beautiful against the mountains backdrop. Lake Chuzenji was one of the most scenic places in Nikko in autumn. 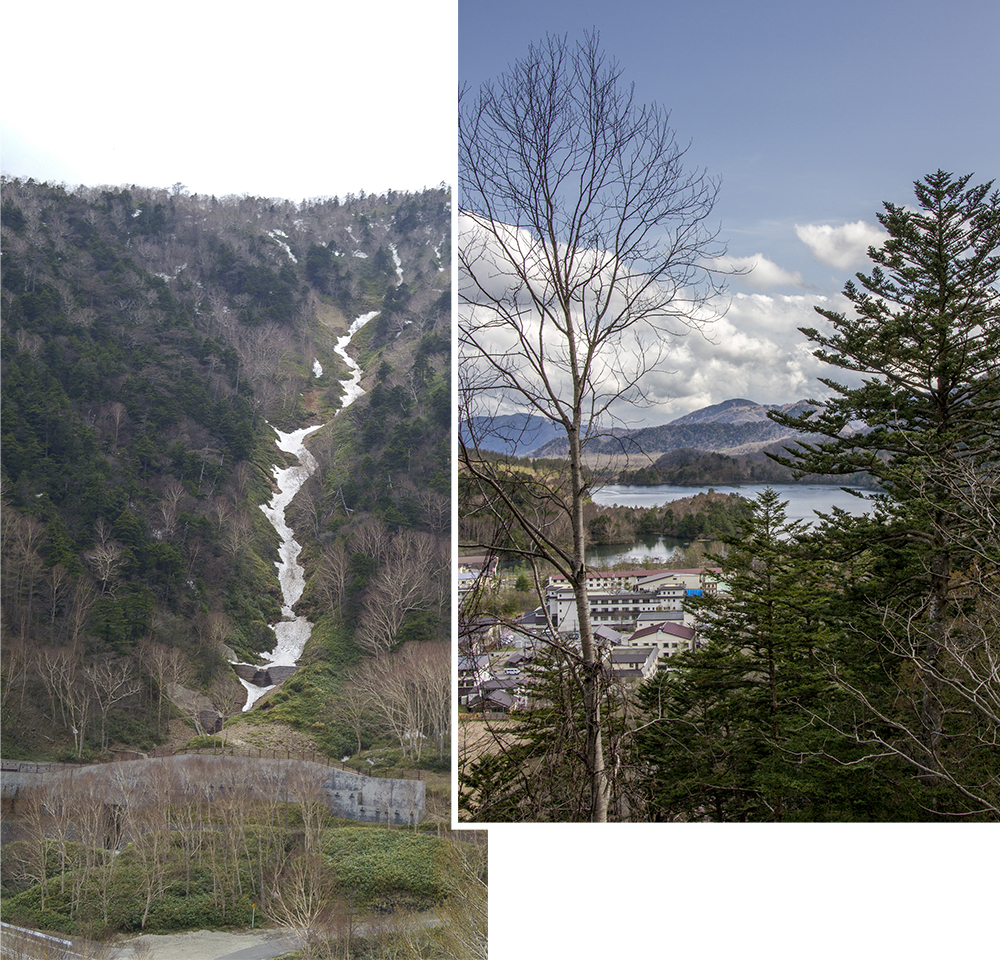 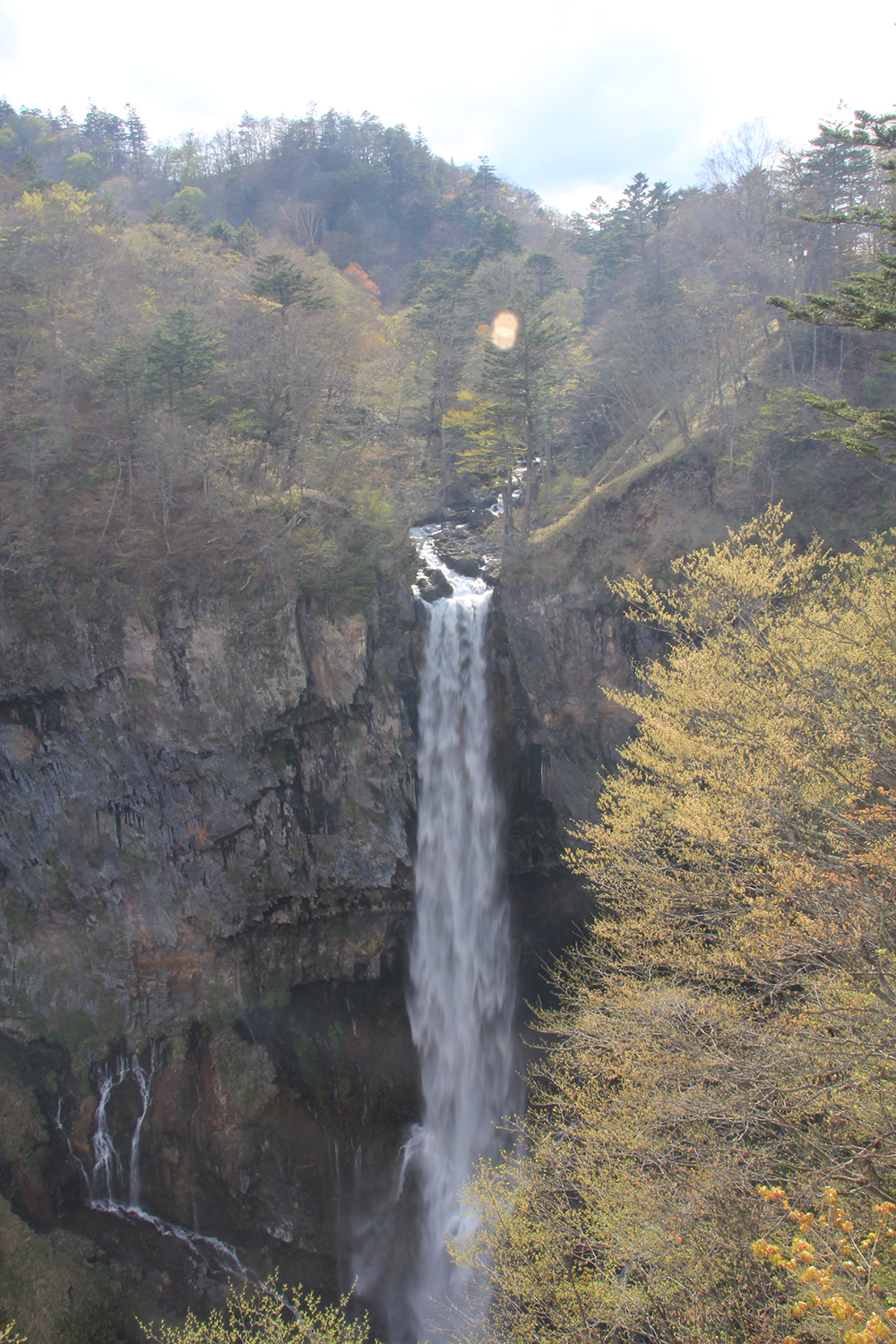 Kegon Falls was just after Lake Chenzuji. From the road we turned right into a huge car park (parking charge : ¥320), around the car park  was a couple of shops. We walked a short distance to an observation deck where we saw Kegon Falls. It was a tall waterfall but the deck was higher than the fall and we could look down to top of fall. The fall extended far below and out of our sight.

When we were about to give up we saw a signboard pointing to a “Kegon Falls Elevator”. We found out that the elevator was the only way down to the second observation. 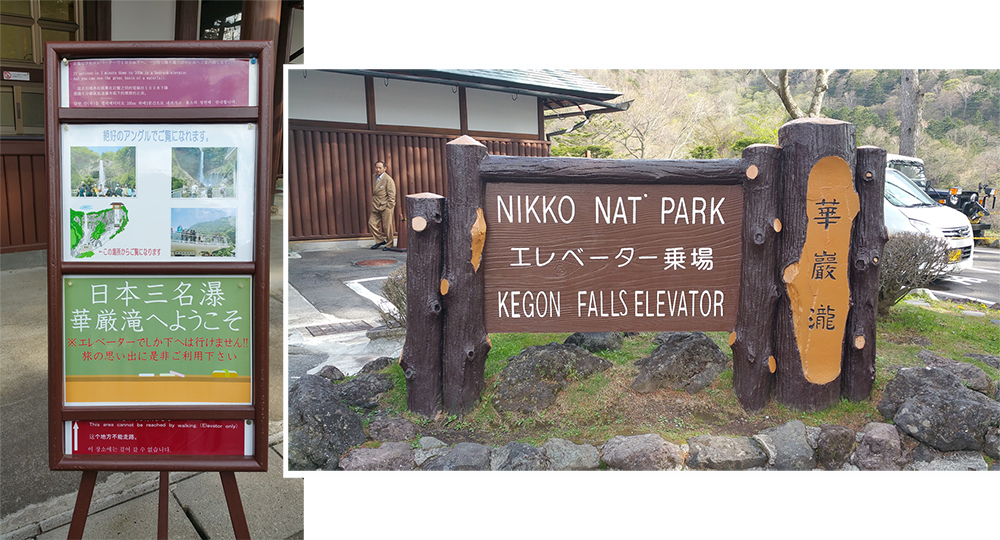 The cost of riding the elevator was ¥550 per person. The elevator took us 100 metres  below the ground and it opened out to a long tunnel that led out to a observation deck. 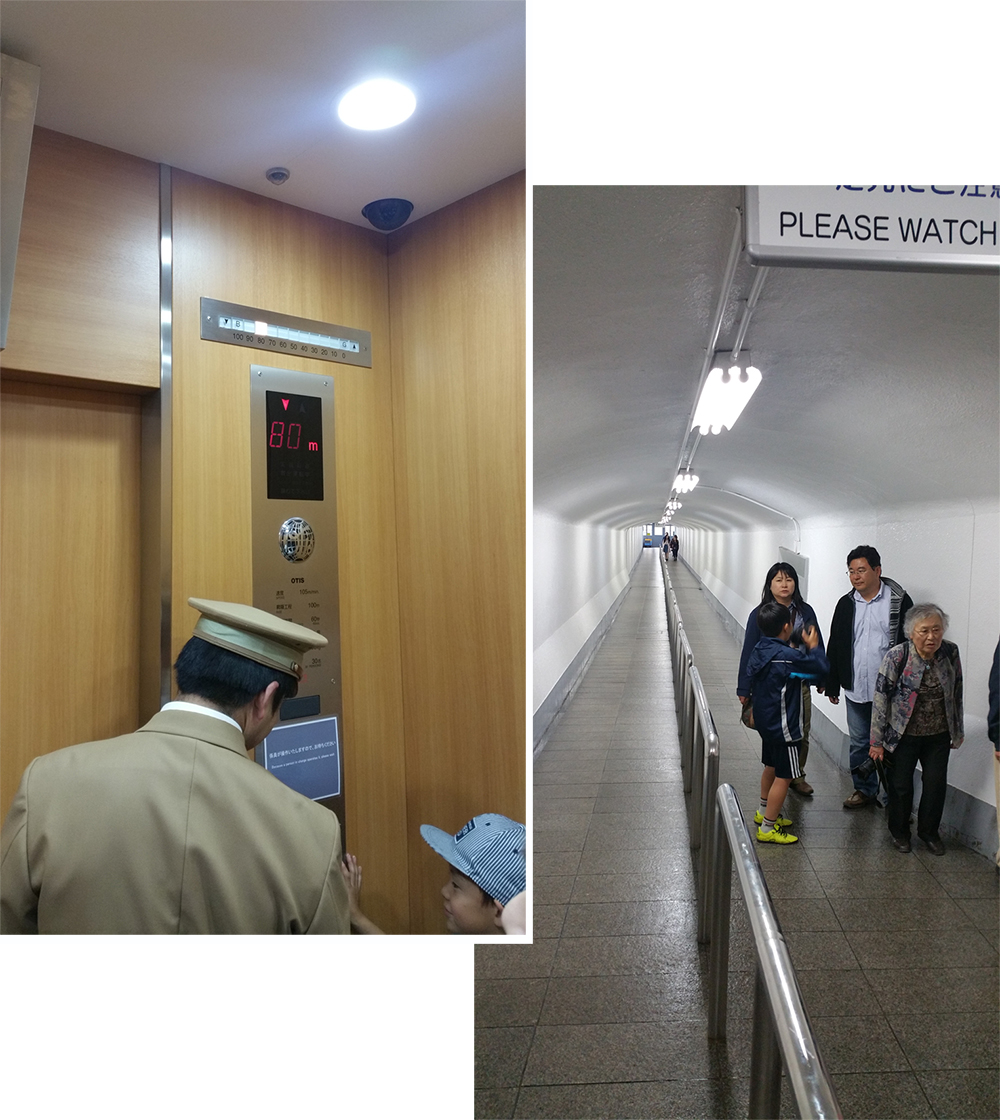 Elevator down to a tunnel leading to an observation deck

From the second deck, Kegon Falls looked magnificent. It looked like the Falls was emptying into a huge cavern bowl in the ground. Standing at the deck we could feel the water droplets from the Falls. The deck had two levels and both level offered fantastic view of the fall

Kegon Falls was listed as one of the three top waterfalls in Japan. We were glad that we did not miss this second observation deck or we would surely have left this place without realising the beauty of Kegon Falls. 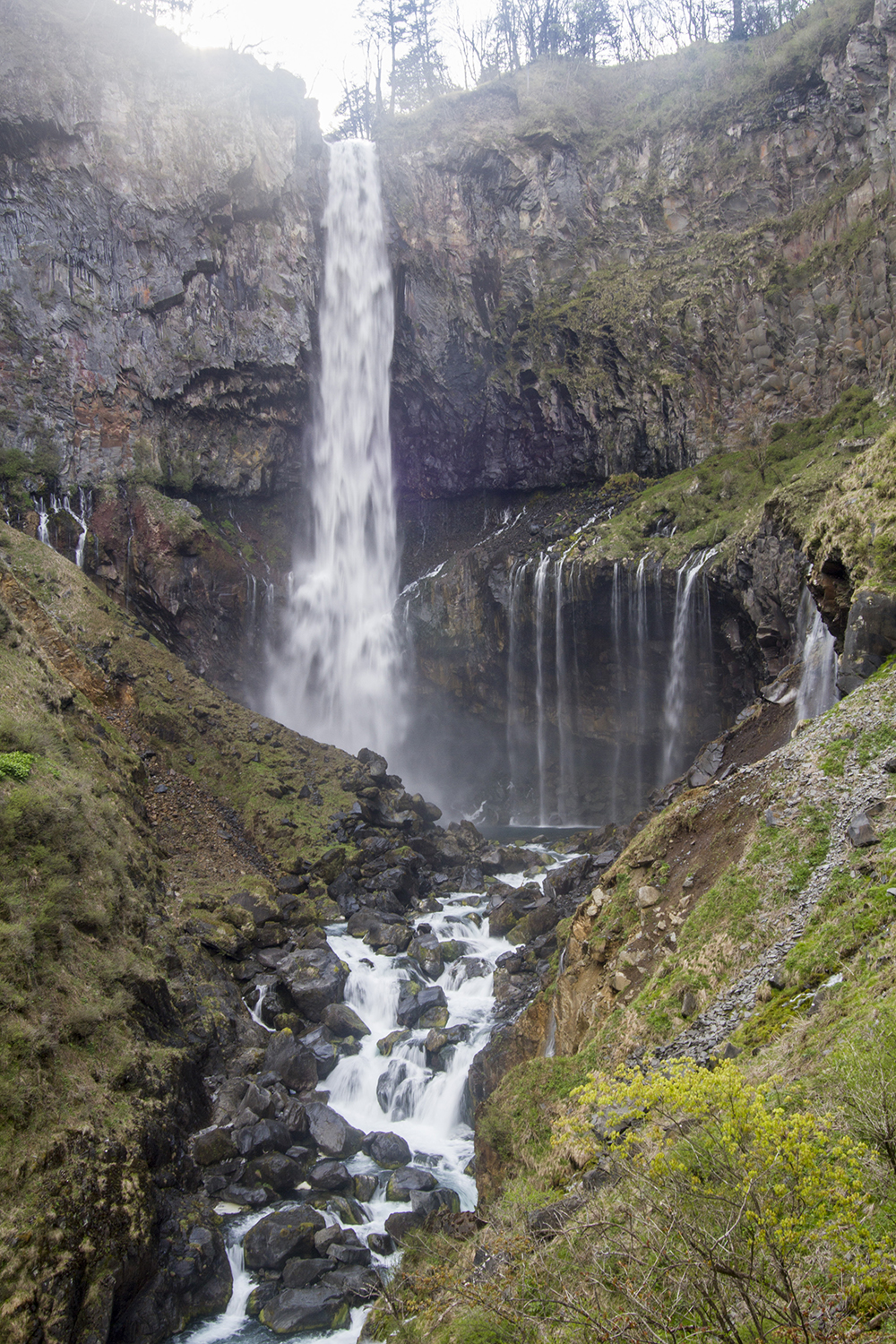 After Kegon Falls our drive to Nikko Toshugu had to go through a very winding road with many switchbacks. Every time we passed a curve on the road there would be a sign with a number that increase 1 at a time. It looked like a counting of road bends. The signs also had a flower symbol so we deduced that if the season was right this road would be full of flowers!

By the time we reached the car park (parking charge : ¥600) of Nikko Toshugu it was passed closing time. We still decided to proceed to the shrine hoping to catch a glimpse of the UNESCO World Heritage Site.  We could only explored the outside of the shrine as for the “golden” painted shrine that we had hoped to see it was too deep in and could not be seen from the outside.

We could come back to the Toshugu again the next day but decided that we were fine with not seeing it as we had seen so many shrines already. 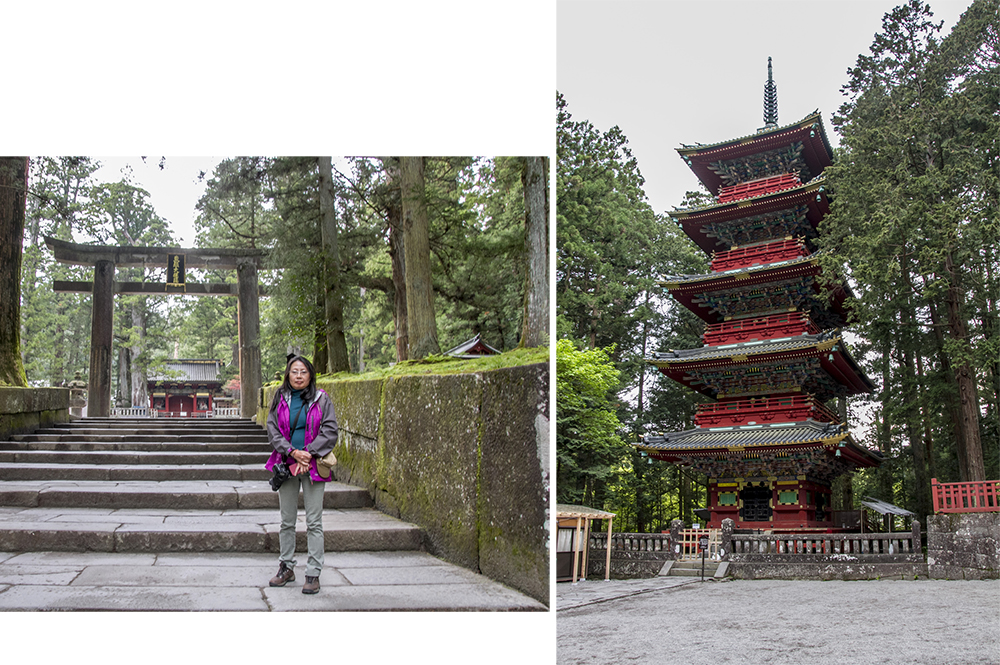 Our hotel was Toyoko Inn Utsunomiya Ekimae. It was a twin room for ¥9234 and parking was ¥500 with ensuite bathroom and free breakfast the next day. The drive from Nikko Toshugu to the hotel was 40 km taking about 45 minutes.

As usual we visited one of the malls at the subway station just a 500 metres from our hotel to pack dinner and went back to our room for a relaxing meal. 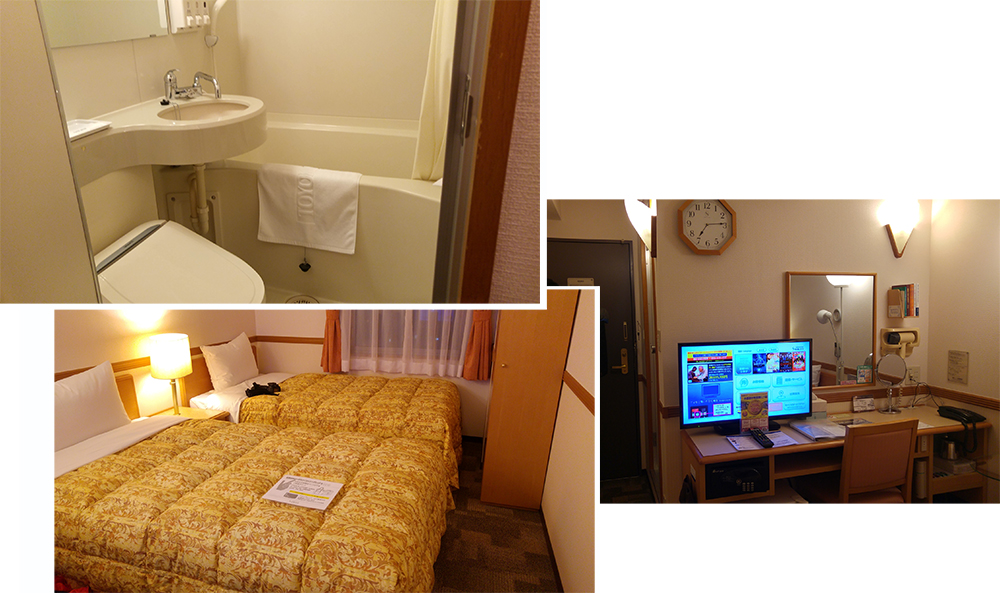