Our plan was to visit Hitachi Seaside Park in the morning and to visit Ashikaga Flower Park in the late afternoon. As for the night we would stay in Ashikaga city. 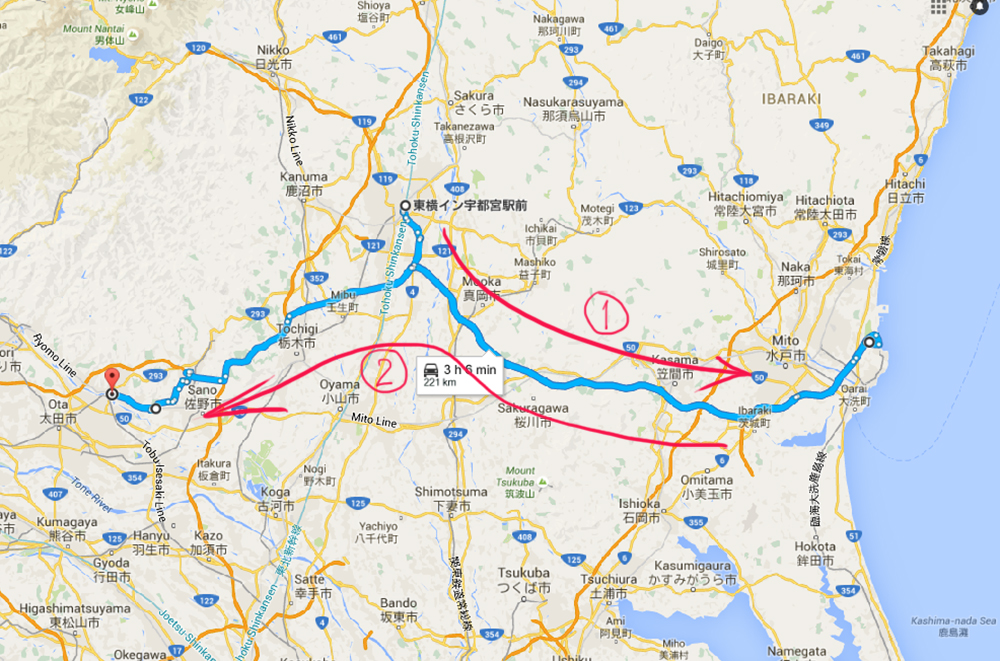 Both flower parks were very different and very beautiful. For Ashikaga Flower park we were misled by the inaccurate information posted on the park website and ended up missing the day visit. We only went for the evening/night visit

From our hotel to the seaside park was about 95 km and our journey took about 1 hr. The operating hour of the park was 9.30 am to 5 pm daily (close on Monday). The main attraction that drew me to listing this park as an must-visit item in our itinerary was its “hill-full” of Nemophila (baby blue eyes) that I had seen in several online pictures.

We parked our car (car park charge: ¥510) at the south car park and entered the park through the “Cho Gate”. The admission ticket was ¥1000 per person. The park was huge and I was not too sure if we should get two rental bicycles to go round the park. We were not too sure where was the bicycle rental kiosk located so we might or might not rent a bike. 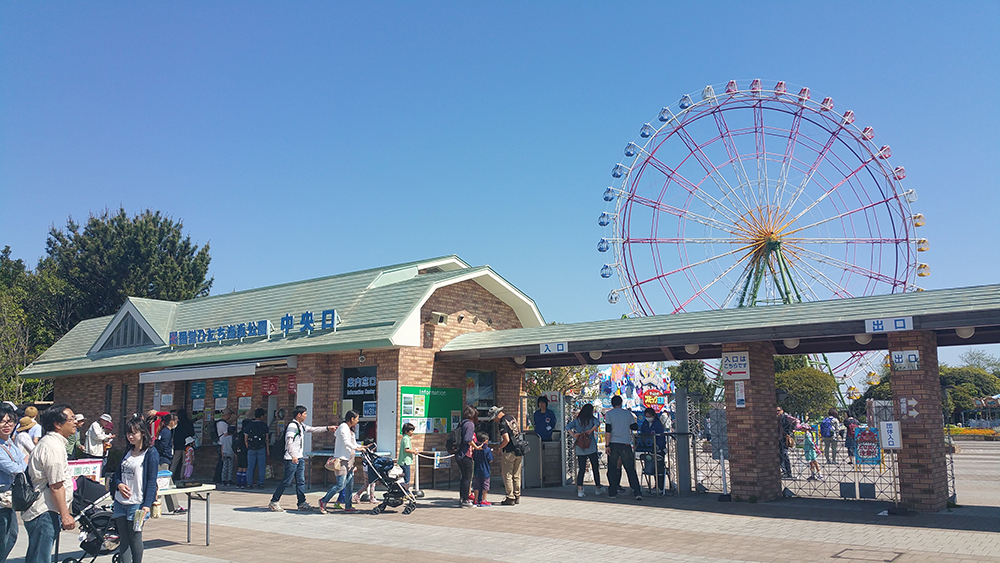 “Cho Gate brought us into the Pleasure Garden which was an amusement park for young children. We studied our brochure and walk north west towards the Miharashi Area. Along the way there several beautiful patches of orange flowers and red poppies. 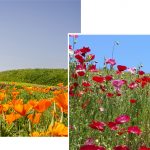 On our way from Pleasure Garden to Miharashi Area

Hitachi Seaside Park  was a public park, it covered an area of 190 hectares featuring different types of flowers in different months of the years. Its two main flower attractions were blue Nemophilia in late April to early May and red Kochia in early to mid October. 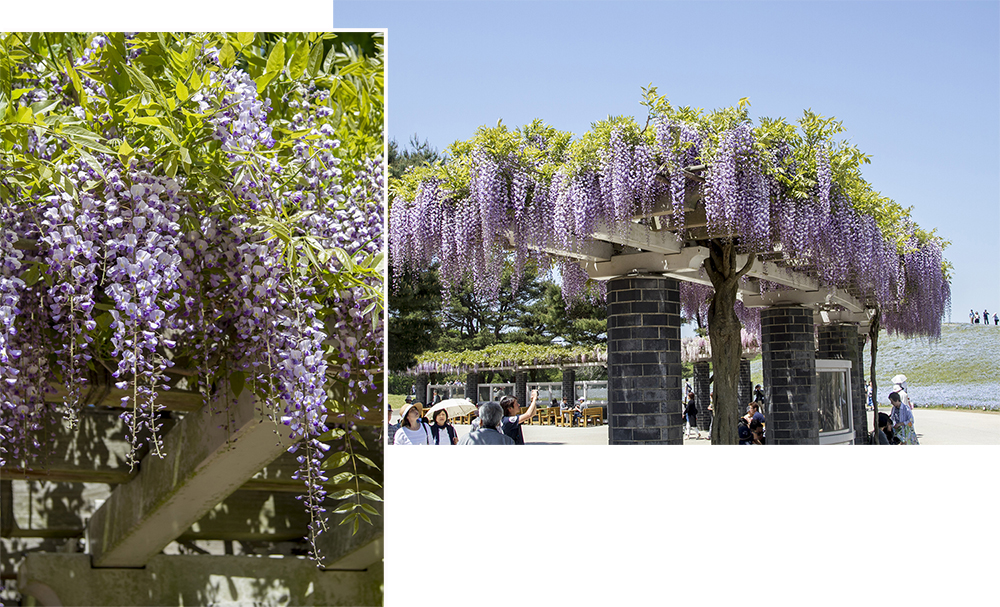 Wisteria Shade at a rest area in Hitachi Seaside Park

Though our primary focus was the Nemophilia at Maharashi Hills we kept getting distracted while we walked toward the hills. Before the hills there was a rest area with a lovely wisteria pavilion shade. The purple wisteria flowers were very beautiful and we could not resist but sat down to enjoy two ice creams (bought at a nearby stalls) and admired  the thousands of dangling wisteria flowers just above our heads and the millions of Nemophilia flowers on Maharashi Hills straight ahead. 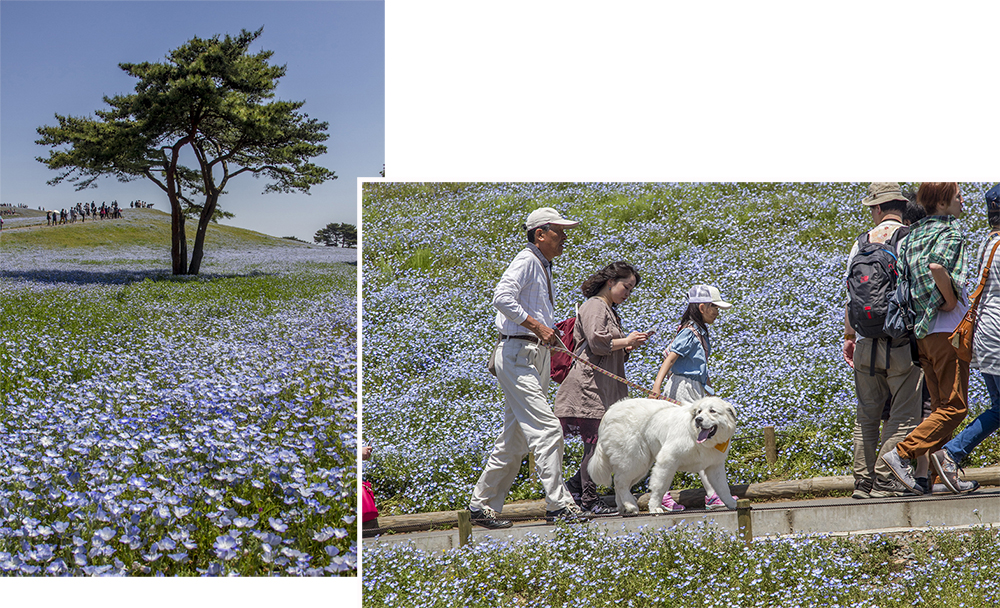 The Miharashi Hills were covered with a thick blanket of blue flowers. We seemed to be a bit late at this park. If we were here a week earlier the blue layer would have been thicker. 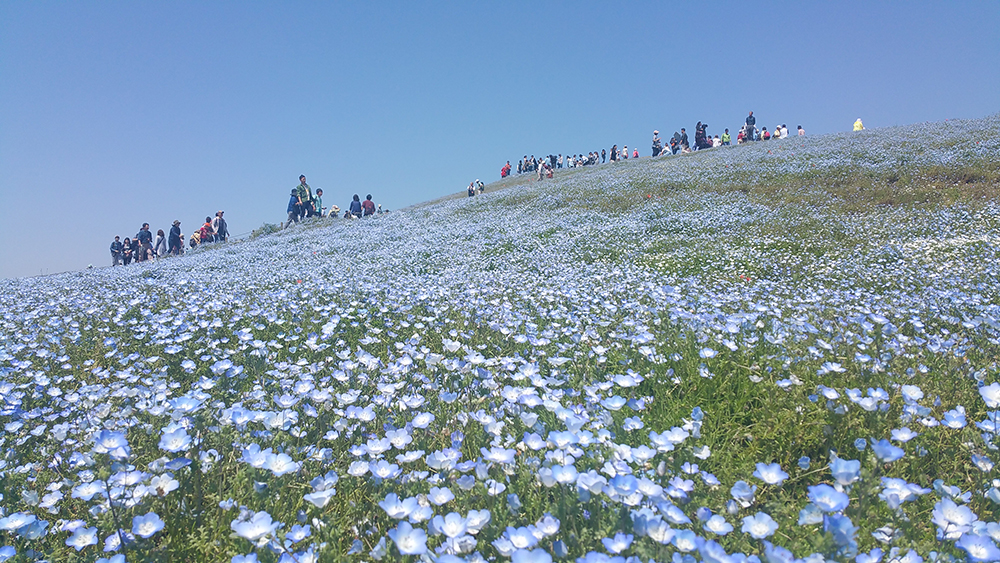 We left Hitachi Seaside Park at about noon and drove toward Ashikaga city which was only 130 km away. Our plan was to enter Ashikaga Flower Park at 5.30 pm for the evening viewing session and if we liked it enough we would be back at 8.00 am for the day session. 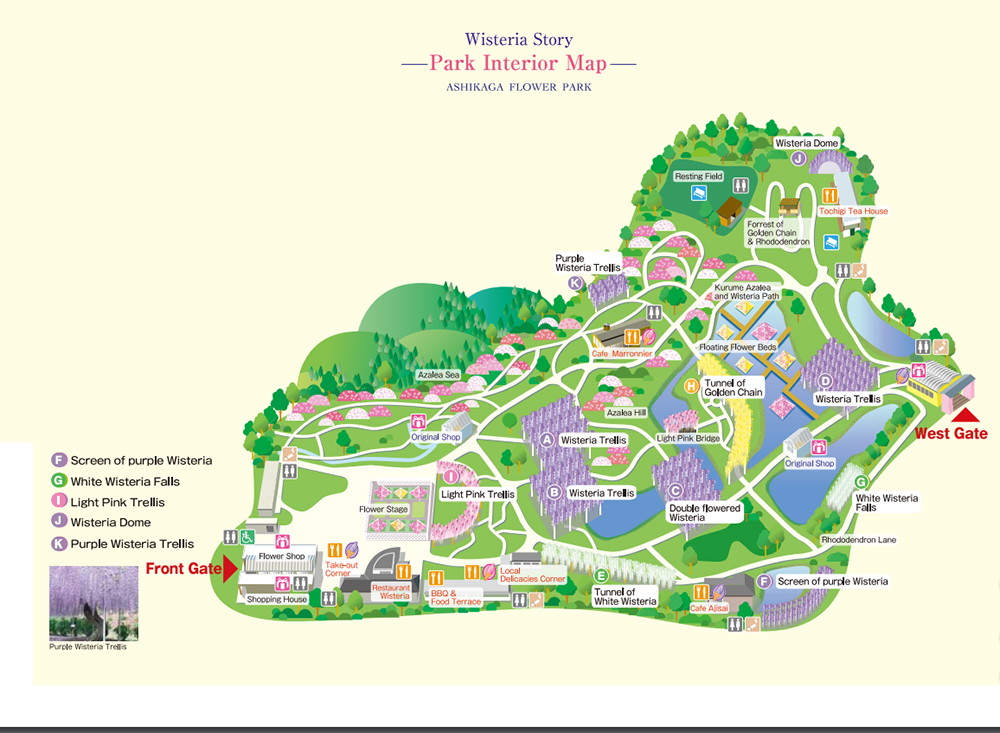 This decision was made because on Ashikaga Flower Park website it stated that Day session was from 7.00 am to 5.30 pm and evening session was from 5.30 pm to 9.00 pm. But getting into the park at 5.30 pm would left us only about one to two hours to explore the park in day light which might not sufficient. So coming back early at 7.00 am the next morning would give us plenty of time to explore the garden.

We timed our arrival to the park entrance at about 5.10 pm just a bit earlier that the entry time of the evening session. It was at the ticketing counter that we realised that the website information was totally incorrect.  Admission into the park from 7.00 am to 5.30 pm was ¥1300 per person and visitors with the day ticket could stay till 9 pm. Admission after 5.30 pm was ¥1000.

I checked the website again wondering if I had misinterpreted the admission terms written on the site. Well I did not! It was the website that had misrepresented the information. If gave the impression that visitors on the day tickets would have to leave the park at 5.30 am or purchase another tickets for the night session to stay in the park. I was told the park staff about the misrepresentation on the park website, I just hoped that they would make the correction for future visitors. 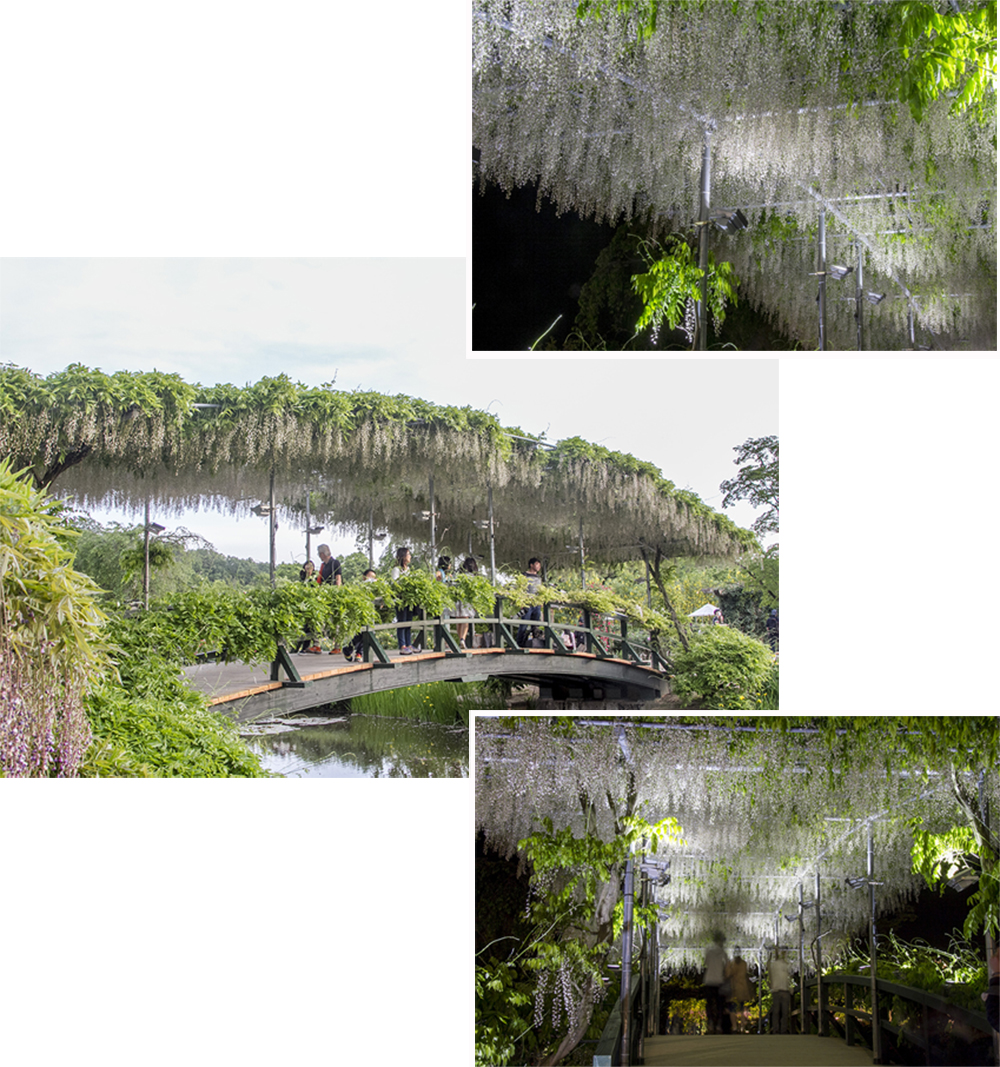 The park was huge and the wisteria varieties were more than those we saw at Kawachi Fuji Garden 10 days ago. Not all the flowers were at their best. Half of them had already started to wilt. There was never a best day to be at the park because some groups of wisteria bloomed earlier and other groups bloomed later. 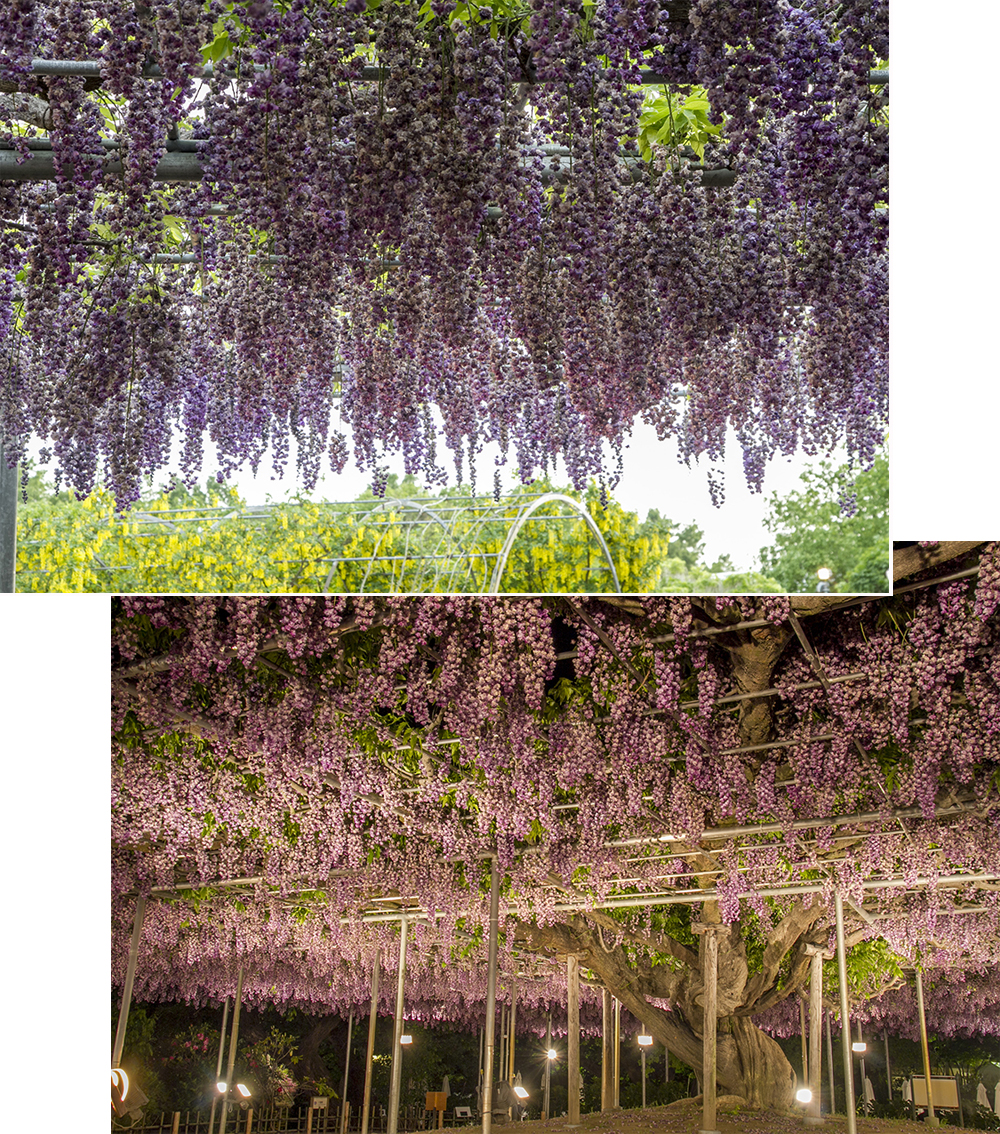 During this trip we had seen many wisteria flowers in the wild, but they never appeared as massive in abundance as those cultivated in the garden. Wisteria being a bine (not a vine) climbed up other trees in the wild so its flowers were “jumbled” up with other foliage. In the garden, wisteria trees were carefully supported on trellis which allowed their flowers to dangle down beautifully unobstructed. 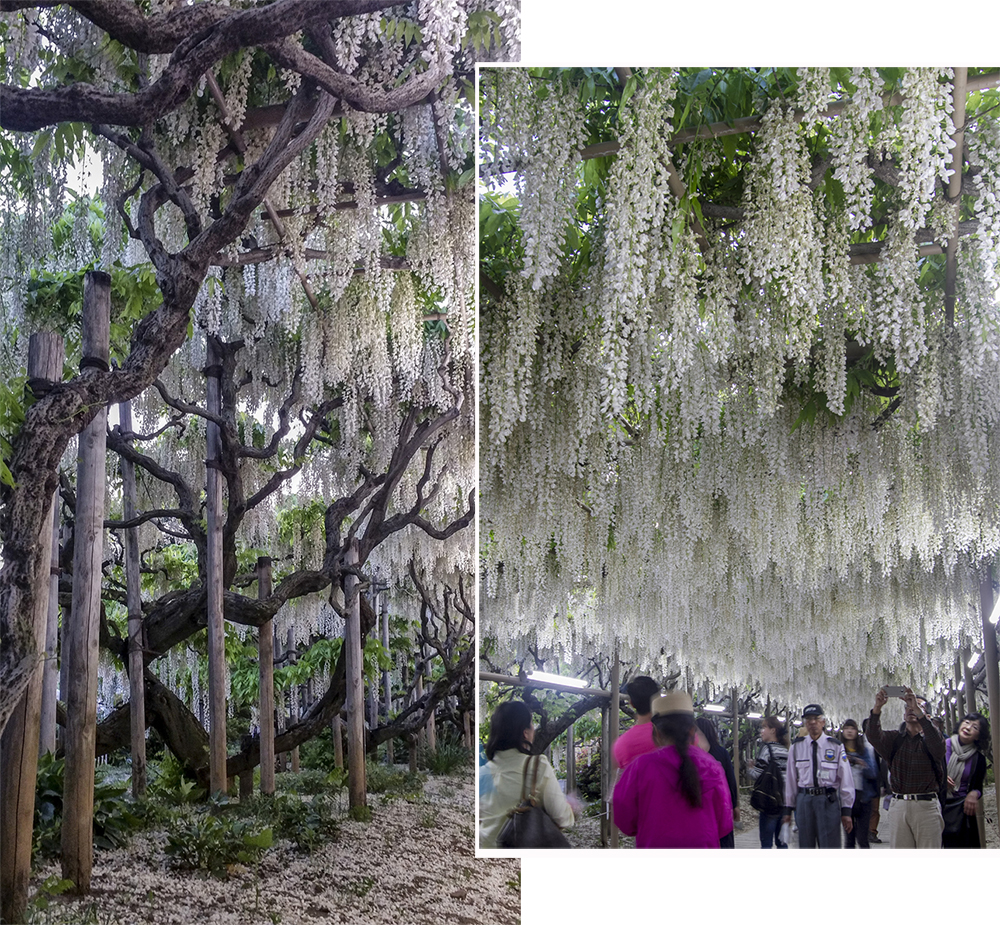 When the day light went out and the night lighting came on, the wisteria flowers looked even more beautiful then they did under the sunlight. In Ashikaga Flower Park each trellis held only one type of wisteria, so one uniform color. This uniform color appeared very well under the night lighting. From afar, the pink wisteria trellis looked like glowing silk string curtain, so sweet. 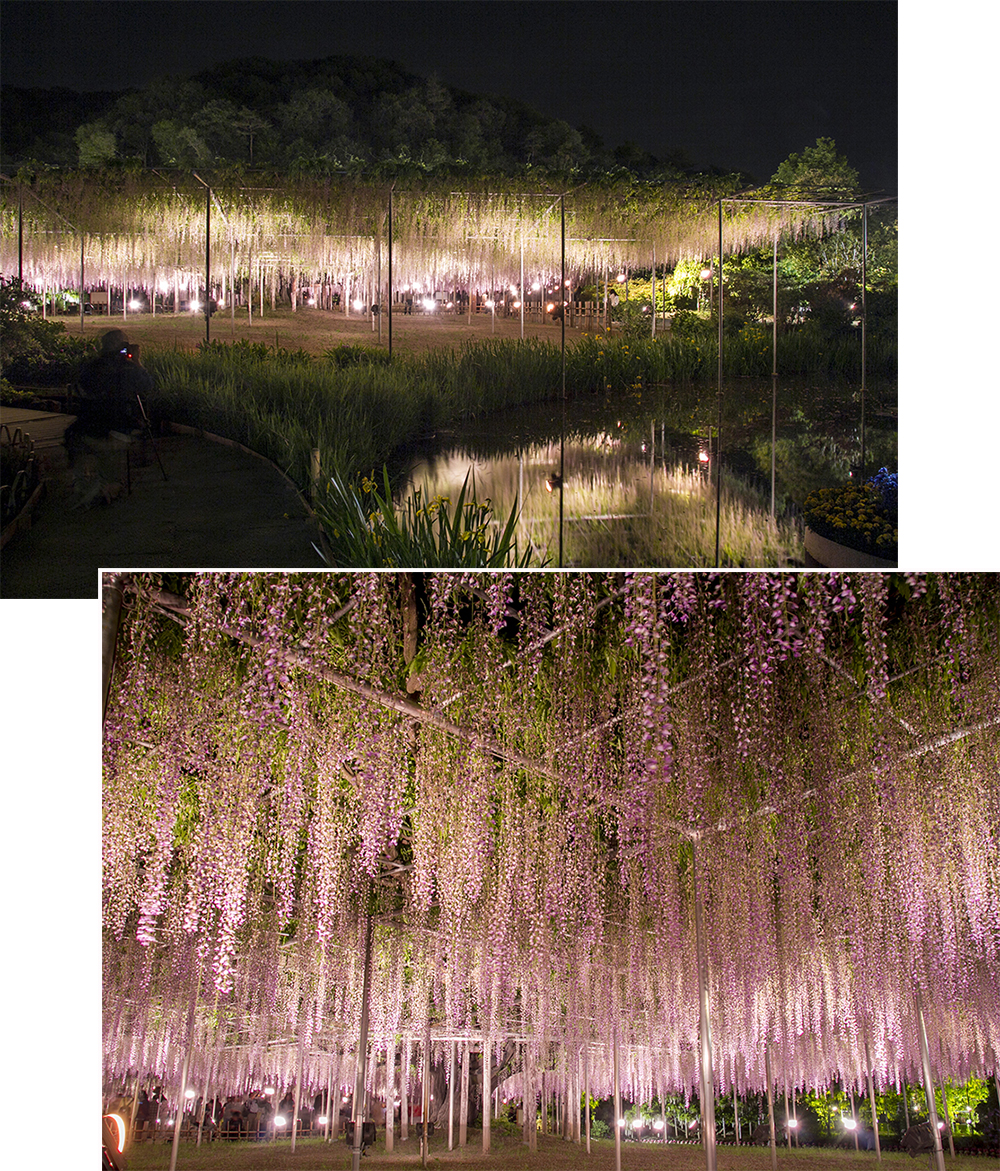 We were more appreciative of the water landscapes in the garden as their presence had enhanced the beauty of the lighted trellis double fold. Double pink, double white, one above and one in the water… absolutely stunning! 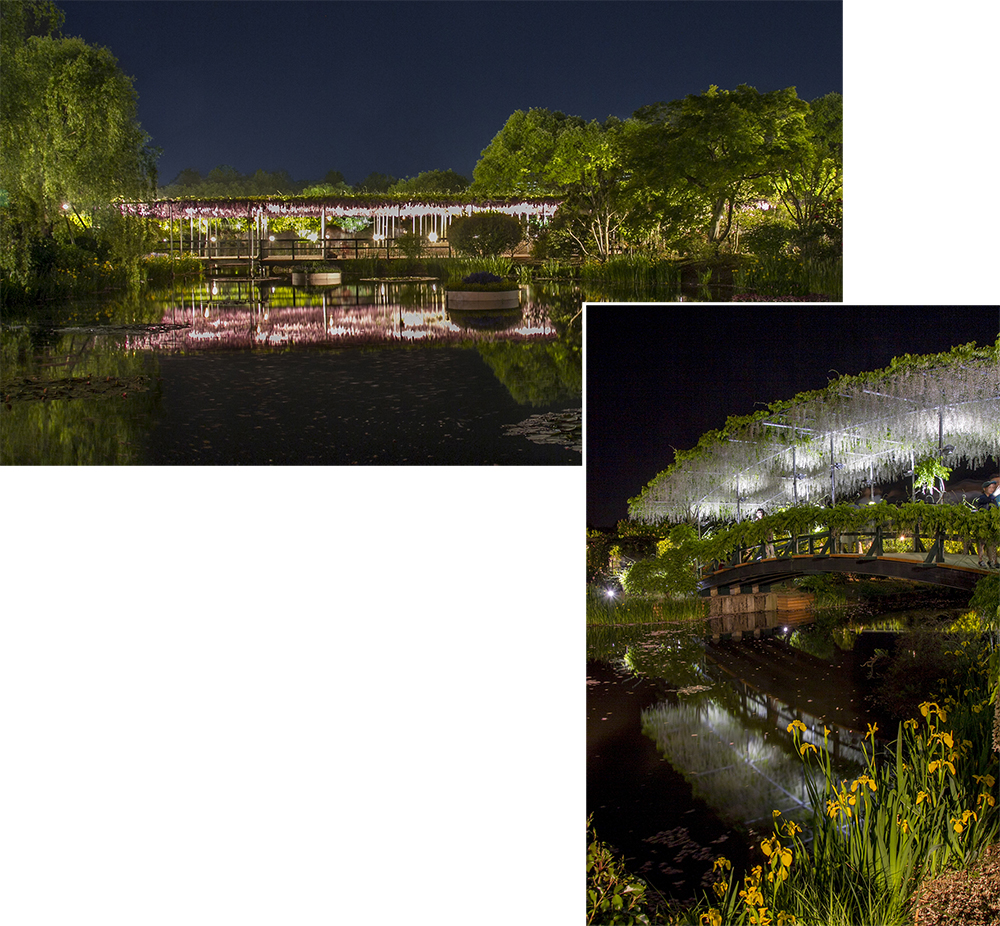 Wisterias in a landscape garden

Our hotel was another Toyoko Inn, this time Toyoko Inn Tochigi Ashikaga. We purposely chose to stay in Ashikaga city because we expected to come back late from our night viewing of the wisteria flowers. The distance between Ashikaga Flower garden and our hotel was only 7 km and we took 10 minutes to get back to our hotel.

The cost of a twin room at the hotel was ¥6480 and parking was ¥300. The hotel charges in Ashikaga city seemed to be relatively cheaper than other regions. We loved coming into a room that looked so familiar, after all this was our sixth Toyoko Inn. The room layout, bedspread, clock, TV, wall mirror down to the bedside lamp were all similar for all the six rooms. The only thing I was now dreading was the breakfast. It would be monotonously similarly! 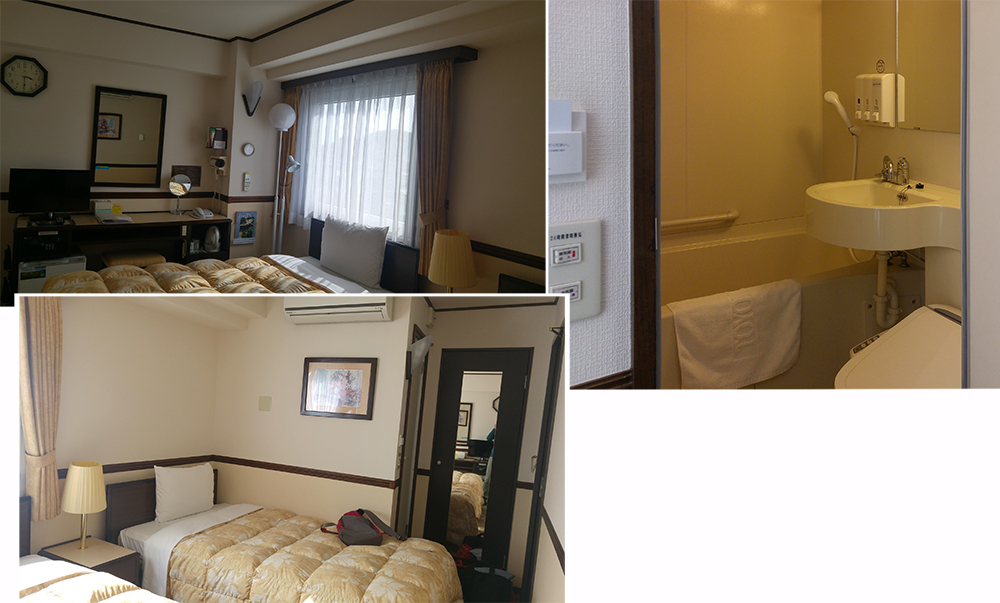