Our plan was to drive all the way from Hiroshima to Fukuoka today. The entire journey would be about 300 km and even if we did not stop anywhere it would take us 4 hours to reach Fukuoka. We planned for one short stop at Iwakuni Kintai-Kyo Bridge which was 46 km from Hiroshima. At Fukuoka we would visit Fukuoka Tower and Canal City which was very near our hotel for the night. 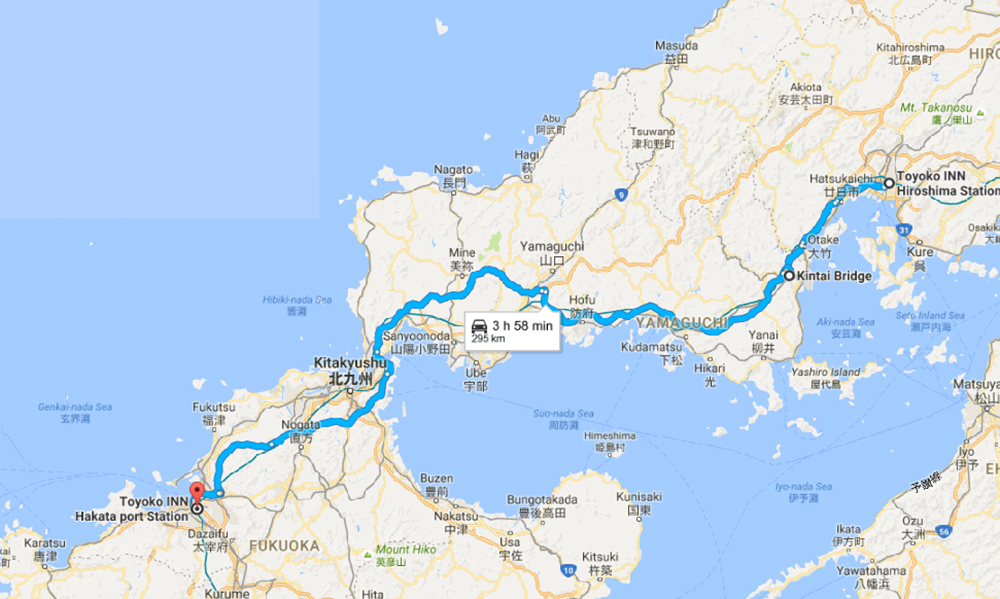 Our short stop at Iwakuni Bridge became a long stop. There was actually several interesting sights in the vicinity of the bridge which included a ropeway and a castle on a mountain top.

The drive to Iwakuni Bridge was just 45 minutes over a distance 48 km. Near the bridge we were directed to a huge gravel car park. This car park was just along Nishiki River, it could be part of the river bed which was dried at this time of the year. Interesting we had arrived on the day of “Bridge Drawing” competition day. Many families were sitting near the river on both banks painting the bridge. 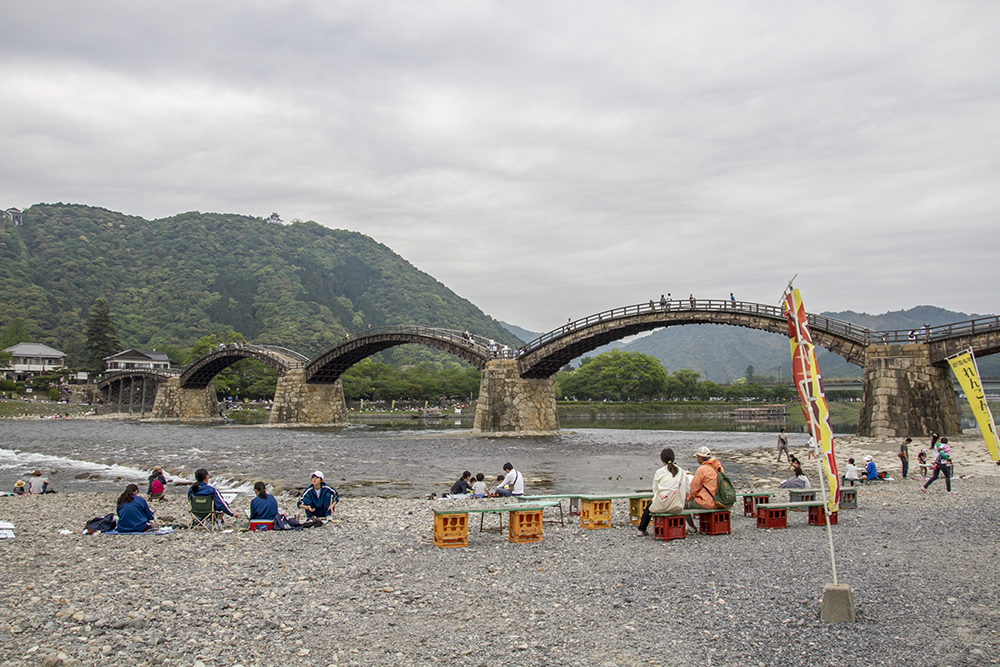 Kintai-Kyo was a beautiful five arch wooden bridge sitting on massive stone pillars. It was 193 metres in length and 5 metres wide. From far the bridge resembled the body of a Chinese dragon. Standing nearer to the bridge still on the river bed we could see the underside of the bridge clearly, it was an impressive network of wooden lattice. 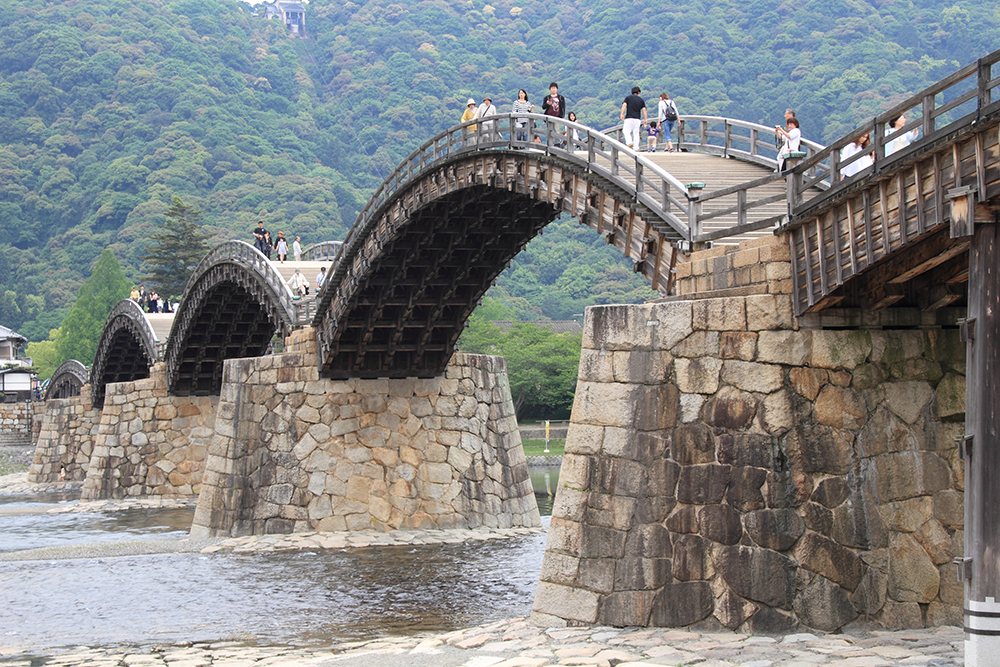 Kintai-Kyo was constructed in 1673 to replace a bridge which was destroyed by strong current in the Nishiki River. This durable bridge stood for the next 300 years (1673 -1950) before it was destroyed by a violent typhoon. It was reconstructed precisely to its old dimensions three years later and today it was an important tourist attraction of Iwakuni Town.

On one bank of the river, river boats were available for those that would like to take a boat ride.

On the mountain across the bridge we could see a castle. So far all the castles that we had visited were always located in a city. This was the first castle that was located on such a high ground (Mt Shiroyama), the castle looked as though that it was built to overlook the town and to protect the town from aggression.

I would love to visit Iwakuni Castle and to look down at the town from its top level, the view must be majestic. The thought of trekking up to the castle was unthinkable so we dropped the idea of visiting the castle. 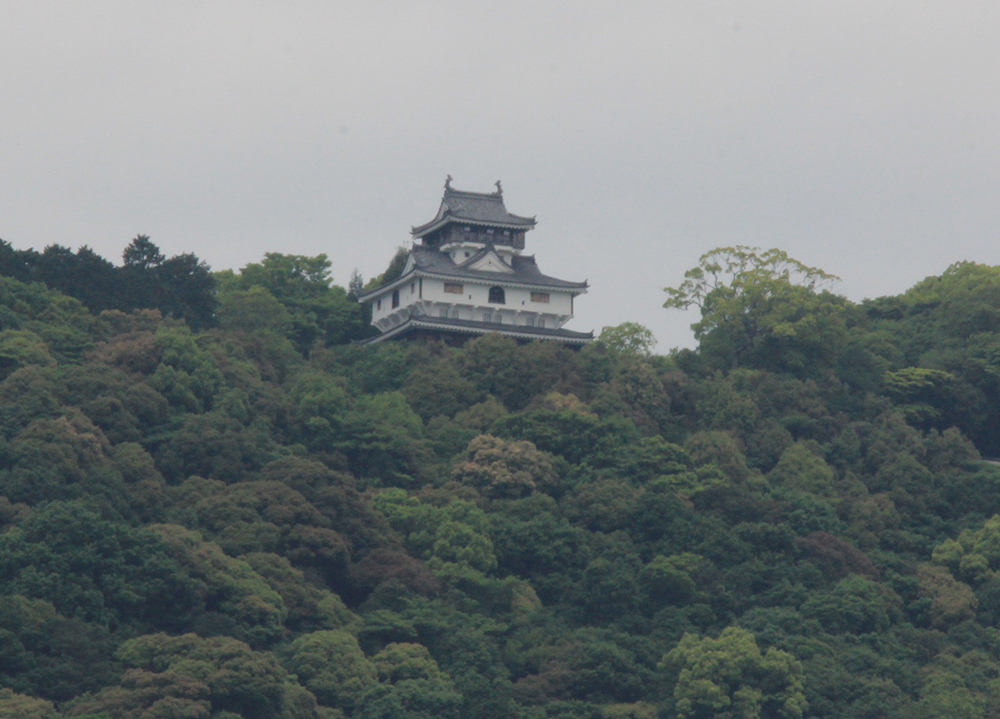 We left the riverbed and walked up to the start of the bridge, we were preparing to cross it when we saw a “no entry” sign. Going onto the bridge needed an admission ticket! We were not too keen to pay a fee for walking over the bridge and back. Anyway I approached the ticketing counter just to the check the price. Kintaikyo Bridge entrance ticket was ¥300 per person. There was a combo ticket of ¥940 per person that included the bridge entrance, round trip on the ropeway to the mountain top and admission to Iwakuni Castle. 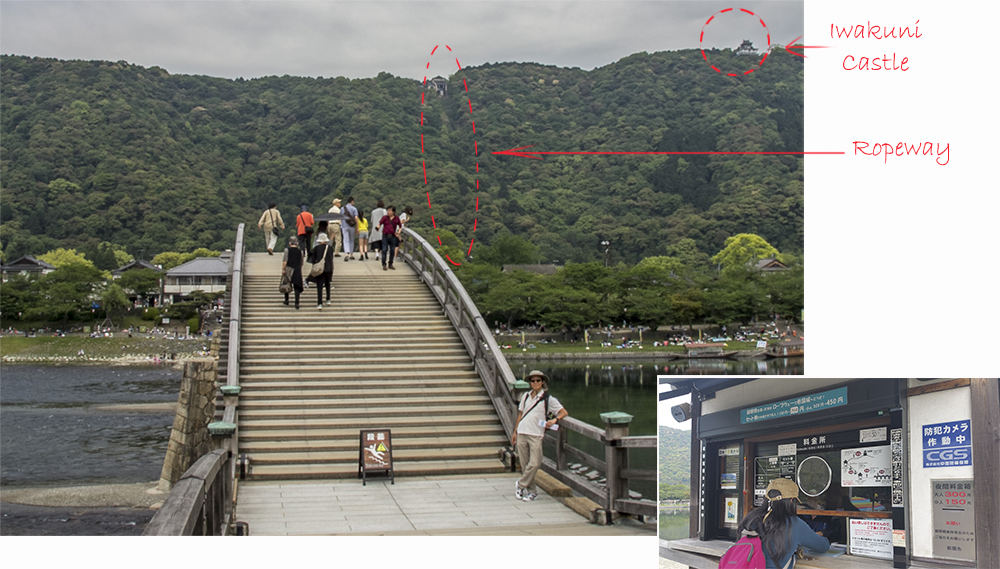 We did not mind paying more for the combo tickets as they gave us a good reason to cross the bridge. “Iwakuni Castle, here we come!”  We crossed the bridge, going up and down each span. The bridge brought us to Iwakuni park, this used to be the residences of the ruling Kikkawa family. Kikakkawa Hiroyoshi, the third lord of Iwakuni was the man who initiated the construction of Kintai-Kyo bridge.

The park was packed with children and their families and we saw many freshly drawn pictures of the bridge on display. On our way to the ropeway station we walked past a couple of museums. 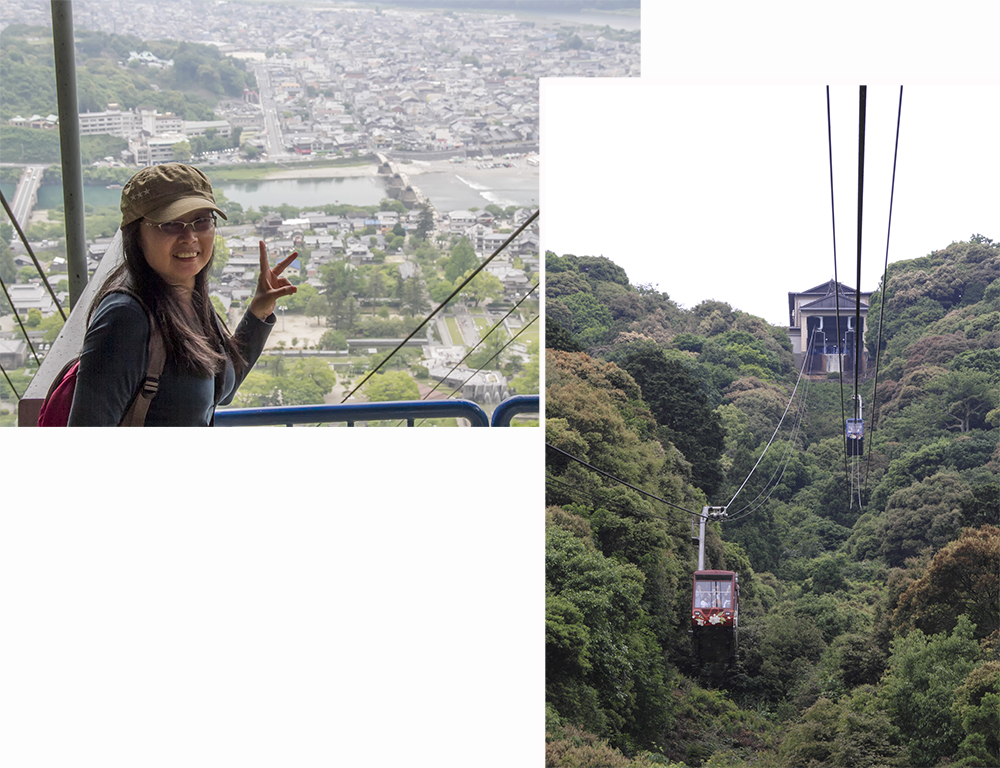 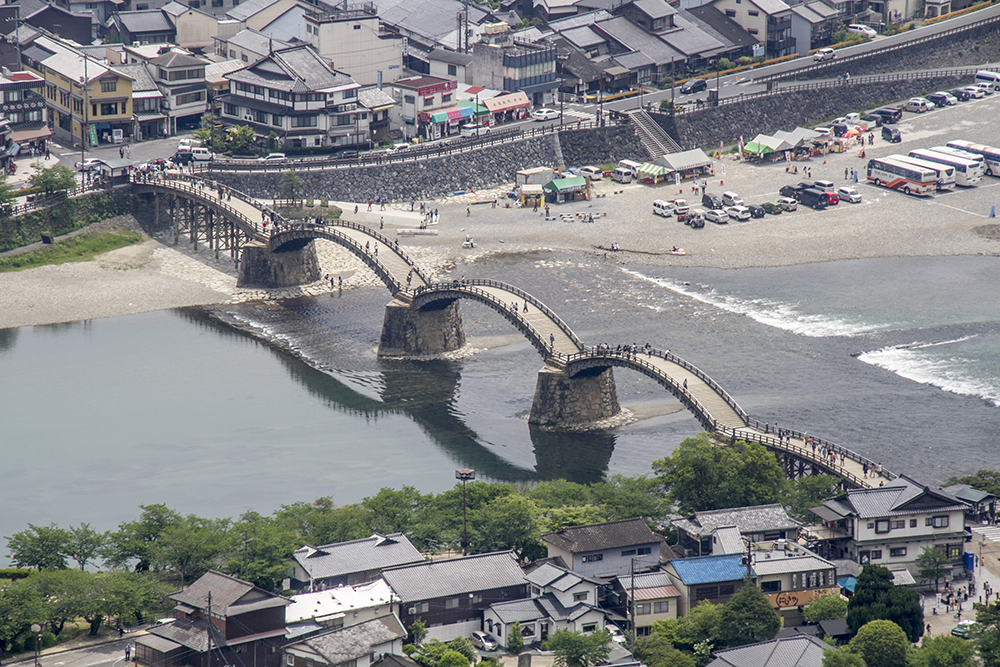 Aerial view of the Kintai-kyo bridge

From the upper station of the ropeway we walked for about 20 minutes to reach the castle. There were two main routes. One was shorter but had to climb up a long flight of wooden steps and another was a longer path that curved up to the castle. The walk was very pleasant as the air was fresh and cool. 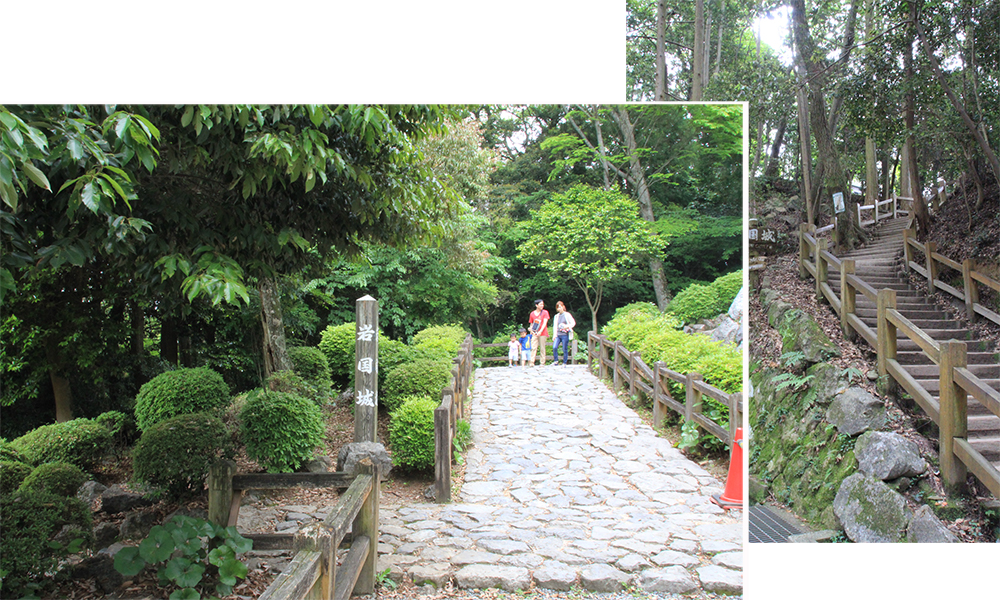 Path from ropeway to Iwakuni Castle

Iwakuni Castle was a small castle with four levels. It sat on top of a foundation of large boulders. The castle was first built in 1608 on Mt Shiroyama because of its high vantage point. It took five years to construct but after seven years it was dismantled as the Shogun wanted the castle next to a river. At that time one province was only allowed to have on castle, so it was either a castle on top of Mt Shiroyama or one near the river.

This Iwakuni Castle was reconstructed on Mt Shiroyama in 1960. 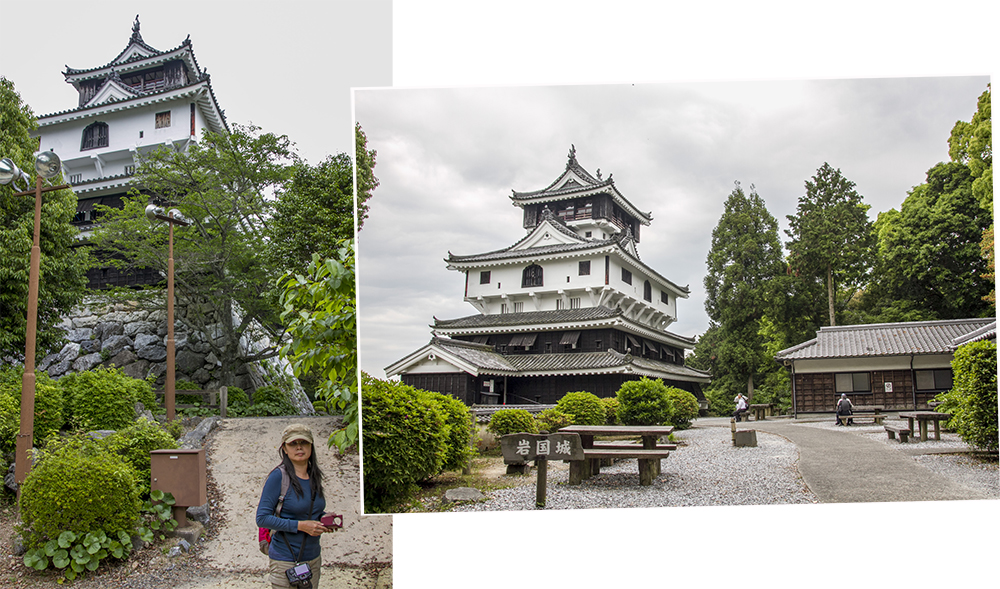 Today the castle was used as a museum for samurai swords, suits of armor and weapons. There was a number of sword displays, in glass cabinets with English information. There was also a small replica of Kintai-kyo bridge 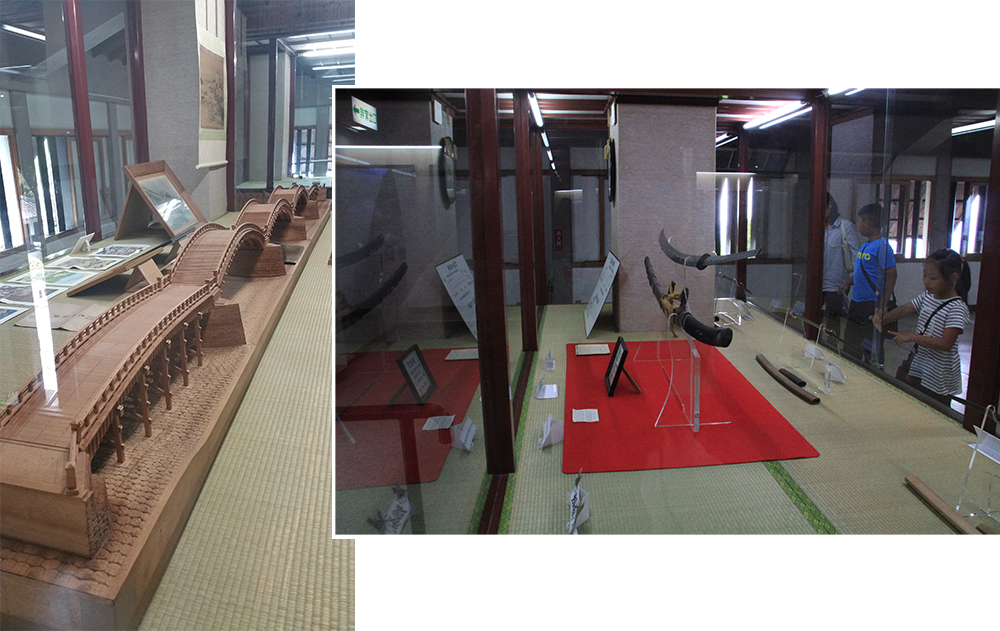 The first three levels of the castle were for exhibit displays. We walked slowly from one exhibit to the next but after seeing a couple of samurai swords we got bored and skipped past several other sword exhibits. Each sword looked similar to the other and the history related to each sword was not exciting eiither. We zoomed up to the highest (fourth) level of the castle to get a panorama view of the city below. The houses and the bridge were so tiny and we could see very far and wide. 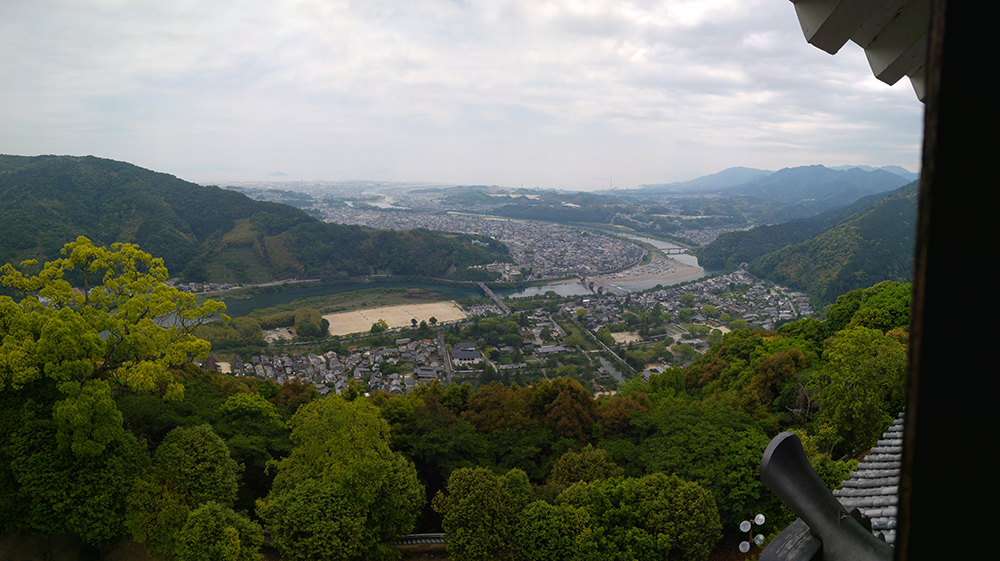 Panorama view of Iwakuni City from the castle keep

It was suppose to be a short stop at Iwakuni just to see the bridge and we thought 30 minutes would be more than enough. Well, our stop at Iwakuni was 3 hours, so much longer than our expectation but definitely time well spent.

We drove 250 km from Iwakuni to Fukuoka travelling on the tolled expressway. The toll charge was ¥4370 and the journey took about 3 hours. If we were to drive on the normal road to avoid paying toll we would need about 4 and a half hours.

By the time we reached Fukuoka it was already 5 pm so we decided not to visit Fukuoka Tower and to drive straight to our hotel for the night. Fukuoka tower was just an item I included in our plan to “kill” time as I thought we would be arriving in Fukuoka in the early afternoon.

From our hotel to Canal Mall was 1 km rather than to drive or take public transport, we walked to the mall. Canal City Mall was huge and PINK. It had a canal flowing through the mall and its building design was very modern and futuristic looking. 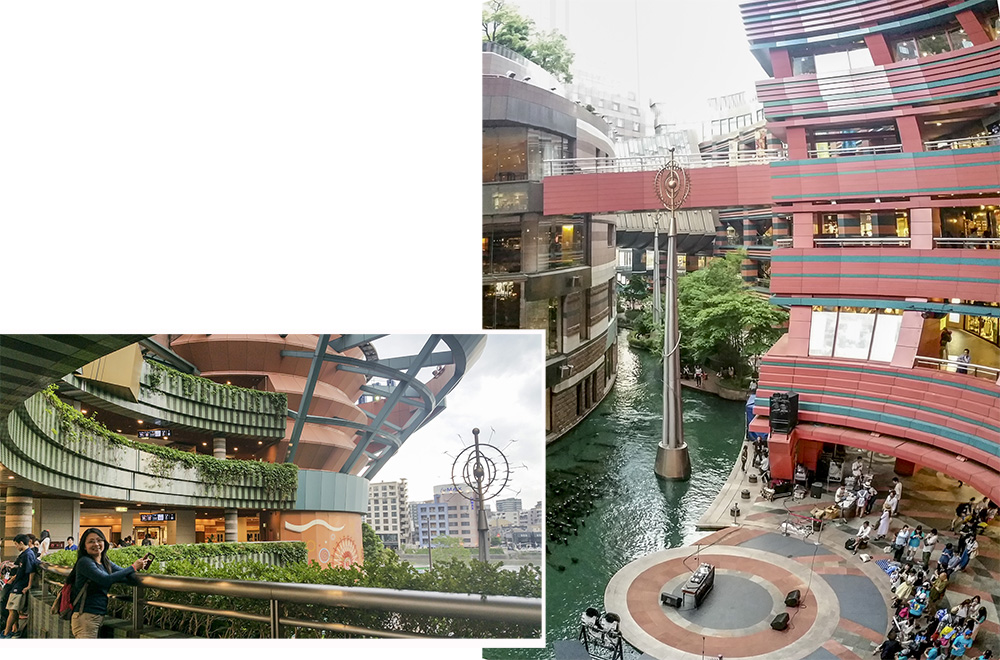 The mall was a large shopping and entertainment complex. There were shops, cafes, restaurants, theater, game center, cinemas and two hotels. At the center of the mall beside the “artificial canal” was a stage. It was crowded with people enjoying a singing performance. 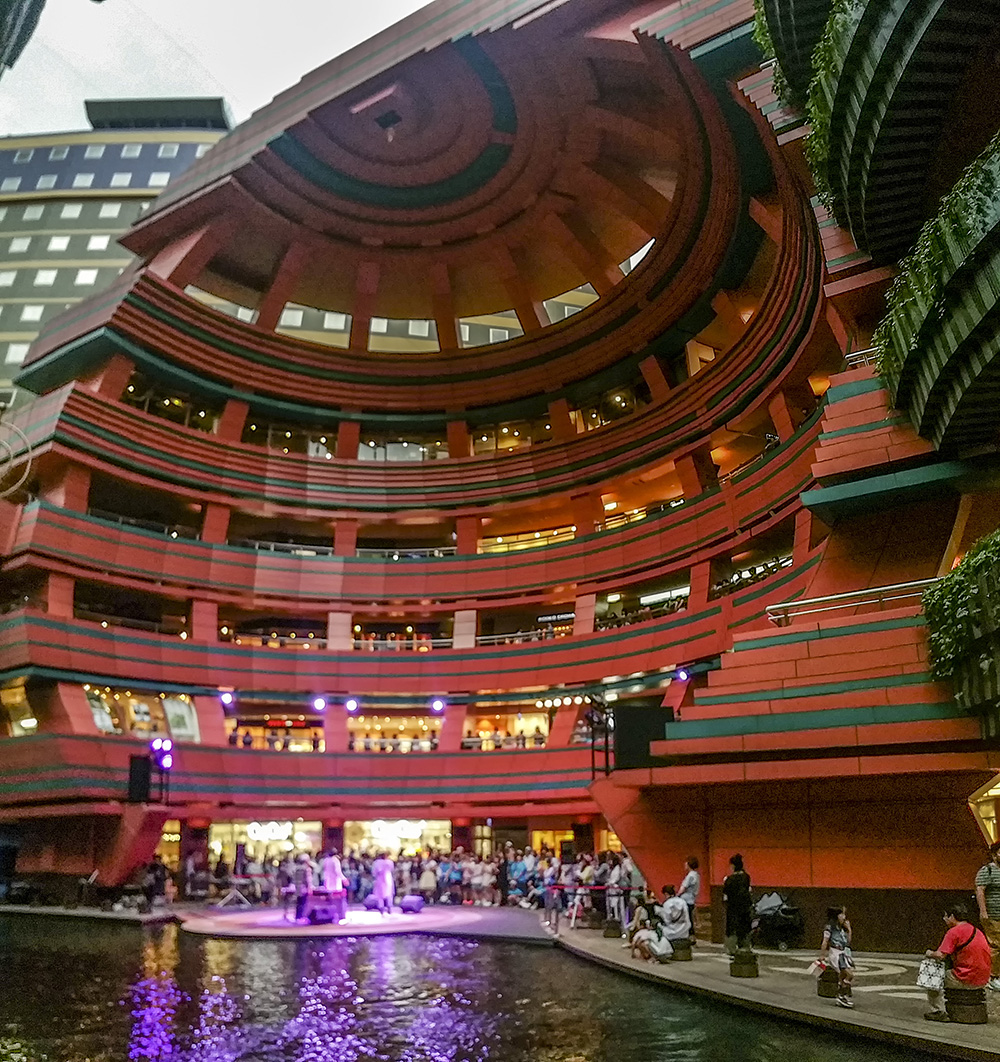 We went back into Canal City and went up to the fifth level “Ramen Stadium” for dinner. There were eight ramen restaurants offering ramen from different parts of Japan. We had no idea which to choose, so my “motto” was to go for the one with the longest queue.

Ramen in Japan were so much cheaper when compared to those in Singapore. Even the most expensive ramen in the shop was still cheap. Once we were seated we ordered the best ramen (most expensive) in the house. 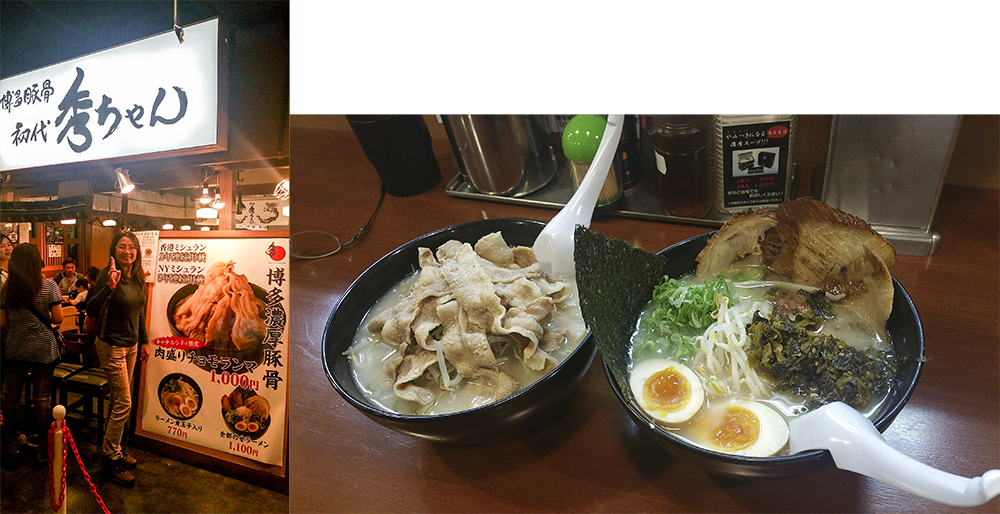 Our hotel was Toyoko Inn Hakata Port Station 2. Tonight stay would be partially free. As member of Toyoko Inn club after collecting 10 night stays we would be given a free one night stay (single room). Tonight was my free night stay. (I had collected a 1 night stay from a previous trip and a 9 night stays for this trip).

Since we needed a twin room, all we needed to pay was the outstanding balance after deducting the cost of a single room from our twin room fee. So Instead of ¥6912 for the room we paid ¥2700. Parking was expensive at the hotel, it was ¥1000 per night.