We did not fly straight into Christchurch, instead our flight journey was broken into two legs. Singapore to Melbourne and Melbourne to Christchurch using separate airlines. The flight costs using one or two airlines were comparable so we chose two as we decided to visit some relatives in Melbourne on our return journey.

I had completed online check in for both Jetstar flight (Singapore to Melbourne)  and Air New Zealand flight (Melbourne to Christchurch) the day before and had gotten our seats and boarding documents without any issue. So it was shocking when I received an email that morning informing me on the cancellation of our Jetstar flight. I hated to think what would be the situation like if I did not read my email in the morning. Would that meant I would only be told about the cancellation at the airport?

I called Jetstar customer service and was told that they had put us on the same flight the following day. In my mind I was wondering if Jetstar was trying to combine two half filled flights into one to save cost. Anyway I told the customer service firmly that the delay would cause me to miss our 2nd flight to Christchurch and I would have to cancelled without refund three nights of accommodation. It was only on my insistence that he found us a better alternative. We were offered seats on Qantas Airline flying out at midnight the same day. So instead of reaching Melbourne at 7 am the next day we reached Melbourne at 10 am and had plentiful of time till our next flight at 6.35 pm.

The second leg of the flight journey was about 3 plus hours which would have been more bearable if we had some forms of inflight entertainment. Unfortunately due to my oversight I forgot to pre-install Virgin Inflight Entertainment Application on my mobile phone prior to boarding!

Though there was wifi on board, it only allowed me to tap into the inflight entertainment website which was not possible because I had not installed the required application. I thought Virgin Airline was very innovative in implementing an inflight entertainment solution that utilised the passengers’ mobile devices. Unfortunately this solution became a “white elephant” when majority of the passengers came on board without the required application on their mobile devices.

Though we were on a Virgin Aircraft, I did not buy our tickets from Virgin Airline. I bought them from Air New Zealand. I thought that since these tickets were purchased from a non-budget airlines and at a higher price, the flight package would include check-in luggage and meals on board. Well, check-in luggage (23kg per person) was included but there was no meal.  I was sure that when I made the online purchase, nowhere was it indicated that meal and refreshment needed to be purchased separately!

Getting a traveller data SIM Card

We landed in Christchurch airport closed to midnight. Once we stepped into the arrival hall just after the custom, we zoomed into SPARK (telco) counter. The VODAFONE counter was just next to it. We had decided to get a traveller data sim card ($49) from SPARK because it seemed to offer more in the package. Beside 3G of data, the SPARK mobile plan came with some talk time (200 minutes domestic and 200 minutes international), some texts (200 domestic and 100 international) and free wifi at 1G/day. As for VODAFONE, the mobile plan ($50) was limited to just 3G of data for a month. 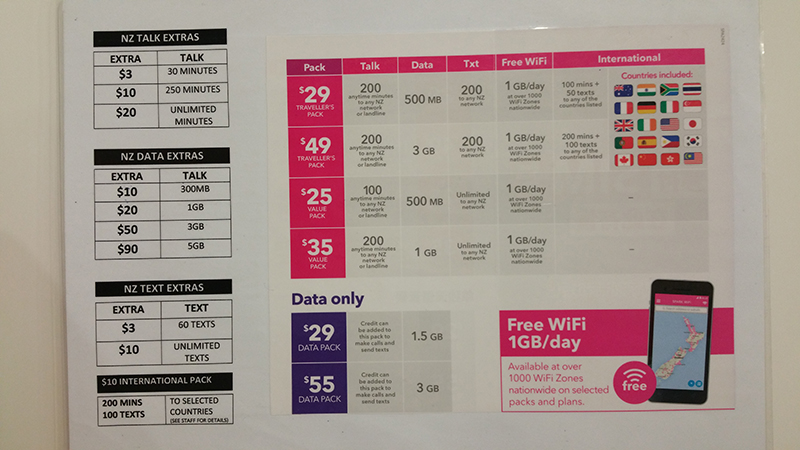 Our purpose of getting the sim card was purely for its data service, so either SPARK or VODAFONE was fine. Our decision to pick SPARK was because it seemed to be more value for money. Who knows, we might eventually use the free talk time and text messaging that came in the package.

I had read online that both SPARK and VODAFONE had comparable network coverage in New Zealand so picking SPARK over VODAFONE should be okay. I guessed I would know by the end of the trip if I had made the right choice.

I knew we would get into Christchurch pretty late, so we would need a hotel that was very near the airport. I had found several hotels near the airport and finally settled with Airport Gateway Motor Lodge because it was less expensive and it provided free 24 hour airport transfer, two ways.

At the airport we found our way to the “free phone” area where I dialed “26” to get in touch with Airport Gateway Motor Lodge and informed the lodge receptionist of our arrival. 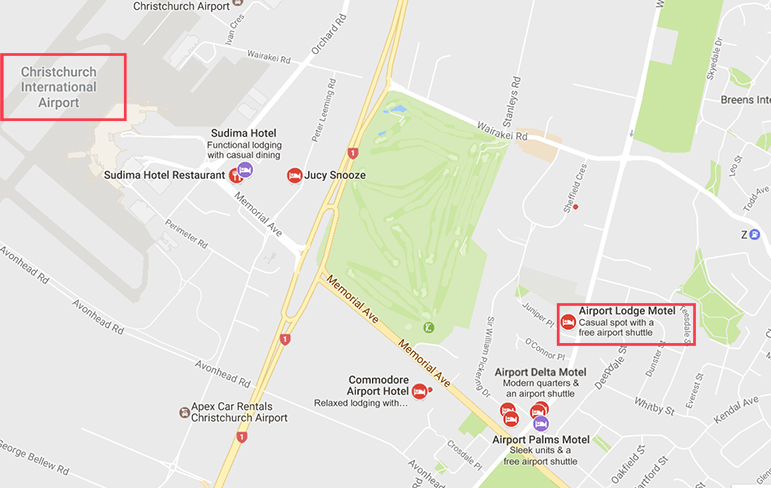 Christchurch International Airport and the hotels in its vicinity

Prior to booking our accommodation at Airport Gateway Motor Lodge, I was concerned about it not being as near to the airport as some other hotels which would mean a longer transfer time to the lodge. This concern was totally irrelevant because our airport pickup arrived in just 5 minutes after we placed the call. The lodge van was already waiting for us at the pickup point even before we walked right up to it.

The driver was a very friendly guy, when he found that we were hungry he detoured into MacDonald drive-in for us to pick up two burgers. The journey to the motor lodge was done in another five minutes. At the lodge, our room was already ready and we just walked in directly leaving all check-in paper work to the next day.

The room was large and welcoming. It had some sort of a walk-in kitchen at one end.  The room deco was modern and lovely. The toilet was clean and large with shower and bath. It was a pity that we were leaving early next morning and would not be able to enjoy the comfort of the room for a longer period.  I booked our room online with Expedia and the cost was NZ$143.10 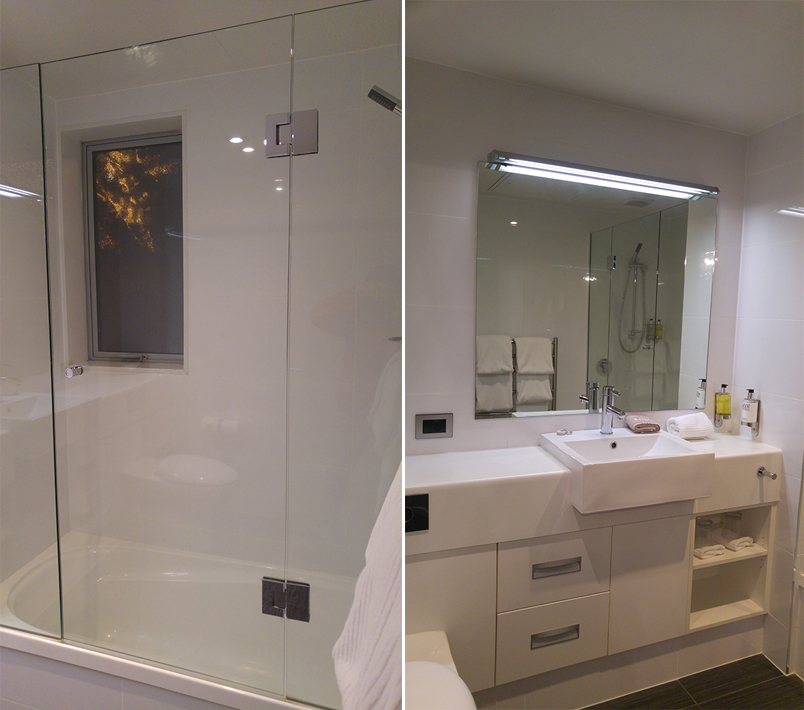