For the morning we planned to explore Lake Rotoiti and its surrounding. In the early afternoon we would travel north toward Golden Bay to finally end at Wharariki Beach. The journey to Golden Bay would take about 3 hours so we planned for two stops, one at Motueka Town and another at Te Waikoropupu Springs. Between Motueka Town to Te Waikoropupu Springs we would drive over Takaka Hill which we understood was a scenic place. 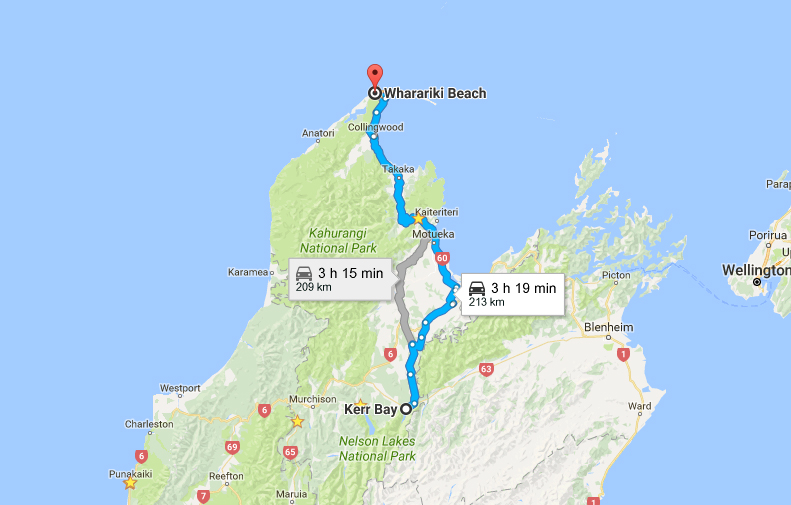 We finally reached Golden Bay, Wharariki Beach at about 5 pm. The day started fine, nice and sunny but at about 4 pm it began to rain. So again like the previous day, it was another wet late afternoon/early evening.

Whipping up our breakfast

In the morning we had the whole huge kitchen to ourselves again. We thought we might meet the Singapore couple we saw last eve but there was no sign of them or any other people.

I cooked two packs for Korean instant noodle and added a whole can of cooked tuna. We had a lovely breakfast in the shared dining room. The kitchen was very well equipped, everything I needed to make a meal or a drink was available. 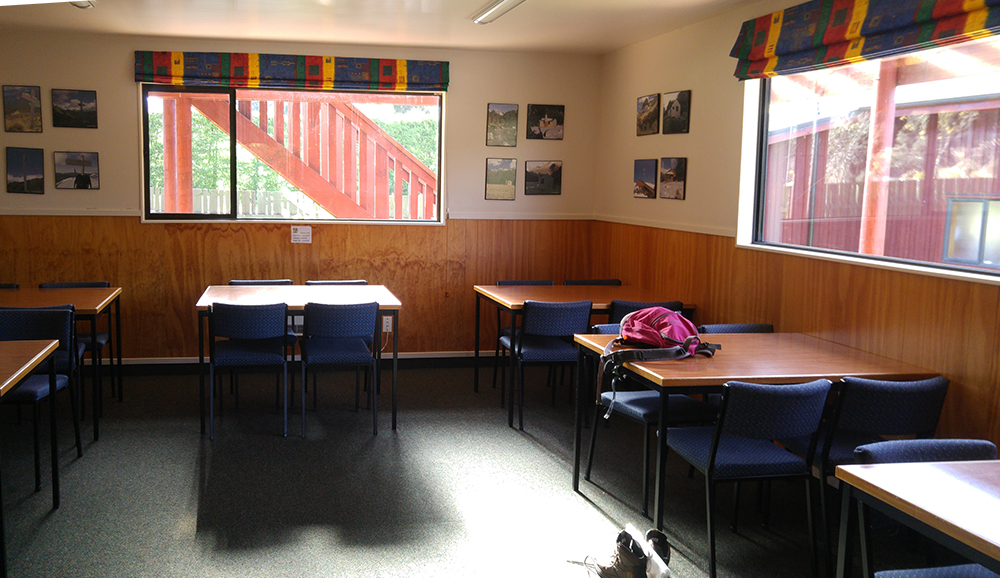 Big dining room at the lodge 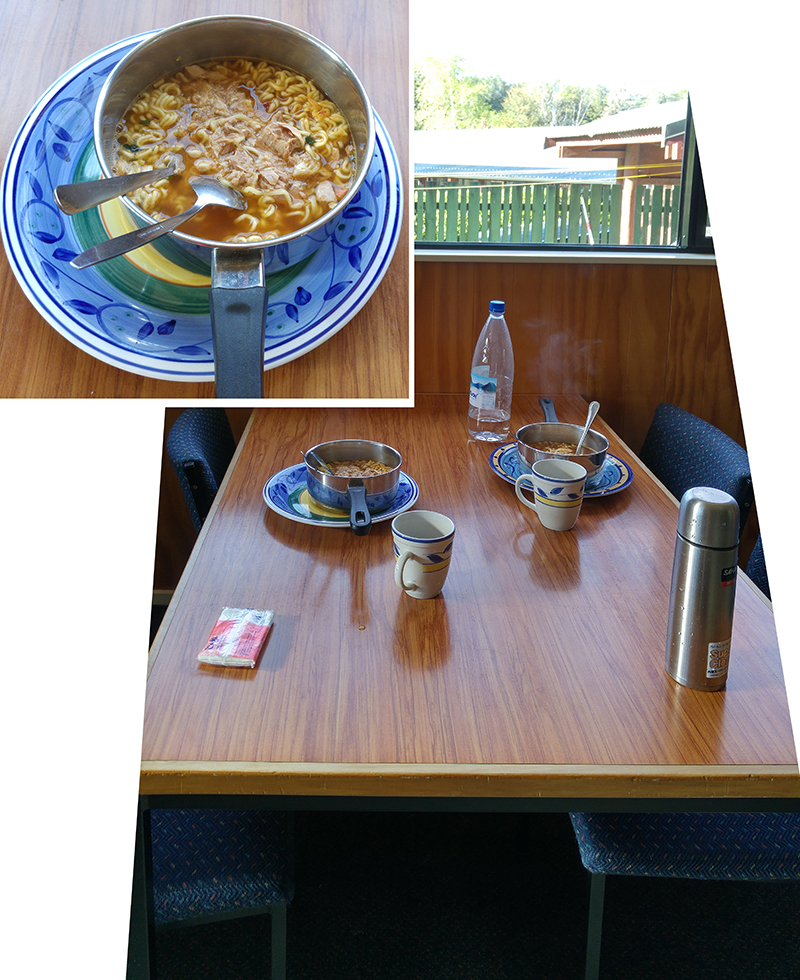 We went back to Kerr Bay again in the morning, this was our third visit. The sky was clear and the mist had lifted. At the lake we could see the mountains with their snow capped tops at the far end of the lake. The lake was huge.

Kerr Bay looked so very different from the evening before. This morning it seemed so alive and cheerful, cool and yet sunny. The gentle wind created ripples on the water surface and these ripples shimmered in the sunlight. Beautiful. We could not resist but to walk the full length of the jetty again, getting as far out into the lake as possible. 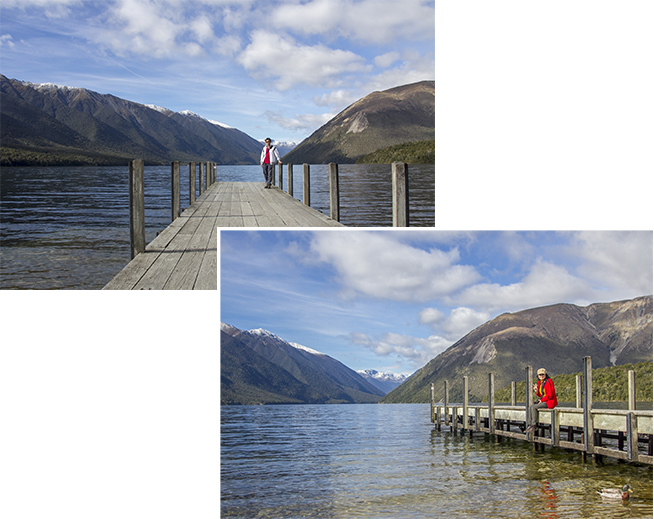 I remembered a lady-receptionist at the lodge told us to look out for eels in the water under the jetty. Whenever I thought of eels I imagined small slim unagi  (Japanese eels) that we loved to eat. As we stared into the water we saw many dark shadows and then we realised that they were huge eels, many of them, swimming under the Jetty. These eels were huge, at least a meter long. They looked scary and I would not want to be in the water with them. 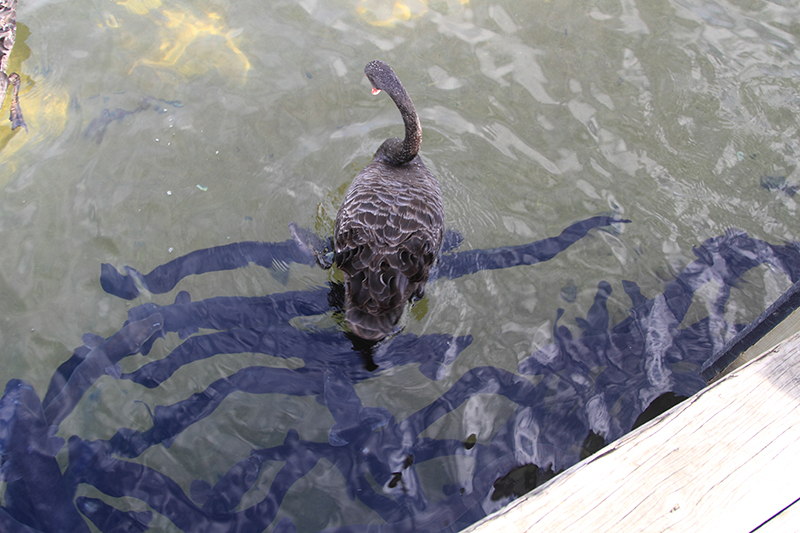 Huge Eels living under the Jetty

On the shore we encountered a family of ducks. The ducklings were super cute! They kept gunning for my shoe laces, they probably thought that they were big fat worms. 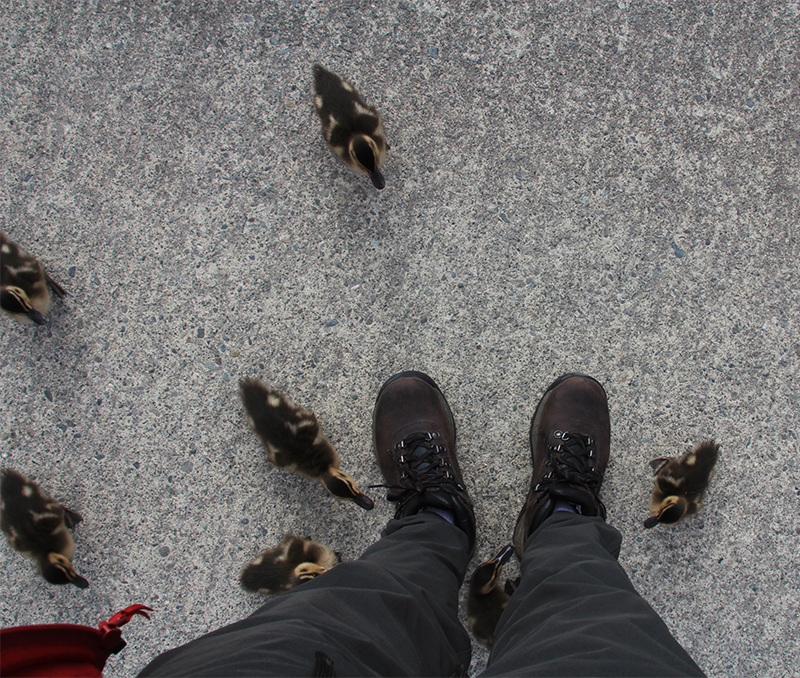 These ducklings were attacking my shoe laces!

From Kerr Bay we drove over to West Bay and following the road we drove up to Mount Robert. The road ended at a car park. We parked our car and took a trail at the end of the car park and walked for about 150 meters. There we came to a clearing where we had a good view of Lake Rotoiti from the top. 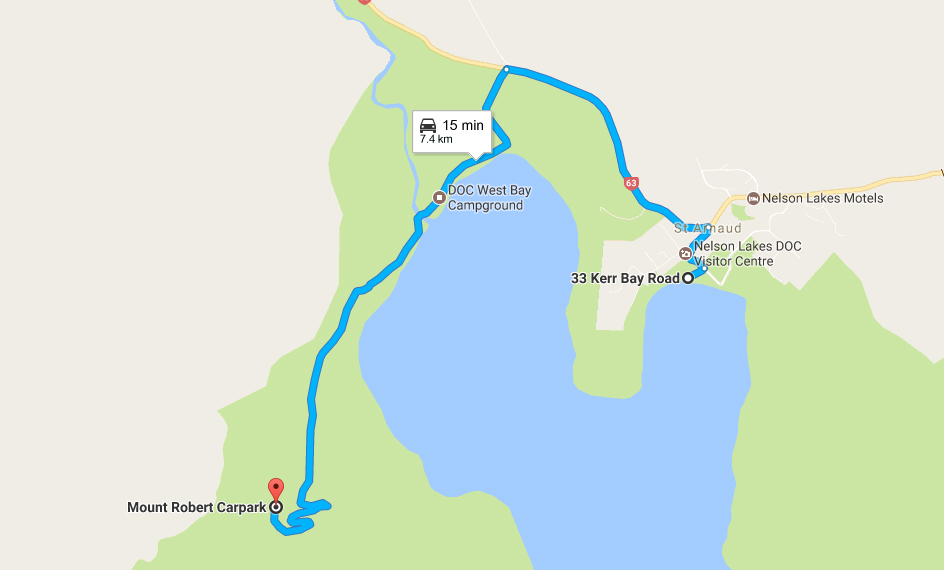 Route to a high view point of Lake Rotoiti

Lake Rotoiti from the top

Motueka Town was about 100 km north of Lake Rotoiti which took us about 1.5 hour to reach. It took longer than required because our TomTom GPS navigated us onto hilly roads instead of taking the highway. It was only later that we realised we had not set the device correctly. We should have set it for the “fastest” road and not the “shortest” road. Highways were faster though longer. 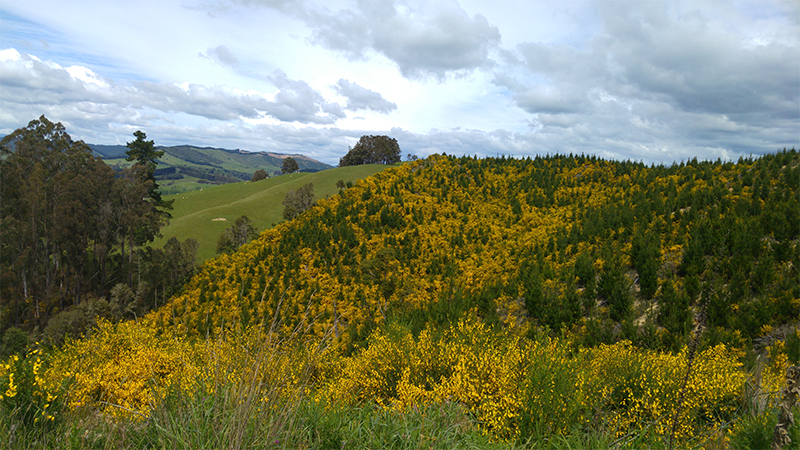 The slower route took us uphill and we were very surprise to see hills of yellow flowers stretching far and wide. Up the hill we noticed that our SPARK sim data card which was inserted into our spare phone kept losing signal. We used our spare phone as a wifi router (hotspot) for both Yat Thong and my phones. Throughout our journey Yat Thong’s phone was set to play our favourite Singapore’s radio station via the hotspot of the spare phone. So whenever the radio broadcasting stopped we knew we had lost the SPARK signal. On the other hand both Yat Thong and my phones were locked into Vodafone and its signal was so much better.

Though Motueka Town did not look very interesting, we still decided to take a coffee break in the town. 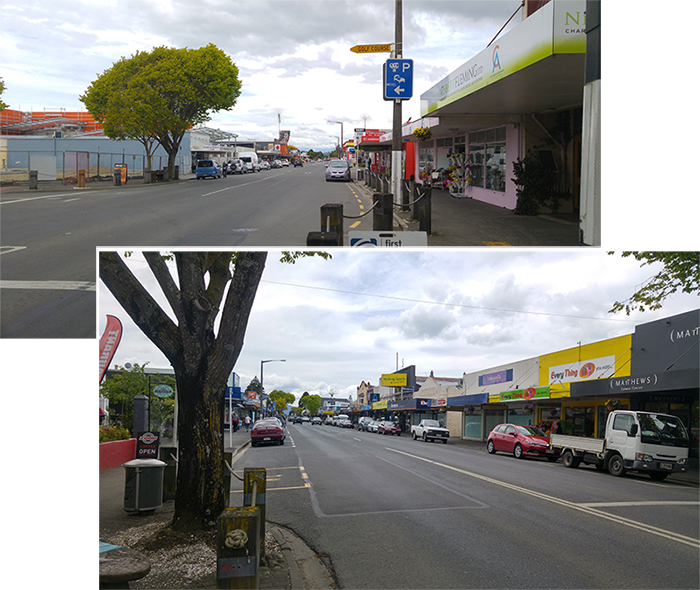 After passing several cafes we picked a very  “local” looking cafe and went in for cafe lattes and cakes. It was great to have a good break after being coped up in the car for one and a half hour. 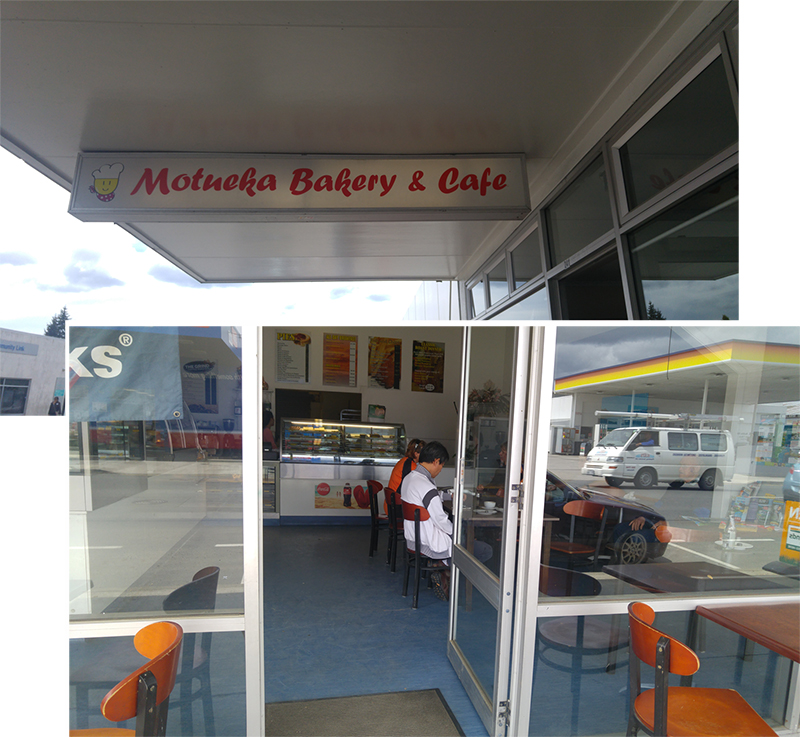 On the way from Motueka Town to Te Waikoropupu Springs which was located at Takaka area, we needed to cross Takaka Hill. It was suppose to be a scenic route. As we drove on, we kept a look out for a good scenic spot but could not find any nice view. It was probably the wrong time of the day or year as the scenery was pretty normal. We could have also missed a turnoff to the Hawke Lookout point but was reluctant to turn back.

We did came across an unusual rock park called ‘Ngaru Caves’. So we drove in to have a look. The “place” was full of rock formation sticking out of the ground. To go nearer to the rocks we had to pay an entrance fee to get through a fencing. We decided not to proceed but to view the rock formation from outside the fence. 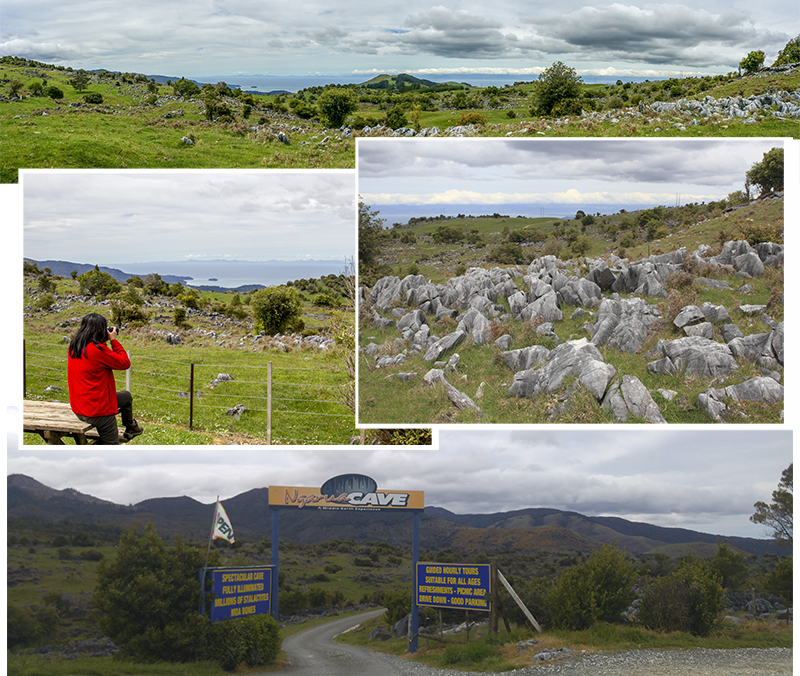 There was a huge carpark outside the entrance to Te Waikoropupu Spring. The entrance was a beautiful open structure with glass panels as its wall. On these panels were information about the springs. 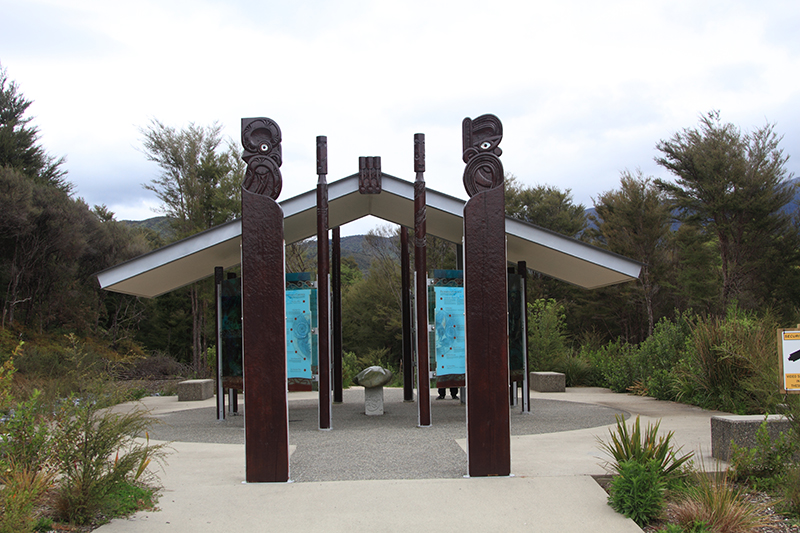 There was a loop path that would bring us to a nice view point of the springs. After passing the entrance we turned left and it took us about 30 minutes before reaching the viewing deck. At the viewing deck we were surprised to see three visitors who we met at the entrance, they were supposed to be behind us and yet they had reached the view deck long before us. I wondered which path they had taken.

The pool water was very lovely, unfortunately the sunlight was not strong enough to bring out its turquoise blueness. After the viewing deck we continued our walk forward on the same path and reached the entrance in just 15 minutes. If we had turned left after the entrance we would have taken a shorter path to the viewing deck.

On the internet the Holiday Park looked lovely so I reserved a private room for a night. Upon reservation I was required to pay the full sum. There would be absolutely no refund if I was to cancel the reservation. So even though I had the time to spend two nights at the holiday park I only booked one night because I wanted to see the place for myself before extending another night. We reached the holiday park at around 5 pm and like the day before it had already started drizzling. 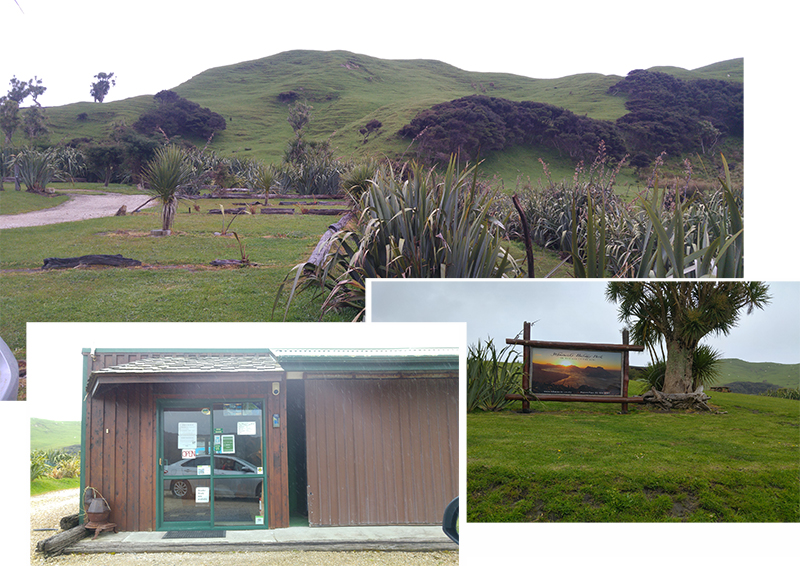 The check-in office was a container liked wooden shed. There were three persons sitting about in the office, I was not too sure if they were staff or guests of the park. Beside ticking off my name from a book, they were not very helpful or welcoming. My SPARK data sim card could not detect any signal so I enquired  about wifi availability at the park, the “staff” just told me that there were no data access at the holiday park and he did not even sound convincing!

We managed to find our way to our room which was half of a wooden cabin (there were only three cabins). It was a great thing that we could park our car beside it as the drizzle had turned heavier and we needed to be as near our room as possible to offload our stuffs. 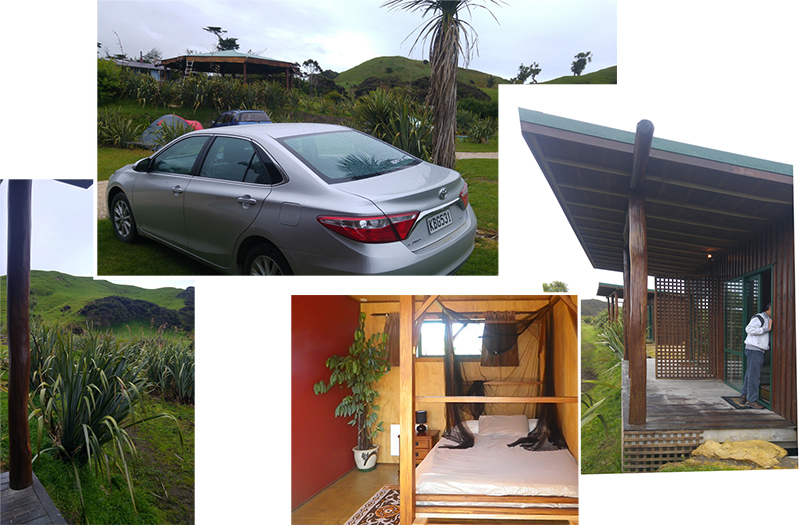 Well the room though was small, it seemed cosy and comfortable. I booked the room knowing that there was no ensuite toilet. I knew that the holiday park had shared facilities like kitchen, dining room, toilets, showers etc so I was perfectly fine with a private room with no cooking utensils and ensuite toilet.

It was just very inconvenient that these cabins were a distance away from the shared facilities and with the continuous drizzling getting heavier each minute, it was very troublesome to put on a raincoat and waddle uphill to the toilets or kitchen.

The rain kept us coped up in our room. We had long abandoned the idea of walking in the rain for 1 km to the beach to see the Archway Islands. By about 7 pm, we gathered all our food, put on our raincoats and waddled up slope to the common kitchen. There was where I was hit with a nasty surprise. There was a stove/oven but there was no cooking utensils, no pots, plates or cups, no forks or spoons. They should have announced at their website that guests were expected to bring their own cooking utensils and crockery when using their kitchen!!

I asked a lady in the kitchen if there was anyway I could borrow some pots and utensils and she said that none was available to guests but if I was a “staff” like her then I could use the utensils at the staff quarter. Huh? These holiday parks though was in a lovely environment had just turn into a bigger inconvenience by the hour for guests like us. We could not cook, the cafe that was supposed to be within walking distance was closed, the nearest town was kilometres away and the park seemed to be managed by a group of staffer that could not be bother with their guests!!!

We went back to the shared facilities again at about 9 pm to wash up and get ready for bed. It was another nasty experience. The hot shower was operated by coin, it ran for ten minutes after the coin was dropped. I was all prepared to complete my shower in 10 minutes what I was unprepared for was for the shower room to be plunged into darkness three minutes into my shower. The light switch was this “rubber spring type switch” that switched off the light every three minutes. So there I was, naked, full of soap lather feeling my way in pitch black for the switch!!!!

How I wished the owners of Wharariki Beach Holiday Park put some thoughts in creating a more “positive” experience for guests who stayed in their cabins. A positive experience and the beautiful environment would make this Holiday Park a superb place.