The original itinerary was to extend another night at Wharariki Beach Holiday Park, but since the park was not guest friendly we decided not to stay another night. This morning we would visit Archway Islands and then the nearby Cape Farewell. Later we would travel southward all the way to Lake Rotoroa which was another Nelson Lake, just beside Lake Rotoiti where we were two days ago.

We had no idea where we would stay tonight, we would love to stay at Lake Rotoroa but nearest to the lake was a very expensive hotel, that charged in a tune of NZD$1000 a night and a campsite for self sufficient campervans. Both were not suitable for us, so we would have to explore and decide at the final moment for a suitable place. 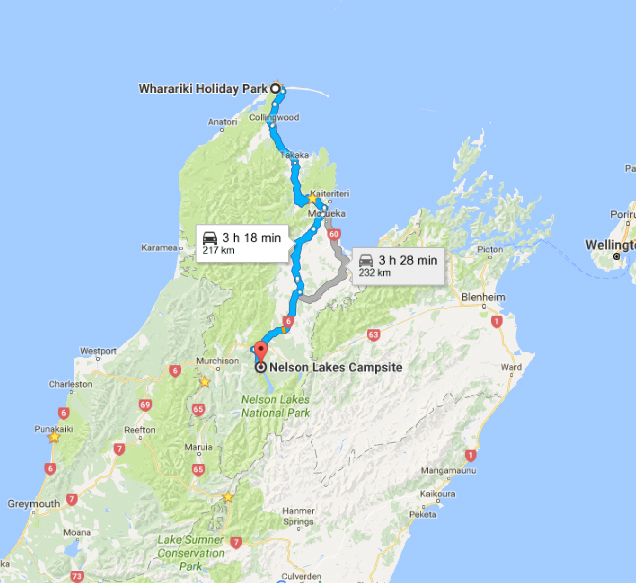 When we reached Lake Rotoroa it was already about 7.30 pm and again for a third day in a row it rained.

We left our cabin/room early in the morning at about 6.30 am and walked toward the direction that led to Archway Islands. It was supposed to be a short 1 km walk, but it wasn’t a simple walk, it involved going uphill and walking on the ridge. The morning air was fresh and clean and it felt wonderful to be out and about. 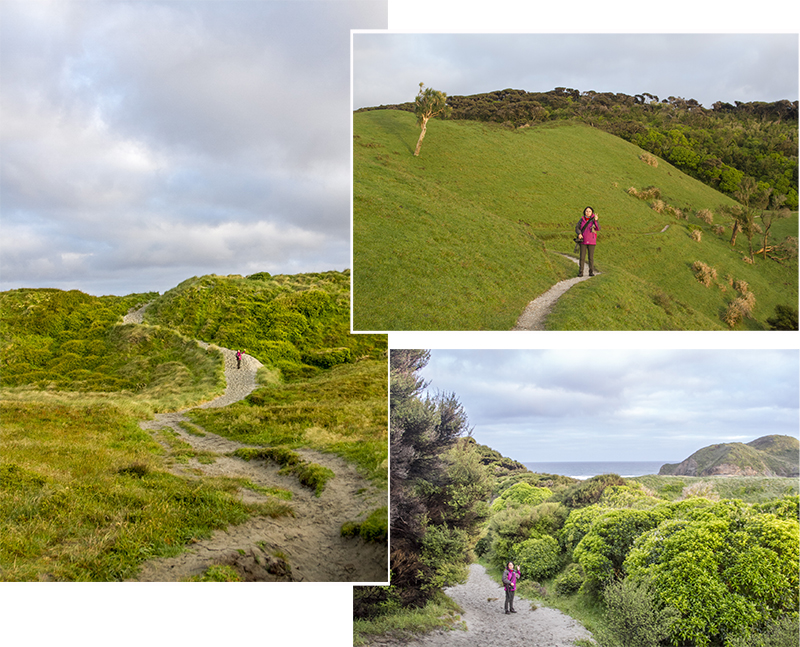 The one kilometer walk started from the holiday park toward Archway Cafe. At the cafe we via right and took the path that went uphill. It was the shorter of several paths that could lead to the beach. 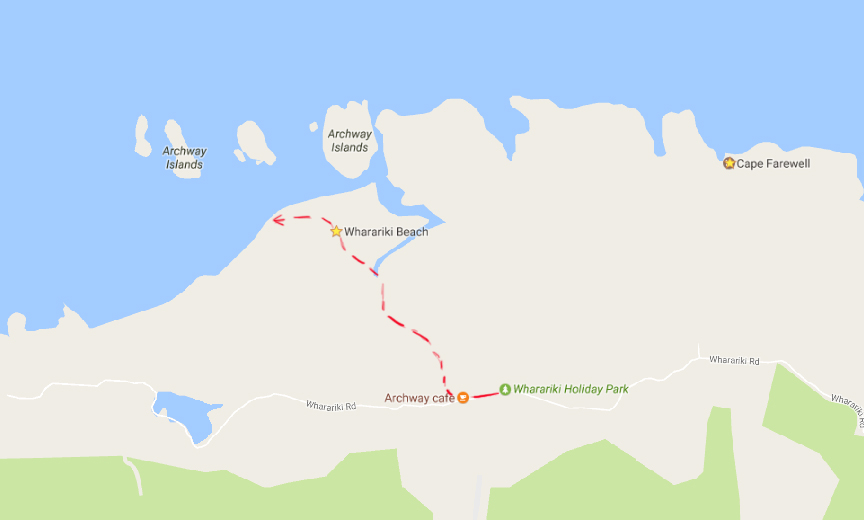 Just before the beach was a small “pond” and we saw some seal pups frolicking in the water. Finally we reached the beach, it was gigantic, wide and very flat. Wharariki Beach was located at the most northern end of the south island. 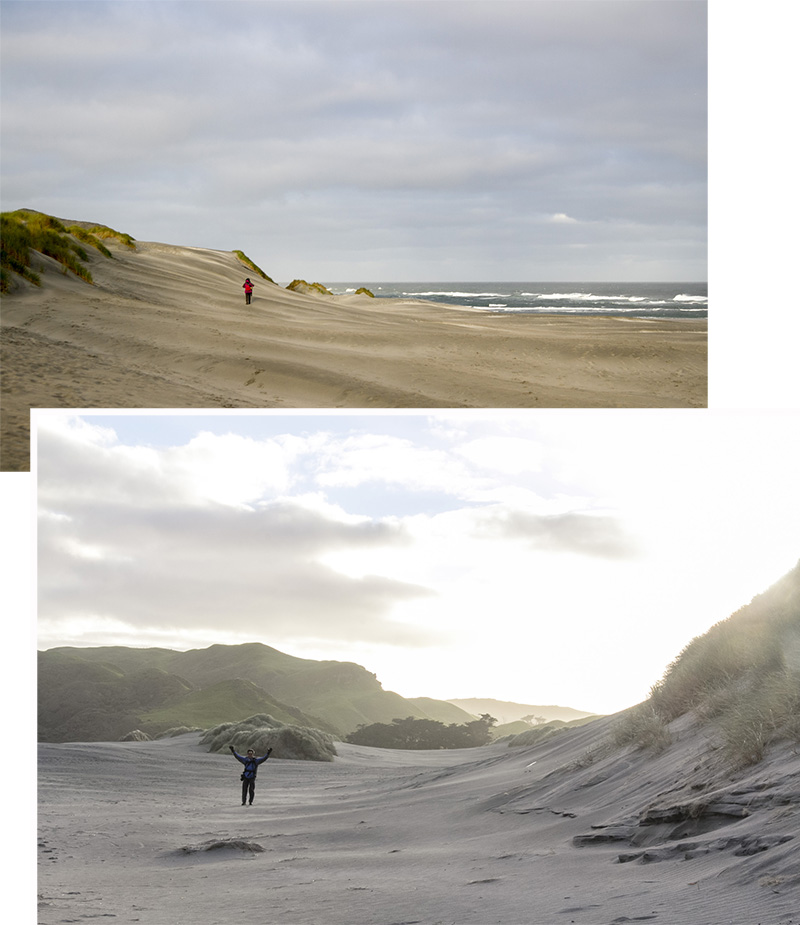 Near the shore we saw a few gigantic rocks sitting majestically in the water. These were the famous Archway Islands. It was a pity that the tide was not low enough for us to walk right to the rocks. 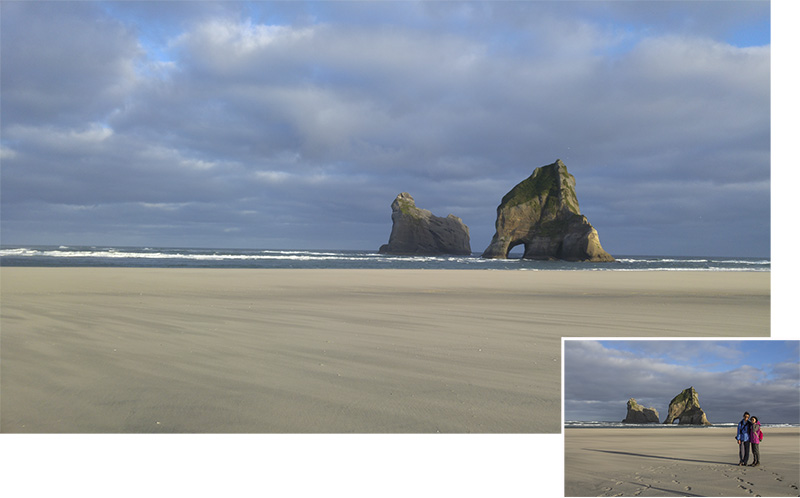 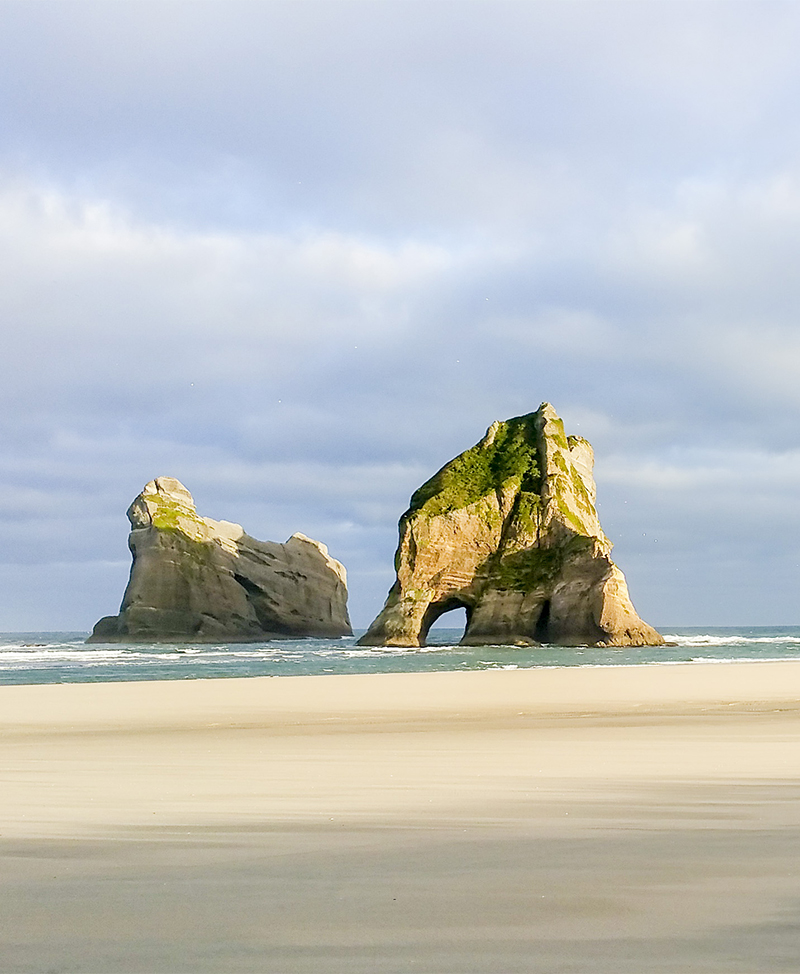 Archway Islands in the morning

Archway Islands was so far north from Christchurch, it was so out of the way. But having seen the it we were glad to have come. Its scenery was uniquely beautiful and could not be found in other parts of NZ. It was a pity we had not had arrived at Archway Islands at its best time for photography as the tide did not go far out enough and it rained almost every evening. 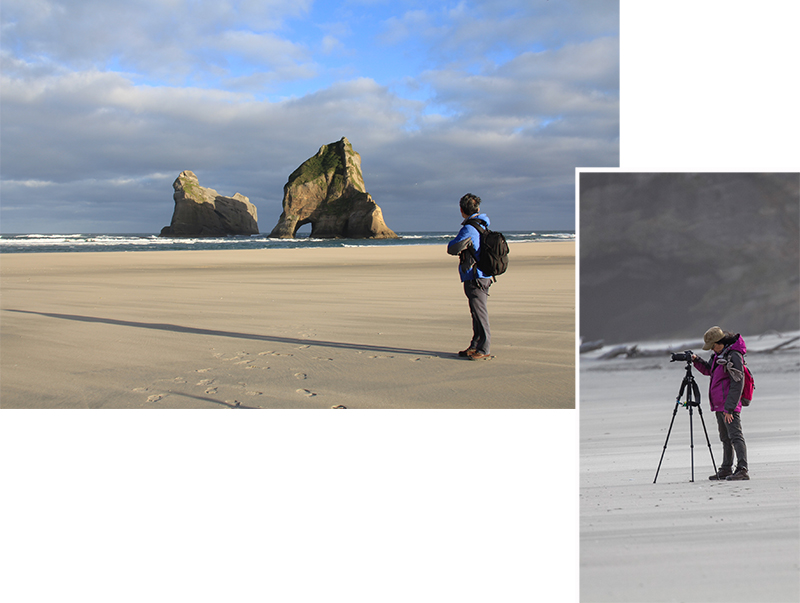 We left the holiday park with empty stomach and that was not our choice. After our visit to Archway Islands, we waited for 30 minutes (9.10 am to 9.40 am) outside Archway Cafe which was run by the same management of the holiday park. We were looking forward to eat a good breakfast after a pathetic cold (bread & ham) dinner last evening. Unfortunately Archway Cafe stayed shut and there was no indication/signboard informing visitors of its operating hours! This added on to my growing list of disappointments with this holiday park.

On the holiday park website, it gave the impression that food would not be an issue for guests and yet when we were there the shared kitchen was not usable, the cafe stayed shut all the time and there was no staff around to answer our queries! I strongly felt that the management of the park should be more truthful in its communication to potential guests. Honest information would definitely not deter visitors (because the park was in a vantage position), it would allow guests to come well prepared (bringing along food, crockery and utensils) and have a great time.

The turn off to Cape Farewell was about 800 m east of Wharariki Beach Holiday Park on Wharariki Road. After the turn off, we drove for another 500 m before the road ended. From there we walked up a hill for about 200 m to reach a viewpoint of Cape Farewell. The wind was very strong and the waves crashed violently into a huge tall hole near the end of the cape. 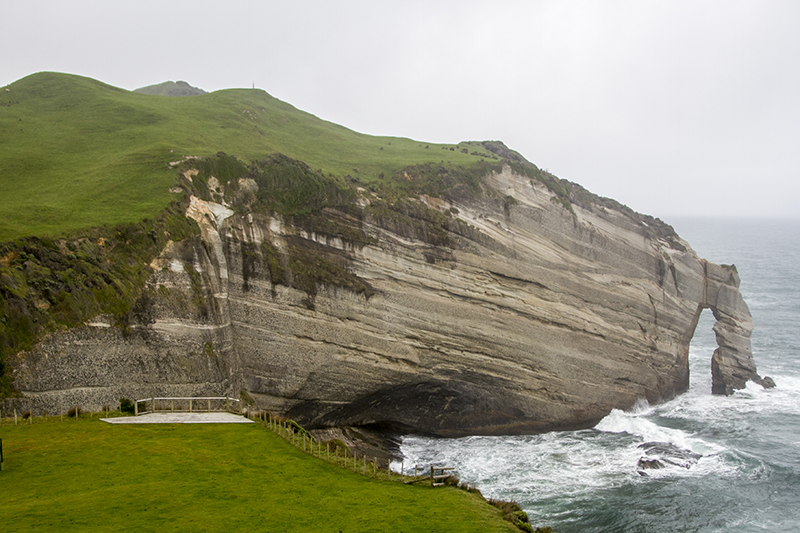 From the viewing deck we walked up a steep slope facing the cape to view the cape from a higher point. It was a challenge going against the wind and spray of the sea water just to reach the top. From there the cape looked much smaller and not as impressive as when seen at the viewing deck. 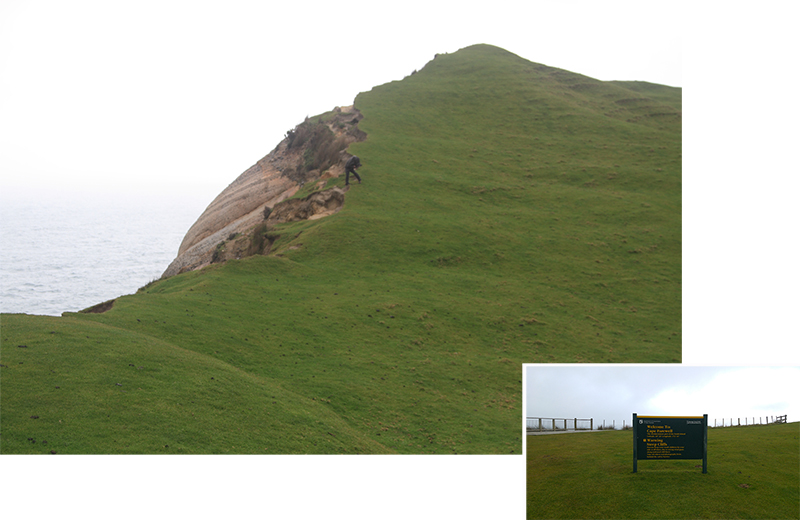 It was near 11am when we left Cape Farewell, we were hungry and our stomach were growling. As we drove towards Takaka Town we kept a hopeful lookout for a cafe for breakfast. After about 39 km we came to a quaint cafe, Mussel Inn. We went in and had a great breakfast.

From our direction of driving the signboard of Mussel Inn was not very obvious. We would have drove pass it if we were not on a look out for a cafe. 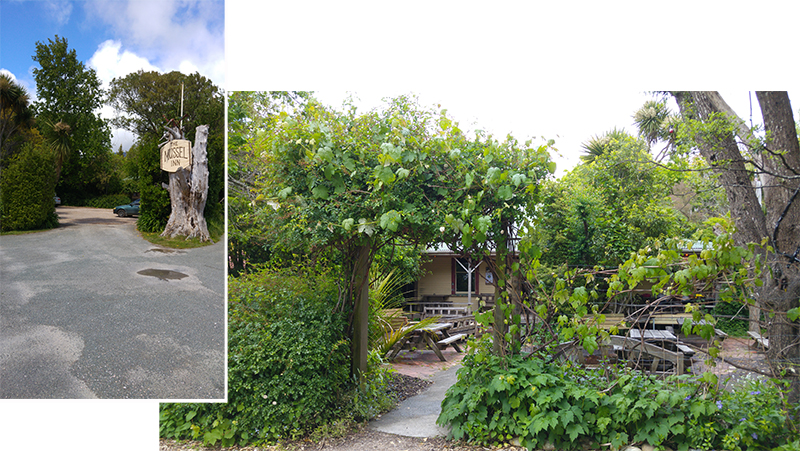 At the Inn we ordered one breakfast and two lattes, which came up to NZD$23. If we had order two portions of breakfast the bill would easily come to near NZD$40. Eating out in New Zealand was pretty expensive. During tour trips, we usually ate lesser during meal times but stopped more frequently for snacks and cafe lattes to break long drives. So one meal portion of breakfast for two was good enough. 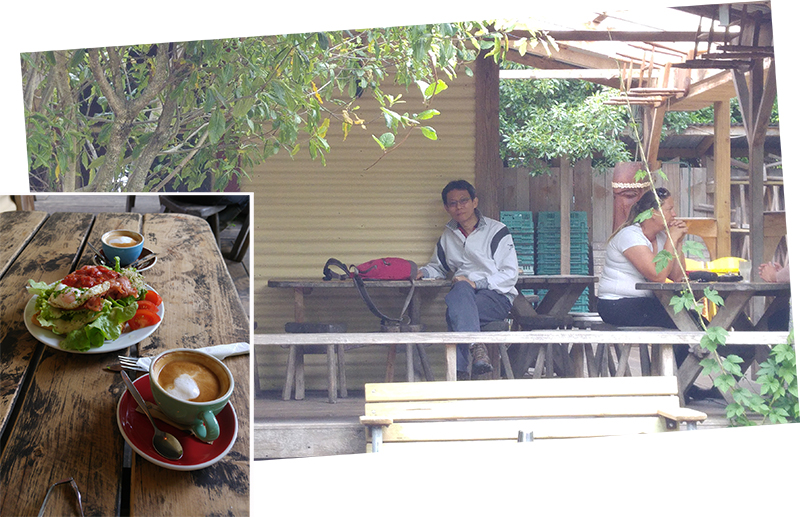 The exterior of Mussel Inn was totally different from its interior. On the outside it looked like a neglected, slightly run down place. Inside the inn was a different scenario, it had a brick fire place and the four walls were colorfully decorated with many pictures and ornaments. 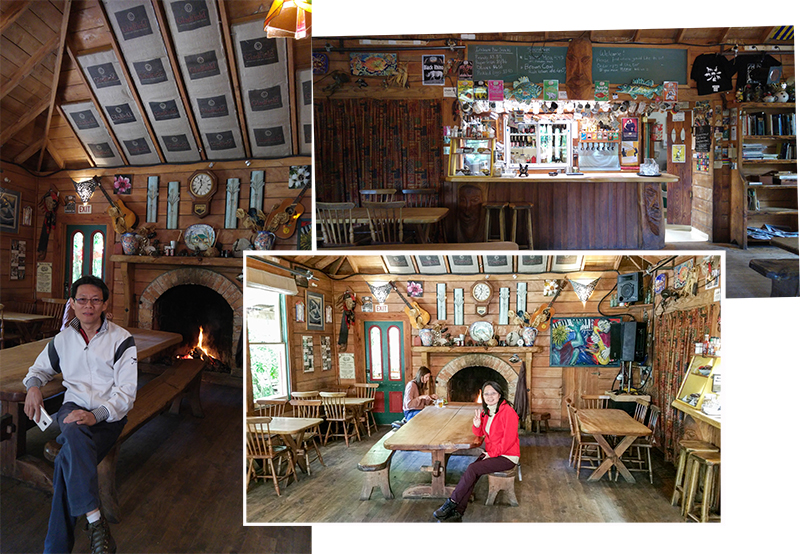 A second visit to te-waikoropupu springs

This time when we reached the springs it was near noon time. The sun was bright and shining so we decided that the springs deserved a second visit.  After the entrance we turned right and took the shorter route to the viewing deck. The springs certainly looked many times more beautiful in the bright sunlight as compared to day before.

The beautiful turquoise water was very lovely and captivating. Both of us stood for a long time on the viewing deck staring at the clear water and its surrounding, very reluctance to leave. 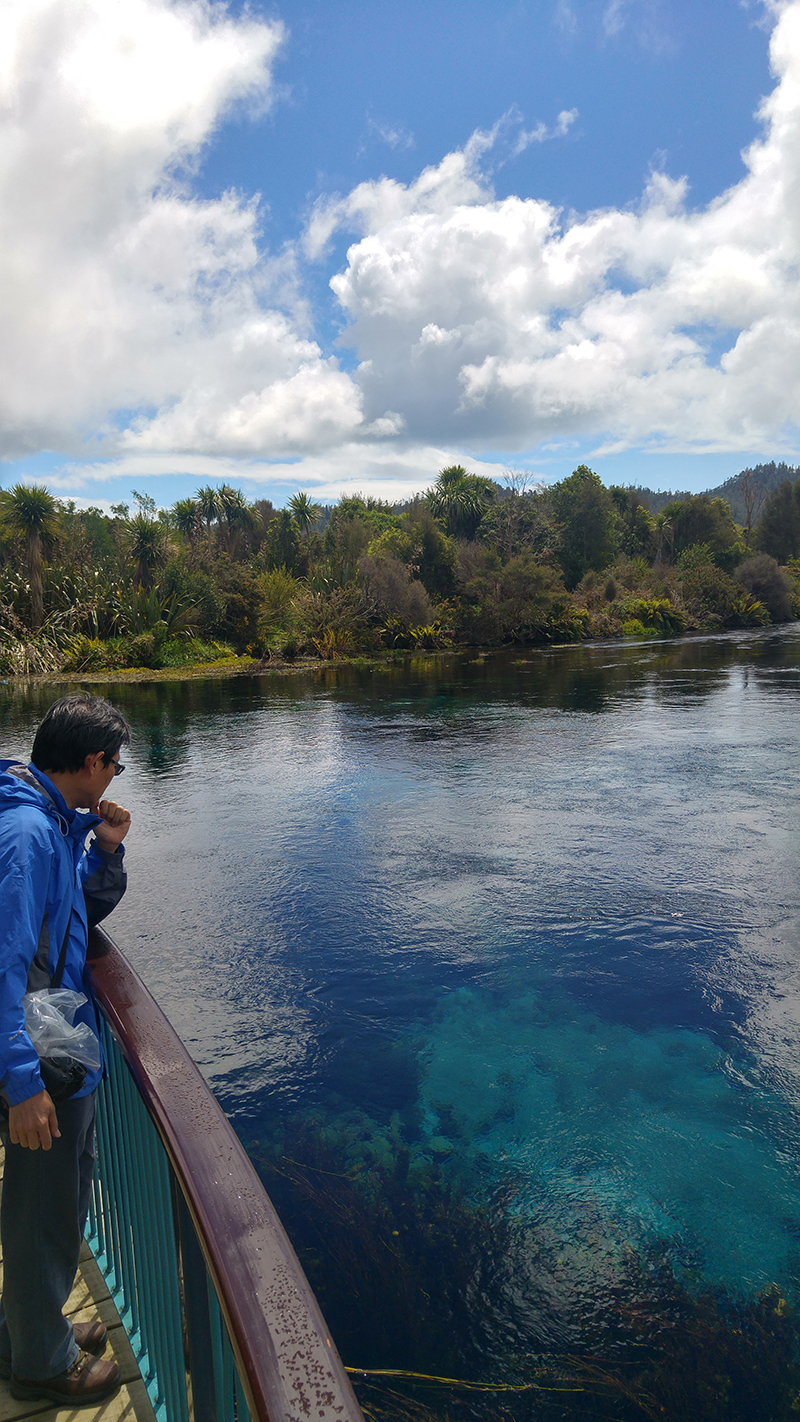 The day before when driving across Takaka Hill we missed the turn to Hawkes Lookout carpark (coords-41.023446, 172.907871), so today we were careful not to missed it again. From the Hawkes Lookout carpark we walked about 200m to the viewing deck and was rewarded with a panoramic view of the surrounding area, the Riwaka Valley and the Tasman Bay 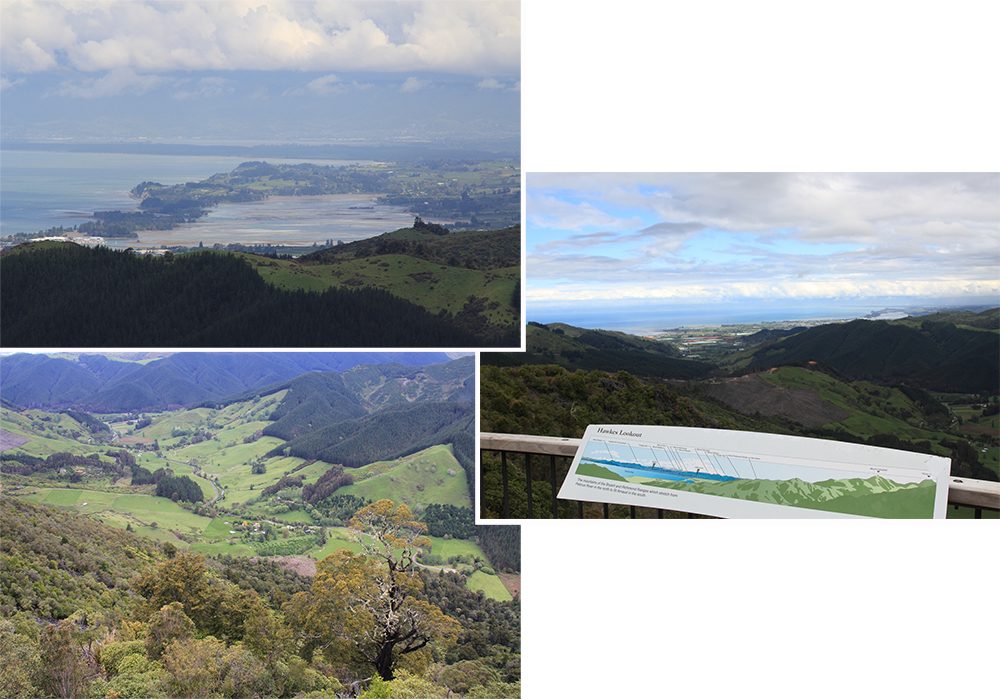 After Hawkes Lookout there was still another 127 km to Lake Rotoroa, this route would only need about 2 hr of driving but we were doing it in double the amount of time. We were slowing down at the many towns along the way to spin pokestops, to catch pokemons and to fight pokegyms. We knew we were a bit overboard over the Pokemon Go game, but this was our holiday and we should do whatever we like as long as we were not missing the important sights. We knew one day soon we would get over the Pokemon Go craze so we should enjoy it while we could.

We were about 20 minutes from Lake Rotoroa when we chanced upon a scenic lookout point. It was Hope Saddle lookout. 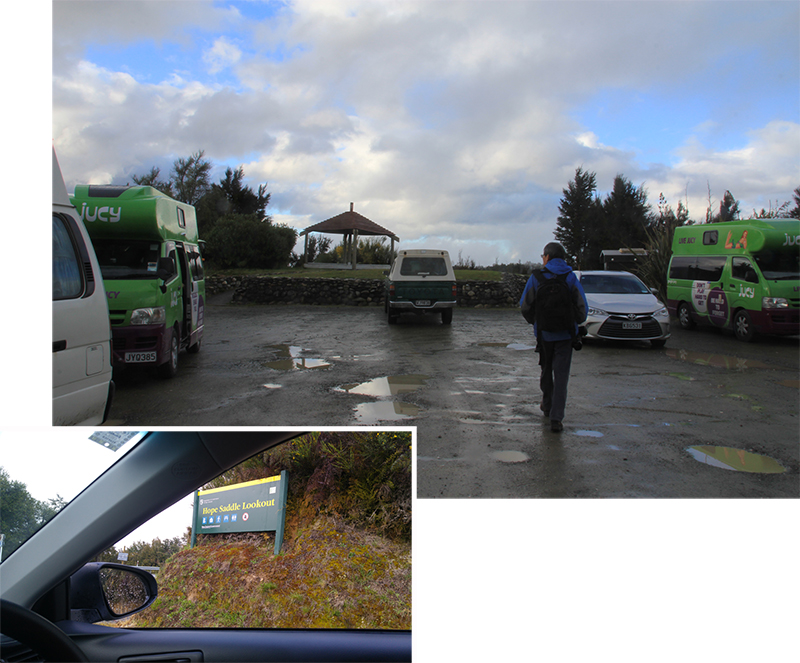 The time was already close to 6.20 pm and it had been drizzling on and off for the past two hours. By the time we turned into Hope Saddle car park the rain had stopped. We walked a short distance to the the viewing deck and saw a view so much more beautiful than our expectation. We were expecting a similar view to the one we had seen at Hawkes Lookout, but the scene in front of us was so ethereal.

Thanks to the earlier rain and the 6.30 pm setting sun. Layers and layers of mists were rising  up into the sky. The rays from the setting sun gave the sky many shades of sparking white and grey tones. The rising mists from between the trees in the valley highlighted their shapes and forms which would have been very monotonous uniform on a normal day.

The wonderful thing about carrying a camera was that it became my binocular, it helped me to see so much farther and so much clearer. 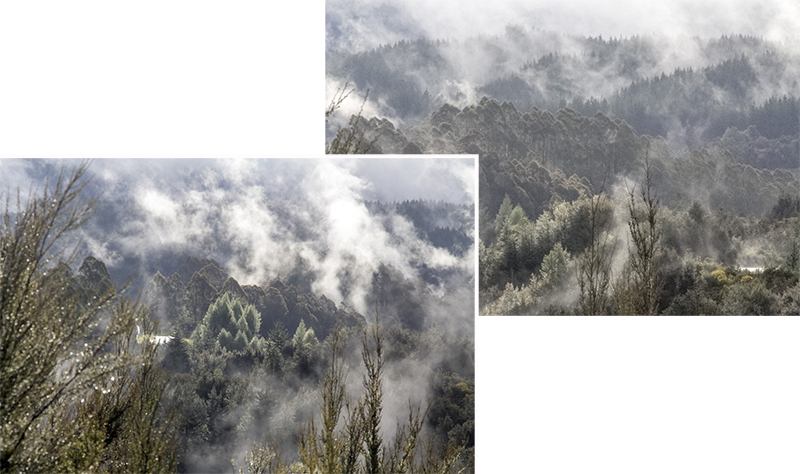 Lake Rotoroa and Lake Rotoiti were the two major lakes in the Nelson Lakes National Park. We had a wonderful experience at Lake Rotoiti and was looking forward to seeing Lake Rotoroa (the larger of the two). It was close to 7.45pm when we reached the lake front. Luckily at this time of the year the daylight hour were longer and the sky had not darkened yet.

We parked our car to come out for a walk, the air and ground were damp because of the earlier rain. We would have stayed longer at the lake front if not for the swarm of flying insects that were all around us. Could the rain have brought out the insects? We did not encounter these flying insects at Lake Rotoiti. Soon it started to drizzle again so we had to leave. 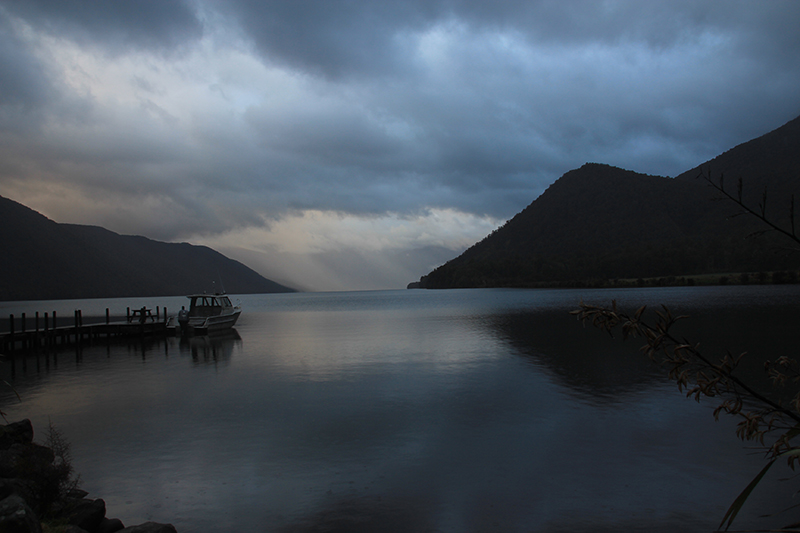 Just a few hundred metres from the lake we spotted some backpacker hostel. We went in but the place were locked and nobody was around. There was a signboard that said “out at the lake” without any contact number. I walked around the house peering through the window into its interior, the place looked deserted with no sign that it was opened for business. We waited until the sky darkened and still nobody came back. We believed that the hostel was still close for the season and the sign was left unintentionally.  Even the expensive hotel, Lake Rotoroa Lodge, by the lake was deserted.

We had no choice but to drive towards the nearest town, Murchison which was about 39 km away. Midway about 20 km from Lake Rotoroa Lodge we came upon Owen River Tavern & Motels. We drove up the driveway, went into the Taverns (which was also a Pub) and reserved a room. The lady owner who was a Chinese gave me a NZD$10 discount, probably because it was already very late or probably because we were also Chinese. 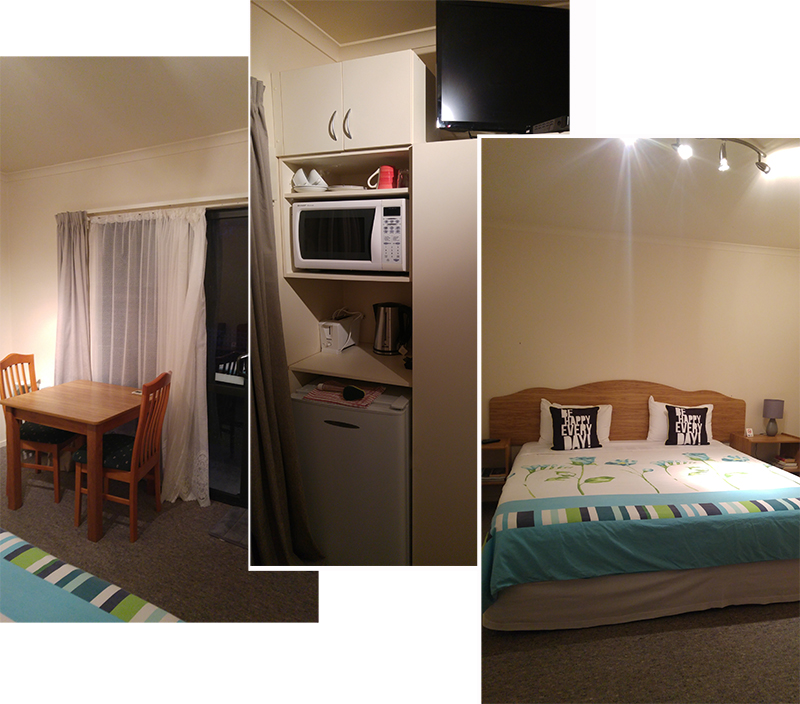 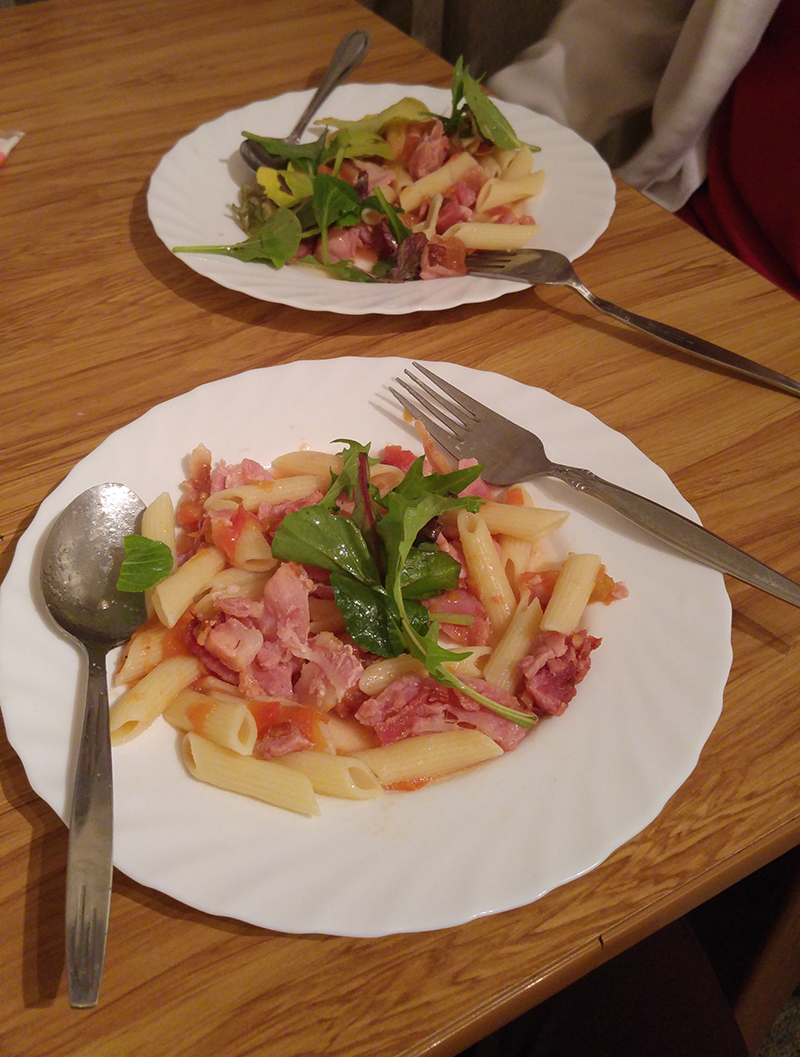 We loved the room. It was big, cosy, comfortable, clean. It had microwave oven, plates, cups, utensils, kettle, tea, coffee and etc. It had a big ensuite toilet. It had all the things that we missed at Wharariki Beach Holiday Park. It was run by people who were in the hotel/motel business!

With the microwave and kettle, I was able to boil my pasta macaroni, cook raw ham and tomatoes and served a inexpensive delicious dinner for two. Yummy!!! 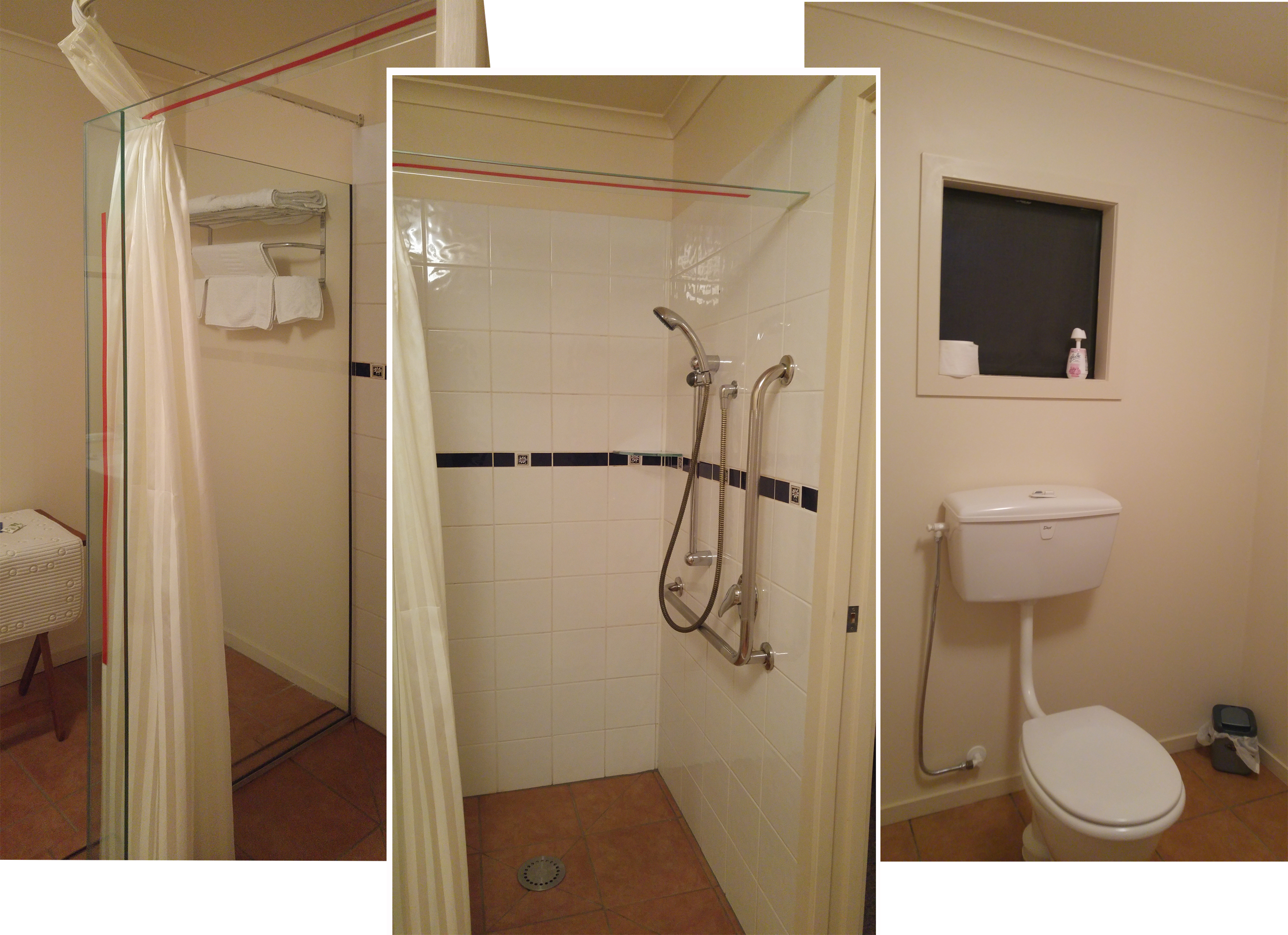