Since our motel was only 20 km from Lake Rotoroa we decided to visit the lake again first thing in the morning. In the afternoon we would travel westward to Pendicular Point where I had already reserved a room at Te Nikau Retreat YHA.

The entire distance for today, including the loop to Lake Rotoroa and back was about 200 km. 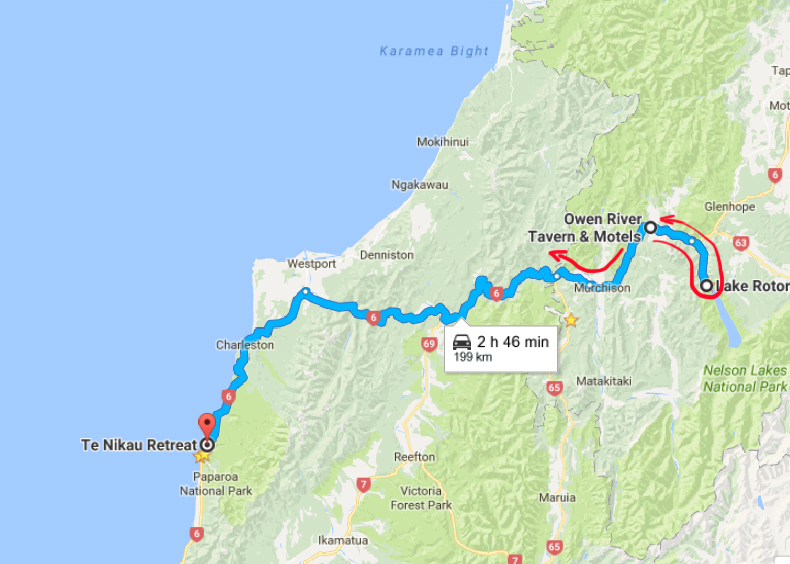 We reached Te Nikau Retreat at about 5pm, in between we detoured to visit a seal colony. Te Nikau Retreat was a surprising interesting retreat, a jungle retreat with comfort in mind. We definitely enjoyed our stay there.

Lake Rotoroa in the Early Morning

The lake was very beautiful in the morning. The water was very tranquil and the surrounding very serene. There were still many flying insects flying around us but definitely must lesser than the evening before.

Lake Rotoroa at 8am

At the lake we could see many layers of white mist rising from the mountain into the air. It gave the place some very mysterious vibes. We walked leisurely around the jetty capturing many beautiful shots of Lake Rotoroa at different angles. 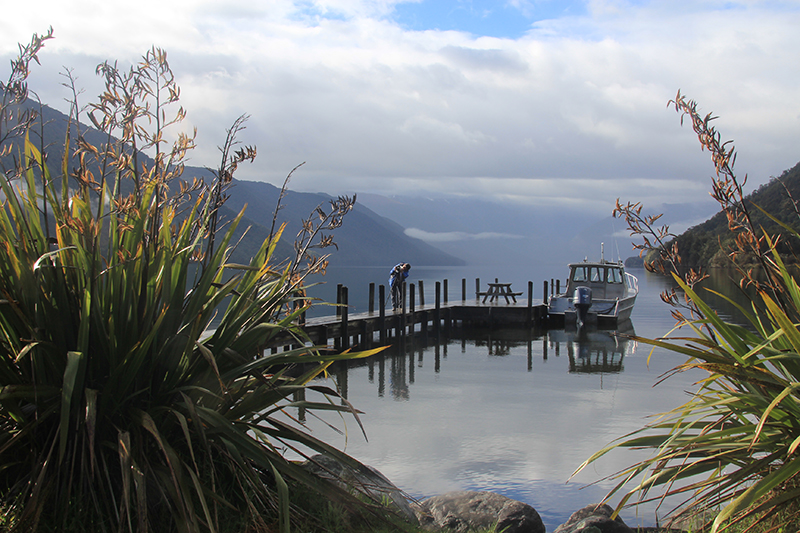 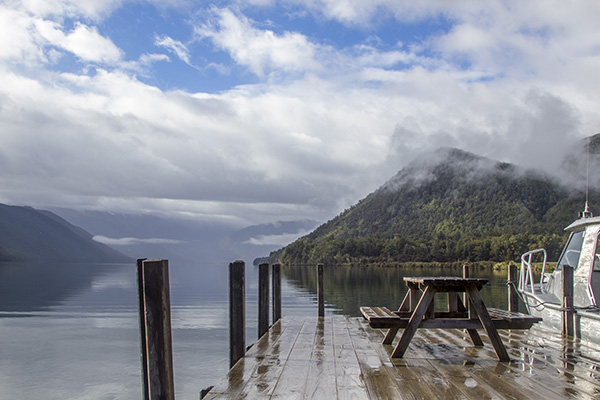 Back at the motel after the morning trip to and from Lake Rotoroa, we made and ate our home cooked breakfast. Somehow without a good cup of coffee, the breakfast seemed incomplete so we popped into the tavern for a cup of cafe latte. 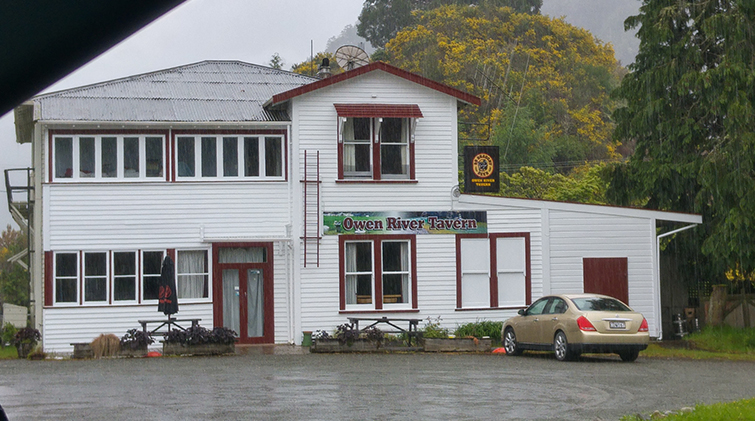 Last evening it was very late and was raining when we reached the tavern. We were in a hurry to get to our room which was in a separate building and did not have a chance to have a good look at the interior of the tavern. This morning we could see that the tavern was very cosy and homely, just like a neighbourhood PUB.

We met Kim and John (owners of the tavern and motel) and soon we were conversing in Cantonese dialect. We found out that our children had common interest, “street dance”. The short coffee break became a long chat with the friendly couple. 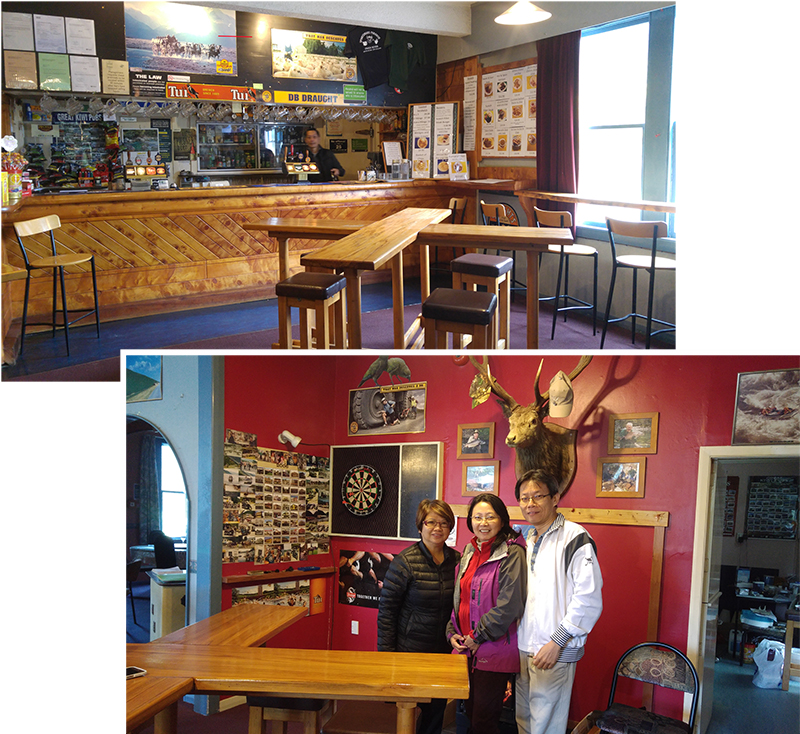 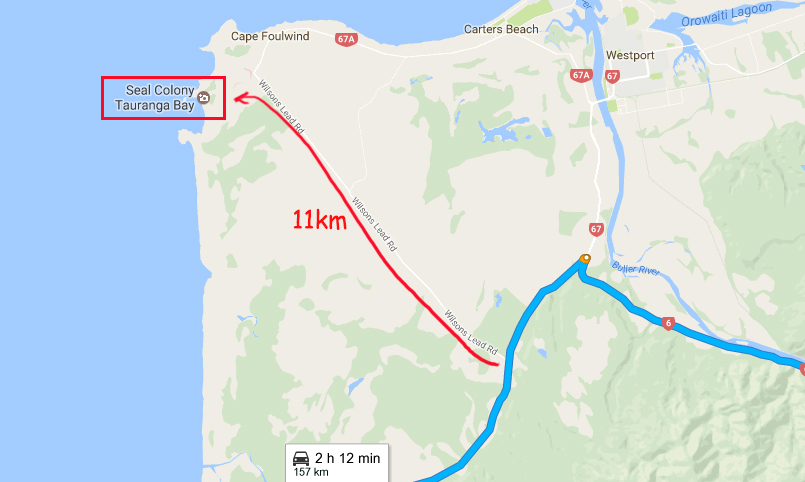 We were driving on the State Highway 6 and at about 115 km from Owen River Tavern & Motel, Yat Thong spotted a signboard pointing to a seal colony. Though the seal colony was not in our itinerary we decided to detour and visit it since we had plentiful of time. From the highway we turned into Wilson Leads Road and drove for about 10 km towards Cape Foulwind before we turned left onto Tauranga Bay Road. 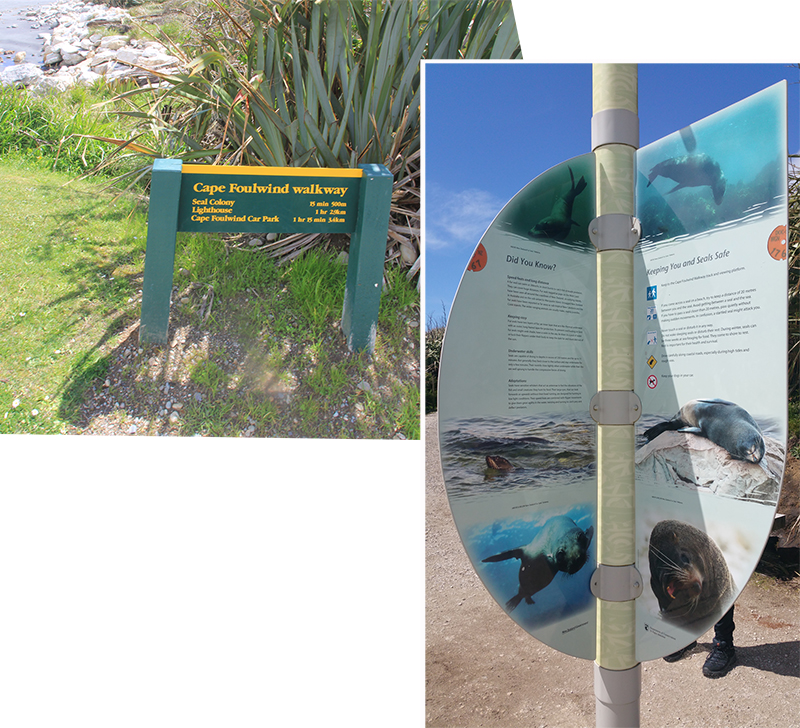 At Tauranga Bay there was a huge car park and a board walk towards a viewing deck which was about 500 m away. From the viewing deck we were able to see many seals basking in the sunlight on a rocky outcrop in the sea just below the viewing deck. It took us a while to spot the seals as their grey body looked just like the grey rocks around them. Several other seals could be spotted swimming nearby approaching the outcrop. 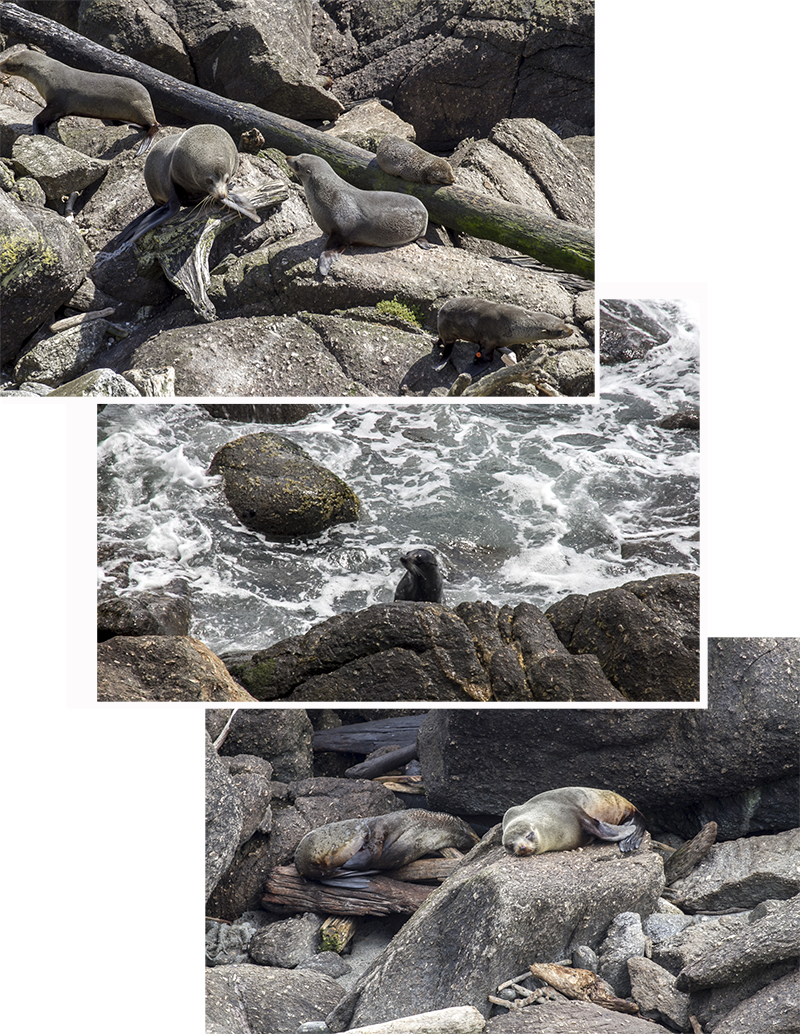 Seals basking in the sun

It was a good detour, a good break. Besides seeing the seals we also saw a spectacular view of the western coastline. 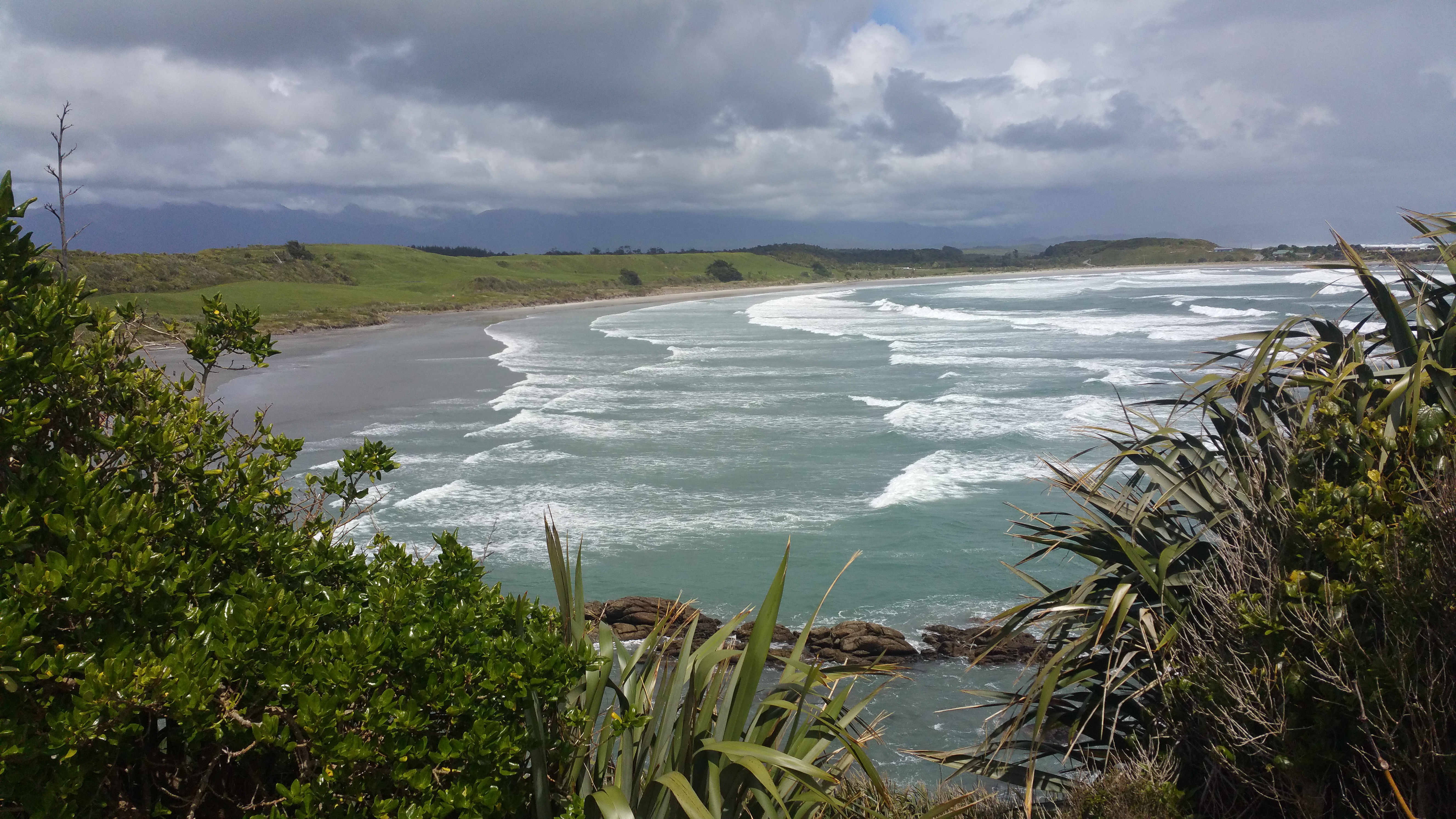 After the seal colony we had to backtrack onto Highway 6 and continue our journey westward till we reached the west coast again. The road hugged the west coastline and we were able to see the scenic coast as we drove southward. Near Perpendicular point we slowed the car in search for a good place to stop.

The west coast at Perpendicular point was famous for its spectacular scenery. Just after a hairpin curve we saw Irimahuwheri Lookout (co-ords -42.075303, 171.355166). This lookout was easy to miss because it was on the opposite side of the road and the signage was facing the opposite direction. 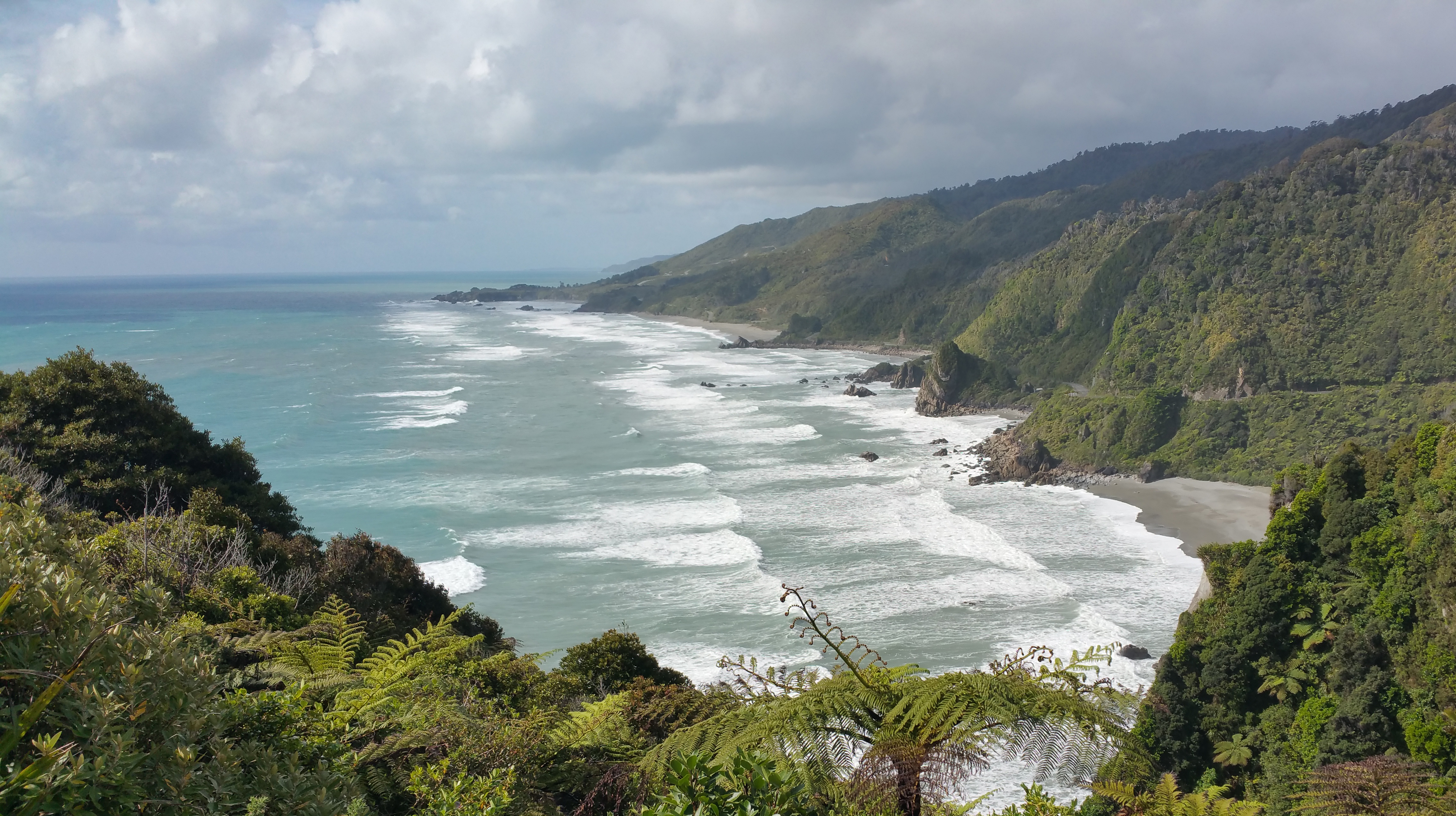 We parked our car at a set-in just after the curve of the road and went up the viewing deck. The view was truly spectacular! We could see the many mountain ranges that ended at the coastline and the coastline that curved in and out with the ranges. The view would have been even more spectacular it there were layers of fine mist rising from these ranges, delineating one range from the next.  It was near to 4.30 pm, still a long way from sunset time, when we left the viewing deck. I felt a sense of regret for leaving without seeing the rays of the sunset brushing the coast.

I booked Te-Nikau Retreat at the very last moment when I included Perpendicular Point as a destination in the final stage of planning my trip itinerary. I did not research much into it and did not know what to expect. I chanced upon it when I was searching for an accommodation as near to Perpendicular Point as possible. The rate was NZD$100 for its Hideaway Cottage which came with ensuite toilet. There were other options some with self contain kitchen, some for large group of guests, some were dormitory setting.

This retreat turned out to be a very pleasant surprise. It was a retreat in a “Forest”! 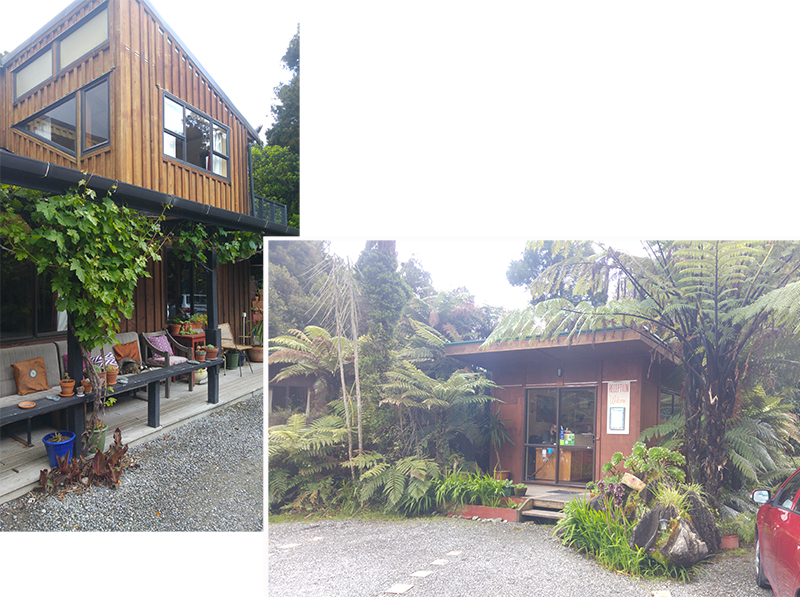 The common facilities which included kitchen, dining room, sitting rooms were housed in Te-RuRu lodge a big two storey building just opposite the reception. The kitchen came complete with cooking pots, crockery and utensils. Great, I would be able to cook a simple dinner and breakfast the next day. 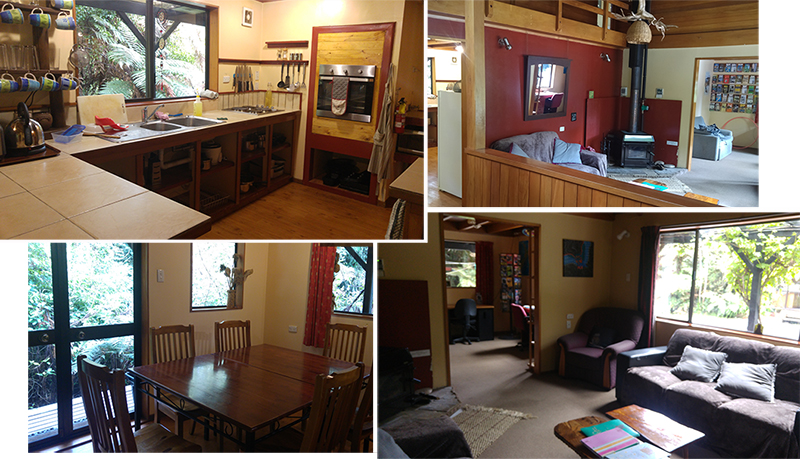 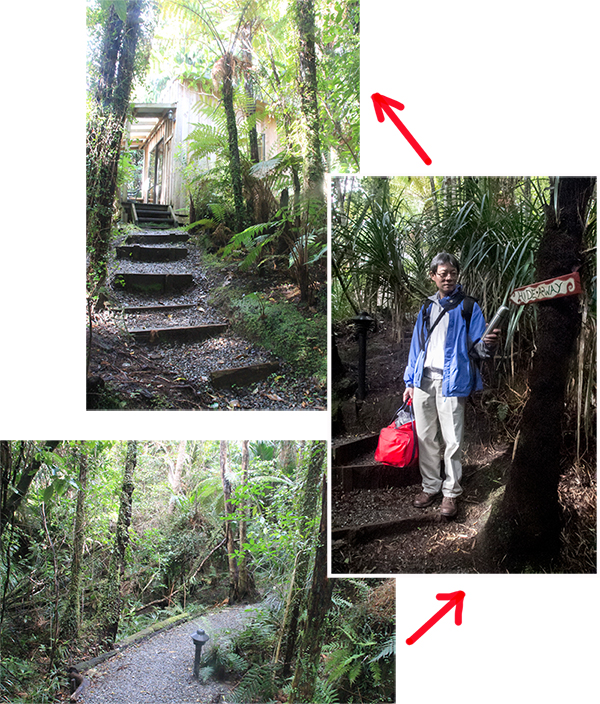 Taking the “jungle” path to our room – “Hideaway Cottage”

The retreat was built in a “jungle” setting, its cottages and lodges were dispersed in the forest connected by jungle trail. From the clear instruction given by the staff at the reception and the many directional signs, we had no problem taking a “jungle” path to our “Hideaway Cottage”.

The path though looked very rugged had lights installed at interval. This would mean that we would not have any problem venturing out at night.

We passed two other larger cottages before shortly arriving at ours which was on a higher ground.

The exterior of the cottage looked very basic and primitive but its interior was very cosy and well decorated. 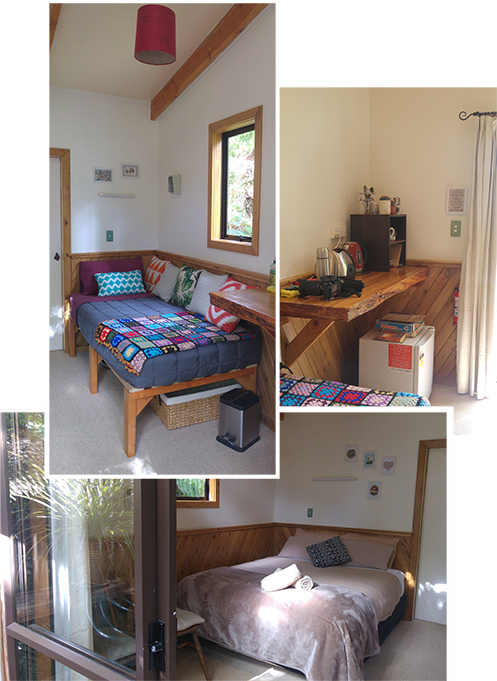 The room looked very welcoming, it was clean,  airy and bright. There was a little pantry with toaster, kettle, free tea and coffee too.

A door at the end of the room led into the ensuite toilet. Which was pretty okay in term of size.

The best of all was that in this “jungle” we got free wifi, compliments of the retreat management.

Once we put down our bags, Yat Thong made two cups of tea and we lazed on the chairs enjoying the wilderness from the balcony of our cottage.

Our cottage was surrounded by tall trees, it felt absolutely isolated as we could not see the nearby cottages from our balcony. All we could hear were chippings of birds and other nature sounds.

We enjoyed the “isolation”, comfortably knowing that we were not far away from others.

After a good rest we were ready to go down to the nearby beach to enjoy the sunset! 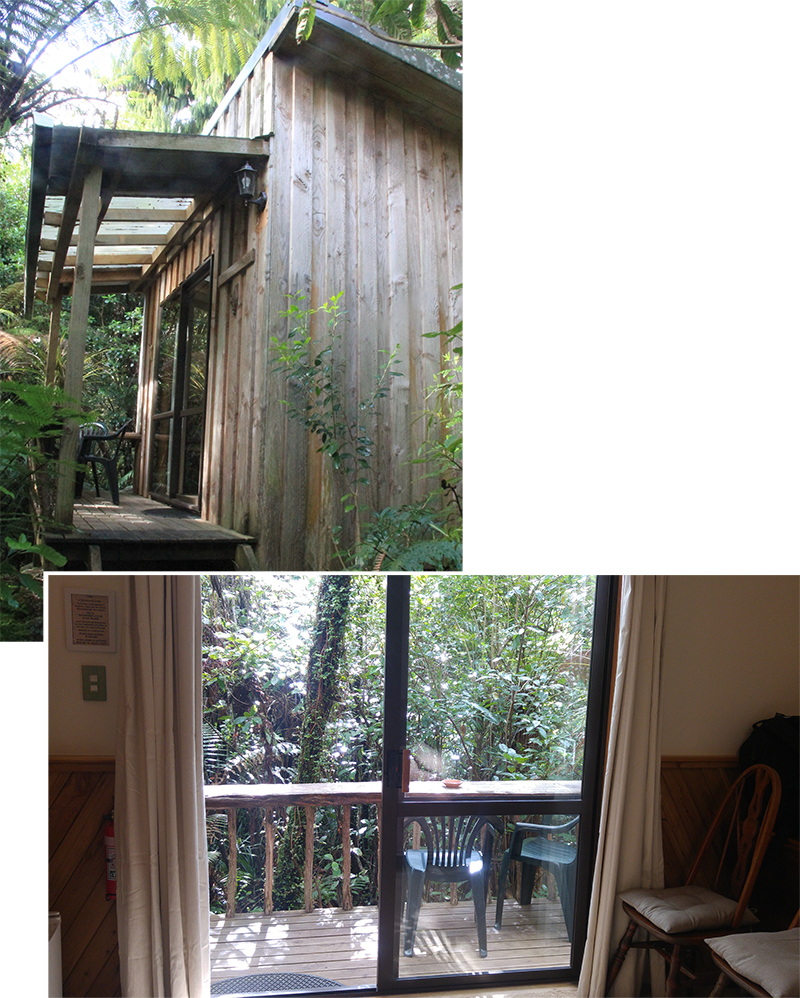 We were told by a couple, who were also guests at the retreat that the sunset at the beach was spectacular. So we took a path that started within the Te Nikau Retreat and followed the signage that pointed us to the beach. The beach was supposed to be 400 to 500 metre away. The path led us to the exit of the retreat at another end, unfortunately from there onward there were no more signage to the beach.

We tried reading a paper map that was given to us at the retreat reception but it was quite useless. We spent more than half an hour going around in circle until we met a German couple who were returning from the beach. They pointed toward a dense vegetation and told us that the path was over there. We were surprise that the path was narrow and very uneven, a section of it dipped down and crossed a small stream. We wondered how the German couple knew where to find it in the first place! The path was actually a shortcut to the Truman Track which was a larger path leading down to the beach.

We finally reached the steps at the end of the Truman Track that led down to the beach. The beach below were huge and curve and the waves were coming in very strongly. The sun had yet to set so we took our time to set up our tripods and cameras and waited. 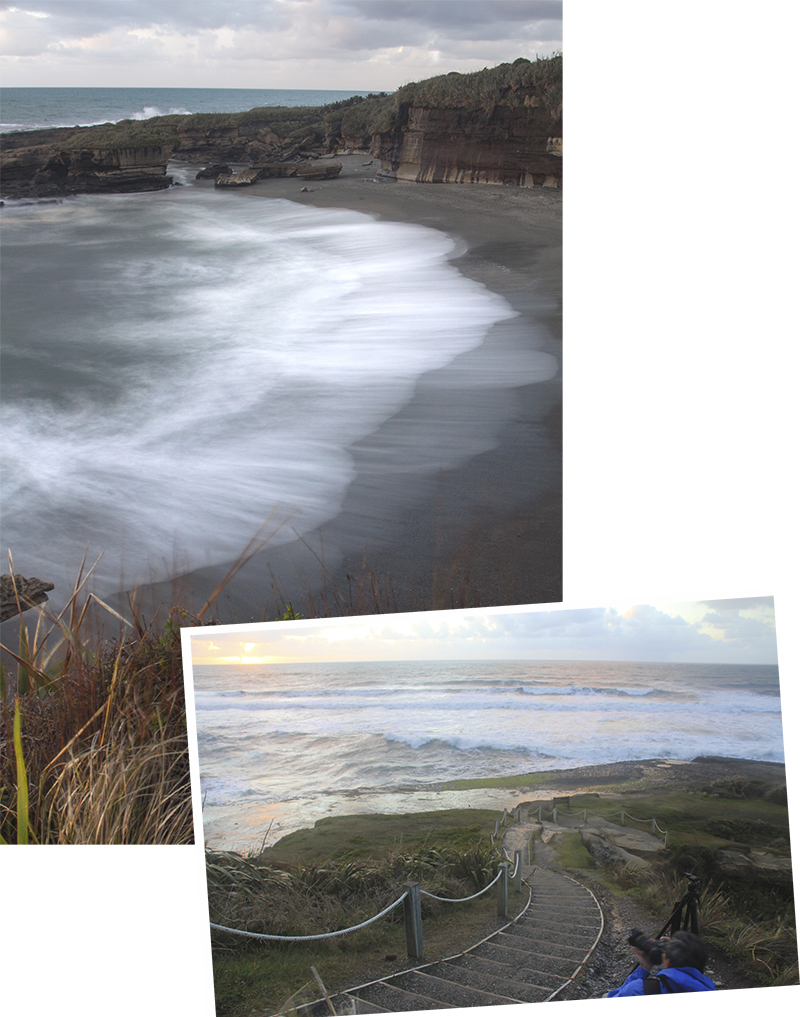 At about 8pm, the sun began to set. It sank slowly and was soon covered by a massive layer of dark cloud low in the sky. After a while the sun emerged from below the dark cloud layer before it eventually disappeared over the horizon. 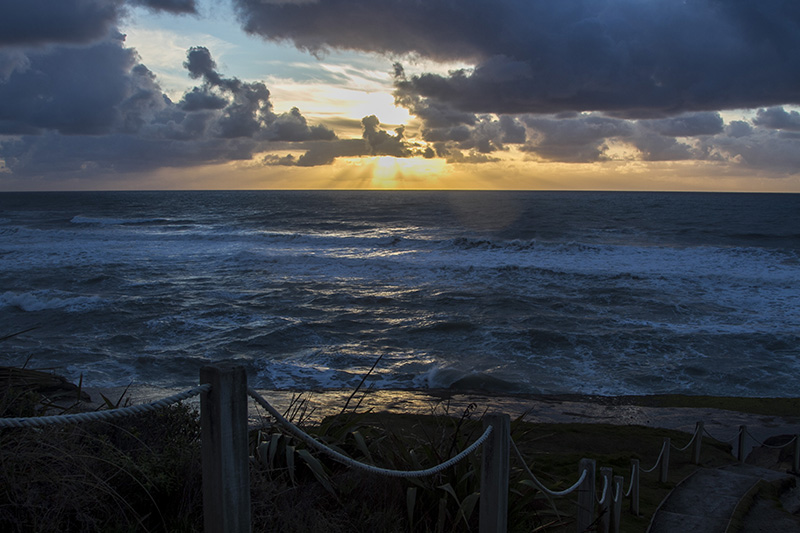 Yes, the sunset was indeed very beautiful but it was not more beautiful than many of the impossibly stunning sunsets that we had seen in Japan, in Greece and in Korea.  We were still very lucky to see the sunset as it was our very first rain-less sunset for this trip.