We planned to drive from Fox Glacier to Queenstown, it would a long drive with a distance of 330 km and an expected driving duration of 4 hours. Our drive would take us over Haast Pass, a mountain pass of the southern alps of the South Island. Along Haast Pass we plan to stop at three scenic stops, Thunder Creek falls, Blue Pools and The Neck. We hoped to reach Queenstown before sunset as we planned to go up Queenstown Skyline to have a panoramic view of the “town” before end of daylight and to stay there till the stars came up. 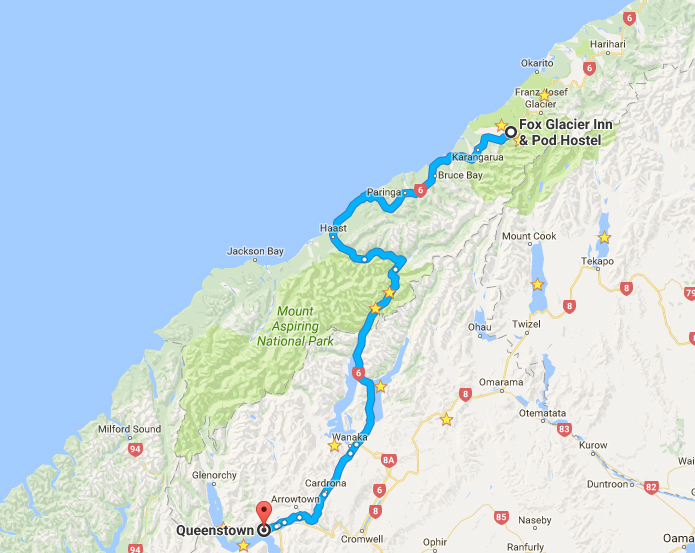 We finally arrived in Queenstown at about 7.30 pm. We started this morning at about 10.30 am an took 9 hours to complete a  4 hours journey. It was fun not to rush, during the journey we made one coffee break,  three waterfalls stops, three other scenic stops and several Pokemon Go stops to catch Pokemons.

The day started gloomy and drizzling, because of the bad weather we had to forgo one of our Haast Pass scenic stops, the Blue Pools, as we were certain that it would not be blue on a cold wet day. On the other hand, raining day was a good time for visiting water falls, the waterfalls looked more majestic and forceful.

From Fox Glacier we drove for about 120 km to reach Haast, it was a boring drive as there was nothing interesting along the way and was drizzling the whole way. Haast was the town just before the Haast Pass – Makarora Road which was supposed to be a scenic road. We just hope that the rain would not spoil the view. 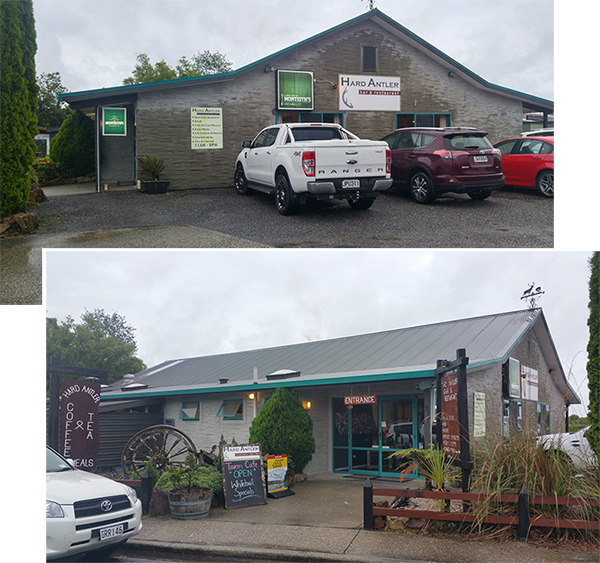 It was about noon and the bar was packed with locals. I guessed this bar was probably the town get-together place on a Sunday morning. Wow! The ceiling beams were hung full of deer antlers. In my mind, I wondered how many deer had to die just to decorate this place. Probably this country was full of deer so deer hunting was a norm? 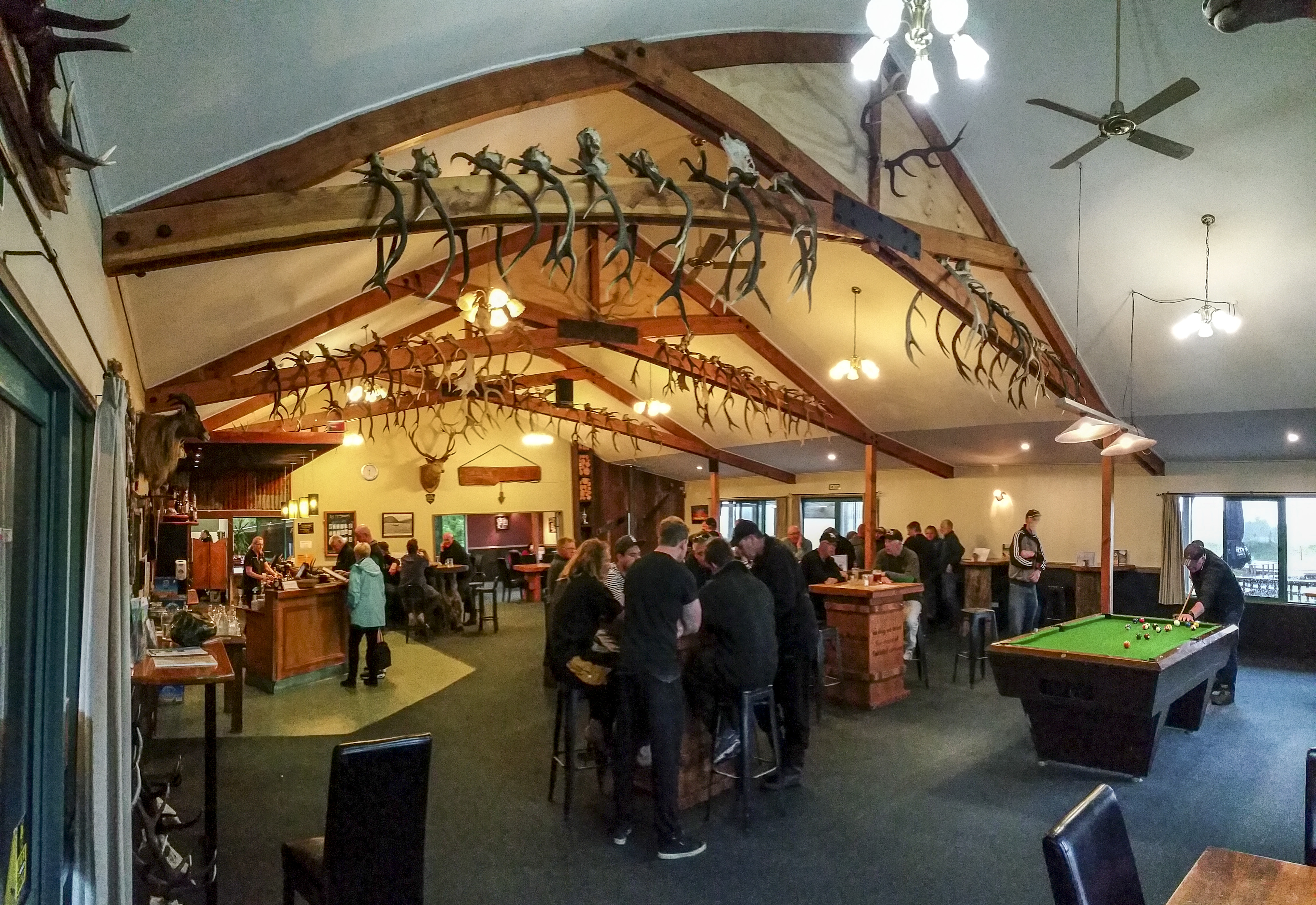 We walked over to the restaurant side to have our cafe lattes, we were contemplating if we should indulge and have cakes to go along with lattes when we saw a orange signboard near the preparation counter that said “Life is uncertain … Eat desert first”. Oh…we found our excuse to indulge! 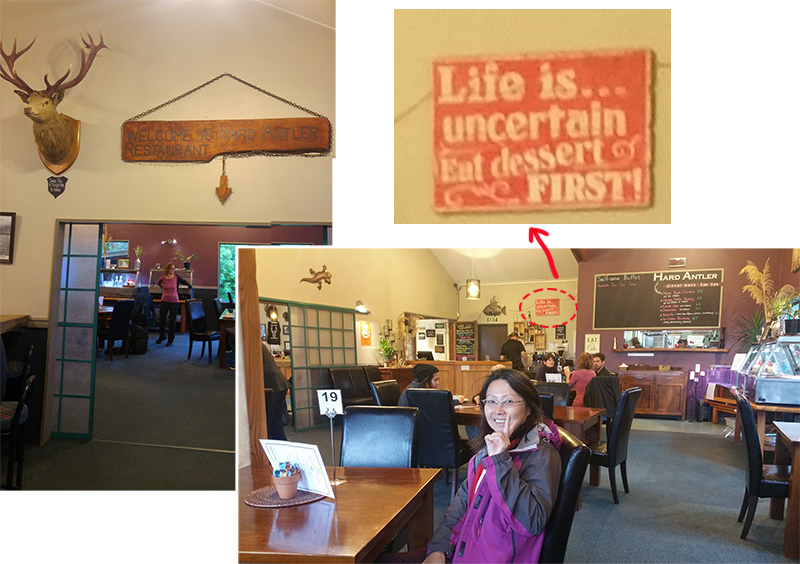 Before we left, I went to use the restaurant toilets. Once I entered the half glass door into the restrooms area I saw three other doors, the labels on the doors said STAGS, HINDS and WOUNDED. I went into the HINDS door still wondering why did this restaurant have a medical nursery room for the wounded? If was only when I was back at my seat that I realised WOUNDED  could mean HANDICAP. Toilet for handicap? 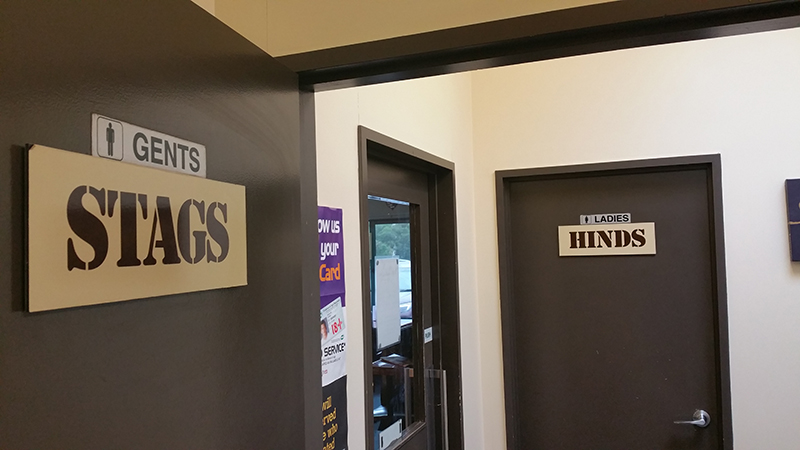 Some 27 km from Hard Antler Bar & Restaurant along the Haast Pass – Makarora Road we saw a signboard pointing to Roaring Billy Falls walk. Roaring Billy Falls was not one of our planned stop, but by its name it sounded like an interesting falls so we made an impromptu stop. There was a round-about carpark just before the start of the walk.  It was a 1 km (20 mins) return trip. Since it was drizzling we had to put on our raincoat before going for the walk. 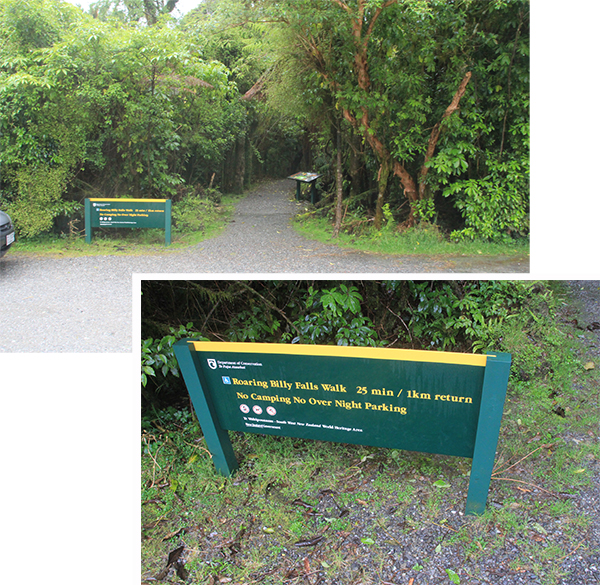 The walk passed through a canopy of tree branches and after a short distance we came onto a huge open gravel river bed. The gravel bed of Haast river was very wide, the river was flowing at a distance away and it looked safe for us to walk onto the gravel bed. 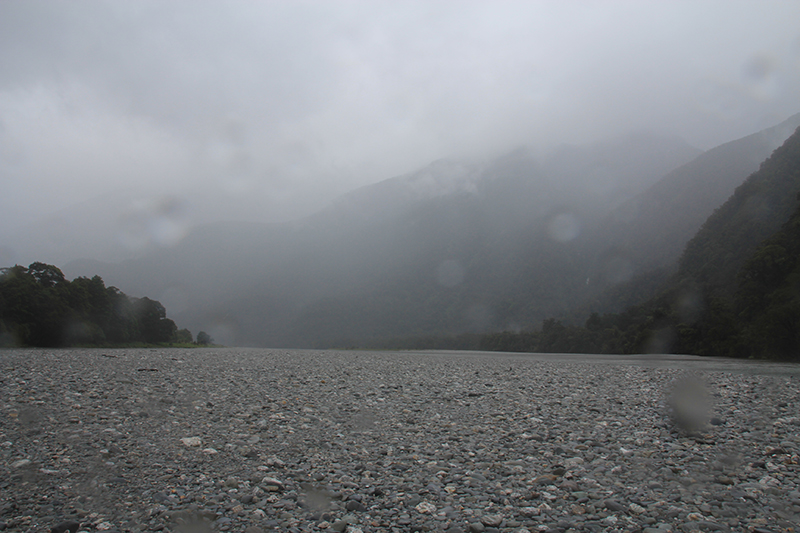 We walked along the gravel river bed and saw a thundering water falls cascading over the slope of the hill across the river. The falls was indeed roaring very loudly and doubly loud with the additional volume of water contributed by the rain. 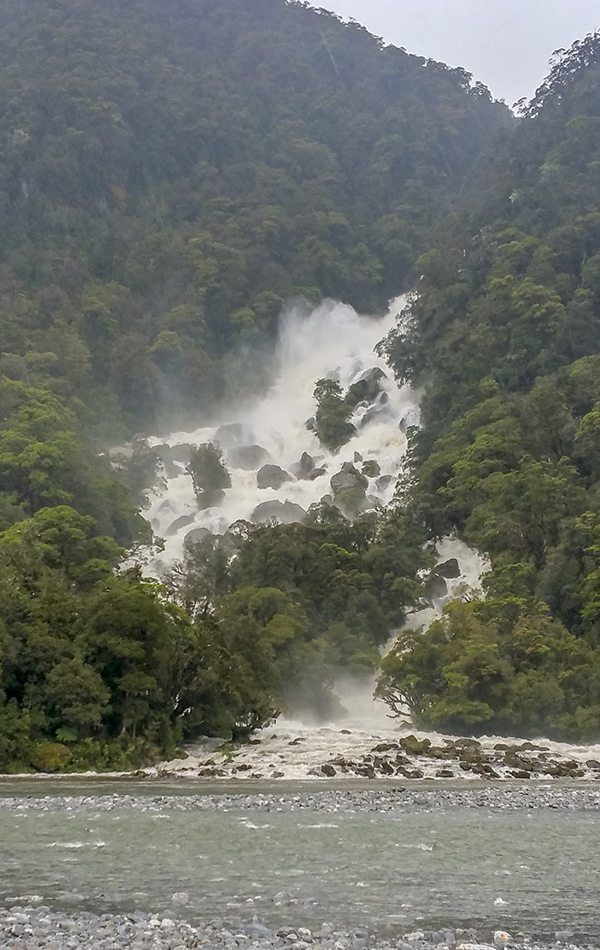 The falls was not very tall, it was more wide than tall and its water came charging out among the vegetation at the mid level of the slope opposite the river. We walked as close to the river edge as possible to have a better view of the falls. It was amazing to see several trees clinging steadily on the rocks as water plummeted all around them. 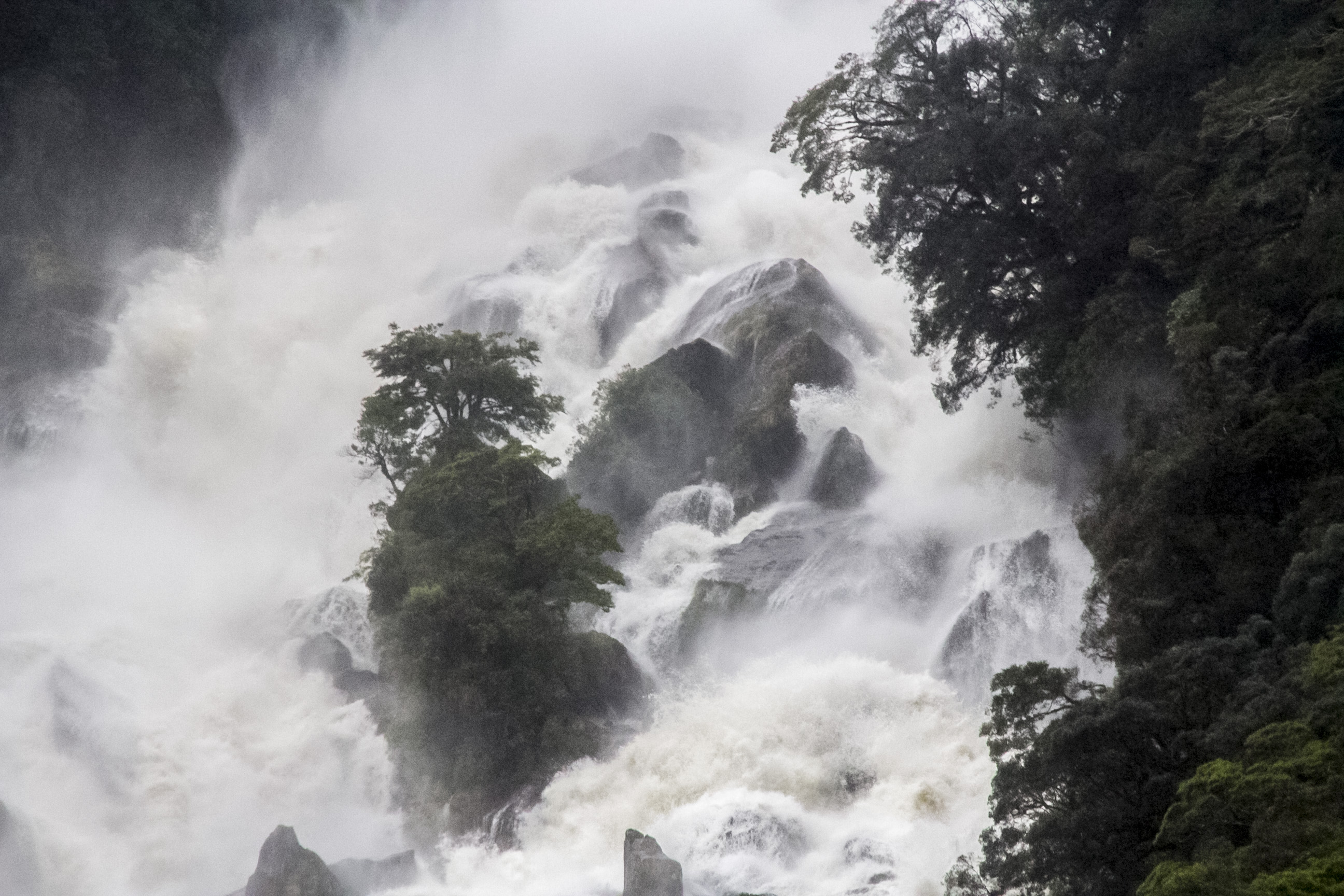 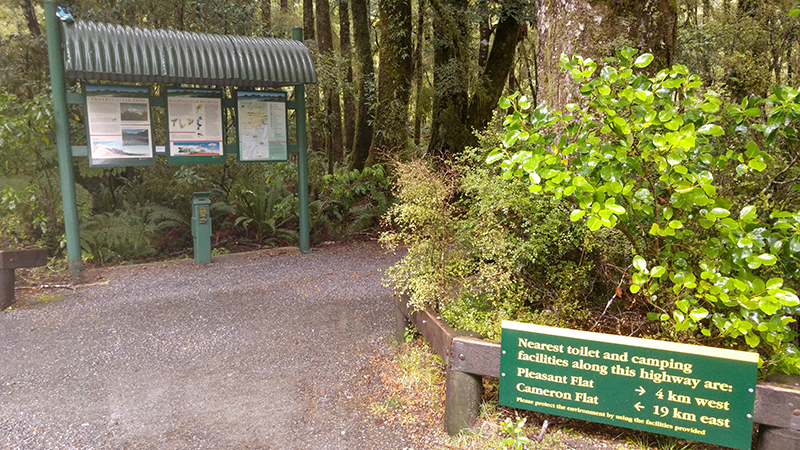 Entrance to the short walk to Thunder Creek Falls

It was a very short walk before we reached a wooden stairs. To view the falls we had to walk down the stairs to reach a viewing deck that looked over a river. The falls was across the river, it was tall and very straight. Both Roaring Billy Falls and Thunder Creek Falls emptied into the Haast River. While the river section at Roaring Billy Falls was shallow and slow flowing, the river section at Thunder Creek looked treacherous and fast flowing. 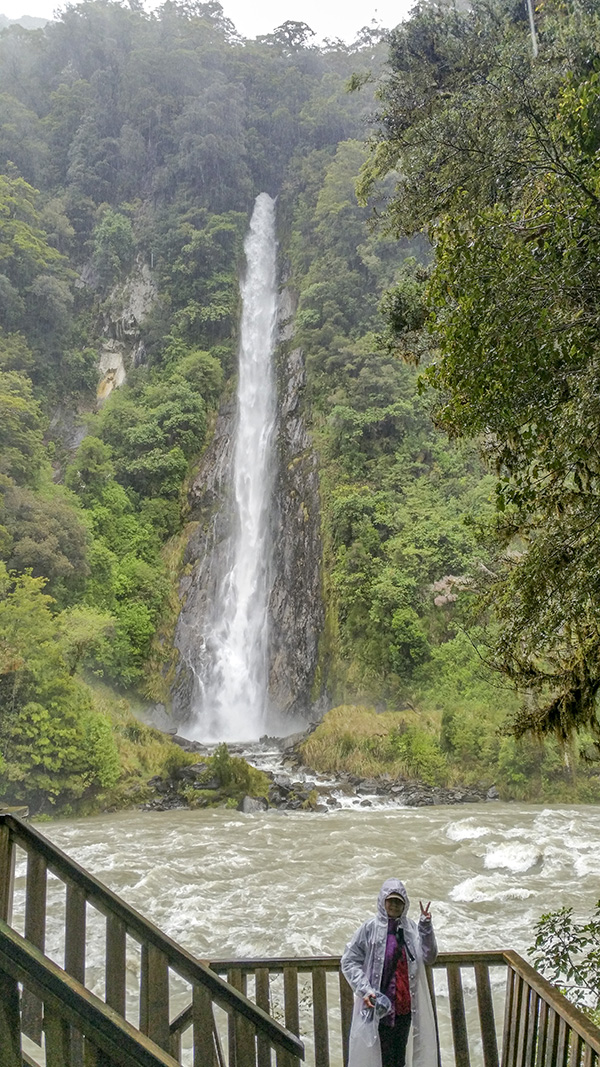 Fantail Falls was the third falls we visited on the Haast Pass – Makarora Road, it was just 6 km from Thunder Creek Falls. The name of the falls sound interesting so we decided to visit it. It was still drizzling and getting heavily by the hour. It was increasingly difficult to put on and take off our wet raincoats at every stop. Our DSLR cameras were getting wet too. If only there were sheltered walks to the falls it would have been fantastic. This was my first time seeing waterfalls under raining condition and I must say the cascading water definitely looked more forceful and “wilder”. 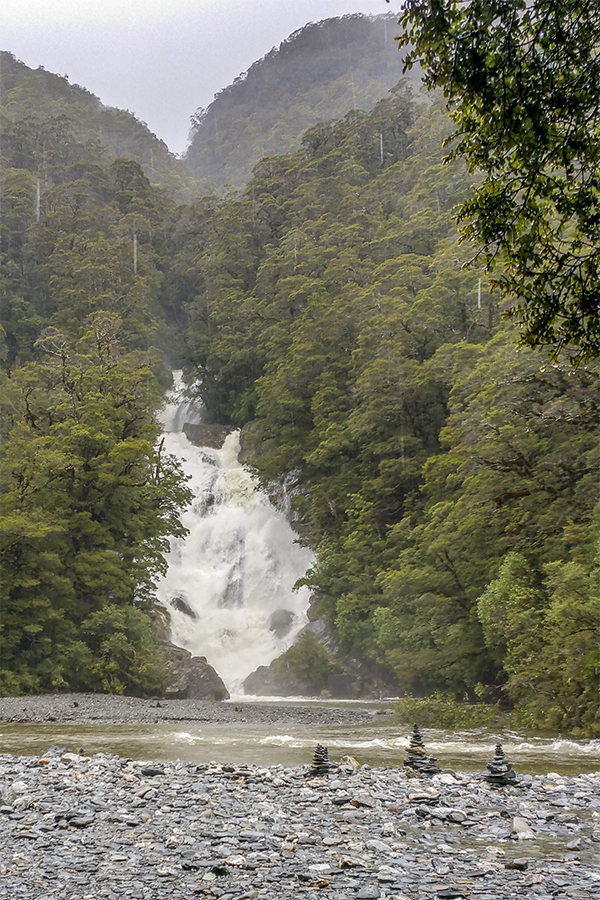 Blue pools was about 14 km from Fantail Falls. It was one of our planned stop, unfortunately by the time we reached the start of the walk to the Blue Pools, the rains had turned for the worst. The walk from the road to the pools was about 1 km (20 mins) and we were just not up to walking 1 km in the rain. So we decided to forgo the visit to Blue Pools. On a raining day with gloomy sky the pools would not be blue so it was pointless to visit the Blue Pools.

From Blue Pools walk to The Neck was about 34 km, by the time we reached The Neck the rain had stopped but the sky was still gloomy. The Neck was located on then narrowest part of the land that separated Lake Wanaka in the west side and Lake Hawea in the east side. 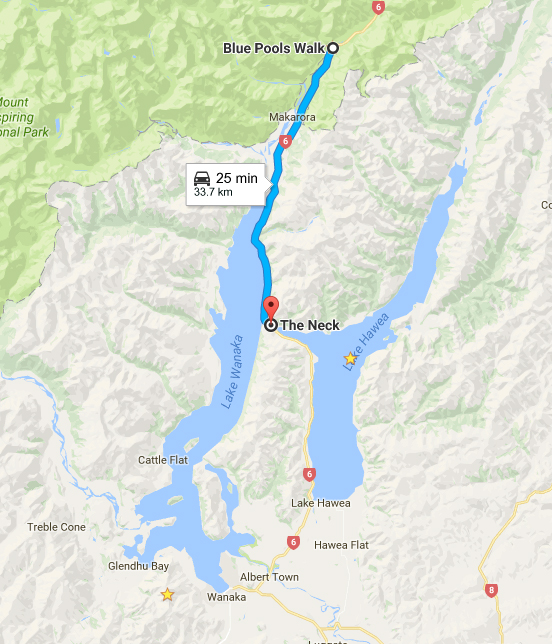 Location of The NecK

The Neck was a scenic view point that would have looked spectacular on a bright shining day. Today the gloomy sky dulled the colours of the greenery, the lake water and the mountains. 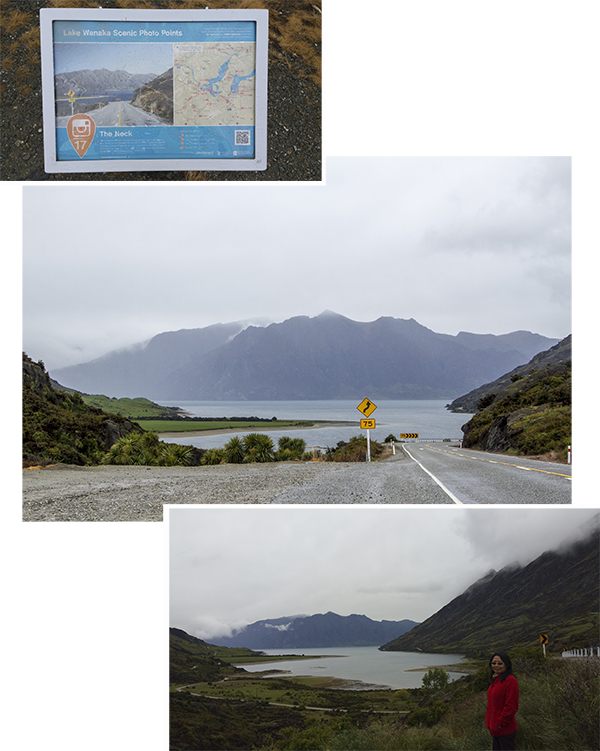 Along the bank of Lake Hawae we saw large patches of yellow, on closer look they were yellow lupin! Lupin bloomed in  late November, so I was keeping my fingers cross hoping that we would not be too early for lupin. We did see some lupin growing by the roadside but they were usually a few stalks here and there, nothing like such a huge abundant of lupin flowers. 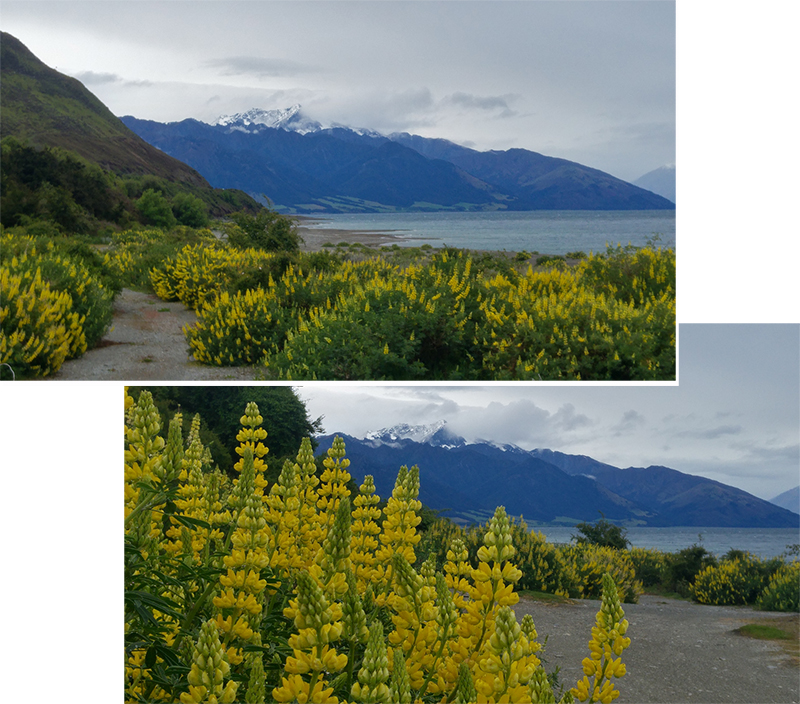 After leaving Lake Hawae the landscape changed. We drove passed mountains that were covered by the million and million of brown patches. These patches were tussocks. It was fascinating to see a whole landscape of brown golden tussocks. 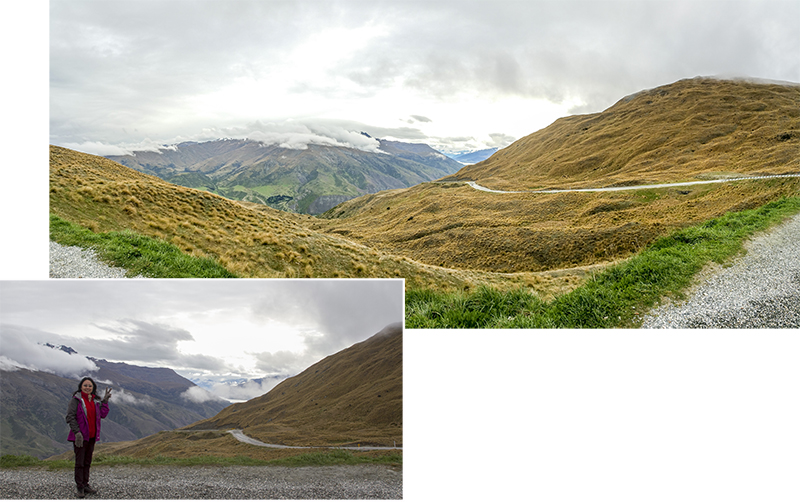 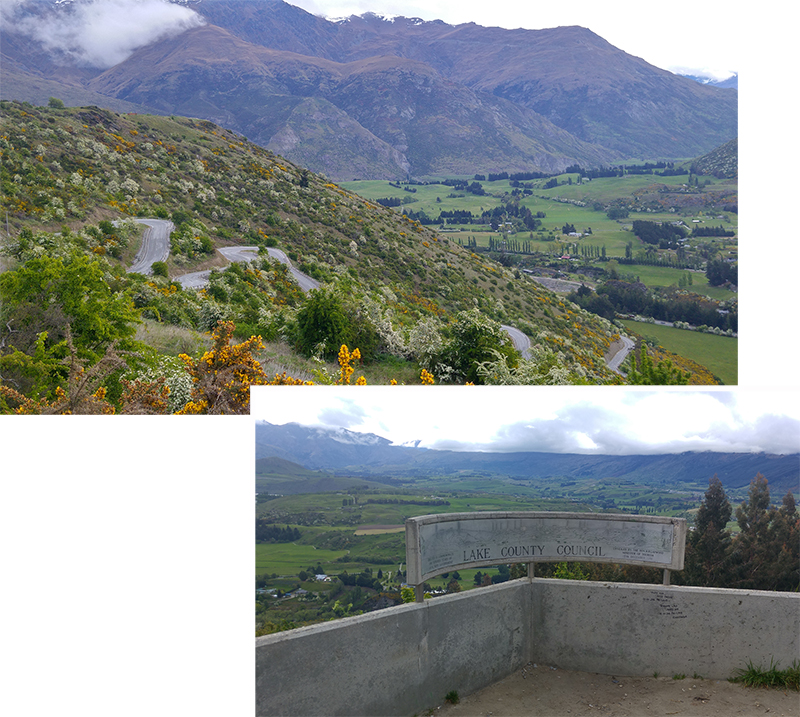 Unfortunately we had planned to be at 450 m above Queenstown, on the upper gondola deck of Queenstown Skyline during sunset today, so we would not stay to watch the sun set over Arrow Town.

We arrived in Queenstown at 7.30 pm, check in and dropped our luggage at our hotel. It was a good thing that there was no rain in Queentown and the sky was clear and blue. We drove over to Queenstown Skyline and at 8.15 pm we boarded the gondola. Our gondola ride costed NZD $33 per person for a return trip. 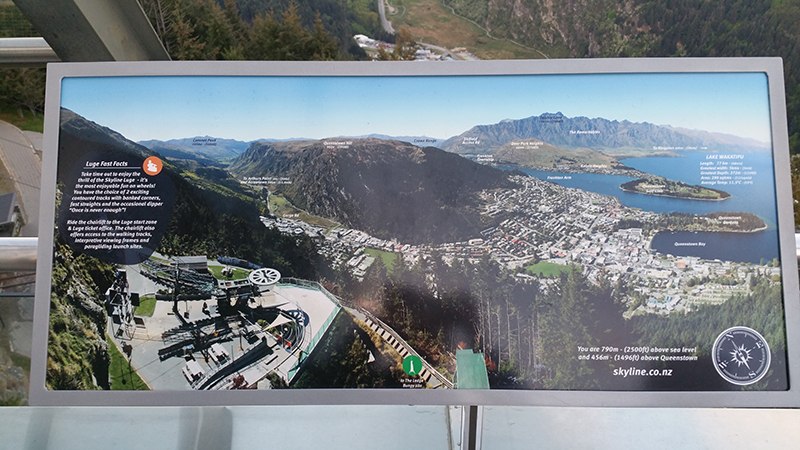 At 8.30pm the sky was still bright and sun had yet to set. The view of Queenstown at 450 m above was stunning. From the Skyline we could see only half of Lake Wakatipu. 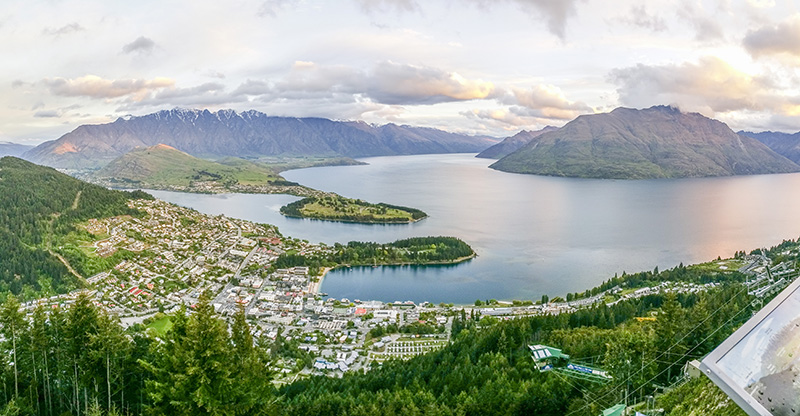 View of Queenstown from the Skyline Upper Deck

I set up my tripod and positioned my camera at the location where I wanted to take Queenstown as the sun set. As for Yat Thong he wandered around the upper deck, taking shots of Queenstown from various angles. I was a lazy photographer. Once I found a good sport I would not want to move. I preferred to stay put and press my shutter occasionally and one of these many shots will surely turn out great. 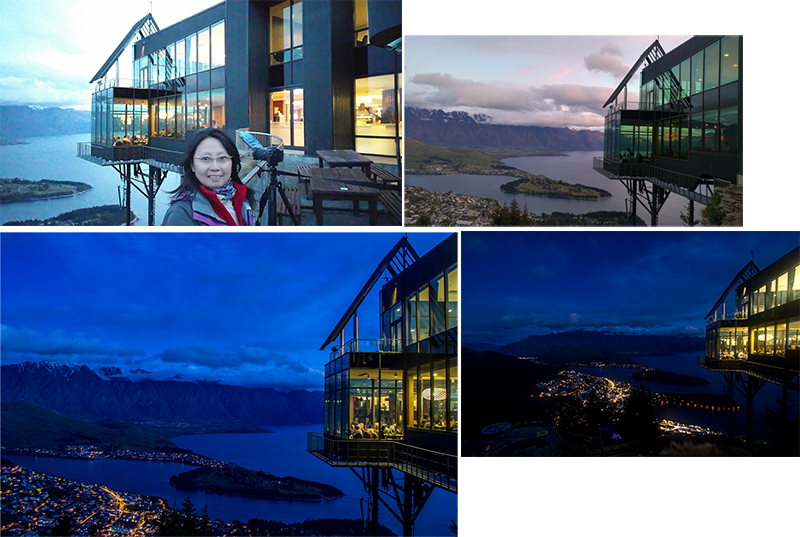 We went down on the 2nd last gondola. We were delayed because my tripod was “hijacked”. A Chinese man with a China Chinese speaking accent borrowed my tripod. He wanted to photograph the stars and needed a tripod, unfortunately once he got my tripod he held on to its for over 30 minutes. I had to tail him around as I was afraid he was going to make off with my tripod. To take beautiful night scene, a tripod would be needed, if I was to lose my tripod in the middle of my trip it would be a disaster.

By the time we were down at the lower station of the gondola it was over 10.10 pm. The night was cold and the place was quiet. BUT POKEMONS were springing up everywhere. Queenstown was a pokemon heaven!!! 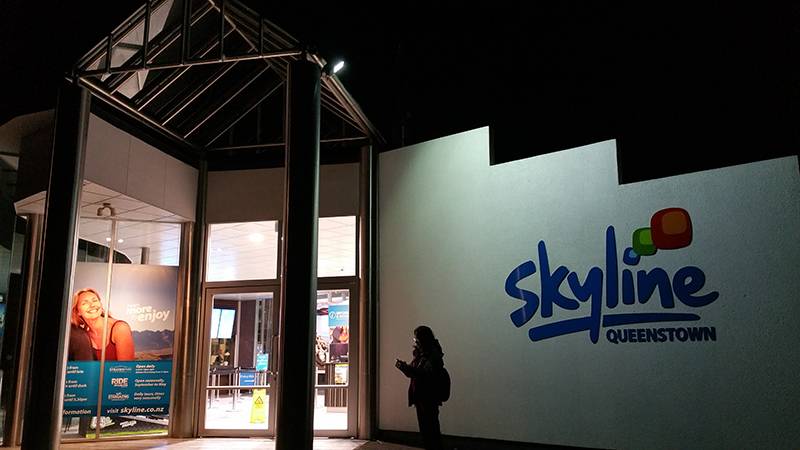 I booked Queenstown Sherwood Hotel for NZD$137 a night. It was relatively cheaper than other accommodations around Queenstown. I had this hotel chosen as its compound and rooms looked pretty decent online (Booking.com) and I was not disappointed.

It was an old hotel which was recently refurbished. What I enjoyed was the wide spaces around the hotel and the eco friendly renovation thoughts and design that went into its reconstructions. 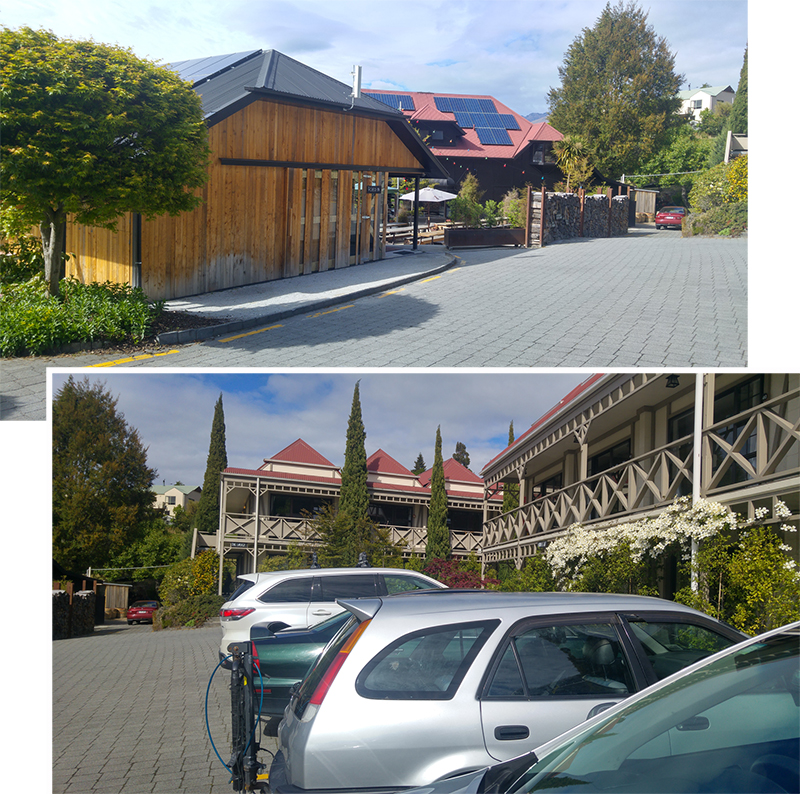 Our room was reasonably large. It had two huge queen size bunk beds and the ensuite toilet had a huge bathtub. We liked the room so we requested for another night of stay and the guy at the reception quoted a discounted price for the extension. Nice!!! 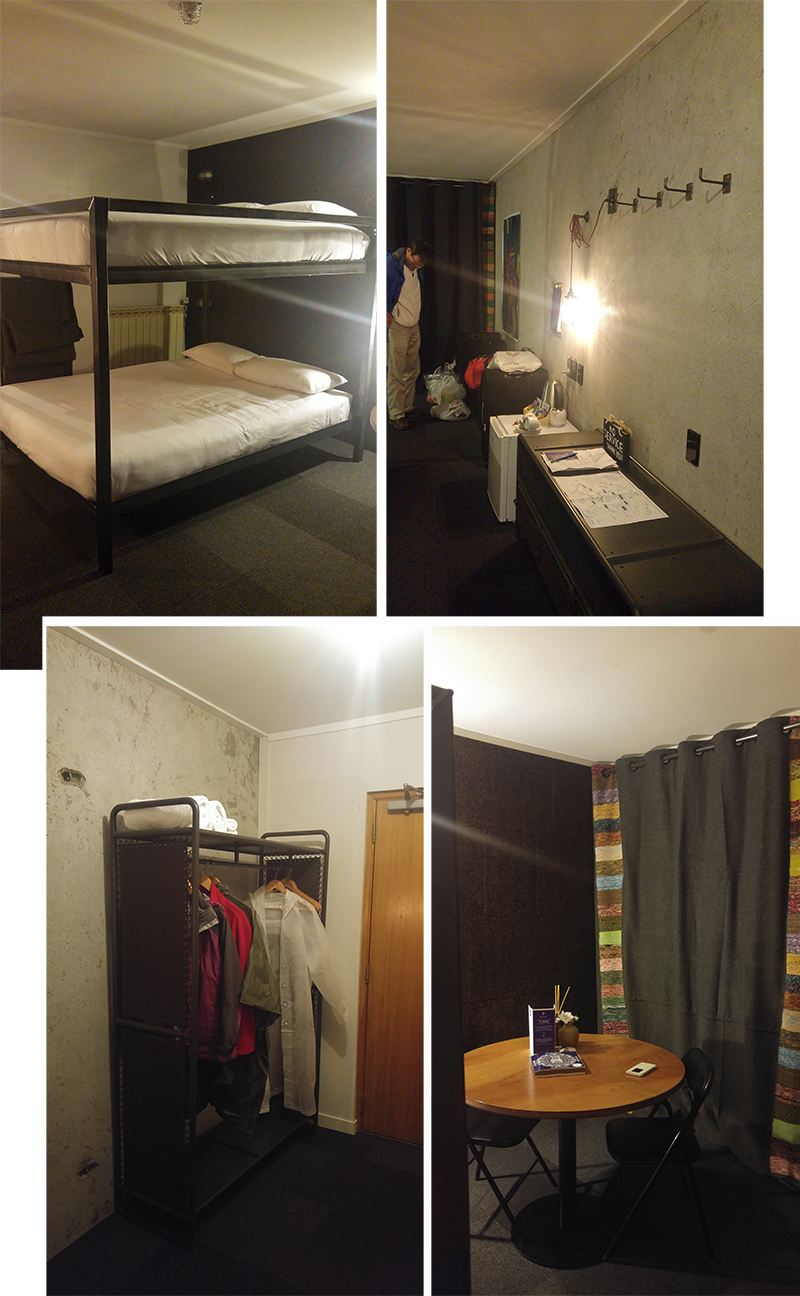 Our room for two at Queenstown Sherwood Hotel 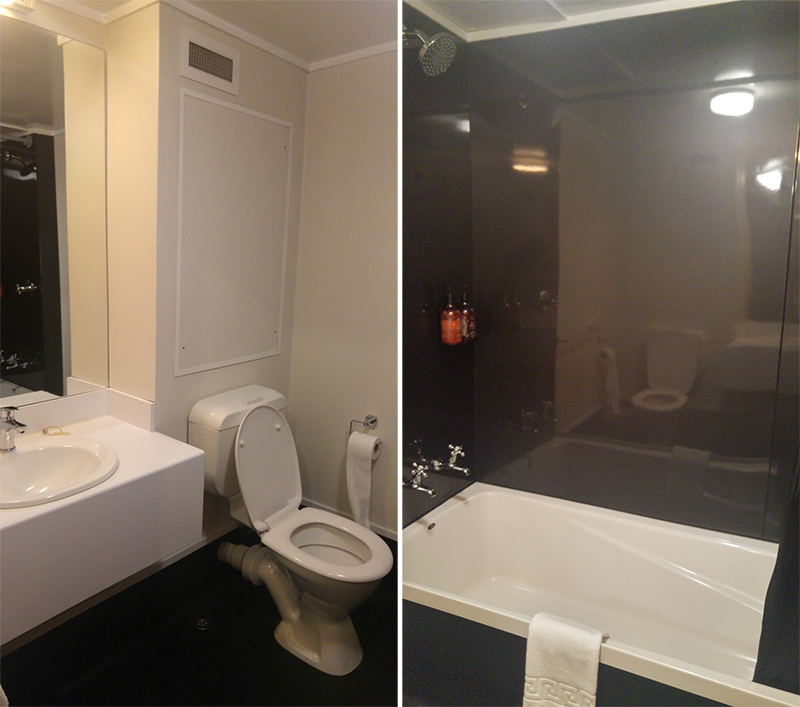