The plan for the day was to visit six places. They were

For the night we would be staying at Hillview Campsite & Backpacker which was very close to both Cannibal Bay and Nugget Point Lighthouse. The entire length of the route for today was about 120 km, not too long very manageable. 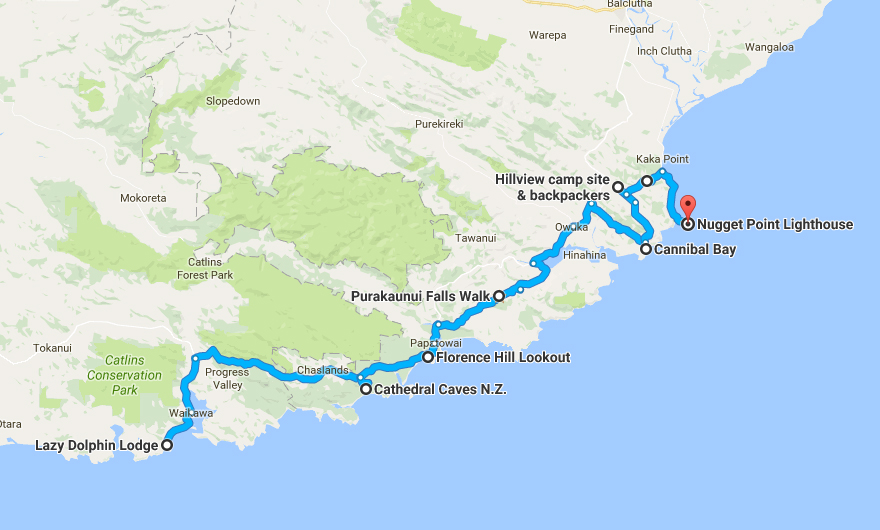 By 8 pm we reached Hillview Camp Site & Backpackers. We still had not visited Cannibal Bay and Nugget Point Lighthouse and since the day was getting late we decided to visit these last two attractions the next day.

We did a lot of back tracking today because of the late opening time of Cathedral Caves. Our forward driving route was disrupted because when we reach Cathedral Caves just after noon the place was closed and the opening time was 5 pm. So we had to go forward to visit Florence Hill Lookout and Purakaunui Falls. The further forward we drove would mean the more backward travelling we had to do to return to Cathedral Cave at 5 pm. So after Purakaunui Falls we stopped going forward to the next attraction, instead we stopped at Owaka town for a coffee break before returning to Catherdral Caves. 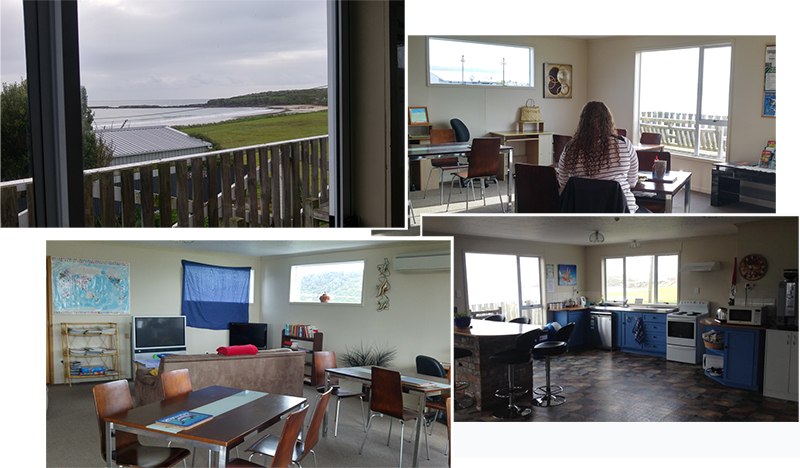 We took our cameras and stuffs and walked down to the bay to photograph the dolphins. A group of dolphins could be seen swimming parallel to the shoreline of the bay from one end to the other. Unfortunately they were no longer in their playful mood so we did not see any somersault jumps. 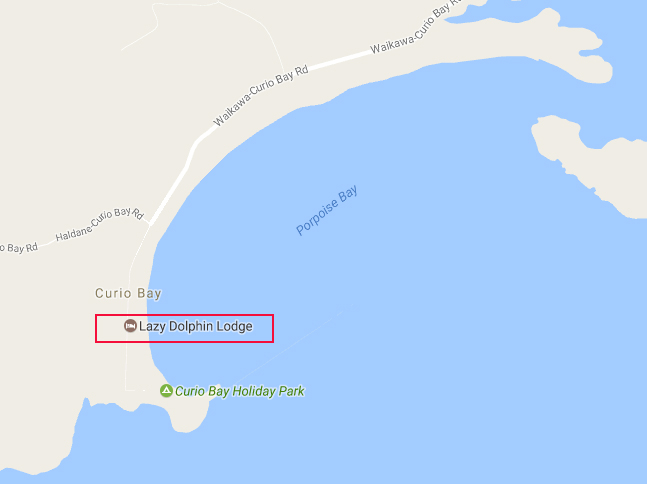 We walked along the shore line tracking the dolphins as they swam, it was a pity that they were swimming a bit way far out from the shoreline. I came fully prepared to stake-out  for a few hours to see the dolphins, I wanted to see them jumped again.

Waiting for the Dolphins at Porpoise Bay

These dolphins were Hector Dolphins and there was a population of about 20 that were residents of Porpoise bay. We found out from the receptionist of Lazy Dolphin Lodge, who came in this morning, that these dolphins could be seen frequently playing in the water almost everyday but she was unable to tell us which parts of the day would be a good time to be down at the beach to see these dolphins. Luckily we had set aside an entire morning to be at the beach and surely we would be able to spot the dolphins. 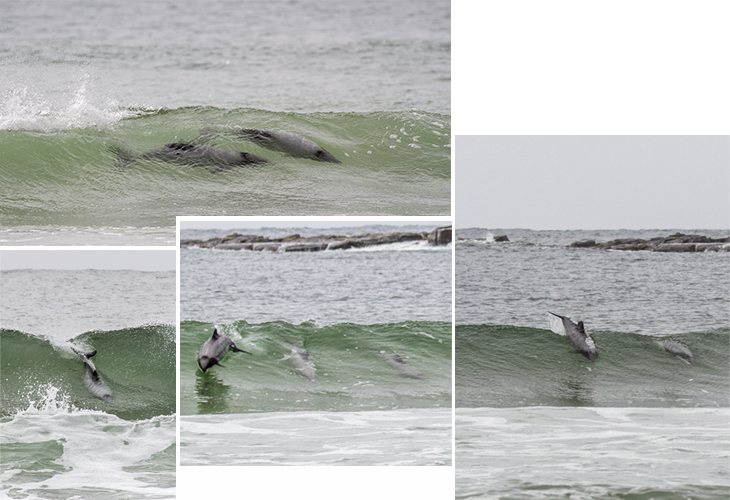 I was lamenting to Yat Thong that the water was just too cold for me to consider going into the sea as I was sure that only then would the dolphins be curious enough to swim nearer to the shoreline. Well my “theory” was definitely proven right when a group of surfers came by, the moment they got into the water the dolphins swam close to them to play and interact!

Dolphins coming near to the surfers at Porpoise Bay

That morning, though I did not get close to the dolphins, I got close to another mammal. A dog and one extremely excited huge puppy, they came out from one of the houses facing the bay. The puppy was charging at full speed up and down the shoreline of the bay. When he saw me he just changed direction and “galloped” toward me and pounded on me, not to bite but to play, kicking sand all over my camera and backpack. 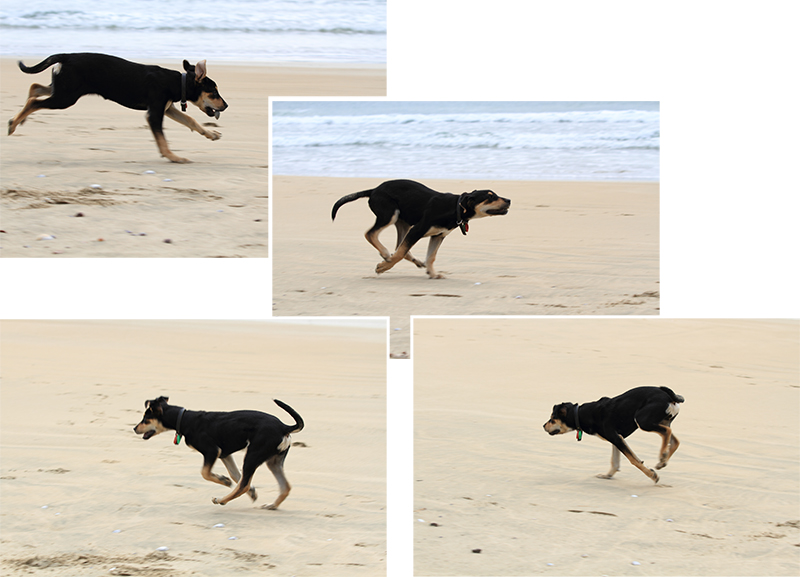 A huge puppy charging all over the place at Porpoise Bay

Luckily, I was not the faint-hearted type, I had pet dogs before so I did not drop everything and run on seeing a dog charging toward me. I was able to wrestled it onto the sand to keep it from licking me all over. 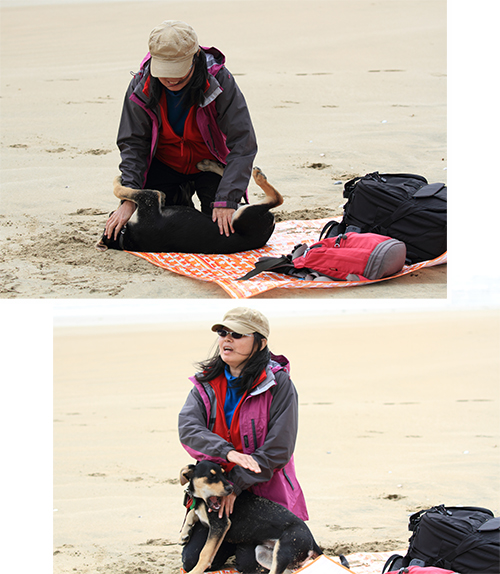 From Purakaunui Falls carpark it was a 10 minutes walk to the Falls. Strangely as we walked through the thick forest growth the atmosphere felt colder and colder. We went down some steep steps and finally we reached the viewing deck of the falls. 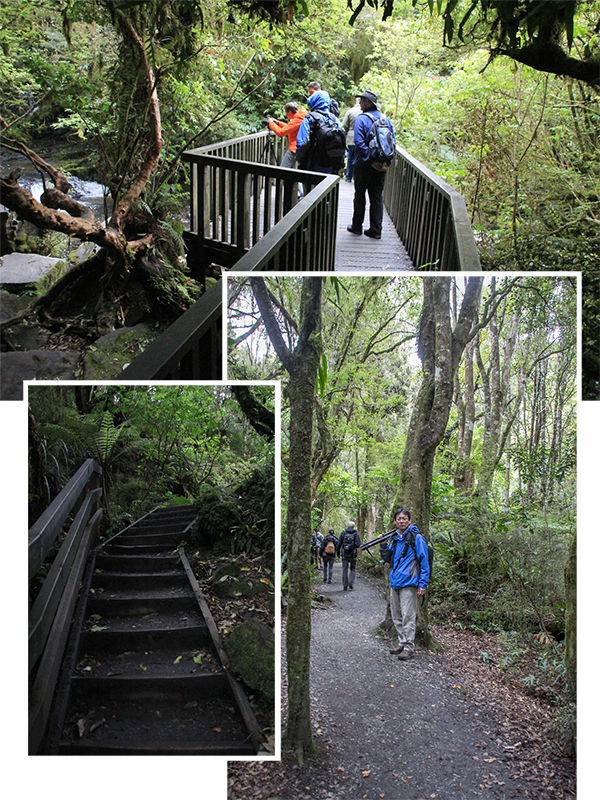 Walking path to the Purakaunui Falls

The falls was smaller than our expectation. It uniqueness was its many levels of drop. It would have been more beautiful if there was more water cascading down the falls. We were probably arriving not at its best time of the year. 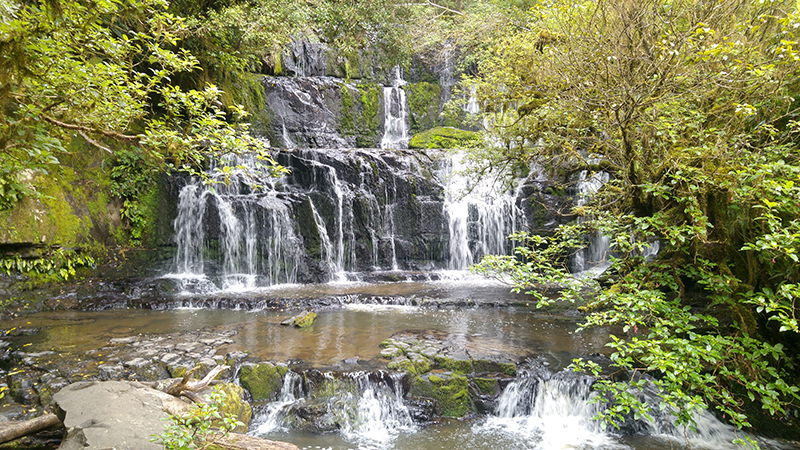 There were several water falls in this region but after looking at their pictures on the internet, we felt that Purakaunui Falls was the best. The “best” falls was a bit of a disappointment so I could only imagine that the rest would not be impressive either. 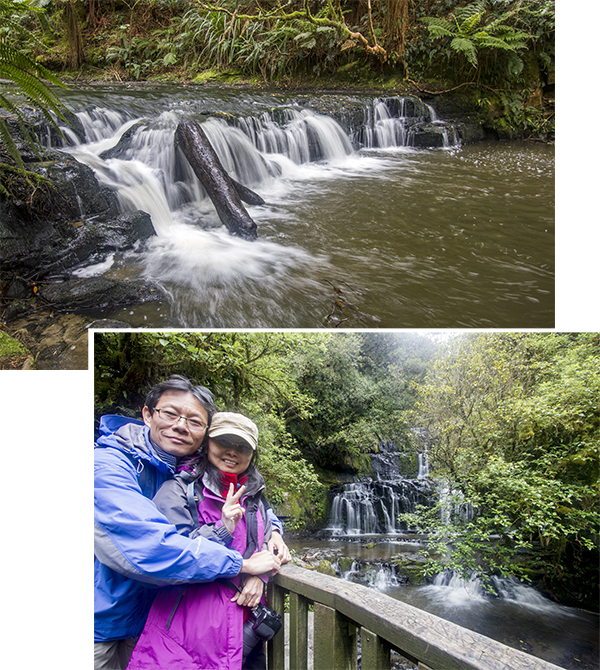 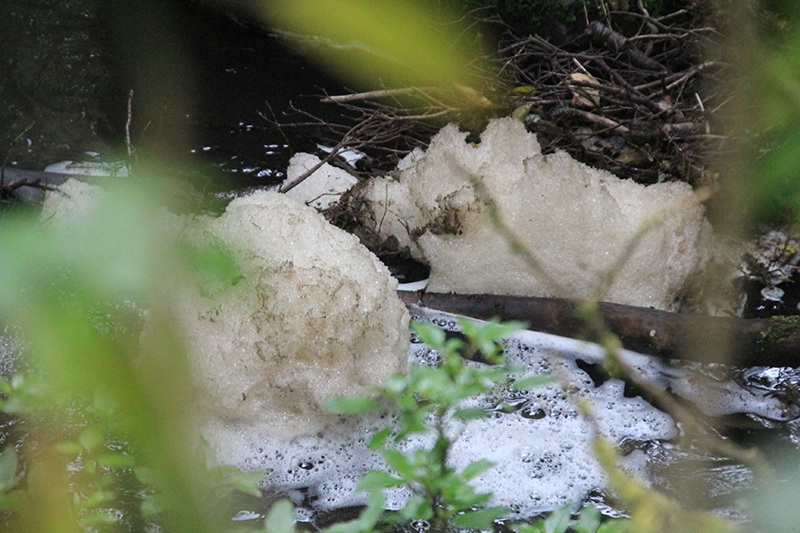 Ice chunks trapped between the branches of fallen trees

Earlier in the day, just after 12.30 pm, when we reached the road turnoff to Cathedral Caves carpark, the road was barricaded by a large gate. Outside the gate a signboard stated that the road (2 km) to the Cathedral Carpark would be opened at 5 pm. 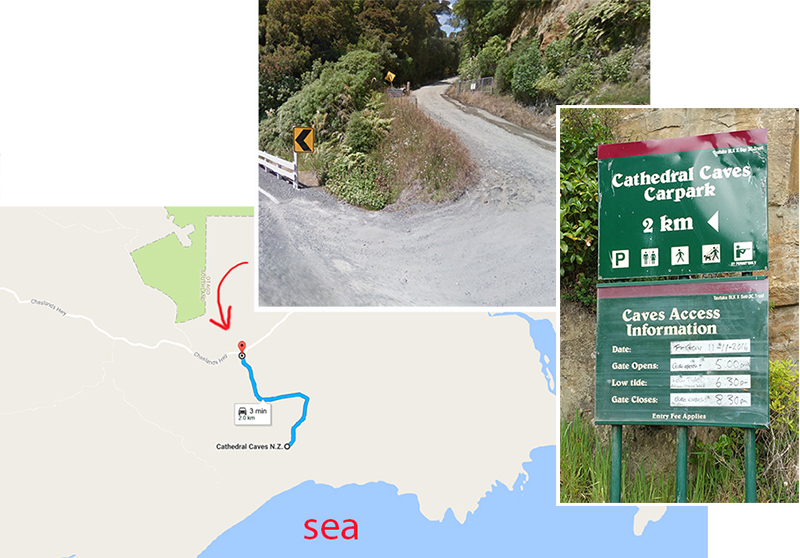 We were back to this road turn-off again at 5.10 pm and thankfully the gate was unlocked. We drove for about 2 km to reach a carpark. There were already several cars at the carpark. An attendant was seated near the start of a dirt path collecting NZD $5 per person for visitors who wanted to proceed. This was the first time we had to pay an admission fee to visit a nature site in New Zealand!

The path led us downhill through a dense forest and after about 30 minutes of walking (about 1 km) we reached a wide open flat beach. To the left of the beach we saw this gigantic rock-land and from afar we could see the shape of a cave at the front of the rock-land. 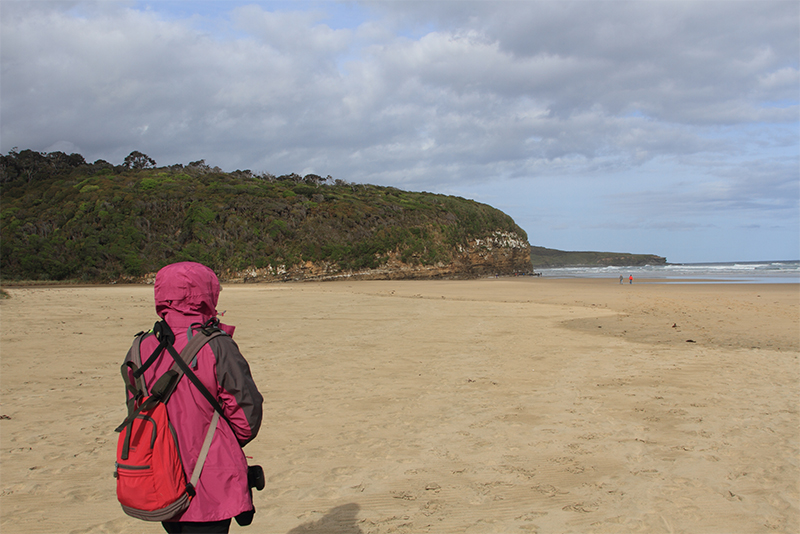 When we were nearer to the rock-land we saw that there were actually two caves. One narrow and the other very broad and both caves were very huge and tall. We entered the first cave which was the narrower one. 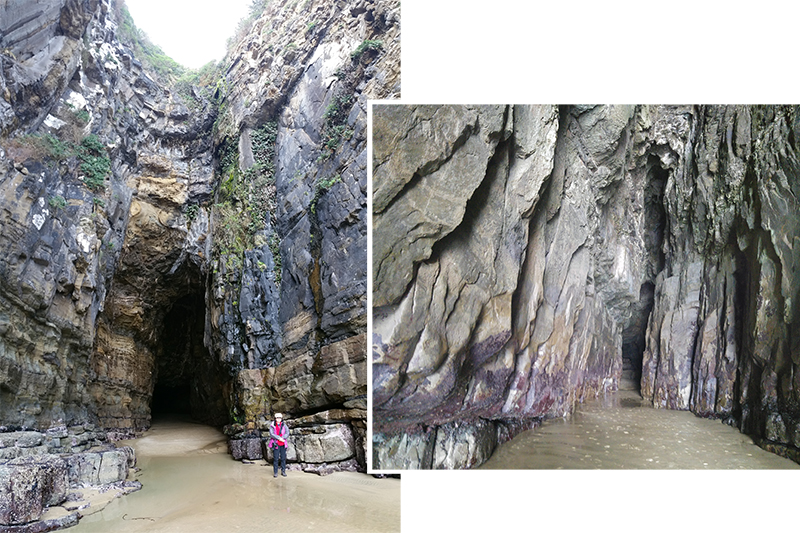 The narrower cave at Cathedral Caves

The sides of the cave narrowed upward to meet at the top, just like a cathedral? I walked deeper into the cave wondering where it would end. I did not have to go far before I had to make a right turn and after the turn I found myself in the “belly” of the second cave, the broader one. So both the caves were interconnected. 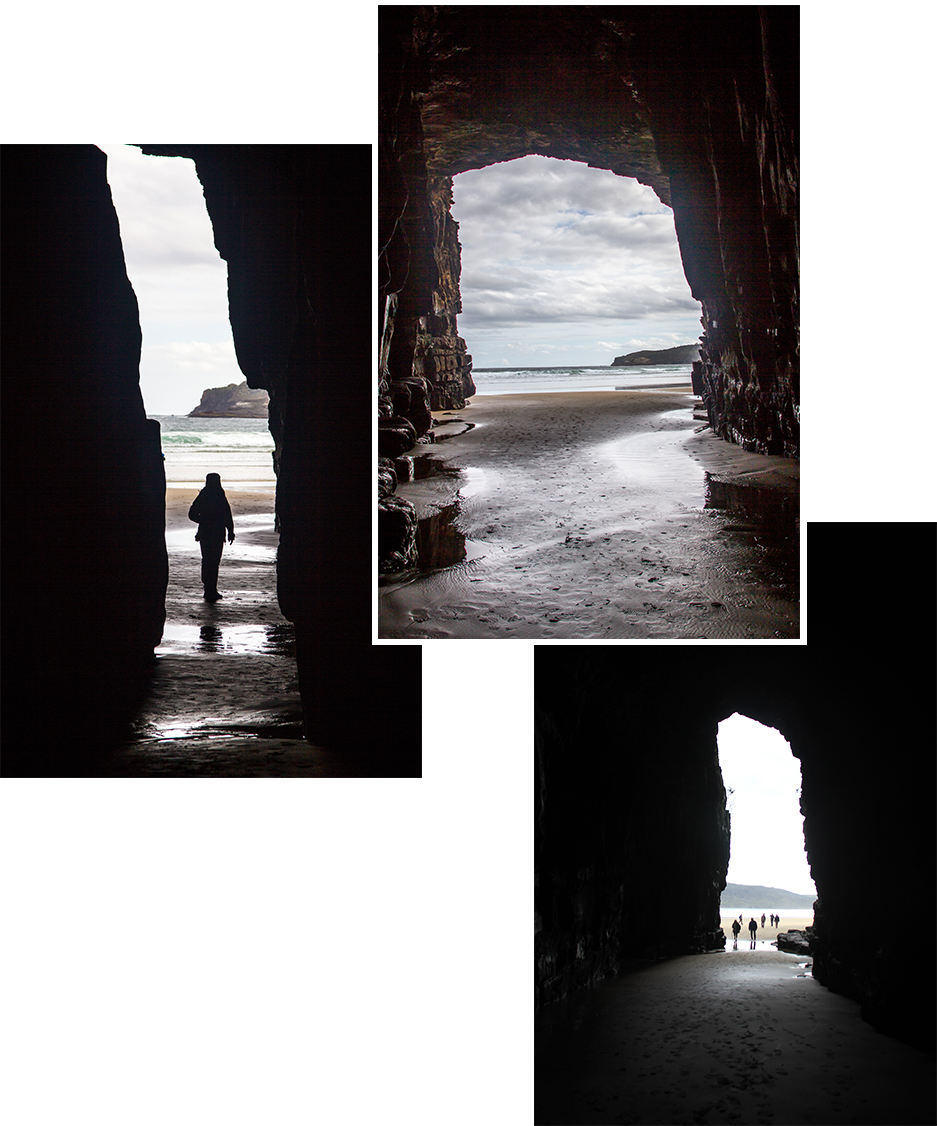 Looking out form the “belly” of the interconnected caves

Access to Cathedral Caves was opened to visitors from October to May each year and only near low tide timing. The visit was limited from two hours before low tide to one hour after low tide. Looking at the beach I could imagine that during high tide this entire flat beach would be flooded by sea water. 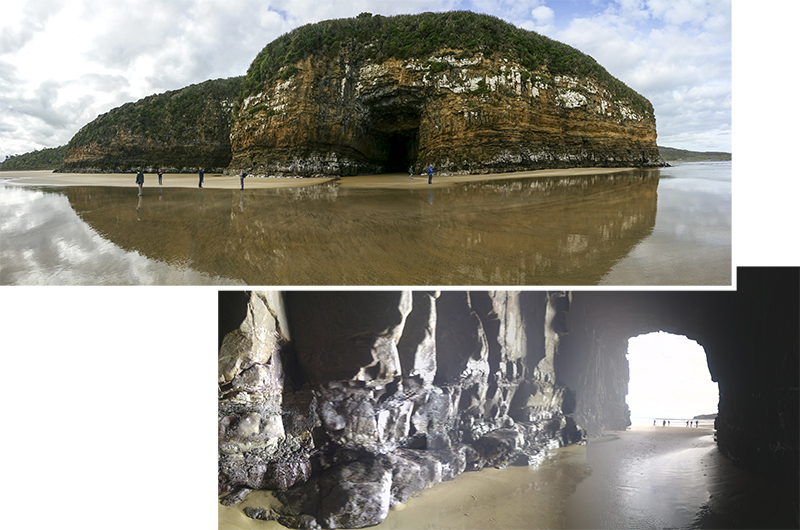 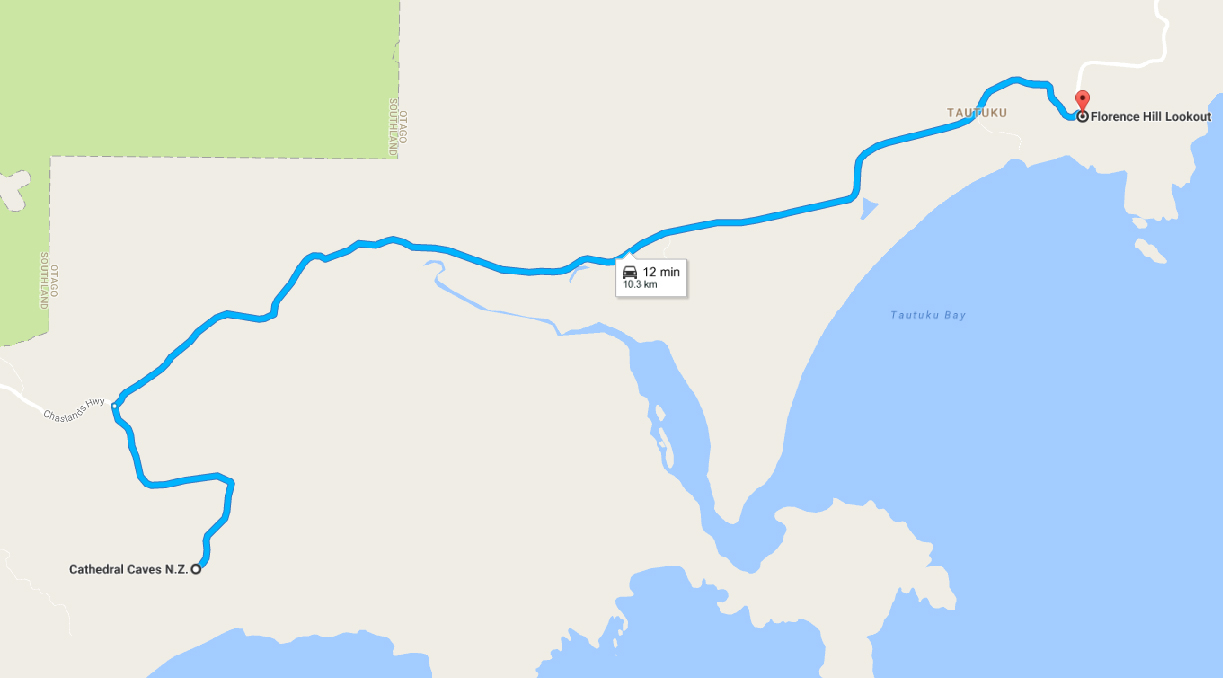 The lookout looked down to TauTuku Bay, a flat, wide curve bay. Pleasant by nothing spectacular just a clean sandy bay. 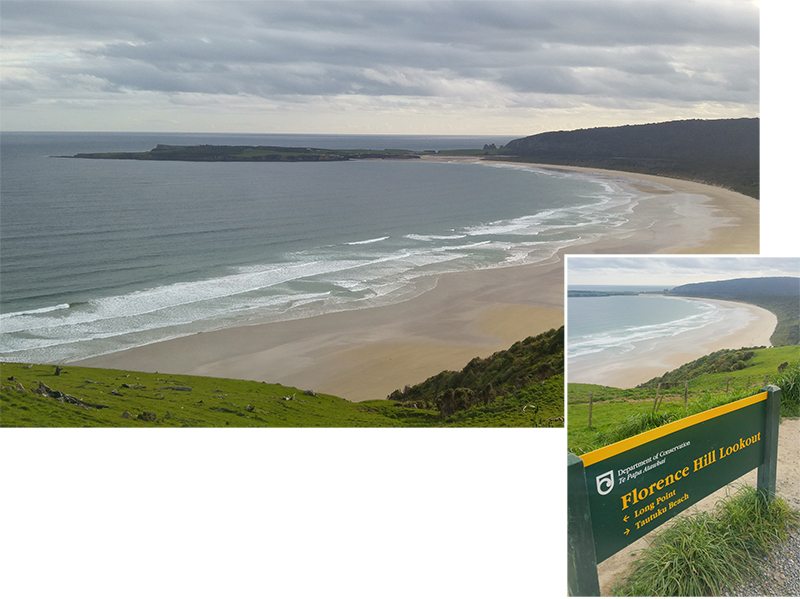 We had booked Hillview campsite & Backpackers just two days before arriving at the campsite. The decision to choose this campsite was because it was near to Cannibal Bay and Nugget Point Lighthouse. If necessary and possible we might visit Cannibal Bay and Nugget Point Lighthouse in the evening and again in the morning the next day. So putting a night up at Hillview Campsite was the obvious choice.

At the entrance to the campsite there was this huge “Free Internet” sign which was very encouraging. We went through the gate into a huge campsite and drove up to the main house where Kevin Boam  (the owner) and his family lived. 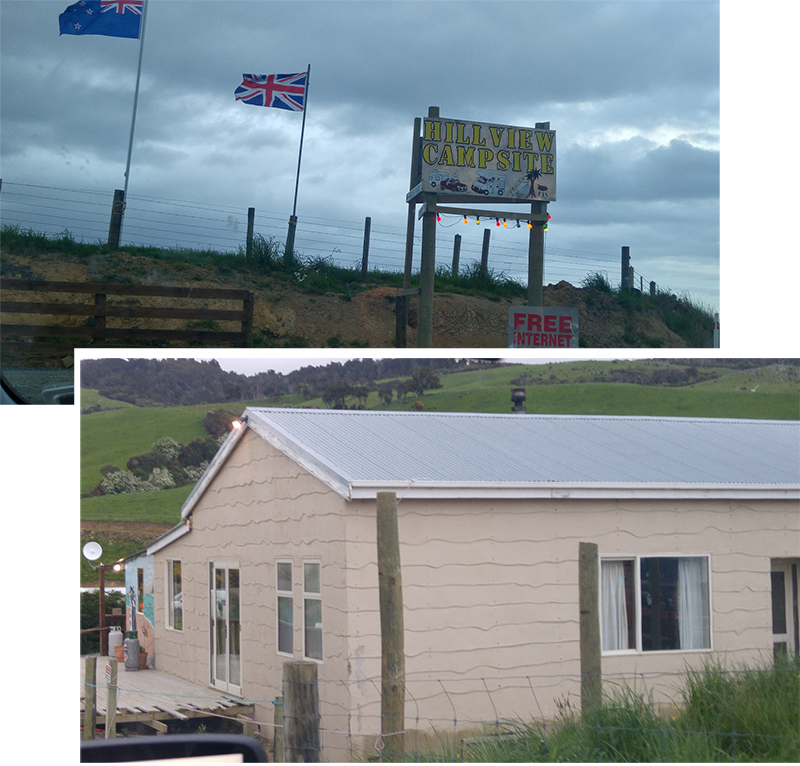 We met Kevin and paid NZD $60 for a container-room for two persons. The price include free shower and toast for breakfast for the two. Kevin gave us our passwords for wifi access. Unfortunately after 5 to 10 minutes of surfing my husband wifi access got cut off. Anyway we had our “SMART” data sim card so we did not bother to check with Kelvin on the wifi issue. 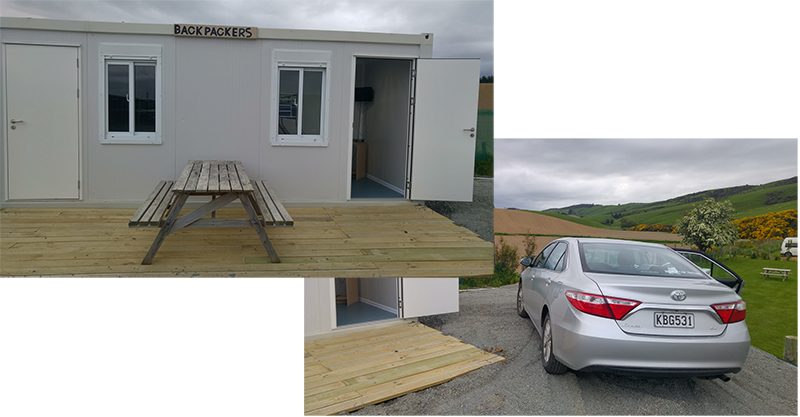 Our container-room was one half of a full size container. It looked okay on the outside and inside. Though it was clean and tidy it was very “not homely”. No blankets or pillows were provided. No hooks were available for us to hang up our jackets and clothes. So almost everything was left on the floor of the container.

We switched on the heater as it was cold, unfortunately the running heater somehow created this slight vibration that caused a constant dull uncomfortable humming in our ears. It could be due to the enclosed space. When the door was closed it felt stuffy. We wanted to open the window to provide better ventilation unfortunately we could not because there was a lot of flying insects. It was a shame that there was no anti-insect netting on the window. That night we did not sleep well at all. 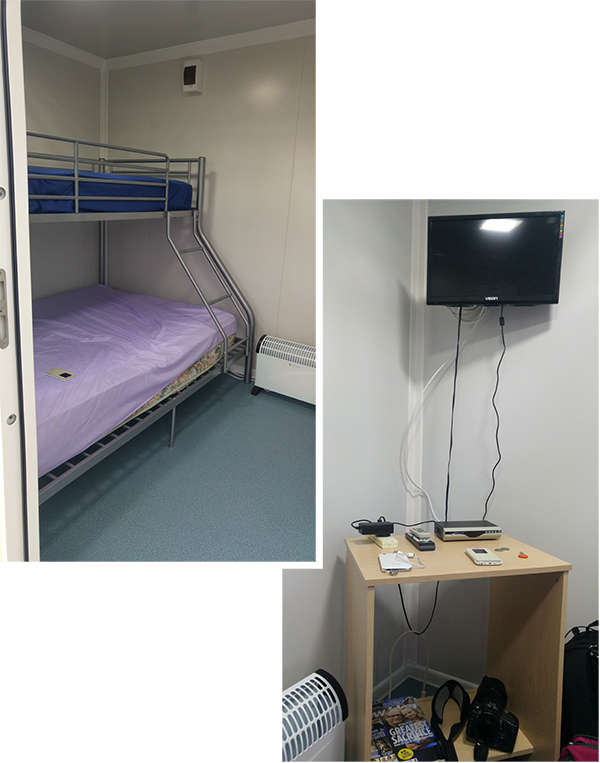 Our container-room at Hillview Campsite and Backpackers

On the website of this Hillview Campsite and Backpackers there was this announcement that a kitchen was now available for all guests to use. Unfortunately, cooking dinner at the “new” kitchen was a huge issue, it was hardly “usable”. There was a blocked sink, with filthy water filling up to the brink! To wash a plate or a cup I had to wait a long while for the filthy water to subside a little before turned on the tap to wash it. There were metal cooking pots but there was no stove!! What was the point of providing cooking pot then? Or was I expected to bring a portable stove? It took me a  long while to cook penne pasta using the microwave.

The campsite was in the middle of nowhere, no cafe or restaurant nearby. The food that we had in the trunk of our car all needed to be cooked! It was so misleading to announce a “new” kitchen when all it was, was a huge container-room with a blocked sink, two small microwaves, two picnic tables and a drink vending machine inside! Thinking back, the kitchen would have been considered passable if the sink was not BLOCKED with disgusting waste water. Rinsing plates and utensils and washing food over the filthy water was nauseating.

We were so glad that we only need to stay ONE Night!!!!