We would be visiting Nugget Point Lighthouse and Cannibal Bay in the morning and in the afternoon we would drive to Lake Wanaka where we had already booked a room at  Wanaka Hotel for two nights. The distance travel was estimated to be about 325 km. 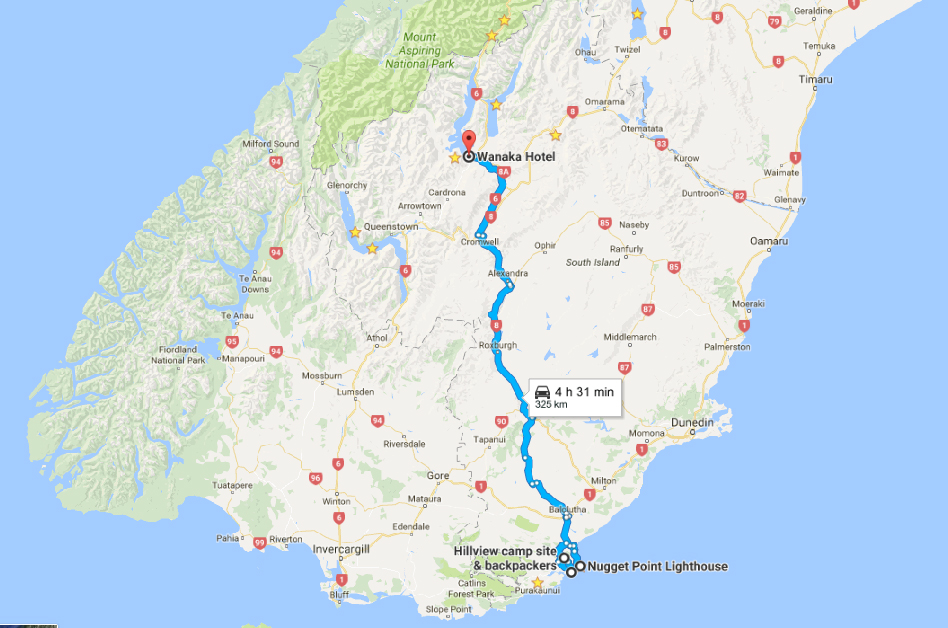 Route for the Day

We reached Lake Wanaka at about 9 pm, three to four hours behind our expected timing. The drizzle in the morning and the unexpected extra long walk to and from Nugget Point Lighthouse delayed us. By the time we left Cannibal Bay it was near 4 pm. The drive from Cannibal Bay to Wanaka was 260 km and since we were not in a hurry, we took a couple of breaks during our journey and ended pretty late at our hotel in Wanaka.

Our accommodation package at Hillview Campsite & Backpackers of NZD $60 included coffee, toast and cereal breakfast for two. Both Yat Thong and I disliked cereal so Kevin replaced it with two more pieces of bread. I supplemented the campsite breakfast with our own bacon, tomato and salad. Yummy, yummy… now the breakfast spread looked so much more appetizing.

This morning the “new” kitchen seemed and smelled fresher with the sink unclogged and all the previous evening mess cleared up. 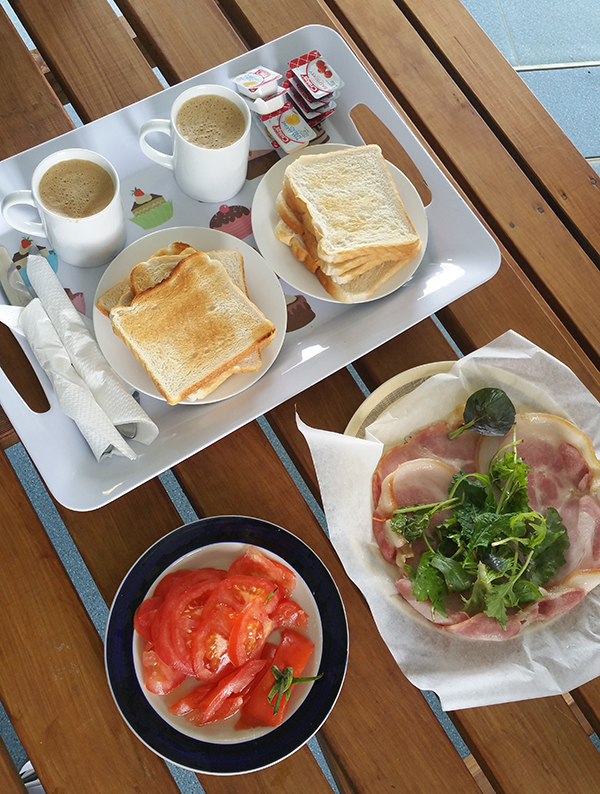 We set out from Hillview Campsite at about 10.30 am, and took a slow slow drive to Nugget Point. The distance from the campsite to Nugget Point was only 14 km and the journey could be completed in less than 20 minutes. It was raining so there was really no reason to reach Nugget Point early as we would have to sit in the car to wait for the rain to stop.

That morning the rain was very fickle minded. One moment it was drizzling badly then it was gone and then it came back again and this repeated over and over again.  Soon we reached the coast and drove along the coastline toward Nugget Point. From faraway we could already see the lighthouse. It was on a peak near the end of a cape.

We were on our way to a carpark  nearest to the lighthouse. From the carpark it would be a 1 km walk to the lighthouse. Unfortunately about half a km from the carpark, the road was barricaded and we were told by some workmen that they were waiting for the rain to stop to start some road maintenance work. We managed to find a parking space by the side of the road and waited in the car for the drizzle to lighten up. After a while we saw the workmen packed up and left. 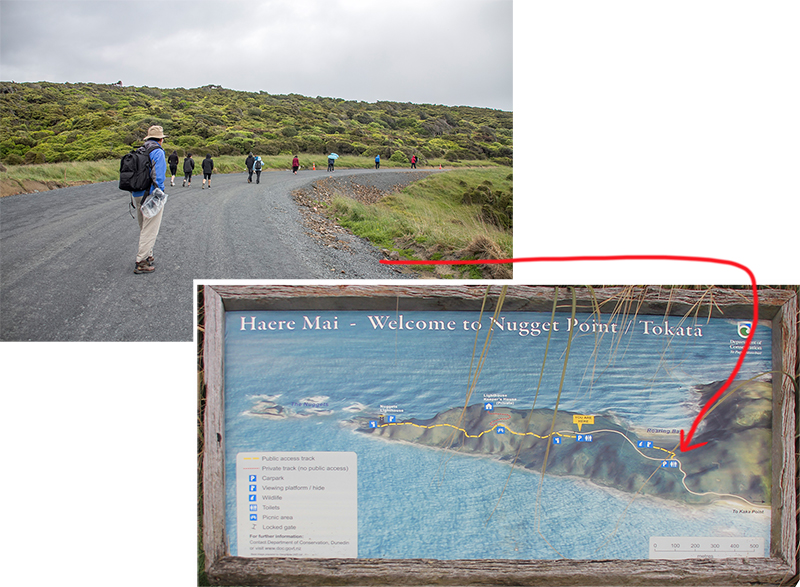 A 1.5 km walk to the lighthouse

Once the drizzle lightened we started our walk to the lighthouse. As we proceeded we did not see any unfinished roadwork along the way or any “bad” road sections that needed maintenance. We reached the carpark and found it in good condition and empty! The roadwork department should have lifted the barricade before they left so that visitors needed not walk the extra distance in the drizzle!!

Finally we were able to see the long windy cape that led to the lighthouse. This place reminded me of a similar “dragon” looking cape which had a lighthouse at its end, Cape Kamui in Hokkiado (http://www.jaiktravelblog.com/2015/07/24/day-15-cape-kamui-to-otaru/). 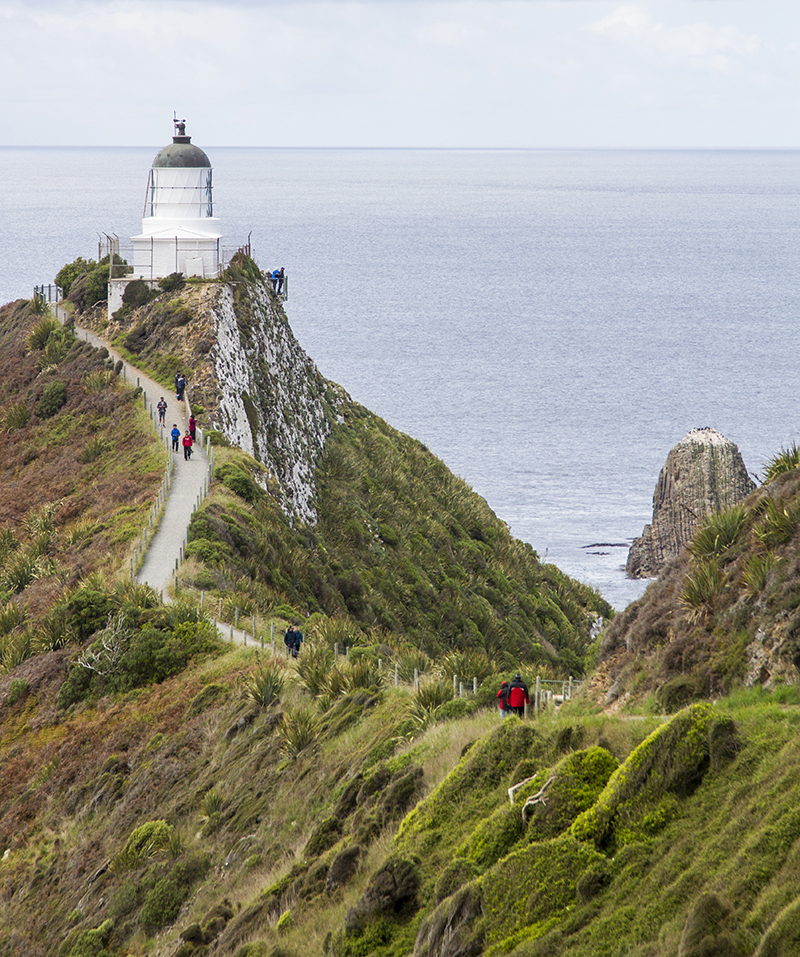 It was a very interesting walk as we could see many wild lives at the base of the slope. We saw a group of seals. They were not easy to spot and we had to point out a few of them to the other visitors who stopped next to us wondering what caught our attention. 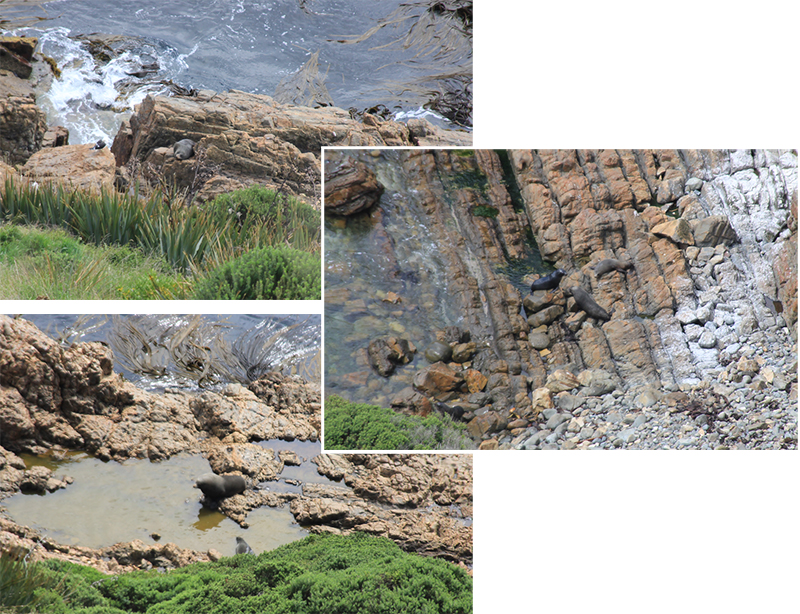 Group of Seals at Nugget Point

As we walked on we also saw some dolphins swimming and leaping out of the water as they swam by the side of the cape. It was a shame that by the time I aimed my camera at them all the actions were gone.The most exciting sighting was a small lone whale swimming by the cape. It was pointed out to us by three friends who told us they had been tracking the whale along the coast for quite some time. They figured that it must be a small whale because its size was just too large for a dolphin.

Nugget Point Lighthouse was an beautiful attraction because of its position at the tip of the cape. The zig-zag and up-down path to the lighthouse and the wild lives in the water at the base of the slope made this scenic walk most enjoyable.

At the lighthouse we walked all the way round it. At its back or would it be called the front, there was a viewing deck. The view was lovely especially as the sky brighten and turned from greyish to bluish. We figured that the name of this place, “Nugget Point” was probably given because of the many nuggets of rock at the end of the cape.

“Nugget” of rocks at the end of the cape and beyond

From Nugget Point to Cannibal Bay was about 18 km and a 30 minutes drive would get us to the bay. From the map, the lighthouse and Cannibal Bay was very near each other, about 4 km apart, but there was no direct road between them. 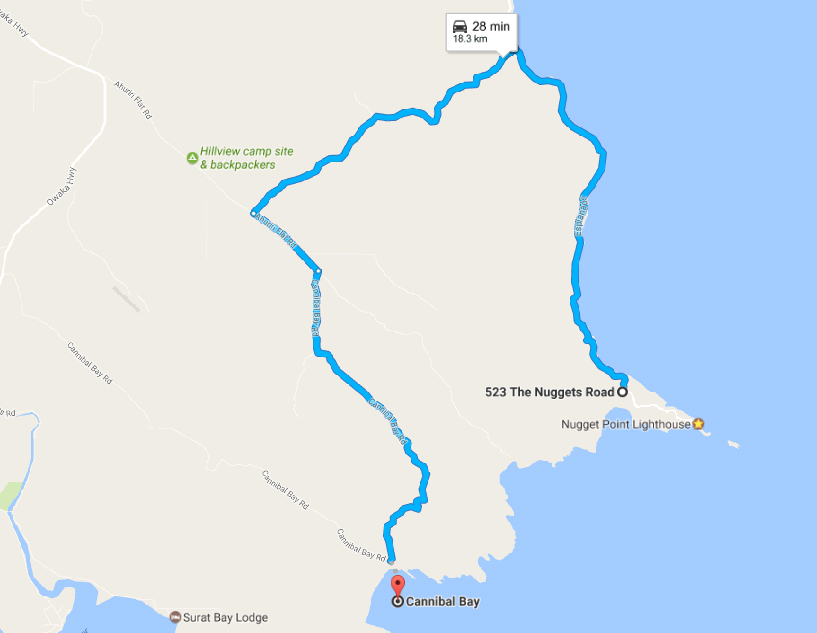 We drove to a carpark just before a path leading to the bay. In the carpark was this huge signboard informing visitors about possible sea lion encounters at the bay and advising visitors to stay at least 10 metres away from these animals. Good we were at the right place, as viewing wild lives was our purpose of this visit. 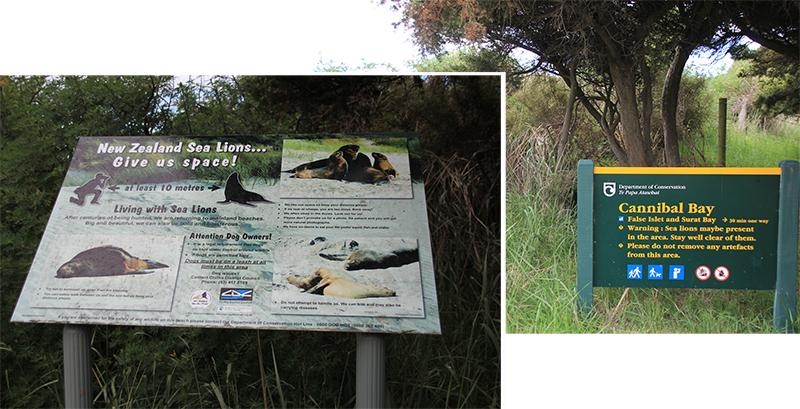 The short path from the carpark led us to a wide open flat beach. We could not see any wild lives on the beach so we figured we just had to walk and find them. On the beach was a couple of huge black smooth boulders which I thought would be a good place to sit. 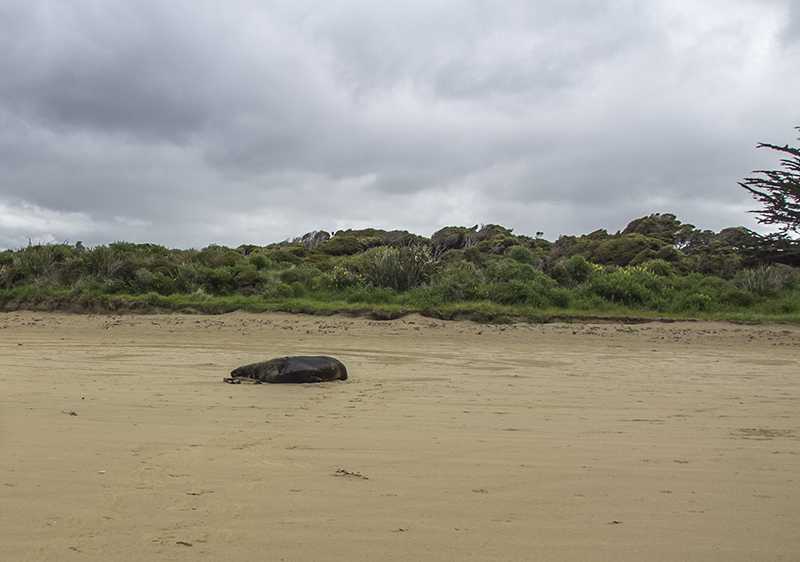 Boulders on the beach?

It was only when we were nearer one huge boulder that we realised it was a sleeping sea lion! Oh mine, this sea lion was so still it was not bothered by all our loud talking as we walked on the beach not knowing that these “boulders” were alive! I presumed these animals were alive because they were definitely not rotting. 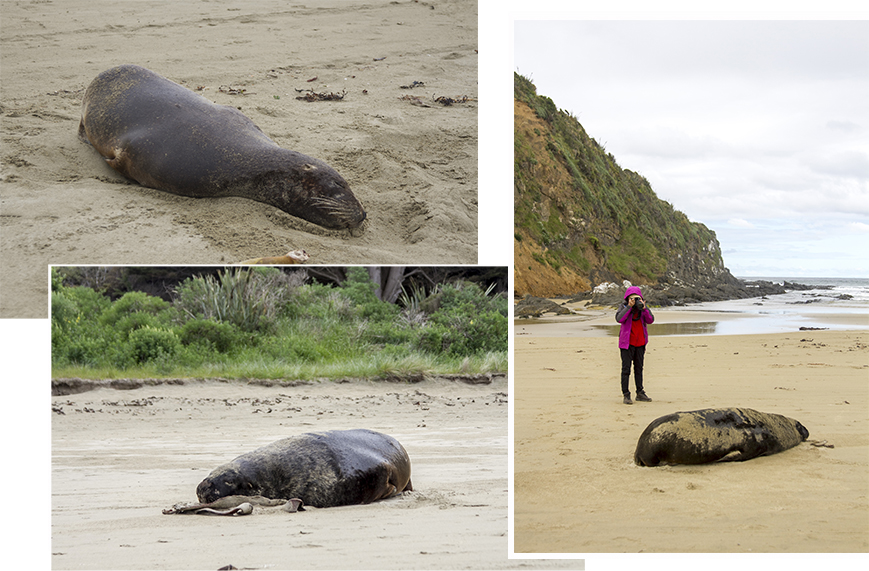 We circled around a sea lion taking many shots and the animal  simply ignored us not even lifting an eyelid. It was amazing to see the sea lion at such close angle, I could see its whiskers! I definitely violated the 10 metres proximity advise!!

One of the main reasons I had planned for a stop at Lake Wanaka was to visit Roy’s Peak. I had seen many photos of Lake Wanaka and its surrounding taken from Roy’s Peak and they were simply breathtaking. I wanted to be up at Roy’s Peak but the walk up to the peak seemed daunting. Not only would it be 16 km return trip it involved some sections of steep slope. Yat Thong and I were fine with walking on flat ground and could go on for hours. As for slope we found ourselves tiring out easily.

Even at this last moment, I was still searching on the internet, reading about others’ experience regarding this walk. I wanted to be sure that it would be something manageable for Yat Thong and not a walk that would tired his legs out for the next few days. This was definitely a “no no” as Yat Thong was the designated driver of our trip. If he was out of action our trip would be delayed!

After considering and reconsidering about our impending trip up Roy’s Peak we decided not to proceed. With Roy’s Peak out of the picture we would have more time to rest and relax at Lake Wanaka.

We had reserved a twin room at  Wanaka Hotel for two nights. The cost was NZD $100 a night and the room came with ensuite toilet. The hotel definitely looked good on its website, it looked spacious and modern so I was a bit disappointed when I entered our twin room as the deco looked dated. 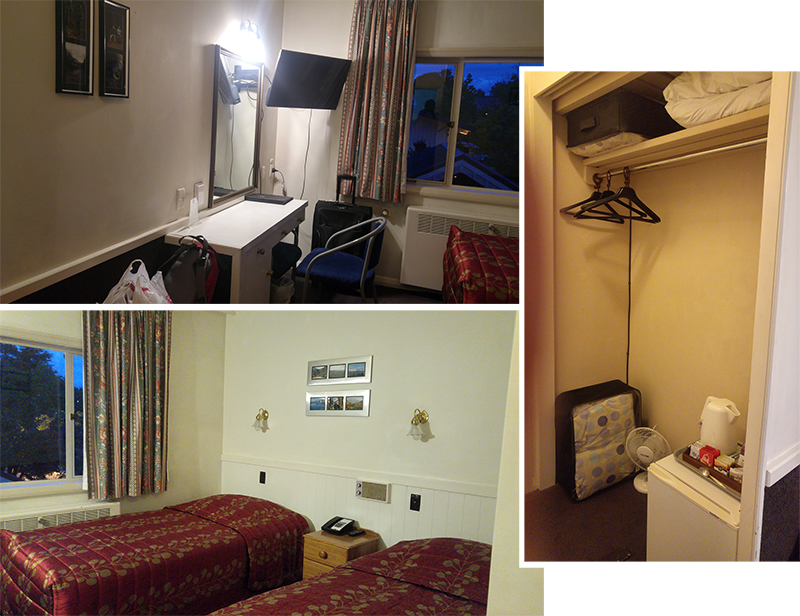 Our twin room at   Wanaka Hotel

Well for NZD $100 a night which was one of the cheapest rates for a hotel room in the vicinity, the room should still be considered value for money, especially when it came with ensuite toilet. The toilet was clean, bright and spacious and after two days of shared toilets at Lazy Dolphin Lodge and Hillview Campsite and Backpacker, it felt luxurious to have our own ensuite toilet! 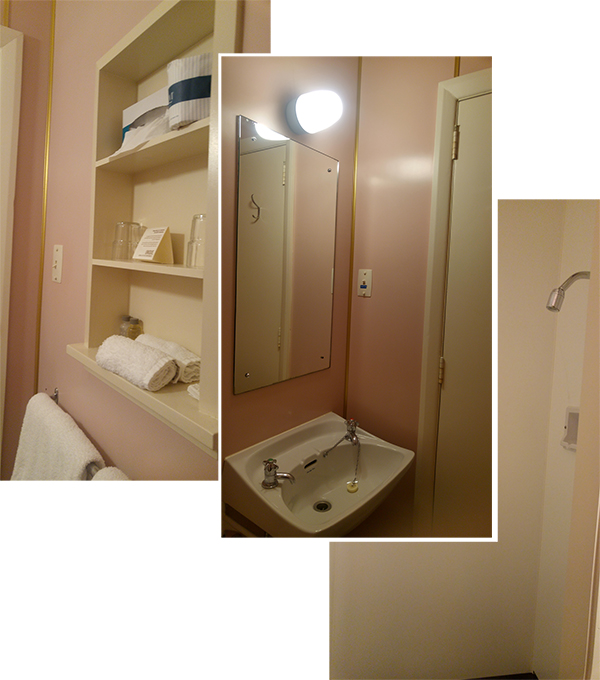 During check-in, the hotel receptionist told us that we could use the guest kitchen for cooking our meal. Wow! the guest kitchen was way better than our expectation. It was equipped with everything and it even provided free seasoning for cooking. The best part was that the huge kitchen was definitely under utilised and I got plenty of room to cook our meal. This was a hotel and not a backpacker place and usually guests at hotel were not into cooking. 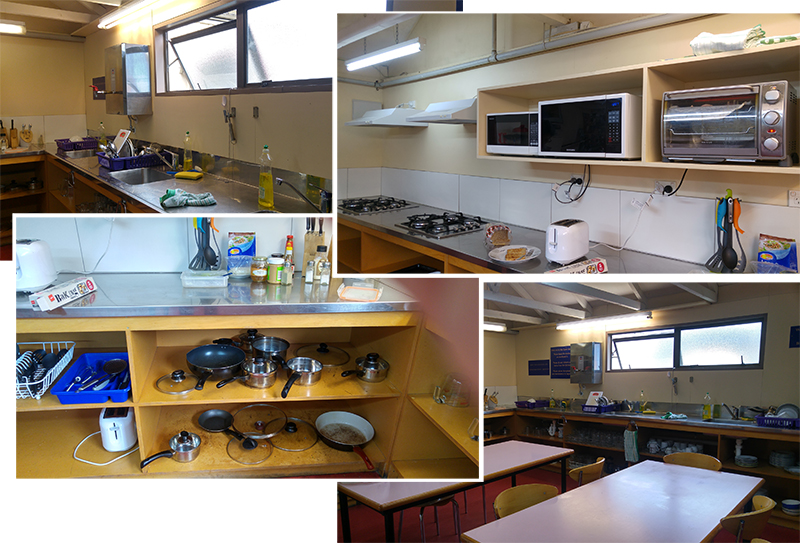 The kitchen even came with a television at one corner. We were able to enjoyed our food and watched a programme at the same time. I decided to definitely make full use of this great kitchen. 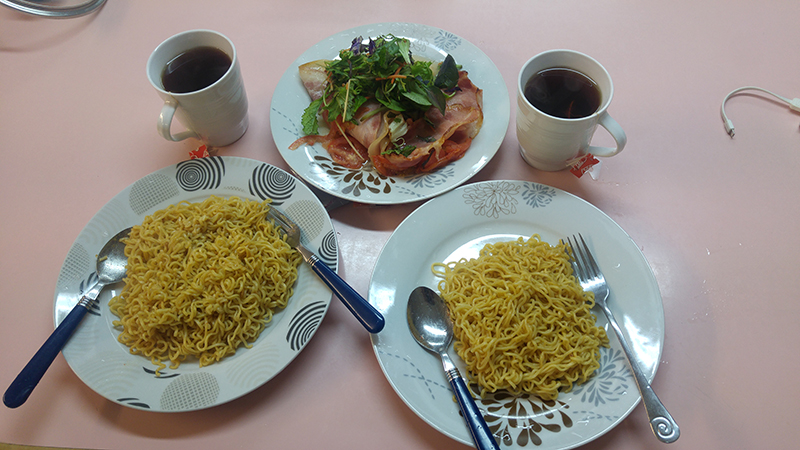 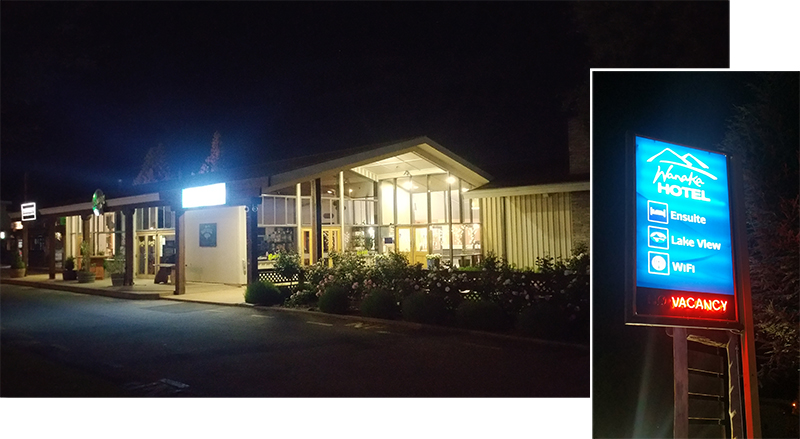 After dinner we went out to have a walk. Our hotel was not too far from the lake so we thought we could walk to the waterfront. On the way to the waterfront we passed many shops, cafes and bars. It was about 11 pm and there were not many people on the road. Some of the bars were still open for business and patrons could be seen inside having a good time. 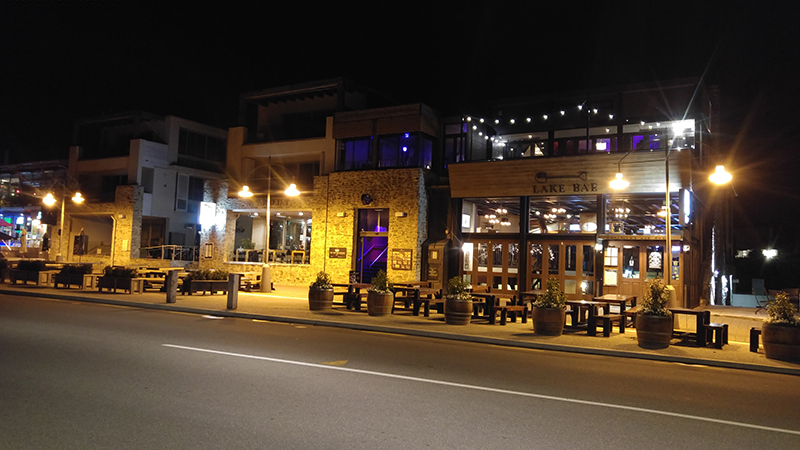