Our plan for the day was to take it easy! Since we had already dropped the trekking trip of 16 km (round trip) to Roy’s Peak, we would have plentiful of time to relax. There were many walking trails around Wanaka so we decided to replace Roy’s Peak with a much shorter walk, a visit to Diamond Lake which was only 19 km from our hotel. 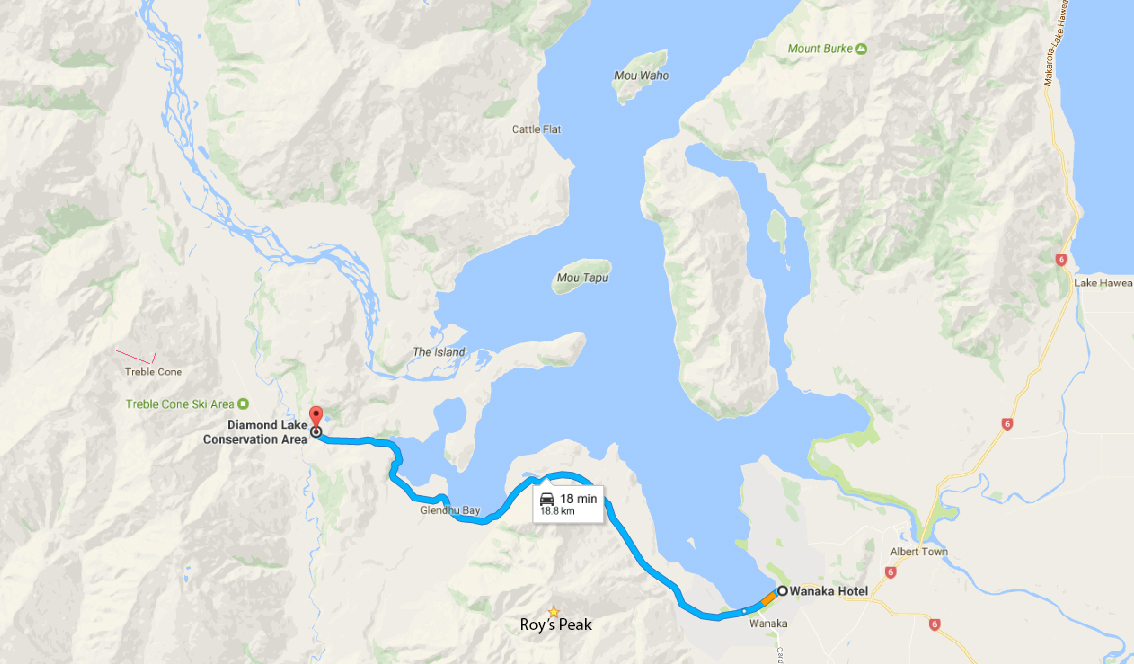 By end of the Day

This morning we made another home cooked breakfast. Since not all the accommodations provided good cooking facilities, I decided whenever we had “good” kitchen we should cooked our own meal. This certainly would save cost and allowed our spare money to be spent on coffee breaks. Sipping cafe latte especially at a scenic location was definitely more enjoyable than just viewing and leaving. 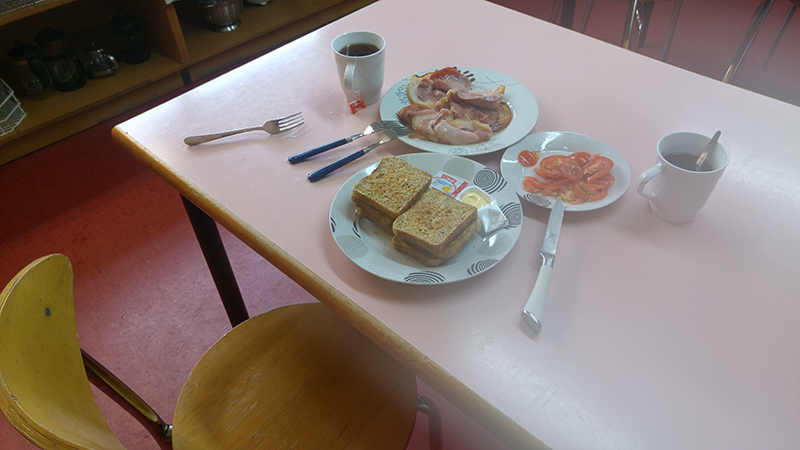 From hotel it was a short walk to Roy’s Bay. Roy’s Bay was located at the southern tip of Lake Wanaka. The greatest advantage of staying at Wanaka Hotel was its location, practically a stone throw from the lake. This meant we could go down to the beach as often as we like.

We were down at the waterfront at 11 am, though it would be noon soon, the sun was just bright and nice, not too sunny at all.  It was a Sunday and many locals brought their children to picnic and play by the lake. 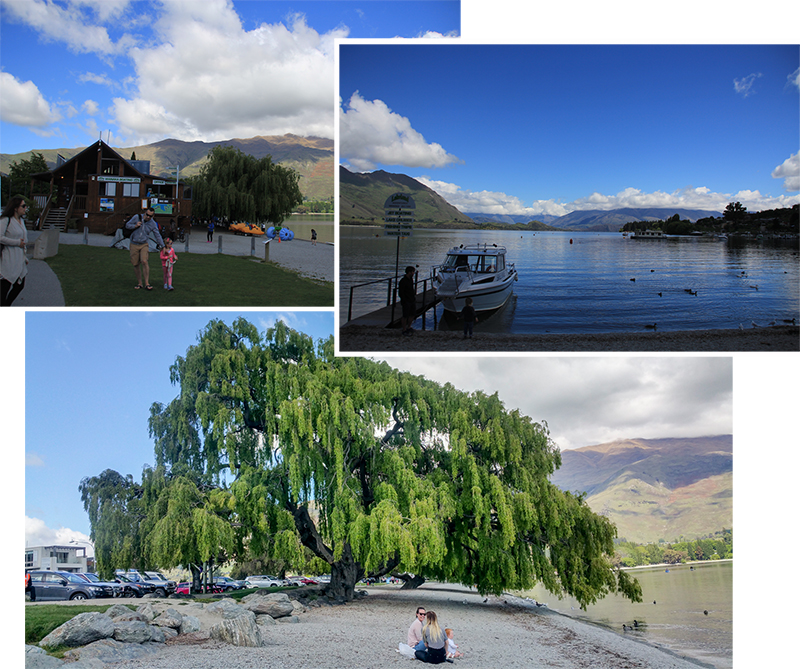 On the lake there were many boating activities, speed boating, paddler boating, stand up paddle boarding etc. Even the birds and ducks were having a good time at the bay. 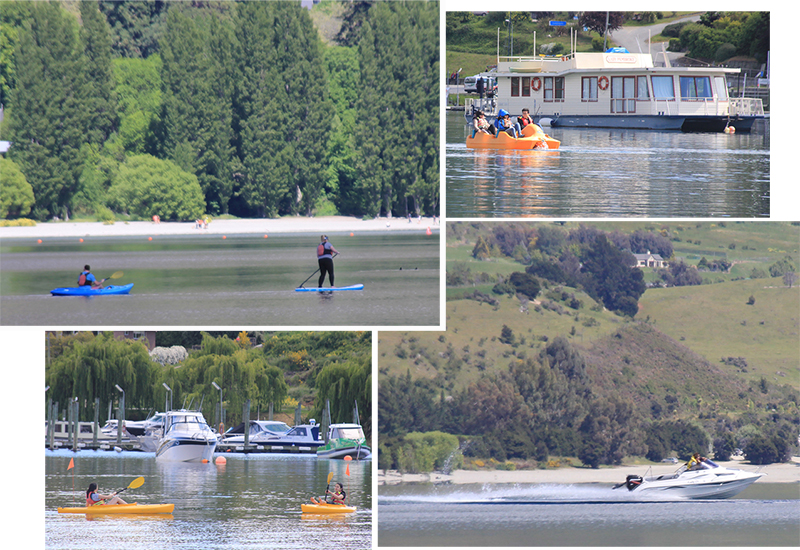 Queenstown, Wanaka, Te Anau were all located near a lake. Of the three I liked Lake Wanaka most because Queenstown was too touristy and Te Anau too quiet. Lake Wanaka had just the right balance. 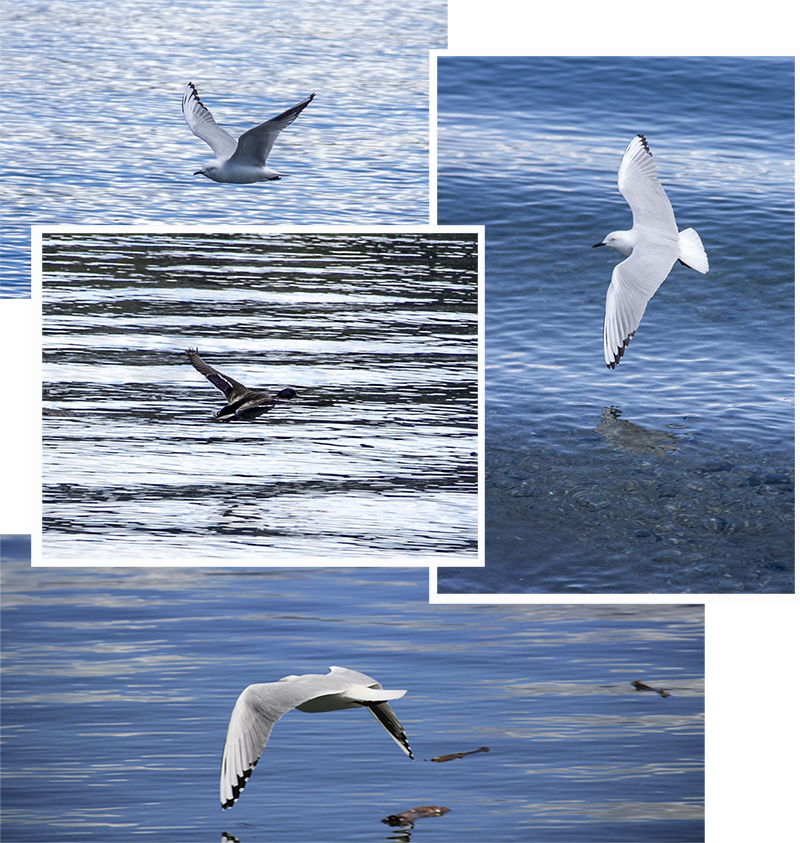 Birds and ducks at Roy’s Bay of Lake Wanaka

At about 1 pm we moved on to Diamond Lake. The drive took us passed the Roy’s Peak carpark which was just along the main road. This was where trekkers would begin their up slope trek for about 8 km to reach Roy’s Peak. Wow! The carpark was packed with cars! The slope inclination at the start of the trek looked steep and this was still the less incline section of the trek. Three hours going up would not be easy for us! 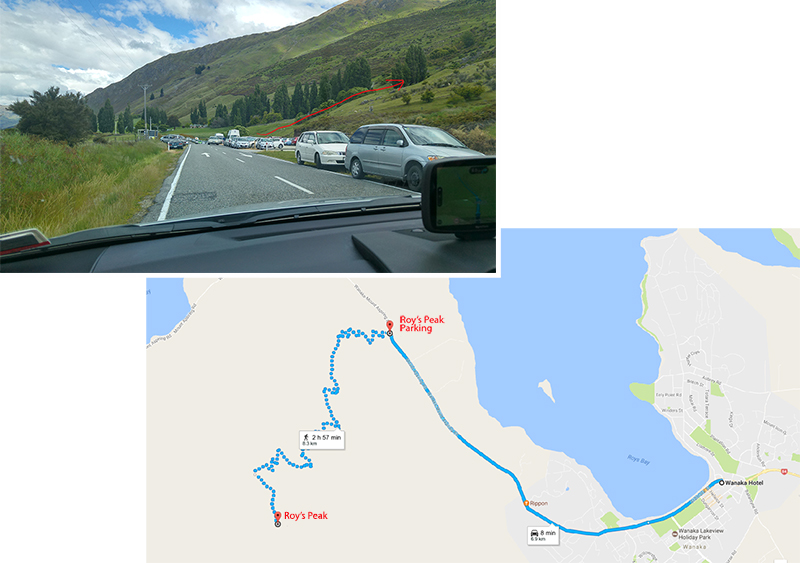 We drove on to Lake Diamond and parked our car at the Diamond Lake Conservation Area. From there we began our walk towards the lake. Our target was to reach a high viewing deck on the opposite side of the lake which would require some up slope walk. 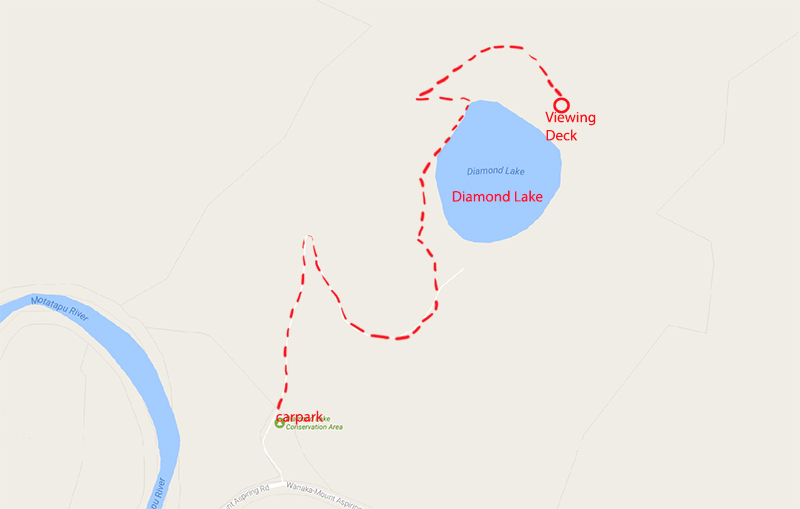 The walk to the lake was relatively easy, just some gentle slope but mostly flat walking. The path led us to walk clockwise around the lake. At certain section of the path we got to view the lake and it was very lovely and tranquil. 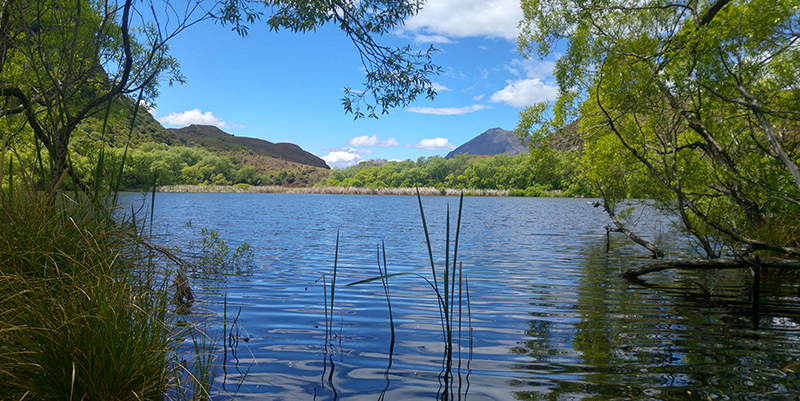 From the ground level the lake looked like any other lake, it looked round. The path took us to a forest section that looked mystical. All the branches of the trees were leaning to one side. The forest provided very good shade and though it was 1.30 pm, the walk was very cooling and pleasant. 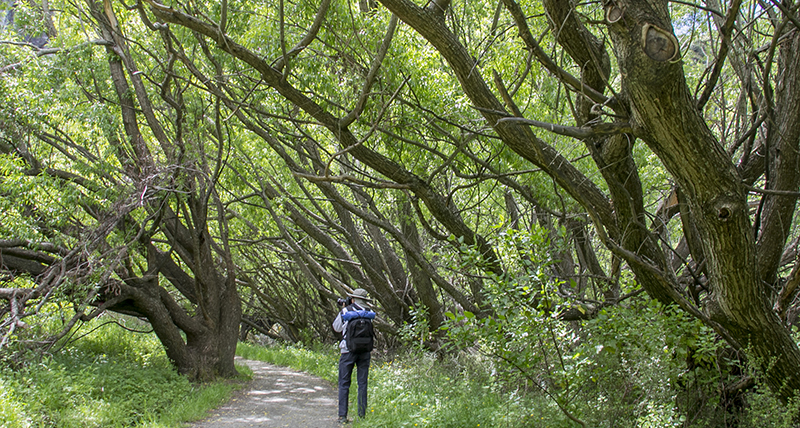 A mystical forest (trek to the viewing deck of Diamond Lake)

Soon the easy walk was over and the path started going uphill. Steps and slope, steps and slope the uphill walk was not easy. Should had expected this as the high view point was pretty high up there somewhere on the hill. Finally after 25 minutes we reached the viewing deck. Wow! On the viewing deck we could see the entire lake. It was not of a diamond shape it was more of a dome shape depending on where I stood on the deck. 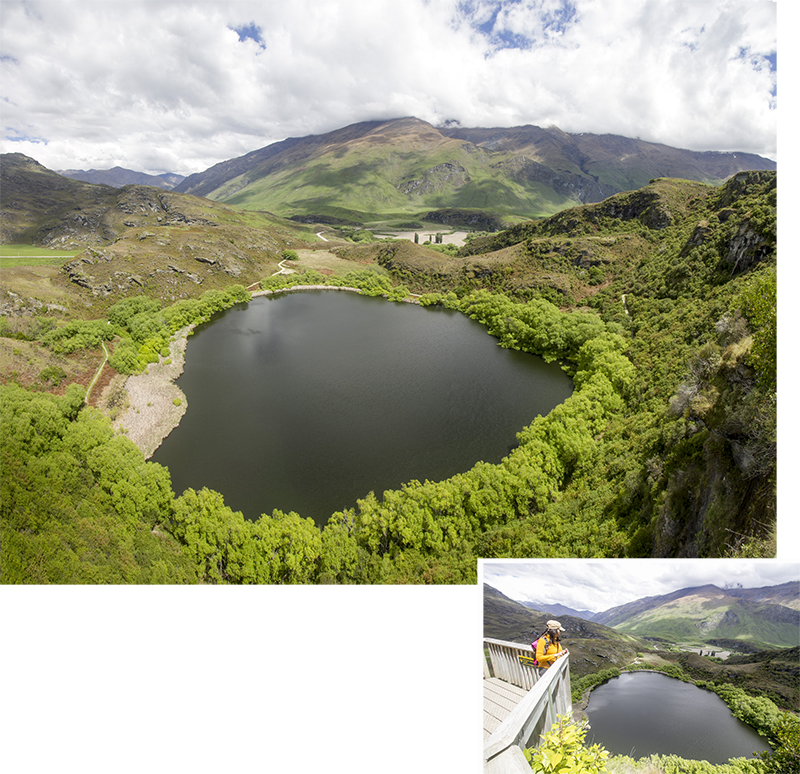 The colour of the lake water looked darkish, it did not have the blue colour that we saw when we were on the ground. On the viewing deck  besides the lake we had a wonderful view of the surrounding mountains and we could even see a couple of para gliders having fun in the air. 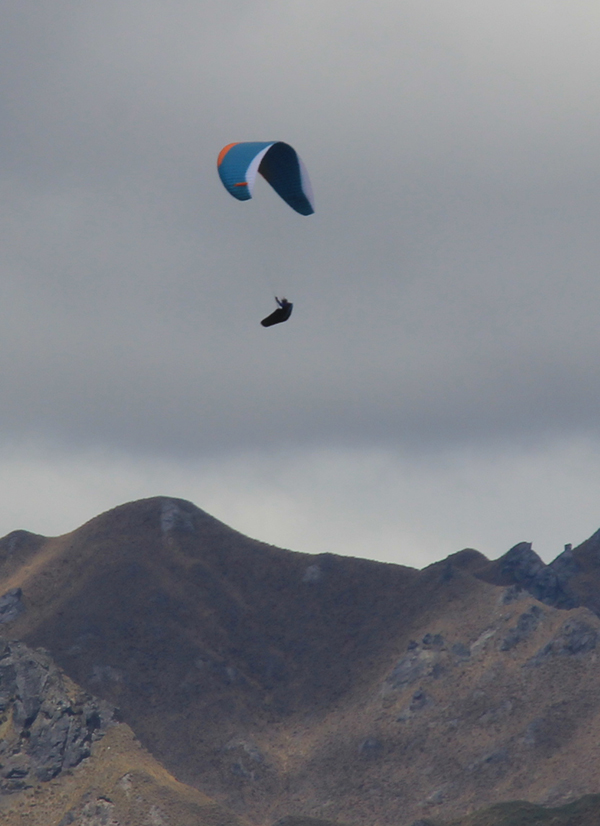 Back to wanaka & Dinner

Wanaka was indeed beautiful, it was surrounded by beautiful snow mountains. We were lucky that today there was no rain, the weather was fine and bright and the snow mountains stood out in the background. 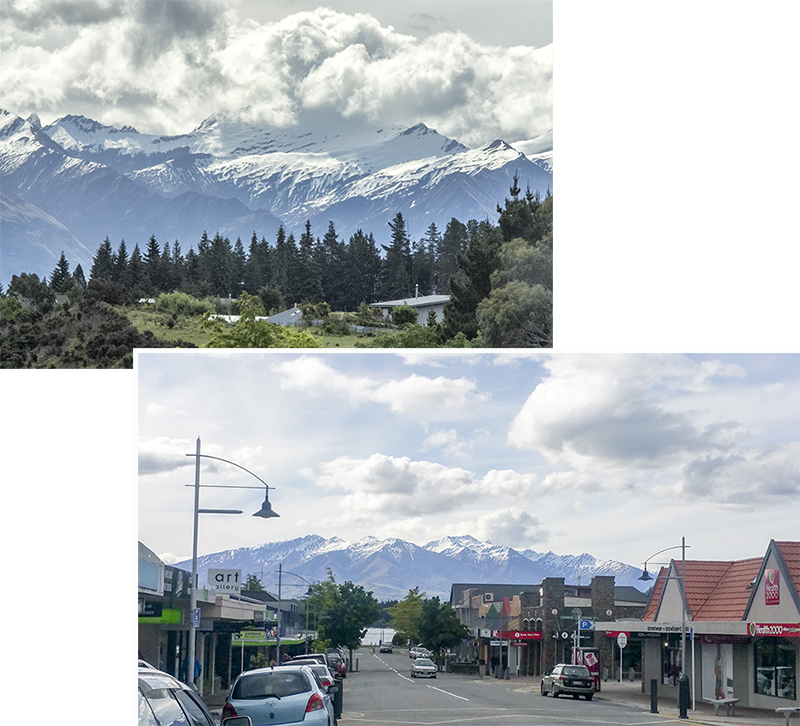 We went into town and visited a super market and bought a coleslaw, garlic bread and grilled chicken. The grilled chicken was sold at NZD $17 which was pretty pricey. But it seemed to be the standard price for a grilled chicken as I had seen the same pricing in several supermarkets.

We had our dinner in the guest kitchen of our hotel. It was delicious and we had a great meal. 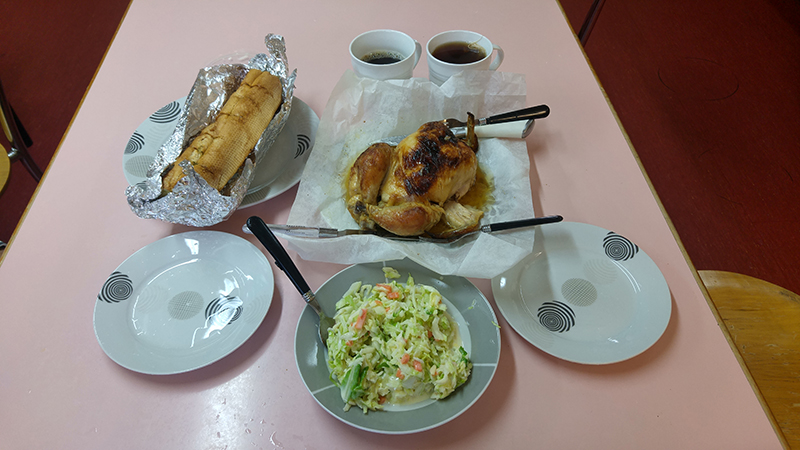 Grilled Chicken, colesaw and garlic bread bought from the supermarket

After dinner we went down to the waterfront again. We were back at Roy’s Bay where we were this morning. Beside us there was only a couple of people at the beach. It was about 8 pm and the sun was just going down. Just for a short moment before the sun disappeared behind a mountain peak, the clouds in the sky turned pink. The sight was stunning and was gone in just a few minutes. It was a good thing that I had my tripod and camera set up to capture the sunset and was able to photograph the pink sunset. 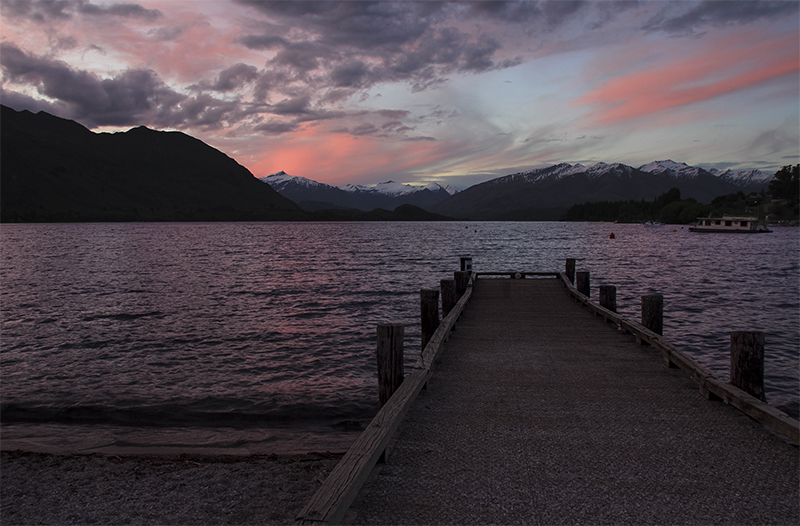 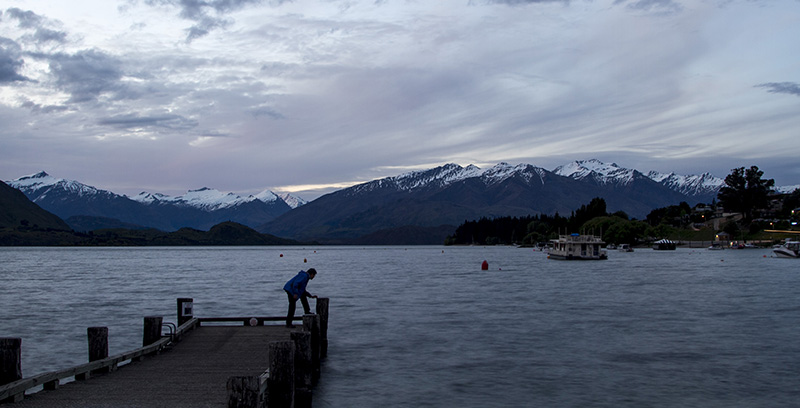 If was just past midnight and I was still not asleep. I was sitting on my bed surfing the net on my handphone. Just as I lie down I had this weird feeling. It felt liked I was in a container and the air around me was moving. The feeling was so subtle that I was not sure if it was my imagination. When I sat up the weird feeling disappeared but appeared again when I lie down. Oh dear, I must be sick.

Yat Thong was at the desk looking at the photos that we had taken from his laptop. He stood up and went to lie on the bed. I was wondering if I should tell him that I did not feel well. He looked at me and I sensed his unease. So I asked him if he had felt that the place moved. His reply was he thought he was sick!

There must be an earthquake somewhere. We went down to the hotel reception to find out more and met the hotel night manager who confirmed that there was an earthquake north of Christchurch at Kaikoura which was about 500 to 600 km from Wanaka. Beside Yat Thong and I there was another guest, a Spanish tour guide, who felt the quake. All the other guests were fast asleep!

The hotel manager advised us to return to our room and keep the TV on to be updated on the earth quake news and hope for the best. I asked the manager if we should leave the hotel and go out to some open space and he said not necessary. I asked him would there be some kind of warning services to wake us up before it was too late and he said no. It earthquake struck near to Wanaka it would be everyone for themselves…run!!!

We spent the rest of the night (or early morning) communicating with our family and friends assuring them that we were not in danger. Singapore was 5 hours behind New Zealand and when the quake occurred they got the news almost immediately too. The power of Internet!

We were all dressed up with all our essential items like passport, money, handphone, chargers, windbreaker and sweater packed in our backpacks, so that if earthquake was to strike we were all ready to grab our backpacks and leave our room. That night we finally fall asleep at 3 am.