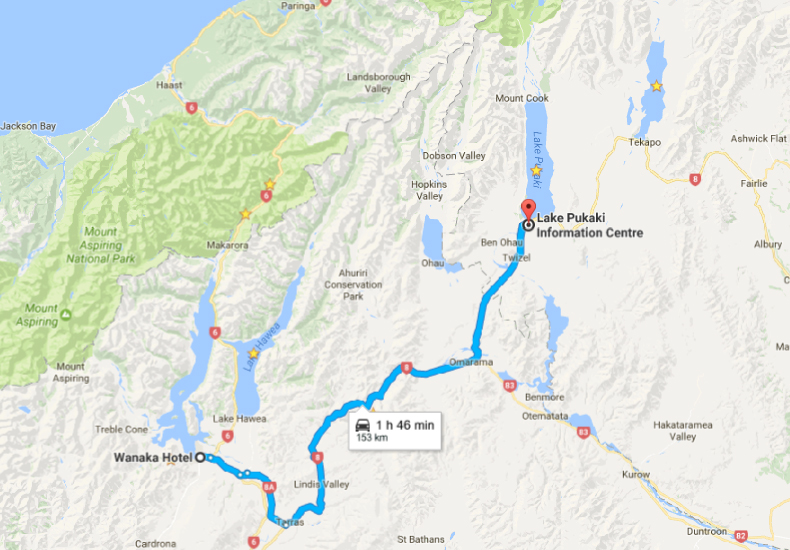 End of the Day

The day before was a full day of clear and fine weather, today our luck ran out. The morning was fine, but by the late afternoon the weather turned gloomy and drizzling. We waited at Lake Pukaki for the rain to stopped but it did not. Since it was late we did not drive up to Mount Cook. At Lake Pukaki we also did not wait to see the sun set as the sun was hidden behind the thick rain clouds. We ended the day at a holiday park near Twizel where we had booked a motel unit.

We made our final meal at the guest kitchen Wanaka Hotel. It was bread with left over chicken meat from dinner the night before. This morning we woke up at about 8 am after very little sleep the night before. In the kitchen as we ate our breakfast we were tracking the earth quake news on the television. There were many after quakes and the locals were advised to move off the coast. We would be travelling northward, our destinations were very much inland and not along any coast so the earth quake would not affect our trip itinerary. 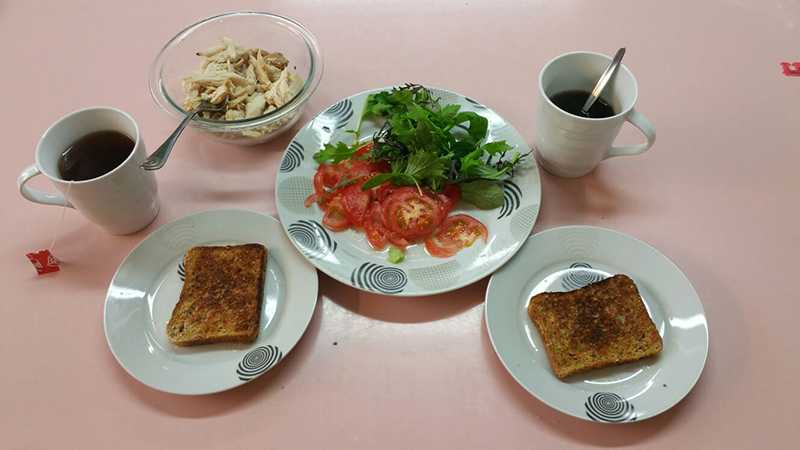 A great viewpoint of the Wanaka Town and Lake

We were not in the hurry to get out of town as we wanted to catch a few more pokemons and fight a couple of pokegyms before moving out. Pokemons and pokegyms were more frequently sighted in town than out of town. It was this quest for pokemons that brought us to Wanaka War Memorial. And there we chanced upon a great view point of the town and lake. 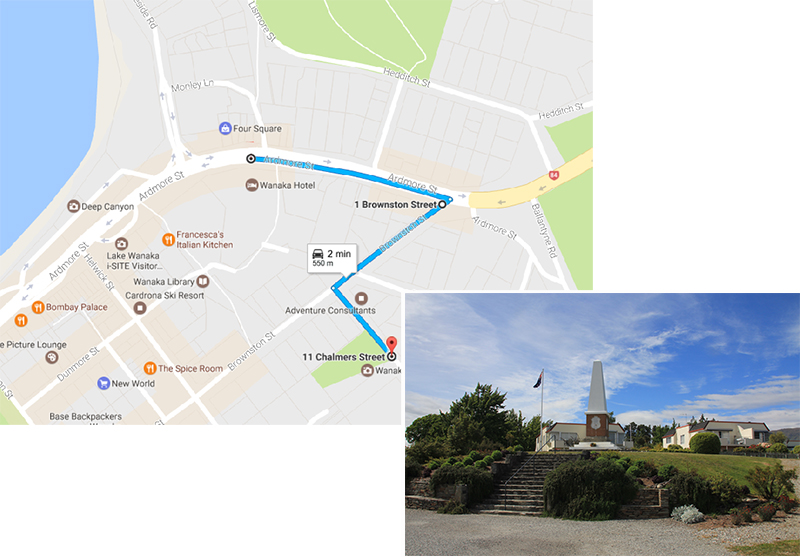 Wow, the view of the town, the lake, mountains, blue sky and white clouds was very beautiful. It was a pity that this viewpoint was not mentioned much by anybody. I wondered how this place would looked like at sunset. I was sure it would be spectacular as the sunset position would be just directly ahead. It was a pity we discovered this place too late.We would be leaving town today and would not be able to view Wanaka Sunset at this high view point. 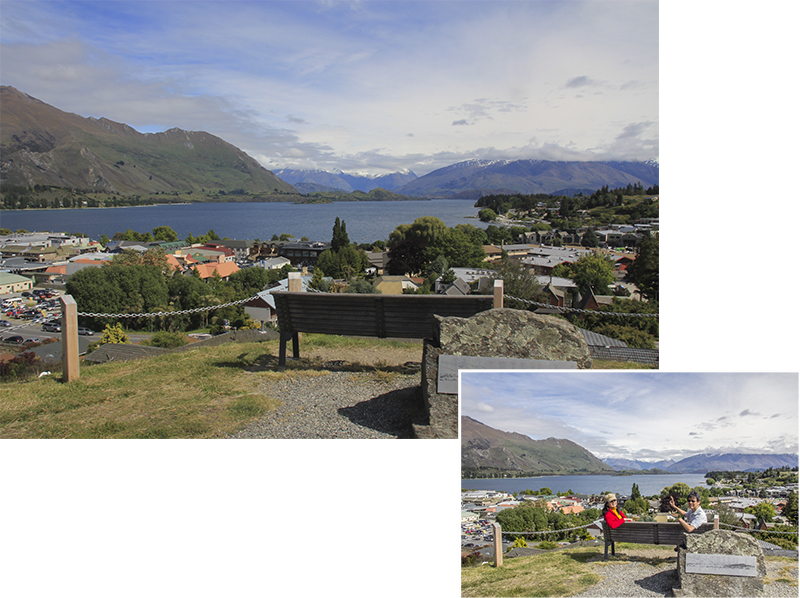 Scenic View of Wanaka town and its Lake

Lindis Pass was a long stretch of road that passed between the saddle of Lindis Valley and Ahuriri Valley. The road was long, endless and windy. All around us was treeless mountains. These mountains were covered by straw colored tussocks. It reminded me of our drive to Queenstown where we also passed through mountains of countless tussocks.

Along the Pass we came upon a view point. After we parked our car at a set-in by the side of the road we took a short walk up a gentle slope to a viewing deck. The wideness of the place was stunning. In our previous trip to the south lsland in Nov/Dec I remembered distinctly that the South Island was beautifully green and not brown/gold. It seemed like all these hill full of brown/gold tussocks would turn green in a month’s time. 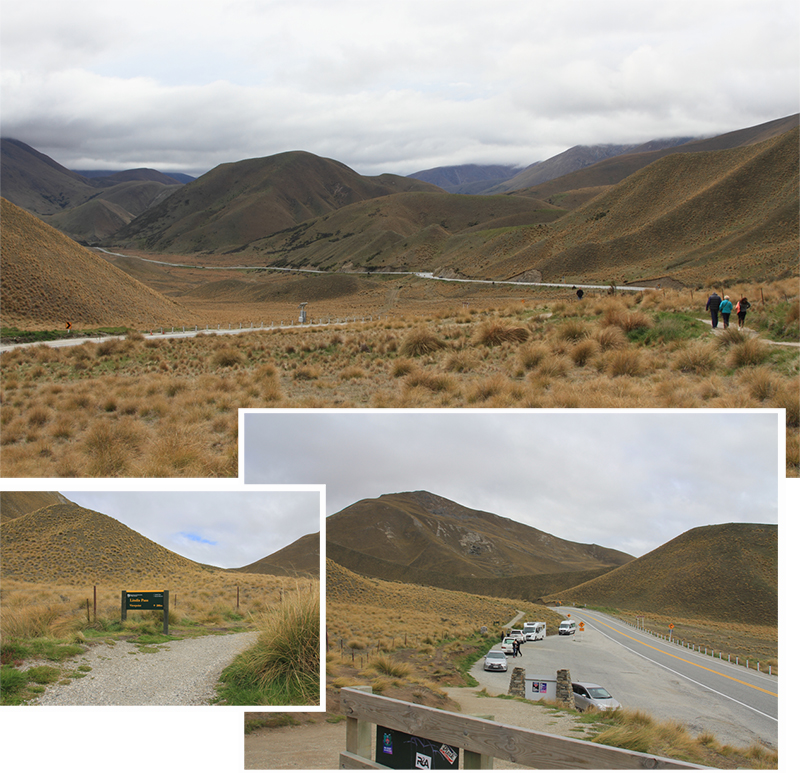 We crossed Lindis Pass and reached Omarama town at about 1.30 pm, we had left Wanaka about 2 and a half hour ago and drove a distance of about 115 km. It was certainly time for a coffee break. We turned into Omarama town and the first cafe that caught our attention was Merino County Cafe and gift shop. 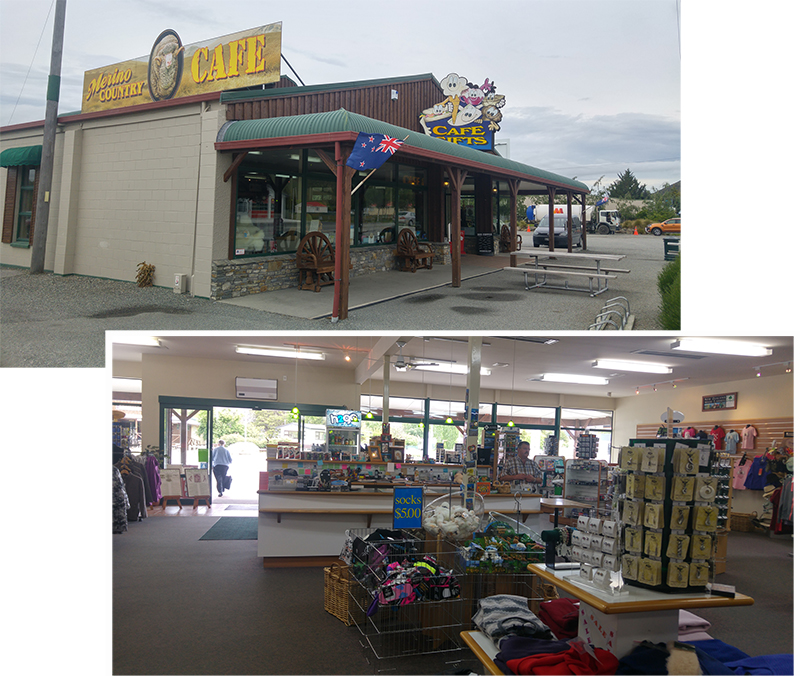 We sat down and bought two cups of cafe latte and a cheese muffin. The bill came up to NZD $14.5. The latte was good but the muffin was so-so. As we rest we also quickly started surfing for the earth quake updates. Kaikoura a tourist town north of Christchurch was cut off from the rest of New Zealand. The only road that led into Kaikoura was blocked by landslide. Many tourists were now stranded in Kaikoura and supplies were running scare.

We thanked our guardian angels for us not being at the wrong place at the wrong time and again for us to be able to continue our trip without disruption. 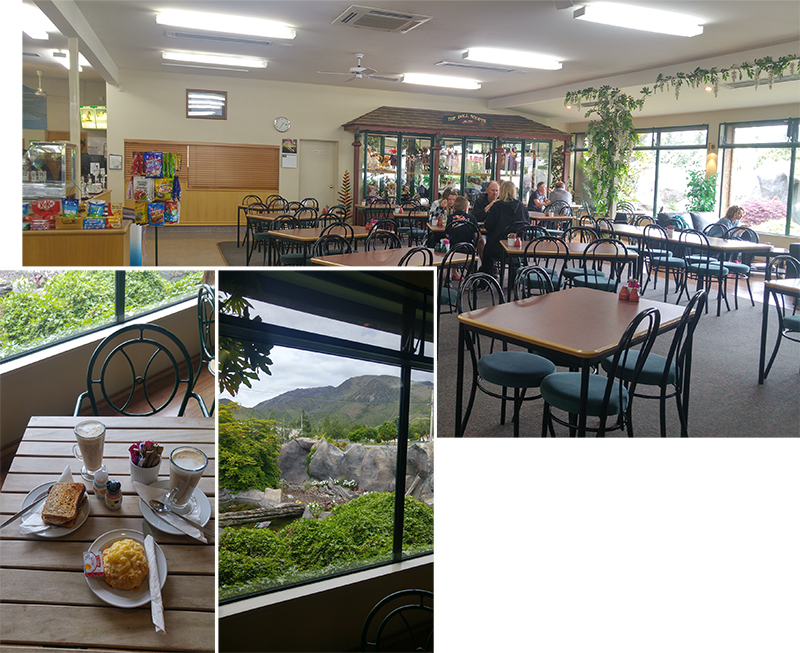 Coffee Break with a View

Ahuriri Bridge Conservation Area was just after Omarama town. It was an impromptu stop. As we drove passed the place, from the corner of my eye I caught a glimpse of a field of beautiful flowers.  We stopped and came down to explore. There was a huge spread of lupin on the bank of the river. 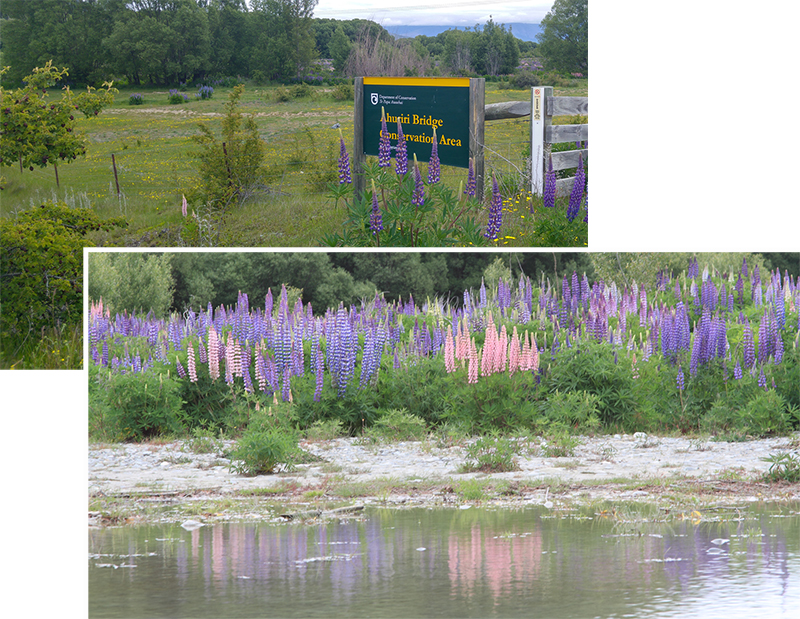 The flowers were beautiful. They came in several shades of pink and blue and violet. Lupin bloomed mainly in the later half of November. So I was not too sure if we would be too early to see the flowers on our trip. I deliberately planned for us to be in this region of the south island nearer to the end of our trip so as to catch these blooms. 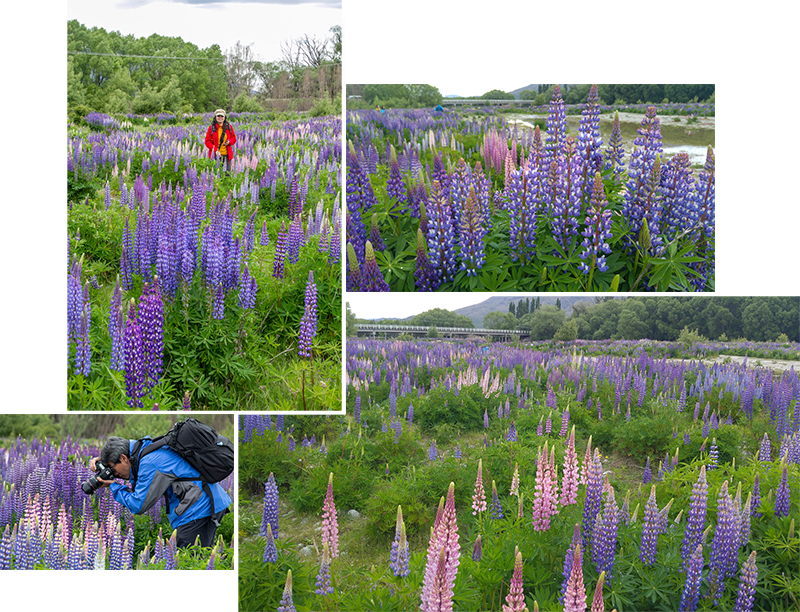 Lupin at the banks of Ahuriri River

Lake Pukaki was so much more beautiful than our expectation. We had been to Lake Pukaki before but it did not make a memorable impact. It was sad that just as we were reaching Lake Pukaki the sky started to drizzle. The sky turned gloomy and it dulled the view of the lake. The entire range of snow mountains that formed the magnificent backdrop of this lake was shielded by low clouds. Nevertheless, the lake was still beautiful, its color was this light baby blue pastel shade. I had never seen lake this color, lake water that looked so opaque blue. 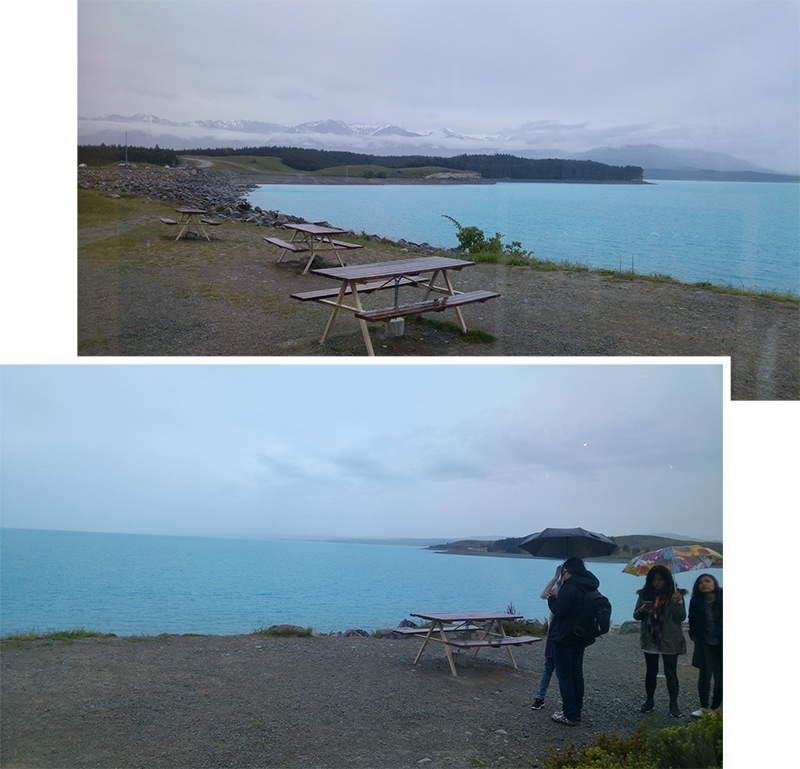 I had seen many photos of Lake Pukaki and I believed the best place to take picture of it was at its southern tip where the Lake Pukaki Visitor Center stood.  This center was actually a salmon shop selling fresh salmon that was locally reared at a nearby salmon farm. 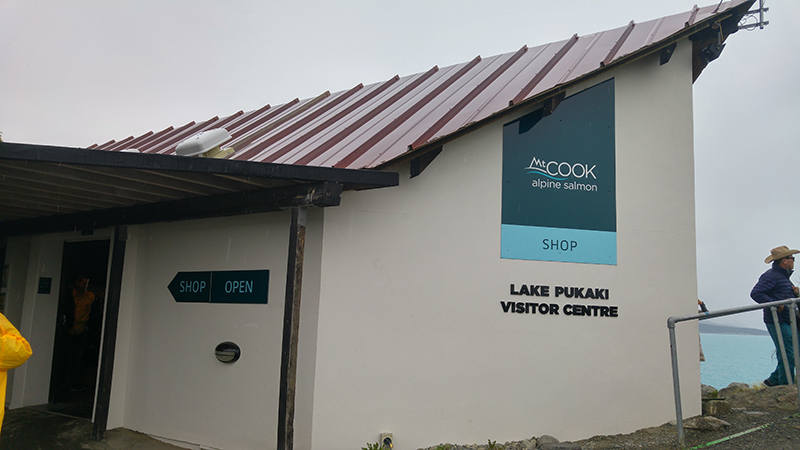 In the shop there was a display of fresh salmon on sale. Since we would be staying nearby we bought a salmon steak at NZD$18 for this evening dinner. I was pretty sure that our next accommodation would have some facility for cooking. Yummy, salmon dinner coming up!

The shop had a whole row of glass panel windows that faced the lake. Since it was raining it was definitely more comfortable to stay in the shop so we bought a cup of cafe latte to share between the two of us and we stood by the window to admire the lake for a long long time. 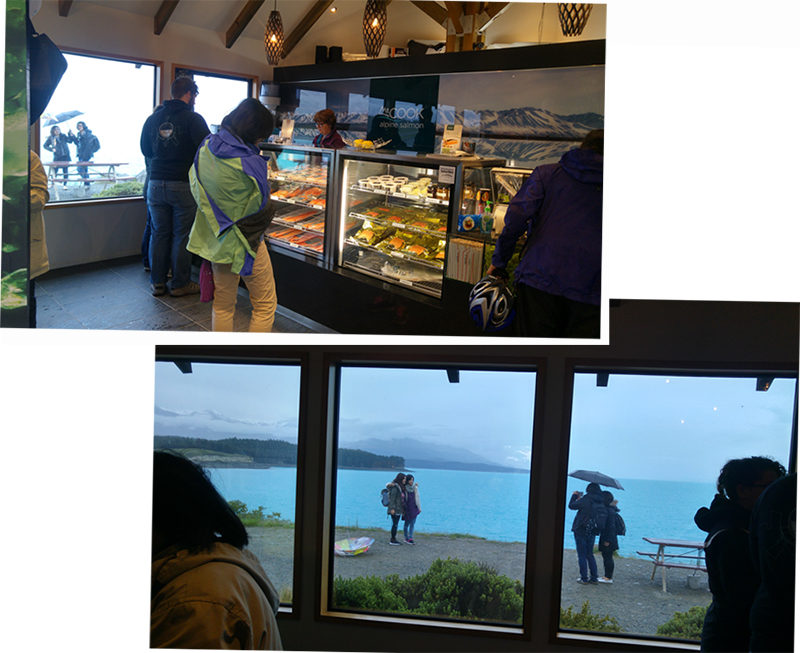 Inside the visitor center which was also a Salmon shop

We original wanted to stay in Twizel town which was about 11km south of Lake Pukaki. Unfortunately I did my hotel booking a bit late so all the reasonably price accommodations were taken. In the end I found this Lake Ruataniwha Holiday Park which offered motel room with ensuite toilet at NZD$130 per night. At this price I could only get a room with shared bathroom facilities in Twizel town, so I opted to stay at Lake Ruataniwha Holiday Park.

After checking in we were directed to a row of motel units just across the reception building. It was still raining so it was very nice that we could park just practically by the door of our unit. This made transferring of bags and stuffs from the car to the motel unit very convenient. 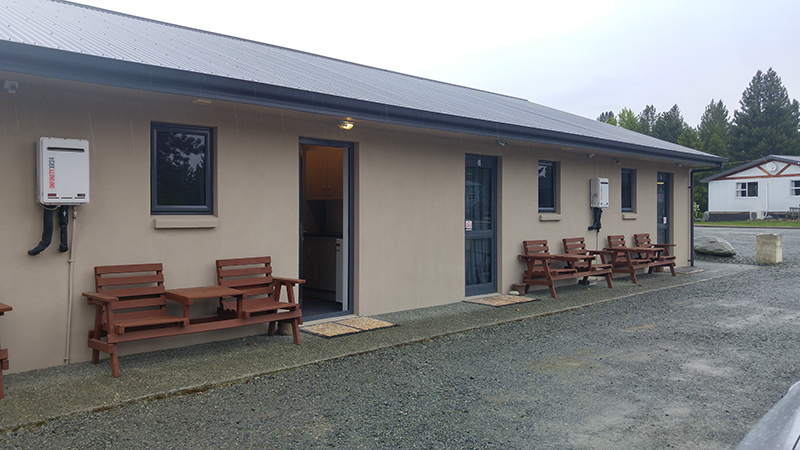 The modest looking motel unit as seen from the outside was so much better than our expectation once we stepped into the door. There was one super king size bed and a single bed. A little cooking area with microwave, kettle and crockery and utensils. The room was bright, clean and spacious. It was the biggest room we had so far during this trip. 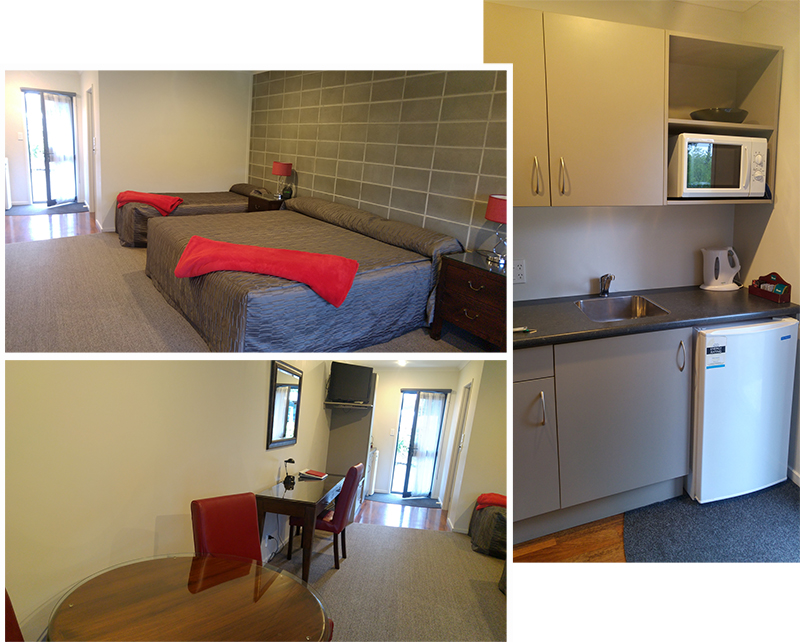 The bathroom was fabulous! It had a jacuzzi bathtub! Wow! We loved this place. It was such a shame that all these niceties were not shown on the website when we did our online booking. We would had book this place without a second thought despite that it was about 4.7 km away from Tiwzel. 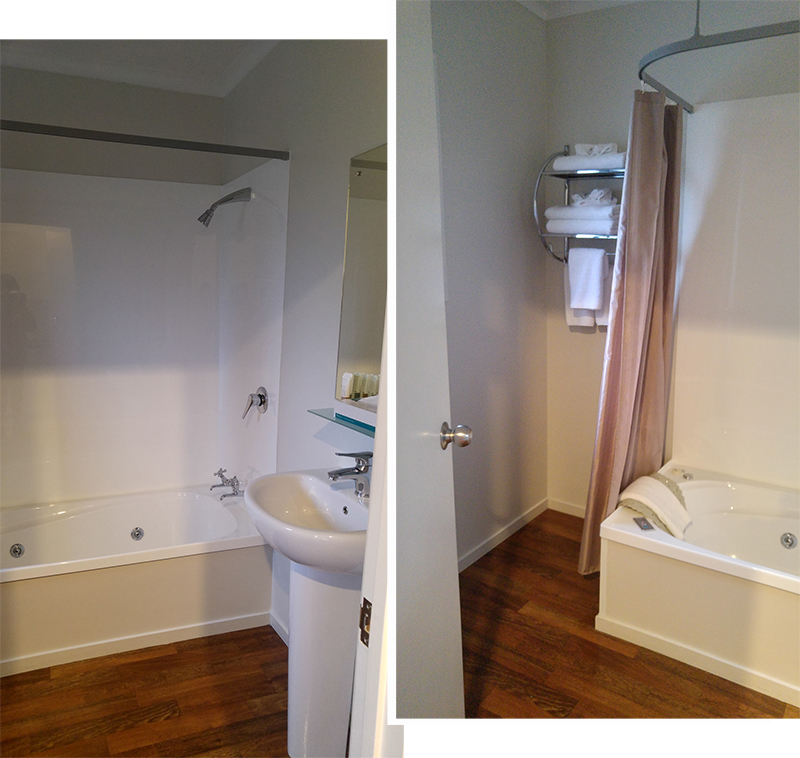 Our Bathroom in our Motel Unit at Lake Ruataniwha Holiday Park

We wanted to stay very near Lake Pukaki because we wanted to visit the lake several times before we left the place for good. From our experience, to plan only one time slot to visit a beautiful scenic site could end up in disappointment because the weather might not be good during that only time slot. So in most of our planning we would build in the flexibility to return to the same scenic site again. That was the reason we tried to stay in hotels located as near the scenic sites as possible.

I was fixated with seeking out an accommodation in Tiwzel which was the nearest town to Lake Pukaki with hotels/motels at affordable rates. I was very reluctance with Lake Ruataniwha Holiday Park as compared to Tiwzel town it was another 5 km away from Lake Pukaki. I was glad this last resort turned up so well.