Our final destination for the day was Rovinj, a beautiful fishing port. It would be a three hours journey from Senj. Along the way we planned for two stops, the first at Trsat Castle of Rijeka and the second at the colosseum of Pula.  We expected to reach Rovinj in the late afternoon and still had time to roam the town. 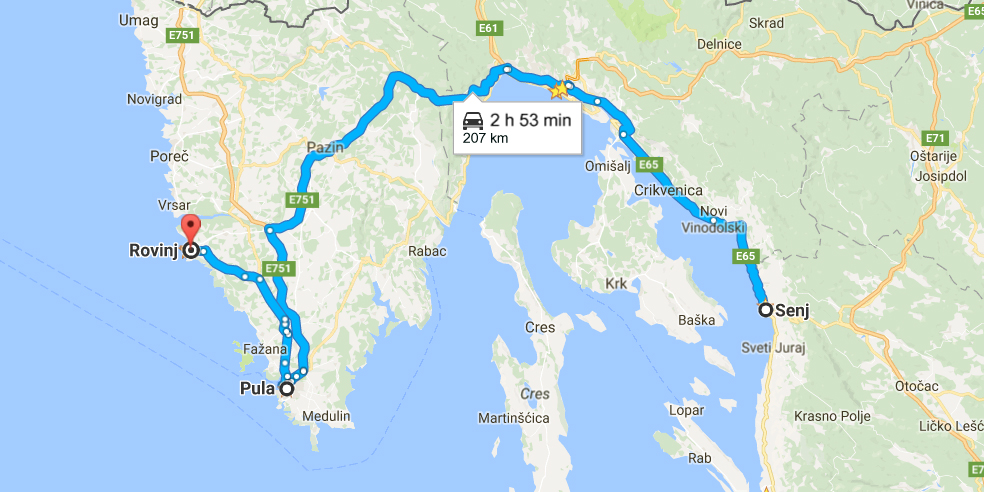 By the End of the Day

We visited Trsat Castle and had a lovely coffee break in the castle. At Pula Colosseum we had an ice-cream break. We reached Rovinj at about 5.30 pm and had a wonderful sunset dinner.

We made full use of the kitchen and had our second home cooked meal for this trip. Home cooked meals definitely save time and money. 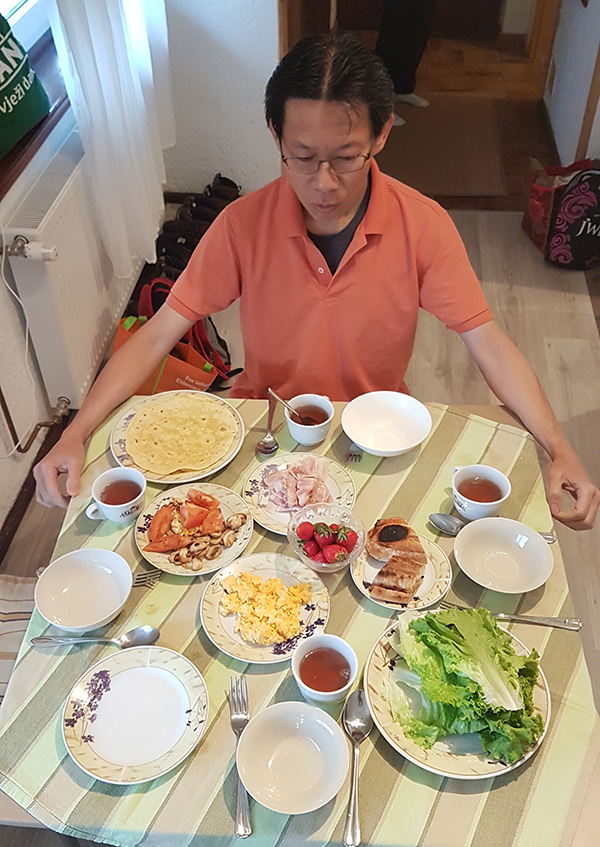 A combination of home cooked meals and restaurant meals would be lighter on the pocket. Home cooked did not have to mean skimpy meal. With practice I was able to serve “great” meal with minimal effort.

We left our apartment at about 9 am. The sky was still gloomy and the air felt wet, it looked like the rain had continued through the night and would persist through the day.

From our apartment we could see the Adriatic sea, it was huge. On a clear day we should be able to see the islands over the sea horizon but due to the low mist and poor weather this morning the horizon looked blurry and empty. 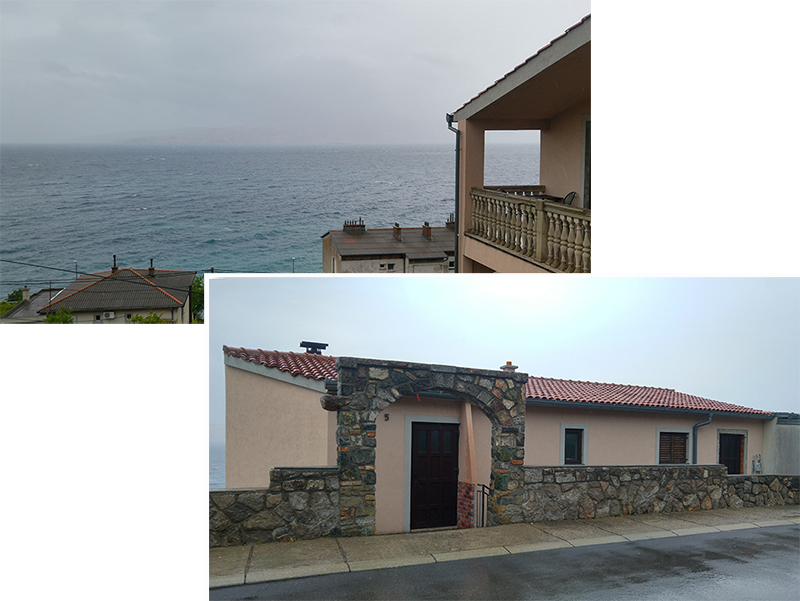 Our accommodation at Senj 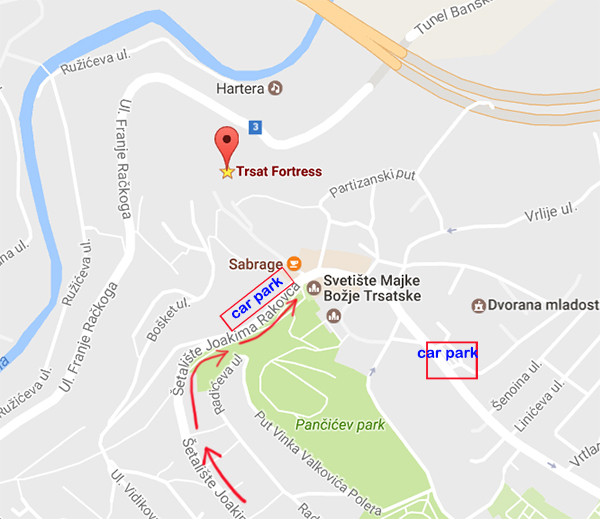 From the map I could see a small road leading up to the castle. Coming from the main road we passed a carpark just before Cafe Sabrage, though there was an empty lot we did not stop to park as it seemed to be still some distance from Trsat Fortress. After the cafe we turned left onto a small road and almost immediately came to a fork. One branch of the fork led to the small road leading to the Trsat Castle but it was barricaded!! All the roads were one way so we were forced to move forward taking the other branch that led into a housing estate. The roads in the estate were narrow and difficult to negotiate and there was no way to park our car by the road side. We had no choice but to return to the main road and made a big loop to get back to the car park just before Cafe Sabrage. Unfortunately this time there was no empty lot. We waited for 20 minutes but gave up after a while and moved on to explore the smaller roads on the right side of the main road but again without any success in finding a space to park our car. We looped back to Cafe Sabrage again. It was depressing to be so near the castle and yet not to be able to explore it. This time we drove past the cafe and continued down the main road. Though the main road was wider it had a row of barricades along one side of the road to prevent visitors from  parking. We drove further and away from the castle until about 500 m from Cafe Sabrage we found a car park with empty lots! 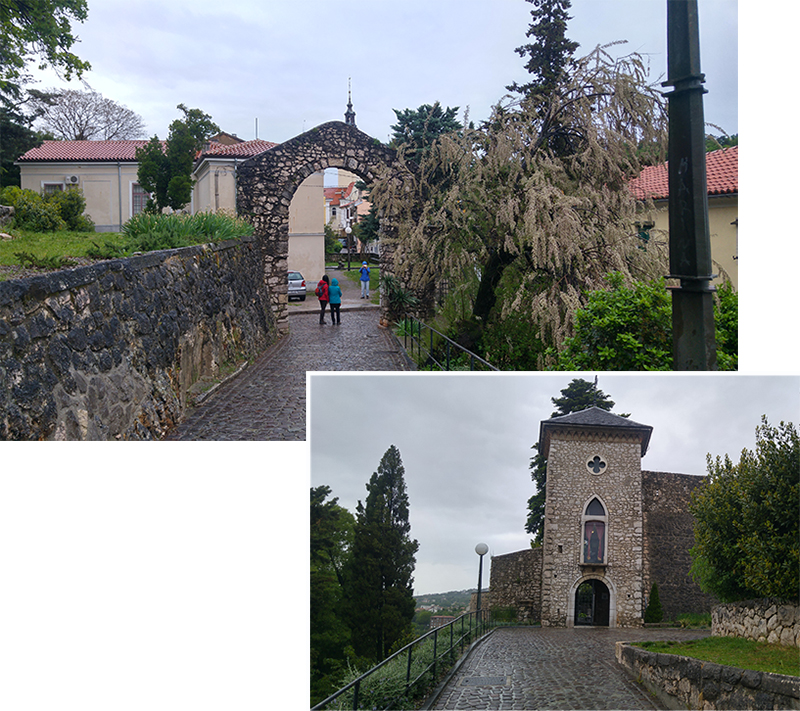 Entrance into the Castle ground

Trsat Castle was a thirteenth century castle situated on the steep hill overlooking the town of Rijeka and the sea along the Rjecina River. It was completely reconstructed and renovated in the 19th century when the mausoleum of the military commander Laval Nugent was built in its interior. The castle was very lovely and well maintained. Probably because of the drizzle the stone buildings and walls had a “polished” look. 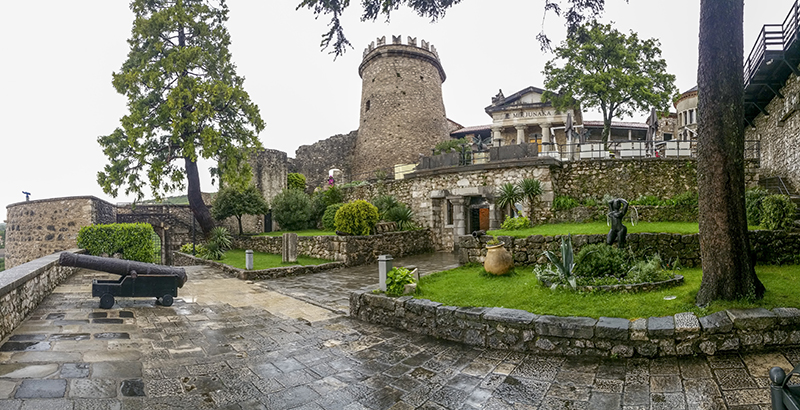 We were most fascinated by the two flying creatures statues that stood guarding the entrance of the mausoleum. They had the heads of a angry cockerel, dracula wings, devil tails and sharp falcon claws. Overall put together these fly creatures looked majestic, evil and powerful. Probably these were the legendary griffins? 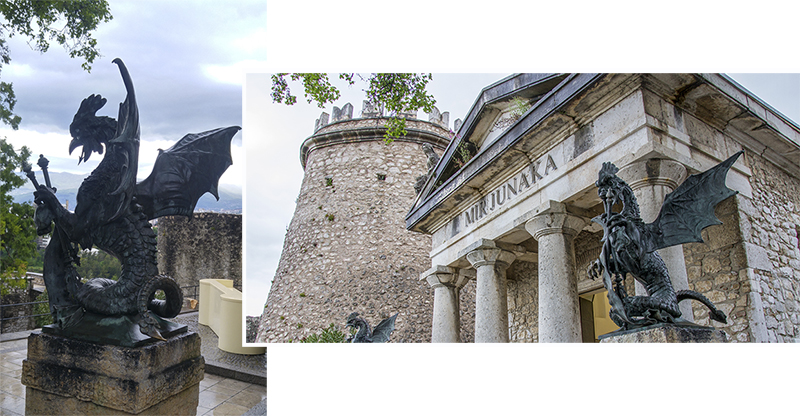 After 20 minutes of exploring the castle we were done but felt very reluctant to leave considering that we had spent so much time getting to this castle. We decided to patronise Cafe Vintage that was housed in parts of the castle. This cafe had outdoor and indoor seating. Thought the outdoor seats had a panoramic view of the old town and harbour, they were dripping wet with rain water so we had to go indoor. 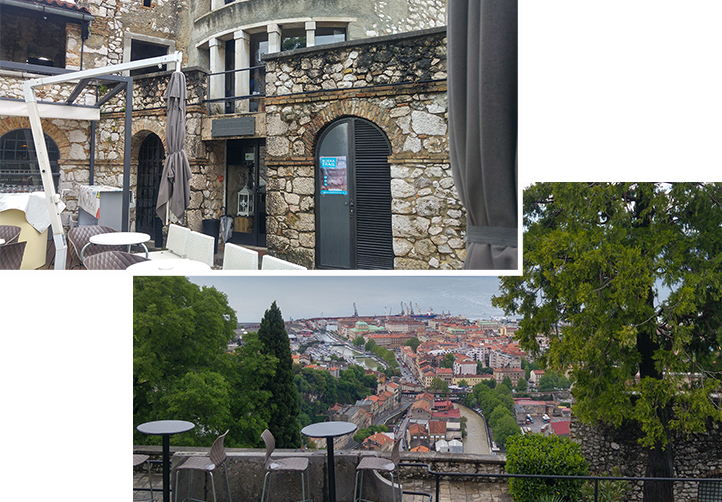 What a surprise! Vintage cafe was absolutely lovely inside. It was very well furnished, comfortable and classy. There was a circular staircase that went up one level to a bar. There was third level too. We chose the 2nd level and sat by the windows overlooking the castle compound and the town/port below the hill. It was a cold and rainy day which was definitely a good time to order three hot cafe lattes and one hot chocolate. 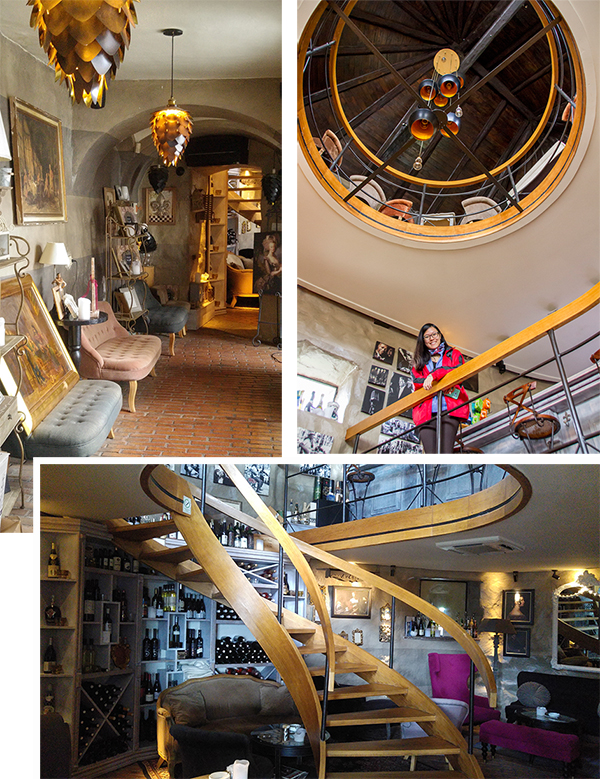 It was a bonus that in such a posh setup the cafe latte costed only 10 kuna (SGD$2 or €1.35) each. We snuggled comfortably in thick padded sofa armchairs, sipping hot coffee slowly as we take in the beautiful view of the castle compound, the sky, the city and the port outside the windows. 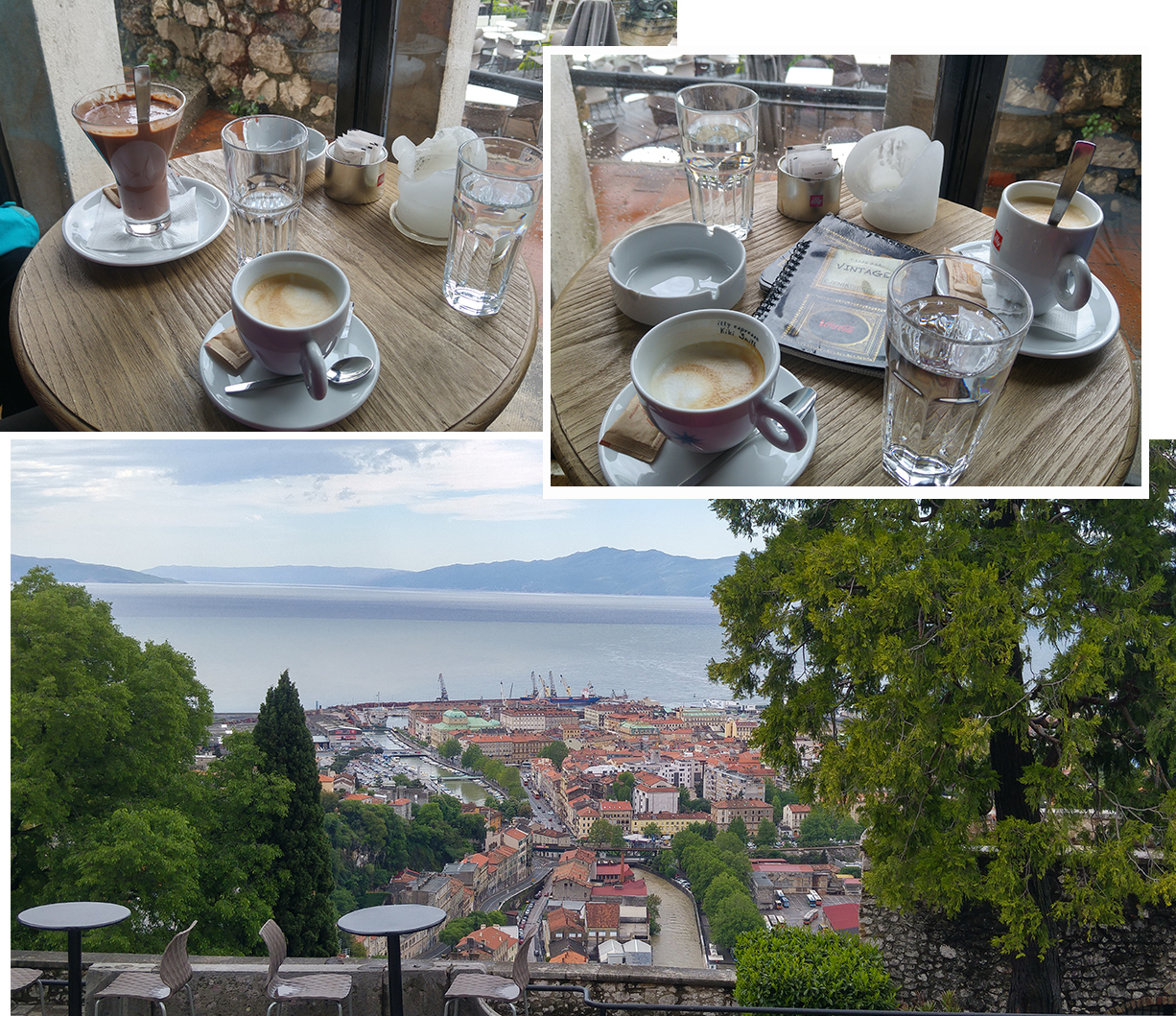 Coffee with a view

The journey from Trsat Castle to Pula was about 116 km taking about 1.5 hour. By the time we reached Pula it was about 2 pm. This 116 km brought us out the rain! At Pula the sky was brilliantly blue. 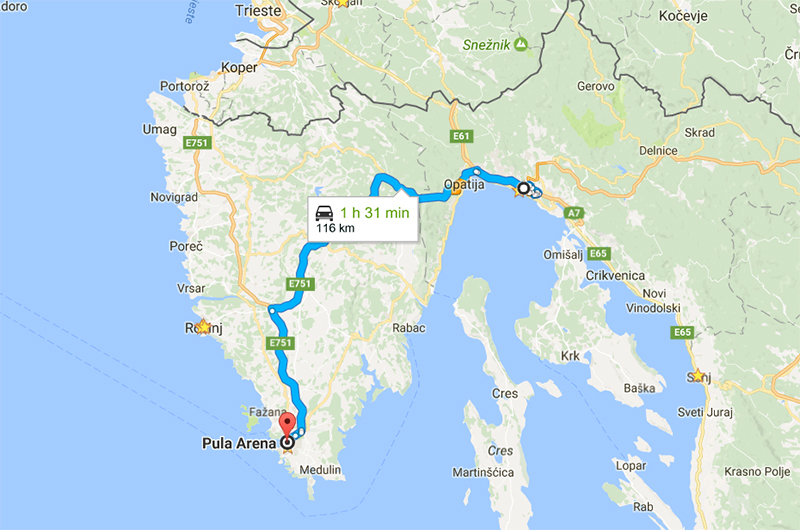 Pula was located at the tip of Croatia Istrian Peninsula. The Istrian peninsula was conquered by the Romans in 177 BC  starting a period of Romanization.  Today, in Pula, its most famous attraction was the arena (colosseum). It was one of the many evidences of Roman occupation in Pula. 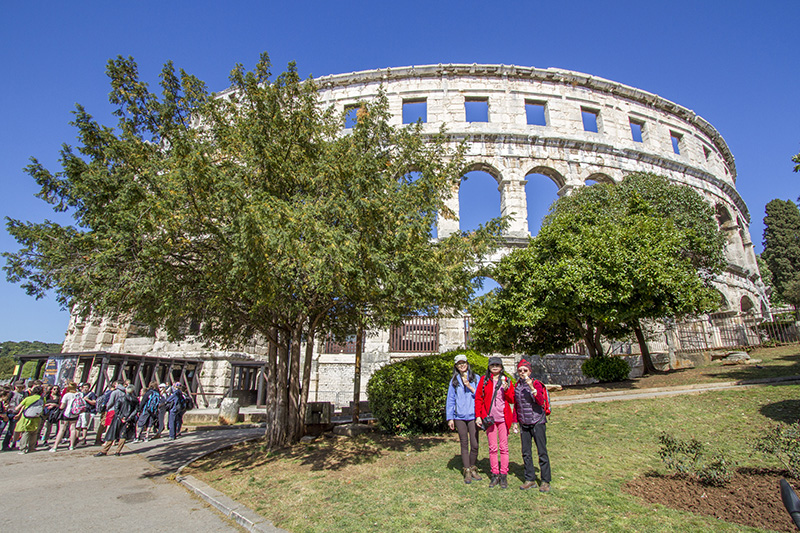 This arena of Pula was the sixth largest surviving Roman amphitheatres in the World and the only Roman amphitheatre to have four sides towers entirely preserved till today. We took a slow stroll along the circumference of the arena and marveled at the beauty of this ancient structure. In its grand old days, this arena could seat over 26,000 spectators gathered here to watch the combats between gladiators. 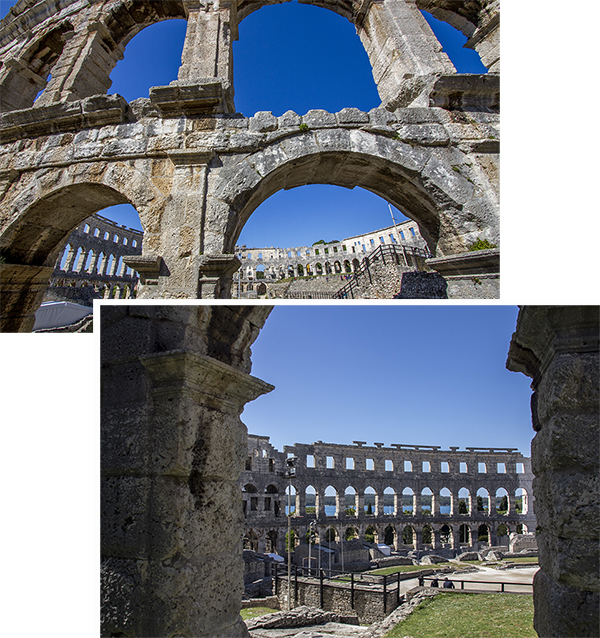 It took us about 45 minutes to drive from Pula to Rovinj over a distance of 40 km. At Rovinj we had booked an apartment in the old town. This old town was off limit to cars. Luckily there was a public carpark (co-ords: 45.084907, 13.635385) nearby where we could park our car overnight for €10. From there we would have to go on foot into the old town. 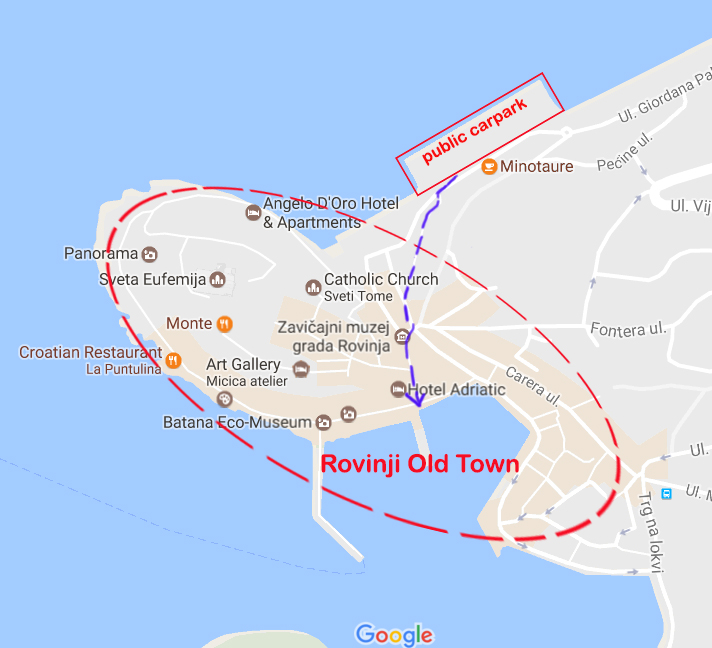 After we parked our car, each of us took out our overnight bag but left our luggage in the car boot.

The walk to the port front of the old town from the public car park was about 350 m. Along the way we walked past rows of houses, many souvenir shops, restaurants and cafes. A very lovely town.

We waited in front of Adriatic Hotel for Diana the owner of our apartment “Holiday Home Rovinj Savicenti” to arrive. We were supposed to meet at 5.30 pm, we arrived 10 minutes early and she was about 10 minutes late. We did not mind the wait as the port front was quite “happening” with tourists and locals moving around. 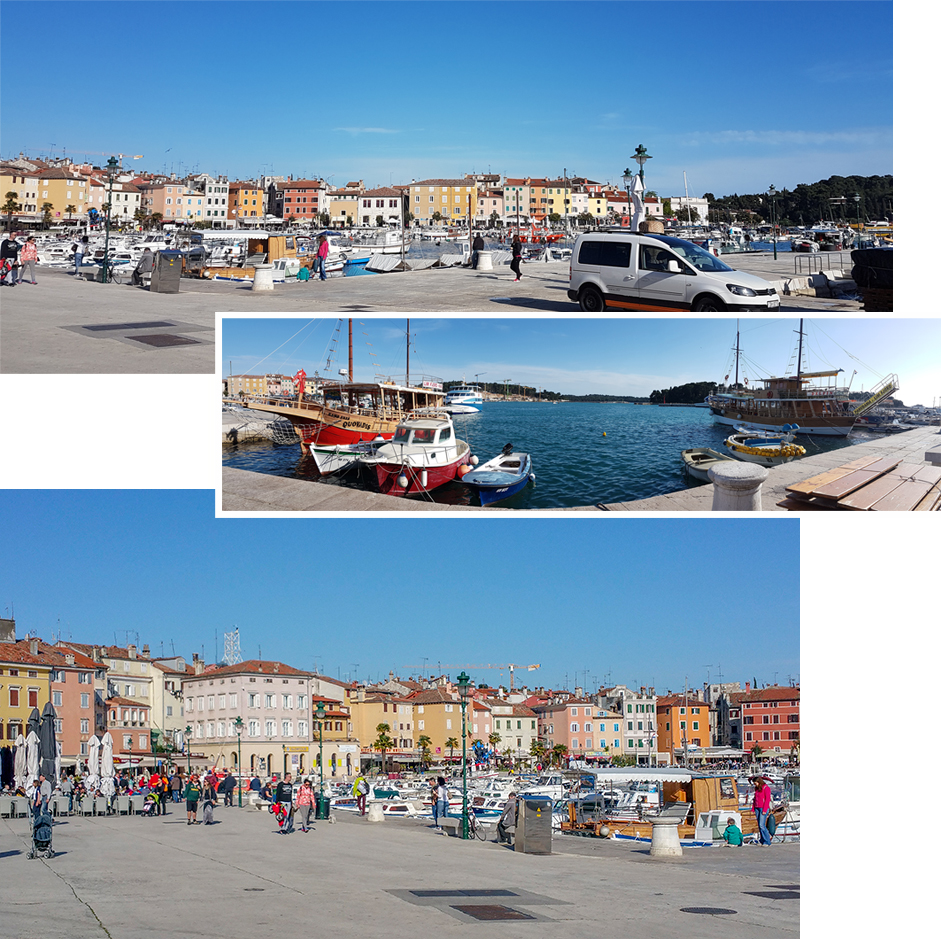 Diana, who we were supposed to meet sent a friend to meet us. This friend told us that the apartment that we had booked (Holiday Home Rovinj Savicenti) had some maintenance work going so Diana had arranged another apartment (Apartments Rovinj Duplex) as a replacement. She led us through the cobbled street of the old town to a house number 61. The  streets were mainly going uphill so it was a good thing that we did not bring along our luggage. 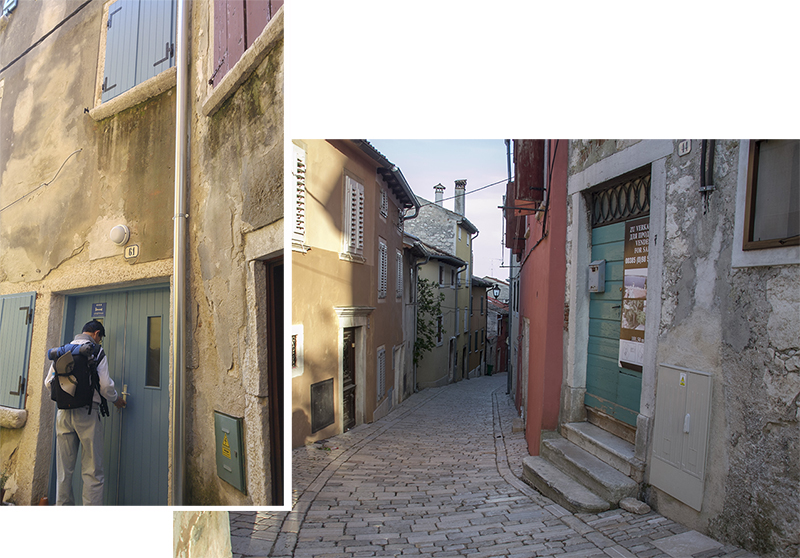 Our apartment along the streets of Rovinj Old town

Our two-bedroom apartment was on the third and fourth levels. It was a long climb to our rooms! Though our apartment was very lovely, the day was too nice to stay indoor, so once we settled our bags we were out of the place in no time. From our apartment we walked further uphill to the highest part of the old town. At this location sat the Church of Sveta Eufemija (Saint Euphemia Cathedral). The church was closed so we could only roam about the compound. 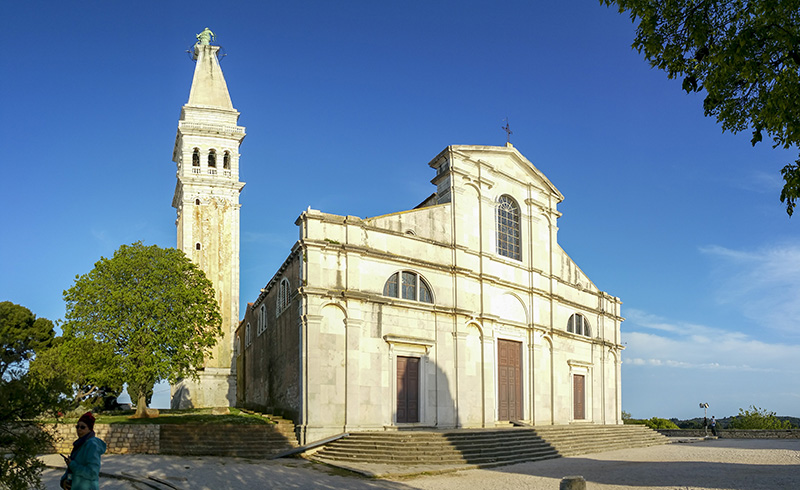 In AD 304, Eufemija a 15 year old  young girl was tortured for her Christian faith by Emperor Diocletian’s soldiers before being thrown to the lions. In AD 800 the sarcophagus with the body of St. Euphemia was moved and lost during a power struggle between Christians and Iconoclasts and somehow found its way off the coast of Rovinj. St Eufemija became the patron saint of Rovinj and the Church was built in 1736 to house the sarcophagus.

From the church there were several paths leading to different parts of the old town. We took the path that led down toward the public carpark. 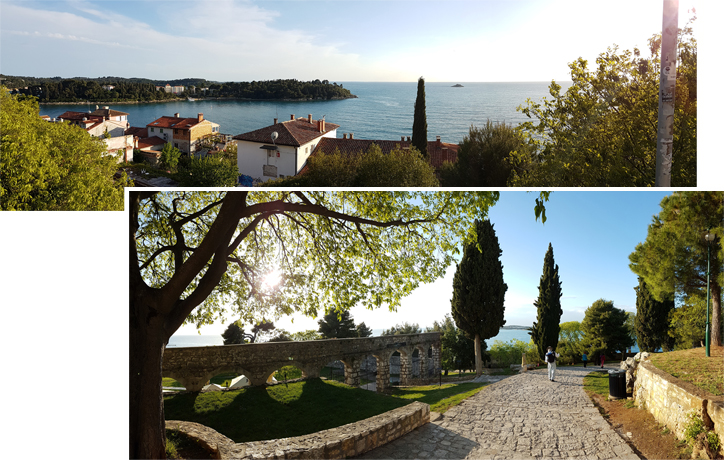 Path leading from Church down to town

Near the public carpark was several restaurants, we decided to go into Graciano Restaurant. I would love to sit at its terrace at its 2nd level that overlook the peninsula tip of the old town. Unfortunately the sunlight was too strong and sitting there would be too hot, so we sat in the dining hall on the ground level. 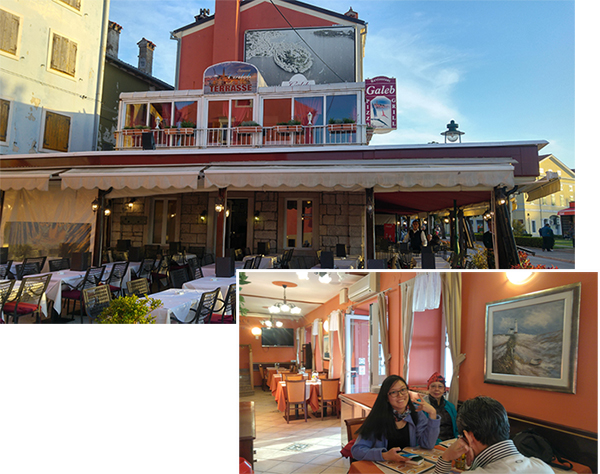 Dinner was delicious, four meals and a large bottle of mineral water,  costed 357 kuna (SGD$70 or €48) which was very  reasonable. I thought the priciest item was the mineral water that cost 30 kuna, and it barely filled four glasses. We just needed drinking water but the restaurant only served mineral water in a glass bottle. The meal was very delicious especially the tuna, it was Croatia tuna, freshly caught from the sea around Croatia. 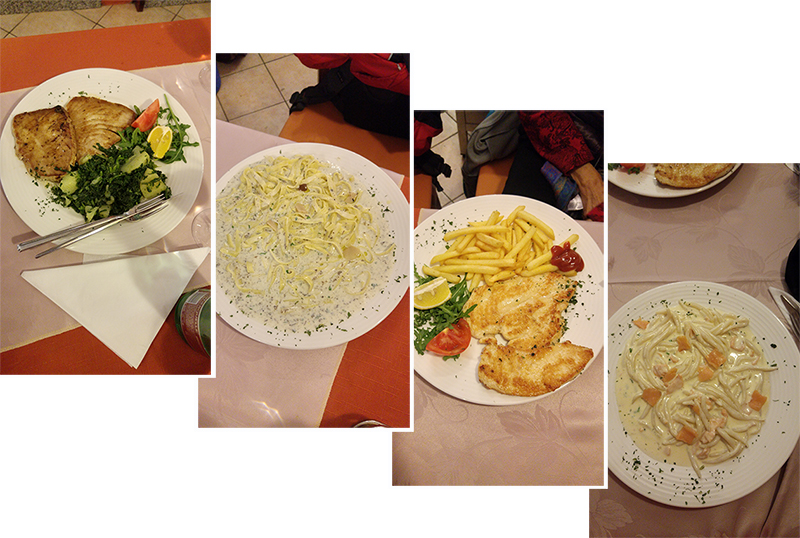 Our dinner at Graciano Restaurant

As we were eating the sun was also setting. It was a pity that from our dining table we could not see the sun setting, I definitely regretted not sitting at the terrace on the upper level. Yat Thong and Lin Ying left our table several times just to photograph the sunset while mum and I stayed put to guard our table and food. The pictures they brought back was very stunning. 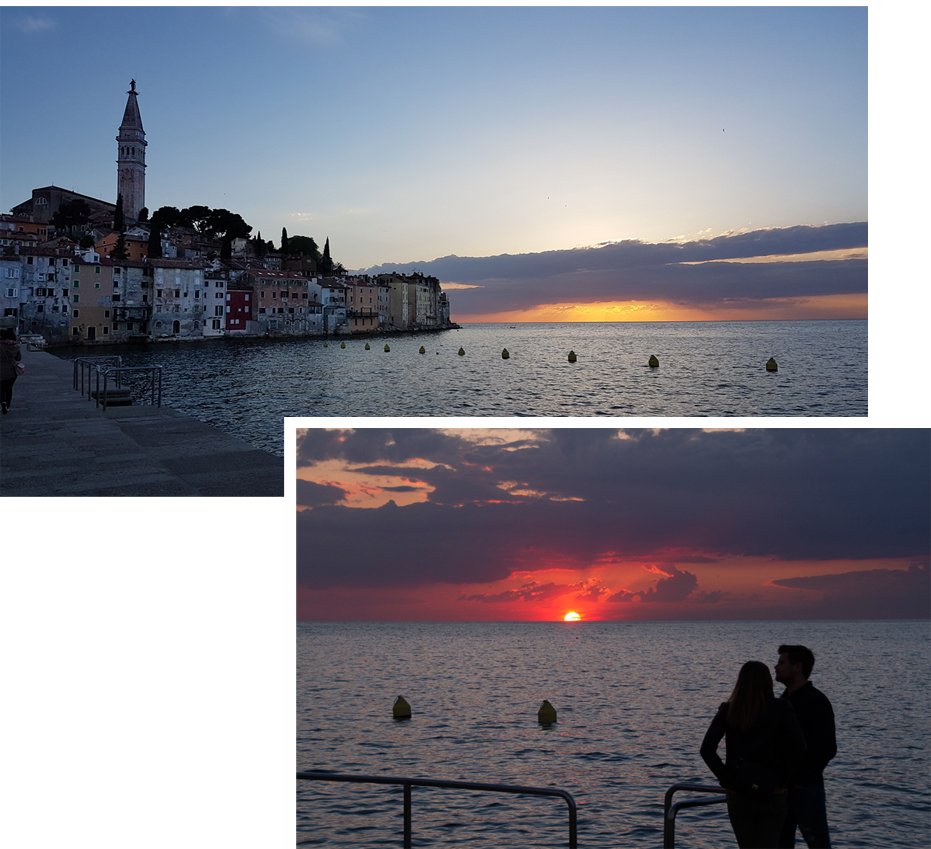 The sun set over the sea horizon just to the right of the old town. As the sun set the lamps in the old town houses started to light up. We could see the lighted tower of Church of Sveta Eufemija standing so tall and straight rising above all the town houses. The sight was very lovely, very blue, very gold, very pink and very orange. Stunning! 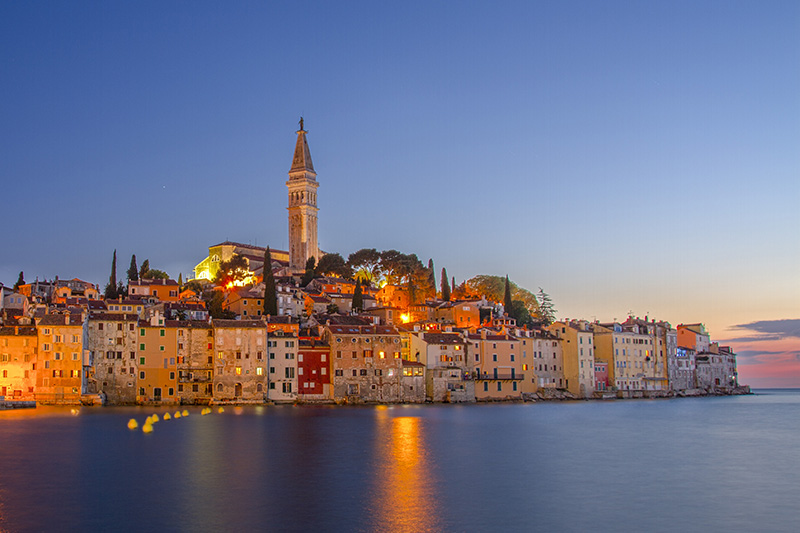 After the sunset we took a slow walk back to our accommodation. The  streets and the town houses looked different at night. Under the golden light of the street lamps even the cobble stones on the streets shined. 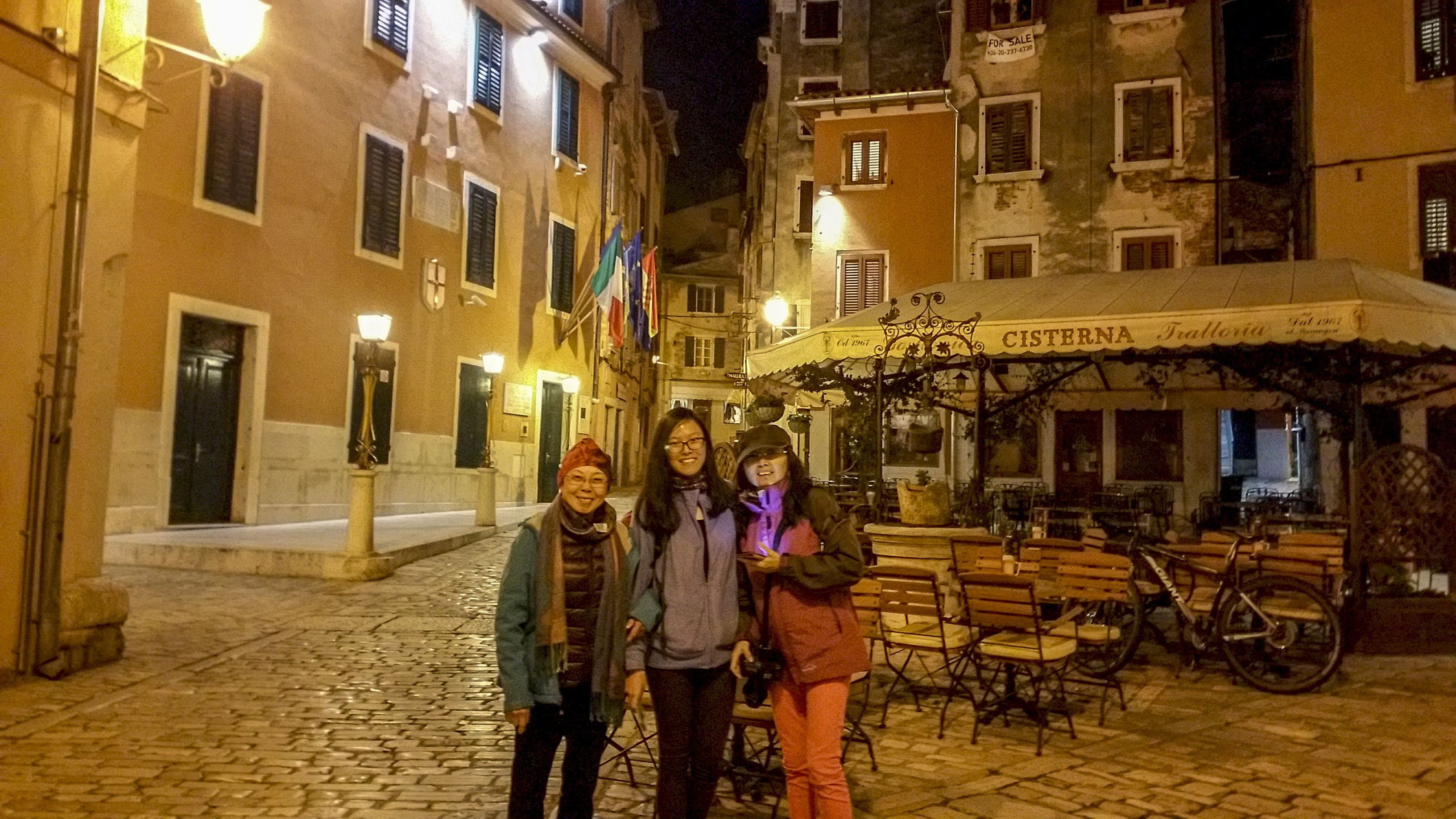 Night out on the street of Rovinj Old Town

Our accommodation for the Night 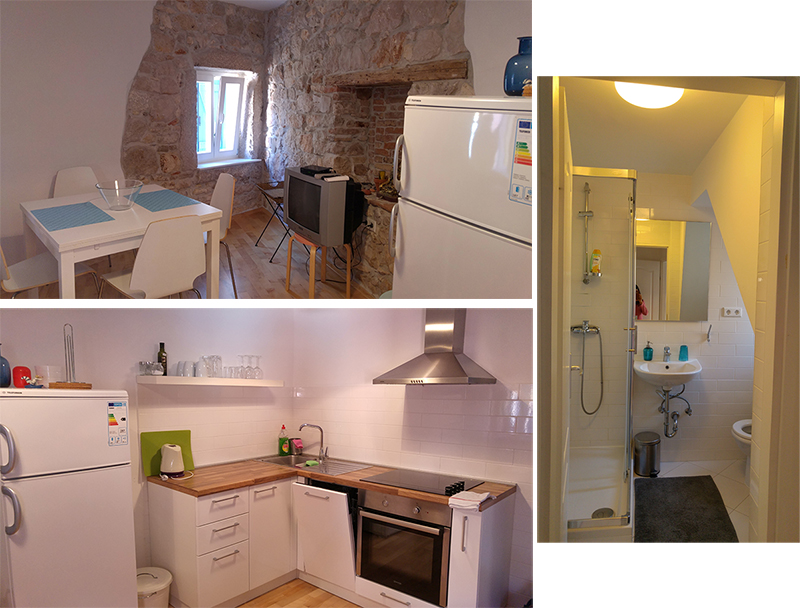 Room 1 of Apartments Rovinj Duplex (on the third level)

A wooden stair led up to another bedroom on the fourth level. Wow this room was even larger, it had a double bed and a single bed. There was also a toilet on this level too. It was nice to have two toilets in the same apartment, this way we had a shorter queue per toilet.

I booked the apartment under Booking.com for SGD$104 (€66 or 500kuna). The accommodation in Rovinj old town was pricier than those in the outskirt and I was welling to pay the higher price. 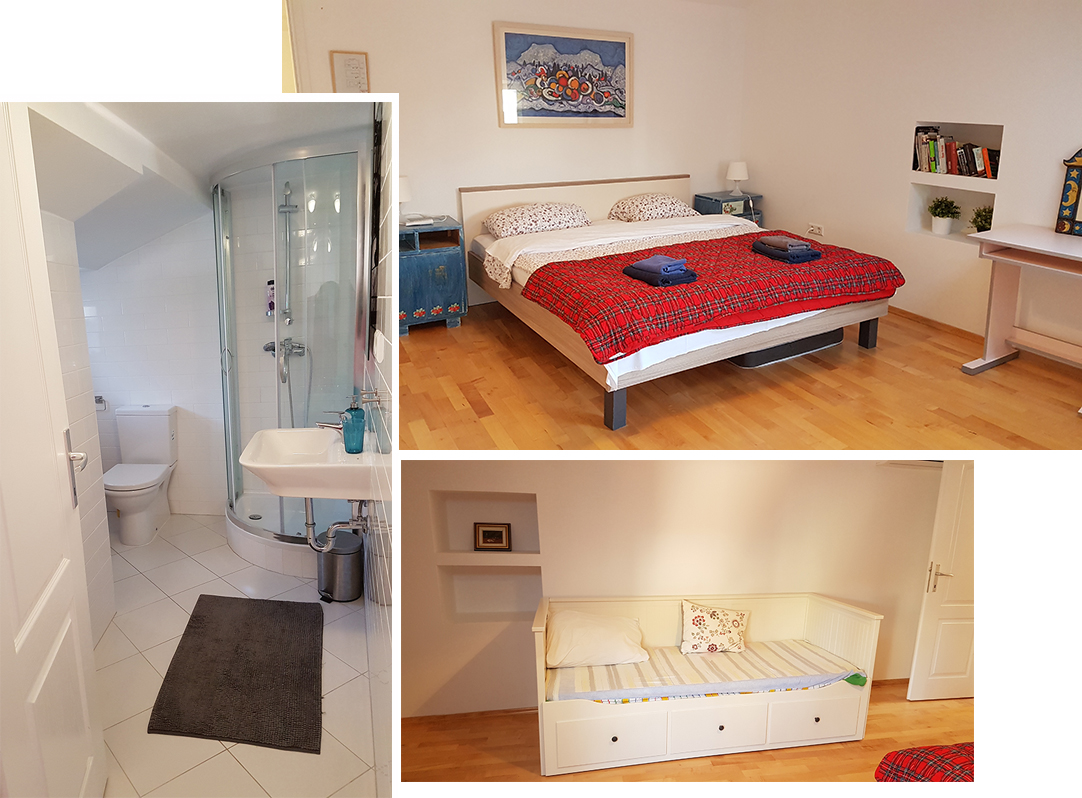 Room 2 of Apartments Rovinj Duplex  (on the 4th level)