We intended to spend the whole day exploring Lake Plitvice. Lake Plitvice was a huge national park which would take as long as 8 hours to properly explore it on foot. In the event of bad weather we could postpone the visit to the next day. That was one of the primary reasons we were staying for two nights at Pansion Krizmanic.

Of course the pansion being only 1.2 km north of the national park meant we could be at the park once it opened and stayed late till it closed without worrying about the travelling distance back to our accommodation.

The weather was fabulous and we were at the park for 8.5 hours. We arrived at 8 am and left at 4.30 pm. By 4.45 pm we were back at our room for a good rest before we had our dinner in the restaurant of Pansion Krizmanic

Since our accommodation was only 1.2 km from the park entrance we had the option of walking to the entrance and saving on the parking fee (7 kuna an hour, or SGD $1.40 or about €1 ) at the ‘entrance 1’ carpark. But we decided against that as we would be walking in the park for many hours and we should put our energy at the right place.

At 8 am, our car was practically the only car in the entrance 1 carpark. We crossed the road to the ticketing booth and bought  tickets for all. The tickets costed 410 kuna (SGD$82 or €123), at 110 kuna per adult and 80 kuna for student.

From entrance 1, we followed a path that led us down a slope through a zigzag path. Very soon the lakes and falls were within our sights. It was a series of complex lakes, falls and more falls. There were wide falls, narrow falls, short falls and tall falls. Each falls higher than the other. Lakes that dropped over as falls and falls that fed into lakes creating more falls and lakes. Wow the sights were  wonderful. 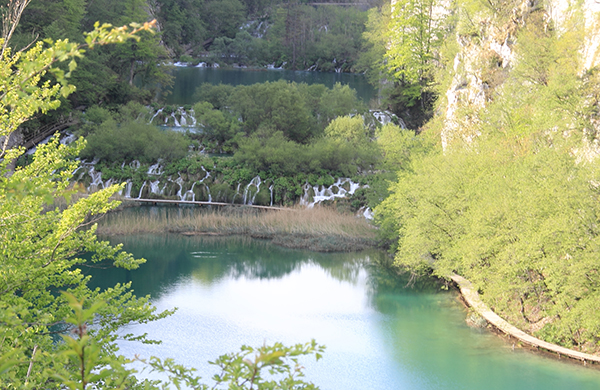 From far we could already see Veliki Slap (Veliki Falls), it fell from a height of 78 m. The water that gathered in a lake below the falls soon spilled over more rocks and drops. We could see a boardwalk built over the rocks giving visitors a closer access to Veliki Falls. 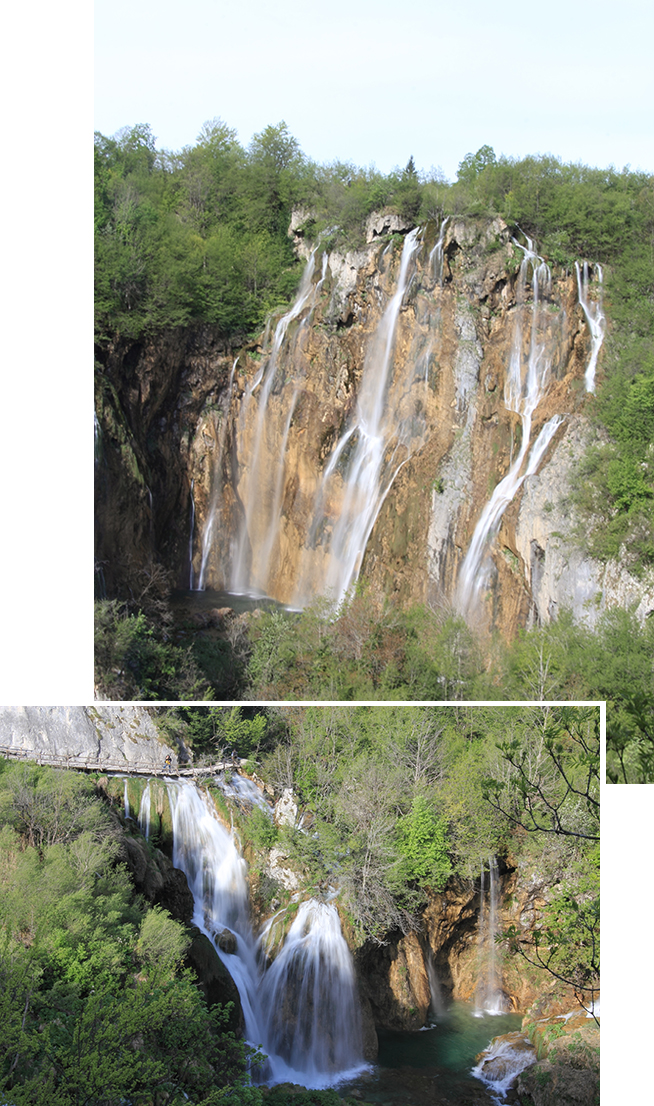 We walked down the zig zag path to the lake level, crossed a narrow piece of land to reach the other side of the canyon then turned right to continue our walk to Veliki Falls. Everywhere we could see water gushing about. Some from the sides of the cliff where we walked passed, some from under our feet beneath the boardwalk. It was amazing that there was this endless massive supply of water. 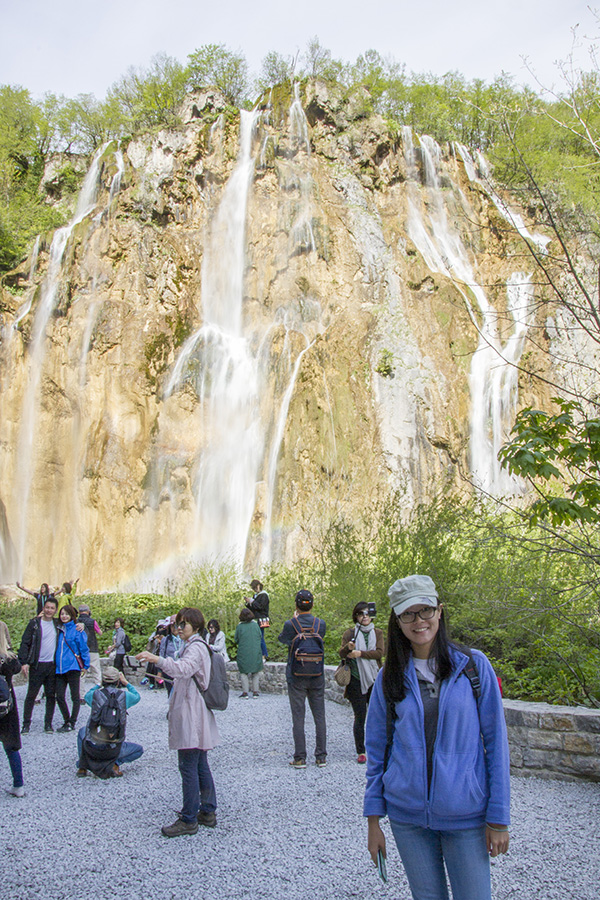 Plitvice Lakes was the largest National Park of Croatia, it was a World Heritage site. There were 16 terraced lakes connected by waterfalls. Four of these lakes formed the Lower Lakes and the rest the Upper Lakes.

Entrance 1 brought us to the Lower Lakes.  At Veliki Falls we saw a set of stairs that went up a cliff to probably some high view point. We decided not to go that way but to move south. It was a scenic stroll on the boardwalks built by the sides of the lakes crossing them at a few places. Our destination was Jetty P3. 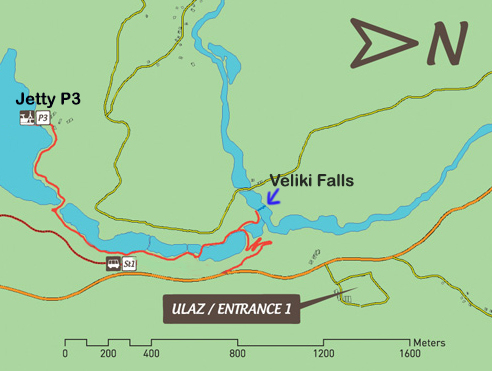 The water was turquoise blue and so clear that at many places we could see all the way to the bottom of the lakes. We were very amaze with this lovely nature park. This park was huge and to explore all the 16 lakes would be a huge challenge. The best way to sustain our energy till the end would be to walk slowly and rest often. 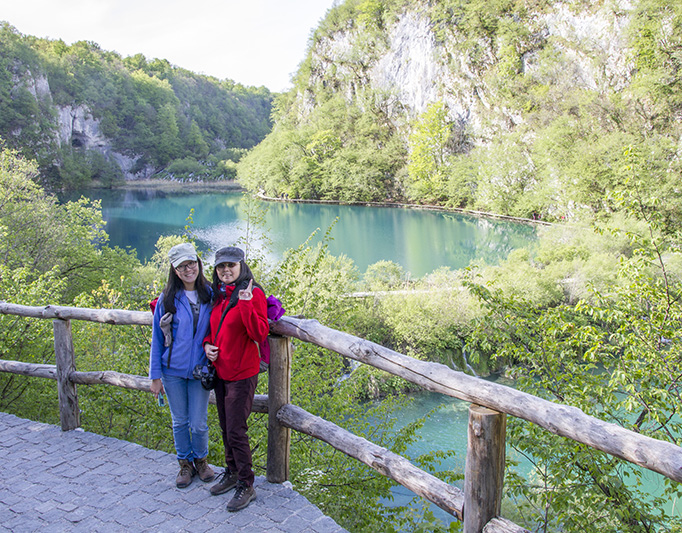 Wooden steps and stairs were cleverly built into the terrain so that visitors could move easily from one lake to the next. Every turn and twist brought into view more falls after falls. The designers of these stairs did a wonderful job of constructing the structures directly over the rocks and gushing water so that visitors could be as close to the falls and lakes as possible. 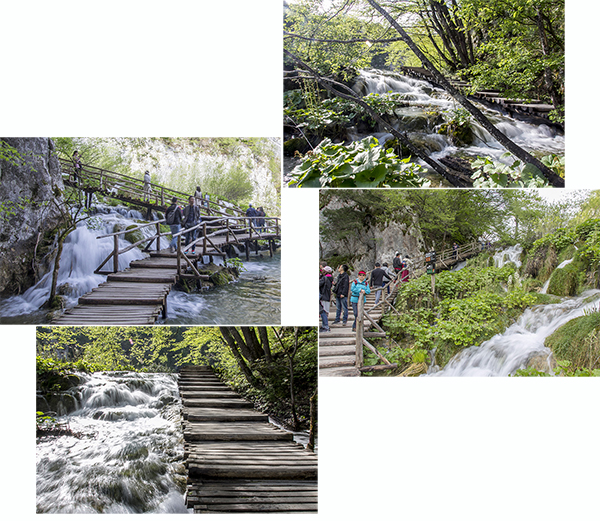 Steps and steps taking us up the lake terraces

Similarly the boardwalks were built so low over the water that with a stretch of my hand or leg I would be able to touch it. This clear blue water was so close so alluring that I had this urge to run my hand in it. Unfortunately, since swimming was not allowed in the lakes, I figured I should not touch the water. 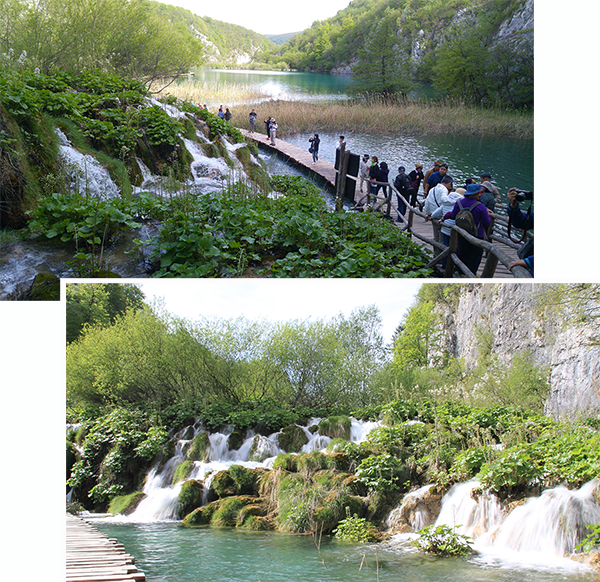 At 10.30 am we reached Jetty P3, we had been walking for about 2 hours. At the jetty there were several small cafes selling food and restrooms (toilet). We decided to break for a very early lunch, so we spreaded the food (bread, ham, lettuce and tomato) that we had brought along on a picnic bench and bought hot cafe lattes from the nearby store and had a great picnic. The lattes were lousy whereas our on the spot sandwich creation was delicious. 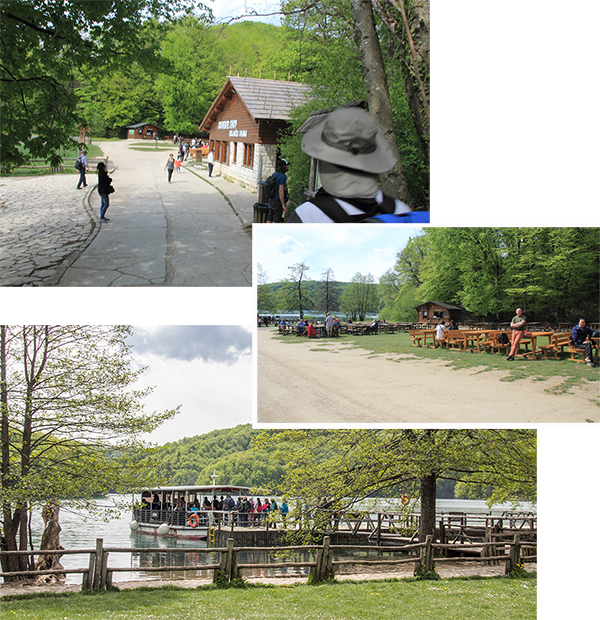 At 11.30 am we waited at Jetty P3 for the next boat.  We did not have to wait long for one to arrive. Our admission ticket to the park included all boat rides and bus rides. The boat and buses used in this park were electric vehicles. The boat took us from the northern side of Lake Kozjak to its southern side Jetty P2 some 2 km away.

Lake Kozjak (Jezero Kozjak) was the lowest of the “Plitvice Upper Lakes” (12 lakes all in). It was also the largest and deepest lake of the entire lake systems in the park. As our boat chugged southward we could see some visitors walking the trail that bordered the right side Lake Kozjak instead of taking the boat. It would be a long 3 to 4 km walk. 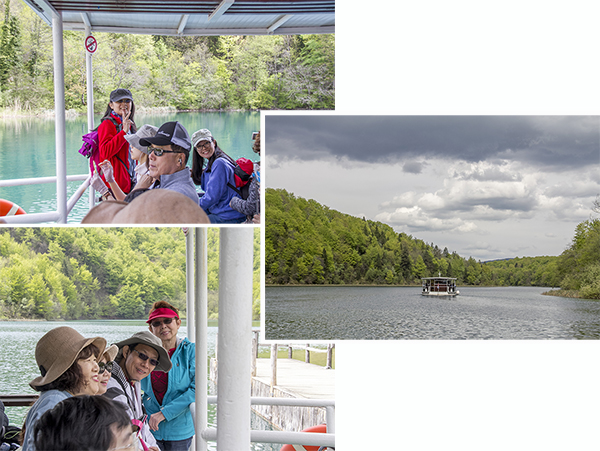 On the electric boat

Upon reaching Jetty P2 we got off, it was already passed noon and we still had 12 more lakes to visit! Though it was noon, the weather was cool. There were also more people along the trail now, many of them had came into the park via Entrance 2.

Upper Lakes walk from Jetty P2 to the Lake Prošćansko

The Upper Lakes was similar to Lower Lakes, lakes after lakes, falls after falls we passed them on  boardwalk and on   stairs. After a while they all began to look alike. We were not in a rush, we were not in a hurry to reach the end or to leave. 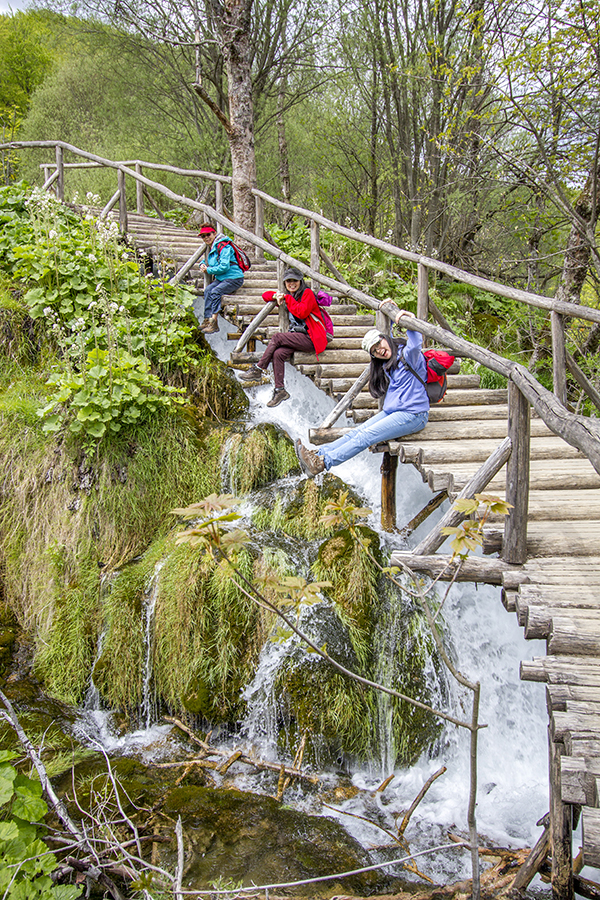 We set aside the entire day for the park and could stay till it closed at 7 pm if we had too. At each sights we loitered around until the other visitors moved away so that we could take great shots of us, lakes and falls. 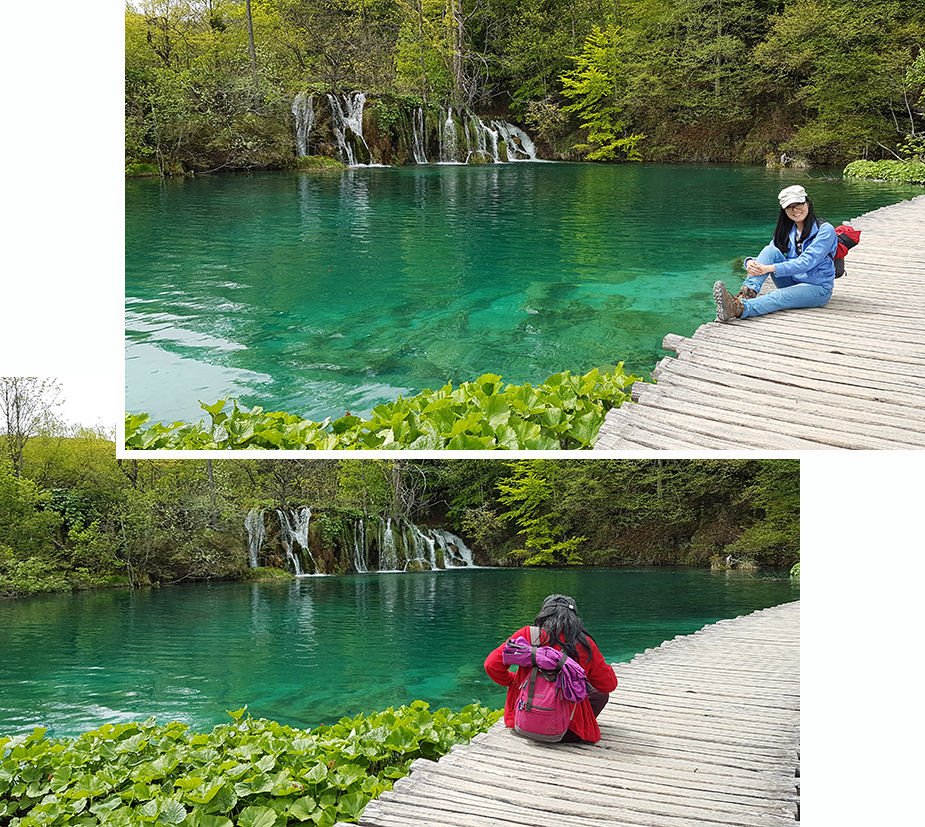 Resting on the boardwalk 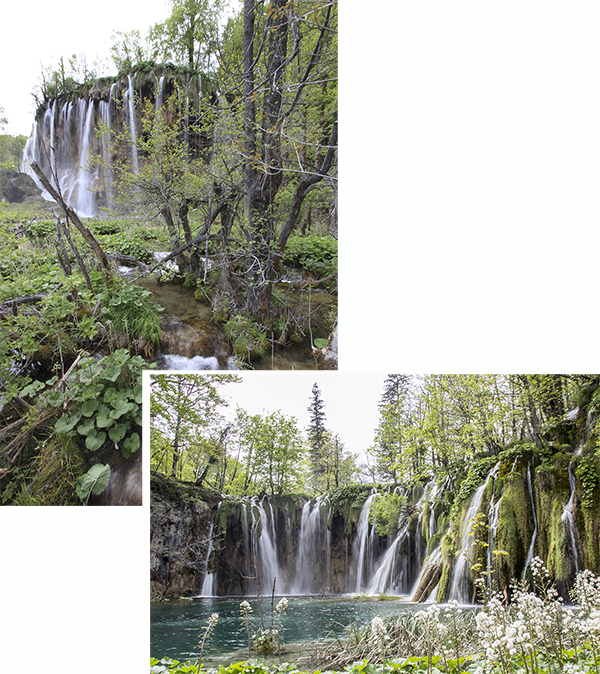 By 3 pm, six and a half hours since we started we reached the last of the Upper Lakes. Proscansko Lake was the second largest lake in this systems of lakes. We started with the trail that went on the left side of the lake (clockwise) unfortunately part of the trail was flooded so we turned back and went to the trail on the right side. We went as far as we could until the trail bordering the lake ended and finally we turned back. 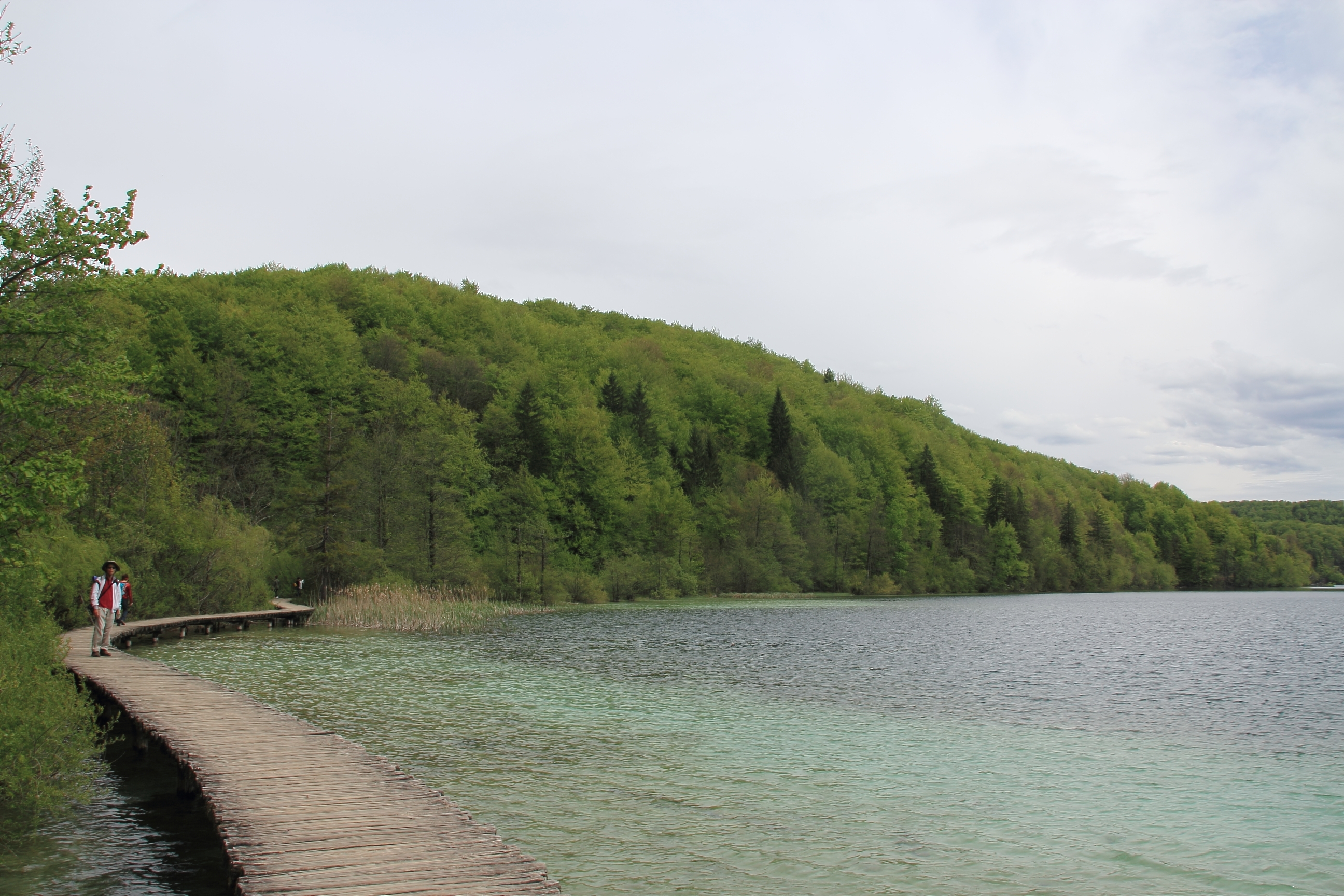 We walked back to the start of Lake Proscansko where Bus Station 3 was located and waited for about 10 minutes for the bus to arrive. Our return trip was completed by taking the electric bus from Station 3 to Station 1.

On the ride from Station 3 to Station 1 there was not much to see. The bus road was on a higher ground bordering the lake. The sides of the road were packed with trees. Occasionally we got glimpses of the lakes below but the sights were quickly blocked by more trees. The bus stopped for a short while at  Station 2 (which was near to Entrance 2 and also Jetty 1) before going on to Station 1. 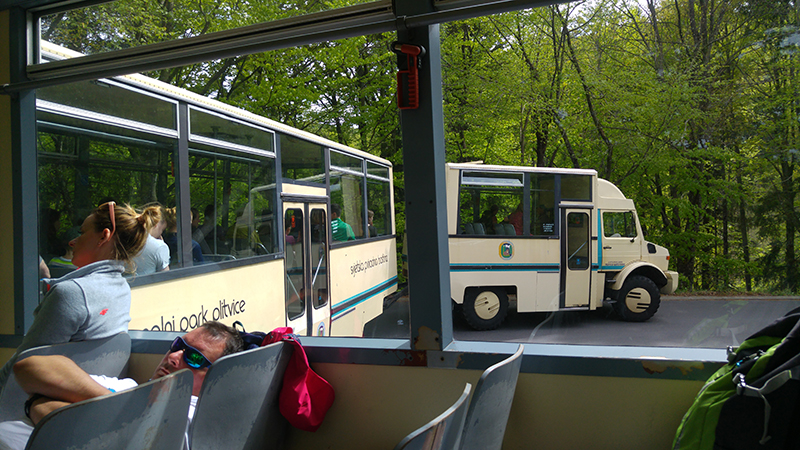 From Station 1, we took a short walk to Entrance 1 where we would exit and pick up our car. This short walk turned out to be a HUGE SURPRISE!. There were a couple of high view points that looked down to the Lower Lakes and WOW the sights were stunning! 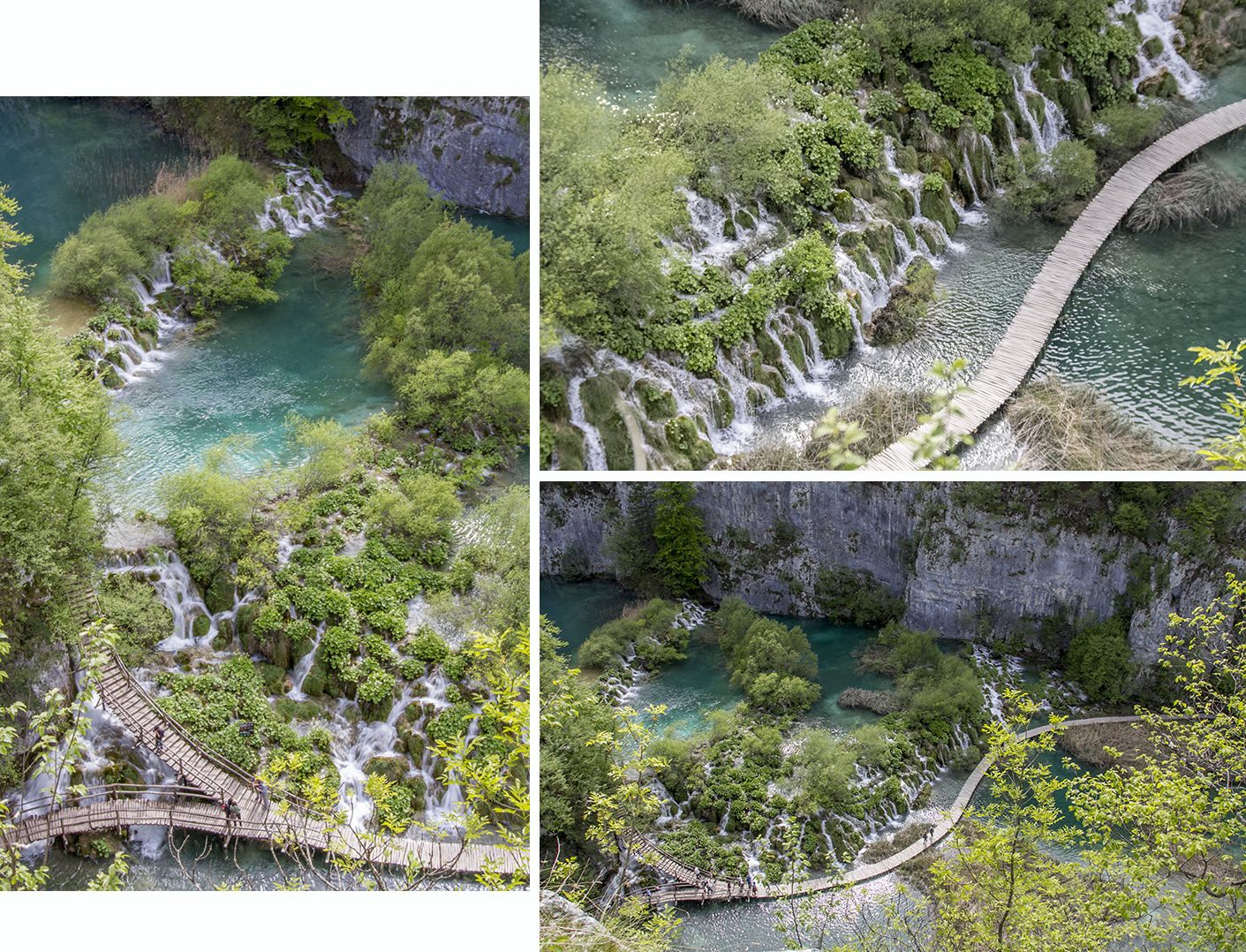 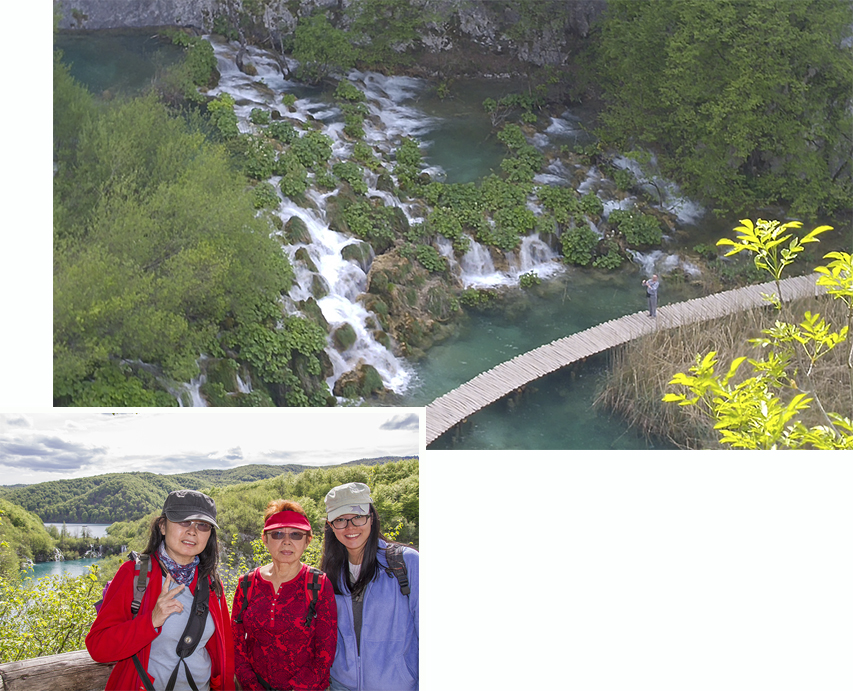 Top down view of the Lower Lakes

These views were the BEST of all the views that we had seen today! If we had not arrived by our own rental car we might not feel the need to exit at Entrance 1 where we had parked our car. We could very well exit by Entrance 2 and would totally miss the best part of Plitvice Park. 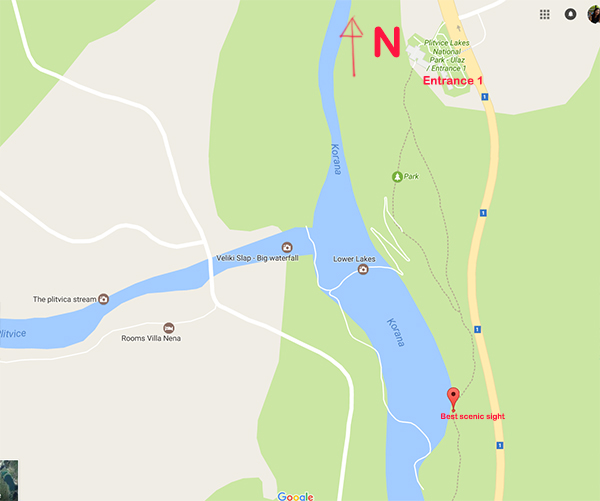 Most visitors upon entering Entrance 1 would take the path that went down a zigzag path to the Lower Lakes because the sights of Veliki Falls and the Lakes were captivating. Who would have thought that instead of going down but to continue walking on a dirt path toward Bus Station 1, they would reach the best viewpoint of this park! 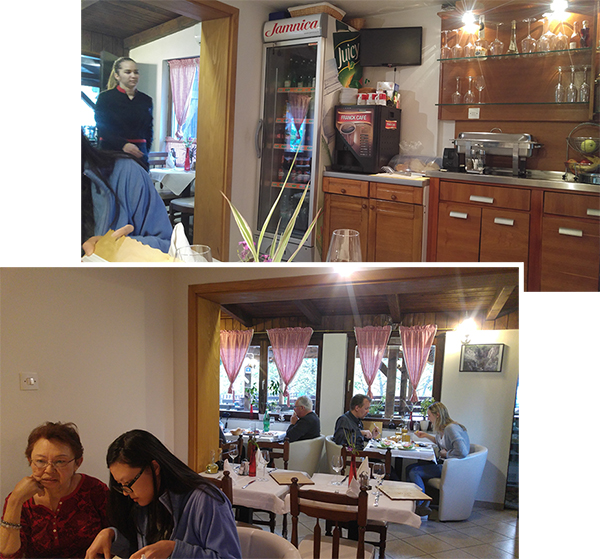 We ordered a Croatia dish which consisted of thick slices of veal that were cooked for at least two hours over slow fire. The waitress had recommended the dish and highlighted that it was the house specialty. The veal was very tender but overall I found it a bit bland.

The entire meal costed 460  kuna (SGD$92 or €61). That was the price for a 3-person meals. We learnt from the previous occasions of this trip that a 4-person meal  tended to leave us too full and unable to enjoy desert after dinner. 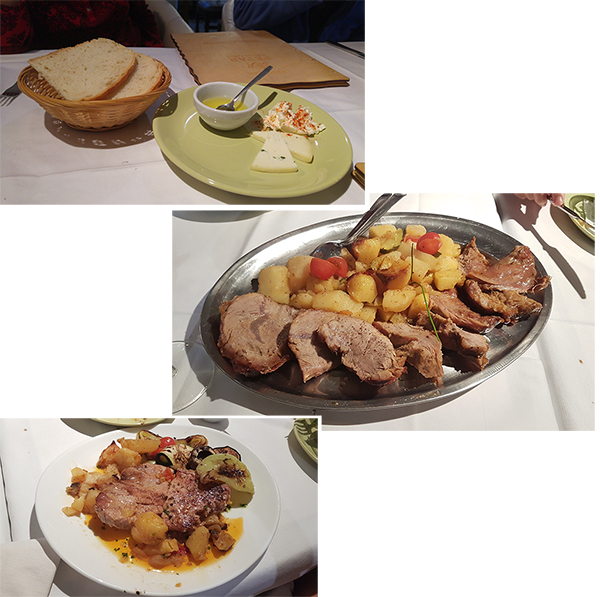