Our main destination for the day was Strbacki buk (Strbacki falls) in Una National Park of Bosnia & Herzegovina which was only 75 km ( 1hr 45 mins) from Pansion Krizmanic of Lake Plitvice. To get to our destination we would have to cross from Croatia into Bosnia & Herzegovina. After the crossing we intended to stop at the first Bosnia town to get some BAM (local currency) and a data sim card. We should be able to reach Strbacki buk by early afternoon. 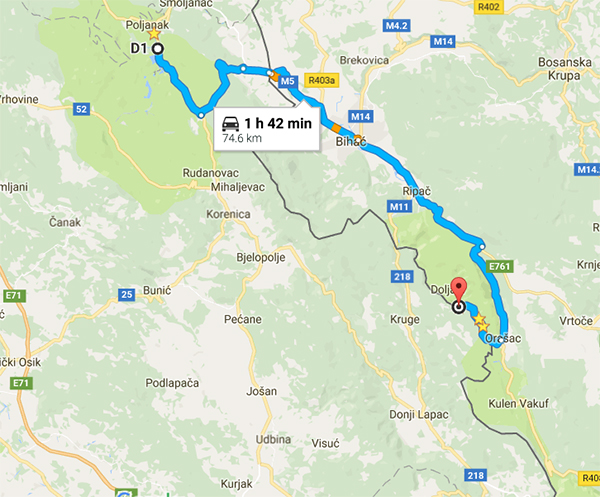 We crossed into Bosnia & Herzegovina without any problem. The first town we came upon was Bihac. At Bihac we got our BAM, data sim card and coffee. We were at Strbacki falls (Strbacki buk) of Una National Park by about 2 pm, the falls was more impressive than our expectation.

We left Pansion Krizmanic at about 9 am and drove about 24 km to the border of Bosnia & Herzegovina, the journey took only 20 minutes. Crossing the border was very simple, just an exit stamp by a Croatian officer and an entry stamp by another officer at the Bosnia & Herzegovina counter window.  Based on our google map the nearest town was Bihac with was only about 15 km from the border. We continued our drive ahead not knowing what to expect. 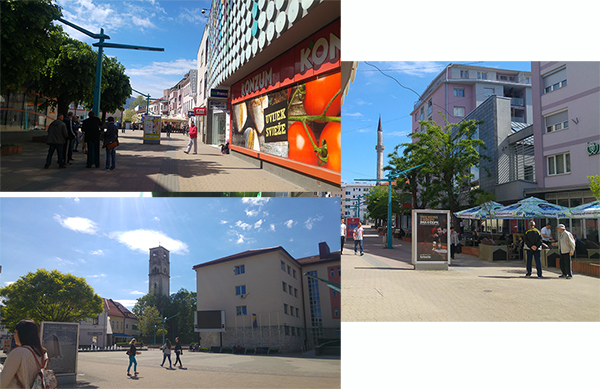 The town looked good, modern, with more highrises (4 to 5 storey building) than we had seen in Croatia and Slovenia. The place was tidy and clean and the atmosphere was peaceful. Our knowledge about Bosnia & Herzegovina was that this country was involved in a war not too long ago. It was a three year war that shook the world with its numerous violent incidents. But surprising in Bihac we saw no remnants of the war about. I supposed it was already about 20 years since the war ended (somehow to us the war seemed so fresh) and Bihac had recovered so well. 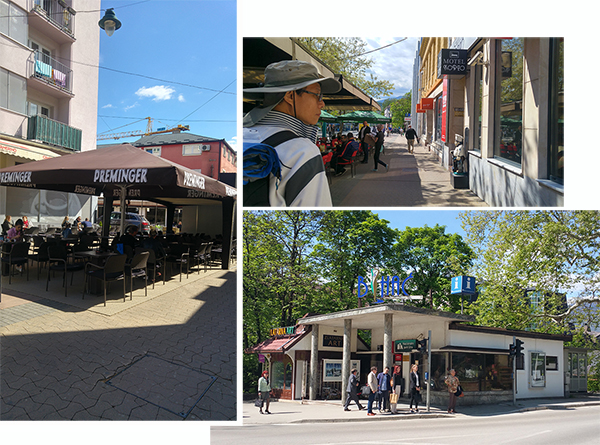 We walked into the first bank that we encountered, it was just by the town car park where we left our car. Surprising parking was not free, (3 BAM an hour). At UniCredit Bank we bought BAM (also know as KM) using Euro at a good exchange rate.  From the bank we walked a short distance into the town center and almost immediate saw a telco, Eronet. 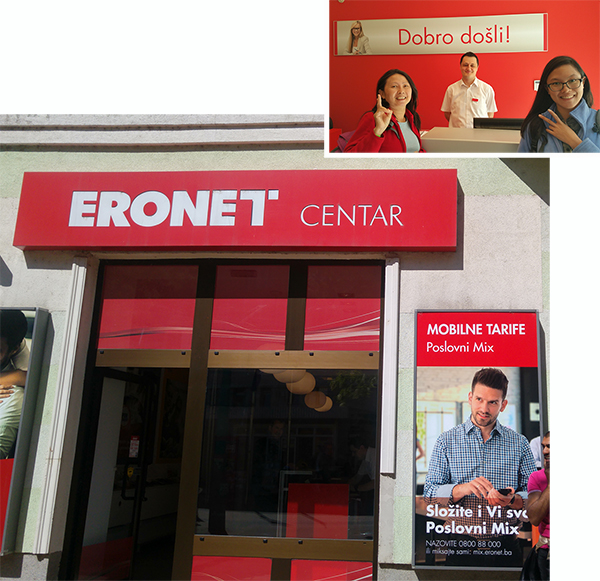 Eronet counter staff did not speak English but her manager did. He answered all our questions patiently about the various prepaid data sim card plans available at the telco. We bought a 30 days – 5G data plan for  20 BAM (SGD$16 or €10). There was a cheaper plan, 7 days – 2G data plan for 10 BAM, which we figured would be too restrictive for four persons.

Before we left the place, we turned on the “hotspot” of our spare phone installed with the newly bought data card and enabled all our other phones to connect (tether) to that “hotspot” phone. It was always our practice to get all these connections up and running before leaving. This was because some data card did not allow other phones to connect to it by hotspot and some data card needed online or call activation which involved understanding the local language. From our previous experience it would greatly reduce a great deal of inconvenience just to get all these matters sorted out before leaving the shop.

From Tripadvisor I found a nice cafe, Mlin Restoran, near Bihac. The reviews of this restoran were great, it was located at a very scenic spot beside the Una river. Based on the map location of Tripadvisor we drove to the restoran, unfortunately we just could not find it. We searched both sides of the river where the restoran was supposed to be located but still could not find any sign of the place. In the end we gave up and settled for another restaurant further south of the river.

This restaurant, Sojenica, was also located beside the river. It looked quaint and very local so we went in for our morning coffee break. We loved the interior of the restaurant, it was cosily decorated. 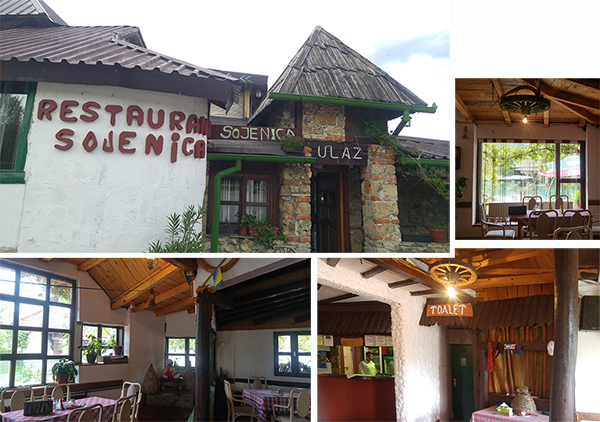 Since we were only at the restaurant for coffee, the cafe staff recommended that we sat outdoor. The outdoor terrace was beautiful, it overlooked the Una river. We decided it was a good time to have a taste of a local desert and was recommended “Baklava”. 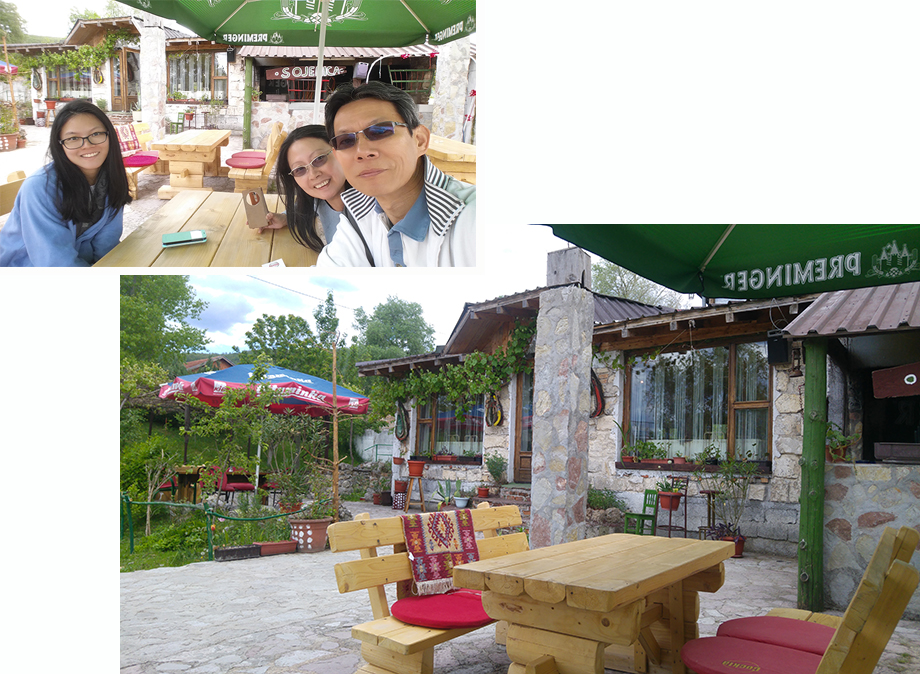 The coffee came in some sort of special container. So delightful. Each cup of coffee costed only 1 BAM (SGD$0.80 or €0.50) each. Wow the price was great. It looked like Bosnia & Herzegovina was an inexpensive country. The local baklava was some kind of crispy rolled up biscuit with grounded sugar syrup soaked walnut in the center. The desert was too sweet for me and two mouthfuls of it were all I could consume. 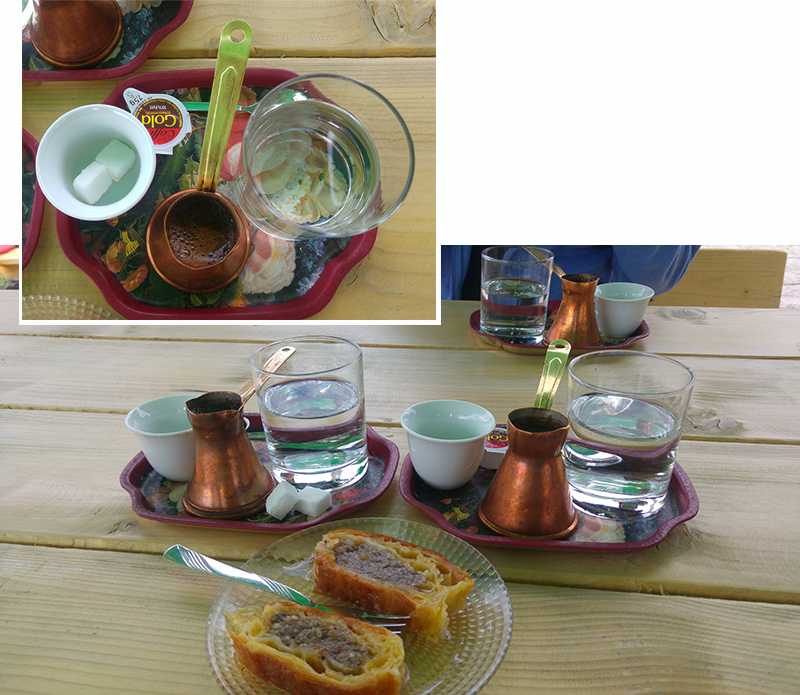 The staff was very friendly, he suggested that we relocated our seats to a boat that was anchored by the riverside so that we could enjoy the river view as we drank and ate. Just for the fun of it we agreed and he helped us move all our drinks down to the boat. 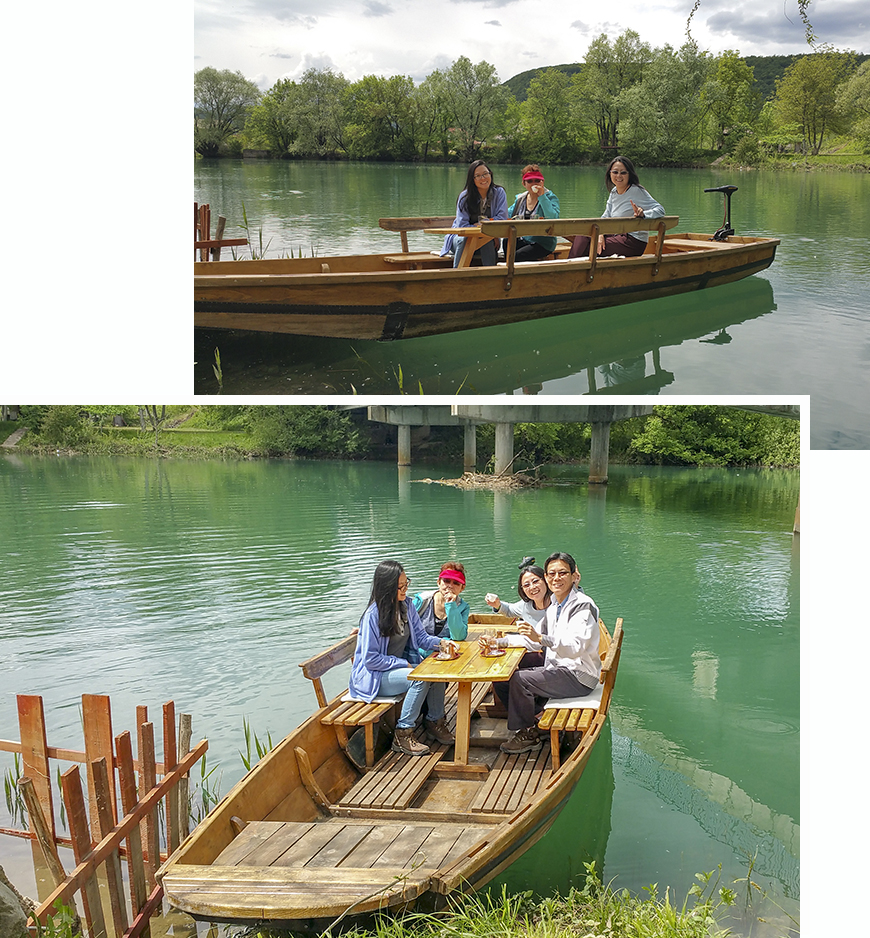 Enjoying our coffee in a boat parked by Una River

Una National Park was situated in the northwestern part of Bosnia & Herzegovina mainly in the area of Bihac municipality. From Bihac to Park Entrance 1 was about 7 km, from there was a dirt road that led to Strbacki buk. I had read on the internet that that dirt road was very bumpy, full of potholes and very uncomfortable to drive on. So we decided not to go by Entrance 1 but to drive further south for about 16 km and entered the park by Entrance 3. Entrance 2 was a trekking entrance not accessible by vehicle. 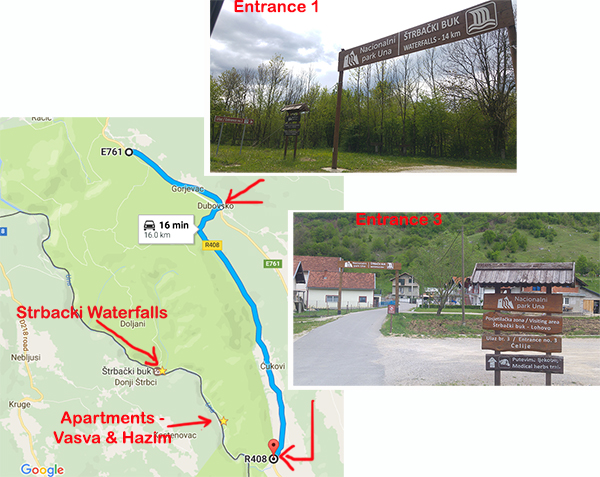 Both entrance 1 and 3 would led to Strbacki waterfall that was located somewhere between both of the entrances. From Entrance 3 we had to drive northward to the falls, along the way we passed some farmlands and local houses, one of which was Apartments -Vasva & Hazim where we would stay for the night. After driving for about 8 km on the dirt road we reached the carpark of Strbacki falls.  Before the carpark was a ranger hut where we purchased admission tickets to the falls. It was 6 BAM (SGD$4.50 or € 3) for each person (no discount for senior or university student). 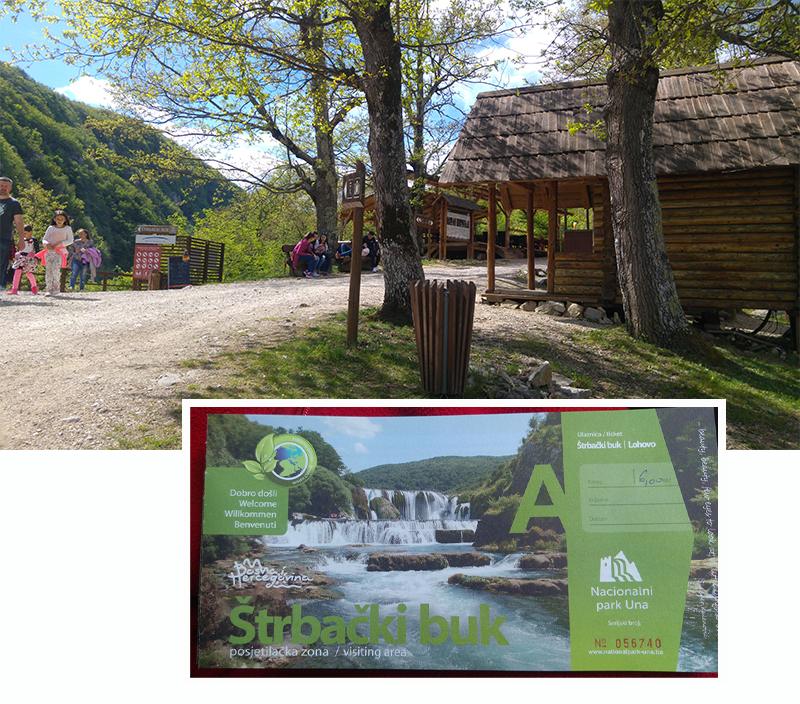 From the carpark we walked on and saw a large picnic area with wooden shades and benches overlooking the Una river. The falls was still not in sight. We followed a wooden boardwalk to go up slope and then we saw the beginning of the falls. 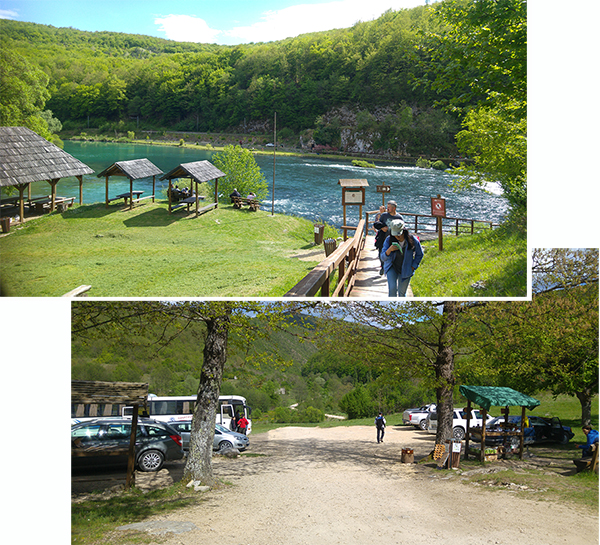 Wow! The falls was huge and forceful. It was so much larger than our expectation. It was so unexpected because upriver at the picnic area the river still looked very tranquil and just a short distance downstream was this roaring huge falls. 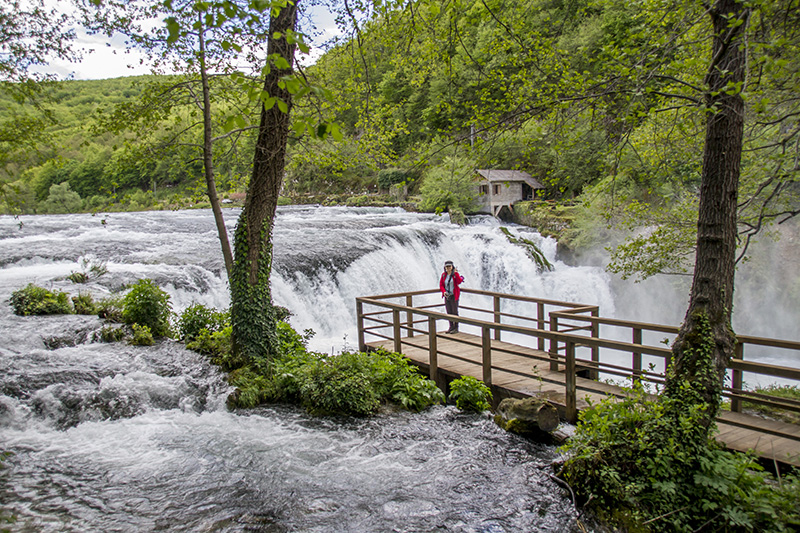 There was a couple of extension decks from the boardwalk that allowed visitors to go near to the falls. Standing on these decks we could feel the sprays from the falls and hear the thundering roar of the water. It was awesome to be so near the gushing water and yet still felt so safe on such treacherous grounds. 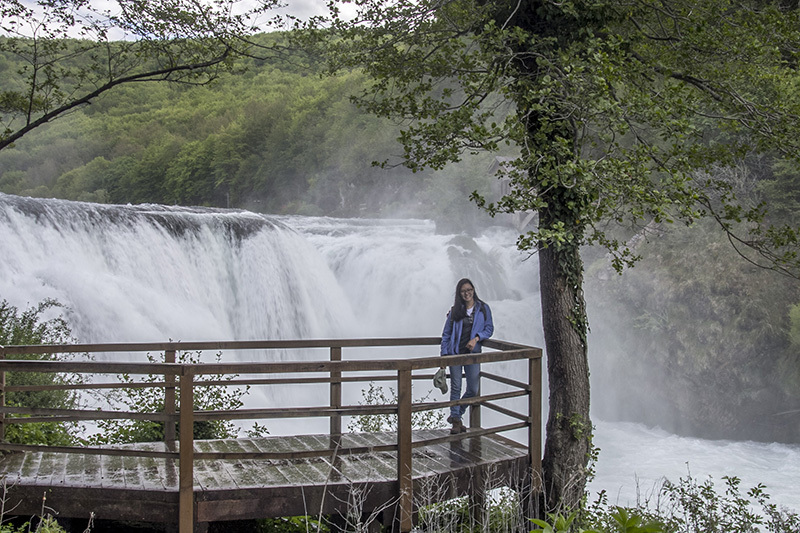 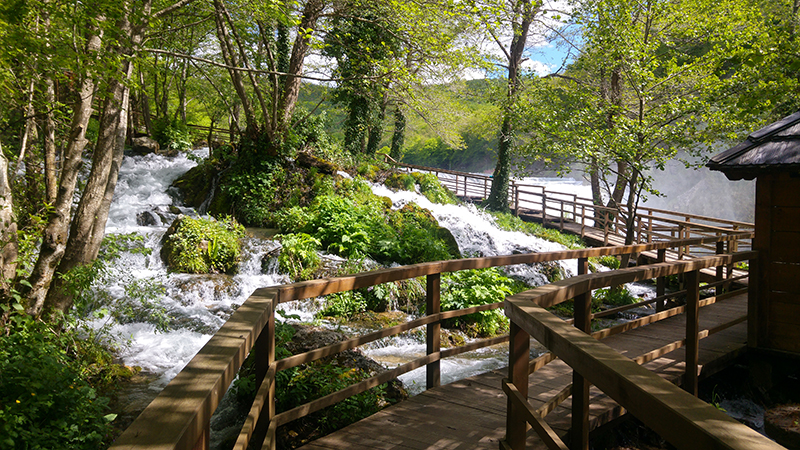 From the Bosnia & Herzegovina side we could see across the falls and Una river to the Croatian side, at the section near to the falls were stretches of high vertical cliff wall. It looked unexplorable  to visitors. 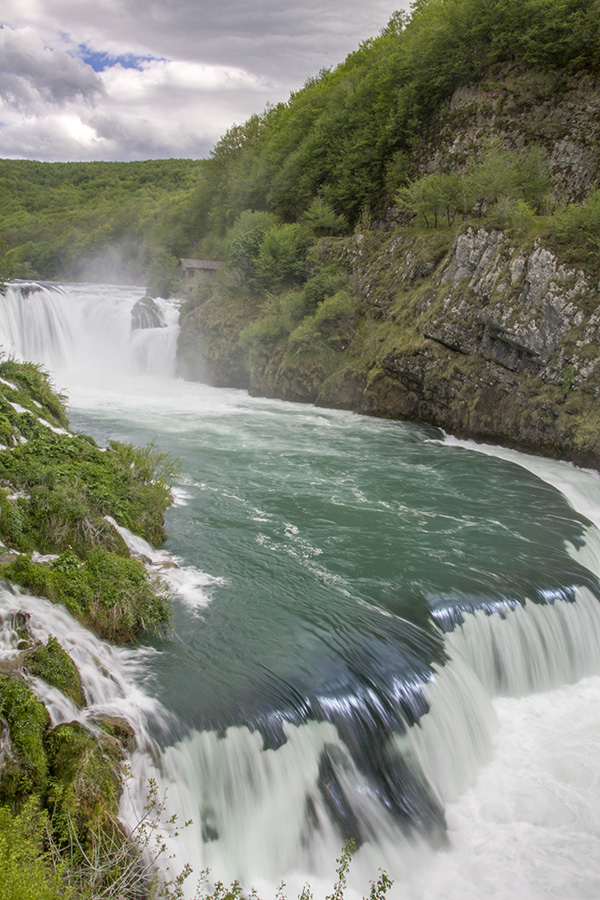 Croatian Una Mamea Park was across the falls.

As for the Bosnia and Herzegovina side, the river bank was less steep and proper boardwalks, view decks and viewing towers were erected along the riverbank to allow visitors to view and experience the magnificent and forceful Strbacki buk up close. 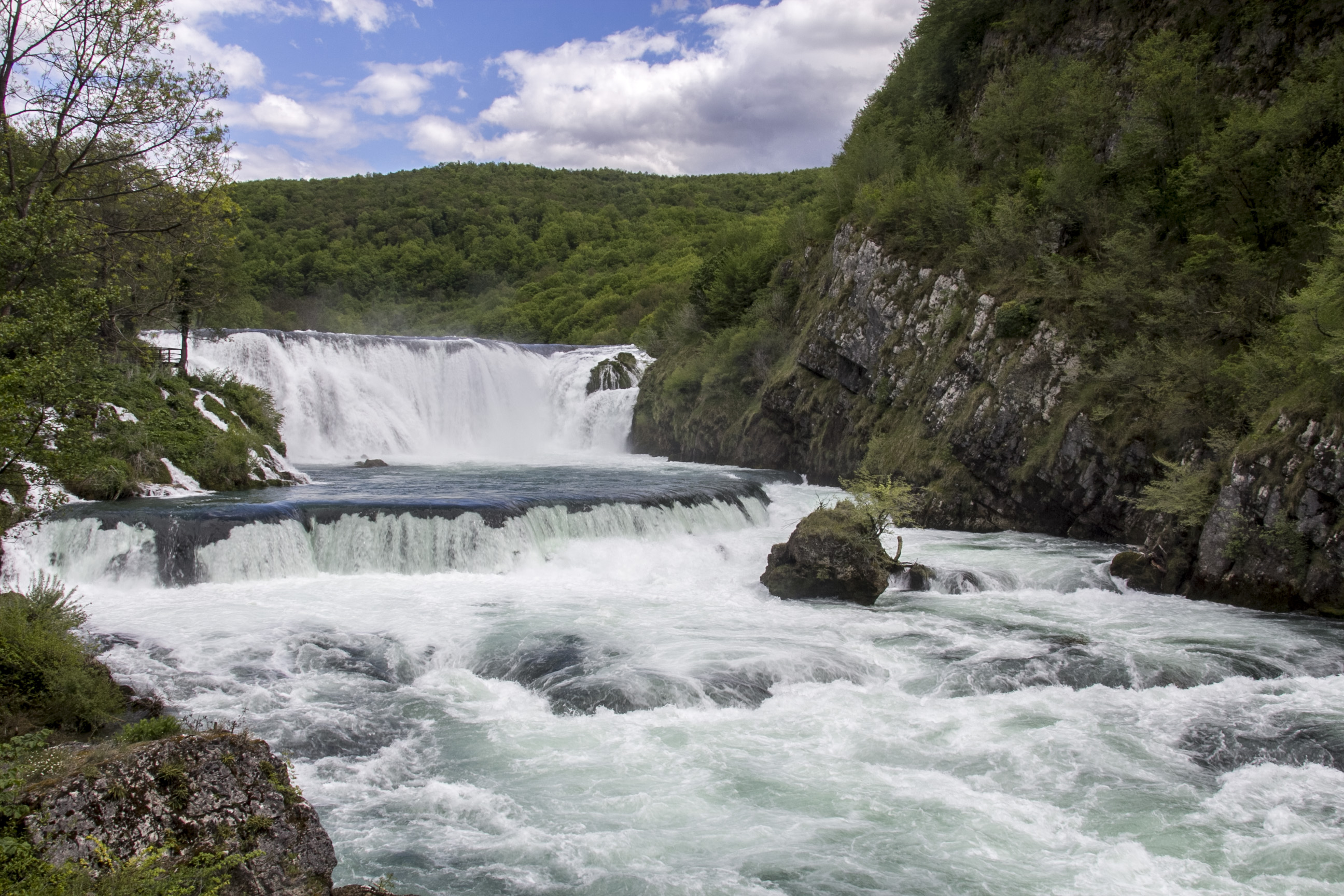 The many layers of the falls

At a few locations on the boardwalk we could even venture out to the water edge. Though the terrain was rugged with careful stepping over the big rocks it was possible to go closer to the river. A very amazing experience. 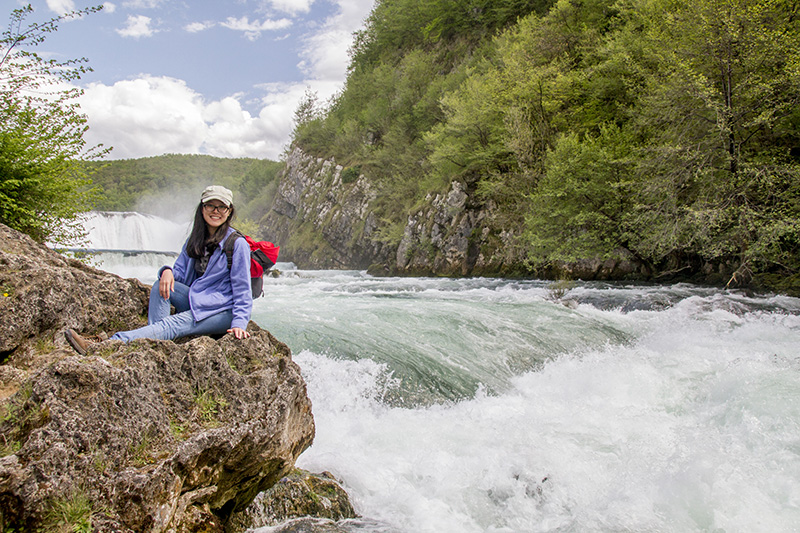 We had booked two rooms at Apartments – Vasva & Hazim on Booking.com. Our rooms were in a two storey house belonging to Vasva and Hazim which was located beside the Una River about 4 km south of Strbacki falls. It was a white and cheerful house. There was no sign board pointing to the house so we had to refer to a picture of the house on booking.com to identify it.

We had chosen this place because of its near proximity to Strbacki falls. This was planned as such to cater for possible delay at Lake Plitvice. In such situation we would check into the apartment for the night and visit Strbacki falls early the next day.

Lake Plitvice in Croatia was one of the crucial highlights of our trip so we had put in place a rainy day contingency plan. If rain prevented us from visiting Lake Plitvice the day before we still had today for the lake. This would mean we could only leave Lake Plitvice in the early evening after visiting the park and would reach Apartments – Vasva & Hazim only at night. 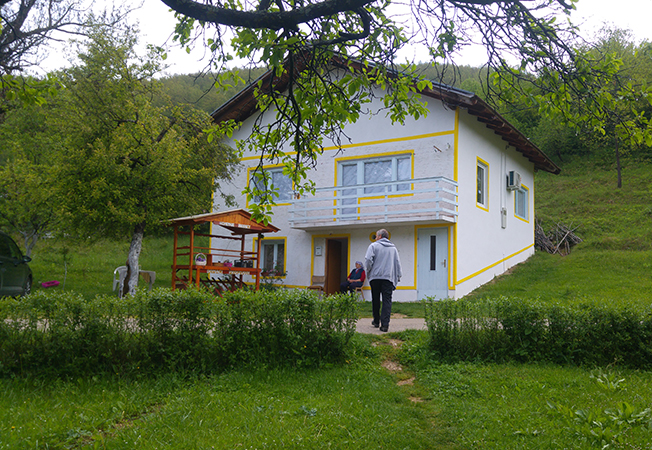 House of Vasva and Hazim

Hazim, his wife and his sister lived on the ground level of the house. There were three guest rooms on the 2nd level accessed by a separate private staircase entrance on the right side of the house. Of the three rooms we had booked two of them. The rooms were bright and cheerful, clean and neat. It also had free wifi. The twin room was for 45BAM (SGD$33 or €22.50) a night and the double room overlooking the garden was 48BAM (SGD$36 or €24) a night. 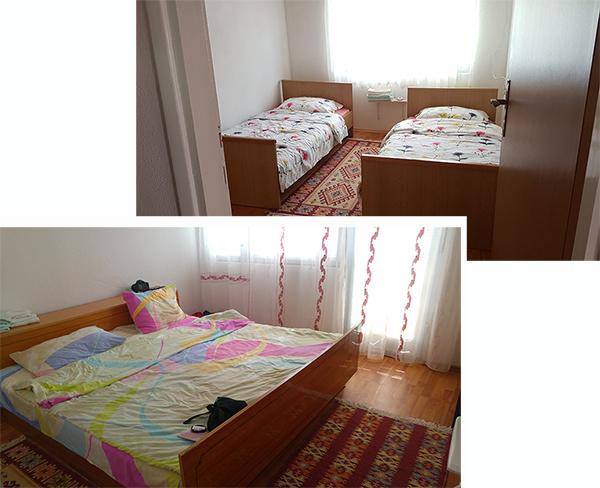 All the three guest rooms shared a guest kitchen and a toilet on the 2nd level. As for showering we had to use a toilet located on the ground level just beside the staircase. Since the third guest room was not rented out we had the whole 2nd level to ourselves. 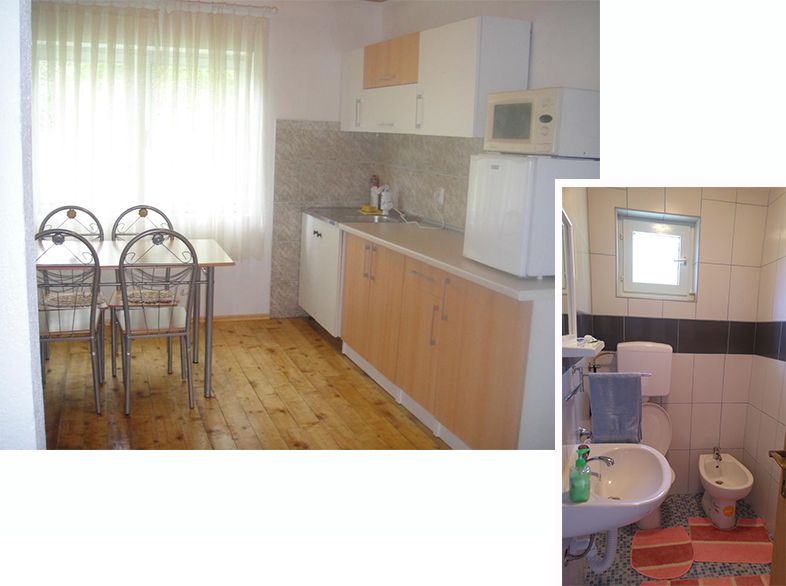 Shared Kitchen and toilet on the 2nd level

We came prepared, to cook our meals at this place. Vasva & Hazim house was located far from the town so we did not expect to find any good eating place nearby. After our coffee break in the early part of the day, we stopped at Konsum (a supermarket chain) to buy our food supplies. We had bought a grilled chicken, grapes, lettuces, eggs, tomatoes and onions and had a filling and relatively inexpensive dinner. The only issue I had with the kitchen was the electric cooker which took a long time heating up. 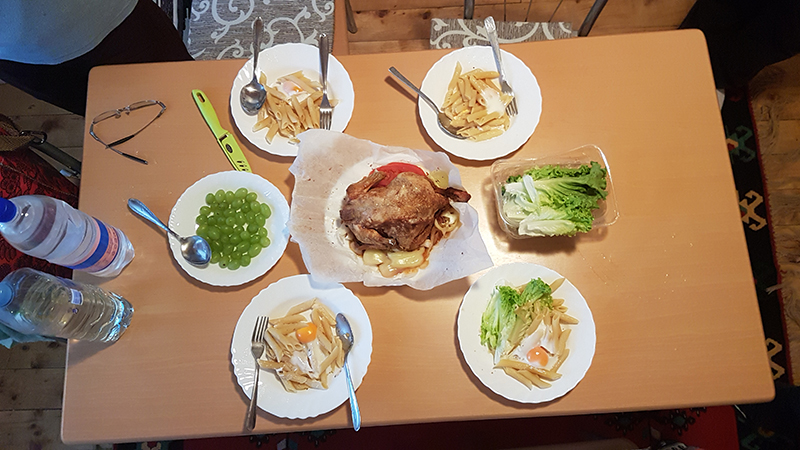