All in we were in the three countries for 16 nights and 15 full days. On the 16th morning we drove straight to the airport and flew out of Croatia. These three countries were so intertwined that it only made sense to cover all three in the same trip.

We started our road trip from Zadar of Croatia and drove in a clockwise loop and ended at Split of Croatia. The total distance drove was 2240 km. We stayed 9 nights in Croatia, 3 nights in Slovenia and 4 nights in Bosnia & Herzegovina. The total cost of the trip was SGD$11000 for four persons. 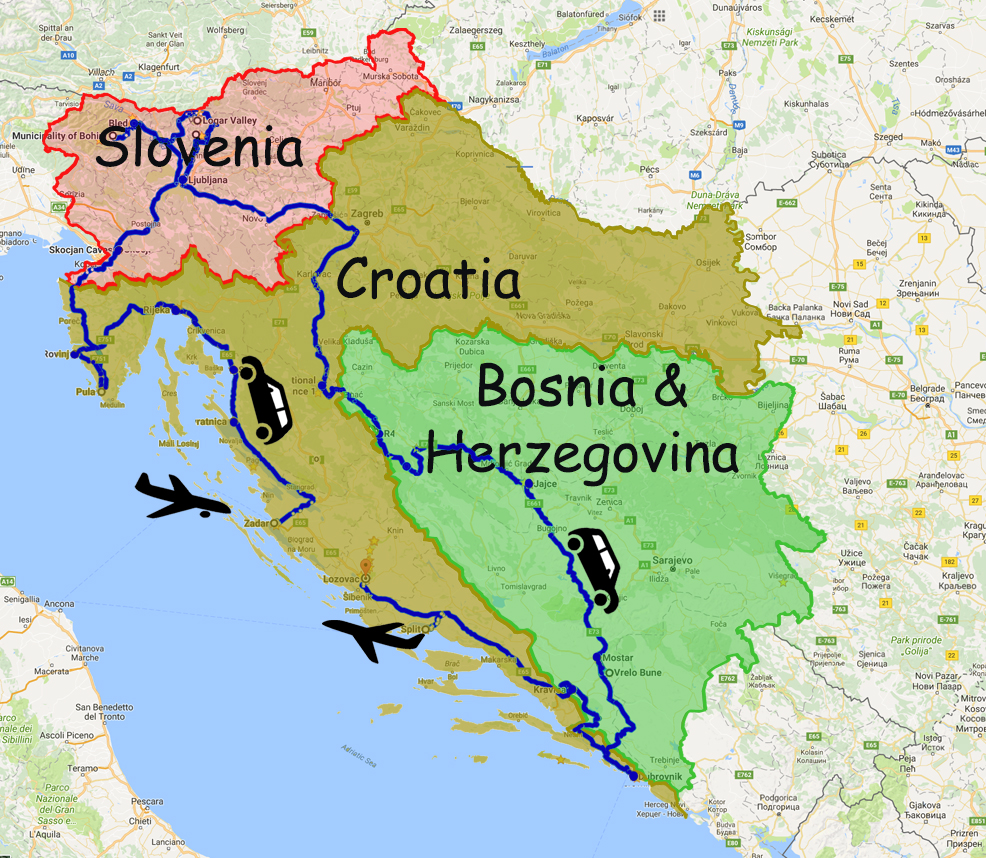 Route trip through the three countries

the places we visited

At the planning stage, there were just too many places we wanted to visit. In the end we settled for just 21 destinations. They included beautiful cities, national parks, waterfalls, lakes, highlands and caves. Each of these destinations was selected because of its stunning scenery, uniqueness and historical values.

Trying a new way of getting to a far away country

Singapore to Croatia would require a total flight time of about 15 hours. There was no flight directly between Singapore to Croatia, usually the flights would have at least one stop. After much deliberation, research and cost evaluation we decided to break our flight journey to and fro Singapore into three legs each.

On the way to Croatia we had stopovers at Dubai and Paris. On the way back our stopovers were at London and Dubai. We managed to arrange each leg of our flight to start in the morning so that even after flying for seven hours (westward) we reached our stop over in the early afternoon. That left us with plentiful of time to roam the place before a good night rest in comfortable beds. With that we were able to start fresh the next morning. Flying seven hours in the daytime was also very pleasant. We were not pressurized to rest and sleep and we spent the time catching up with movies, reading, music and relaxing.

The stopovers at Paris and London (three days and two nights each) were great. It was a sort of an appetizer for our future trips to France and London. Dubai was also a great stopover  as the two one-day/one-night stops allowed us to gradually adjust our internal clocks so we experienced no jet lagged on the “go” and “back” trip.

The total expenses for 4 person for three countries ( Croatia, Slovenia and Bosnia & Herzegovina)  came up to SGD $11,000. It covered everything from flight tickets (the entire way to and from Singapore), insurance, car rental, petrol,  meals, entrance tickets, accommodation etc.  A big chunk of the cost went to air tickets and the next chunk went to transport. Both took up some 63% of the total cost.

The SGD$11,000 did not included stopovers for Dubai, London and Paris. These three stopovers added on another SGD$2800 for the four of us.