Our plan for the day was to fly from Singapore to ChengDu (成都).  We would touch down in ChengDu ShuangLiu International Airport (成都双流国际机场) just after midnight. Then we would proceed to a nearby hotel for a good sleep before continuing our journey to HuangLong (黄龙) the next day. 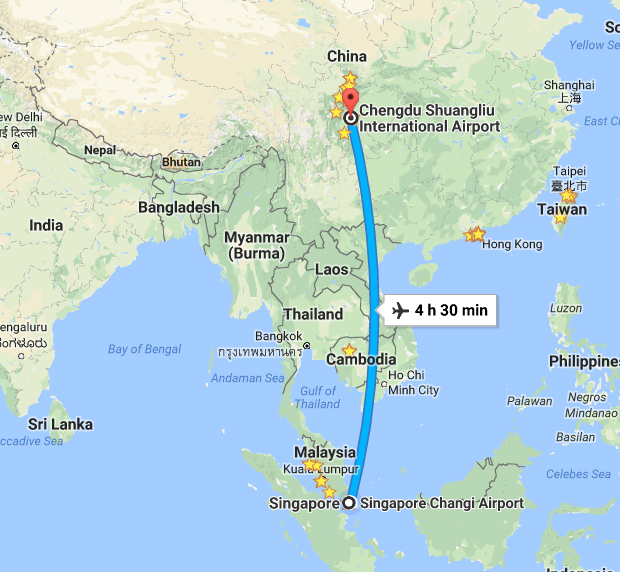 By the end of the day
We flew off from Singapore and touched down in ChengDu ShuangLiu International Airport (成都双流国际机场) on schedule. Custom clearing was smooth probably because of the low volume of passengers at midnight. Luck was with us and we reached our overnight hotel without any issue and went to bed slightly more than an hour after we touched down.

We arrived at the Singapore Changi International Airport three hours before departure, unfortunately the long queue at the SiChuan Airlines counter took forever to clear so by the time we entered the departure hall (after immigration) we had less than 20 minutes to eat our dinner.

We headed straight to TGM – “The Green Market” which was located at Changi International Airport Terminal 2 to have our dinner. We usually did not enjoy plane food, so it was our practice  to eat a good meal prior to boarding the plane. 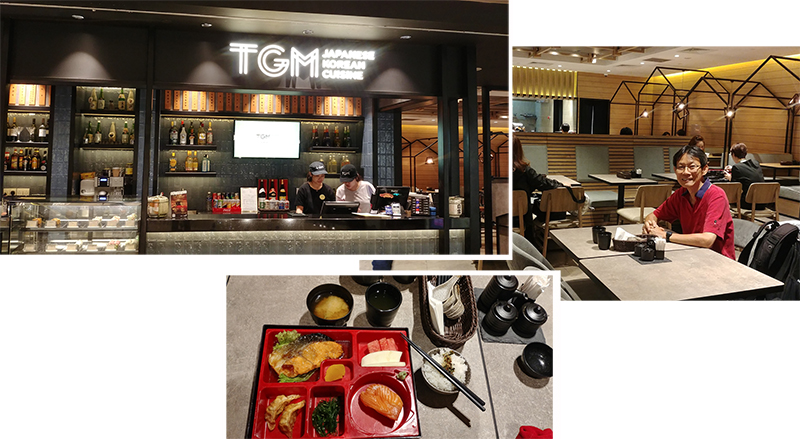 Dinner at The Green Market

Among the several China airlines, SiChuan Airlines offered the lowest flight ticket from Singapore to HuangLong (transit ChengDu) and ChengDu back to Singapore. Cheap tickets probably came with a cost. Our original tickets which departed on the 11th of October was cancelled by the the SiChuan Airlines with full refund but without any explanation. Somehow the first leg of the inbound flight between Singapore and ChengDu was cancelled. So we booked our tickets again to leave a day later.

One day before departure, we went online to do web check-in. Unfortunately SiChuan Airlines website was a mess. The words on the webpages overlapped each other making them incomprehensible. Initially we thought the problem could be a Chrome browser issue so we switched to Mozilla and then to Internet Explorer, all the browsers had the same problem. We even used another computer to access the website but it was of no help! So we resigned ourselves to joining the long queue at the airport counter on the day of the flight.

The plane was a small plane with two rows of 3 seats. The flight duration was only 4.5 hours, which was not too long. Unfortunately it was a very uncomfortable trip. There was no individual seat entertainment system. The nearest overhead screen was just above my head, the seat had no leg room and the chair could not be inclined so there was no way for me to slouch backward and view the screen without awkwardly tilting my head. The next screen was so far in front that the image on the screen was not visible. Headphones were not provided so it was a “silent” movie entertainment system! I took out my handphone to view my own collection of downloaded Korean dramas but was informed by the stewardess that using mobile phone was prohibited for the entire flight trip!! She mentioned that only Ipad was allowed. Huh? I just could not comprehend her logic. 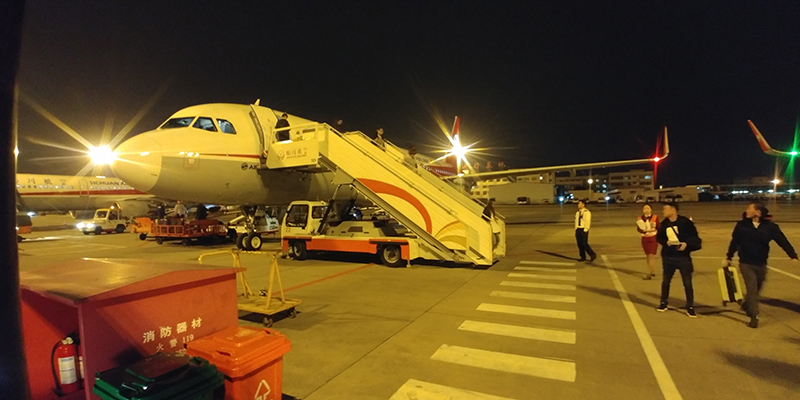 Touching down on the Tarmac of ShangLiu International Airport

Our stay for the night was at Chengdu XiangYu Business Hotel (成都翔宇大酒店贵宾楼) near the airport. The cost was RMB¥ 208 (SGD$43) for a twin room and we booked it at Booking.com. We selected it for its proximity to the airport and its 24 hr free airport transfer shuttle bus services.  Before our arrival we had emailed the hotel twice regarding our after-midnight touch down at the airport and requested for an airport transfer. Unfortunately the hotel was not into reply our email. 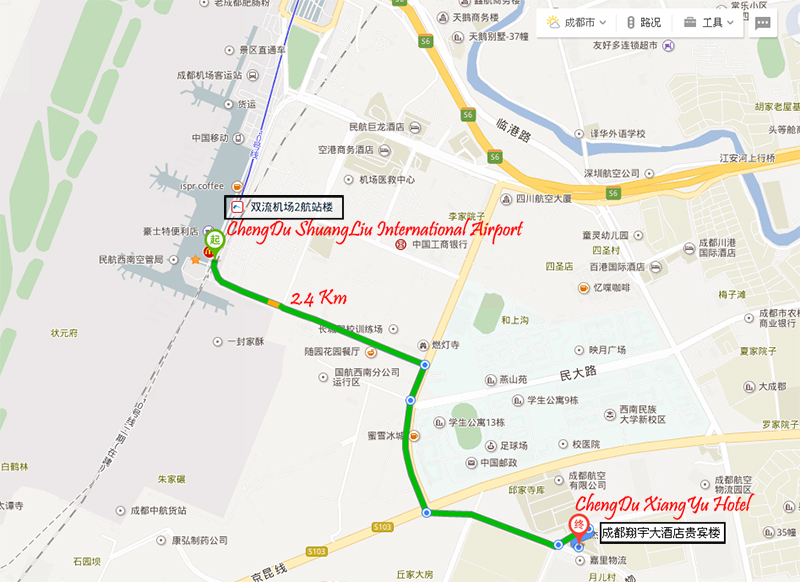 After picking our luggage and clearing custom we headed for terminal 1, floor 2, gate 5 which was one of the hotel two airport pickup points. I was just pulling out my handphone to contact the hotel for a pickup service when I saw a van bearing the hotel name about to drive away. I yelled at the young driver and told him we were going to the hotel too. He was certainly surprise to collect two additional guests.

The hotel was about 5 min drive from the airport. At the reception we paid the full amount for the room and an additional  RMB¥ 100 for deposit. We informed the receptionist of our need for a return shuttle service to the airport the next day.

Our room was large and had two beds. The beds were very comfortable. My bed had a wisp of cigarette smell which I could easily ignore. The TV remote control was not working so we got stuck at the advertising channel, anyway it was too late to watch any programme. I took a quick hot shower and was off to sleep. As I was dozing into a sleep, a couple of “big bang” from the closing and opening of main doors along the corridor woke me up. Sound proofing seemed to be an issue but luckily it was just one instance. Though the furnishing of the hotel looked slightly old overall it was okay for the price we paid. 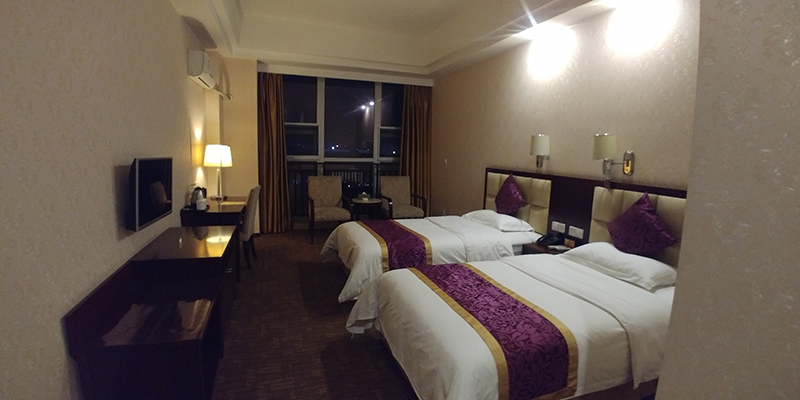 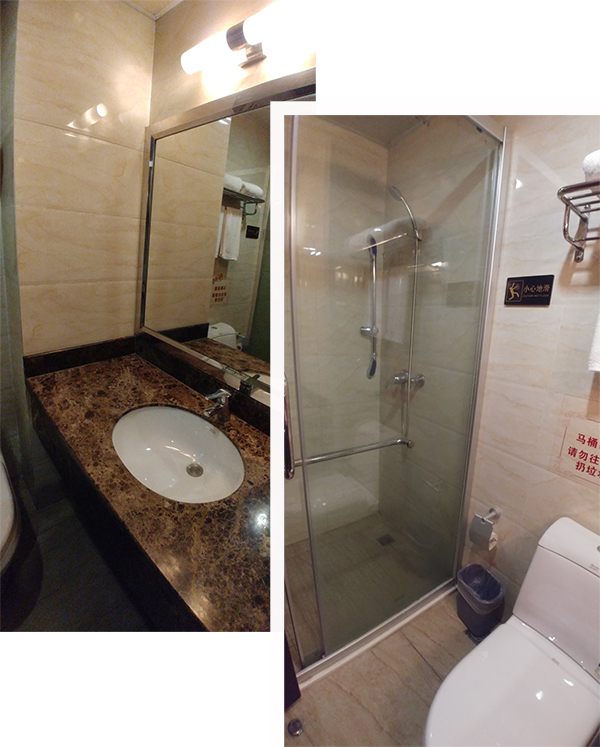