We would be flying out of ChengDu at 2 pm and touching down at JiuZhai-HuangLong Airport (九寨黄龙机场) at about 3 pm. 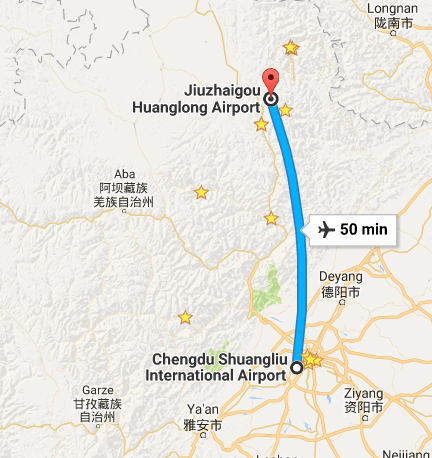 Travelling by plane would take about 50 minutes whereas travelling by bus the trip would be a long 8 hours journey.

We had considered two options, the first was to fly into JiuZhai-HuangLong Airport and travel southward sightseeing all the way to ChengDu. The second option was to began our sightseeing starting from ChengDu moving northward until HuangLong before flying out.

We decided to go for the first option which was travelling southward in the same direction of autumn color changes. If we traveled northward we might be too early to see the autumn color at some places.

From the airport it would be a one hour bus trip to SeErCuuo International Hotel (瑟尔嵯国际大酒店) which was next to HuangLong Scenic Park (黄龙风景区). By the time we reached the hotel it would too late to embark on any sightseeing event, so it would be just checking in and resting.

By the end of the day
The day ended as planned, nothing exciting, no spectacular sights just a day of eating, waiting and sitting in various transportation vehicles.

XiangYu Business Hotel was a huge two-block building. On the ground floor, on the left and right sides of the main door were shops out of which a few were restaurants. The neighbouring blocks were industrial-like buildings which ruled out possibility of any eateries in them. 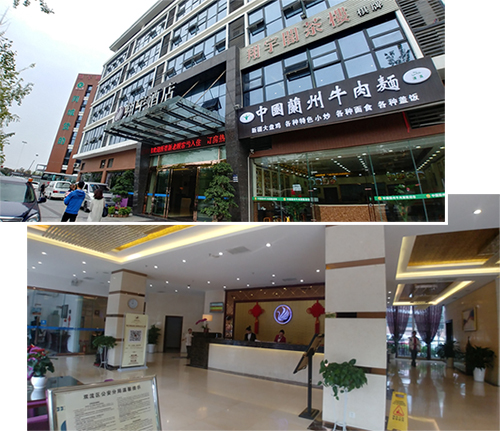 We settled into a dusty restaurant on the left side of hotel to have our breakfast. We ordered two bowls of pork rib noodle at RMB¥8 each. Each bowl had only two pieces of small bones (ribs?) tangled among long noodles soaked in what looked like chillies oil soup. We would love to have more meat and less noodle and a spoon to drink the soup. There were no soup spoon in the restaurant so we had to raise the bowl to our mouths and slurp the soup. 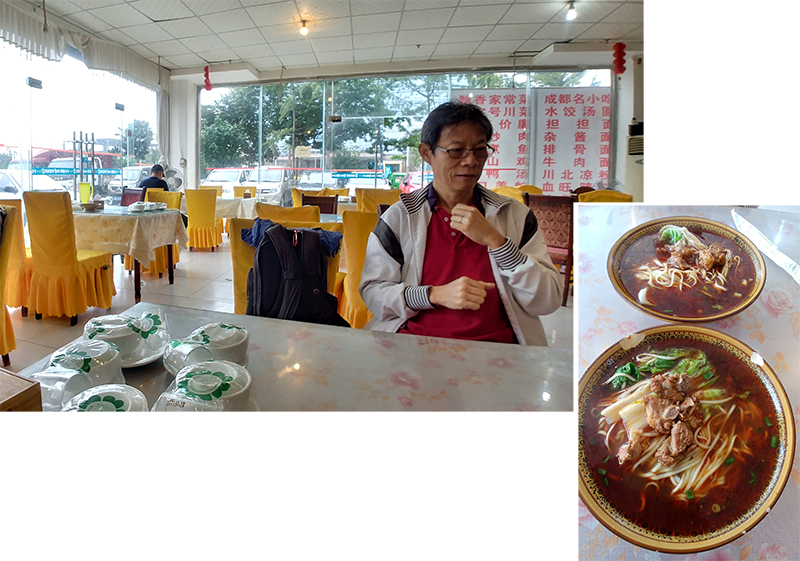 Our flight was in the afternoon, so we had the whole morning to explore the vicinity of XiangYu Business Hotel. Unfortunately there was just no places to go. All around the hotel were dull industrial buildings, there was no parks or malls in sight. With nothing interesting we could only stay in our room till it was time to go to the airport. 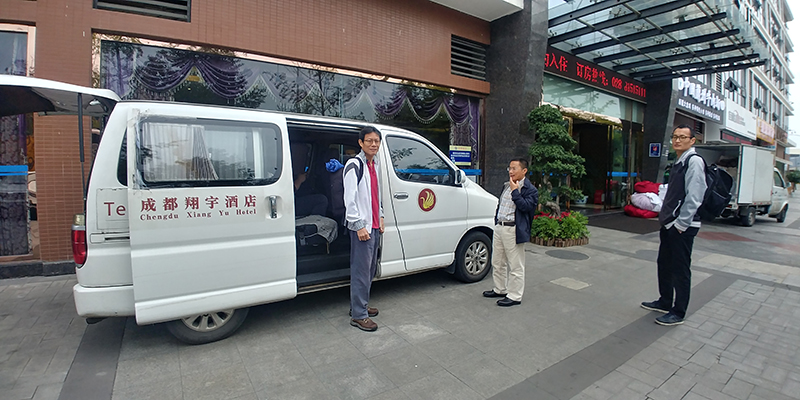 Though it was a domestic flight, the security checks was pretty strict. We had to pass several layers of security checks which again left us with very little time to relax at an airport lounge before our flight. 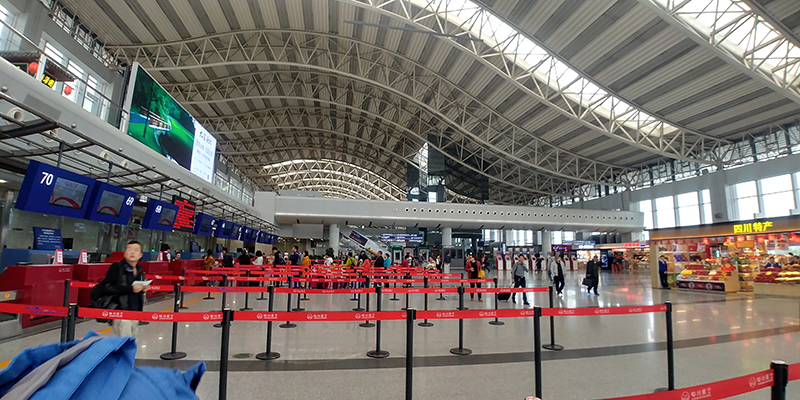 At the airport “First Class Lounge” was the only lounge that accepted our Priority Passes. The lounge had a nice name unfortunately it definitely did not live up to its grand name. We were searching for it and yet we walked past it without noticing it. It was so inconspicuous! 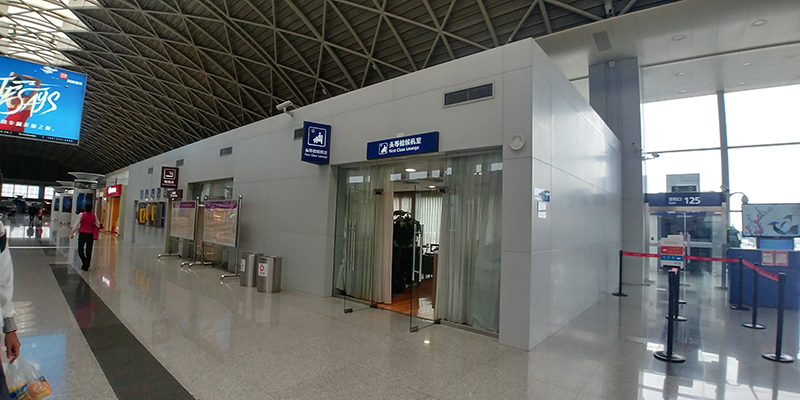 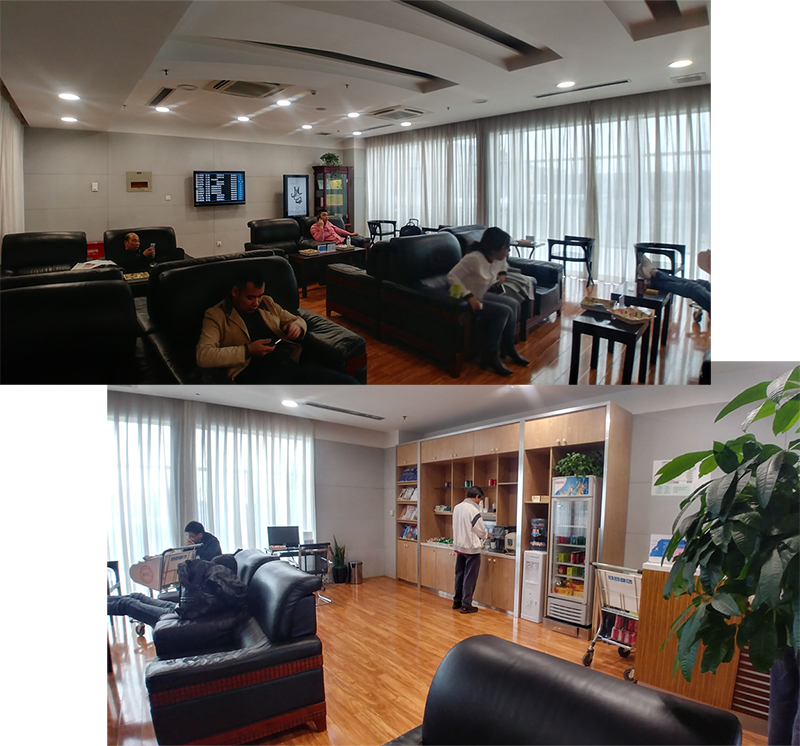 Flight from Chengdu to JiuZhai-HuangLong Airport

This second leg of our inbound flight was on a newer and more spacious plane which was definitely more comfortable than our flight (leg 1) from Singapore to Chengdu. We touched down at JiuZhai-HuangLong Airport at 3 pm. It was a small airport and picking up our luggage was very smooth and easy.

In the airport we could not see any counter for bus services so we walked out of the main door in search of buses that would take us to HuangLong. Well there was none! I checked with an airport security staff and was told that there was no bus services. I remembered reading on the internet that the buses would time their arrival at the airport to sync with the arrival of a plane. Unfortunately this was not the case. It could be that since the earthquake at the nearby JiuZhaiGou two months ago, tourists arrival had dropped drastically at this airport so the bus services also disappeared. 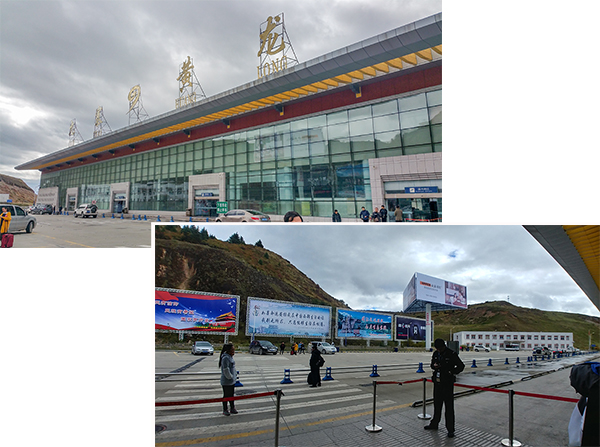 No Bus services at HuangLong-JiuZhaiGou airport! 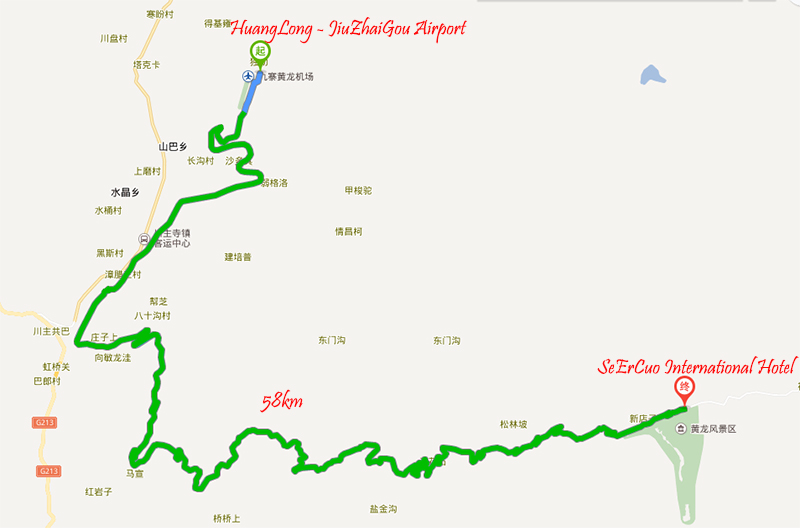 The drive from the airport to SeErCuo International Hotel took about an hour. It could have been shorter and faster if not for the closure of a tunnel. The road was in very good condition, well tarred, winding up the mountain and down. On the journey we saw many long black hair cows/bulls and sheep wandering on the road. 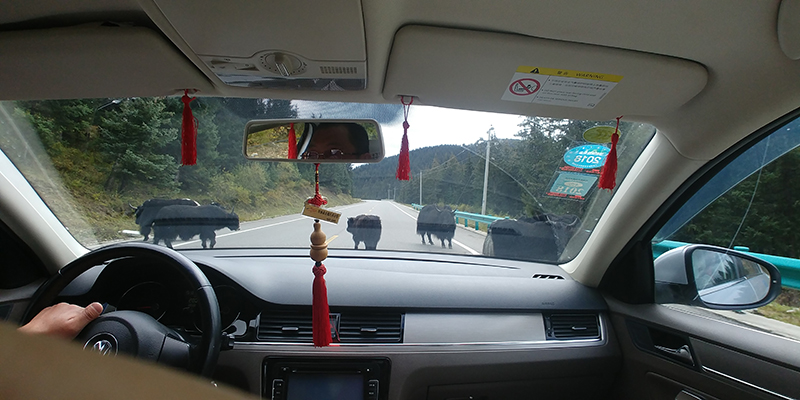 As we crossed the highest point of our journey the mist got very  thick and heavy and we could see only a couple of feet ahead. Along the way there were some stores at the sides of the road, but all were closed and not a person in sight. The entire journey felt a bit eerie as we seemed to be the only tourists about. 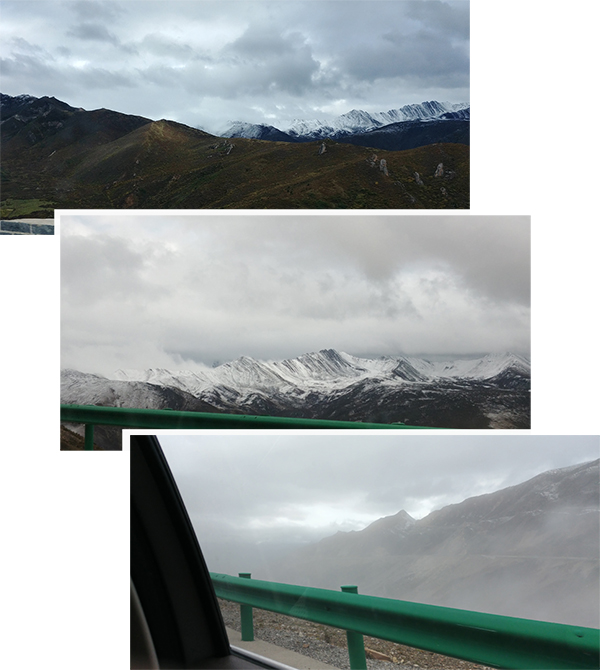 Mr Pi was a very careful driver, he drove on steadily and slowed down whenever there was a road bend. Though there were many curves we did not develop motion sickness at all.

Driver Pi drove us right to the doorstep of our hotel and left without collecting the fare for this trip, he told us to pay him after after the final trip.

SeErCuo International Hotel was a grand hotel. We walked through a huge revolving main door and came into a huge lobby with many comfortable sofa seats at one side, a huge circular reception counter in the center and a huge stair further in. At the reception while checking in we were served hot local Chinese tea. 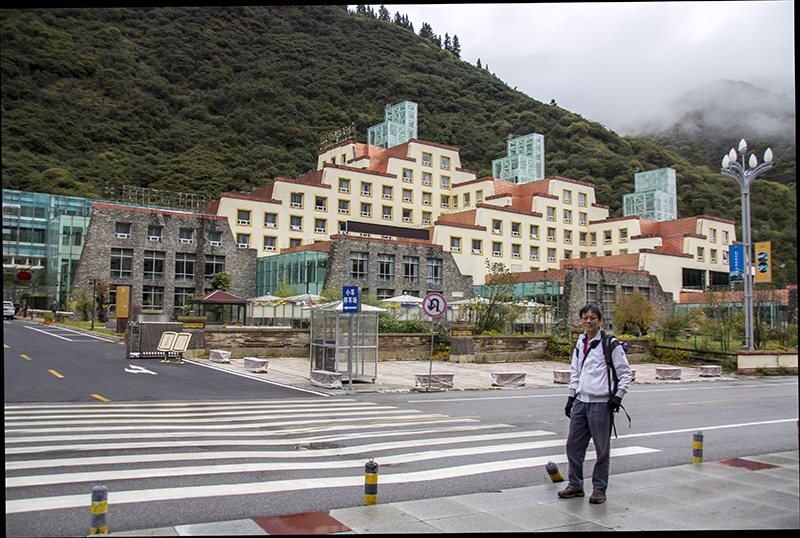 SeErCuo International Hotel was nearest international hotel to Huanglong Scenic National Park which was the reason I booked a room at this hotel. The rate was RMB ¥936  (SGD$200) for two nights with breakfast included. I had initially booked the room (without breakfast) at Agoda.com but on checking with Ctrip.com I found the room price much lower and it also included breakfast.

My first booking of this hotel on Ctrip.com was unsuccessful. I placed the booking and the webpage showed the status “processing” then I got a call from a Ctrip staff the next day informing me that there was no room available. A few days later, I found that rooms were still offered at Ctrip, so I placed another booking. This time the booking was confirmed the next day and I went on to cancel my booking at Agoda.com 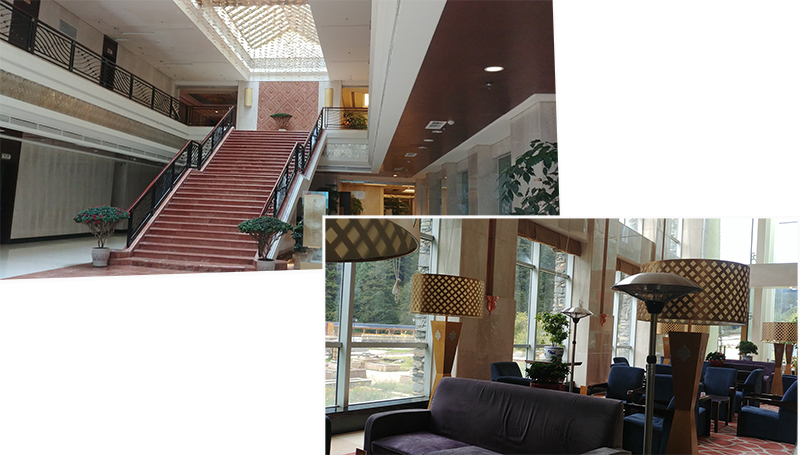 Dinner at Chinese restaurant at the Hotel

We ate our dinner at a Chinese restaurant in our hotel.  When we walked into the restaurant we were the only customers. Where were the other hotel guests, had they had their dinner already or would they be coming in later? 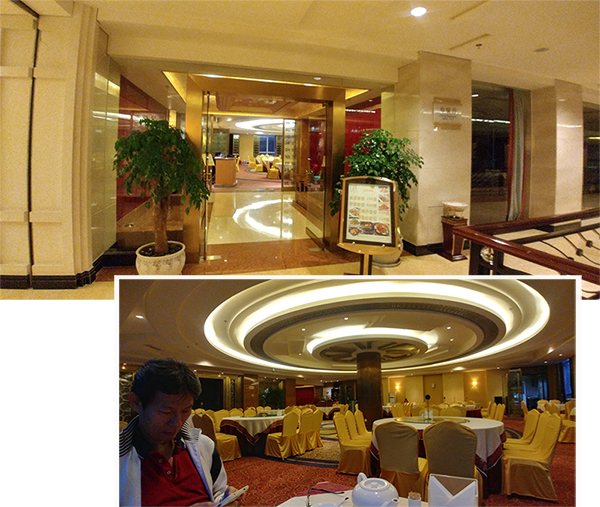 We ordered a set meal consisting of 4 dishes and 1 soup for two persons and it costed RMB¥198. Pricey by Chinese standard but okay for us. It was probably a lure period now and we had the whole Chinese restaurant to ourselves for the entire meal! 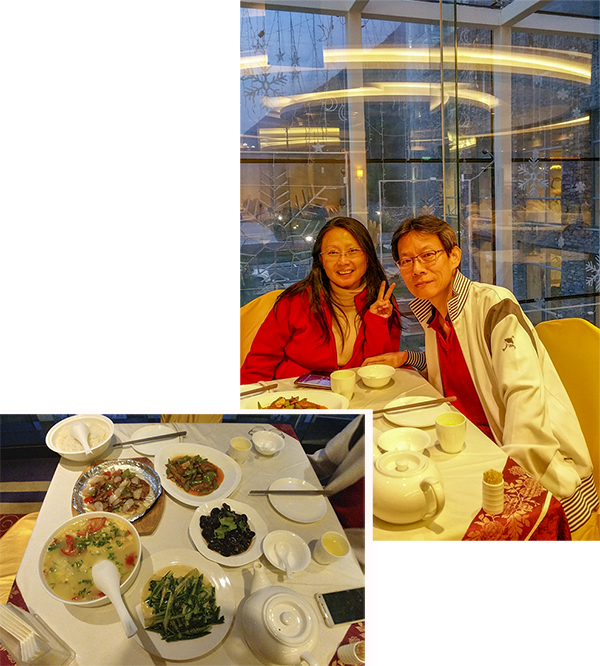 Our Accomodation for the night

Our room was nice. Large, comfortable and clean. The ensuite bathroom had a shower and a bathtub. I could already imagine myself soaking in hot water especially in such cold weather environment. 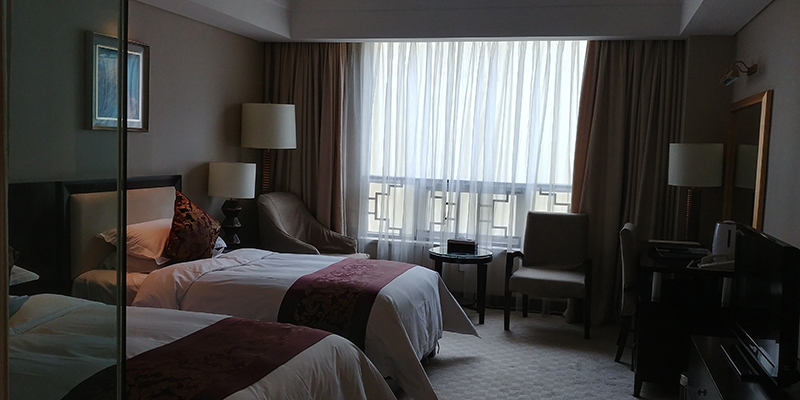 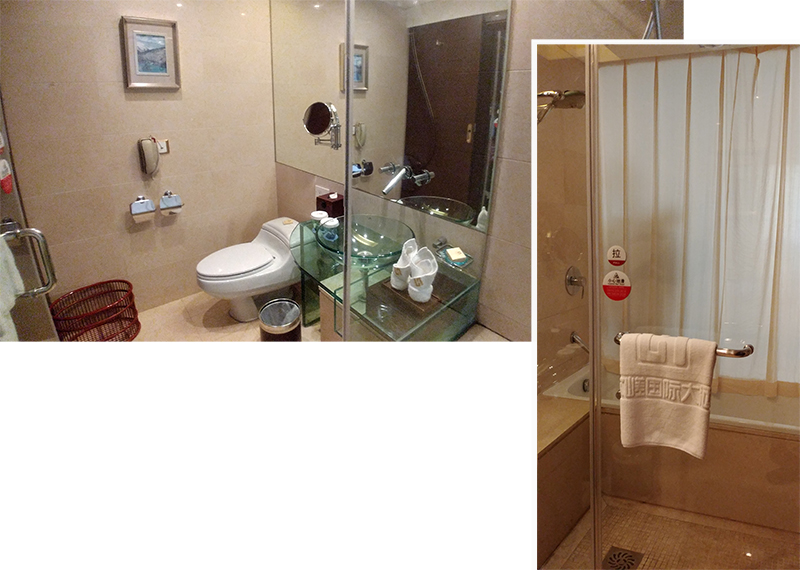 4 thoughts on “Day 1: ChengDu to HuangLong”