We planned to spend the entire day exploring HuangLong Scenic Reserve. How long would be required, we were not too sure. Anyway we gave ourselves from 9pm to 5pm. 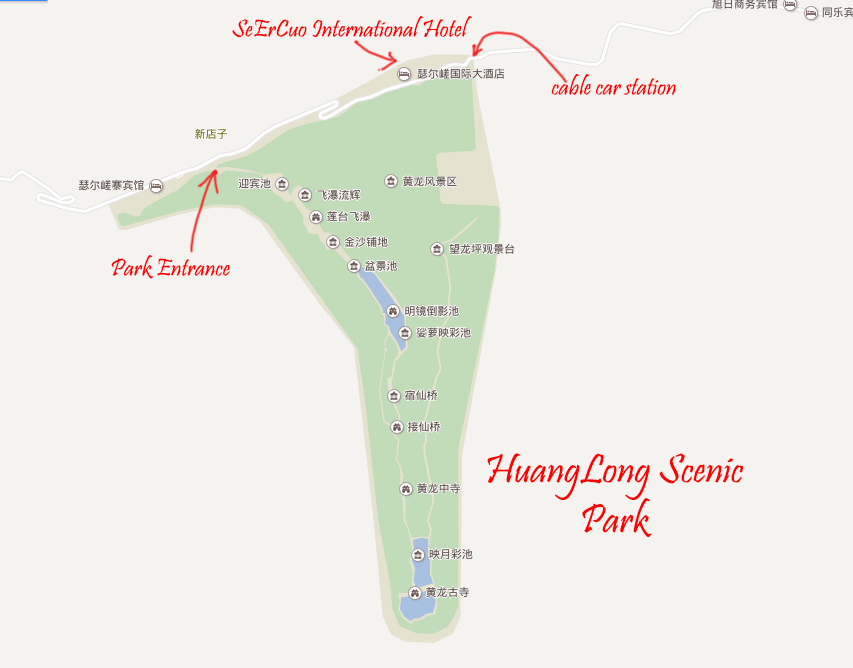 At the end of the day
We started at 9 am and finished our exploration by 4 pm. We started with a cable car ride to somewhere near the top of the mountain and then made our way to the top before trekking downhill for about 4-5 km  to the park entrance. On the way down we met a group  of American Chinese tourists, they began their exploration starting from the main entrance and trekked uphill but it was a long way up to the top. They gave up midway so they did not manage to see the magnificent Five-Colored Lake located at the top.

We ate our breakfast in the same dining room where we had our dinner the night before. Again like the evening before, there were no other guest in the restaurant but us. We were beginning to suspect that we were the only guests in this huge hotel! So far the only people we had met were hotel staff.

For breakfast, we were served three plates of different vegetable and only one of these three dishes had some slices of pork pieces in it. Drink options were diluted sweeten coffee or sweeten milk so we opted for two glasses of plain water.There were two hard boiled eggs, two slices of bread, two plain buns, small cubes of fruits and some sorts of cake. All these were to go with watery porridge. Breakfast was part of the room package, it was a very simple affair. 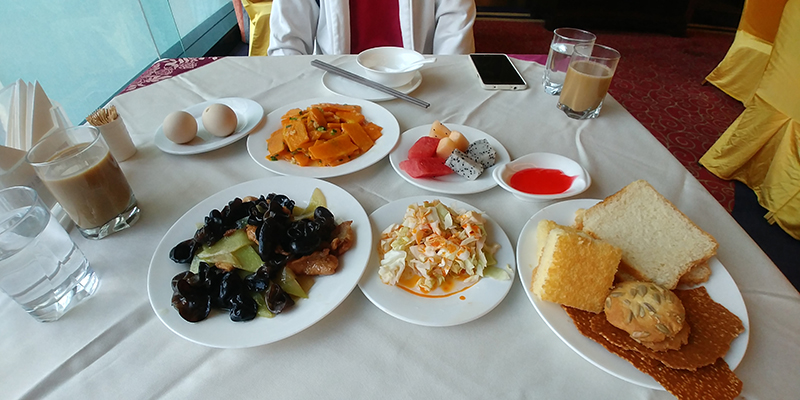 One of my friends who visited HuangLong many years ago told me that she felt like she was dying by the time she trekked up to the top of HuangLong scenic reserve. So I knew there was no way we were going to trek up HuangLong from the main entrance. The cable car station was about 2 km down the road from the main entrance which coincidentally was 200 m from our hotel.

From our hotel on the opposite of the road was a sheltered wooden path that led us all the way to the Ticket Office, a peach colored two storey building. It was a short 5 minute walk. 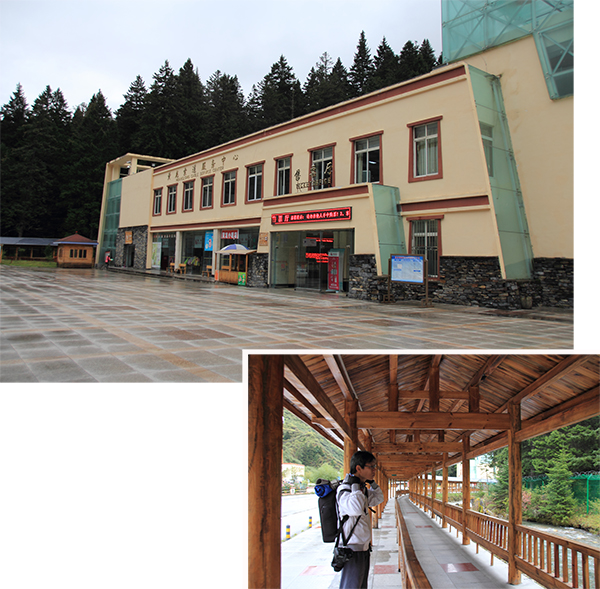 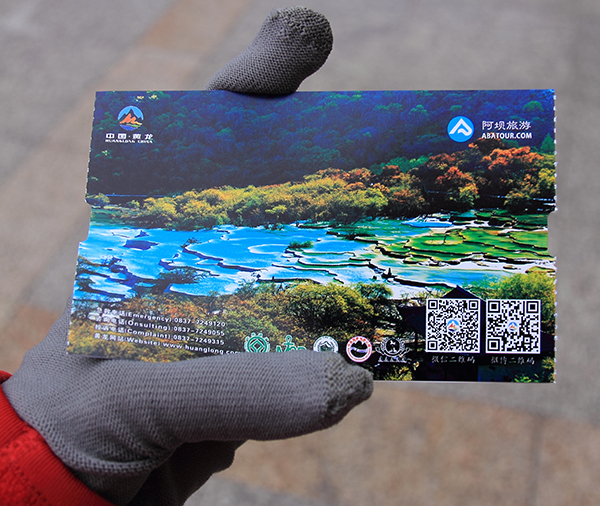 From the Ticket Office we walked to another building which housed the lower cable car station. It was a short ride on the cable car and as we got higher the atmosphere turned misty and the air became colder. More and more snow came into our sight, the branches of the trees were covered with snow. Apparently it snowed the night before or early in the morning. 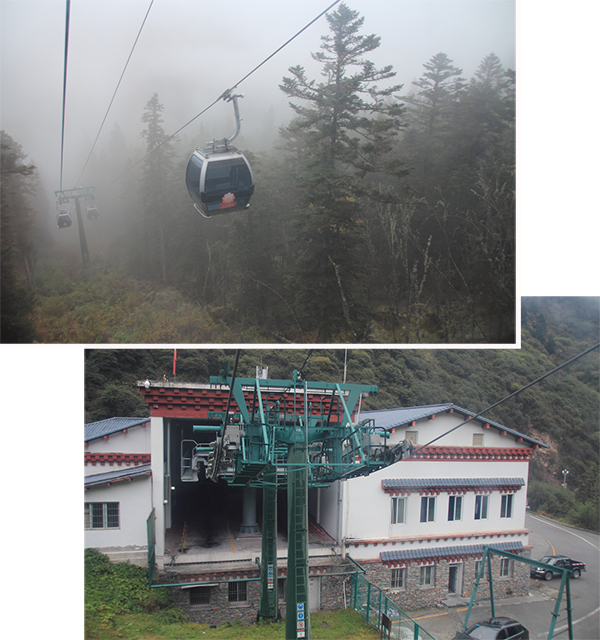 At the upper cable car station there was a boardwalk leading to somewhere. Unfortunately there was no directional sign telling us where would the boardwalk lead to and what would be the distance . Anyway there was only one walking trail so we could not be on a wrong route. We presumed that this boardwalk would bring us to the summit. Interestingly there were more walking down the steps than up. 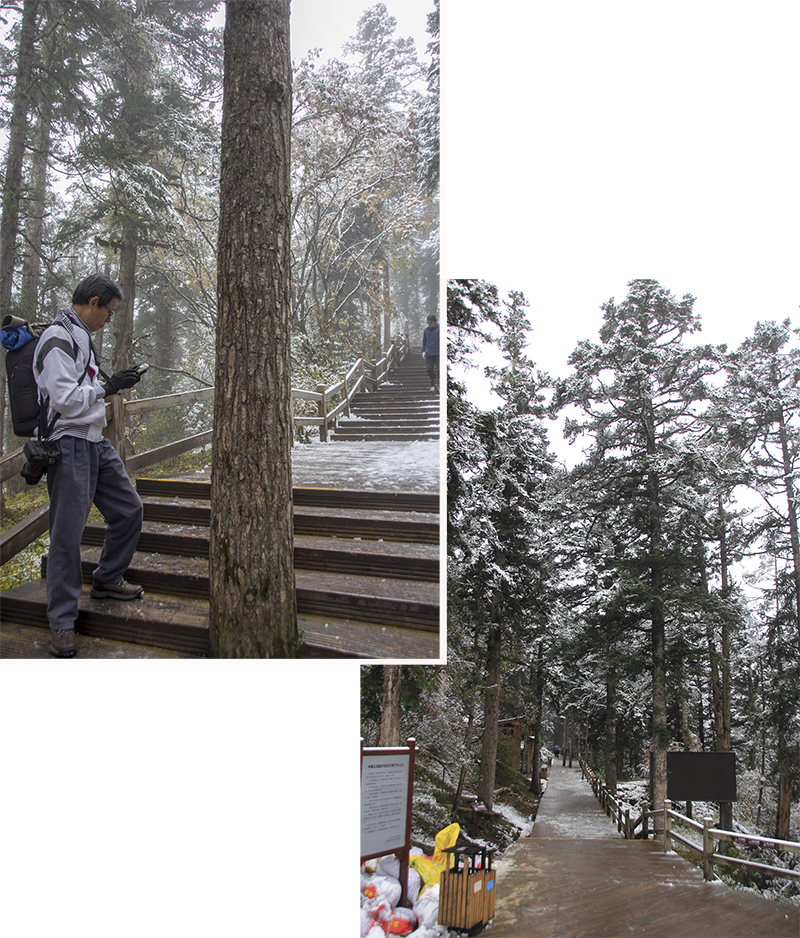 Boardwalk from Cable Car Upper Station to the summit

It was a walk with no green/blue lakes in sight. At interval we saw park-staff clearing the snow on the boardwalk. Along the way there were well built toilets, resting huts for workers, oxygen bar for tourists. The walking path was relatively flat with occasional up and down steps. After about 400 m we reached a large viewing deck. It was a “sea” of tall trees in front. The sky was misty so the scene was blurry, definitely no blue sky or autumn color. 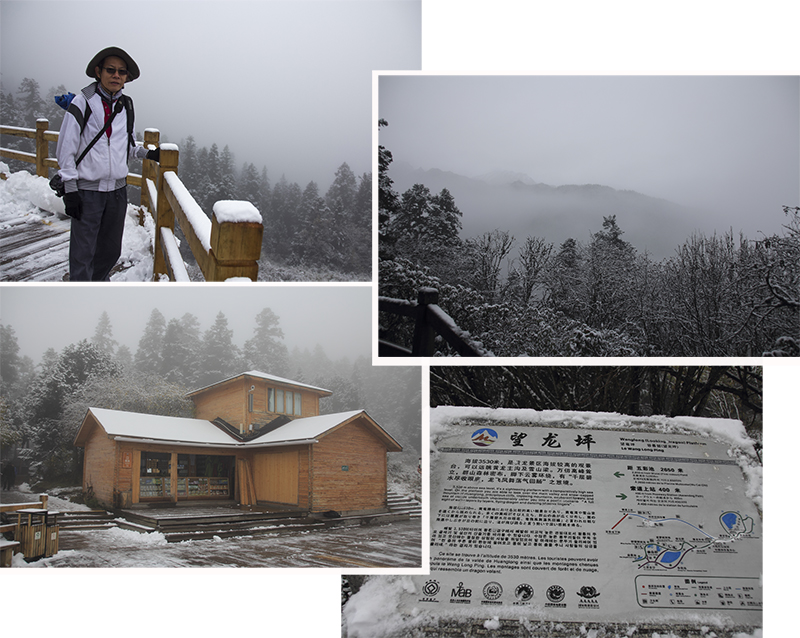 A signboard told us that we were 3530 m above sea level and we still had to walk about 2.65 km to a certain Five-Colored Lakes (Multi-Colour Lakes). Feeling slightly disappointed we continued our walk on the boardwalk. After about an hour  or 2 km later we reached a beautiful temple. This was the HuangLong Back Temple. It was a 600 year old Taoist temple. 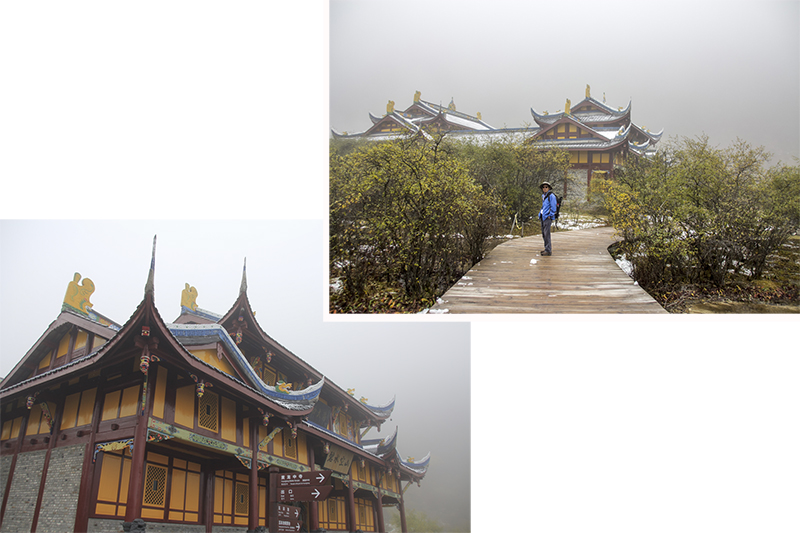 Temple near the summit of HuangLong Scenic Reserve

For a 600 hundred year old building the HuangLong Back Temple/HuangLong Ancient Temple 黃龍古寺 looked pretty well maintained. In fact it looked freshly painted. We took a quick peek into the main door of the temple and saw incense urns in its courtyard. No monks or temple patrons in sight. 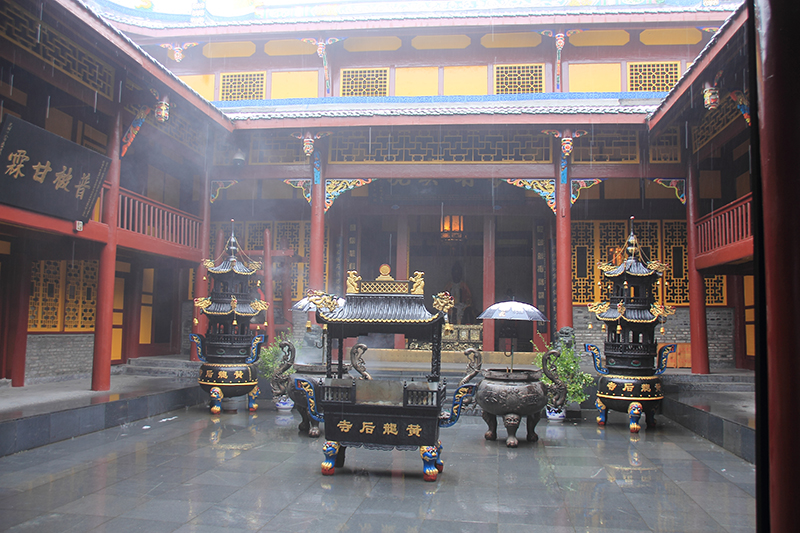 The boardwalk continued past the temple and then it branched. One branch indicated a 450 m uphill walk which would bring us to the Five-Color Lakes. The other direction would bring us downhill. Though it was only 450 metres it took us a long time to reach the lake. At this high altitude, the air was pretty thin so we consciously walked slowly and took plentiful of rest to prevent our bodies from tiring out. Finally we reached the Five-Colored Lakes 五彩池, it was beautiful.The water in the multi layered pools was blue, green and turquoise.

This was the lake that was printed on the front of the entrance Ticket! Though the coloring of the scene was not as intense as that shown on the ticket it was still a sight to behold.

The boardwalk took us to a huge viewing deck that practically sat on top of the lakes. It was amazing to have the entire place to ourselves. We had seen pictures of this deck squeezed pack with hundred of tourists and was only too glad that we were here during a lure period. The beauty of the place was definitely enhanced by the serenity of the environment.

I had the Five-Colored Lake to myself

After the viewing deck, the boardwalk went uphill and we could see that it would take us to more viewing decks on the higher ground.  We were feeling tired and the thought of going up more steps was very unappealing but it seemed such a waste not to continue, considering that we had made it so far, so we persisted on. The “top” scenery was well worth our efforts as at different heights the scenes and the colors of the Five-color Lakes varied and as the sun came out from behind the thick clouds the bluish hue of the water deepened. A lovely paradise. 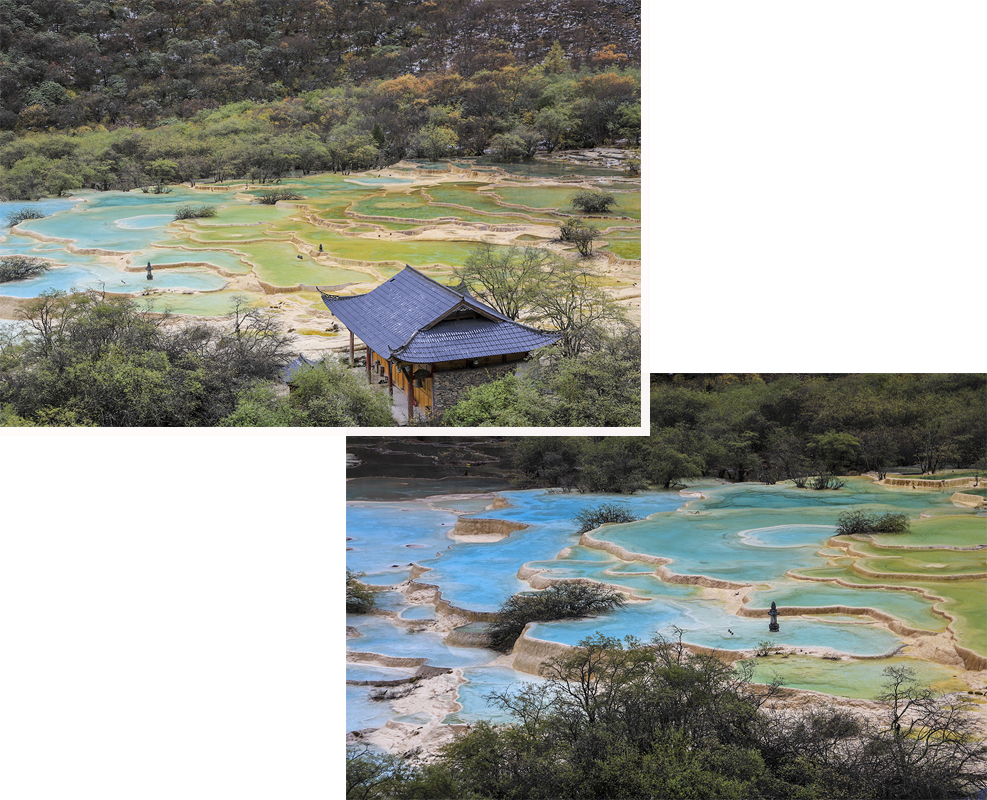 The boardwalk looped us back to HuangLong Back Temple. A the branch rather than to take the route that would bring us back to the cable car station we took the other route with a sign “scenic path” and began our trek downhill. 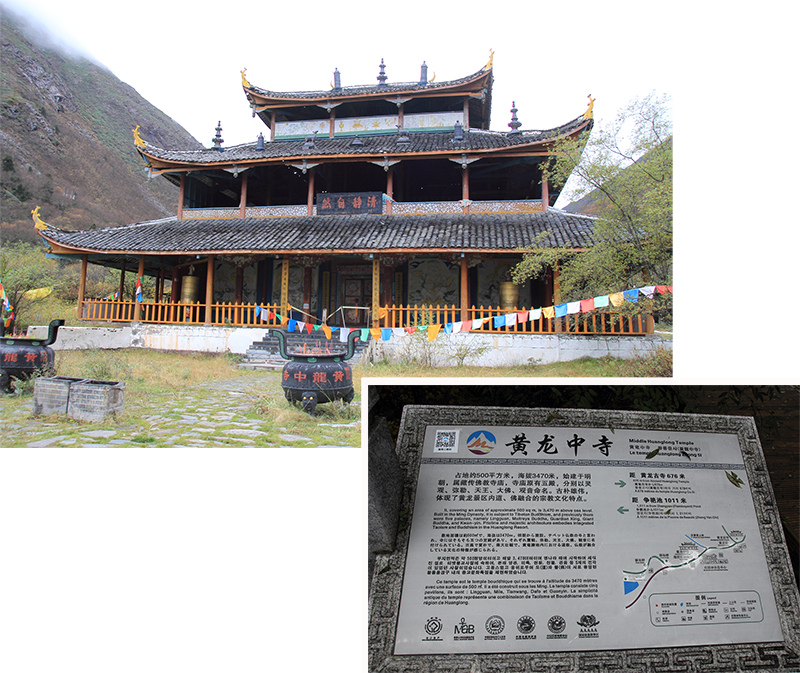 The middle temple did not looked as well maintained as the back temple. It looked a bit rundown and deserted. After the temple was more steps downhill. We walked from one falls to another, one lake to another lake. Every lake had a name and so did every fall. The landscape changed from blue to golden to blue to green etc etc. 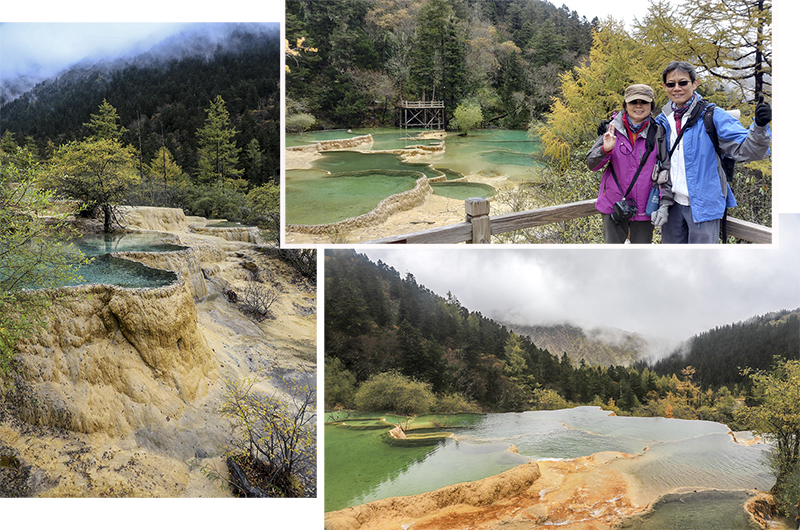 HuangLong was declared a World Heritage Site by UNESCO in 1992. Its travertine landscape and pools were the result of thousands of years of geological evolution. An evolution made possible by certain right conditions in place to produce such an unique landscape! 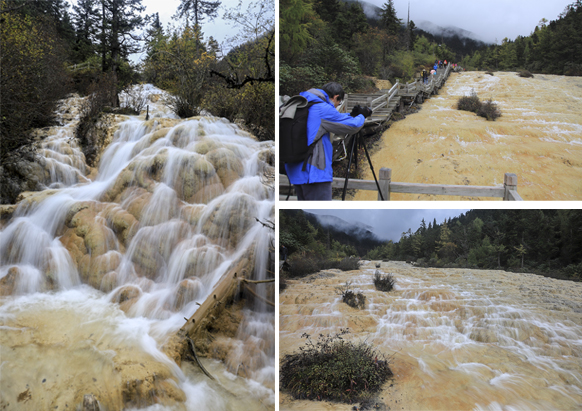 While we were walking downhill we saw many tired visitors struggling to go uphill. Many did not make it to the Five Colored Lakes which in our opinion was the highlight of HuangLong Scenic reserve.  Unfortunately many visitors were not aware that there was a cable car option which would bring them nearer to the summit of the reserve. 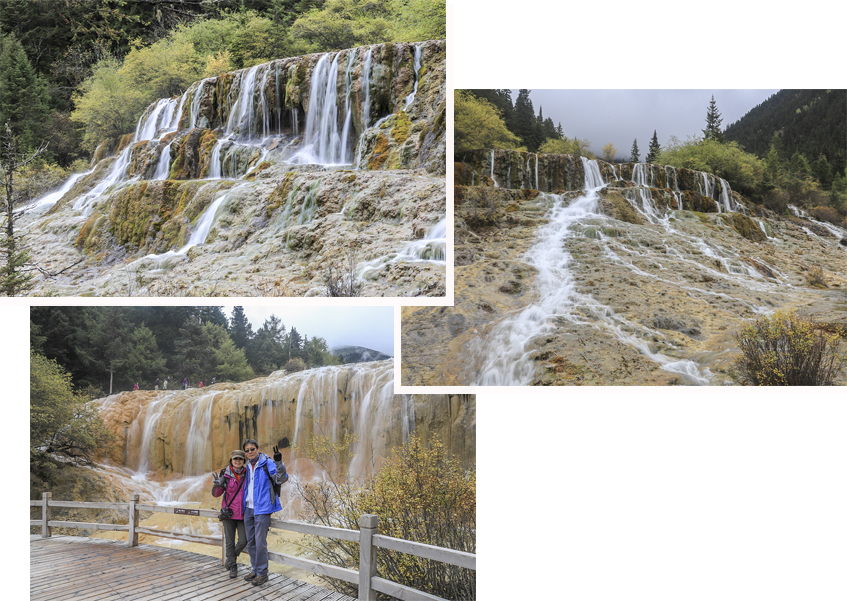 Falls and Falls and more Falls 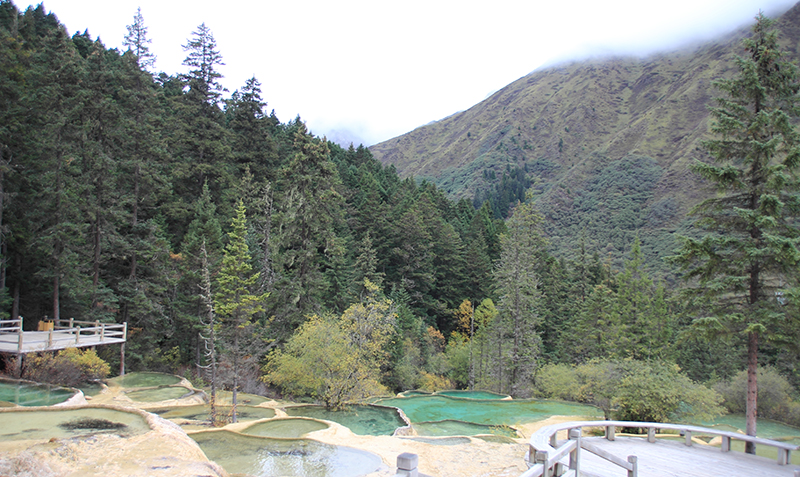 Near the main entrance we saw the HuangLong Scenic Reserve Map. The shape of HuangLong Valley was supposed to resemble a “Dragon” which accounted for the name HuangLong (Yellow Dragon). Well I guessed if I “stared” at the map long enough I could visualise a Chinese dragon, hehehe…” 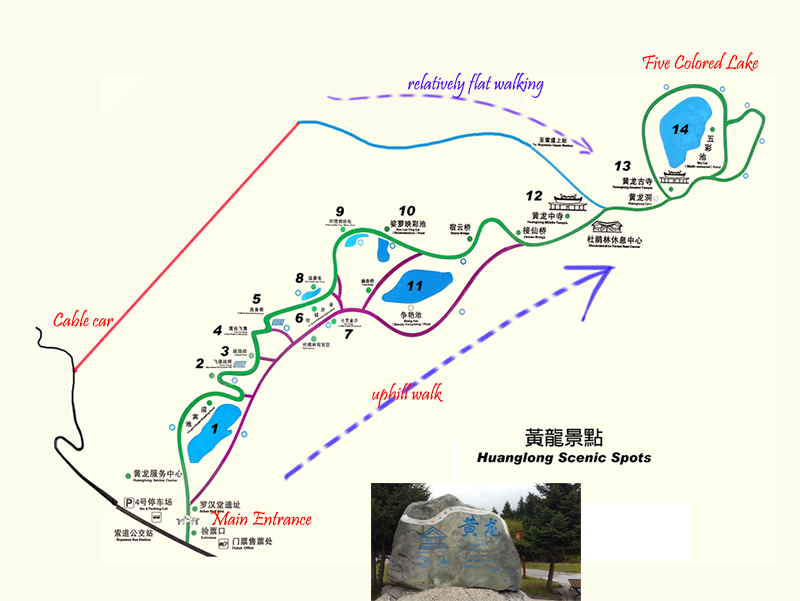 Unfortunately the last bus left at 4 pm and we had just missed it. So we took a “cab” ride for RMB¥10 from a man and his car (not a taxis) loitering around the main entrance looking for a quick buck. The man initially asked for RMB¥20 but we bargained it down to RMB¥10 as our hotel was just 2 km down the road and the ride should cost no more than RMB¥5 if it was a actual cab running on meter. 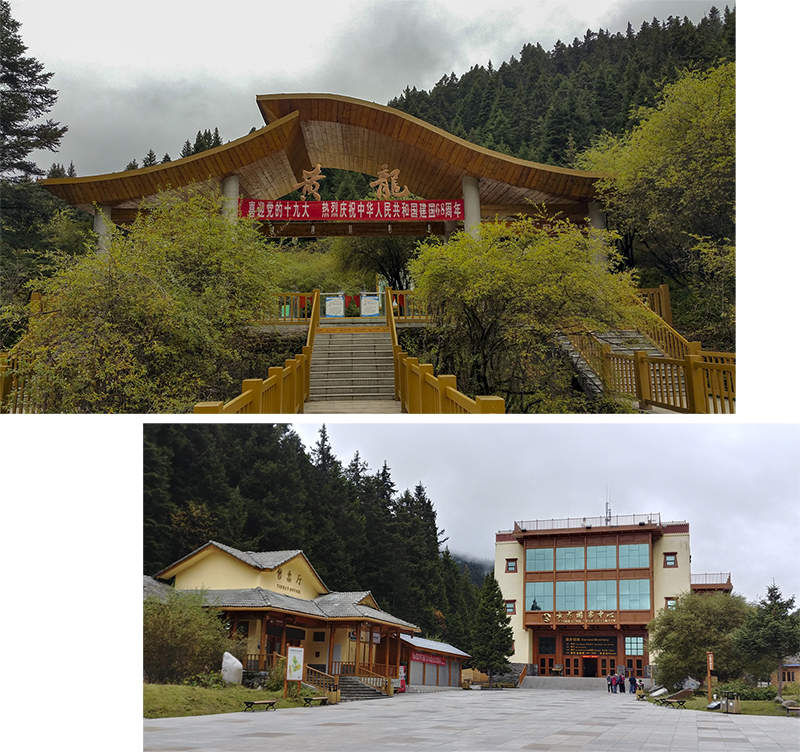 We were back at SeErCuo Chinese restaurant for our second dinner. This time instead of having the set dinner, we ordered three dishes and rice. The dishes were  tomato omelette, pork and xiao bai chai (green vegetable). The pork dish was a disappointment as it had more capsicum than pork. Dinner costed RMB¥140. 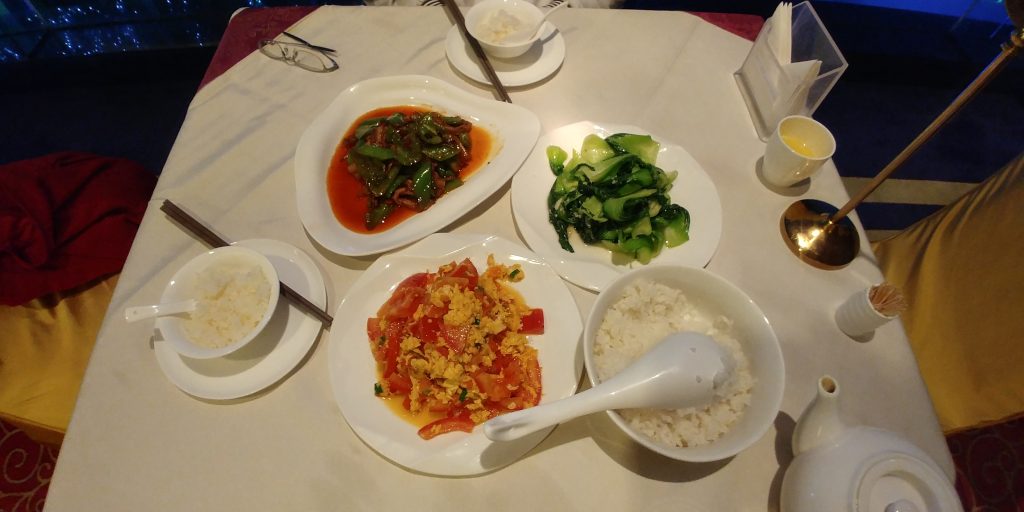 Near the end of our trekking down from HuangLong I started developing a headache so back in our hotel room, I  put the bath tub in our ensuite bathroom to good use. A hot soak for my cold aching body was very comforting and my headache lightened though it did not totally disappeared.

That night was a pretty awful night. I was unable to fall asleep at all. It was pretty lousy lying in a comfortable and warm bed, feeling tired and lethargic and yet kept drifting awake all the time. My only consolation was that the next day would be a very relaxing day.

It was after checking up on the internet the next day that I realised my headache and insomia could be due to High Altitude sickness!