Our plan was to have a relaxing day. We knew our HuangLong trek the day before would tired us and we would need a break before the next trekking. So today would be a “transfer day” – “transfer from HuangLong to SongPan Ancient Town”, then to relax in our hotel in SongPan and walk around the ancient town if we had the energy. 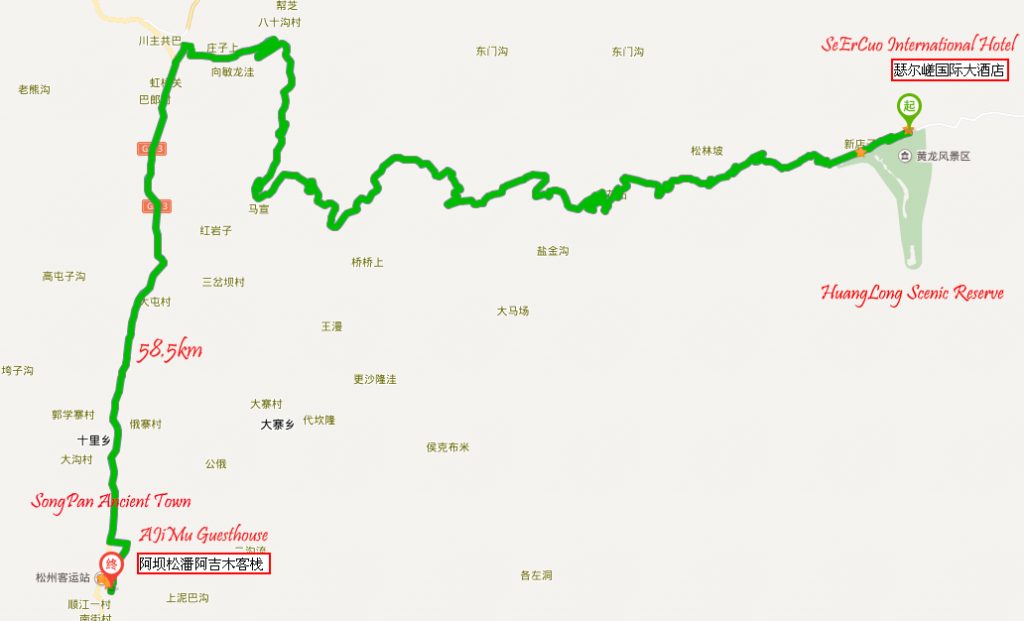 By the end of the day
The day was cold and gloomy and I was also feeling cold and down. I woke up with a sore throat and stuffy nose. I must have caught a chill when trekking in HuangLong Scenic Reserve coupled with not drinking enough water.

We left SeErCuo International Hotel at about 11 am and reached SongPan Ancient town two hours later. After a good rest we were energised enough to explore the ancient town which was more beautiful than our expectations.

The 2nd breakfast was similar to the first breakfast we had the day before. This time round every dish seemed so unappetising and so tasteless. I  left most of the food untouched. We were only too glad that we would not be having a 3rd breakfast here! 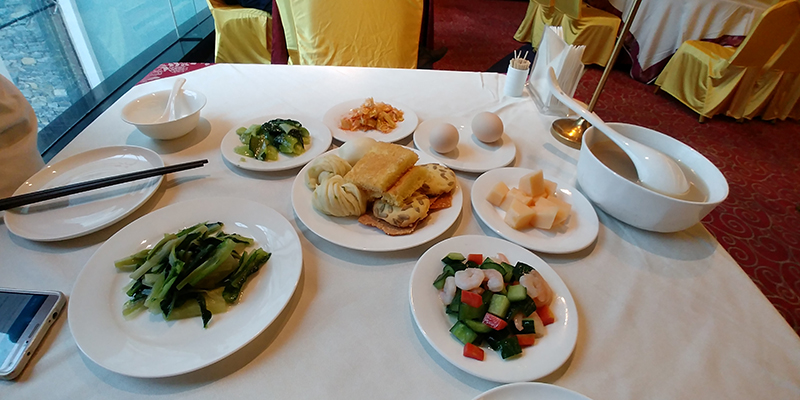 Transfer from Huanglong to Songpan

I WeChat with our driver, Mr. Pi the night before to remind him to pick us up. Driver Pi arrived early before the 11 am we had agreed. Like the day we came, our car was the only vehicle on the road. The whole place was very misty and there was more snow on the slopes by the sides of the road than on the day we came. 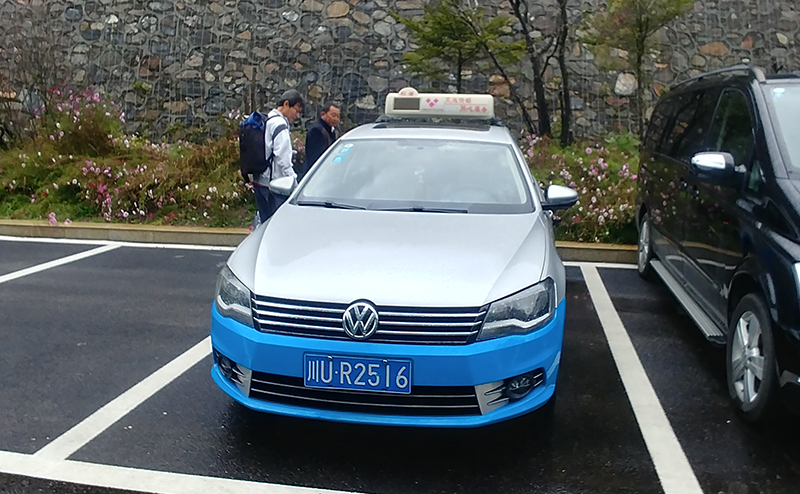 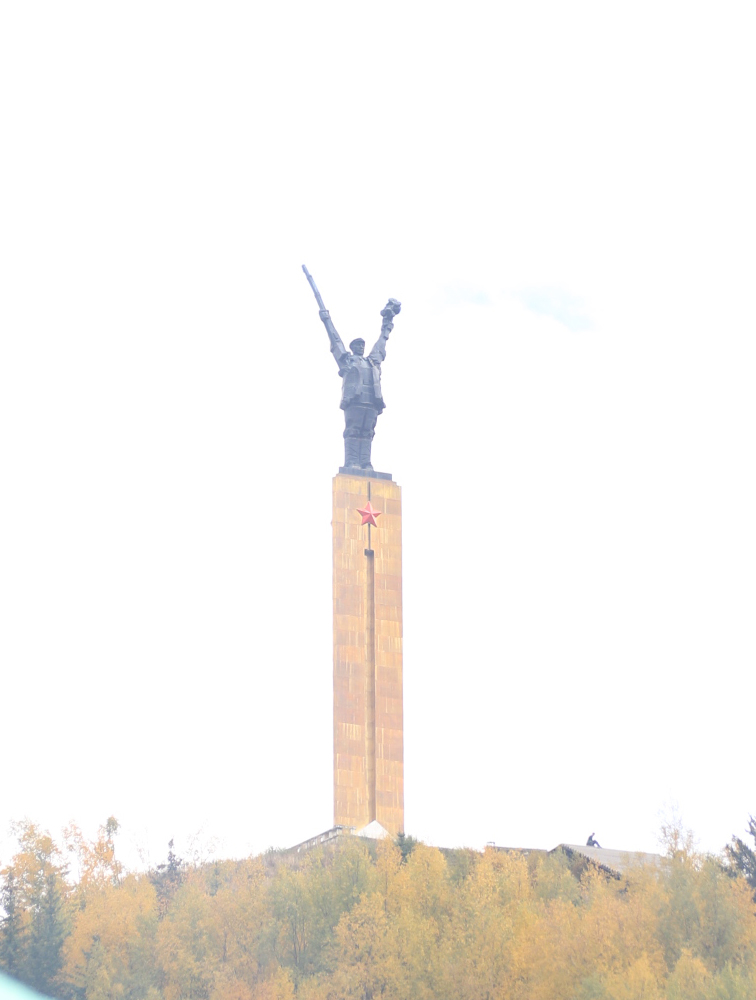 Memorial Statue of the Red Army

Mr Pi was a cautious driver, he navigated his car carefully around the many bends. Though I was not feeling well his smooth driving allowed me to lie back and relax.

On the way we passed ChuanZhuZi (川主寺镇) town. This was the 2nd time we drove by this town, the first time on the way to HuangLong and now on our way to SongPan Ancient Town (松州古城). Mr Pi pointed out the Memorial Statue of the Red Army that stood on a high point in the town.

The statue was erected to commemorate the crossing of the Red Army at ChuanZhuSi during the communist revolution. We passed ChuanZhuSi without stopping to visit its “Long March Monument Tablet Park”.

At about 1 pm we arrived at SongPan Ancient town. Our car drove under a red arch doorway spanning over the main road that led into town. Though it was an ancient town the rows of two-storey buildings on both sides of the main road looked relatively new and orderly. 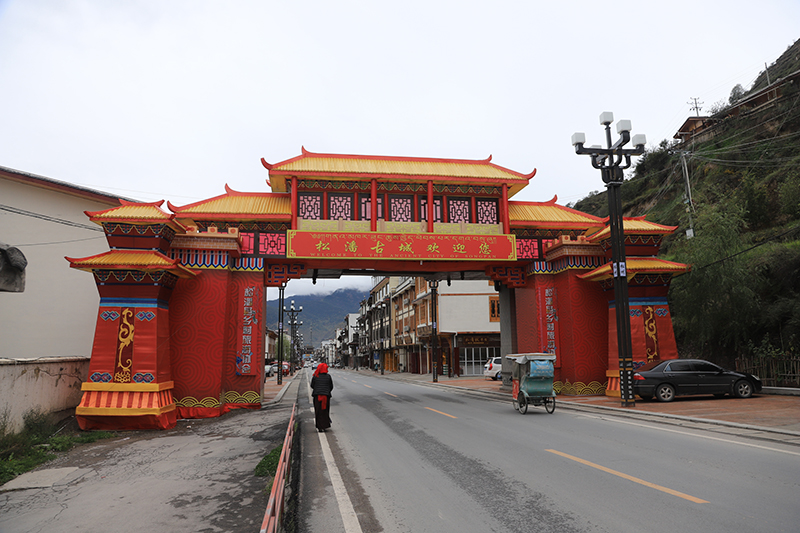 Mr Pi turned into a back lane and drove to a “Ajimu Guest House Parking Lot”. From there we had to walk and drag our luggage an a dirt path beside a murky stream for 100 metres before we could reach Ajimu Guest House. I knew that Ajimu Guesthouse was not on the main road, but I did not expect the uneven/messy dirt path that I had to trek to reach the guesthouse!

Our first destination was SongPan Bus Station (Song Chuo Bus Terminal 松州客运站) which was about 300 metres from our hotel. We imagined that the bus station would be a small little structure in a big space parked with buses. We definitely did not expect it to be a large three-storied building. The buses were parked in the bus bay behind the building and to board the buses passengers would need to walk through a security gate in the building. The security gate was equipped with luggage x-ray machine. Wow! Such tight security practices for long distance bus travelling.

We bought our tickets to RuoErGai 若尔盖 at RMB¥ 49 per person, departing two days later. There was a 10 am trip and another at 2.30 pm and we selected the earlier one. 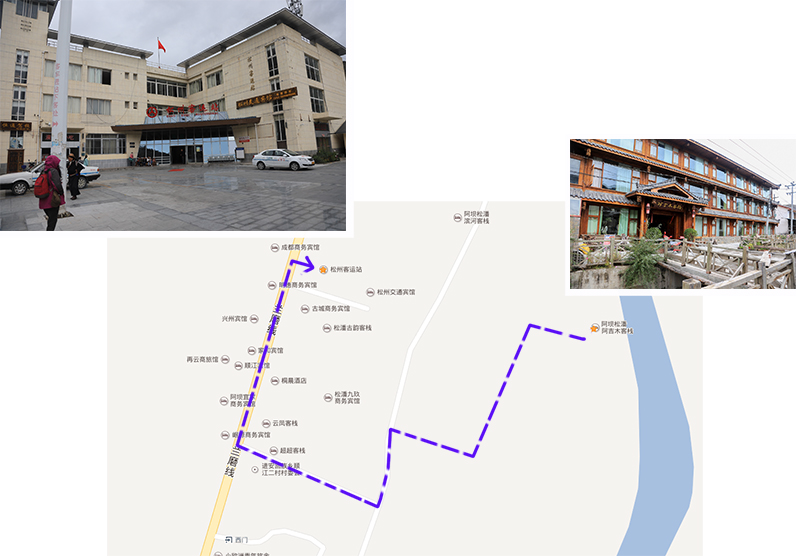 Our next destination was a place for lunch. We walked into one of the many restaurants near the bus terminal. We picked the restaurant because the interior of the shop looked brighter than the others. We ordered beef noodle after some heavy recommendation by the owner and reminded him to make it less spicy. Sadly like the pork rib noodle we had at Chengdu a few days ago, the beef noodle had only a few pieces of beef and they were very tough to chew. The cost for two bowls of beef noodle was RMB¥24. Tea was provided free. 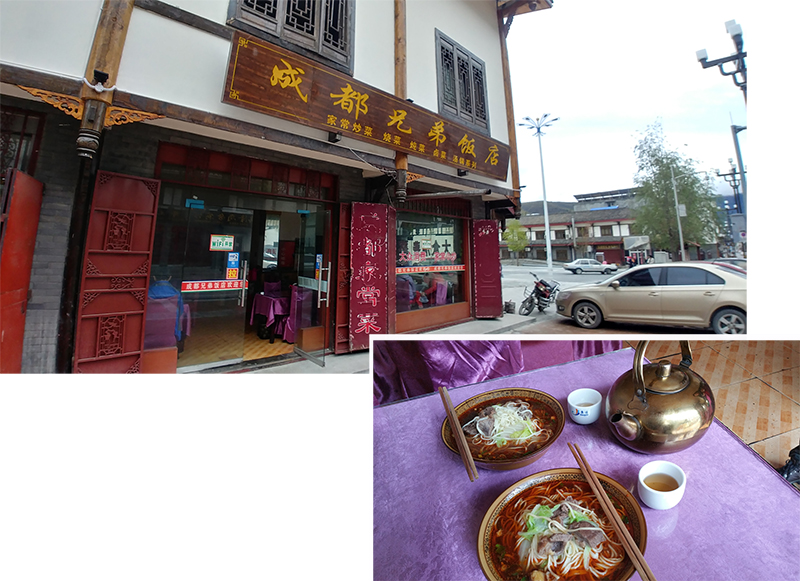 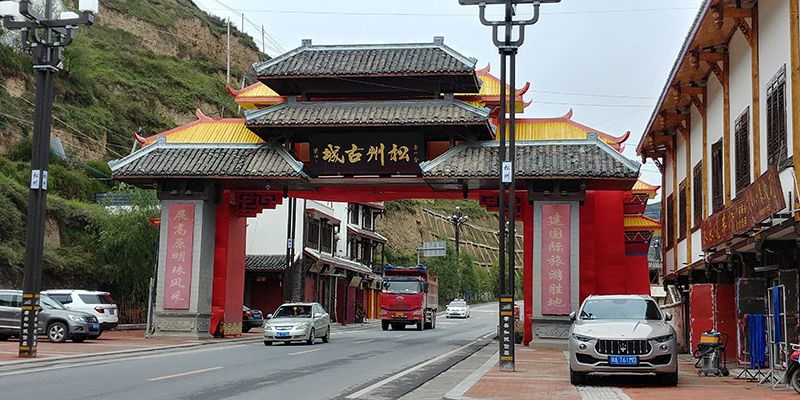 From one end of the street we could see all the way to the other end of the street which seemed to be marked by a huge old stone wall/gate. It was not far to walk so we slowly strolled down the road to the other end. The road was pretty dusty, cars and lorries drove by stirring up more dust into the air. The meat products that were hung in the open air in the shops fronting the roadsides were coated with thick layers of dust. 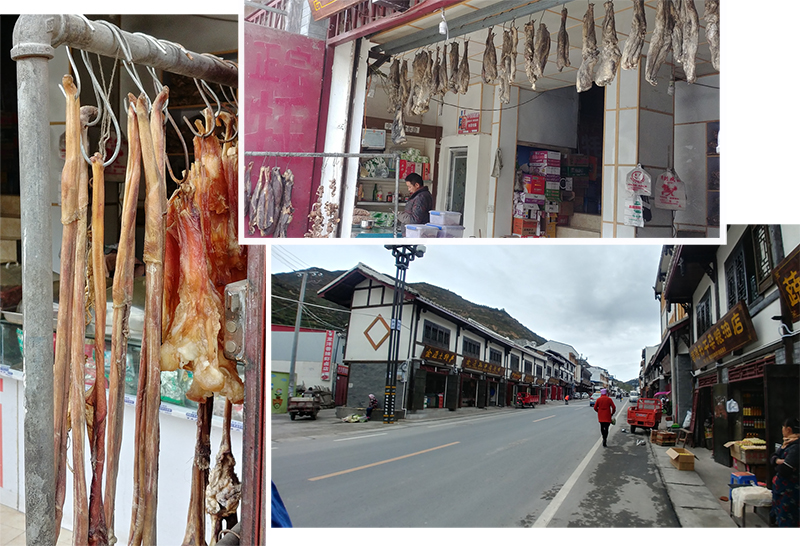 There wasn’t a lot of vehicles on the road, but every driver that drove down or up the road was always honking every few seconds and this spoiled the ambience of this quaint old town. Soon we reached the massive stone wall gate thinking that we had reached the end of the town. Surprising it was not the end but the beginning of an inner city. The stone wall gate was the North Gate of a walled inner city on the other side. 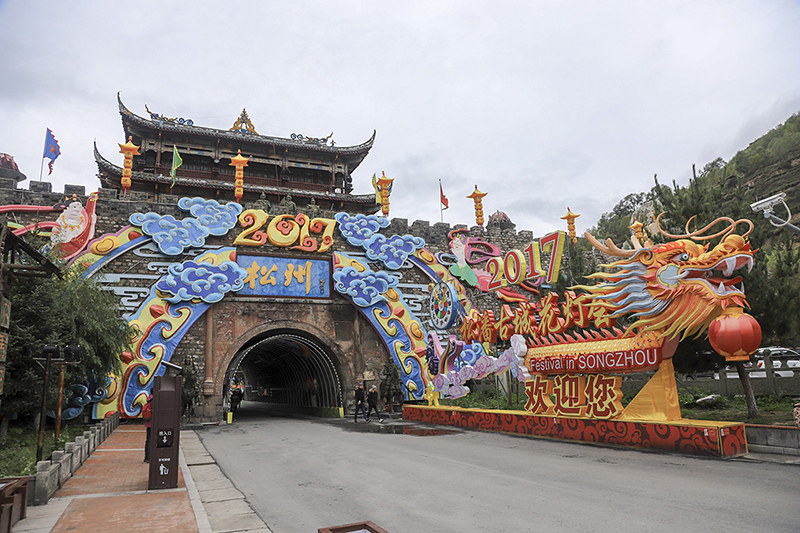 Outside the  North Gate was a huge statue of Princess  WenCheng and Tubo King Songtsen Gampo. Princess WenCheng from the Tang Empire was married to Tibetan King of SongZhou in 641 to form an alliance between the Chinese and the Tibetan. 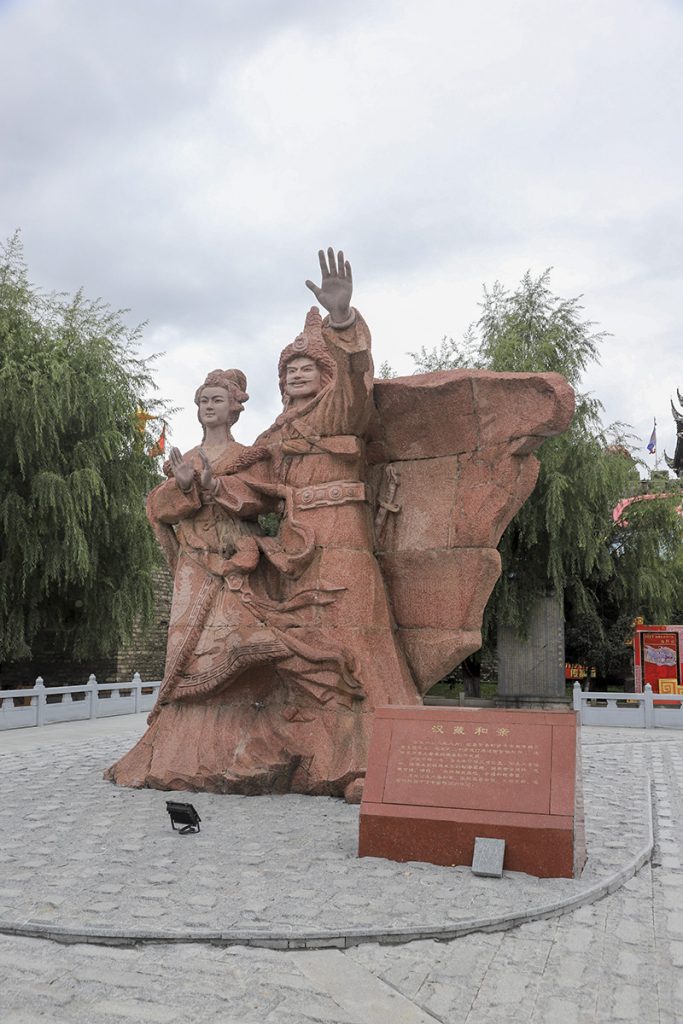 As we walked through the arch/tunnel of the North Gate, we were amazed by the  thickness of the wall. The city wall was built back in the Ming Dynasty (1368 -1644), it was made of blue bricks locally fired. The city wall was extremely tough, it was 10 meters high, 30 meters wide and 6200 meters long and was considered the best ancient city wall relics in China. 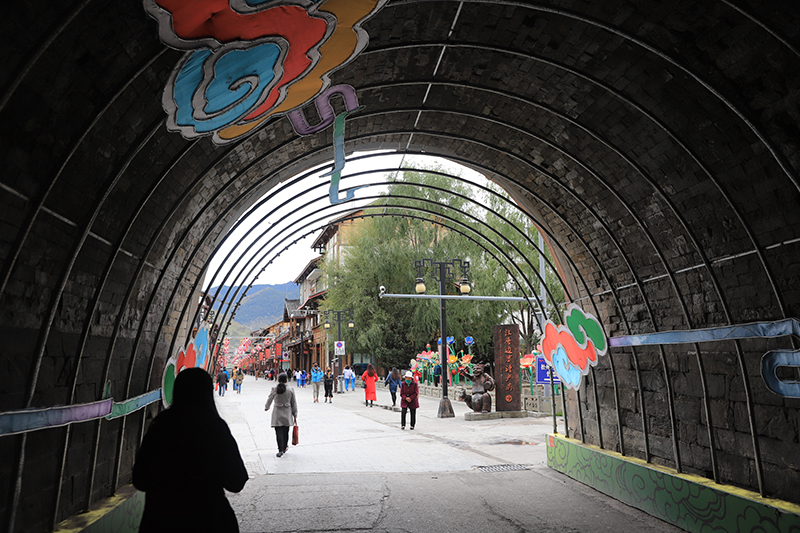 Arch in the North Gate

Walking through the North gate we entered the inner city and were pleasantly surprised to see a beautiful town. Cars and larger vehicles were banned from entering the inner city which accounted for a cleaner and quieter environment. Near the wall was a square with many life size bronze statutes depicting the daily happening in this city of the olden days. There was a couple of streets in the inner city but the main street seem most vibrant and interesting. 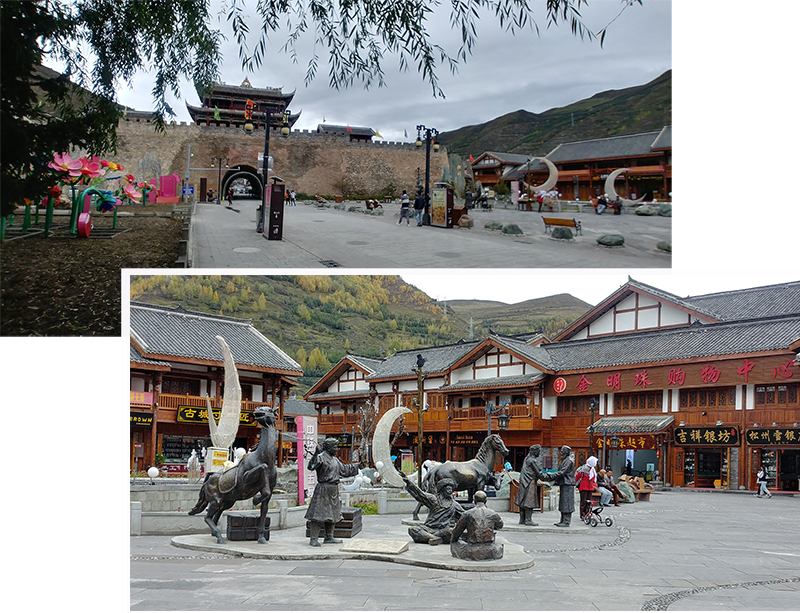 As we strolled down the main street we saw many intricate old buildings. They looked ancient and definitely with more characters than those in the outer city. We walked straight on and came to a beautiful ancient bridge spanning across River Min that ran through the inner city. 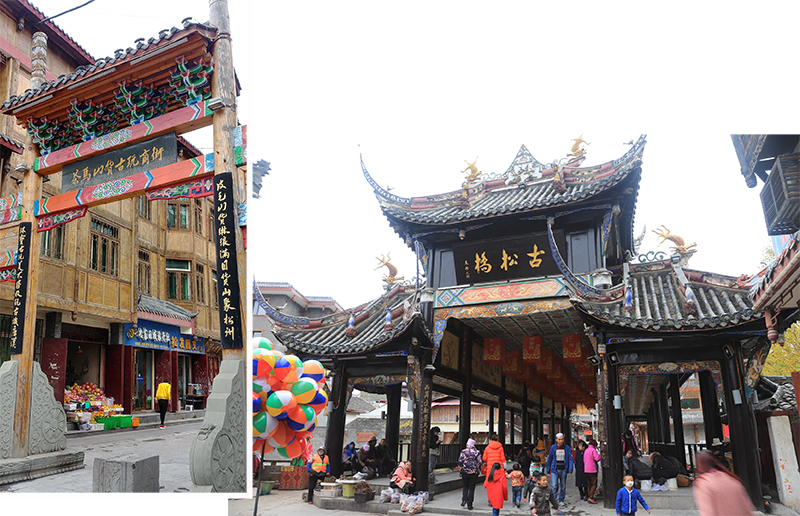 A street arch and a ancient bridge over river Min 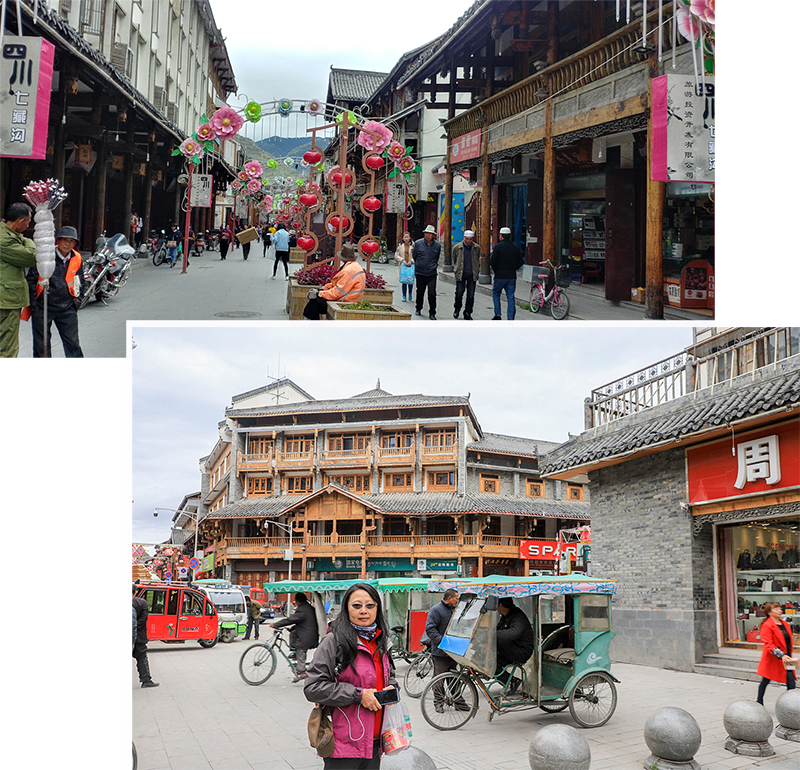 Main street of the Inner City

A short distance after the bridge we reached the South Gate of the inner city which looked similar to the North Gate. The inner city had five gates. North, South, East, West and South West gates. From my limited Chinese, I gathered that the East Gate was high up on a hill. 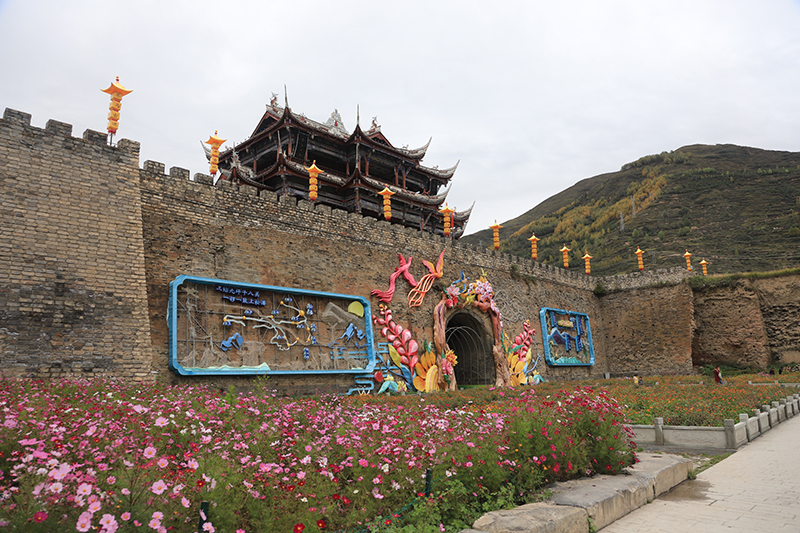 We booked Ajimu Guesthouse for two nights on Ctrip.com. Though it was relatively expensive compared to other hotels in the vicinity, we still went ahead to book it because we like the look of the guesthouse and the positive remarks left on Ctrip by tourists that had stayed in this guesthouse. On the Ctrip website, Ajimu Guesthouse looked quaint and impressive so full of old world charms. We paid SGD$120 (RMB ¥600) for two nights at the time of booking with no refund for any cancellation or no show.

Unfortunately our initially impression as we walked through the main door was disappointment because the place looked deserted and unkempt, the ground floor open-air compound was wet and messy. Near the main door was a glass reception room, but nobody was around to facilitate our checking in. It took many rounds of calling out before someone finally appeared. 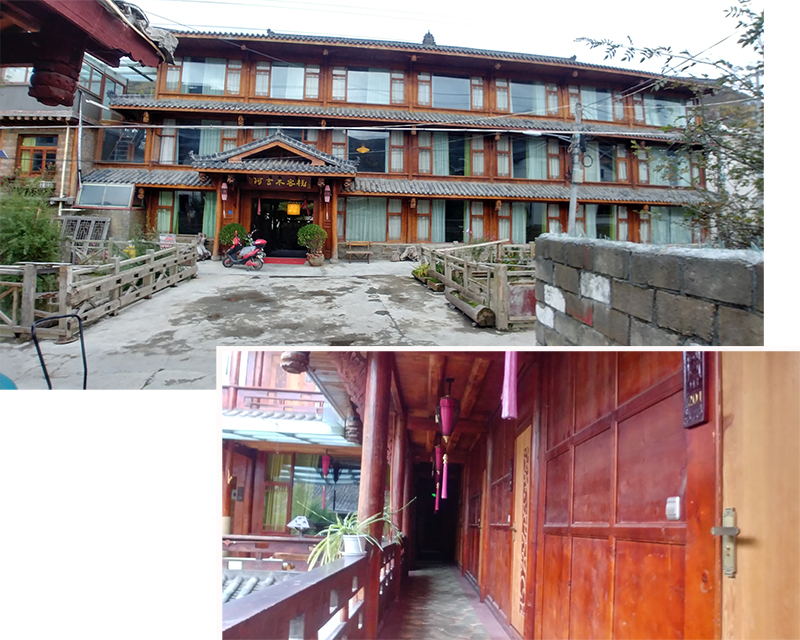 Luckily our twin room looked fine, it looked the same as in the pictures we saw at Ctrip website. The walls, floor and ceiling were made of wood and had a nice “wood” smell. The wood on the floor was very well polished and the room was very clean very unlike the dusty and dinky corridor outside our room. 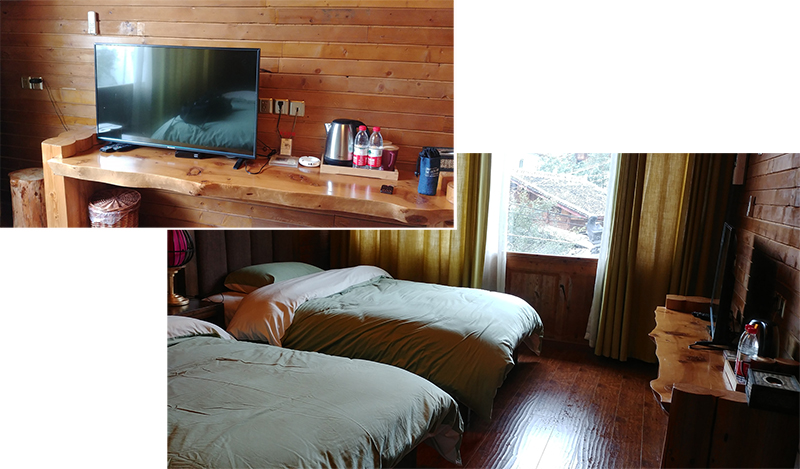 Our twin room at Ajimu Guesthouse

The bedside lamp and ceiling lamp in our room were lovely and they added some colors to the wooden interior of the room. The room aircon was great, it blew out nice warm air chasing away the wet and cold chills in our bodies. After viewing the room and its deco my initial regretful feeling about choosing this hotel faded. 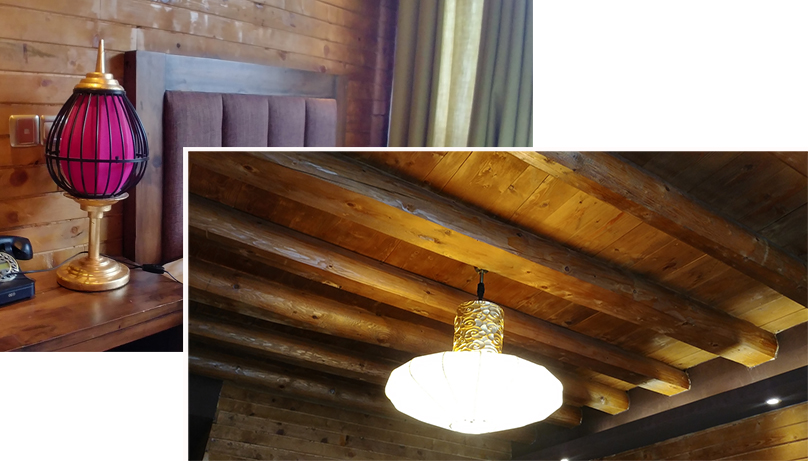 Lovely lamps in our room at AJiMu Guesthouse

Our room had an ensuite toilet, it had a bit of a stinky smell but luckily the smell dissipated. 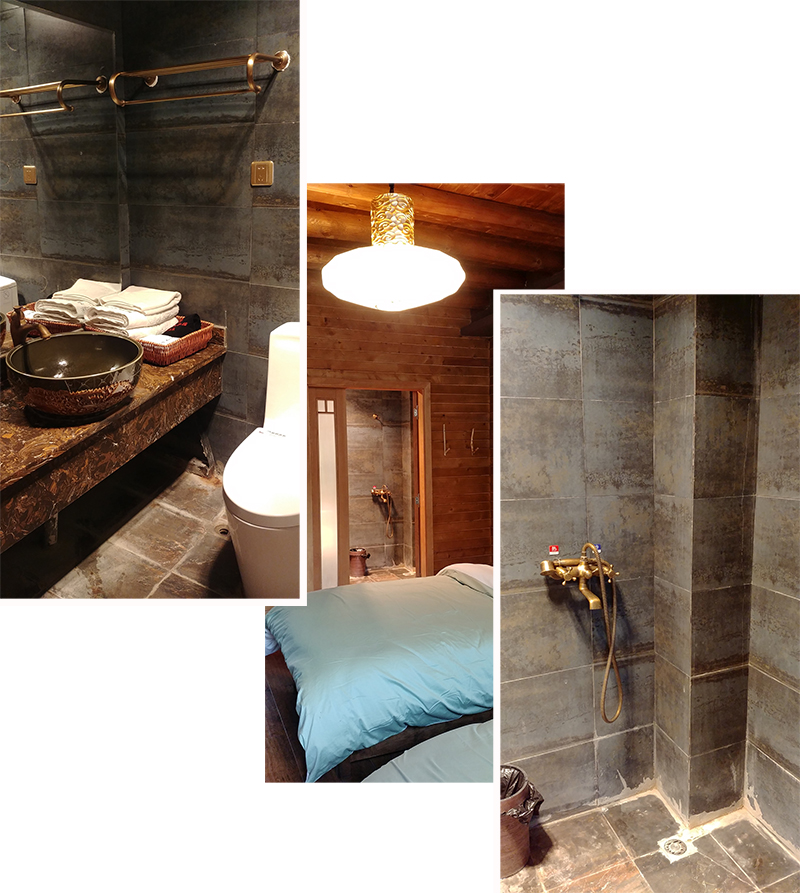 AJiMu Guesthouse was not as bad as my first impression, it was just the cold and wet weather that made some places in the hotel looked dinky and dusty especially in the non well lighted areas and corridors.

We walked across the wet/untidy courtyard and entered an interesting room. It seemed like a dining room and yet it was not meant as a eating place. On one of the walls were shelves full of bottles and on another wall shelves full of tea products. In the center of the room was long table. This was a “meeting” place where guests and the hotel owner/staff and friends came for their evening drinks. 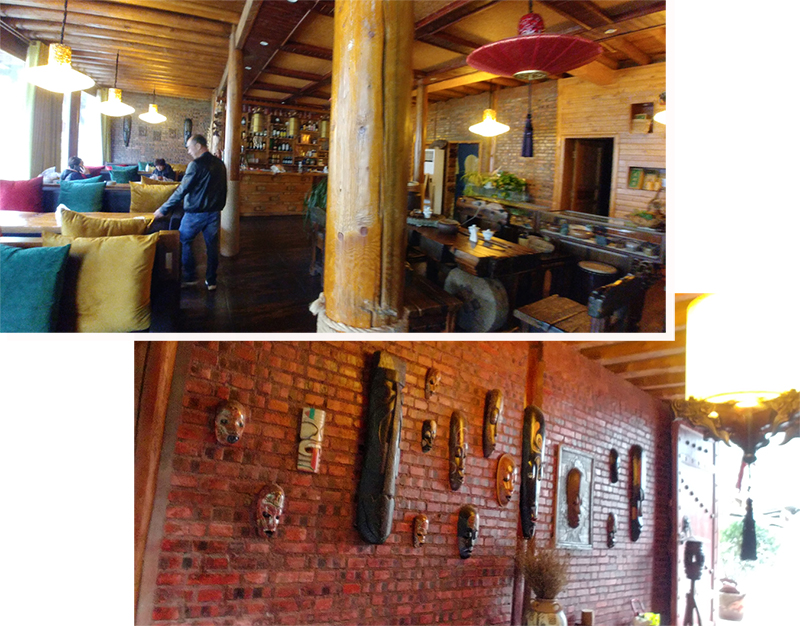