The plan was to go to TangKe and if there was enough time and the weather was fine we would visit the “First Bend of the Yellow River Scenic Area this evening”. If the weather was bad we would postpone the visit to the next evening. We had booked two nights at a hotel in TangKe so that we would have two evenings to catch view of the setting sun over the first bend of the Yellow River. 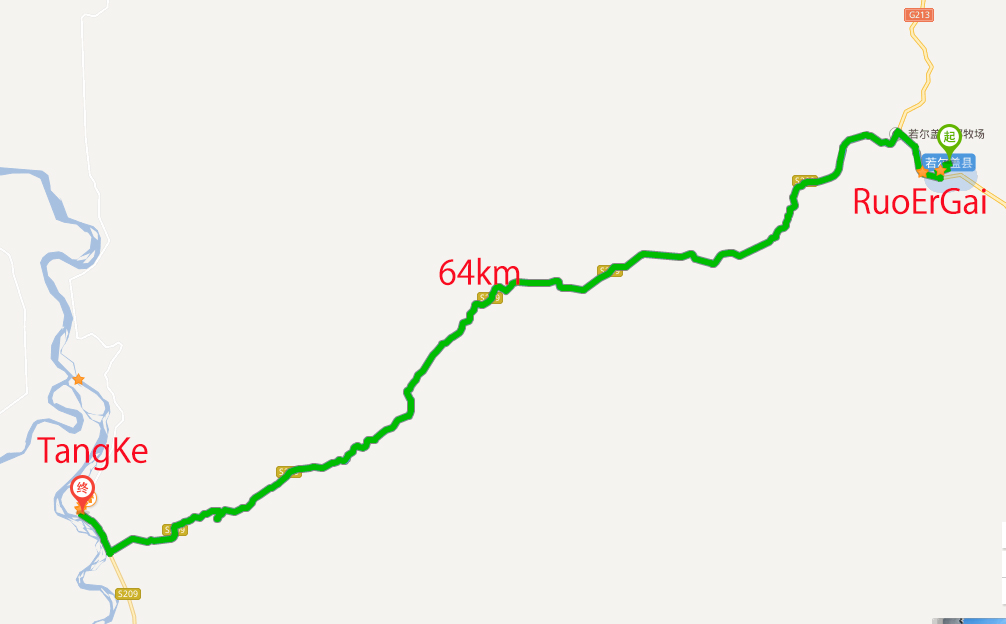 Route of the Day

At the End of the day
We had a very rude shock when we arrived at TangKe. We encountered a very unethical person but on the other hand there were also some very nice people that helped us out of our difficulties. The weather was good and we saw what we came for at TangKe.

We were the only guests at the hotel so we got the entire dining room to ourselves. Finally there was one thing we did not like about the Skyline Hotel. It was its breakfast. Truthfully we did not like all the three breakfasts that we had eaten in the hotels. Two at SeErCuo International Hotel and one at Skyline Hotel. All three breakfasts were very similar, it consisted of watery porridge,oily veggies, eggs, buns. Bland and oily food, just not our type. 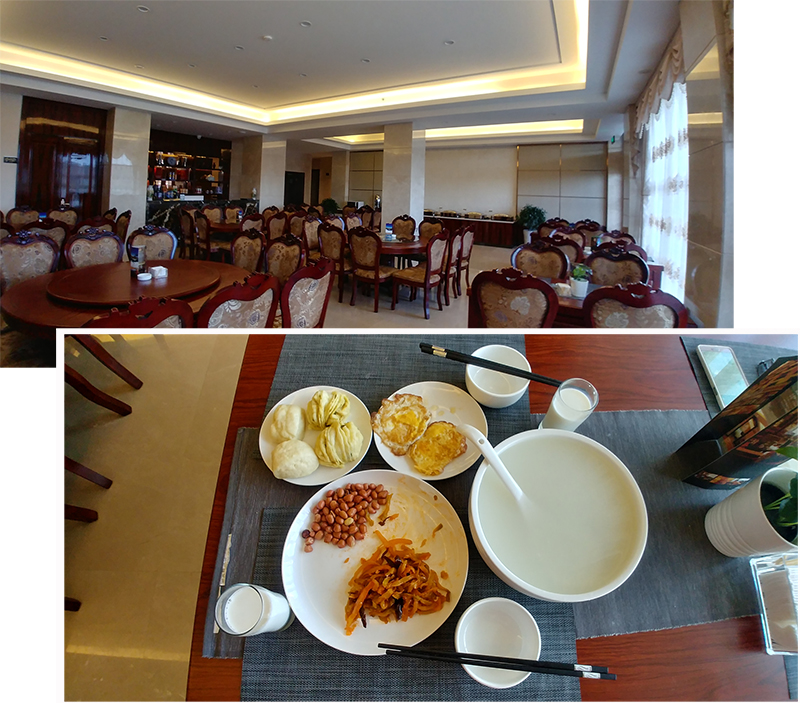 Bye Bye to the staff of Tian Yi (SKYLINE) Hotel

During our short stay at the hotel we had made friends with the young staff of the hotel. They were very polite and helpful all the time. On our final day, they allowed us to extend our stay in the room for two more hours without charges and even drove us to the transportation center. 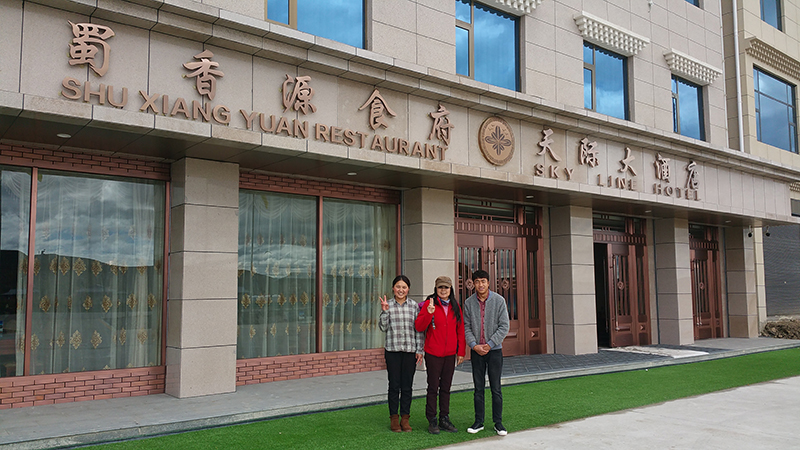 The young and friendly staff at Tian Yi Hotel

Bus from Rouergai to Tangke

Our journey started at 2 pm. We arrived at the station 20 minutes early and boarded the bus that was already parked at the bus bay with the sign “RouErGai <-> TangKe <-> to some other place” on its dashboard. So TangKe was an official mid stop not the final stop. 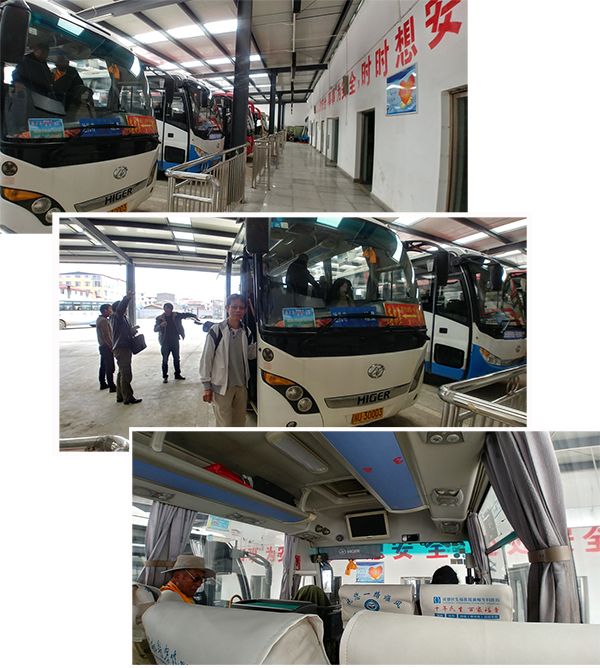 Bus from RuoErGai to TangKe

The bus started the journey on time but it still took a long time getting out of the town. The driver drove several loops around the town area picking up packages here and there from various people. By the time the bus truly left the town it was already 30 minutes late.

Our journey to TangKe was supposed to be an hour, but after one and a half hour we only managed to reach the outskirt of TangKe. Just about 1 or 2 km from the turnoff into TangKe the road condition took a disastrous change. It was no longer a proper tarred road but a muddy and rocky mud “TRAP”! Road that was almost impossible to pass. The bus ride turned into a “boat ride” it rocked and dipped and heaved through the huge portholes on the road! 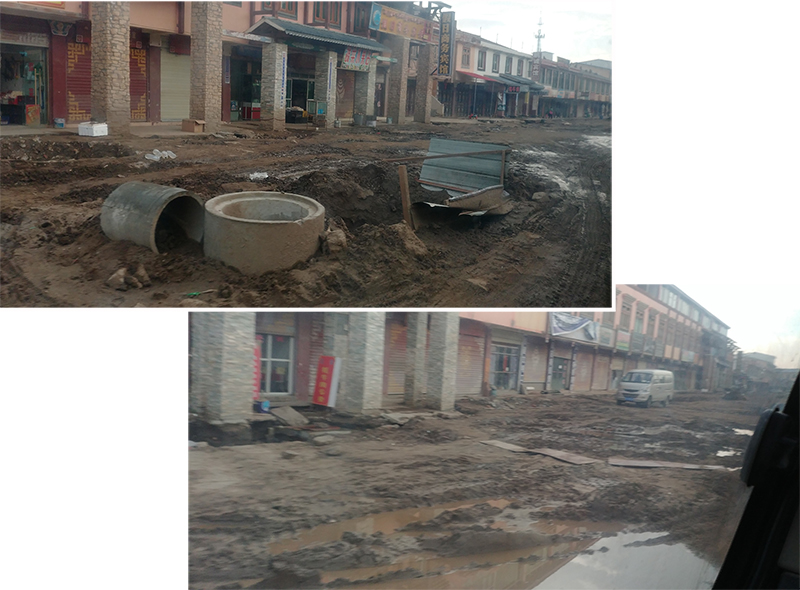 The roads had been dug up for some major reconstruction and left incomplete. It seemed that the road construction company had ran away (bankrupted) and the whole mess was left there for the buses, trucks and cars to wheel over and over. Huge depressions were left here, there and everywhere. We even saw a rider and his motorbike tipping over a hole. Vehicles and humans all had to negotiate through this mess.

Our stop at TangKe was not at a station it was just a stop by the side of the road. So we were left on the muddy road with our luggage. Our hotel was supposed to be 500 metres from the stop but with the place so messed up and we could not figure in which direction we should walk to reach our hotel!

I called the hotel hoping that some kind soul at the hotel would come to pick us up. I was so shocked when the owner told me that his hotel was closed for the season and I should cancel my booking and go to another hotel!  He was so unethical, totally not suited to run a hotel business. We had placed my booking of the hotel at Booking.com with confirmation from Booking.com. I got constant reminders from Booking.com about my upcoming trip and stay at this hotel. The last email from booking.com checked if I would like to include breakfast in my stay and that was only 2 days ago! The whole sorry situation was aggravated with the town in such bad shamble.

Looking for a place to Stay in TangKe

We saw some hotels across  the main road but they looked impossible to reach. Our luggage would not be able to survive crossing the road. There were just too many huge and water filled portholes all over the main road.  The side road where we were standing looked slightly better, though terribly uneven at least it was dry, so I went down the side road seeking for a hotel.

I walked through a hotel gate and crossed its parking lot to reach the main door. The door was half lowered so I slipped in. But there was nobody around. I shouted “anybody home!” in Mandarin but still nobody came.  We had no choice but to drag our luggage out. By now the wheels of our luggage were already caked with mud!

Dragging our luggage as we searched for a “liveable” hotel was not workable. So I had to leave Yat Thong (who did not speak Mandarin) to guard our luggage and went down the mud road to look for another hotel that would take us in. The next hotel was also closed. In desperation I stopped a local to ask for help and she pointed to Raphael Hotel, a tiny old looking hotel with a lighted signboard at its gate.

Yat Thong and I dragged our luggage to the hotel and managed to hold back the hotel manager and his wife who was about to lock up the place and leave as there was no guests for the night. We were worried that they would not accept any new guests but they decided to take us in. This was a simple hotel and the room rate was RMB¥120. 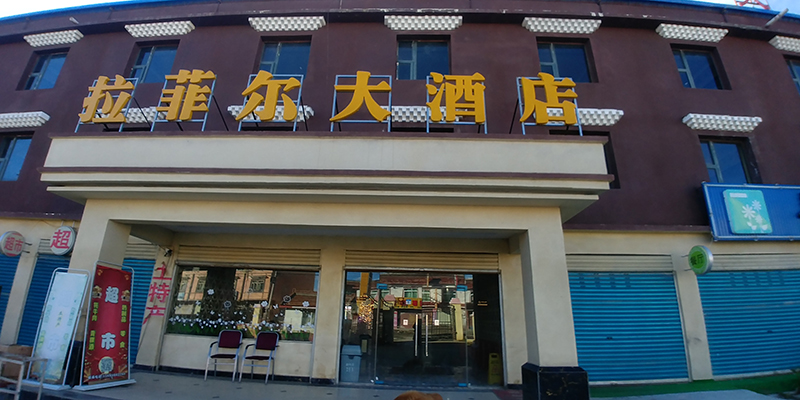 First bend of the yellow river

Mr Liu the manager of Raphael was a fantastic man. We requested for his help to drive us to the entrance of the “First Bend of the Yellow River Scenic site” which was about 1 km down the road and he agreed. With the town in this “terrible” condition there was no way we could get a cab/taxis or walk to the entrance of the scenic site. 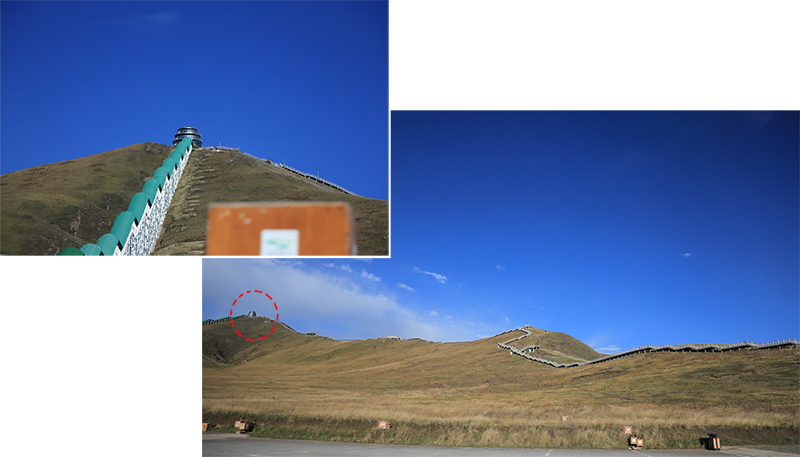 Elevator and stairs to the viewing deck at the summit

We had bought the combo ticket that covered both entrance fee and elevator fee, which was at RMB¥100 per person. It was close to sunset so the elevator was the fastest way up to the summit. If we had the time we would like to come down from the summit via the wooden boardwalk and stairs. Mr Liu parked his car just at the base of the escalator.

Oh mine! This must be the longest escalator on earth! 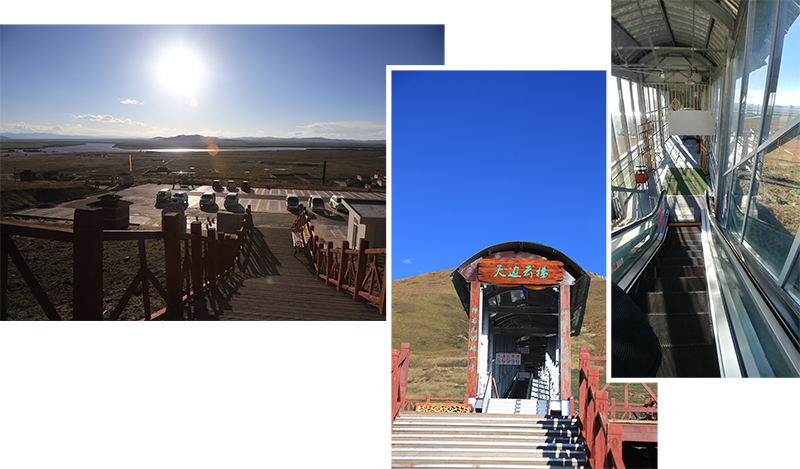 The escalator was actually a series of escalators, one after another. Just when we thought we had reached the last escalator another came into sight! It took us more than 10 minutes of escalator travelling to finally reach the top. At the top was a round structure with multilevel viewing deck. 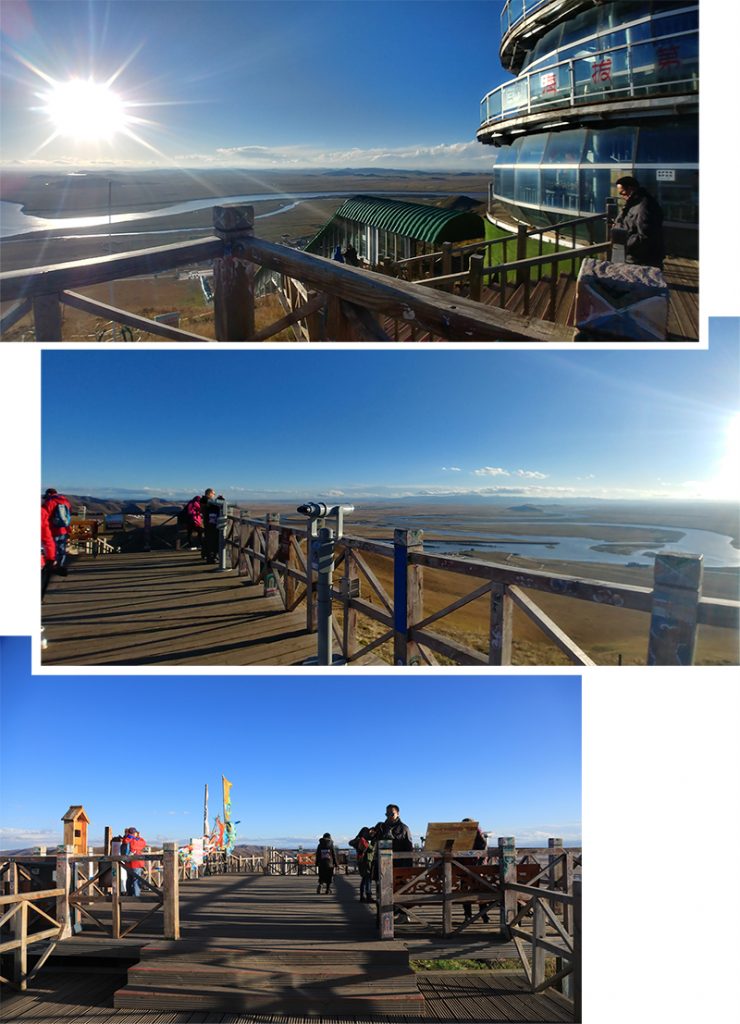 Mr Liu and his wife came up to the viewing deck with us and waited for almost two hours until the sun set. A visit to this place would be meaningless if we did not witness the setting of the sun over the “first bend of the yellow river”. We were worried about taking up so much of their times but Mr Liu was very understanding and did not mind waiting. 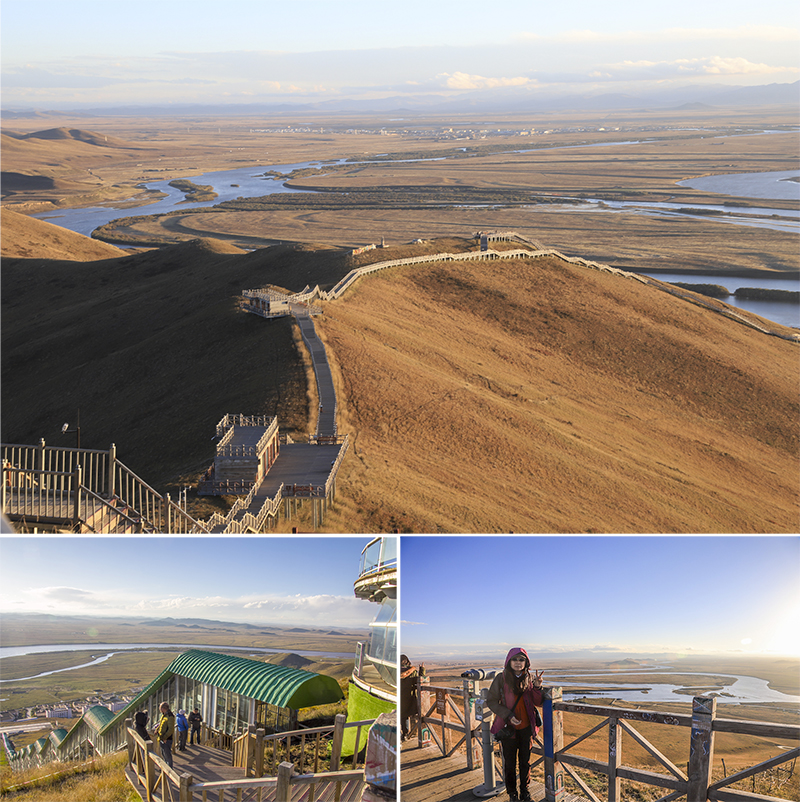 First Bend of the Yellow River

Up on the viewing deck the wind was very strong and the temperature was freezing despite the strong sunlight. The lower the sun moved down to the horizon the colder the air around us felt. We like many other tourists stood in cold and waited till the sun disappeared into the horizon. It was a wonderful experience. 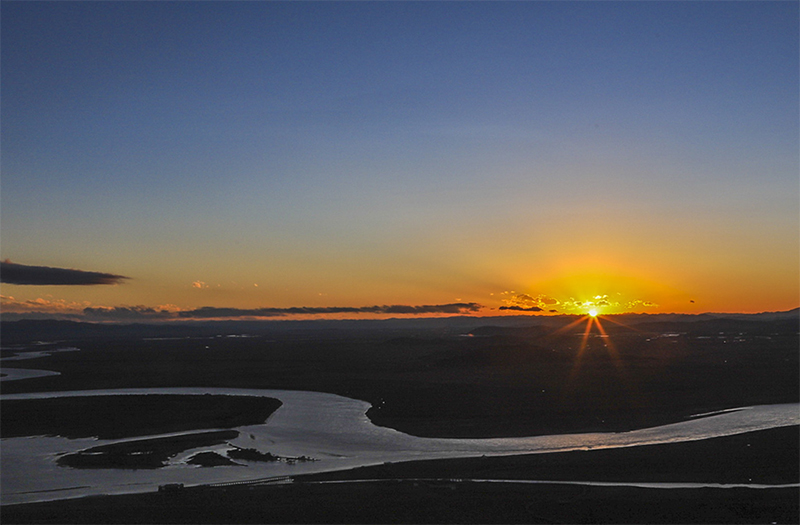 After the sun set, Mr Liu drove us back to the hotel. He had done so much for us and we wanted to buy dinner for him and his wife as an appreciation but he firmly and politely declined. It was amazing that within the same small town we encountered an unethical hotelier that turned our visit into a nightmare and a wonderful and helpful hotelier that saved our day.

We had our dinner in a restaurant just about a 100 meters from our Rapheal Hotel. Our order of three dishes and rice costed RMB¥86. The waitress told us that our dinner would be the last meal the restaurant was cooking, as after tonight the restaurant would closed for the next six months! She said half the restaurants and hotels in town had already closed and in a week’s times all would be closed. TangKe was a town that catered to tourists visiting the First Bend of The Yellow River Scenic Reserve and tourist season was from April to October. 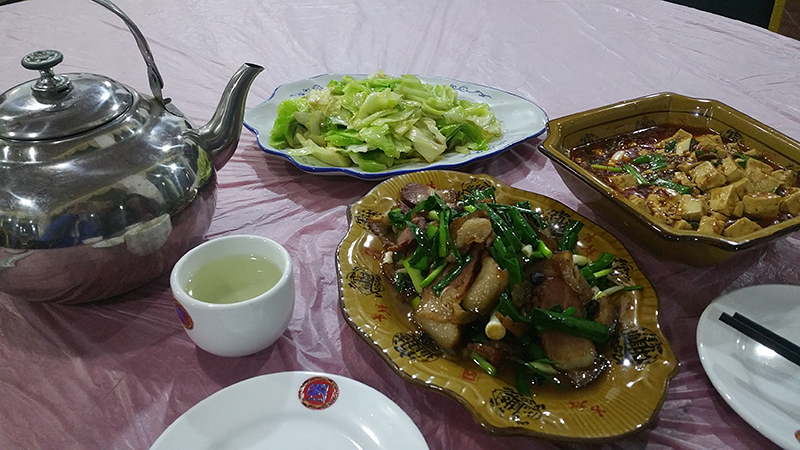 Our Accomodation for the Night

Hotel Raphael was a simple hotel and the room rate was RMB¥120. The room did not have aircon but it had electric blankets to keep us warm. The ensuite toilet was old fashion but clean. 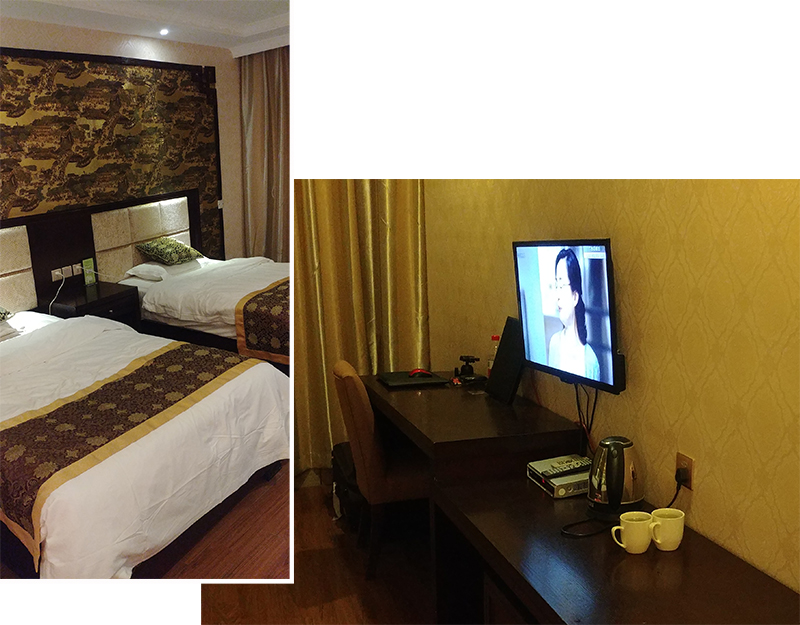 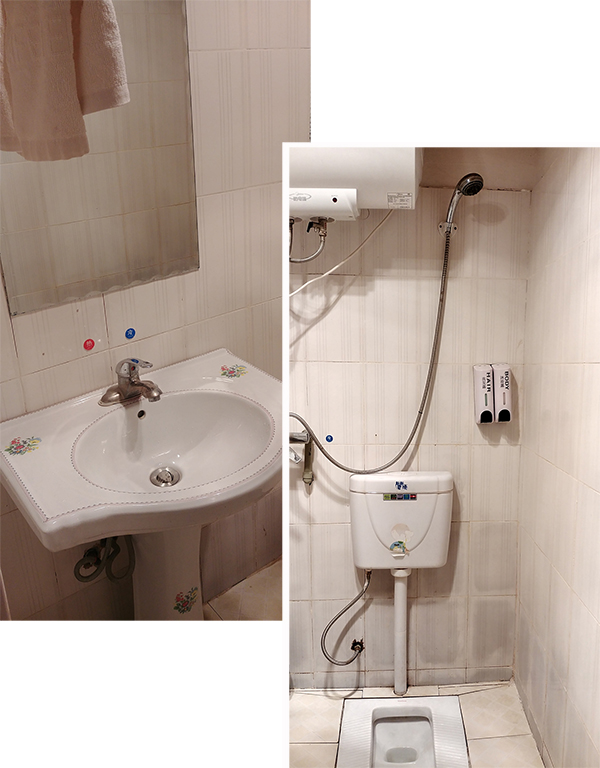