The plan was to get from HeiShui (黑水) to MaErKang (马尔康) by bus. Then to spend a night at MaErkang. The distance between these two places were about 160 km so the journey duration would be about 3 to 4 hour. There was no major tourist attraction at MaErKang except for a “Zhuokeji Headman’s Village” which sounded mildly interesting. As for MaErKang town it would just be a town/city, nothing exciting. 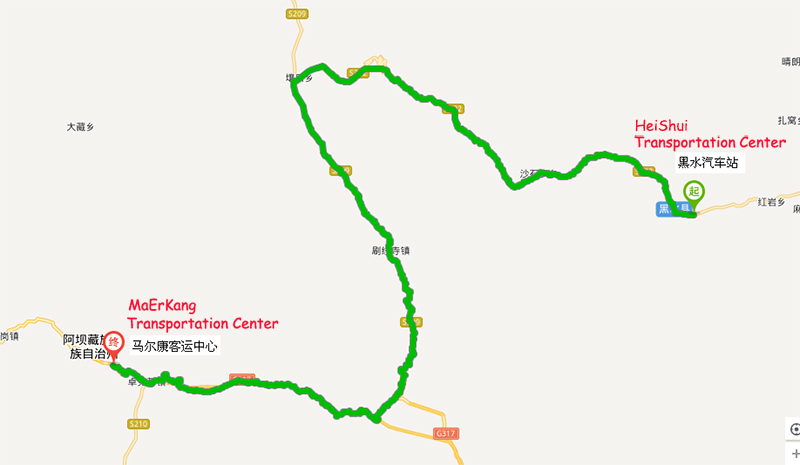 By end of the day
Our bus journey started sharp at 8 am and by the time we reached MaErKang it was close to 12.30 pm. We felt that the journey was terribly slow as the bus covered 161 km in 4 hr 30 minutes which meant that it was going averagely about 35km/hr.

It was a cloudy and rainy day, so upon reaching MaErKang we stayed in our hotel and lazed the rest of the day away coming out only for dinner.

Journey from HeiShui to MaErKang

Our bus tickets was bought the day before by our hotel receptionist as a service for us. She told us that she had arranged with the bus driver to stop outside our hotel doorstep to pick us up on the day of the journey as the bus would pass by our hotel.

This morning we woke up early and was down by the hotel lobby at about 7.15 am so rather than to wait for the bus at the hotel we decided to go directly to the bus terminal which was just 2 km from the hotel. We hopped into a taxis/cab at the taxis stand just outside our hotel and got to the bus terminal in just five minutes. The taxis fare was only RMB¥9. 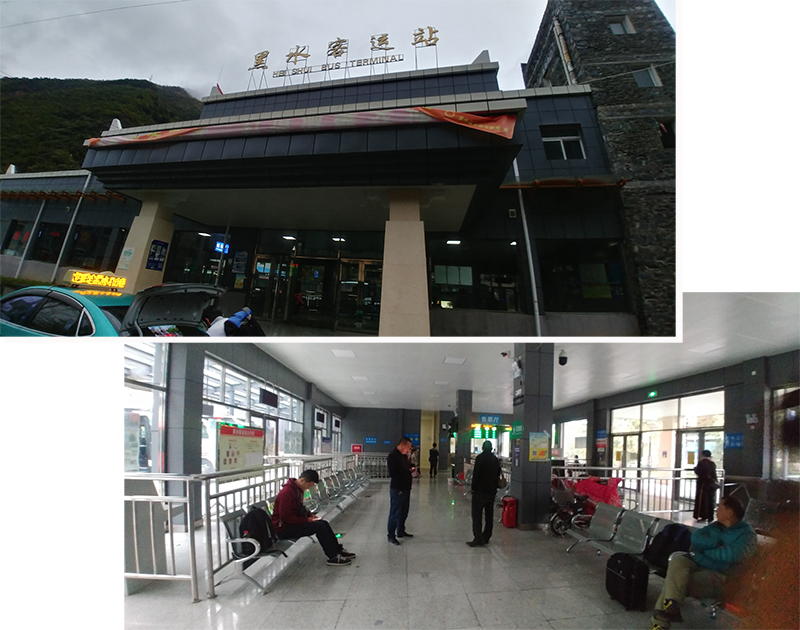 At the quiet bus terminal there was only a few people waiting in the terminal lobby. Being one of the first few to board the bus we got to sit at our designated seat. So far we had always bought our tickets one day in advance and being earlier birds we were given seats in the front part of the bus.  We preferred front seats as it would mean a less bumpy journey. At time we noticed some Chinese passengers taking up other passengers’ seats. So getting on the bus early before the arrival of other passengers early allowed us to claim our seat. 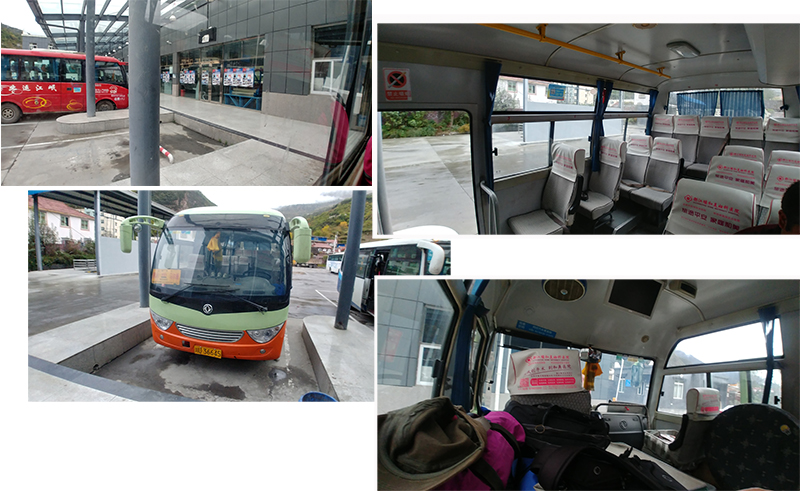 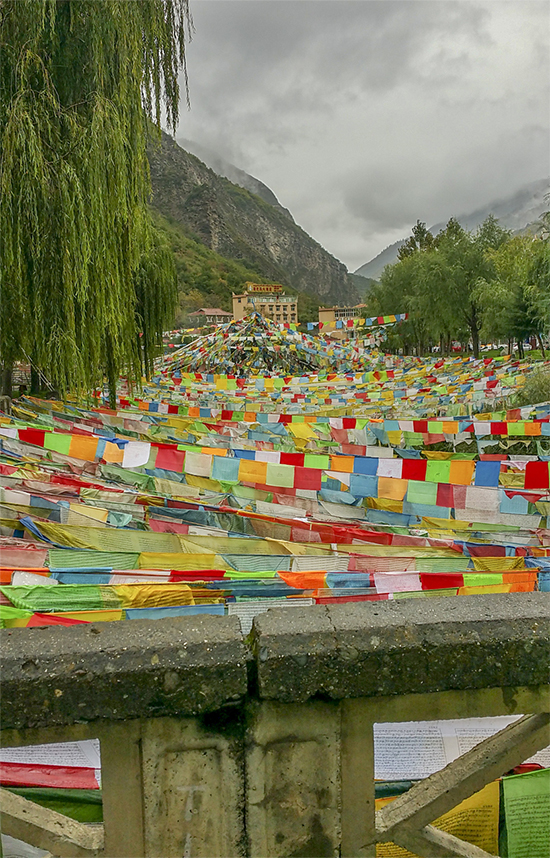 The bus started at 8 am sharp with only four passengers on board. Soon it passed our hotel ShenXianJu Hotel and HeiShui River.

The weather today was again gloomy, cloudy and misty. It looked like it might rain anytime. We did not plan for any sightseeing activity today so it did not matter if the weather turned bad.

Our journey to MaErKang back tracked about 50 km of route that took us from HongYuan to HeiShui two days ago. At that time our journey was going downslope into HeiShui County, today our bus was climbing upslope in the opposite direction.

Interestingly the scenery of this 50 km of route was drastically different from that of two days ago. It was a green valley previously, but today it was a winter wonderland. 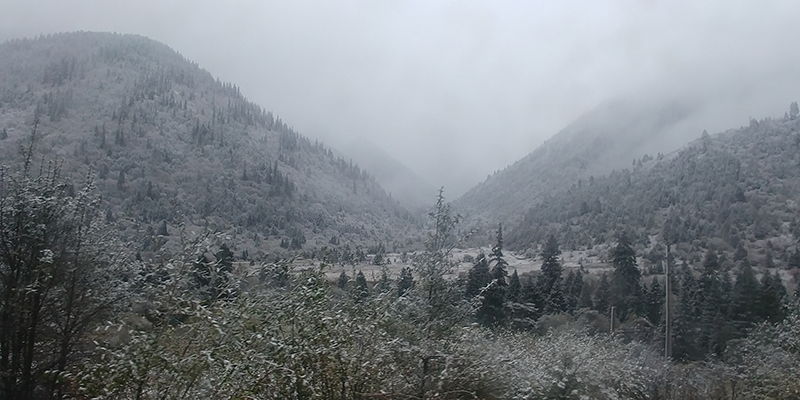 We passed through miles and miles of picturesque snow covered land. The best part was that it had snowed overnight so the landscape was not deeply buried in white snow which would resulted in a monotonous white landscape. Here the branches of the mountain of pines trees were lightly ladened with fine snow, these thousands of trees formed a uniform pattern on the mountain. Once our bus drove down the mountain the snow disappeared.

Finally after 4.5 hours we arrived at MaErKang Bus Terminal which was located on the outskirt of MaErKang town. At the terminal we bought our tickets to DanBa (丹巴). There was only one trip from MaErKang to DanBa each day and our ride would be at 7.10 am the next day. For the first time the ticketing staff requested for our identification and wrote our names on the tickets.

Our next task was to look for a hotel to stay for the night. One that was as close to the center as possible. Unfortunately it was drizzling and the idea of dragging our luggage in the rain was very unappealing. We ended in an eatery next to the transportation center and had lunch. 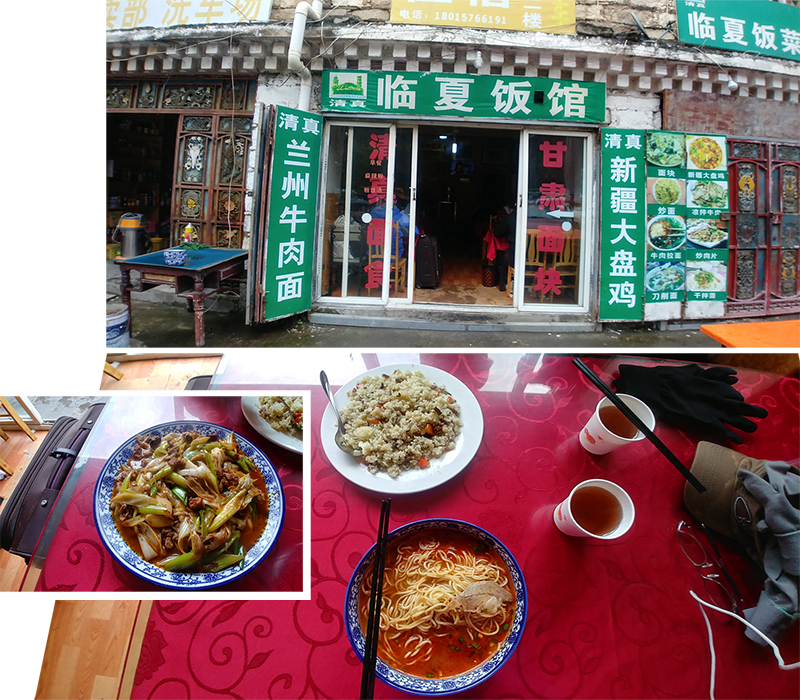 Lunch at a small eatery beside the bus terminal

We ordered a fried rice, beef noodle and a slice beef – vege dish. The cost was RMB ¥54 for the three items and Chinese tea was free. The weather was cold and wet so a nice hot meal was uplifting, after the meal we stayed in the the eatery surfing the internet, checking mails, answering whatapps etc until the rain lightened. It was a good rest and we were both energised and was all ready to drag our luggage up a slope beside the eatery where we saw a hotel.

Nothing to do buT rest

MaErKang was not one of our sightseeing destinations, it was just a convenient stop between HeiShui and DanBa, our next sightseeing location. MaErKang also known as Barkam was a county level city, so being a more populous place it was also where bus services from the outer regions ended up at.

We did considered hiring a car that would bring us directly to DanBa but dropped the idea as we could not imagine ourselves undertaking a 7-8 hour journey in an enclosed taxis/cab. Besides the fare could be as high as RMB¥700-800. We would rather break the journey into two parts with a night rest at MaErKang.

So today was our “transfer” day. It was a day of eat/sit/eat/rest/eat/sleep day. We ate breakfast, sat a 4.5 hour bus journey, ate lunch, rest 2 hours in our hotel room, ate dinner and went back to our room to sleep till the next day. It might seem boring but after a day of heavy walking at DaGu glacier scenic reserve the day before, a lazy day like today was good for us.

At about 7 pm we came out of our hotel in search of dinner. We did try to walk a distance down the main road but turned back because there was nothing interesting around the area. MaErKang bus station was on the outskirt of the town so there were just a few small shops around the vicinity. We settled for a restaurant not far from our hotel. 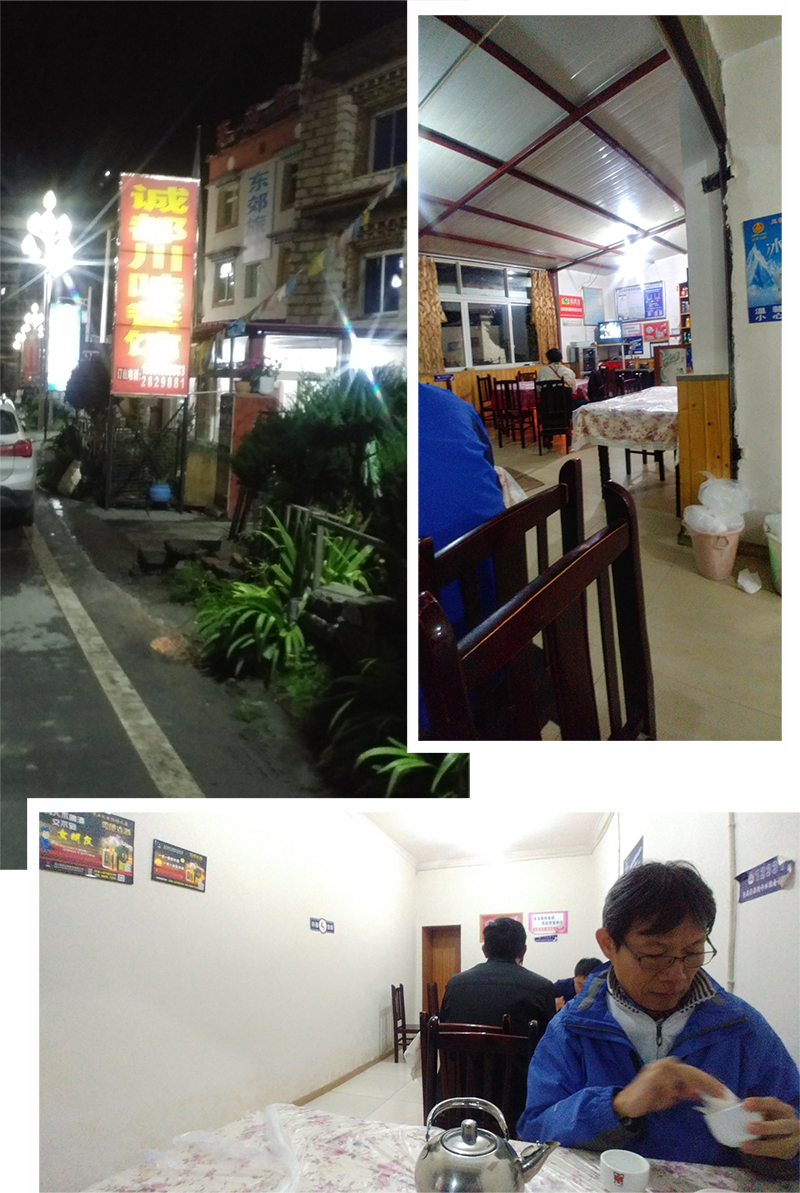 We ordered one vegetable dish, one beef dish and one curry chicken. There were more celery in the beef dish than meat and more potato in the chicken curry than chicken. It seemed that in Sichuan the meat serving in a meat dish was always very little. 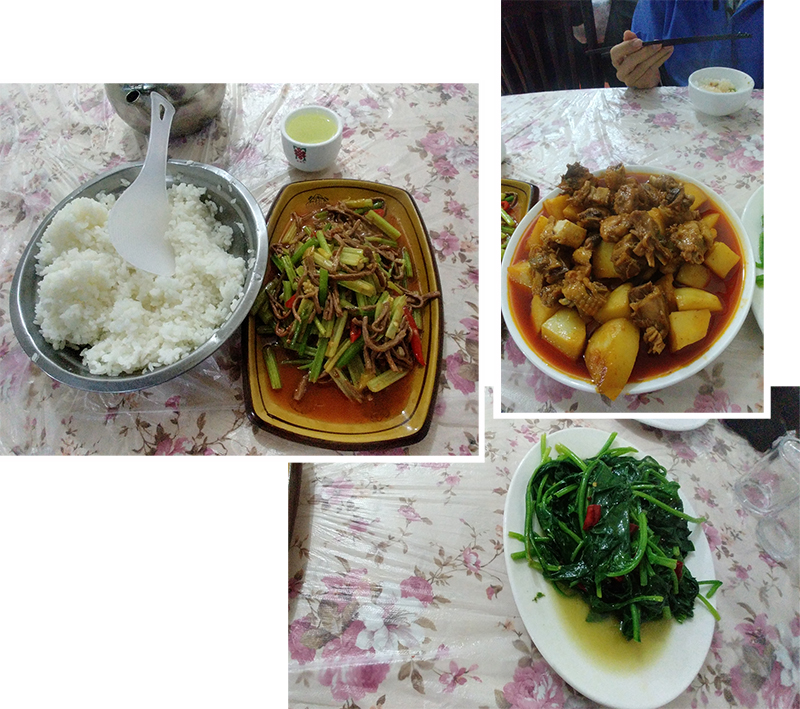 We got a twin room at 马尔康绒城酒店, this hotel did not have an English name. It was one of the better looking hotels beside MaErKang Bus Terminal. The ground floor was the reception and the 2nd level some sorts of a “Tea Place”, the rooms were on the 3rd level. We walked in and requested for a twin room.

We had originally booked MaErKang Royale Celebrity Hotel for the night. Unfortunately this hotel was 5 km from the bus terminal which meant we would have to wake up very early and hire a taxis/cab to get to the bus terminal before 7.10 am for our bus. On Booking.com and Ctrip, we could not find hotels that were just next to the bus terminal. We had also read on the internet that some hotels were not opened to  non locals. So reluctantly we booked a twin room at MaErKang Royale Celebrity Hotel even though it would be inconvenient.

Now that we had arrived at SiChuan and had seen the place we were confident that we would be able to easily get a hotel beside the terminal, so two days ago we cancelled our reservation at Royale Celebrity Hotel. 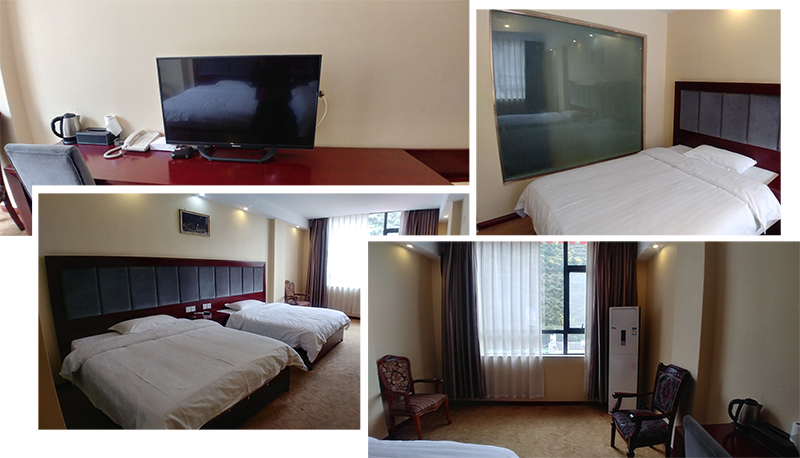 Our twin room at 马尔康绒城酒店 was RMB¥200 per night. Our room was on the 3rd level. There was no elevator so we had to lug our luggage all the way up. There was no porter too at this hotel. The room was large with two huge beds, sitting area and huge toilet. We were very happy with our room! 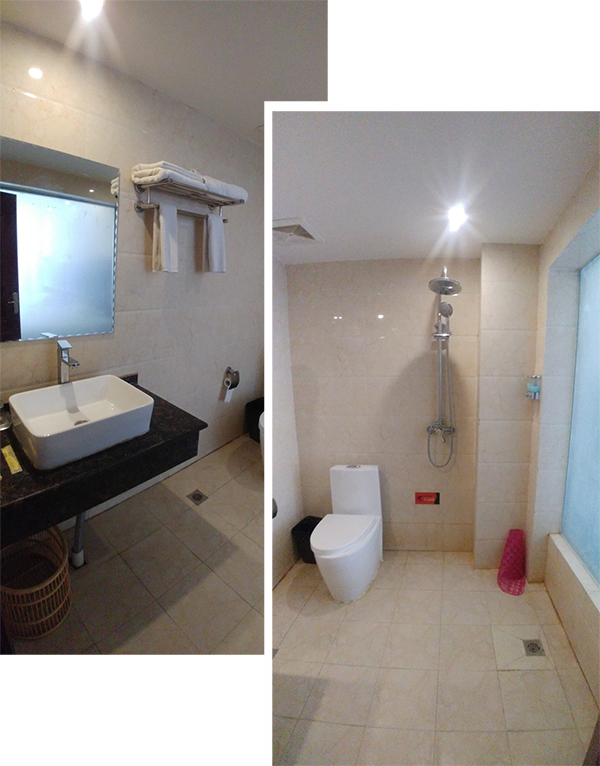