Our plan was to travel from MaErKang to DanBa (丹巴). The estimated duration of the bus journey was about 5 hours for a distance of 200 km. We should be in DanBa by about 2 pm. From DanBa town we still needed to hire a cab/taxis to bring us to ZhongLu (中路) village where we would be staying for two nights. ZhongLu village was one of the prettiest Tibetan Villages in the DanBa vicinity. 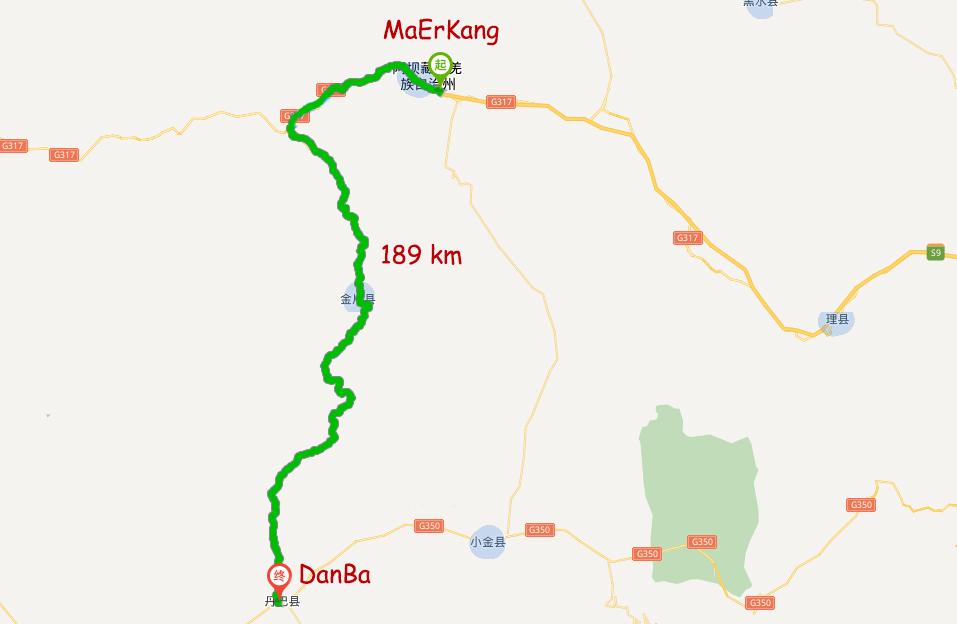 End of the Day
Our bus journey to DanBa took so long. Instead of 5 hours it took about 7 hours. The roads between MaErKang and DanBa passed mountains and valleys and were not well maintained so our bus ride was slow and full of bumps. Once we settled down into our hotel we found that we still had a few hours before sun down so we trekked up to a high observation deck for some sightseeing. ZhongLu Village was indeed a lovely place.

We woke up at 6.30 am, ate instant noodles for breakfast, packed our luggage and lugged them down two levels to the ground floor of the hotel. We were out of the hotel main door by 7.00 am and were at the bus terminal bus bay by 7.05 am! Our bus was already waiting there, it was a medium size bus. 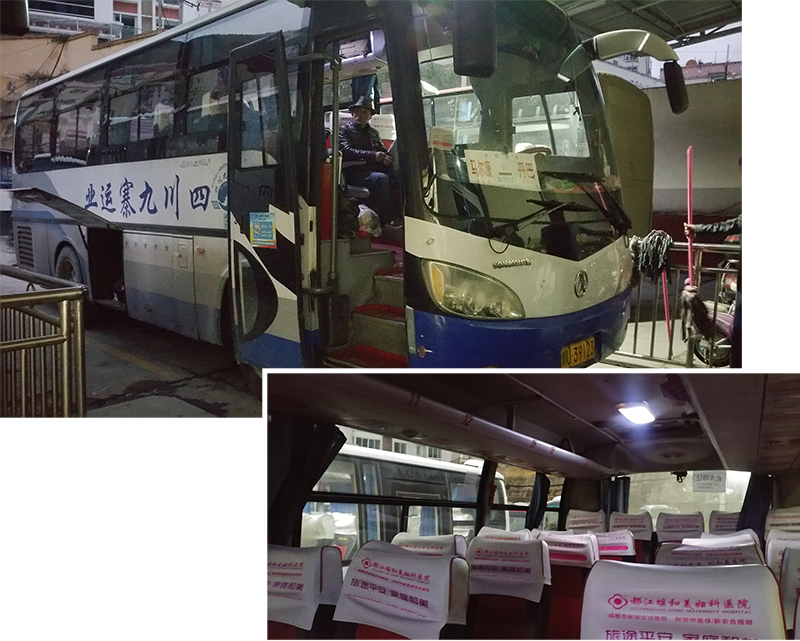 Our bus left the bus terminal at 7.10 am and drove westward into MaErKang town. The bus had only four passengers when it started off, but by the time it crossed MaErKang, it had picked up another 6 passengers. MaErKang town was pretty modern and had many high rises. Immediately after MaErKang the conditions of the roads deteriorated, it was bumpy as the roads were still waiting to be tarred, they were narrow as trucks, heavy machinery and construction workers were all over the place. This went on for a long stretch.

Three hours later our bus drove into JinChuan Passenger Transportation Center and the driver told us that it would be an hour stop before continuing to DanBa. Oop, this was unexpected but it seemed like JinChuan (金川) was a scheduled stop. 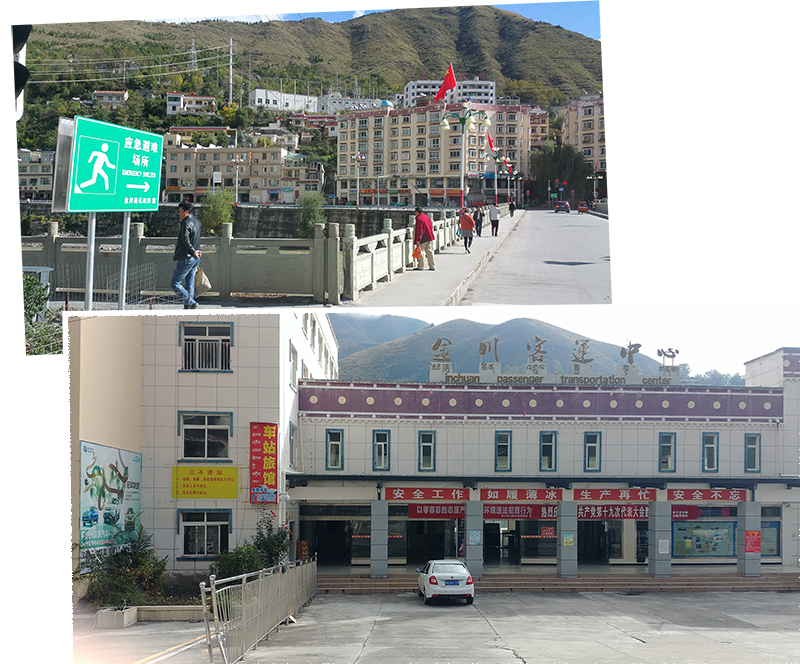 At 1 pm our bus left JinChuan Passenger Transportation Center driving towards DanBa. The road was beside a river, winding left and right following the curves of the river. At some sections the water was calm and at others it was flowing furiously. 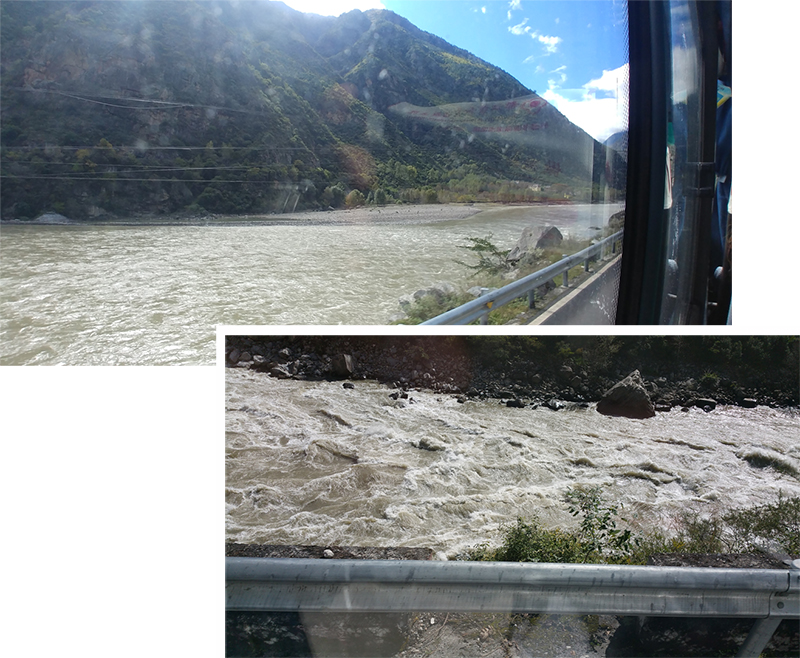 The road to DanBa was beside a river

Near to one town our bus stopped at a police checkpoint. A policeman came on board and scanned the passenger National ID card using a electronic device. Those that did not bring their ID cards just read out their card numbers to the policeman. As for us we were requested to follow the policeman to the checkpoint desk where our passports were inspected and documented. Before coming face to face with the Chinese policemen, I thought of them as non-nonsense, serious and intimidating officers, they turned out to be courteous and friendly to the both the locals and us.

At 2 pm we reached DanBa, our bus turned into a narrow road flanked by rows of shop houses. It then turned right and drove through the opened gate of one of the shop houses. The shop house was the bus terminal and it had a bus bay behind! 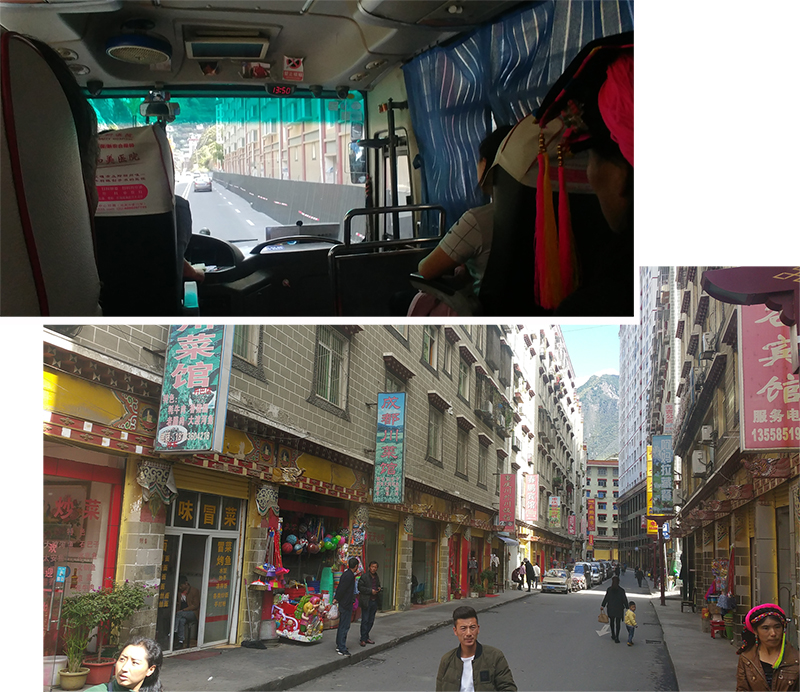 The moment we rolled our luggage onto the road we were surrounded by local drivers offering to take us here and there. One driver told me he would take us to ZhongLu (中路) village for RMB¥200. It was a ripoff because the village was only about 11 km from DanBa town. The greedy driver explained that it would be a difficult uphill journey and RMB¥200 was the normal price. 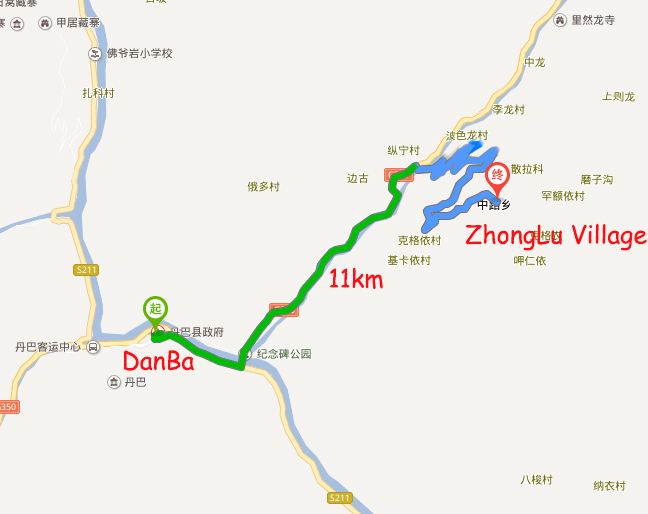 I called via WeChat the hotel manager of our accommodation at ZhongLu village to check if the fare of RMB¥200 was reasonable and was told that if we shared a taxis/cab it would be RMB¥30 for two of us! Unfortunately it was late and most of ZhongLu drivers were already back at the village so she had to send one vehicle down to ZhongLu just to fetch us. The fare for the whole car for two was RMB¥70.

I had a hard time telling the hotel manager our location, we were at an intersection where a huge peach colored bridge stood. I did not know how to pronounce the name of the bridge so I took a photo of our location and sent it to her via WeChat.  After about 40 minutes our transport arrived, it was a minivan that could sit about six persons. 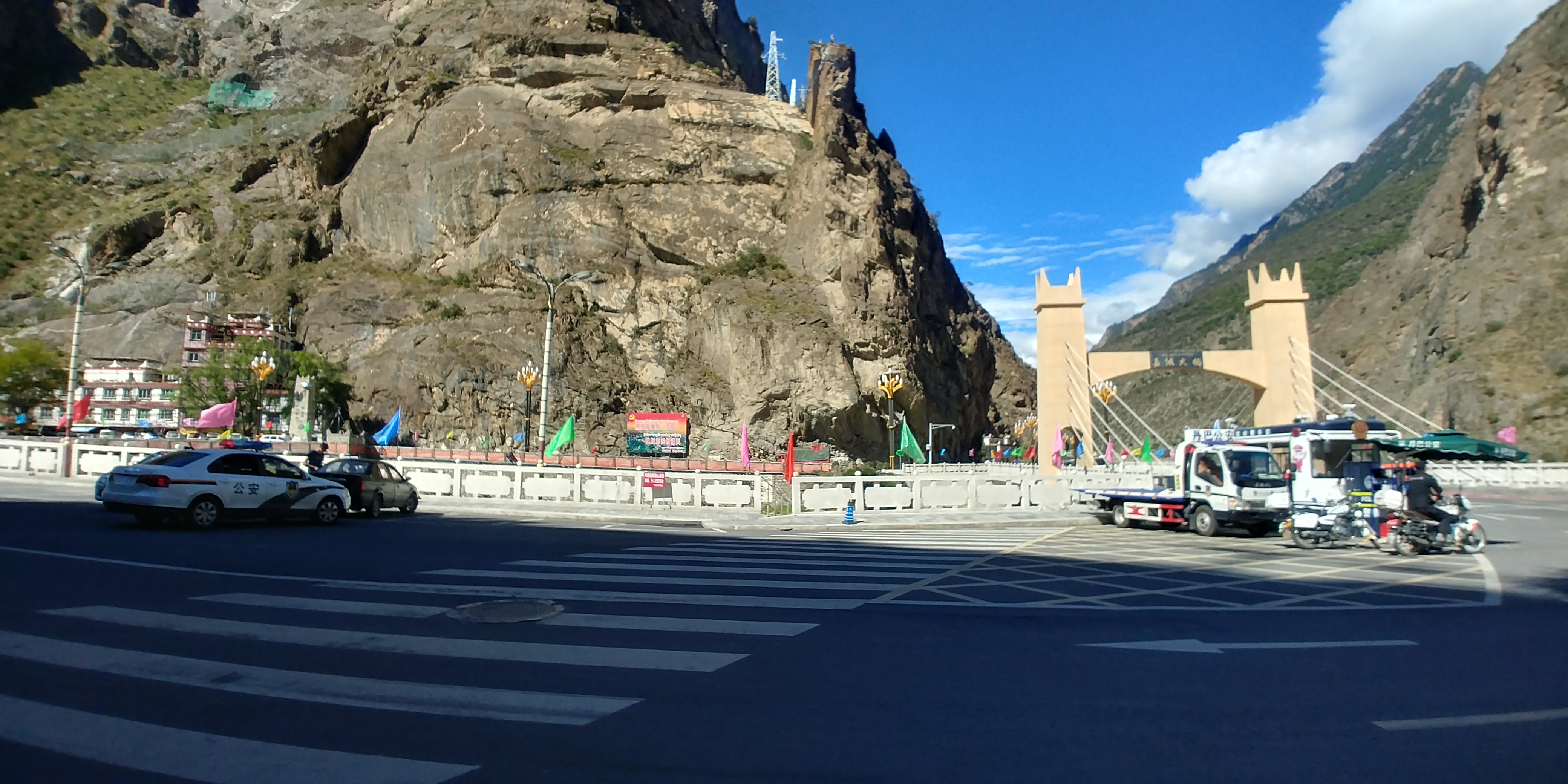 DanBa county was famous for it Tibetan villages such as JiaYu village, Suopo village, ZhongLu village etc. These villages were considered as the most beautiful villages in China and visitors to DanBa would visit them for their unique architectures and beautiful scenery especially during sunrise and sunset.

Rather than stayed overnight in the main town in Danba and set out to visit these beautiful villages in the day, we decided to make our base in one of them. We selected ZhongLu village after some research. What would be better than to be immersed in a beautiful setting?

Our driver drove us directly to our hotel at ZhongLu. Along the way he requested for permission to pickup some locals (since we had chartered the whole van). I told him that we did not mind the extra passengers as long as he offset the fare he collected from them from our fare. Somehow that information did not get to him as he assumed that by us saying “okay” meant we consented to giving the two locals “free ride”! When the locals took up the money to pay him he DECLINED! 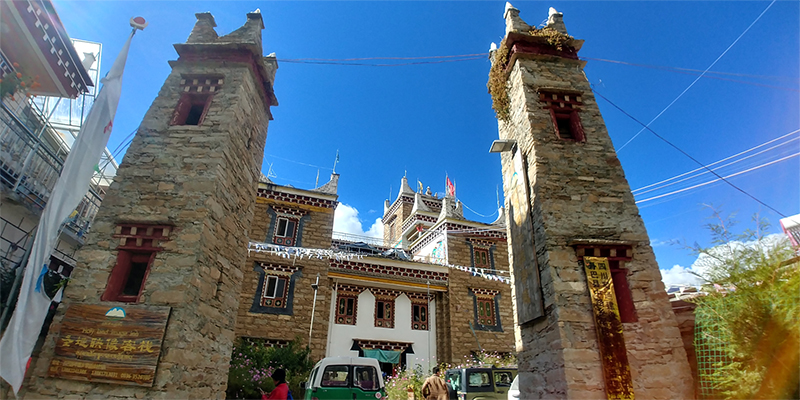 Our hotel ShengDi YingXiang Cultural Theme Hostel (圣地映像客栈) was a Tibetan style building. We had selected it because it offered a good view of ZhongLu village and the surrounding. We felt that even if we were to stay in our hotel for the three days and two nights we would still be able to enjoy the great “ambience” of this beautiful place. 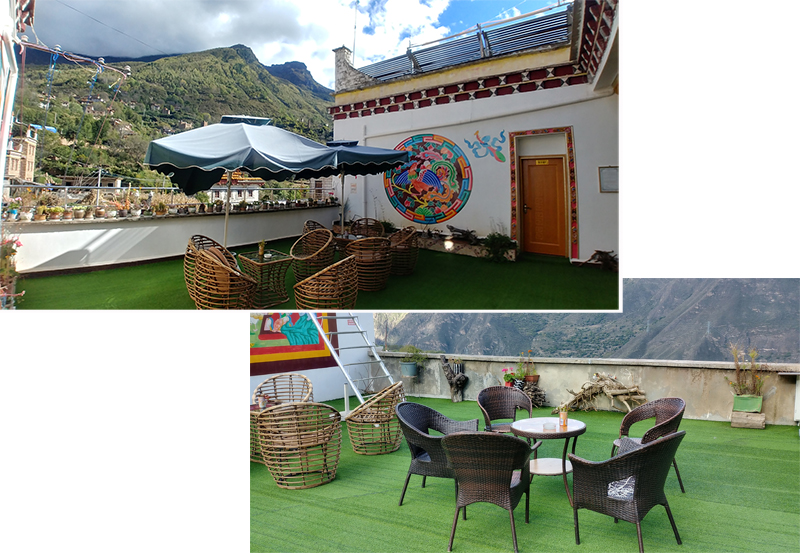 Huge Balconies at 3rd and 4th level of Hotel

Our room was on the 3rd level and outside our room door was a huge open air balcony that looked toward the west. On the 4th level there was a even larger open balcony that had great view all around. Our hotel manager recommended observation deck 3 on the high mountain opposite our hotel for a great view of a sunset over ZhongLu village. 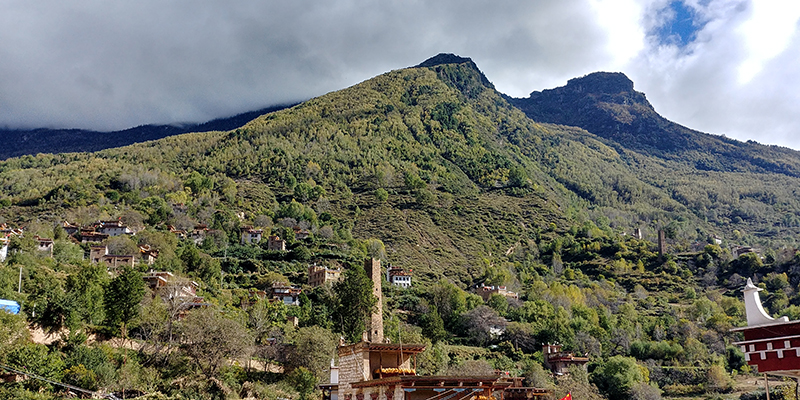 View of ZhongLu village from our hotel

Trekking to the observation deck

We were told to turn left at the front gate of our hotel and follow the road that led deeper into the village and we would be able to find observation deck 3. Our hotel manager assured us that we would not get lost and should get to the deck in about an hour.

Our trekking to and back from  “observation deck 3” was more difficult than the impression given by our hotel manager. There was no directional sign on the road pointing to deck 3, if that was its name. Along the way we checked with other locals that gave conflicting directions. We were directed off the road on to a slope with slippery dirt steps. After the steps there was no more proper path, just dirt path that was not even obvious at some sections. 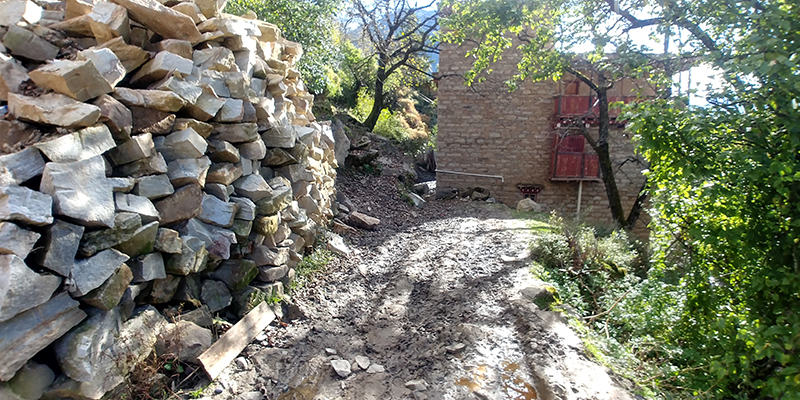 Is this the way to observation deck 3?

We once ended up in a private compound and had to apologise for trespassing. Three times the dirt path was blocked, twice by low stone walls and one by a flimsy gate, all three times we had to climb over as we did not see another way through. Nearer the top, the dirt path joined another path coming from below. This second path was in a better shape and as we walked uphill we saw others coming from the top. These people came by vehicles to a road higher up the hill and trekked downward to the viewing area. There was no obvious viewing deck just an area on the hill that had a fantastic view of the villages below. 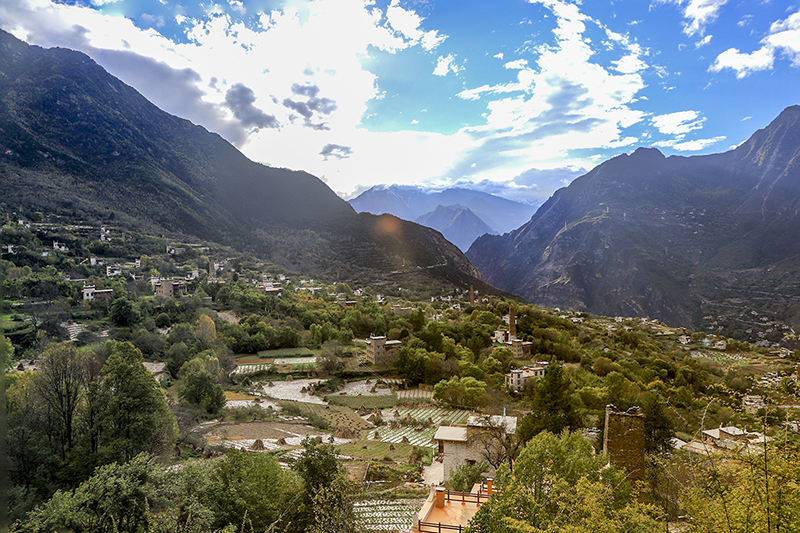 Tibetan villages as seen for a high view point

We would love to stay till the sun went down, unfortunately we could not because we did not have the confidence to get down to our hotel via the “lousy” path we came. It would probably be dark and would be too dangerous. So at about 5 pm we set off back to our hotel. We thought that was should have an easier time getting back but somehow along the way we must had taken a wrong turn and soon we found ourselves on a slope among heavily overgrown bushes and no path under our feet. It took another 15 minutes of trampling through the thorny vegetation, collecting mud and cuts on my hands to eventually get back on the right path. 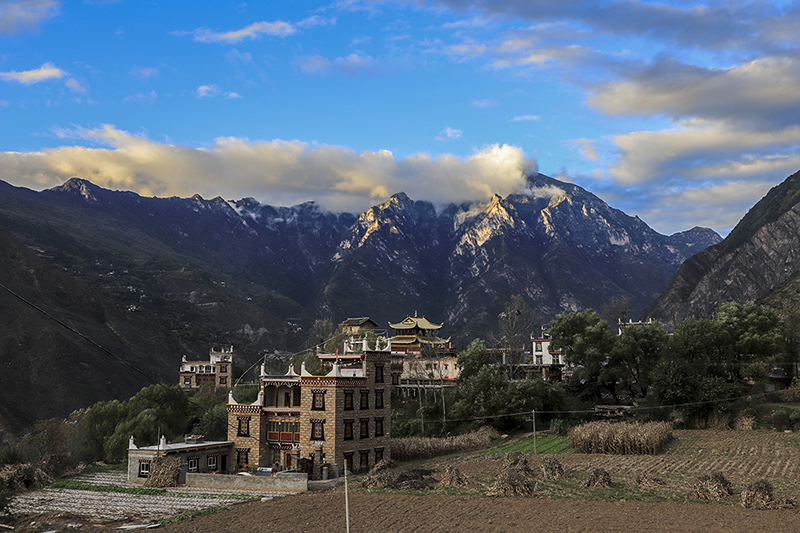 A temple at ZhongLu village

We ate dinner in the dining room in our hotel. The dining room was on the ground floor of another building in the same hotel compound. We ordered three dishes to go with our rice. The price of our meal was RMB¥80 pretty reasonable. 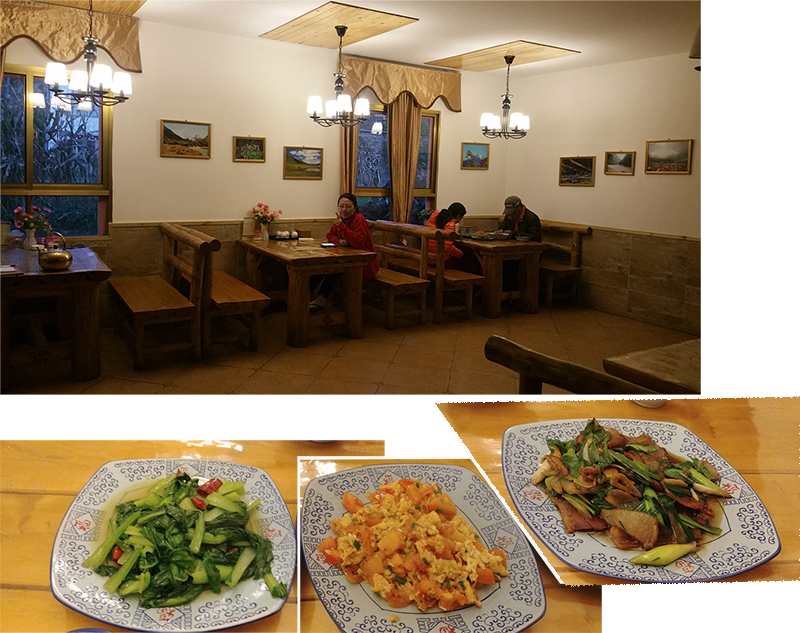 Our double room at Shengdi YingXiang Cultural Theme Hostel was very nice, much better than our expectations. It looked like a luxurious Tibetan styled room. Even the small “chandelier” was very pretty. The room was clean and big and had everything we needed for a 2 night stay. 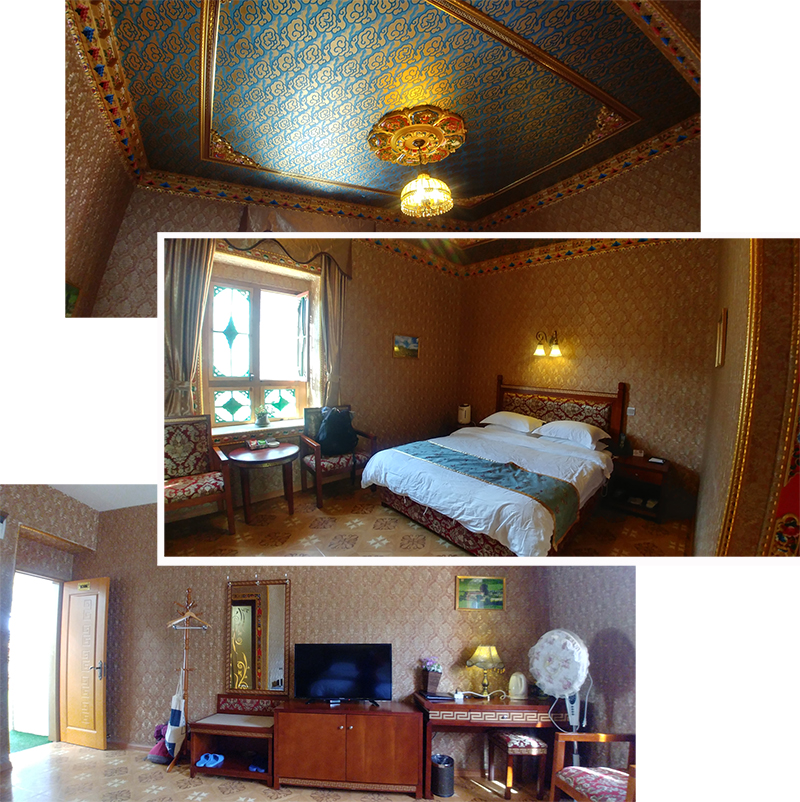 The attached toilet was big, looked lively and very clean. There was a heater above the shower area too. When we selected a Tibetan style hostel, we were a bit worried that the room might not be very comfortable so it was a great delight to have been proven wrong.

Our room was booked through Ctrip and it costed RMB¥716 for the two nights. 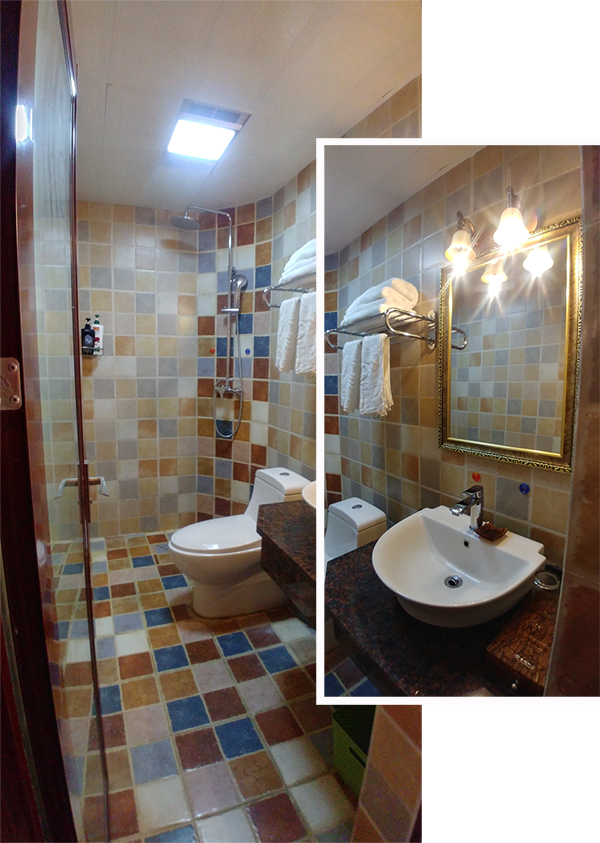