Today would be another “transfer day”, our plan was to travel from ZhongLu village to Rilong Town (日隆镇). Rilong Town was the closest town to the three famous valleys of SiGuNiang Mountains, which were ShuangQiao valley (双桥沟), ChangPing valley (长坪沟) and HaiZi valley (海子沟). Each valley would need a full day of exploration.

We expected to reach Rilong some times in the afternoon. The distance between ZhongLu village and Rilong town was about 110 km and a car ride would take 2.5 hours. We felt that with only a half day left we should not embark on any visit to any of its three the valleys. We would rather spend the rest of the day relaxing in our hotel.

By End of the Day
We started our journey from ZhongLu Town Village at 10.45 am, 45 minutes later than our targeted set off time due to a missing driver. The journey from DanBa town to Rilong town took about 3.5 hours which was an hour longer than expected. This time we did not travel by public bus but traveled in a shared-vehicle (a SUV for 8 people). By the time we reached our hotel it was close to 2.15 pm.  Our hotel, YunXiGu Hotel (小金云溪谷客栈), on BaiDu map looked only a km away from the town center, was actually at a bottom of a beautiful valley.

For the rest of day we were very happy to relax in our room and enjoy the tranquility of the valley as could be seen from our room window.

The night before we were invited by a Chinese family staying in a room on the same level as ours to join them for early sun rise viewing. They had hired a 8 person SUV which could hold 7 tourists and a driver. The family had only 5 members which meant the SUV had two empty seats.

It was so nice of them and we accepted their offer. We did not plan for a sunrise trip because we were not sure if the view was worth hiring a car for RMB¥200 or the hassle of finding others to share the hired car.

The hired car driver arrived at 7.00 am sharp and drove us to a nearby hill where we trekked a short distance to the viewing area. There were already many “early birds” out and about at the viewing area. The air was cool and clear, the sky was a bit misty and the scenery was bluish. From our view point we could see far and wide. We could see several villages in the distance, some near a meandering river at the base of a valley and others near a zigzag road going up to the top of a hill. 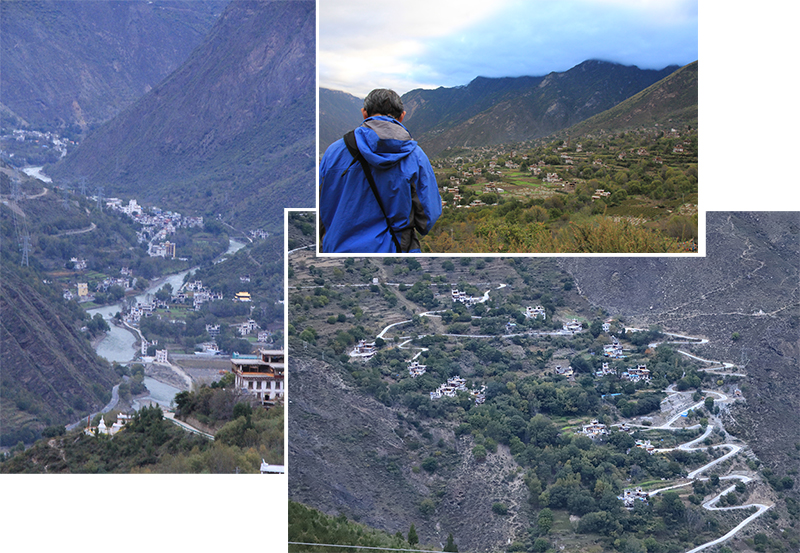 There was no beautiful sunrise this morning. Not sure if we were facing the right direction or it was too misty. Soon the sky, valleys and hills brightened up and the white Tibetan houses with their unique roof structures and the stone brown-color watchtowers stood up prominently nested among the country side greenery. 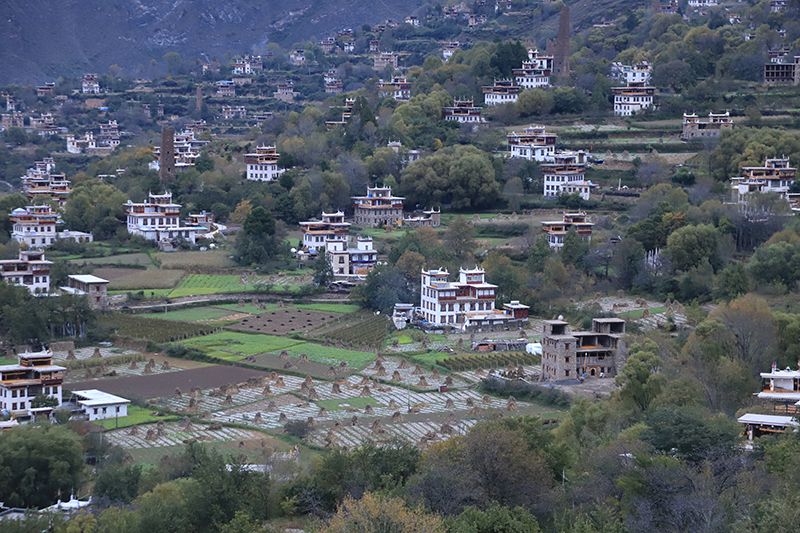 About an hour later we left the viewing area and went back to our hotel for breakfast. We offered to pay our share of the hired car fee but was turned down by the Chinese family. So far during this trip we were very blessed as we had met many nice, friendly and helpful locals.

On way to SiGuNiang Mountains

We consulted our hotel manager as to how we could get from ZhongLu village to Rilong Town at SiGuNiang Mountains. She advised us to first go back to DanBa town and then take a shared-hired-car from DanBa town to Rilong Town. The cost for two was about RMB¥140 which was much cheaper than taking the bus. The beauty of this shared-scheme was that we did not have to look for the others to share the car, it was the driver’s responsibility to source for other passengers. A bus journey from DanBa town to Rilong town would cost RMB¥100 per person as we would have to pay for the entire journey which was from DanBa to ChengDu even though we would be alighting at Rilong which was about a third of the entire journey. 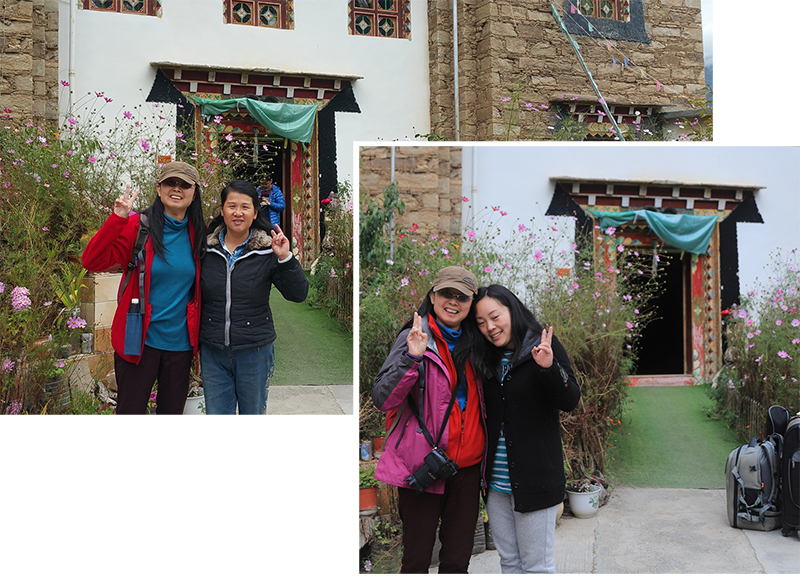 It was all planned that we would share a hired car to take us from our hotel to DanBa town at 10 am, unfortunately the driver and the car gone missing. Finally big sister Yang called up another driver. The driver came in a SUV with dramatic internal pink decor! 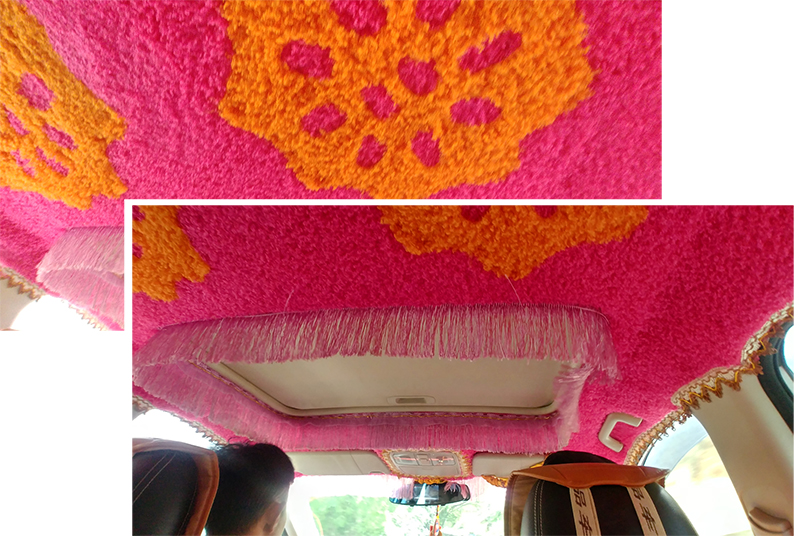 The car was new and the driver a young man. This was the first time we were in a shared-hired car. On our way to DanBa town locals would flag down the hired car and hopped in. Two young teenagers even hopped into the third row of the car sitting clamped among the luggage. The trip down to DanBa was RMB¥15 per person.

The young driver drove us to a “car for hire” carpark in DanBa and introduced us to another driver who made trip to Rilong Town. We agreed on a fee of RMB¥140 for two and climbed into the middle row of a SUV. Oh dear,  the center seat at the middle row was a seat with no back, this SUV was pretty rundown.  On the way to Rilong town, three other passengers boarded and alighted. We reached a town called XiaoJin (小金县) about an hour later where our driver met another driver. Money changed hands between the two drivers and we were told that we would have to transfer to another shared-hired car to get to Rilong town. We were rather surprised and on further questioning our first driver, he gave the excuse that he was not familiar with Rilong town. We would still pay the agreed RMB¥140 when we reached Rilong town.

We switched SUV and the “new” SUV was in a slightly  better condition than the previous one. Instead of driving toward Rilong town, our new driver looped the streets of XiaoJin town for another 30 minutes to scout for more passengers. After three more passengers came on board, our driver was finally willing to head out of town. During the journey some passengers alight and others came on board. When the SUV was fully packed it was a tight and uncomfortable squeeze for passengers on the last two rows.The best passenger seat was the one beside the driver. Now we know!

Our hotel was  not anywhere near town!

We would be staying in YunXiGu GuestHouse (小金云溪谷客栈) for four nights and based on Baidu map it seemed to be within walking distance of the town, Rilong. Since we would be here for about four and a half days we would need to go into town for meals and purchases, so staying near the town was essential.

From booking.com Yun Xi Gu Guesthouse looked unique, European country cabin style, comfortable and new and off the busy main street. This hotel would be a nice change after so many nights of local Tibetan style accommodation. 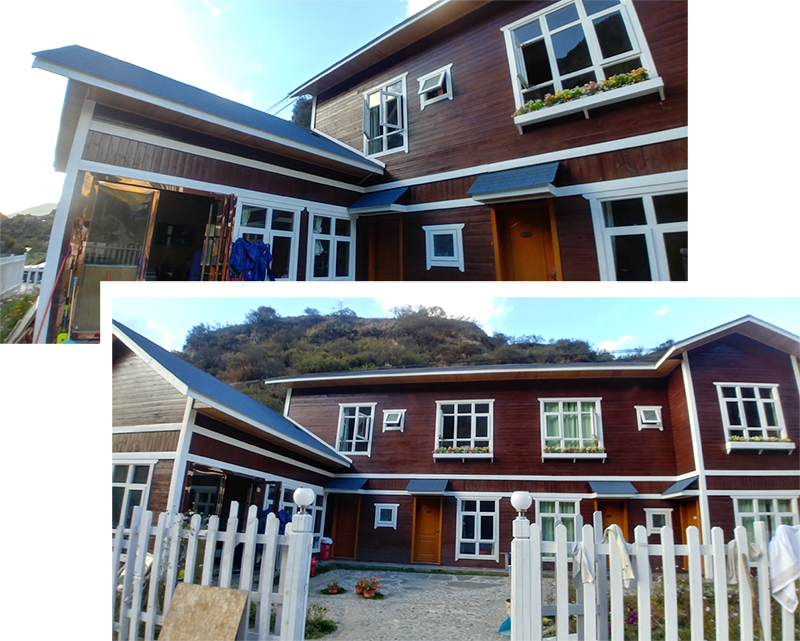 We were so surprised that when we were about to reach our guesthouse our driver drove down a steep slope into a valley. Though YunXiGu Guesthouse looked liked its picture on booking.com its surrounding was not as we expected. It would be a long km of steep uphill walk to town!

Luckily on check-in the female owner, Xiao Mei, of the guesthouse who spoke English very well, informed us that part of the “lodging” package included chauffeured (by her husband, Mr Lim) trips to and from town, to and from all the SiGuNiang scenic sight entrances, as many times a day as were needed, for customers who did not have their own vehicle. Wow, our problems were solved!

The  surrounding of YunXiGu Guesthouse was very lovely. It was in a valley of autumn colored trees with a river running by it! Beside our guesthouse there was only one other farm belonging to a brother of the Mr Lim in the valley. 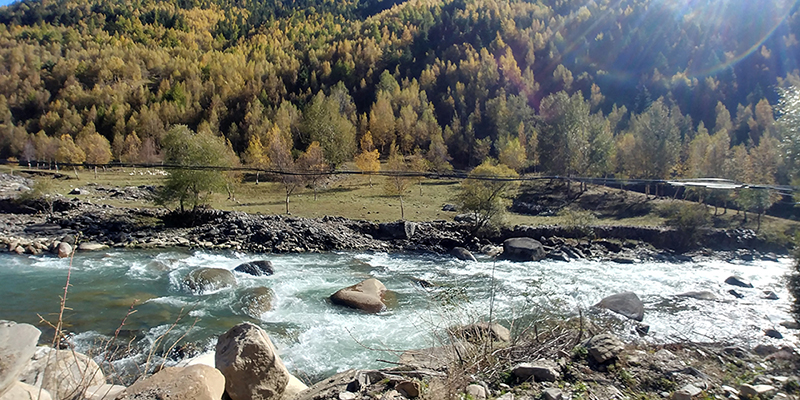 At about 6 pm we were driven into Rilong town by Mr. Lim for some shopping and dinner. The trip was accomplished in just 5 minutes. Rilong town was a main road with rows of low houses on both sides. There were many eateries/restaurants and hotels in town. This was a busy town with large and small vehicles passing through its main street. Looking at the noisy town we were glad that our hotel was in Yun Xi Gu valley. 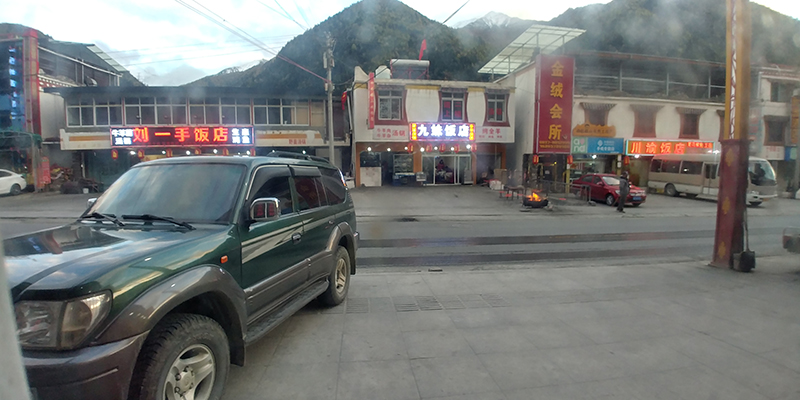 We went into a beef hot pot restaurant belonging to a older sister of Mr. Lim. The hot pot dinner was very nice, the soup was well brewed and very tasty. 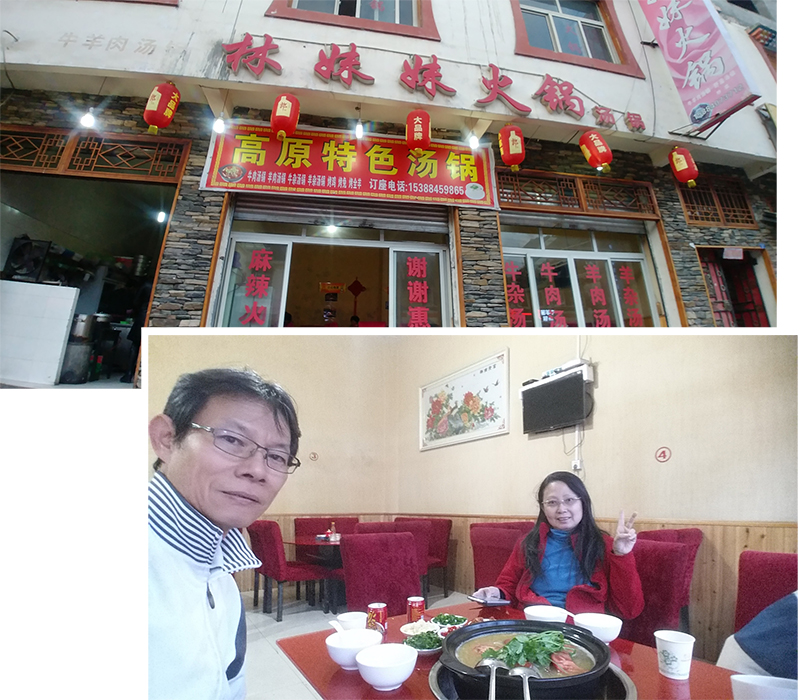 A huge beef hotpot for two

We ate and ate until we could not eat anymore and there was still so much left. The soup, the mushrooms and other ingredients were too nice to be discarded so we told Mr. Lim’s sister that we would like to do a “take away”. We got Mr. Lim to bring a pot when he came to pick us up after dinner. Together the two of us and a half filled pot of left-over rich beef soup went back to our guesthouse! At the guesthouse Xiao Mei put our pot of soup in the kitchen. We planned to cook our instant noodle in it for breakfast the next day! 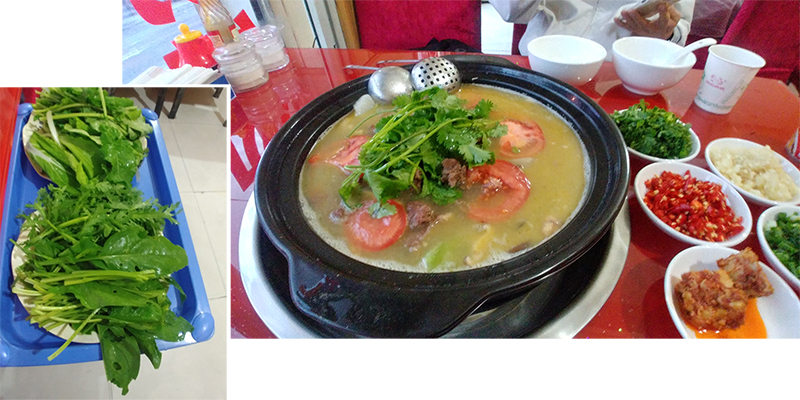 Our double room was on the ground level of Yun Xi Gu Guesthouse. It was smaller than my expectation. It had an ensuite toilet. The guesthouse was very new and according to Mr. Lim opened only in June this year. The entire place was very clean. The room did not have a warm air conditioner, it had two bed warmers which would keep us warm. 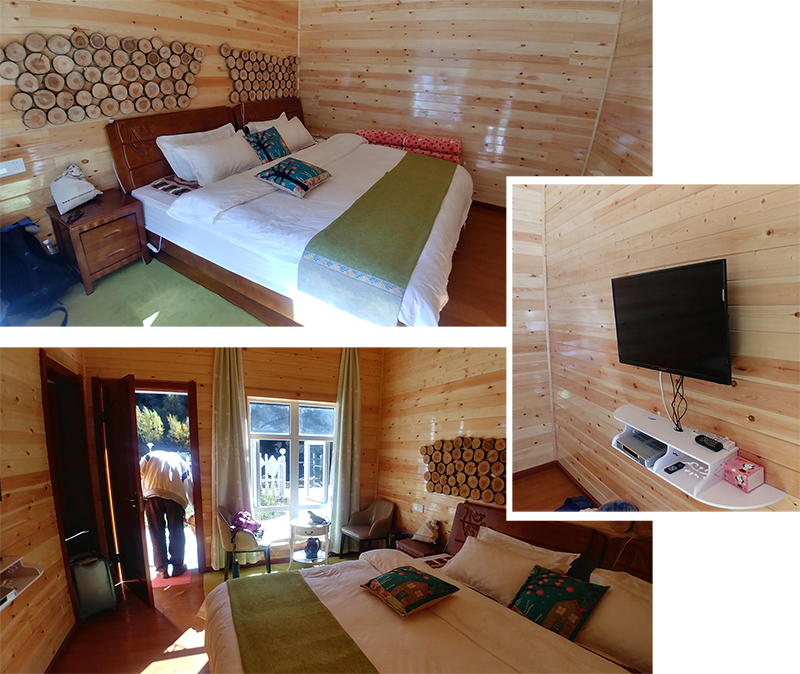 Our double room at YunXiGu GuestHouse

I should booked a bigger room because to stay here for four nights a larger place would certainly be more comfortable. Unfortunately when I reserving the room at Booking.com I looked at the wrong picture and thought  the room was large enough. The cost for four nights was RMB¥564 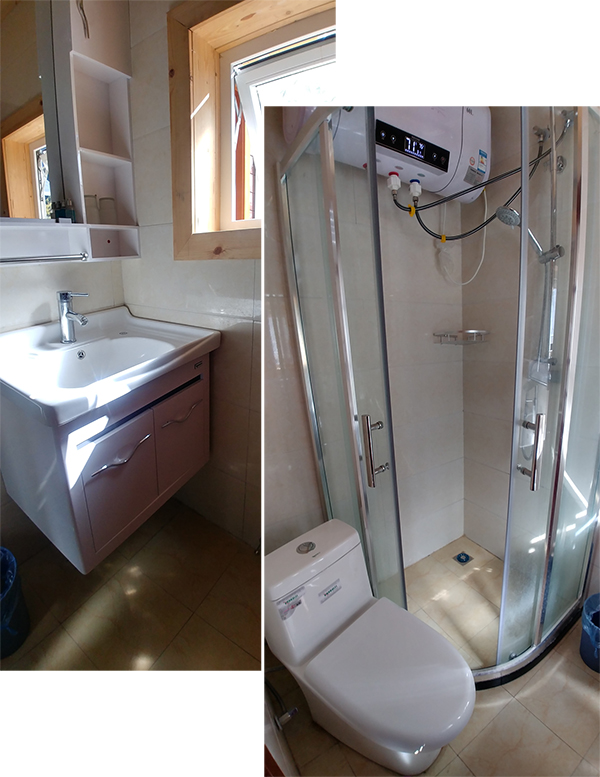