For the day we planned to explore ChangPing Valley. 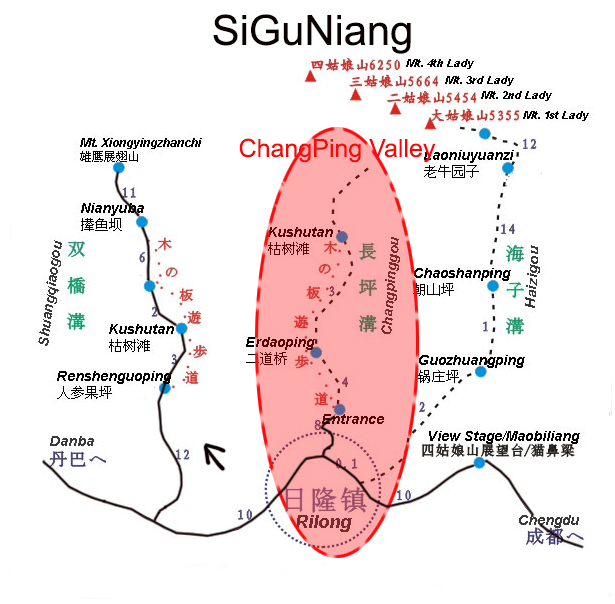 We left our guesthouse at about 9.30 am and was at ChangPing Valley Scenic Reserve carpark in less than 10 minutes. The carpark was about 3 km from our guesthouse, it was located just outside Rilong Town. 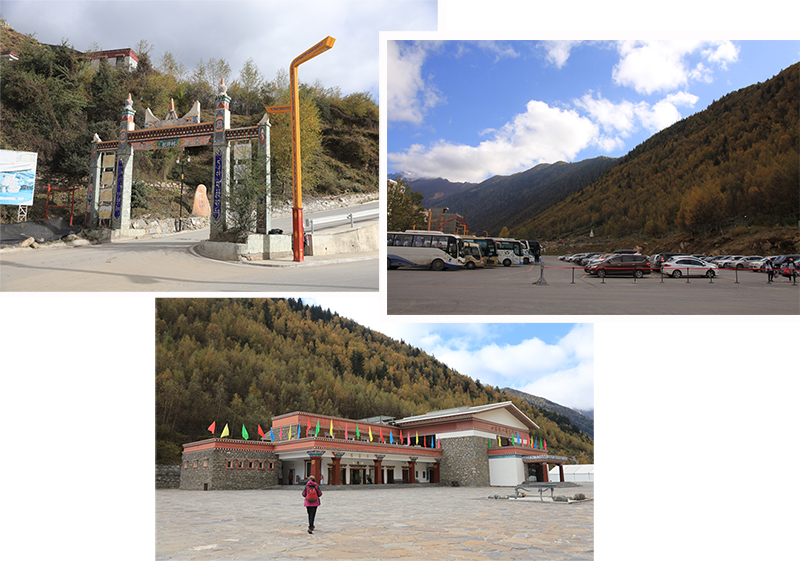 It was a very quiet morning and there was hardly any body around but us. We bought our tickets (RMB ¥90 per person) and walked to the bus bay to wait for a tourist bus. Soon a big green bus drove in and we boarded it. The bus drove inland for about 8 km where we alighted at the entrance to ChangPing scenic sites.

The “Si” in SiGuNiang Mountains meant “four” in Chinese and “GuNiang” meant maiden, so SiGuNiang Mountains referred to four maiden peaks (mountain). Just outside the entrance to the scenic sites we could see one high white peak prominently. According to the signboard that white peak was DaFeng the “Eldest Maiden Peak”. The other three peaks were not listed on the signboard so they must be not in view. The names of the rest of the maiden peaks were “ErFeng”, “SanFeng” and “YaoFeng” where “Er” meant 2nd, “San” meant 3rd and “Yao” meant last. YaoFeng was the highest among the four and its tip stood at 6250 metres making it also the second highest mountain in SiChuan Province. 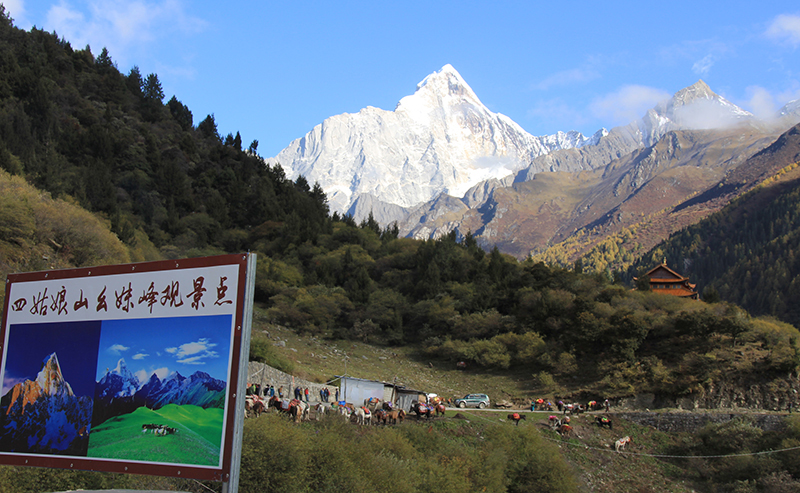 Soon after crossing the entrance we came to a “Horse” rental hut. These were Tibetan horses which were small in size. Many locals were calling out to us to take up a horse ride. Each horse would be guided by a local into the forested area of ChangPing Valley. Those who did not want the ride could proceed into the valley forest on a boardwalk. 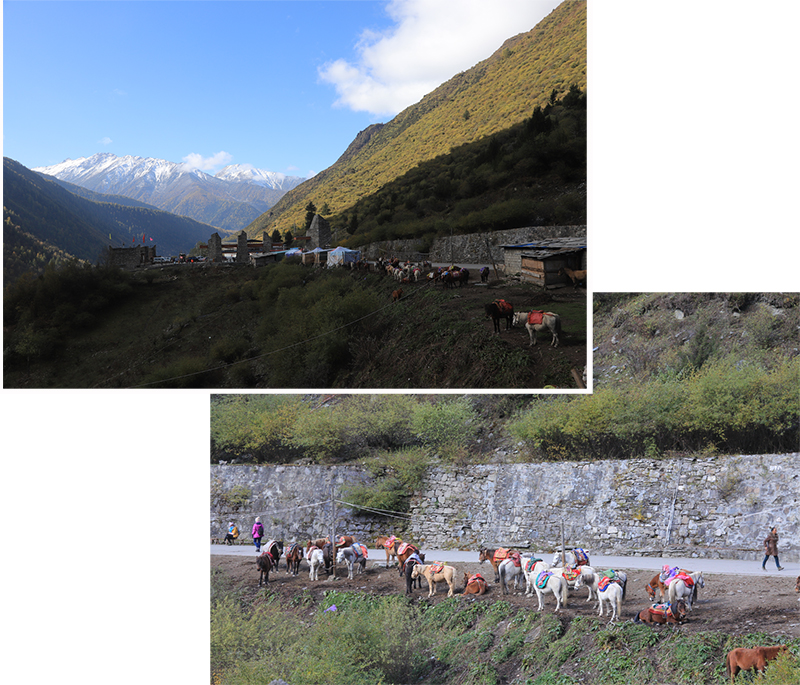 We would rather walk than ride. So we walked on ahead and came to a Tibetan temple, Lama Temple (喇嘛寺). The temple was opened to visitors but no photography was allowed once we stepped into the temple ground. We did not see any monks but could hear them chanting in the upper floors of the temple. 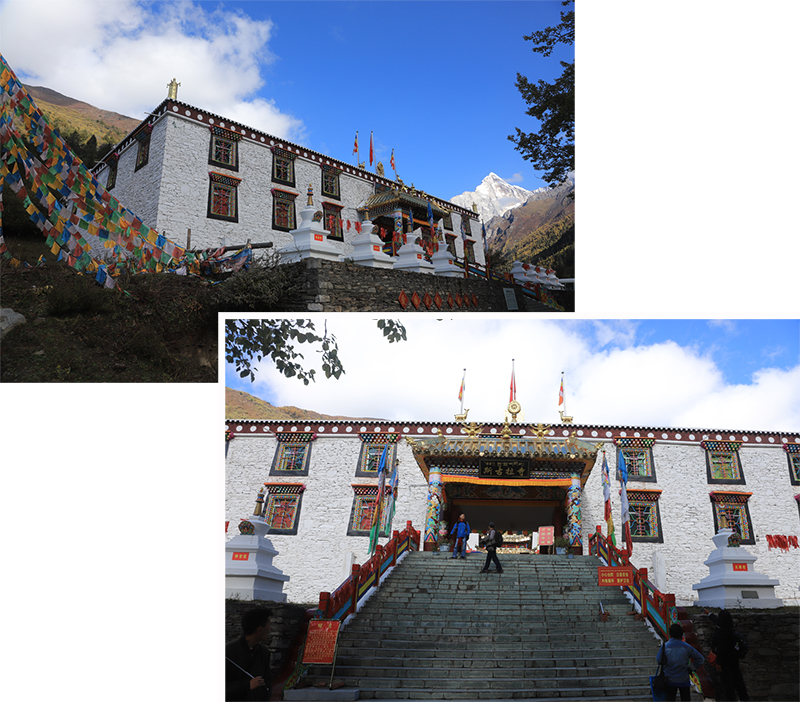 Lama Temple was first built in the 15th Century, in the past it was an important religious place of worship and housed over 1000 monks. It was destroyed during the red army revolution. The structures we saw today were rebuilt to encourage tourism to this area and to help tourists understand the Tibetan culture. 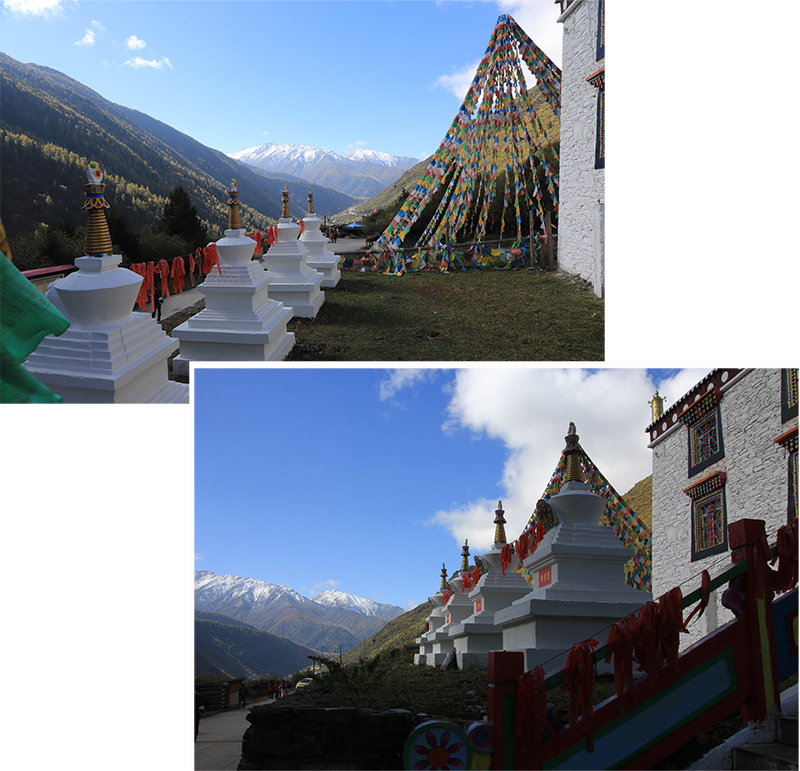 After the temple was the start of the boardwalk. It was steps and steps, down and down the stairs went. We had just began our boardwalk and already we saw tourists returning from their walk, we wondered how early did they came this morning. There was one particular lady clinging onto the wooden railing of the stairs dragging herself up one step at a time. Seeing that worried us. Would that be our physical conditions on the return? 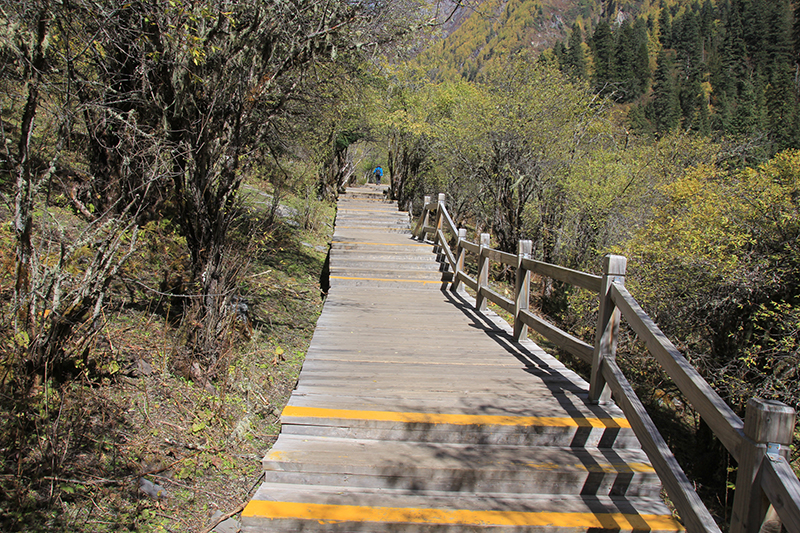 Boardwalk in ChangPing Valley of SiGuNiang

We had no idea how long we would need to walk to reach somewhere. There was so signboard or map. Walking into the valley was mainly going down steps, all around were trees and bushes, nothing interesting. We caught a glimpse of a river further down the slope by the side of the steps but it was too far to be seen properly. After some distance the steps brought us nearer to the river and there was a viewing deck that jugged out over the water. 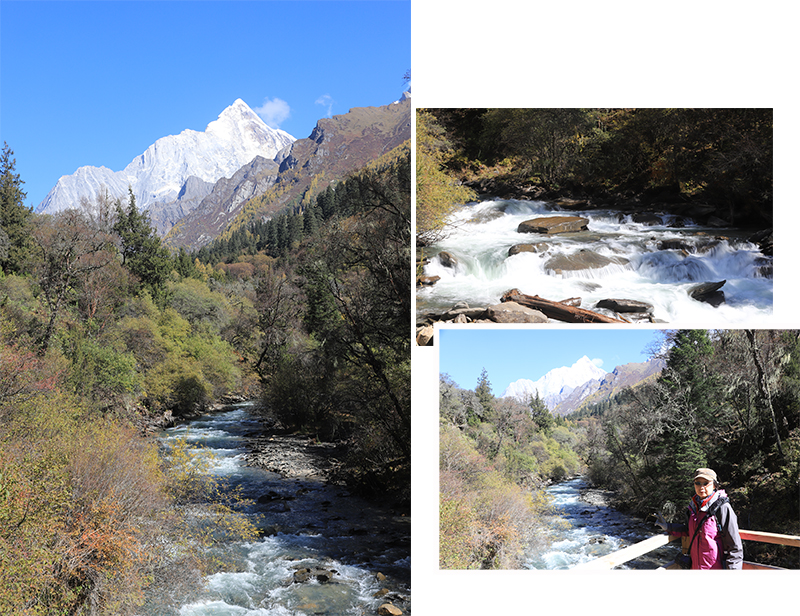 A viewing deck over the river

Many visitors was crowding onto the deck to get a good shot of the river with Dafeng Peak as the background.  We too had to quickly take a couple of shots and leave the deck to get out of the way for others to come in. We proceeded onward and came to a “square”, at the square there was a tiny shop selling beverages and two paths beside it. One led upward towards a waterfall ChongChongJiao Waterfall (虫虫脚瀑布) and the other led further into the valley. 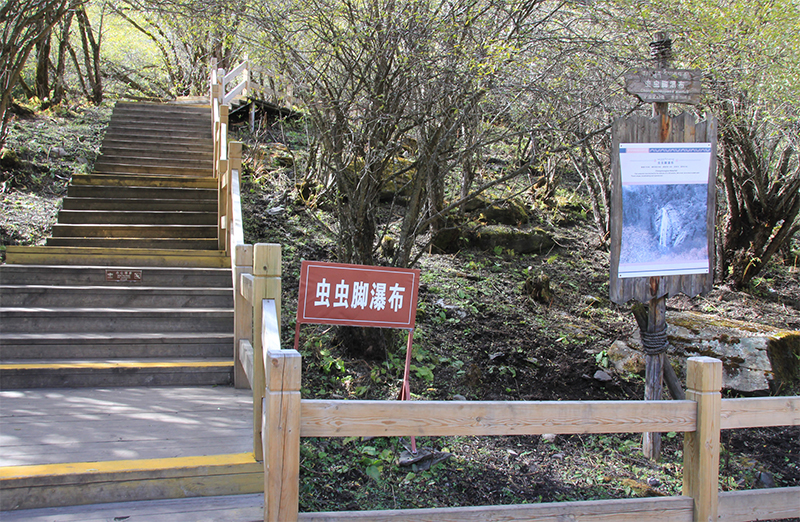 Steps up to ChongChongJiao waterfall 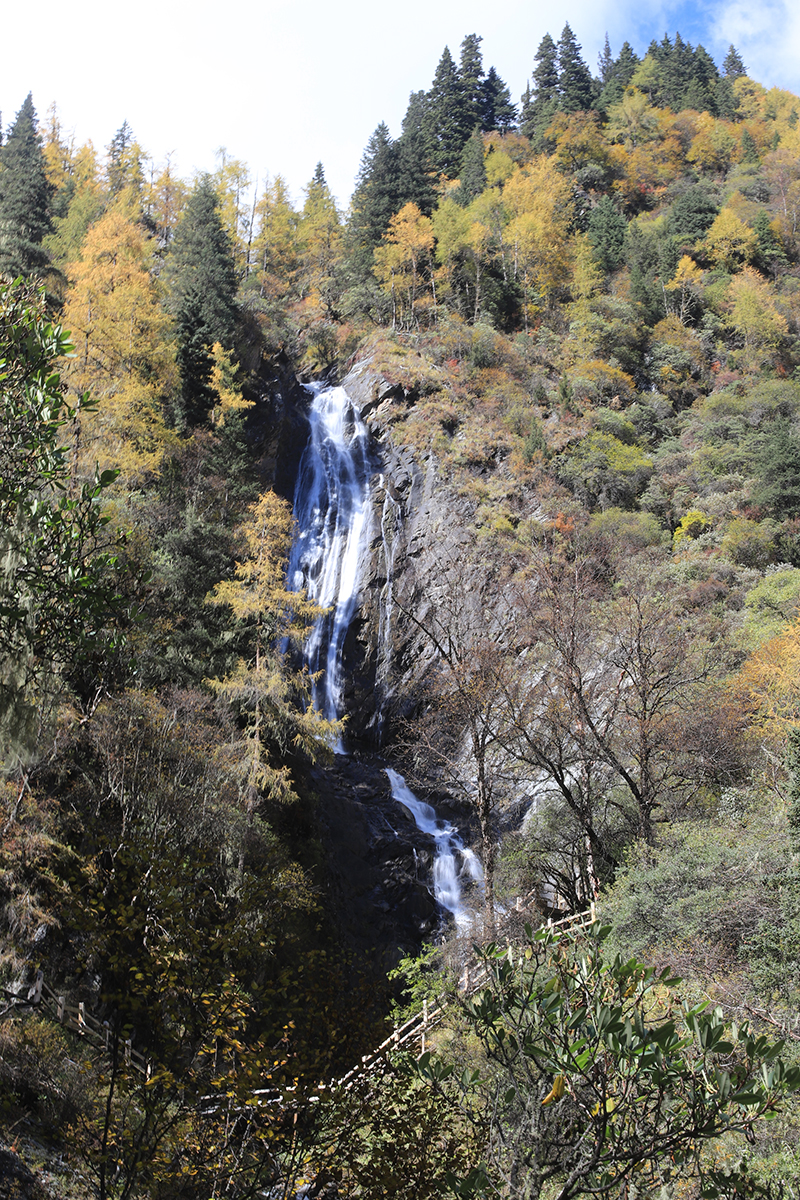 After climbing up some more steps we came to a viewing deck with a view of the fall. ChongChongJiao Waterfall was not a big waterfall, neither was it a small fall like its Chinese name suggested. ChongChongJiao (虫虫脚瀑布) meant “bug feet” waterfall. Though there were more steps leading further up, its entrance was barricaded so we could not proceed on.

Soon we were back on the other path that led further into the valley. We stopped at a wooden shade for lunch that we had packed. In the shade was a Chinese woman, her brother and her mum and during our conversation with them we found out that we had only completed half the distance to a lake. So far excluding the detour to the waterfall we had been walking for about an hour. Which meant we need another hour to reach the lake and another two to return to the entrance. We figured we still had enough time so immediately after lunch we proceeded on into the valley. The boardwalk led to a bridge that spanned across a river after which it joined a stairs that went upward on the other side of the river. 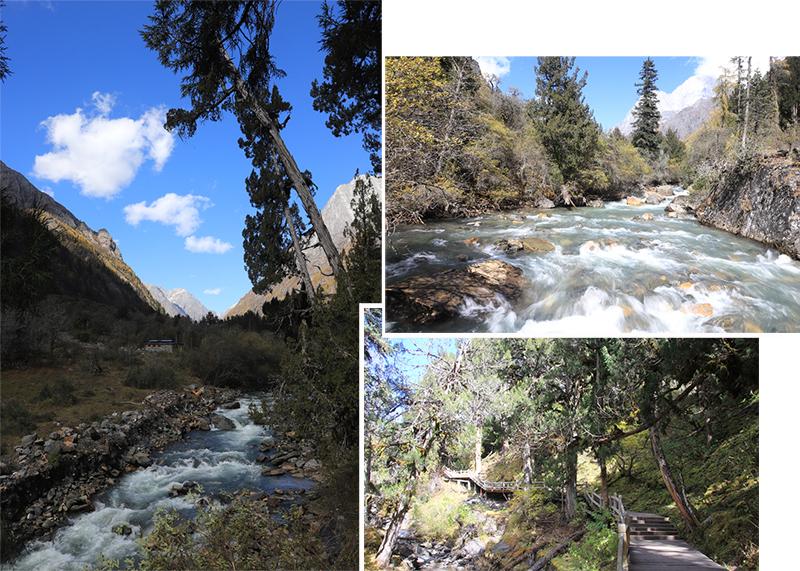 Upstream and downstream scenery on the bridge

Standing in the middle of the bridge we found the upstream and downstream views rather pretty. The bridge was a nice stop to enjoy the scenery especially with no other people crowding around me.

We continued our walk up the stairs and after a few minutes we spotted several horses tied to trees beside the boardwalk. We had arrived at the end of the “horse” trail. Throughout our walk we did not spot those visitors who took the horse ride so they apparently reached here via another route. 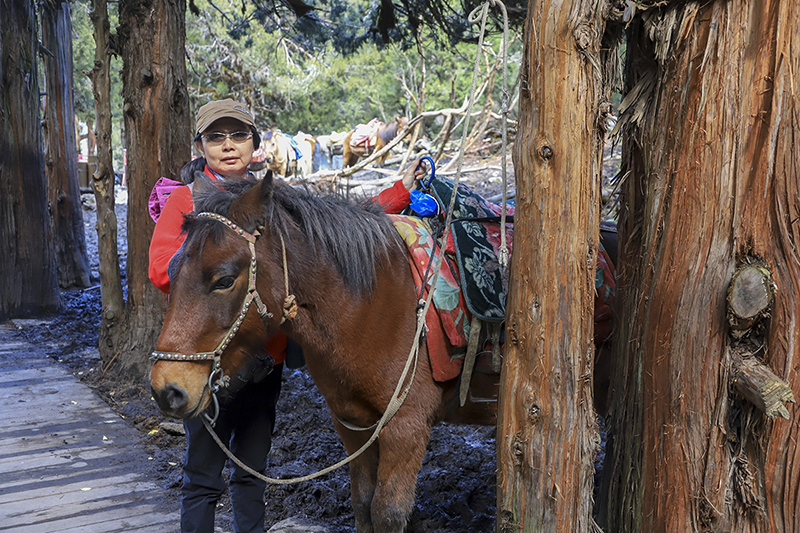 The boardwalk and the horse-ride route merged near the lake. The view at the lake was very beautiful, bright blue sky, snow mountain, yellow and green trees. We were now at the KuShuTan (枯树滩) which meant “dead tree beach” in Chinese. 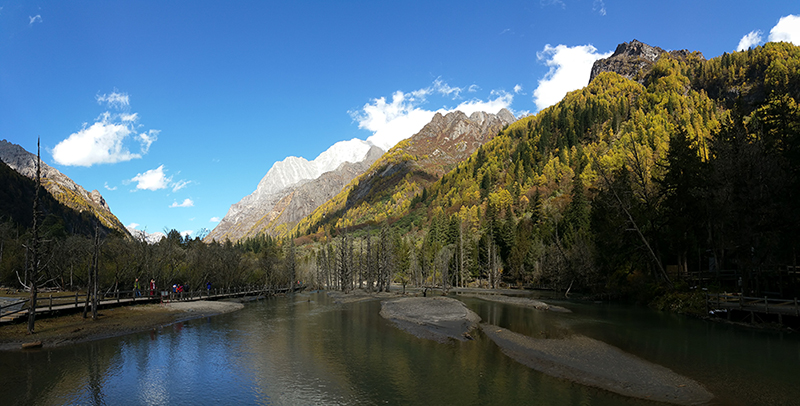 The boardwalk extended beyond the lake going further into the valley towards the snow mountains. We walked till we reach a group of dead trees and decided not to proceed. We saw several hikers with hiking sticks and huge backpacks gathering on one section of the boardwalk, they looked like they were on a multi-days trekking expedition. 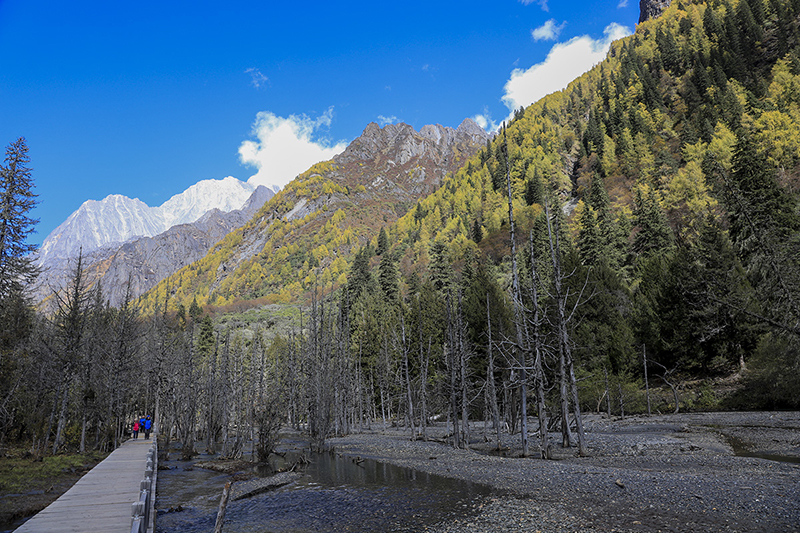 We turned back after KuShuTan and trekked back to the starting point of the boardwalk. Going back was faster as we were no longer stopping for photo shoot.  At about 3 pm we were back at Lama Temple. The time taken to trek from KuShuTan to the Lama Temple was about 1.25 hour.

After a long and tiring day we decided to eat our dinner at YunXiGu Guesthouse, this would gave us enough time for a good rest before and after dinner. We ordered an entire BBQ chicken for dinner and was eagerly waiting for it. We were very deprived of meat during this trip. From our room window we could see the elder Mrs. Li BBQ-ing our chicken over a low charcoal fire for hours.

When we sat down to eat our “big” chicken we were so surprise! 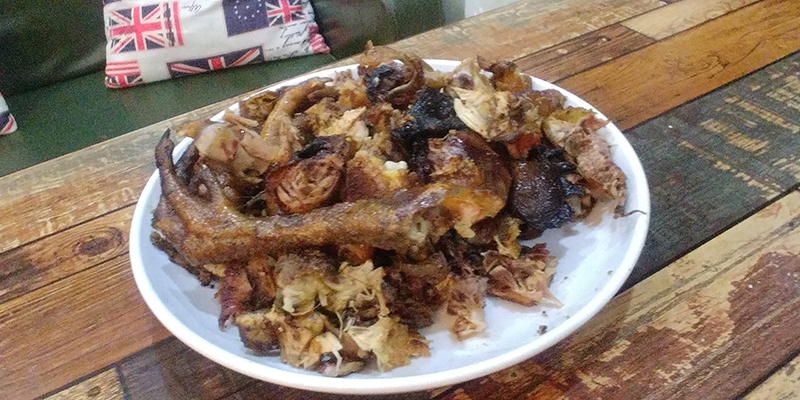 The big chicken was so skinny! It was all bones and skins and not enough for the two of us. The chicken costed RMB¥150, was pretty expensive but a standard price among the restaurants in RiLong town.