We had planned for four nights stay at YunXiGu Guesthouse in RiLong Town, so that the 2nd, 3rd and 4th days were full days which would give us ample times to explore the valleys of SiGuNiang Mountains.  In our plan was to explore ShuangQiao and ChangPing Valleys, as for HaiZi Valley, it was a “not sure” item. 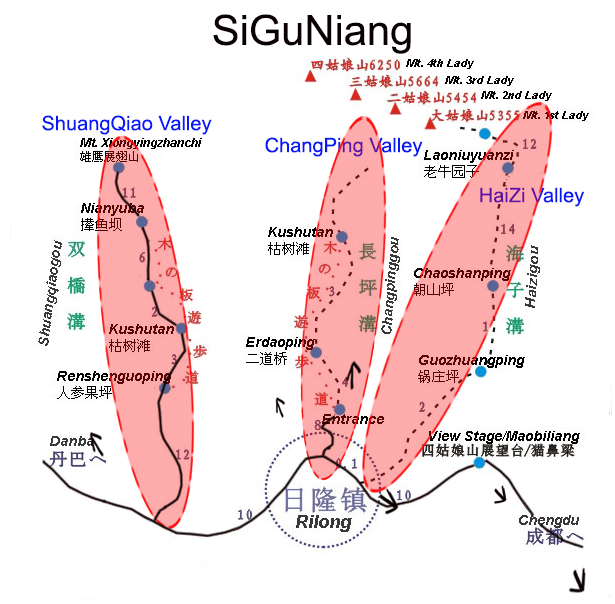 We had trekked ShuangQiao Valley on the 2nd Day, and ChangPing Valley of the 3rd day. On this day which was the 4th day we decided to take it easy and relax at our guesthouse.

Our thought of trekking HaiZi valley evaporated once we were told that there was no tourist bus at the entrance of HaiZi valley that would bring us to the sightseeing spots. It would be trekking kilometers from one view point to another. XiaoMei told us that the first stretch would be a 2 to 3 hours trek to ChaoShanPing (朝山坪) where we would see the four peaks of SiGuNiang.

By the end of the day
We had a wonderful relaxing day. A day of catching up on our social media, internet reading, chit chatting with friends and family via the internet. It was nice not to have a care at all, not to watch out for the time, not to catch the bus etc etc.  A relaxing day after two days of sightseeing and trekking was rejuvenating!

Relaxing in our Guesthouse

This morning we woke up late, had an hour of extra sleep. Breakfast was cup noodle with cup coffee. Unfortunately there was no meat to go along with our noodle. The stores at RiLong Town did not carry any canned meat. 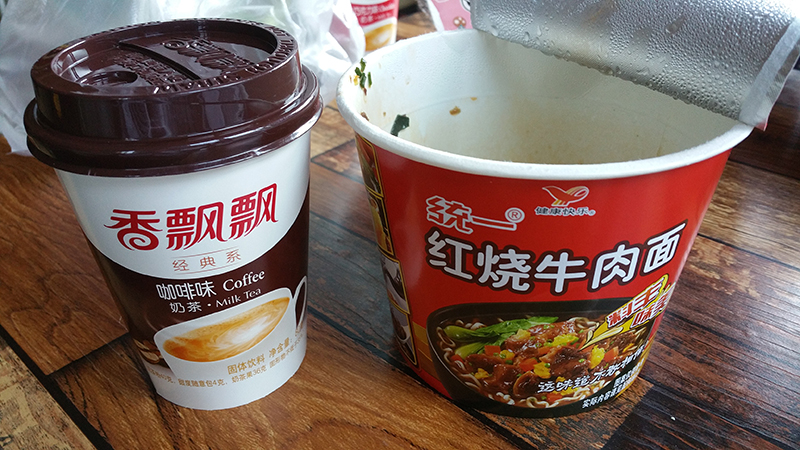 After breakfast we decided to relocate to the guesthouse dining/sitting room to spend the rest of the day. It was definitely more spacious and comfortable than the tiny “sitting” area we had in our room.

It was quite nice in the dining/sitting room except on occasions when the elder Mr. Li started to puff his cigarette. We started a conversation with elder Mr. Li and his wife and found out that they had three sons. The oldest son worked in ChengDu, this guesthouse owner was their middle son and their youngest son stayed somewhere in town. They did not have a daughter! 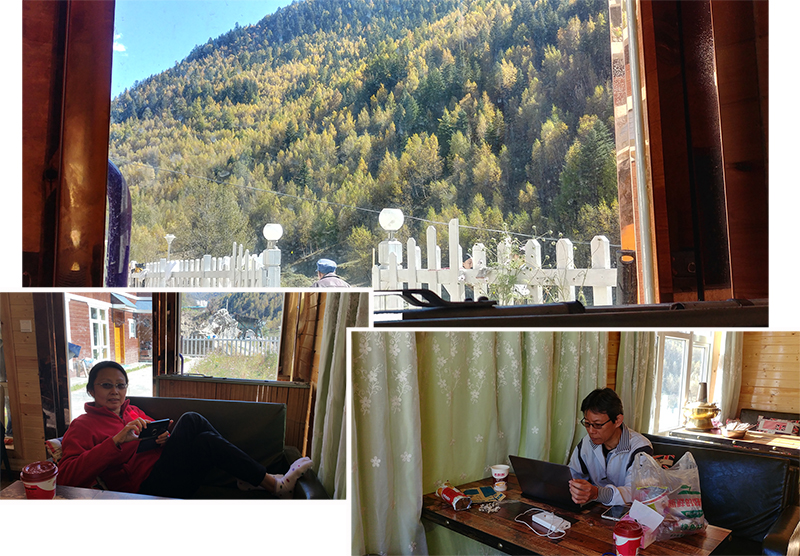 Now we were confused, we thought the hotpot beef restaurant in RiLong town where we had our dinner on the first evening belonged to Mr. Li’s elder sister?  How about the farm that was just 200 meters from this guesthouse? Mr. Li told us that his older was living there and running the farm. But the old couple just said their eldest son worked in ChengDu. So elder sister or brother did not mean real sister or brother?

I had always wanted to explore YunXiGu valley, the valley where our guesthouse was located. So at 3 pm we walked down the driveway of our guesthouse. At the other end of the driveway was a gate, after the gate was a farm. This was the farm that belonged to Mr. Li’s “older brother”. After the farm was a bridge that spanned the river. 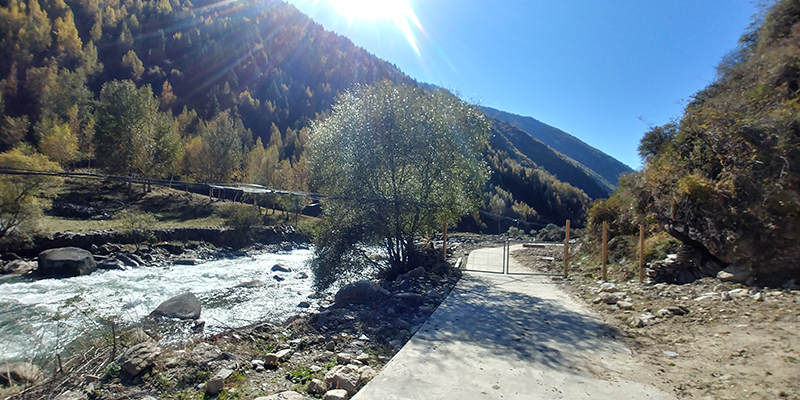 Gate at the end of YunXiGu Guesthouse driveway

We crossed the bridge and came to a makeshift gate. The gate was “locked” in  place by a tree branch. To open the gate we needed to slot the branch out of two loops, one on each side of the gate before we could “swing” open the gate and get through. Our “breaking” in was observed by many pair of eyes. 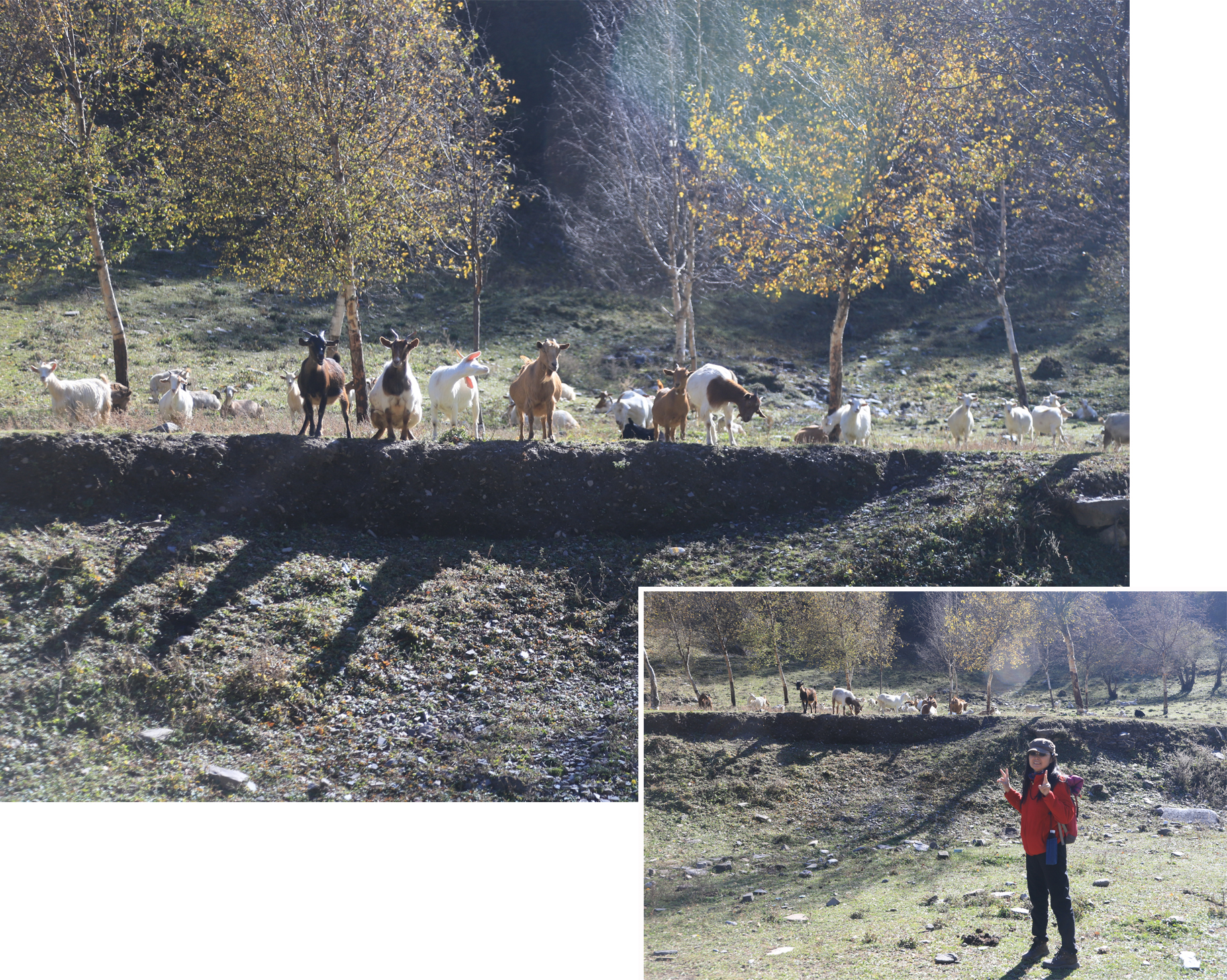 The goats were curiously eyeing us

The land across the bridge was the glazing land of several goats belonging to Mr. Li’s older brother. They were not aggressive but very curiously and shy animals. They stood in a row staring at our “breaking in” into their territory. But when we walked nearer to photography them they shyly turned away. Soon after, their curiously peaked again and we found them cautiously following us. 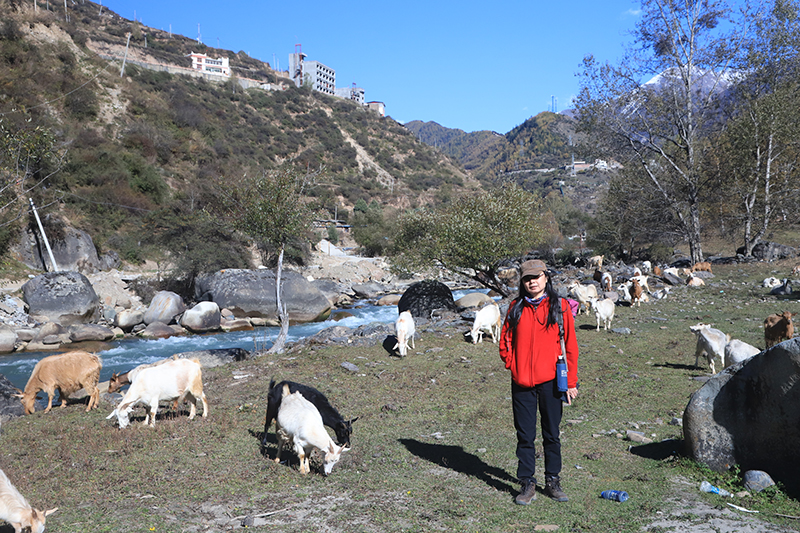 The goats were discreetly following us

The valley was very nice, just like some hotels that had their private beach fronts, YunXiGu Guesthouse had a private valley.  A small piece of paradise just for the occupants of the guesthouse! 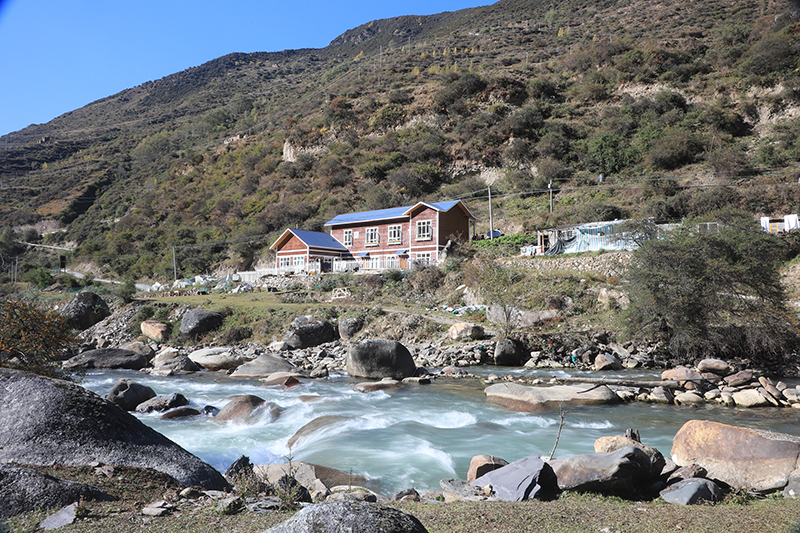 YunXiGu Guesthouse as seen from across the river

We went into town to have dinner. Our dinner at a nice looking restaurant costed only RMB¥ 84. It was a simple meal. 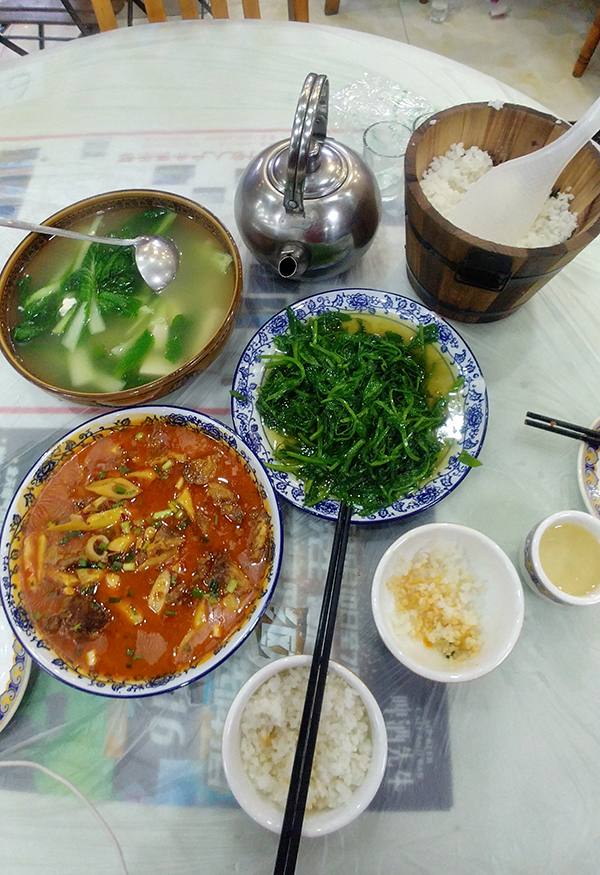 After the meal while we were waiting by the side of the road for Mr. Li to pick us up the town went into a blackout. All the lights was off. But gradually the lights of one shop at a time came on, probably lighted up by generators. Our very first “black out” in SiChuan! 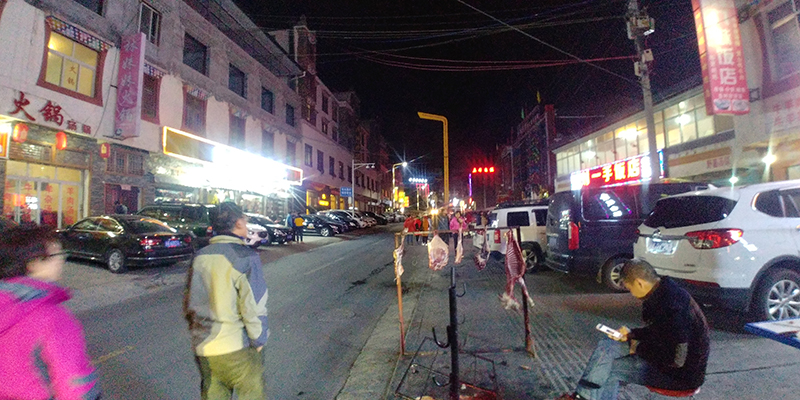 The “blackout street” of RiLong Town