This day was our last full day in ChengDu and we still had a final sightseeing destination, JinLin Ancient Street (锦里古街), to visit. JinLin Ancient Street was about 3 km from our hotel. We could either go there by bus or take a slow walk to the ancient street. We felt that the best time to visit the ancient street would be at about 4 pm, at that time we could see the street in daylight and as we stay  till night fall we would be able to see the street in night light. 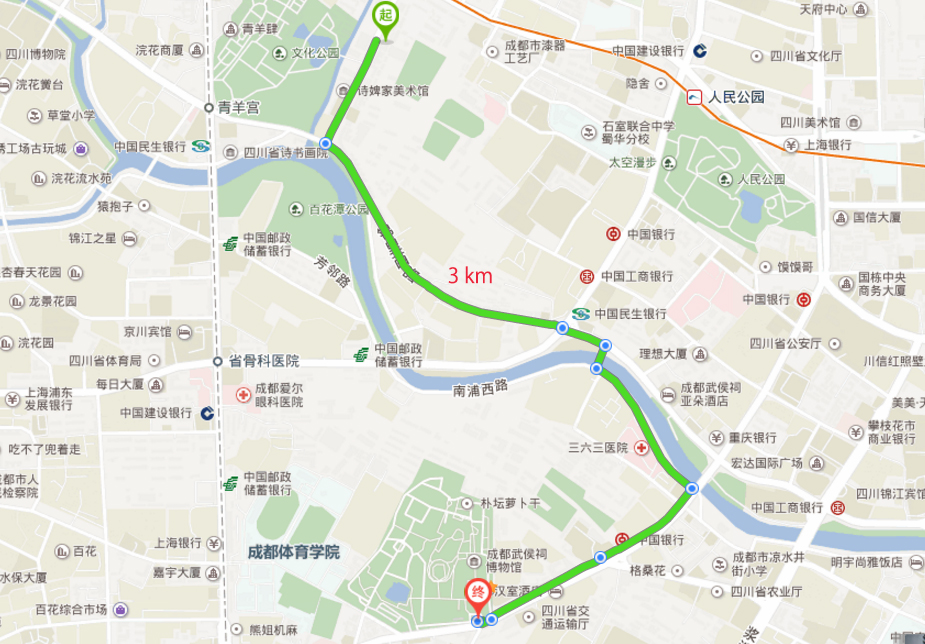 By the end of the day
We were too bored doing nothing in our hotel room so even though it was raining we ventured out at about 10.30 am to the “world largest  mall”, New Century Global Center (新世纪环球中心). We were certainly impressed with the mall not because of its shops but more because of the water theme park and resort housed in the mall. We loitered in the mall till about 2 pm before we set off to JinLi Ancient Street. JinLi Ancient Street was all about old traditional buildings, well preserved and maintained, serving as tea houses, restaurants, shops and stalls for locals and tourists. Though JinLi Ancient Street  was the third ancient street/town we visited in three days, though it was similar to the other ancient streets/towns we were not bored seeing the same “stuff”. The vibrant energy in the air of these places were so captivating.

At the second breakfast in our hotel, I tried picking dishes that I had not eaten the day before so that they would taste less boring to me. By now I ate breakfast just for the energy it would give me and not because it tasted delicious. Somehow SiChuan breakfast and “me” were just not “best friends” 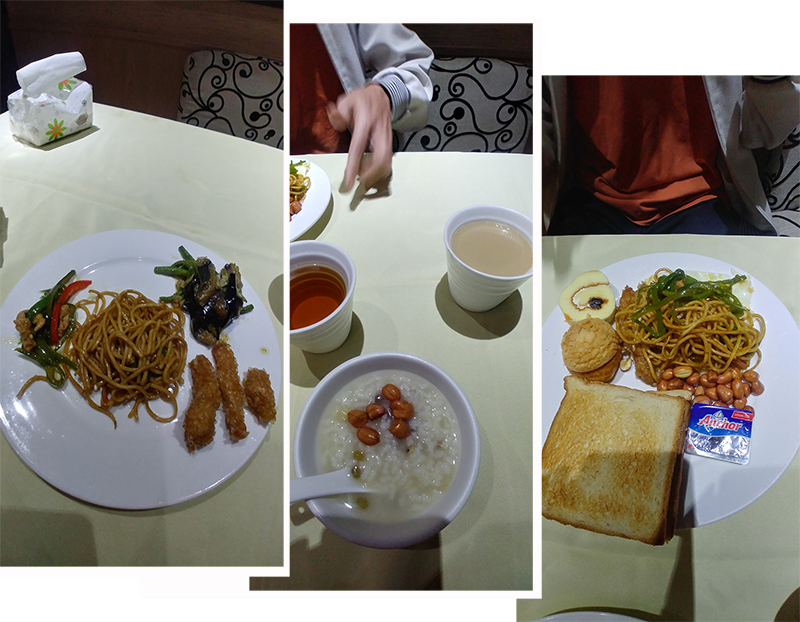 Using BaiDu map we plotted our route to New Century Global Center (新世纪环球中心). The way there was pretty straight forward. From our hotel we walked about 300 metre to TongHuiMeng station (通惠门站) and boarded subway train Line 2 and after two stops we changed to Line 1 and went for another 10 stops and alighted at JinCheng Plaza (锦城广场) station 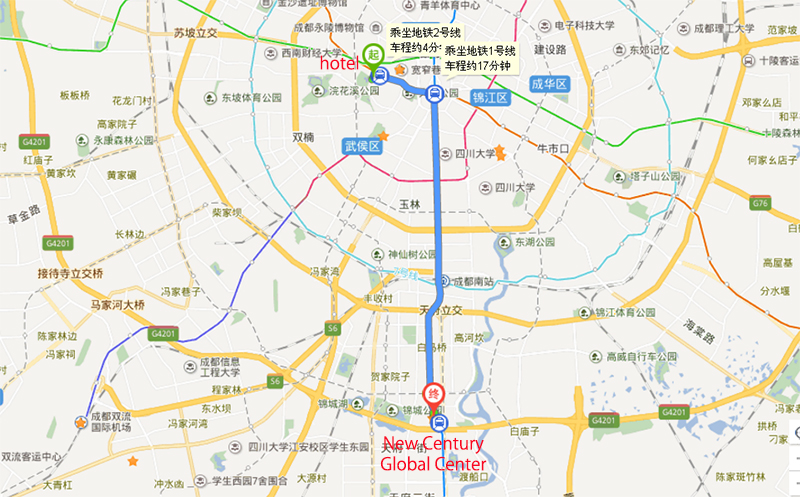 From the underground station we walked up to the road level and immediately we spotted the New Century Global Center right in front of us.  The entire journey including walking from our hotel to TongHuiMeng Station took about 50 minutes. Though it was raining it was okay once we got into the subway station. Similarly at destination we only needed to walk a short distance to the mall. So we were in the rain only for a short time.

The mall was indeed very huge. It had a floor space of 18 million square feet. We had also read that it had an artificial beach in the mall, that we must see! 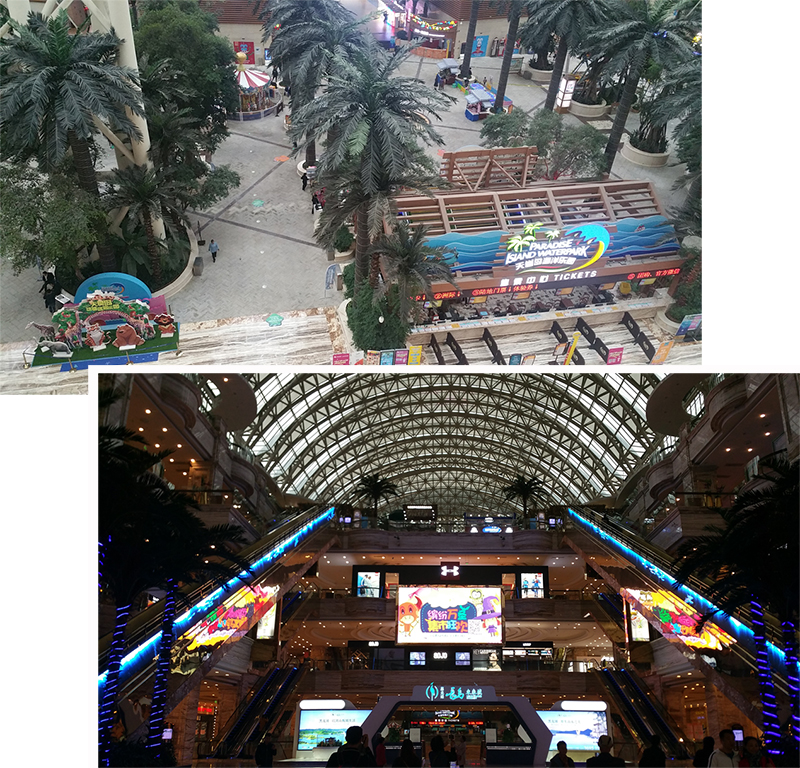 The interior of the malls

The mall interior was very nice, lots of wide spaces not clutter at all. We like the high ceiling and the skylight which gave its interiors plentiful of natural light. The place was not crowded probably because it was too early or because it was a weekday. We walked from shop to shop and many were selling branded goods. The only interesting place on the upper floor was a transparent bridge on the fourth level. Too bad the glass floor was already badly scratched from all the human traffic that had crossed it. So the view below our feet was not very clear and walking on the glass floor was not scary at all 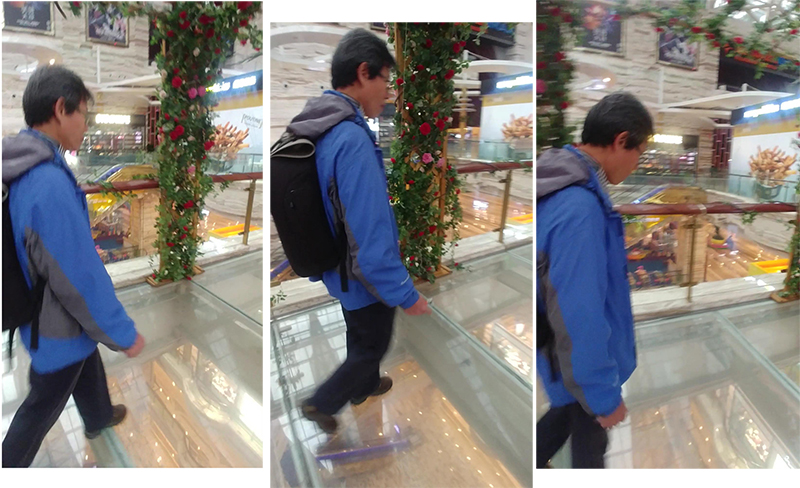 We went on to look for the artificial beach. There was a ticketing counter just before the entrance to the “beach” and we thought we had to purchase tickets to enter. But we were wrong, the ticket was probably for “rides” in the theme park. 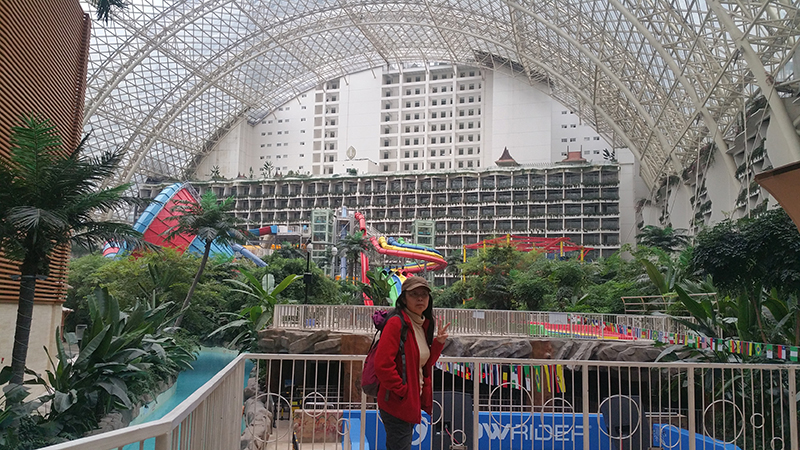 Hotel and water theme park in the mall

We could not see any swimmers/visitors in the water theme park, it looked like the theme park was not in operation. Behind the theme park was a huge resort hotel with many rooms. The rooms had huge balconies overlooking the theme park. This hotel would probably be filled only on weekends when locals come to play and because it was an indoor environment, the water at the artificial beach would not be cold at all. 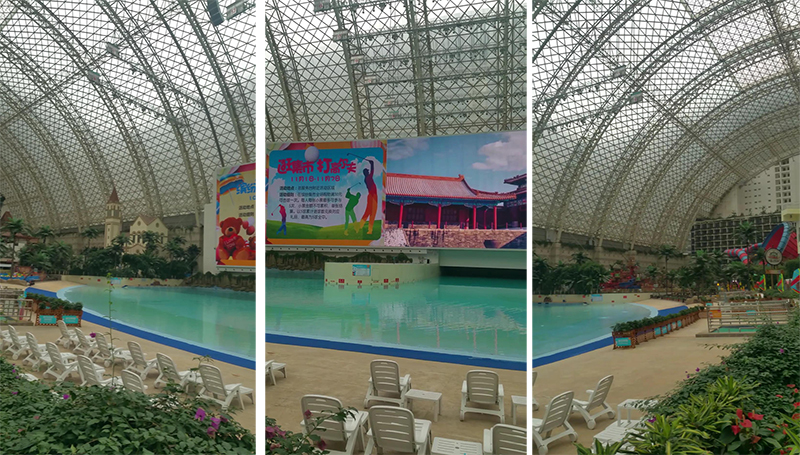 Artificial Beach in the Mall

In front of the “artificial beach” was a huge food mall selling all kinds of food. Food and fun together would certain be popular in the weekend! 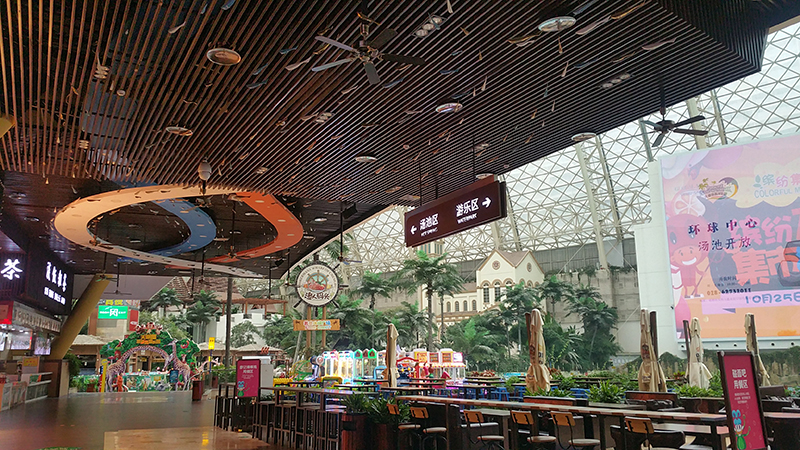 Food court in the mall

By about 2 pm we were done with the “World Largest Mall” so we moved on to JinLin Ancient Street. Again we plotted our route on BaiDu Map. We got back into the JinCheng Plaza (锦城广场) station and boarded train Line 1 and after 7 stops exited and changed to train Line 3 at Sichuan Gymnasium Station (省体育馆). On train Line 3 we went on for two stops and exited at GaoShengQiao Station (高升桥). 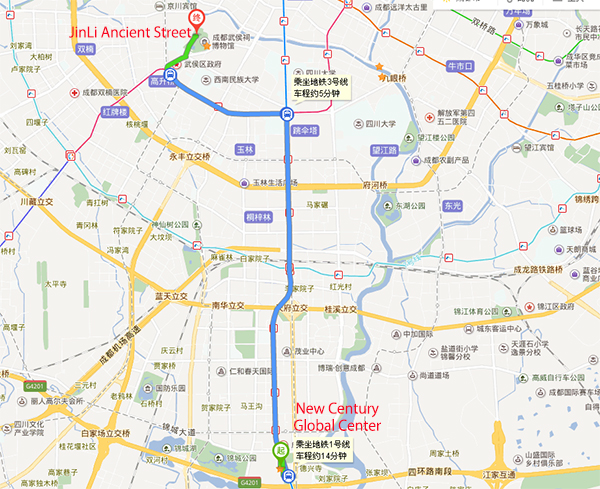 From GaoShengQiao Station we walked about 1.3 km to JinLi Ancient street. Unfortunately the rain had got heavier so the walk was not very pleasant. Just when we were near, we saw a ticketing booth selling tickets for entry through a doorway. We thought we had to purchase tickets to get into JinLi Ancient Street. But after checking we found out that the tickets were for entering into WuHou Shrine just next to JinLi Ancient Street. 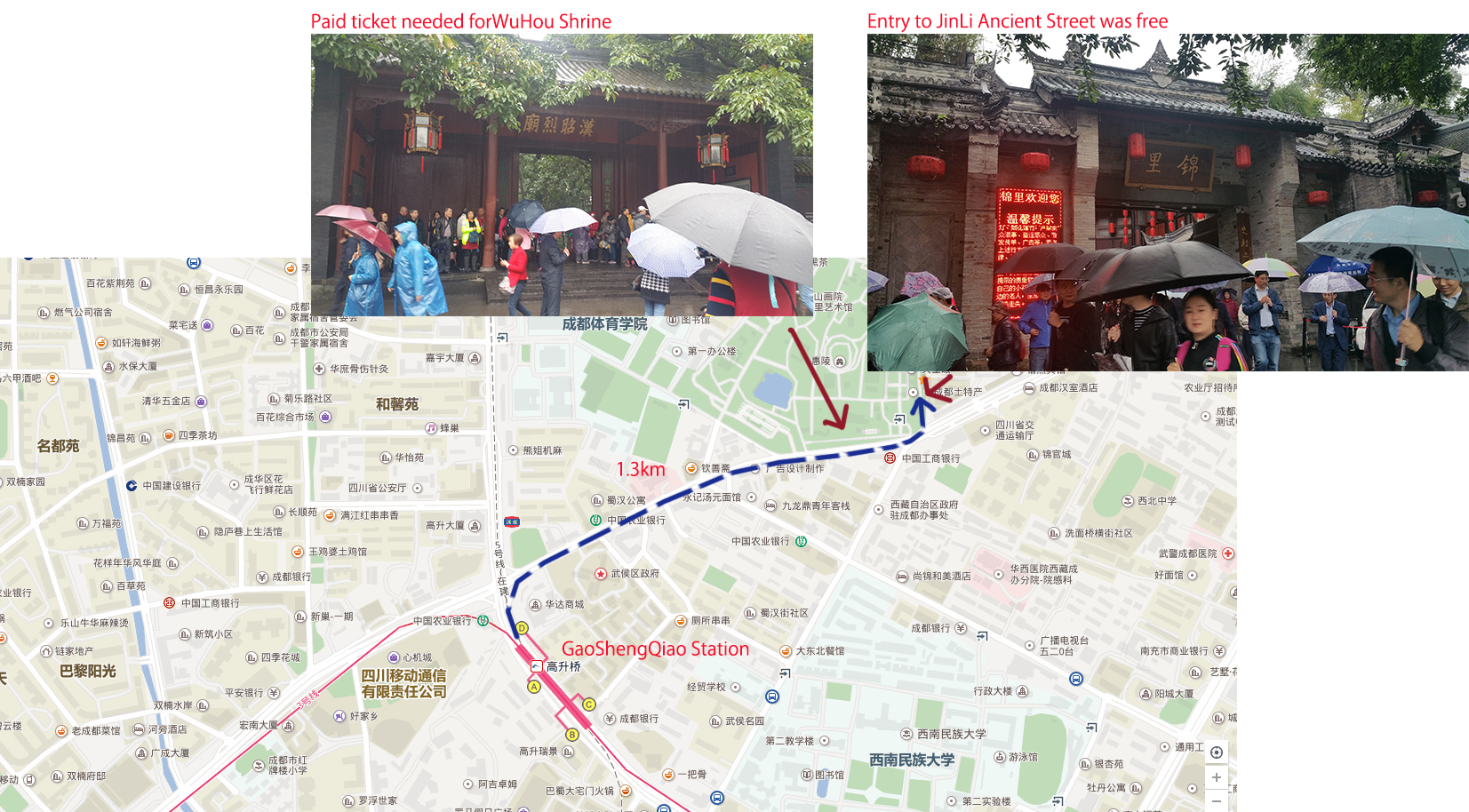 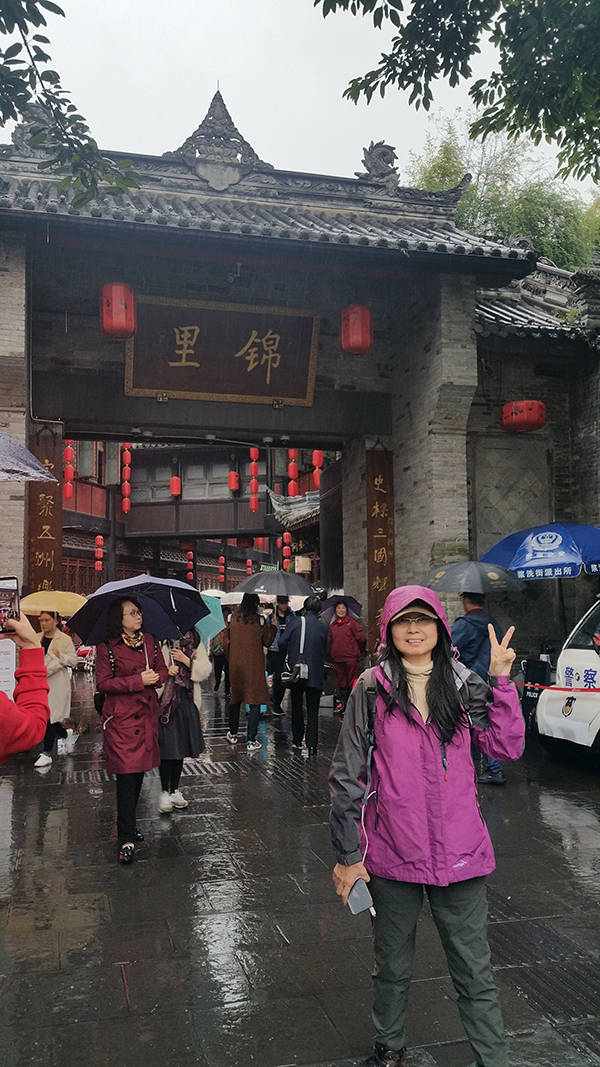 There was also a doorway into JinLi Ancient Street and no ticket was needed.

This ancient street apparently showed how SiChuan looked like during the Qing Dynasty.

The place was certainly popular with locals and tourists and even on a rainy day the place was crowded. It was difficult to take nice photos on a wet day not only did our cameras got wet we often had umbrellas blocking half the scene we were taking. Sigh…patience…patience…

Walking through the doorway we walked into a charming alley. Lanterns were stringed and dangled systematically under the eaves of the roofs.

The ancient alley was a pedestrian alley so it was off limit to vehicle.

Our stroll brought us past restaurants, tea houses, shops, bars, cafes and hotels. We tried looking for a cafe to sit down for tea and watched the people go by. But most cafes were already packed full with customers. We walked into several souvenir shops and found some interesting souvenirs to bring home for our family and friends. 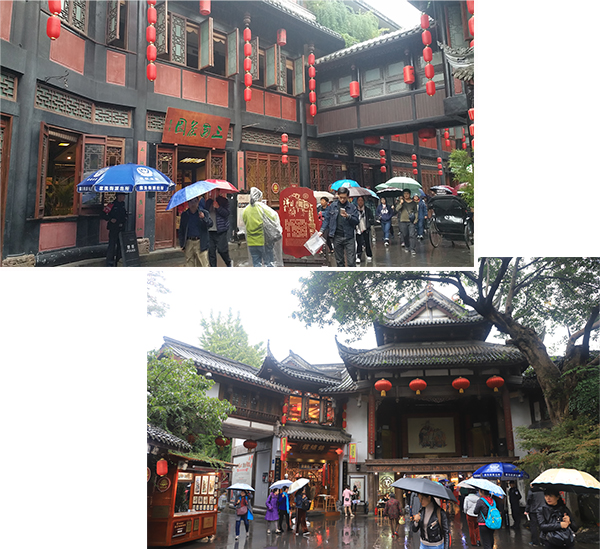 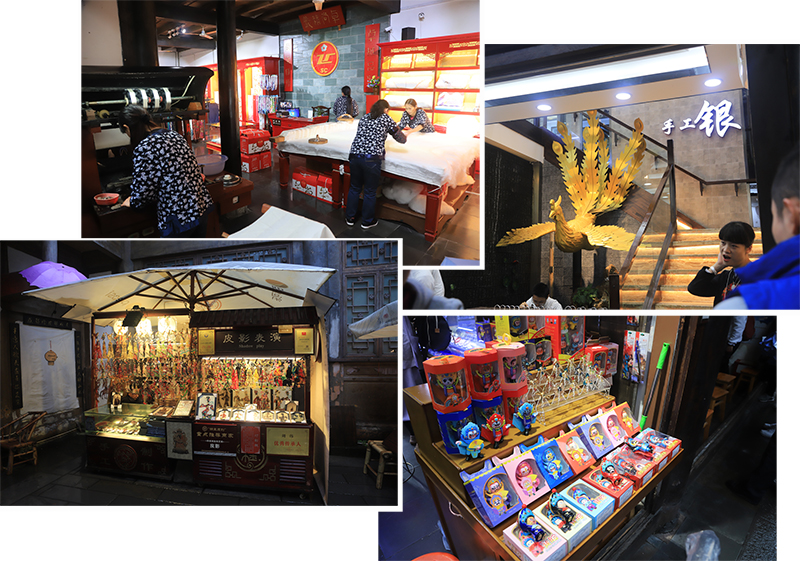 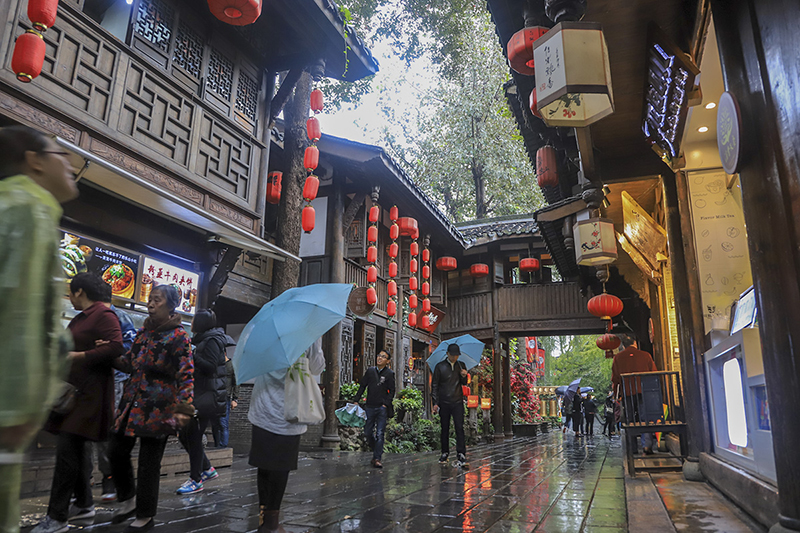 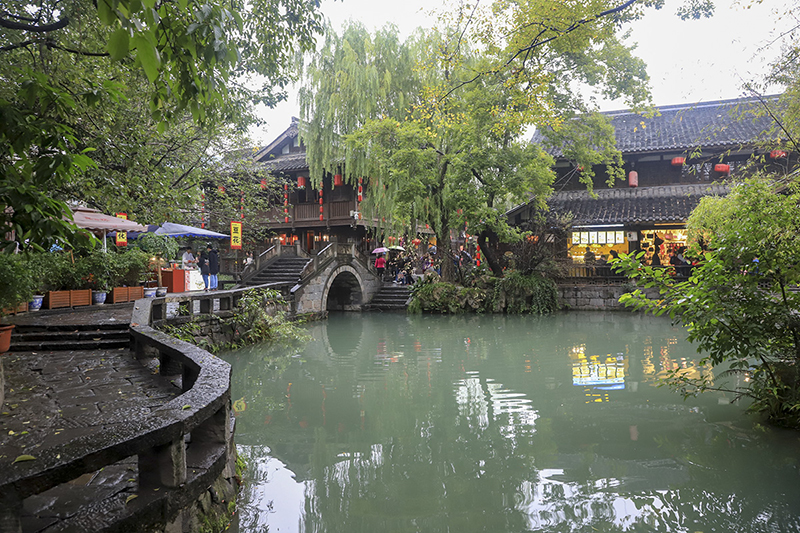 A pond in JinLi Ancient Street

This time we ordered hotpot. The hotpot came with two soups. A waitress directed us to some shelves on one side of the restaurant where there were many trays of meats and veggie skewered on long thin sticks. To cook our food we had to dip the long thin sticks holding the meat or veggie into the hot soup.

The dinner came up to about RMB ¥130 and after using our voucher we only had to pay RMB¥80. 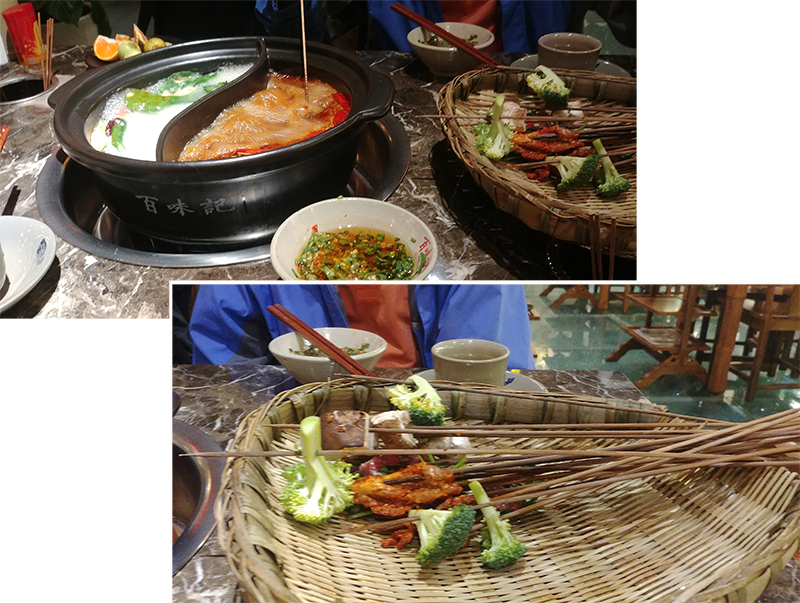 At about 7 pm the restaurant staged a performance on its stage in front. We were more interested in our food until the “Bian Lian” (变脸) came on. Wow! the performer was good. With a quick flip of his head, the mask on his face changed. He even came right up in front of Yat Thong and took Yat Thong’s hand to press his nose and the mask on his face change on the spot instantly. Even at such close range we could not see how that mask change took place! From the start to the end of his performance he changed his “face” more than 10 times.