Though our original plan was to be in Kyoto for cherry blossom, we were a week late as the “best viewing” period was 6-7 days. At that time we were in Tokyo since our flight (which was bought many months ahead) landed in Narita, it would be too costly to give up four flight tickets and several prepaid hotel bookings to reroute our trip to Kyoto.

Even without cherry blossom Kyoto still had much to offer. It was a city of great cultural and historical values. It had so many temples and shrines, many of which were declared national treasures and world heritage sites.

Today our plan was to bring mom and Lin Ying to three of the shrines/temples which were most memorable for us during our previous two visits to Kyoto. In the morning we would visit Kinakuji temple, followed by Fushimi Inari Taisha and then Kiyomizu-dera. All these temples were in the vicinity of Kyoto central and not too far from our hotel. 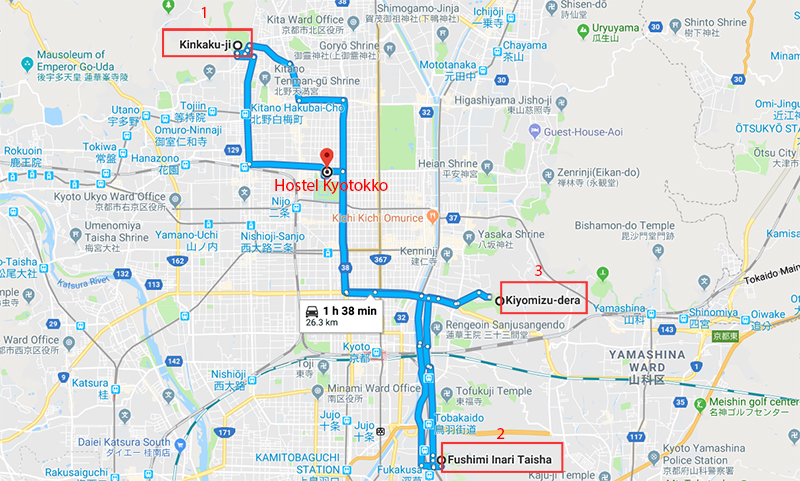 By end of the day
We visited all three temples, they were all lovely and very crowded. Each of them was slightly different from the other. Kiyozimu-dera was a bit disappointing, its main highlight (the main hall) was under cover as it  was under going renovation/maintenace.

In the evening we were still not tired so we added another destination, Nijo Castle park, to visit. Nijo Castle park was just behind Hostel Kyotokko so it was very convenient to walk over.

Breakfast at Kyotokko was a “joke”. It was practically a vegetarian breakfast! Plain white bread,  salad vegetable as filling and mayo dressing as spread. Not even an egg! Drinks were tea and coffee. It was the most pathetic free breakfast we had. I expected simple breakfast but not as minimal as this.

Though Hostel Kyotokko did not have onsite free parking we were prepared for it as staying at Kyoto Central meant paid parking. There was a carpark at the end of the street (not too far to walk) and it charged maximum of ¥200 from 8 pm to  8am, there after it was ¥100 for every 20 minutes. We left our car in the carpark at about 10 pm last evening and picked it up at 8.40 am this morning and the total charge was ¥400. 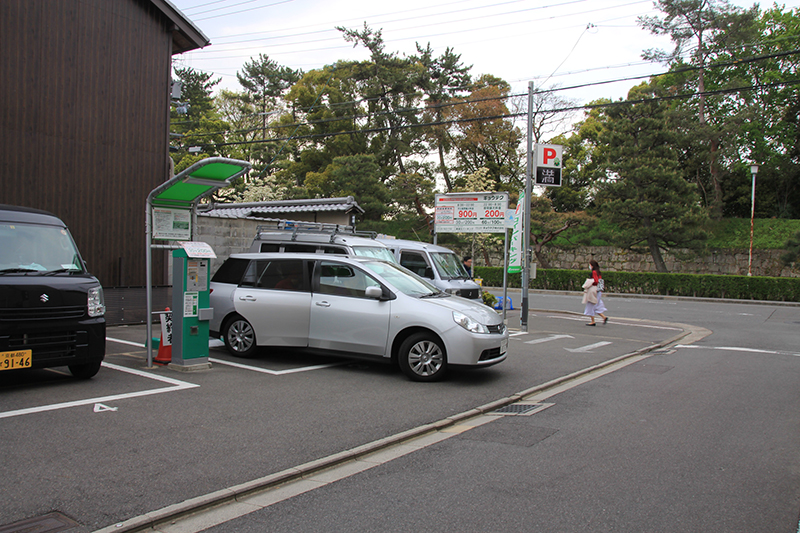 Paid carpark at the end of street of Hostel Kyotokko

It was a short drive to Kinkaku-ji (temple in Japanese usually had a ji, dera or in ending in its name), just about 5 km. We were early and parking was very easy. The parking charge was ¥600 per entry. The gate of the temple was still close but there already was a long queue waiting to buy entrance tickets. The entrance was ¥400 per person. 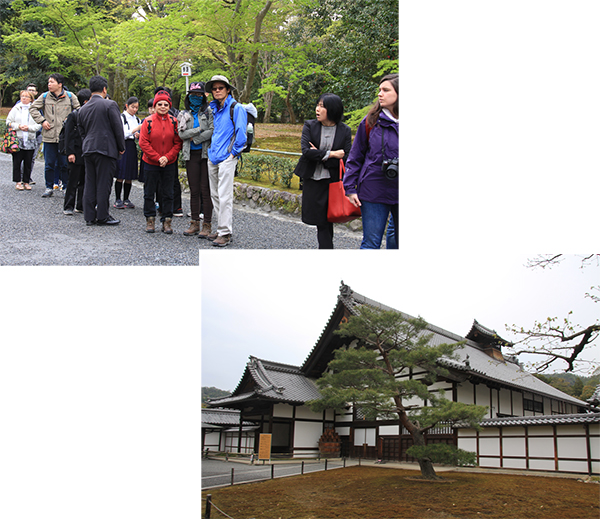 Long queue in the early morning at the entrance of Kinkakuji 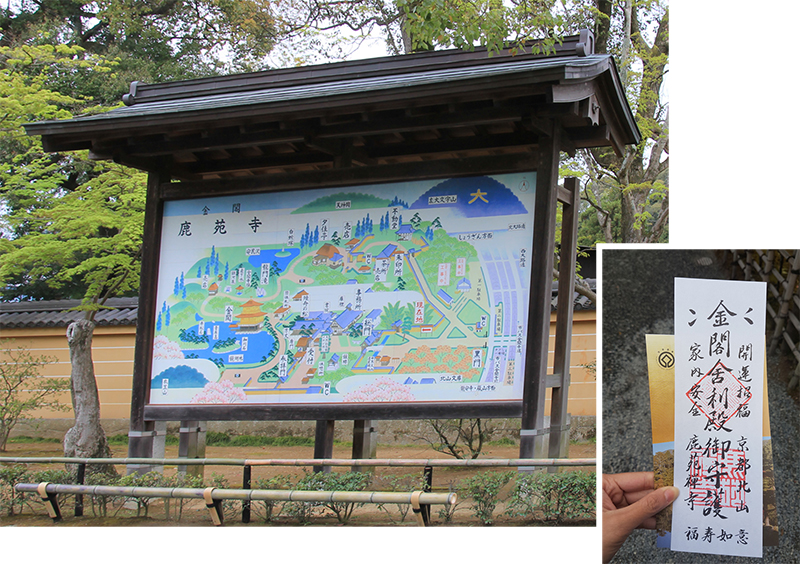 Immediately upon entering the gate we were channeled into an area where we had could have an unobstructed view of the Golden Pavilion. Though the sky was gloomy the vision of the pavilion was stunning. The water in the pond was so still that we saw two pavilions (one in the water). This golden pavilion was practically the mascot of Kyoto. It appeared in so many publications related to Kyoto. 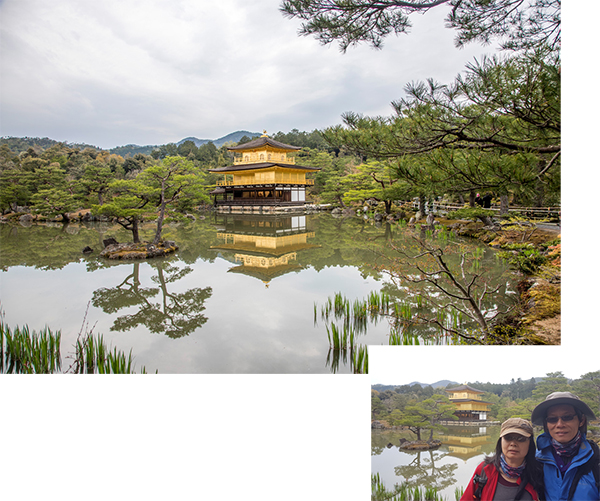 The park was not very big and beside the Golden Pavilion there were a few other structures. A teahouse, a shrine etc etc. We were at Kinkakuji in autumn and would definitely say that autumn was a better season to visit this place. The vivid stunning colors of autumn made the compound more alive and more interesting to explore. 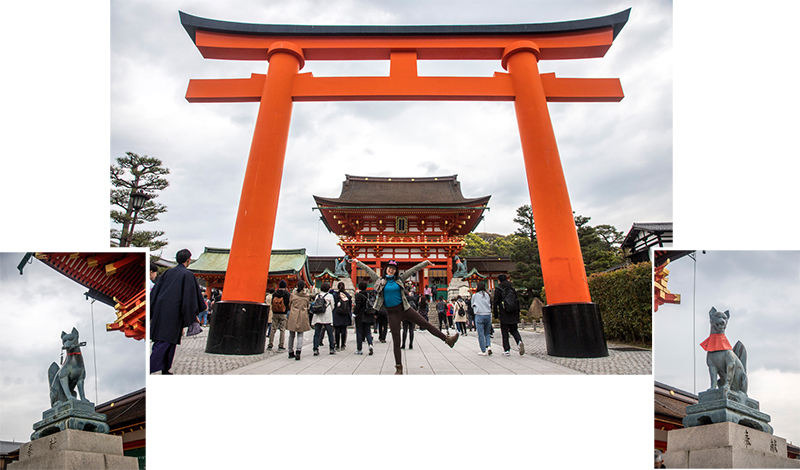 Torri Gate and Romon (behind)

At this shrine there were many fox statues this was because foxes were considered as the messengers to Inari, the god of rice. Inari was worshiped by merchants and businessmen which accounted for the huge and large number of donations given to this taisha. So Fushimi Inari Taisha meant a Taisha of Inari in the town of Fushimi 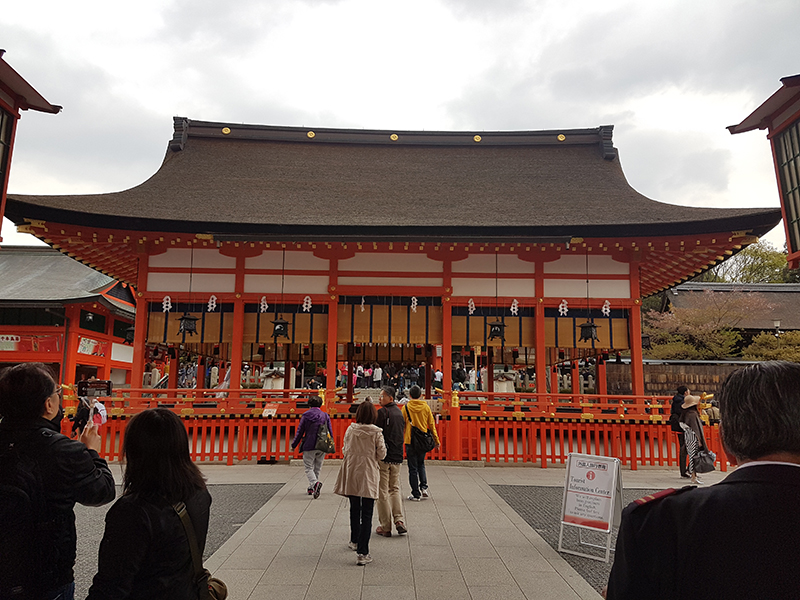 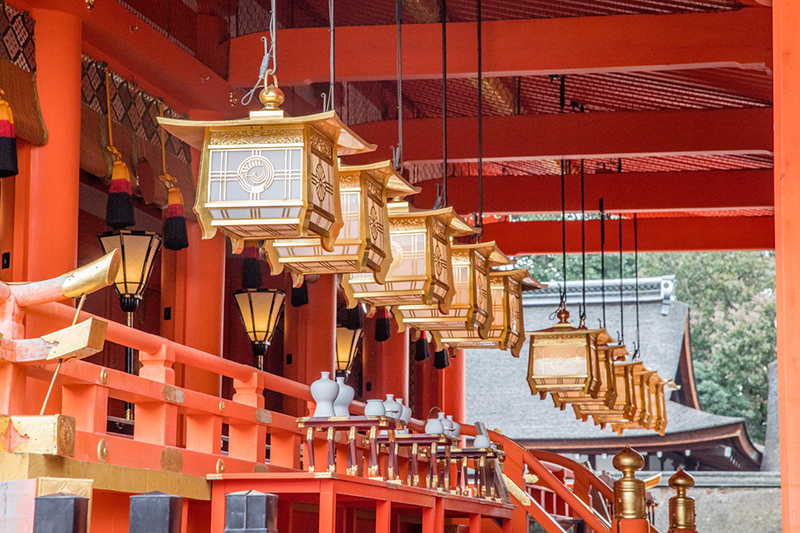 The highlight of this taisha was its 3000 over torii gates (senbon torii) that lined all the way up to Inariyama. Each torii gate was built on donation from an individual or organisation or a company, and I was told that the donee list was so long that it would be a five years wait before moving to the front of the queue. 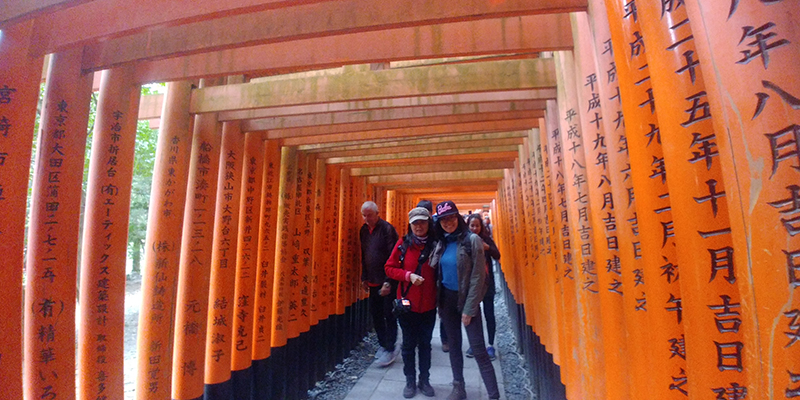 For lunch we went to a nearby Sukiya outlet. We purposely looked for one with free parking and found one about 2 km away using our google map. We ordered set meals which was either pork or beef. They came with egg, miso soup, rice and salad. Our meal was very delicious and it was not expensive at all. Four four meals the cost came up to only ¥2640. One thing for sure they did not have “seat charge”! 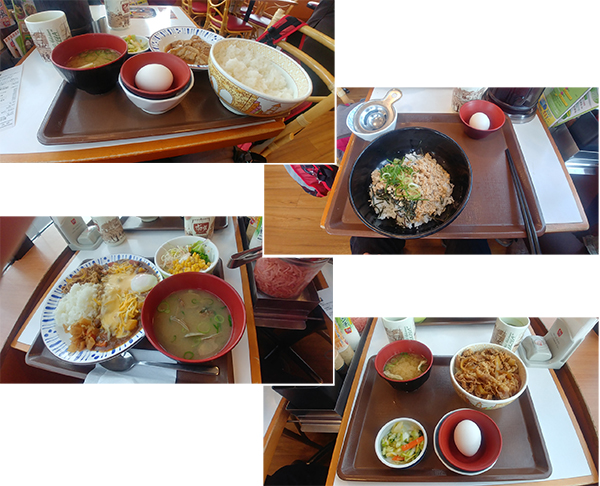 Yat Thong and I had been to Kiyomisu-dera many years ago and parking near the temple was a HUGE issue. This time even before we could reach anywhere near the temple the traffic condition was already very bad, traffic congestion everywhere. We tried to drive as near to the temple as possible but could not get near, the side roads that led to the temple was either one way road where we could not turn in or the road that was barricaded from vehicle. After looping a few rounds we parked our car in a carpark on a main road which about 700 metres from the entrance of Kiyomizu-dera entrance. 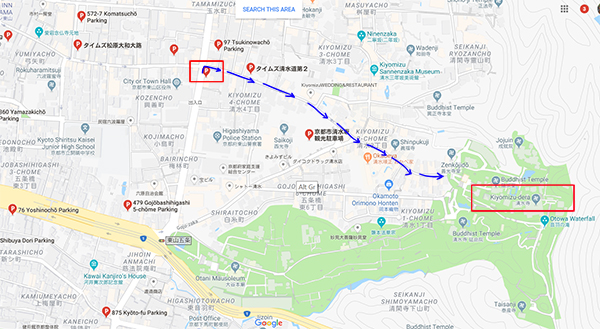 The 700 metres walk was very enjoyable and interesting. There was shops on both sides selling all kind of stuff. Ice creams, crepes, cakes, souvenirs, etc etc. A short while into the road it became a traffic free pedestrian walk. The place was crowded with visitors browsing through the shops. 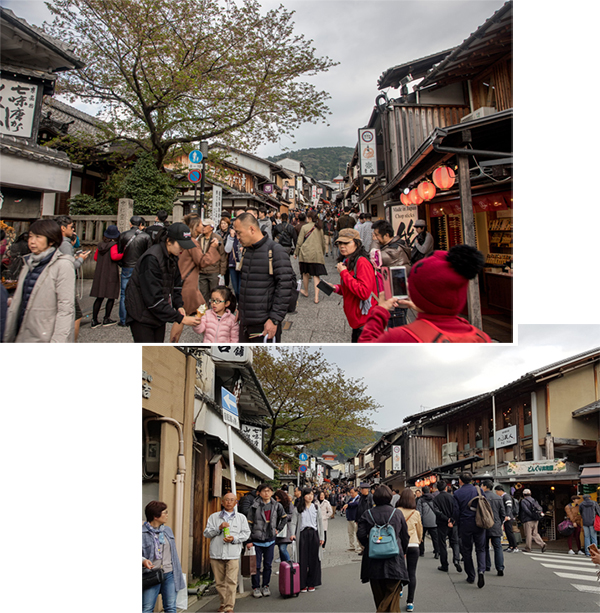 As we approached the entrance to the temple the human congestion got heavier. It seemed that everybody were routing to the same place. The first structure of the temple that came into view was Niomon (“mon” meant gate) a red, tall and huge structure. Further in was a three storied pagoda. 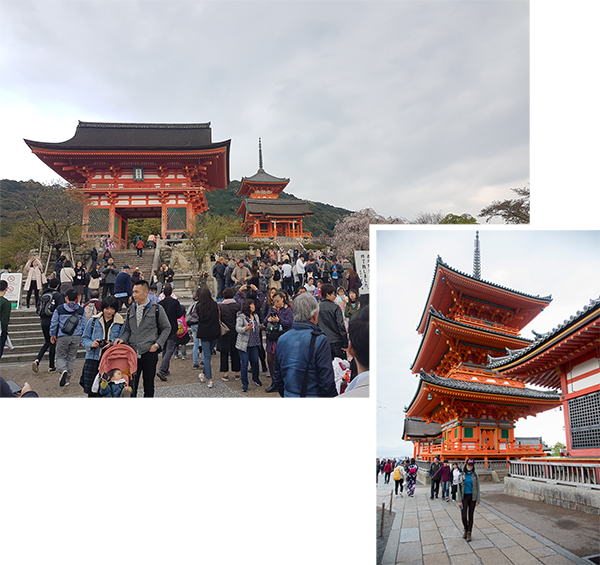 Niomon and pagoda at Kiyomizu-dera

It was unfortunately that the highlight of Kiyomizu-dera was undergoing maintenance. The main hall (hondon) was entirely wrapped up in black “netting”, so it was a “no go” there.

Nijo castle park was just directly behind Hostel Kyotokko and in its ground were some late-blooming cherry trees. Since it was within walking distance of our stay we did not fix a date to visit it. A visit would be either early in the morning just before we moved on to another destination or it would be the last destination of the day before we retired to our room in Hostel Kyotokko.

Nijo castle park was opened for day and evening viewings of cherry blossom. We left our car at the end of the street where Hostel Kyotokko was situated and walked over to Nijo castle park. It was about 10 minute to  6 o’clock in the evening and there was a long queue at Nijo castle park entrance. At 6 pm on the “dot” the ticketing booths opened for ticket sales. 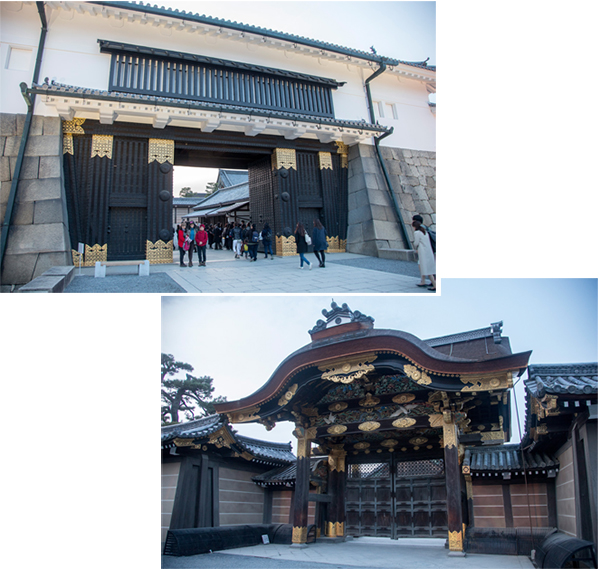 The tickets were ¥600 per person (no discount for senior) and went into Nijo castle park. The castle keep was off limited only the castle garden was opened for viewing. Usually the castle closed at 6 pm but during cherry blossom season it was opened again at 6 pm for night viewing of cherry blossom.

For visitors who arrived late in Kyoto and missed the “cherry blossom season” of the main sites, could consider visiting Nijo castle park where some late-flowering cherry trees could be found. 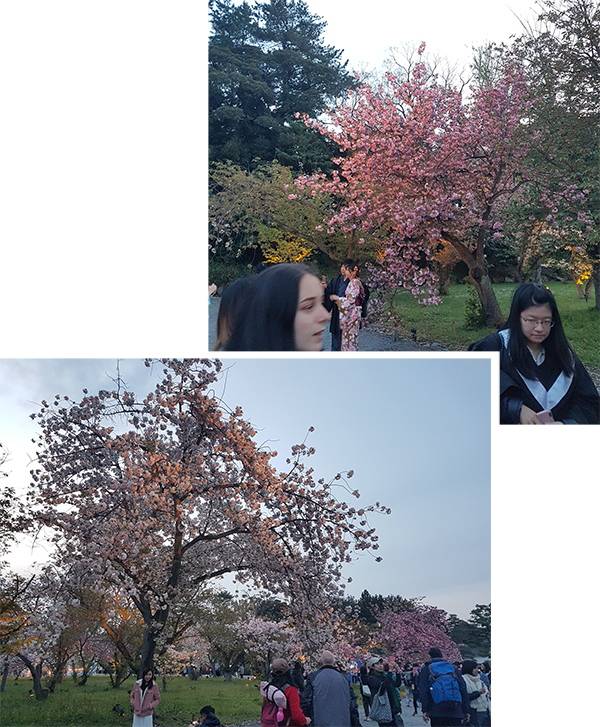 The walk in the park was pleasant, there were cherry trees some with lighter pink flowers and other with dark pink ones. Overall it did not have many trees or flowers till the whole sky was “block out”. 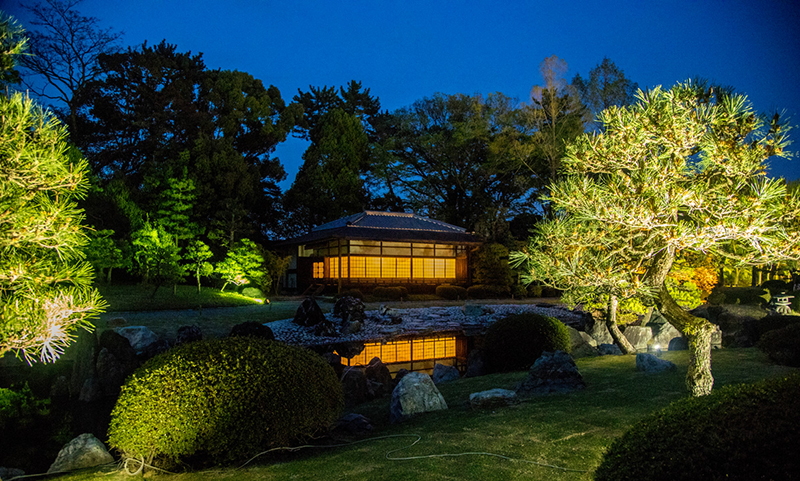 We had dinner at Matsuya (松屋), a food chain that was similar to Sukiya that served quick tasty meal. Yat Thong and I loved meat and port belly was our favourite so we ordered pork belly meal at Matsuya. Four meals at Matsuya came up to ¥1600 only, it was even cheaper than Sukiya and Sukiya was cheaper than CoCoIchibabya which was cheaper than standard restaurant.

The Matsuya outlet was just a short short walk away from Nijo Castle and also near to Hostel Kyotokko. 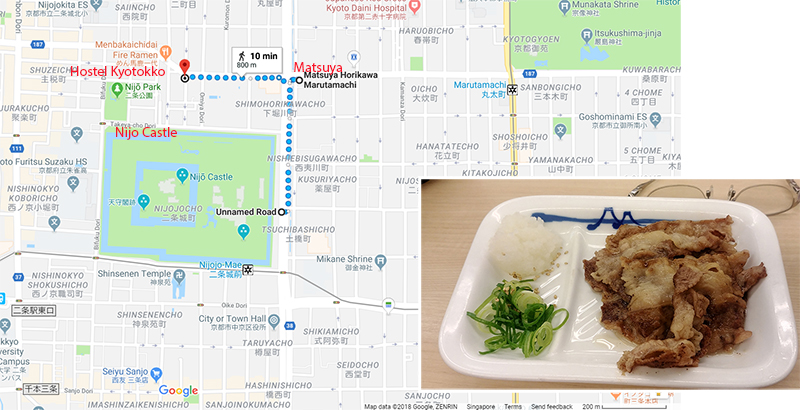