Today we were leaving Kyoto and were only too glad as we were not particularly fond of our family room at Hostel Kyotokko. In the morning we would drive down to Arashiyama to visit its bamboo forest. In the afternoon we would drive down to Osaka where we had booked a studio apartment for the night. Our apartment was near Osaka Castle so we could go down for a visit. In the evening we planned to drive to Kobe for our  “long anticipated” wagyu beef at La Shomon.

By end of the day
It was a nice outing at Arashiyama bamboo forest. This forest provided a different experience as compared to all the temple, shrine and cherry blossom viewings in the last few days. We did not visit Osaka Castle as we figured its cherry blossom was long gone so for a change of scenery we visited Dotonbori, Osaka famous gastronomist town. In the evening we were at La Shomon for our long awaited wagyu beef. Two years ago we were at La Shomon, two years later we were back and its wagyu beef was absolutely fabulous!

This time we were prepared for the unappetising breakfast. We had bought two cans of tuna and with the bread, salad and mayo dressing from the hostel we made delicious tuna sandwiches! After breakfast we checked out of Hostel Kyotokko and picked up our car at the end of the street. This time round the parking fee was a whooping ¥1100. We had parked there since 5 pm the evening before.

We were at Arashiyama area where the bamboo forest was located at about 9 am in the morning. The road was not so congested yet which allowed us  to spend some time looping around the vicinity looking for a reasonable priced carpark. The carparks nearest to the forest were very expensive so we parked some 750 metres away.

The carpark charged a maximum of ¥600 which was half the price of many other carparks nearer the bamboo forest walking trial. Though the walk was 750 metres it was a scenic walk, we strolled past the wide Katsura River with Mt Arashiyama as a backdrop. At the bridge (渡月桥) we turned right on to a road with shops on both sides selling souvenirs, ice creams, food etc. We bought some souvenirs for family back home.

There were many visitors at the bamboo forest. Some came by bicycles, other came in rickshaws and many other on foot. 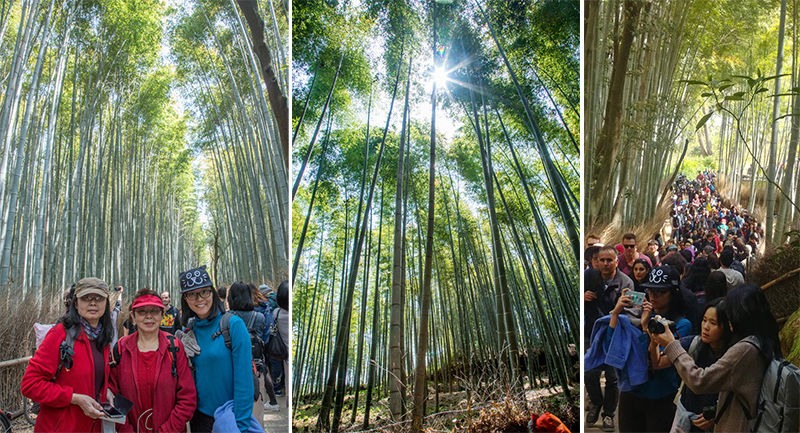 The not so “tranquil” bamboo walking trail was packed with people! We were practically rubbing each other shoulders. The only places we could take a photo of a people-less trail was the off limit trail specially used by paid rickshaw! 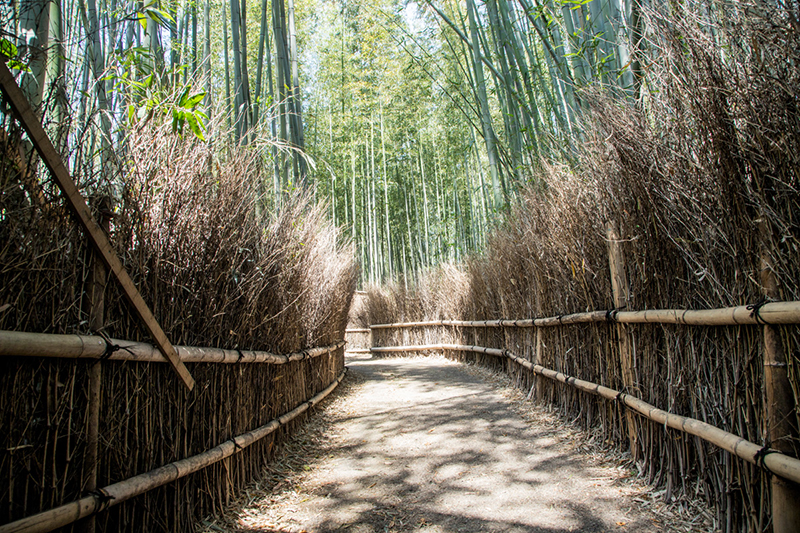 A off limit trail used by paid rickshaw

We left Kyoto and headed towards Osaka in the afternoon. Along the way we decided not to visit Osaka Castle as its cherry trees would have long shedded their flowers. Instead we decided to head to Osaka famous Dotonbori area where tons of restaurants and eateries could be found. A food heaven! We managed to turn into a side road and found a “multi storey mechanized” car park where we left our car with the attendant. The parking charge was ¥300 for every 30 minutes. Though the charge was very pricey we had no other alternatives as the roads were pretty congested and looping around for another cheaper car park was not an option.

Park just outside Dotonbori and walked

A short walk took us into a “cover” pedestrian walkway with shops everywhere . We walked further on and came to Ebisu Bridge. On the bridge we could had a clear view of Dotonbori river. On one side of the river was an amusement park and its yellow ferris wheel.

After crossing the bridge we turned into another pedestrian walk. On both sides of the walk were crammed with all sorts of food restaurants. There were those that sold lobsters, other sold octupus or gyoza etc. It was a very colorful and eye “popping” street. 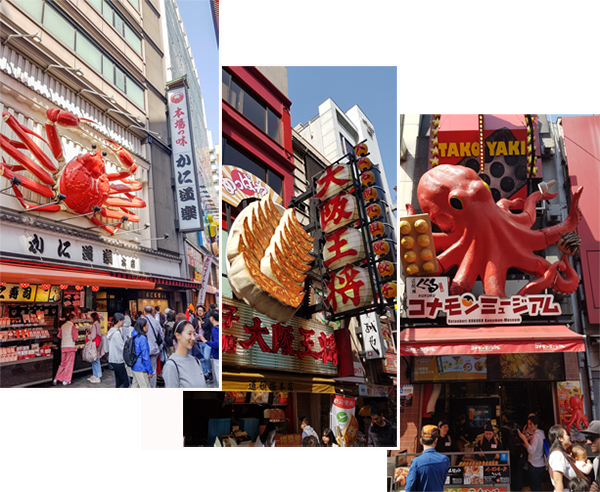 Shops with gigantic representation of their products on Dotonboric Area

Lin Ying had already decided that she was here for Melon Pan Icecream, whatever that was I was game to try. We found the famous melon pan icecream van and ordered two ice creams, a normal one and a melon one. 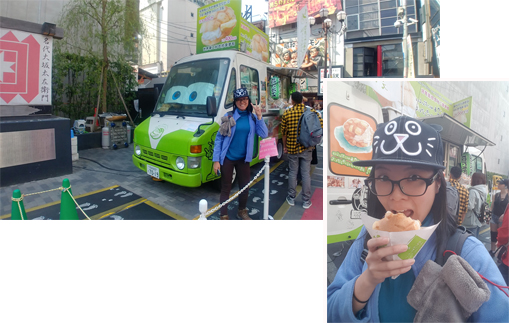 When I received my pan icecream I was disappointed. It was just vanilla ice cream in a pastry puff. As for Lin Ying, her melon pan icecream was vanilla ice cream with orange syrup (melon syrup?) in the same type of pastry puff. Mine costed ¥400 and Lin Ying’s  ¥700 (¥300 more for some orange syrup over the icecream!) We had eaten similar concoction  in Kampar, Malaysia and it costed  MYR$2 (equivalent of ¥55). Though the Kampar icecream puff was half the size of the Melon Pan Icecream, its pastry and icecream were comparably good.

It was difficult to walk along such a food street without feeling hungry and soon we stopped for ramen at Kinryu Ramen, a long established ramen shop in Osaka. Interestingly this ramen shop provided free flow of kimchi condiments, nice…. 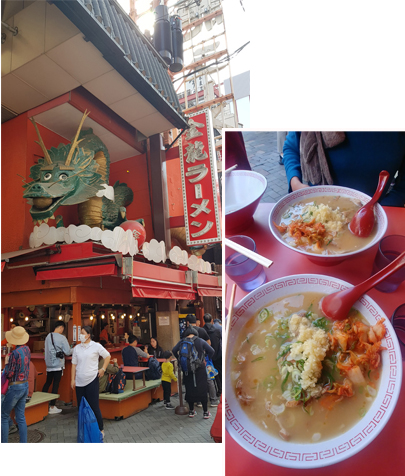 La Shomon was a wagyu restaurant. We visited it two years ago based on reviews by customers on the web. At La Shomon we found the wagyu beef great and price very reasonable. So this visit we purposely made La Shomon one of our must visits. We drove all the way from Osaka to La Shomon which was an hour drive. This time we parked at a less expensive car park which was about 250 metres away. 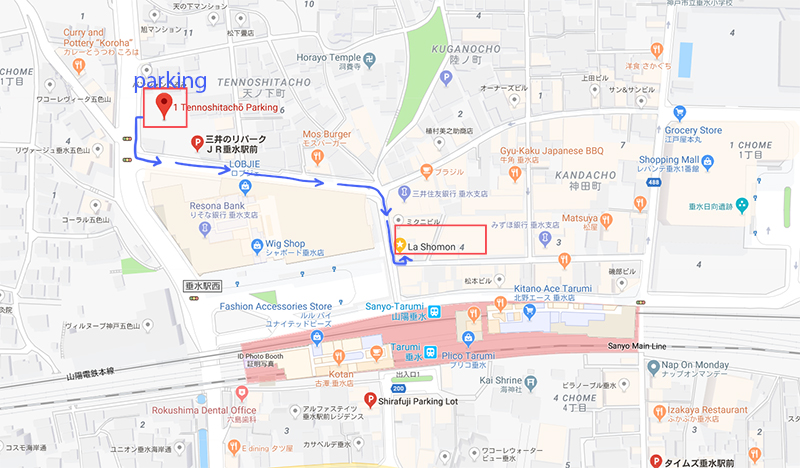 Parked and walked to La Shomon

La Shomon was on the second level above Lawson and its main door was on a side lane. We went up and was greeted by LauraLee a half owner of La Shomon. LauraLee and her husband owned La Shomon.  Though Laura was busy we managed to catch up with some parts of each other lives that when on the last two years. 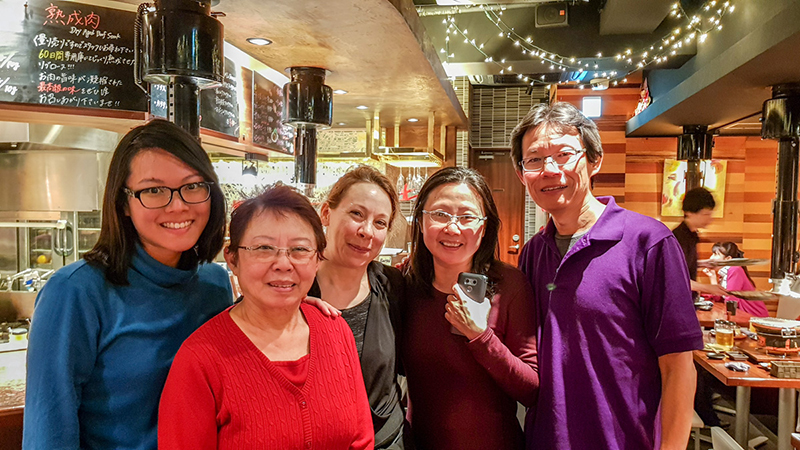 LauraLee of La Shomon and Us

Laura after finding out our preference recommended the Gourmet Set where we could taste the different parts of a cow. We also ordered the cured beef which by the process of the curing was richer in taste. We had fun bbq-ing the beef and savouring it. We loved the beef so much that we ordered another round of Gourmet Set. 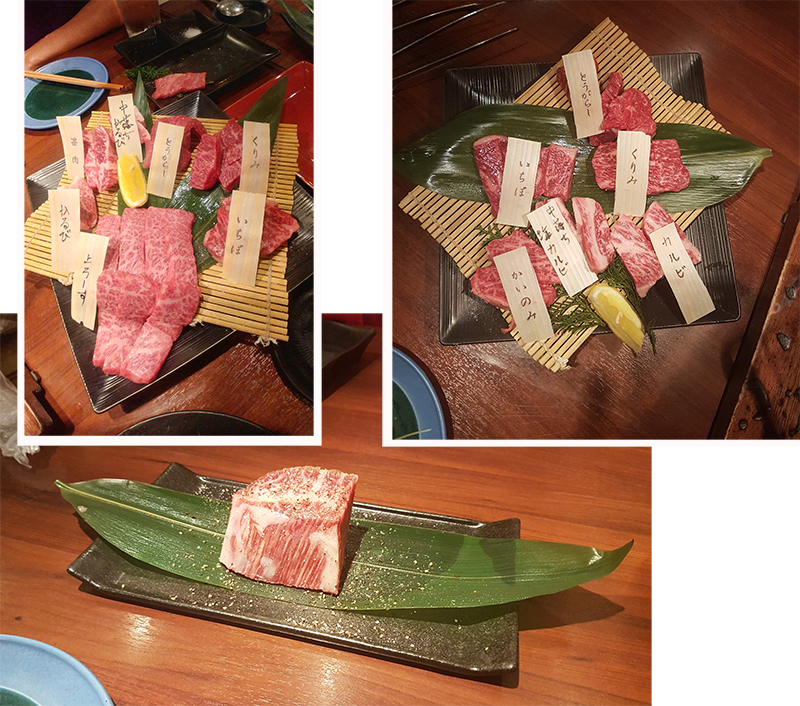 We got to cook the beef slices on our own as for the cured beef, Laura told us it would be prepared by the her. The cured beef was wrapped in foiled and cooked three times, after each time it was left to cool. 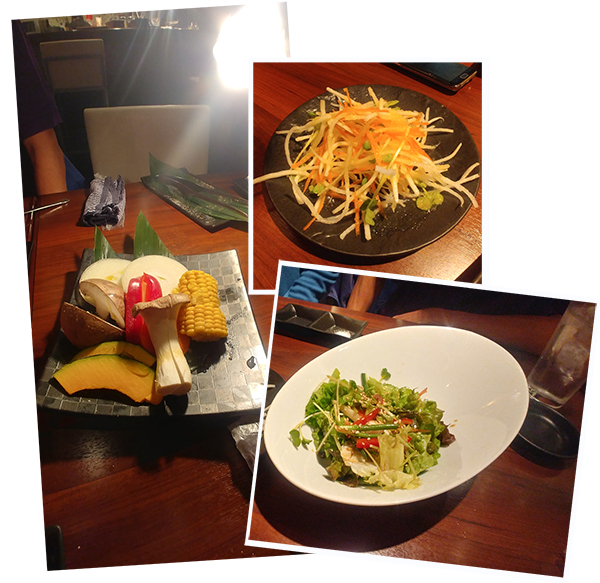 Salads to go with the rich beef

At the end of the meal we had green tea ice cream. The whole bill for four came up to ¥15242, a pretty good price for wagyu meals. 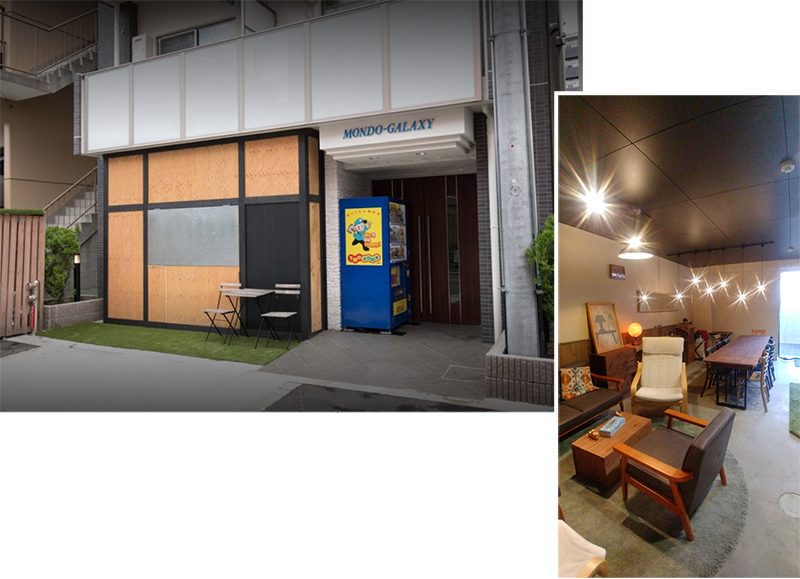 Galaxy Apartment and the common lounge for customer at the ground level.

This apartment was a self-checkin apartment where security code and key code to the apartment was sent via email. Everything in the studio apartment felt new. The kitchen equipment, the washing machine, the toilet, bath and basin. The studio had a kitchen that came with good size fridge, cooker, hop, microwave, kettle. The sleeping room was separated from the kitchen by a sliding door and it had three beds and a pull out. The room had a balcony with huge glass doors the light coming through the white thin curtain made the room bright and cheery. There was also free wifi. 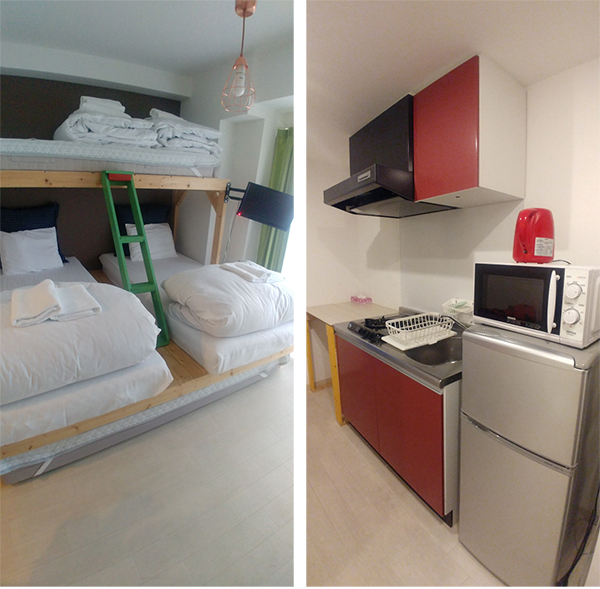 The bath, toilet and wash basin were in separate compartments, these made it easy for four persons to use them without waiting for each other.

The best part of this studio apartment was it price, it costed ¥10425 per night. Though this apartment did not come with onsite free parking there were several carparks near it. Some costed cheaper by the hour,  some had a lower maximum day cost while other had a lower maximum night cost. So we parked our car at the carpark on the same street as Galaxy apartment in the day and in another carpark a street away in the night after we came back from dinner at La Shomon